Harley-Davidson has released details on its 2021 range. And there are more than a few surprises…

While we’re all glad to see the back of 2020, Harley-Davidson has to be more pleased than most to have the past year in their rear view. With a CEO departing, a future strategy abandoned and ongoing market decline, 2020 had been particularly egregious year for the all-American company – even before COVID-19 became a factor.

The arrival of 2021 presents an opportunity to move forward, and Harley claim they’re doing exactly that in announcing a new strategy for the new year.

To give some background to Harley-Davidson’s current situation, the company had been forging ahead with the ‘More Roads to Harley-Davidson’ campaign until last year. Under CEO Matt Levatich, ‘More Roads’ was launched in July, 2018, with some very bold goals, including 100 new models in 10 years, growing Harley’s US market by 2 million riders and expanding international sales to account for 50 per cent of total business.

However, a string of poor sales figures (including the company’s lowest annual sales for 16 years in 2019), meant that when Levatich was ousted in February, 2020, most of the More Roads programme went with him. In its place, new CEO (and former H-D Board director) Jochen Zeitz announced ‘The Rewire’ plan to overhaul Harley’s operations.

Starting with basic improvements in inventory and delivery, The Rewire also aimed for a return to the brand’s strengths, ie. cruisers and large tourers, and a focus on core markets, ie. the USA, rather than diversification into new models and new markets.

“Despite the pandemic, the team at Harley was able to come together and truly focus on what is important to our riders and to our community,” said Zeitz at the 2021 virtual launch on 19 January.

“Harley-Davidson is here for you. We’ve been listening. We’ve worked hard to prioritise the things that matter to you.”

With ‘The Rewire’ completed in January, it’s now time for a new five-year strategic plan - ‘The Hardwire’. Details are yet to be fully revealed, but some of the goals under ‘The Hardwire’ are just as ambitious as those under ‘More Roads,’ including double-digit sales growth in 2021, followed by single-digit annual sales growth and increased profits through to 2025. 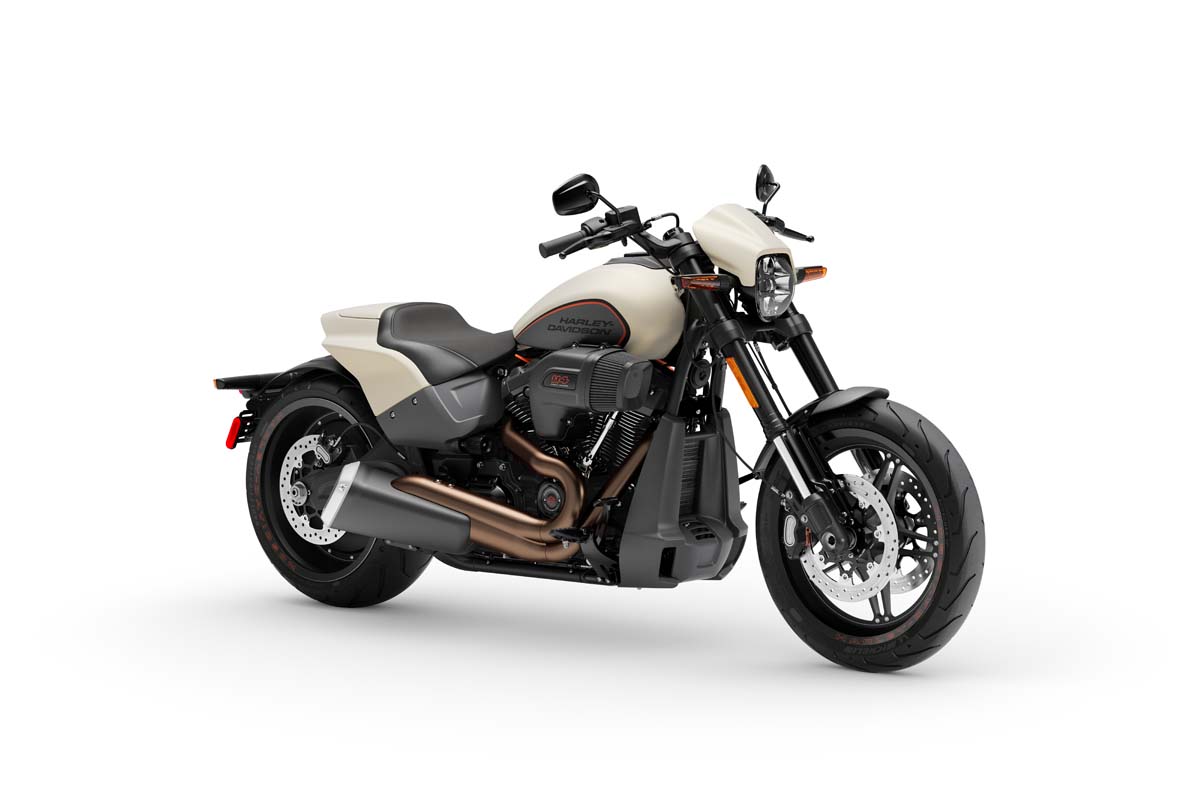 Based on overseas reporting, other takeaways from ‘The Hardwire’ plan include moving the company's electric motorcycle programme (that delivered the Livewire) to a separate division with its own management team who will be encouraged to explore partnerships with other companies. Partner companies will also be sought for other future opportunities, including a “premium” low displacement model.

Some of the other diversification initiatives under ‘More Roads’ will stay in place under ‘The Hardwire,’ so the Pan America adventure tourer is going ahead (due for global launch in February), along with the ‘Custom 1250’ sports model. Harley’s small e-Bikes appear to have escaped the axe, too, and will likely be folded into the upcoming electric division, but is looks like the ‘Bronx’ streetfighter may be a casualty of the reorganization.

In terms of the 2021 Harley-Davidson range for Australia – at least those we know about so far – it’s mostly familiar stuff, but there have been culls (see What’s Out?).

Within the existing Sportster, Softail, Touring, Trike and CVO families, there’s no all-new model for 2021, but Harley are billing some updated and modified models as such. An example of this is the Street Bob 114, which is essentially the 2020 Street Bob, but with the Milwaukee-Eight 107 v-twin replaced with the 114 cubic inch version. 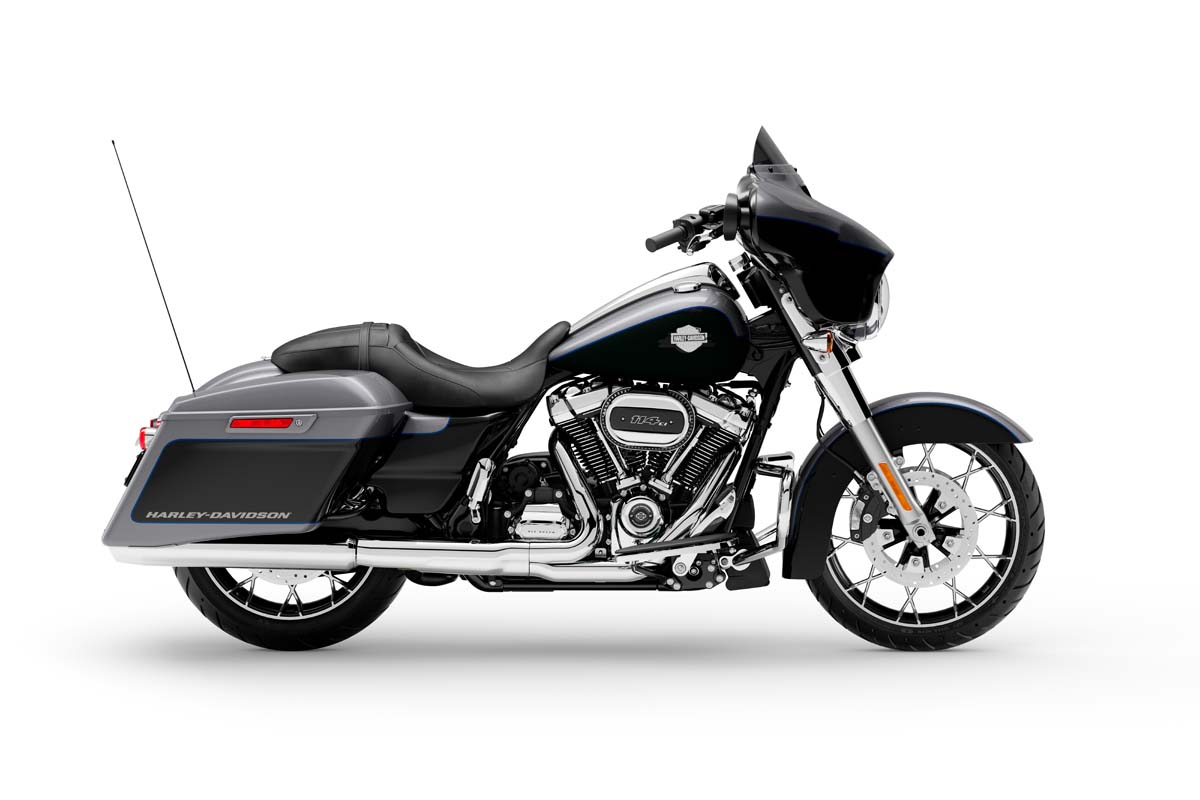 The same approach has been taken with the Fat Bob and Fat Boy, both of which could be had with either Milwaukee-Eight engine last year but are now only available with the 114.

The other noteworthy addition – if you can call it that – is chrome. Old fashioned, bright and shiny chrome has made a comeback on the Fat Boy and selected Touring models. There’s also the usual new selection of new paint options, finishes, badging and wheel styles across several models, as well as new upgrade kits and accessories.

Leading the accessory updates is a new audio system created in partnership with Rockford Fosgate. Described as a “new level of motorcycle audio performance and customization,” the system features motorcycle-specific componentry and high-efficiency amps that draw less electrical power.

Available in Stage I and Stage II forms, offering amps rated at up to100W per channel and up to 150W per speaker, the ‘Harley-Davidson Audio powered by Rockford Fosgate’ sound system is standard on the 2021 CVO Street Glide and CVO Road Glide, but can also be fitted to 2014 and newer Touring models with the Boom! Box infotainment system.

Also new for 2021 are ‘Hammock’ and ‘Sundowner’ heated/cooled seats for Touring and Trike models, LED indicators and rear lighting for selected Softail/Dyna/Touring models and a universal smartphone cradle.

For Softails, there’s a new Screamin’ Eagle high-flow exhaust system and ‘Stage III’ engine upgrade kits that boosts capacity on 107 engines to 119ci and on 114 engines to 122ci.

New safety features for 2021 include standard LED headlights across the Touring lineup, while the Reflex Defensive Rider System (RDRS) introduced for 2020 has been rebadged as ‘RDRS Safety Enhancements’ and expanded to all CVO and Trike models, as well as the Livewire. The updated system is optional on the Touring family.

The “enhancements” tag for the latest version of RDRS refers to the addition of cornering specific functionality to the ABS, linked braking, torque slip control (ie. engine braking) and traction control systems. There’s also a new hill-hold function and tyre pressure monitoring. On the 2021 Trikes, RDRS Safety Enhancements are specifically tuned to suit those models.

The biggest omission from the 2021 range is the Street 500, which has been one of Harley’s most successful models in Australia since its local launch in 2015, with 838 units sold in 2019 alone, despite a pricetag that put it at the top end of the LAMS market.

Discontinuation of Street 500 and related Street 750 may seem an odd move, but it was necessitated by the closure last September of Harley-Davidson’s manufacturing operations in Bawal, India, where both bikes were built. That closure was the result of Harley failing to crack the lucrative low- and medium-displacement market in India that the Street range was primarily created for.

Removing the Street 500 from the local lineup means that Harley-Davidson no longer has a player in the LAMS market, but as indicated in future planning under ‘The Hardwire,’ a low-displacement model may return in some form in the future.

In terms of other omissions, the 2021 Sportster range has been halved, three variants have been removed from the Softail family and two from the Touring family. The Trikes and premium CVO offerings carry over with the same model variants from 2020. See the individual model family summaries for more details.

What’s also out on the big Touring models is an hydraulic clutch. This has been attributed to customer demand for the return of a cable clutch. Since its introduction, the hydraulic clutch has been subject to multiple recalls.