Production of Yamaha’s SR roadster will finally come to an end this year - bowing out after 40 years - with an SR400 ‘Final Edition’ that will be exclusive to the Japanese market.

The original SR was a 500cc model, launched in 1978 and based on the XT500 thumper four-stroke trail bike. A 400cc version was added to suit Japanese registration requirements.

Even when it was new, the SR was considered something of a throwback, with air cooling, carburettor induction, kick starting, spoke wheels and a drum rear brake.

That simplicity soon became the SR’s greatest selling point, particularly in Japan, with the local market steadfastly refused to accept “modern” updates, so an electric starter was never offered and fuel injection only added in 2010.

In Australia, the SR500 was sold for only a handful of years before being discontinued in 1982, but a steady trickle of grey imports since then ensured it remained in the local consciousness. It was a similar story in Europe and North America, lasting only until the early ‘80s.

Production of the SR500 ended in 1999, but the SR400 continued, primarily for the Japanese market.

As the custom motorcycle scene boomed in the new millennium, the SR’s inherent simplicity made it a favourite for countless café racer conversions, both here and abroad, to the point that it’s hard to find an SR500/400 for sale these days that ISN’T customised.

Renewed interest in the SR400 led Yamaha Motor Australia to start official imports from 2014, but within a few years it was discontinued locally and has been mostly a Japan-only model since.

The end of SR400 production will be marked with a Final Edition that was announced in January and will be released in March.

Two versions have been revealed – a ‘standard’ and a ‘limited,’ with just 1,000 units of the latter to be built.

The regular Final Edition will be offered in a choice of two colours, dark grey and blue, each with unique details.

Inspired by the finish on SR400s from the early ‘80s, the dark grey SR400 Final Edition features a contrasting silver scallop on the tank, outlined in black and carrying subtle ‘Final Edition’ script. A similar contrast paint treatment is added to the tail panel, while the side covers carry the distinctive ‘SR’ badge that’s been a feature of the SR400 for decades.  The seat is trimmed in two-tone grey vinyl and there’s a classic Yamaha tuning fork badge on the tank.

The blue SR400 Final Edition features a sans serif Yamaha tank badge and brown seat upholstery. The side covers on this version carry a decal with SR Final Edition, ‘The Big Single’ and ‘Since 1978’ identification. 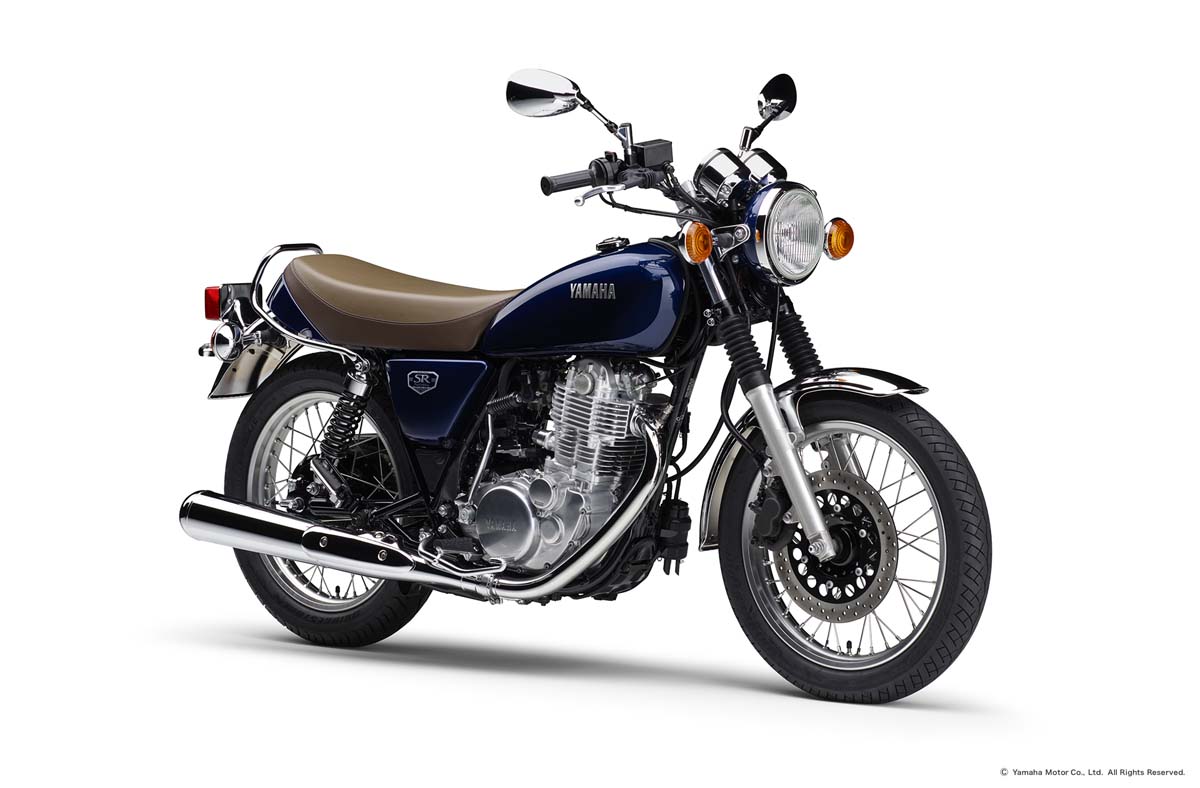 Paint and trim differences aside, each Final Edition is the same mechanically, with a 399cc air-cooled SOHC single-cylinder 4-stroke engine, 5-speed gearbox and semi double-cradle frame.

Official release for both versions of the SR400 Final Edition will be on 15 March, 2021, but the entire 1,000-unit allocation of the Limited has already been accounted for, selling out by the start of February.

Neither version of the SR400 Final Edition will be released in Australia, but the determined enthusiast could likely source one individually or via specialist importers.