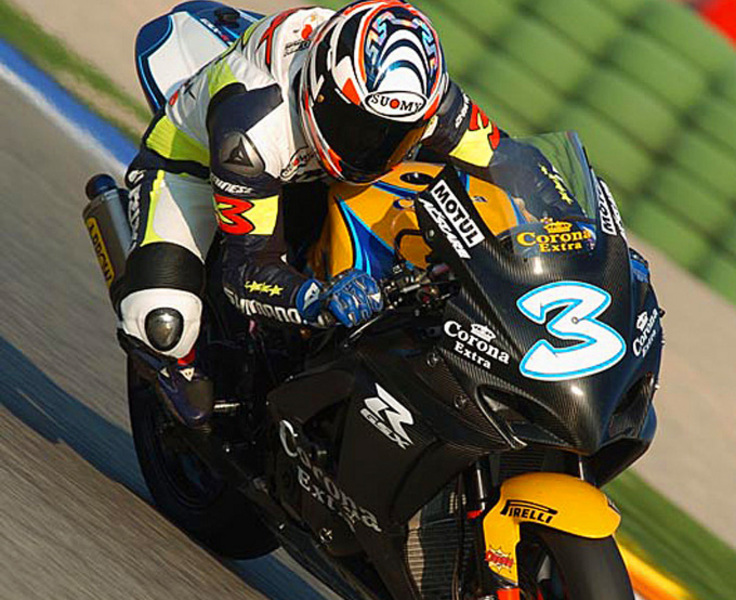 The Pirelli test at Valencia in mid-November marked the first time Biaggi's pace could be directly compared with that of the leading SBK stars. The top teams from each of the five SBK manufacturers - Ducati, Honda, Suzuki, Yamaha and Kawasaki - was present in Spain for the two-day test, in which Ten Kate Honda's James Toseland was fastest on day one. However, Biaggi improved by a substantial 1.3secs during the second and final day, placing the former four-times 250cc World Champion fastest of all as he lapped 0.2secs clear of Xerox Ducati's Lorenzo Lanzi. Impressively, Biaggi didn't use qualifying tyres but his best time, of 1min 33.9secs, was well inside all official lap records.

"Today I wanted to push the bike to the maximum so that I could give lots of information to the Japanese technicians so they can work well and improve the bike. I think I did that", Biaggi said. Biaggi's best time of 1.33'9 was equalled by Lorenzo Lanzi, although the Xerox Ducati rider used qualifying tyres to do it. Biaggi's Alstare Suzuki team mate Yukio Kagayama finished third overall, Troy Bayliss fifth, while 2005 champion, Troy Corser was seventh fastest on the Yamaha Italia R1. "Yesterday I spent quite a bit of time on the 2006 bike and only did a few shakedown laps on the new bike, whereas today I got down to the business of working with the new bike," confirmed Corser. "I think that to finish the day and be so close to the fastest guys with a new bike is very good and I'm pretty happy about that." Corser commented at the conclusion of the Pirelli test.