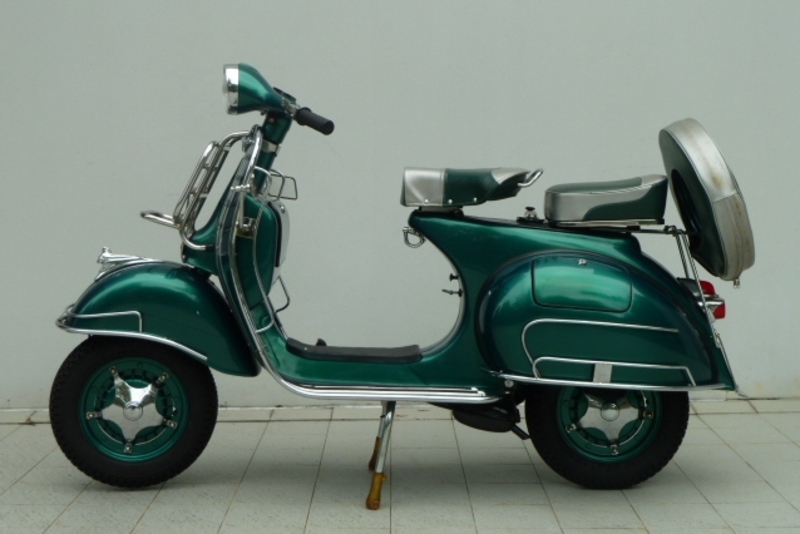 Both examples have been restored, but given a modern edge in the form of metallic paint and some highly-polished chrome features
Vespas are the ultimate classic scooter, offering practicality and inner-urban cool that virtually every manufacturer since has tried to copy. At Shannons Sydney Summer Classic auction this February 20, two examples of the iconic Italian commuter will be offered for sale at No Reserve.

Both examples have been restored, but given a modern edge in the form of metallic paint and some highly-polished chrome features. The older of the two is a 1964 model, and is finished in a deep metallic green, with the 'chrome & green' appearance continued on the rider and pillion seat. The rear-mount spare tyre comes with its own cover, stencilled with the Vespa logo. Guiding range is $3,000 - $5,000.

The second Vespa is a 1965 model, but like its companion, is also a 150cc unit with 4-speed manual transmission. Restored to the same standard as the '64 model, the newer Vespa is finished in a striking red & black colour scheme, which is repeated in the trimming on the seats. A sissy bar carries the spare wheel as well as a backrest for the pillion passenger. Guiding range for the red & black Vespa is also $3,000 - $5,000.

Both these scoots offer bags of style, combining the classic Vespa look with some modern touches and finishing. At time of writing, the two No Reserve units were the only motorcycles consigned for the Shannons Sydney Summer Classic Auction, which takes place on February 20, at Shannons Sydney showroom, 65 Reserve Road, St Leonards, NSW.

For further details, go to www.shannons.com.au