Colour and graphics package to be available on Rocket 3 R and Rocket 3 GT for one year only.

Following the Rocket 3 R Black and Rocket 3 GT Triple Black that dropped in early 2021, Triumph have announced an all-new exclusive variant for 2022 – the Rocket 3 ‘221 Special Edition’. 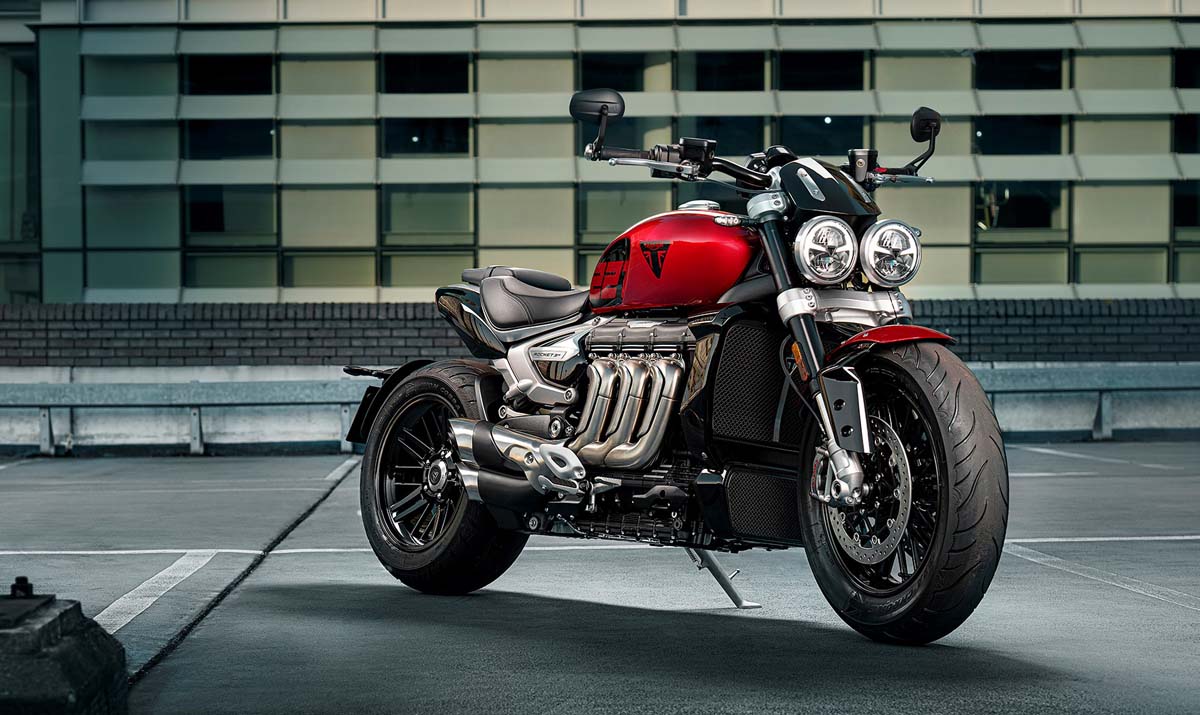 To be available on both the Rocket 3 R and Rocket 3 GT, the 221 Special Edition takes its name from the Triumph power cruiser’s maximum torque figure – 221 Newton Metres – that’s not only class-leading but also the highest of any volume production motorcycle. 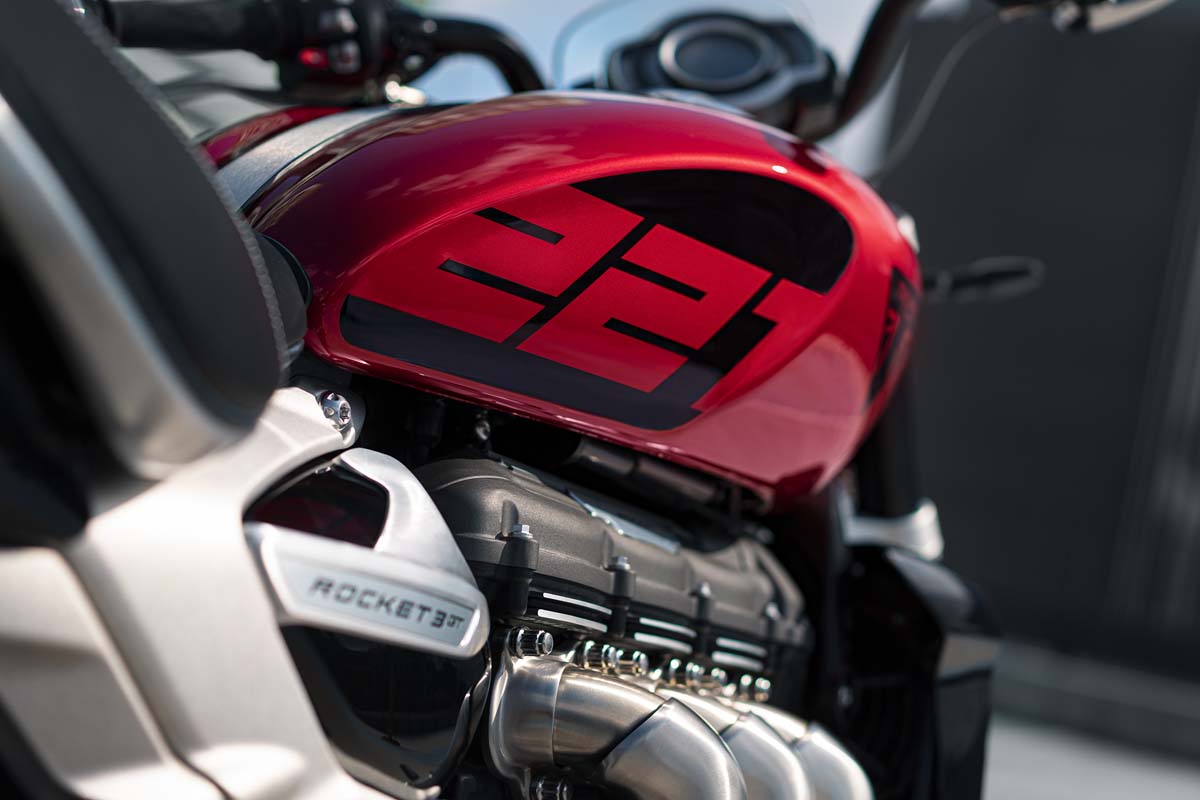 That 221 number is represented graphically on the fuel tank’s knee cutouts, while the top of the tank features a rundown on the Rocket 3 specs, including engine capacity (2458cc), bore, stroke, power output (in European ‘Pferdestärke’ measurement) and that all important torque number, as well as a reminder that what you’re riding was manufactured in Hinckley, UK - the home of Triumph Motorcycles. 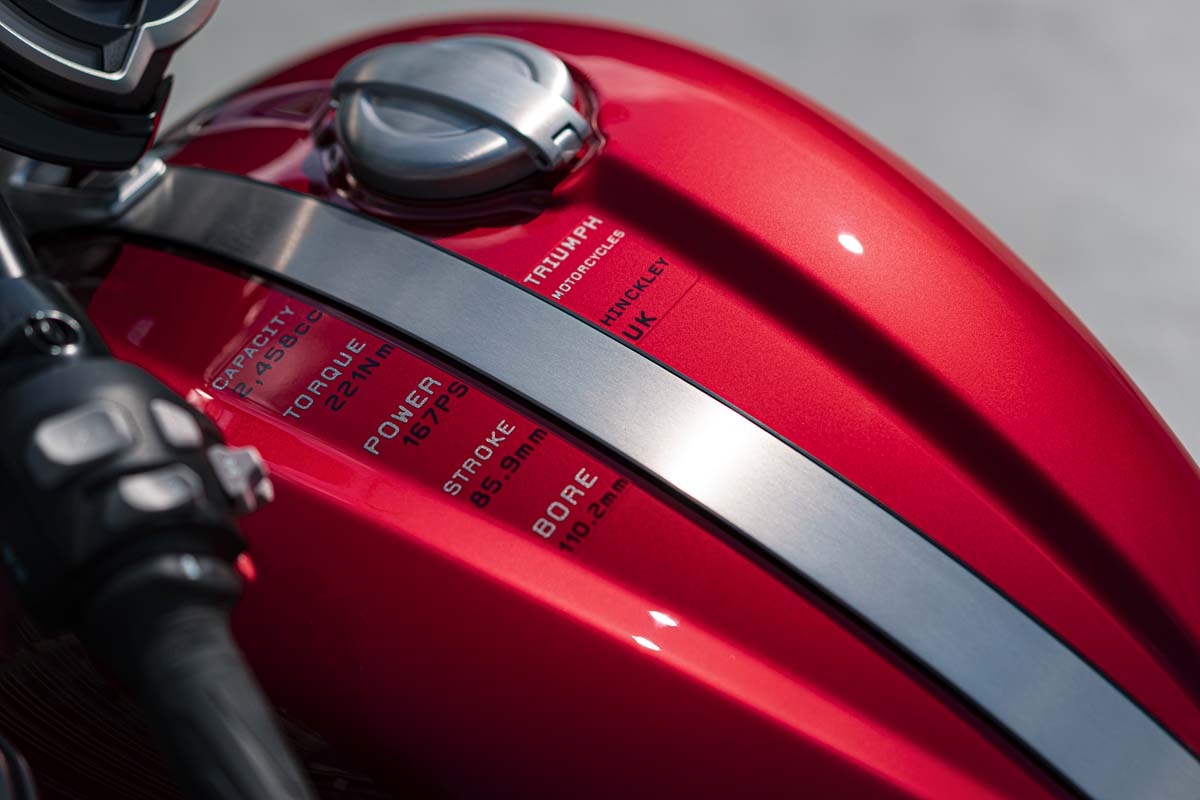 The tank also carries the Triumph ‘shield’ graphic (instead of the script graphic) and is finished in Red Hopper paint that was recently offered on the Bonneville Speedmaster. The front mudguard gets the same rich candy Red Hopper finish, while the front mudguard brackets, radiator shrouds, flyscreen, headlight shells, side covers and rear mudguard are finished in Sapphire Black. 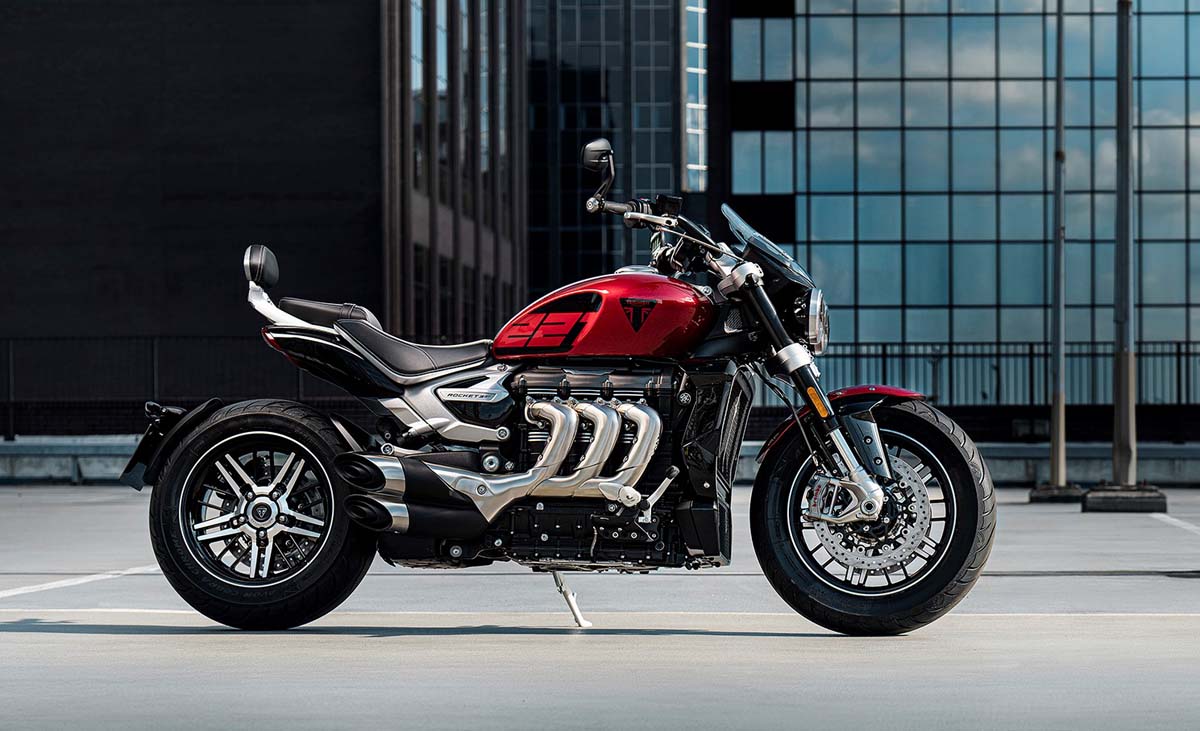 This colour scheme is the same on both the R and GT versions of the 221 Special Edition, and is also the only colour available. 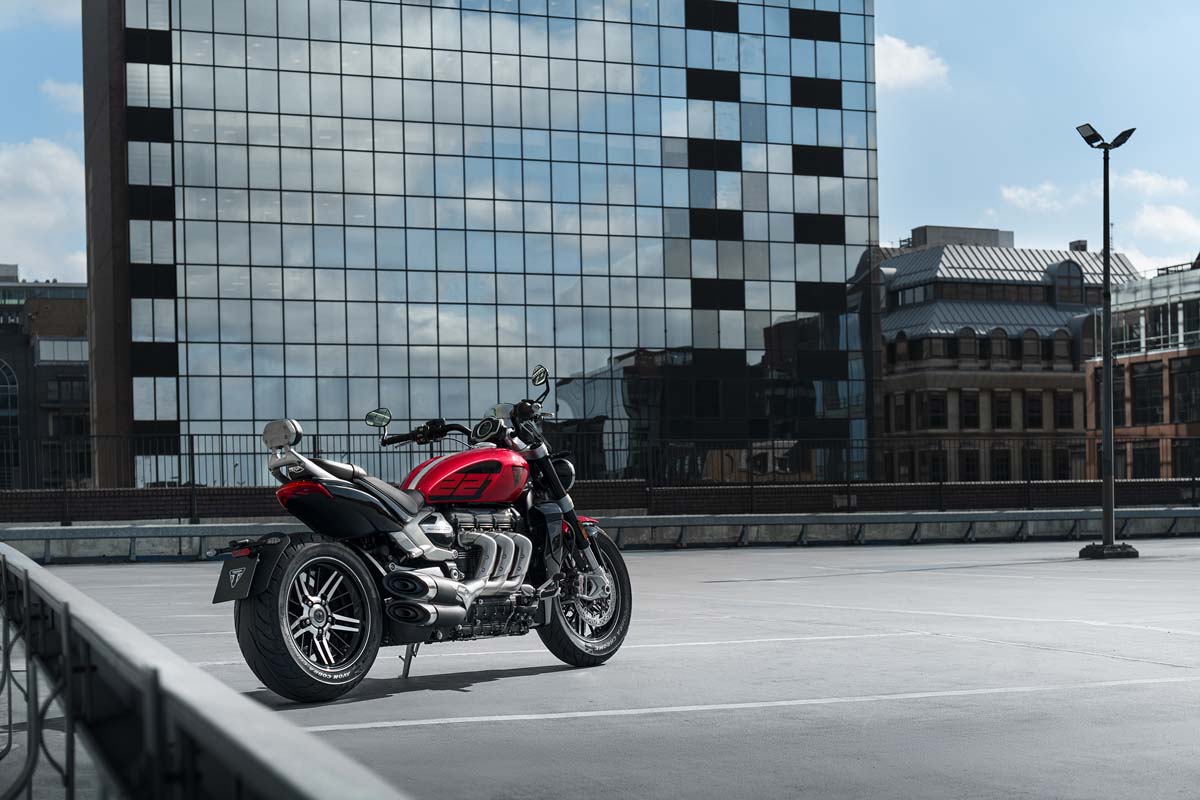 Mechanical specifications on the Rocket 3 R and GT 221 Special Editions are unchanged from the regular versions of Triumph’s “high performance muscle roadster,” so they feature the same 2458cc three-cylinder engine producing 167PS (123kW) at 6000rpm and 221Nm at 4000rpm.

This fuel-injected inline triple with ride-by-wire throttle is matched to a 6-speed gearbox with a torque-assist clutch and a smooth shaft final drive. 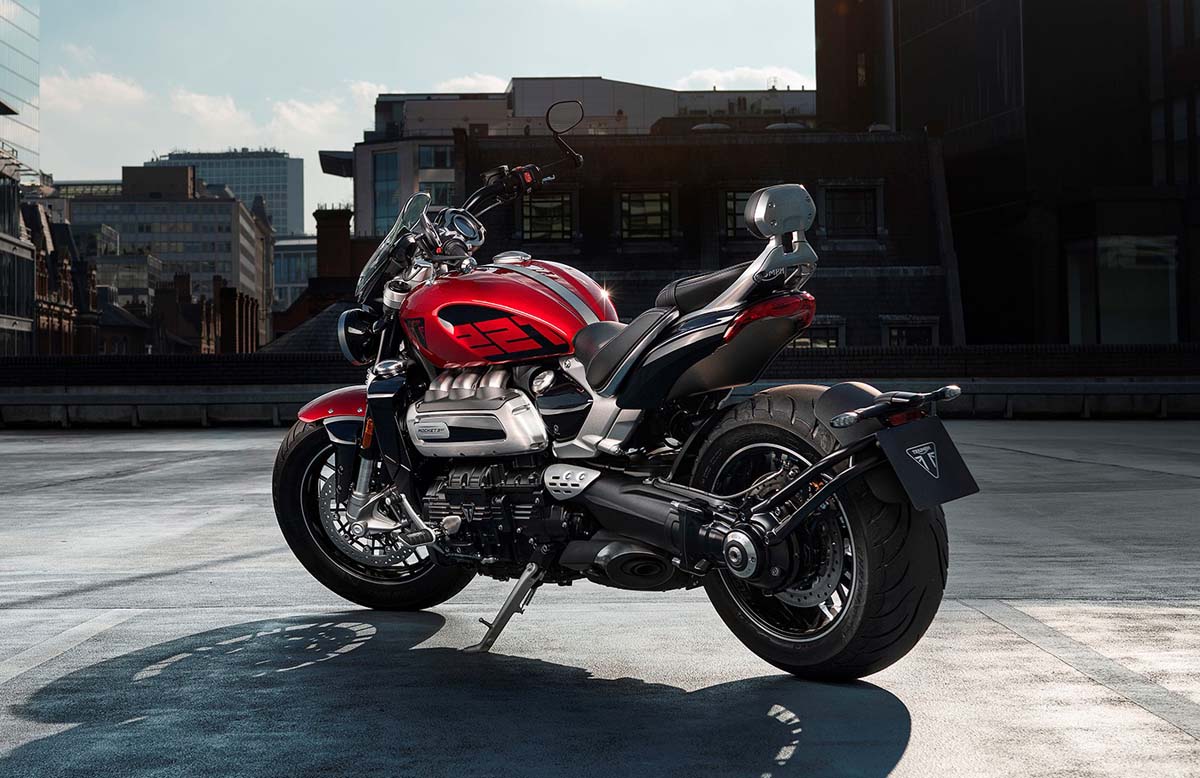 The all-aluminium frame and cast aluminium single-sided swingarm introduced on the MY20 Rocket 3 contributed to a claimed 40kg weight reduction over the preceding version, and this chassis continues for 2022. It’s connected to a Showa suspension package made up of 47mm USD forks with compression and rebound adjustment, and rear piggyback shocks with full adjustability, including remote preload adjustment. Front and rear suspension travel of 120mm and 107mm is common to both the R and GT, and also applies to the 221 Special Edition. 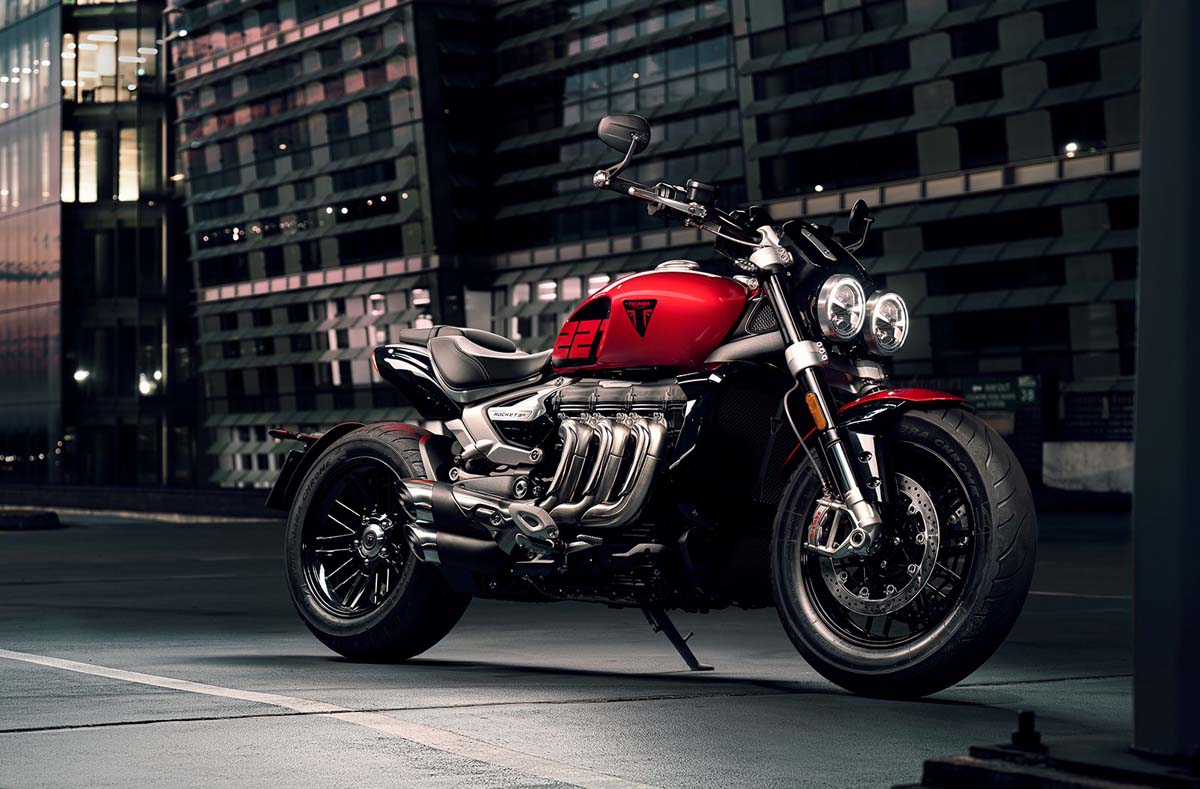 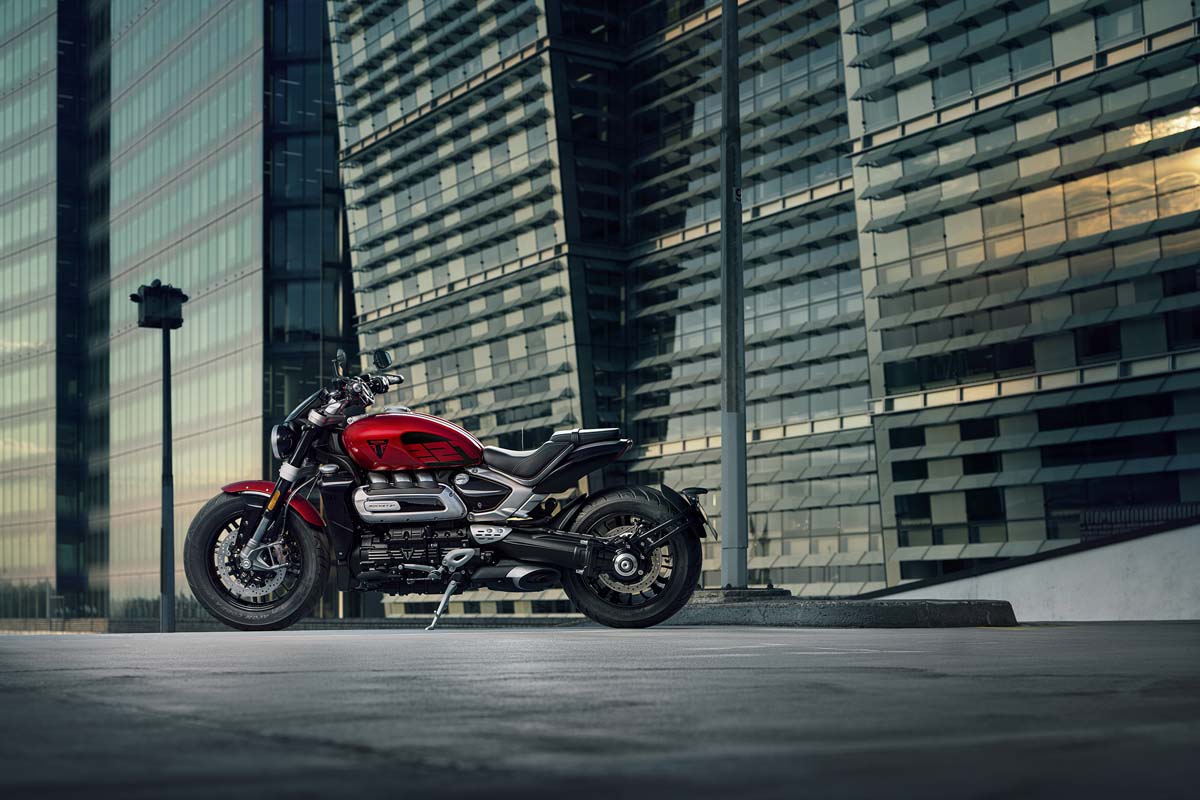 Already well-equipped on the tech front, the Rocket 3’s built-in safety and rider-assistance technologies all carry over to the 221 Special Edition, including the colour TFT instrument screen (that offers two different display themes and can be personalised) and illuminated switchgear.

There are four riding modes – Road, Rain, Sport and Rider Configurable that allows individual adjustment of throttle response and traction control intervention, even when on the move. 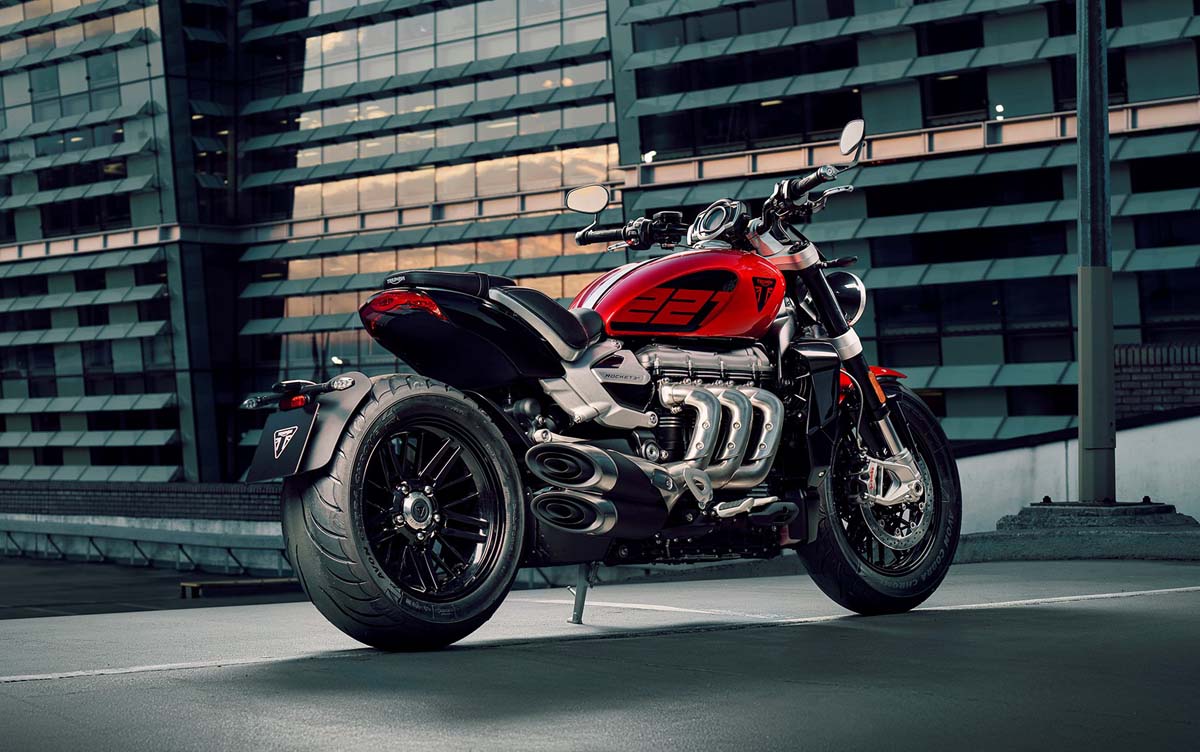 Lighting is LED all-round, including the signature DRLs, while there’s also a keyless ignition and steering lock. A USB charge socket is common to both Rocket 3 variants and the GT adds heated grips on its bespoke handlebars.

An optional Bluetooth module allows easy phone and music control via the switchgear, as well as turn-by-turn navigation using the inbuilt MyTriumph connectivity software and a dedicated app. Once activated, this allows route planning and displays directions and important roadside features, like petrol stations, restaurants, rest areas and accommodation, on the TFT screen.

Finally, the Rocket 3 features an exclusive GoPro control system that’s also available as an accessory and allows camera operation through the switchgear via Bluetooth. 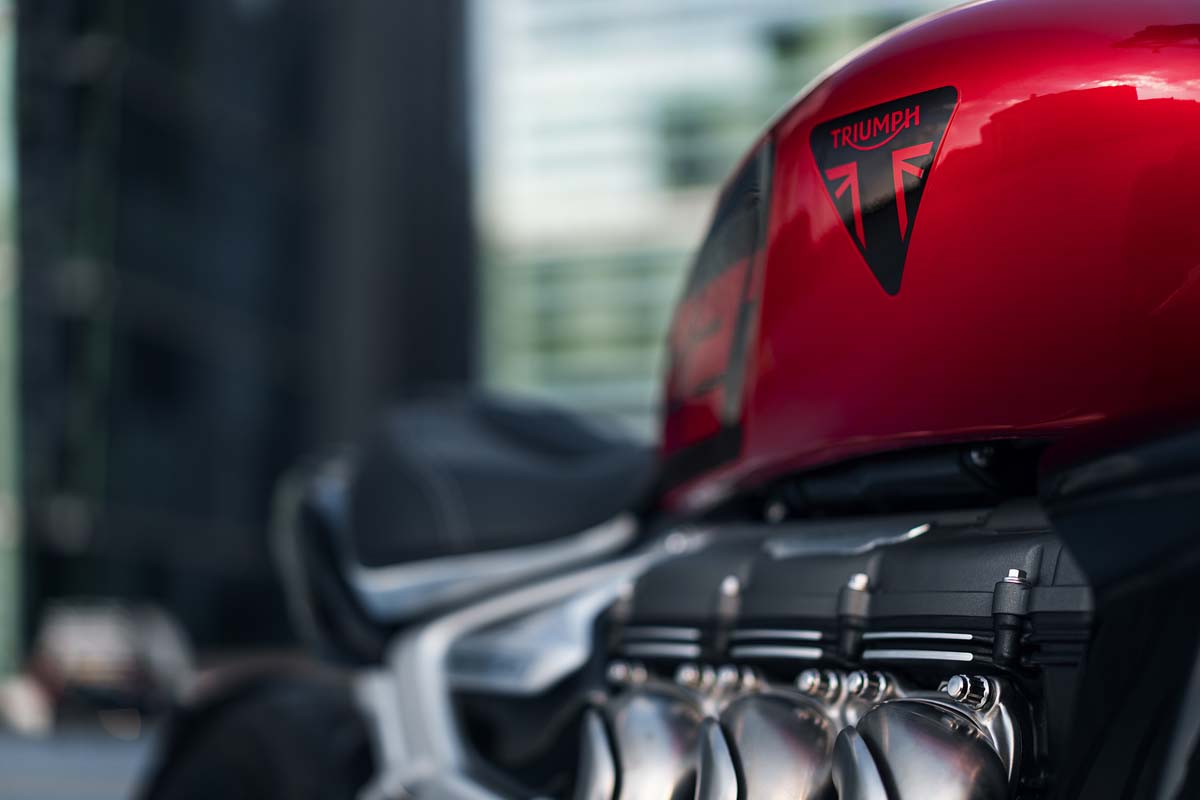 Unlike the Rocket 3 R Black and Rocket 3 GT Triple Black, of which only 1,000 units each were built, production of the Rocket 3 221 Special Editions will not be limited in number but will only be offered for the 2022 model year.

Local delivery for the Rocket 3 R and GT 221 Special Edition has been set for January, 2022.