Triumph have previewed the 2021 version of their Speed Twin, which will arrive with several updates and improvements, including more power and torque, suspension and brake upgrades, a new lightweight wheel design, updated riding modes and new detailing touches. 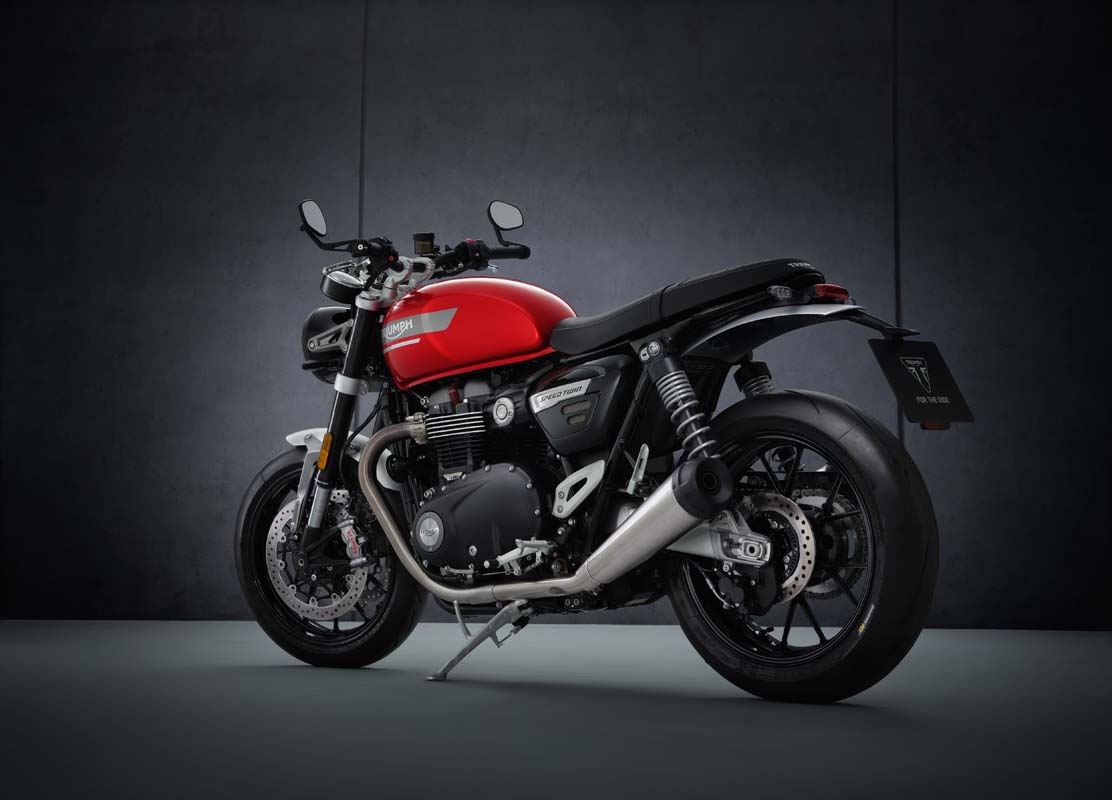 Staying true in most respects to the ‘original’ Speed Twin from 2019 (a revived Triumph model name first seen in 1938) and certainly retaining the model’s harder edge over the smaller-engined Street Twin, changes made to the upcoming MY21 Speed Twin nudge it closer to the Thruxton it shares some componentry with. 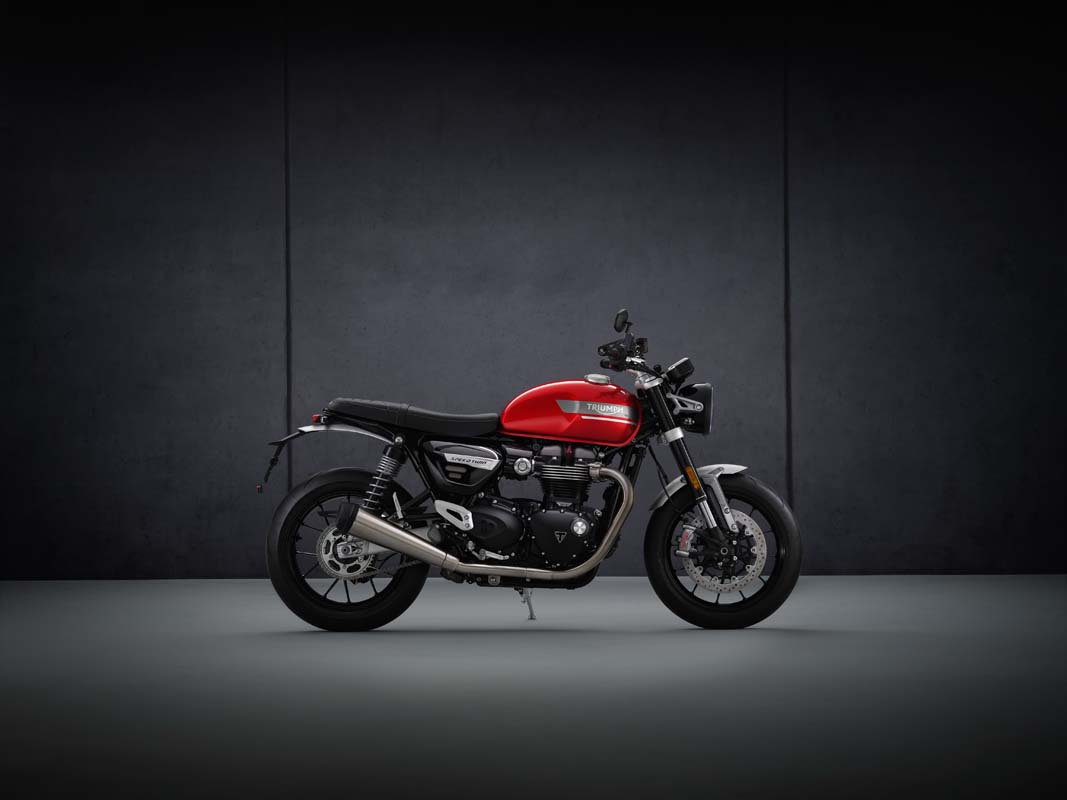 In line with the rest of the Bonneville range which run the same engine, the 1198cc parallel twin in the MY21 Speed Twin has been modified to meet Euro 5 emissions standards. Normally, this means reduced power, but Triumph have somehow managed to increase maximum horsepower while reducing emissions.

Compared to the current Speed Twin’s maximum 71.5kW at 6,750rpm, the MY21 update improves that to a 73.6kW maximum at a higher 7,250rpm redline, with claims of more mid-range power, too. Maximum torque is unchanged at 112Nm, but arrives at a lower 4,250rpm, compared to the current model’s 4,950rpm, with a more even torque curve. 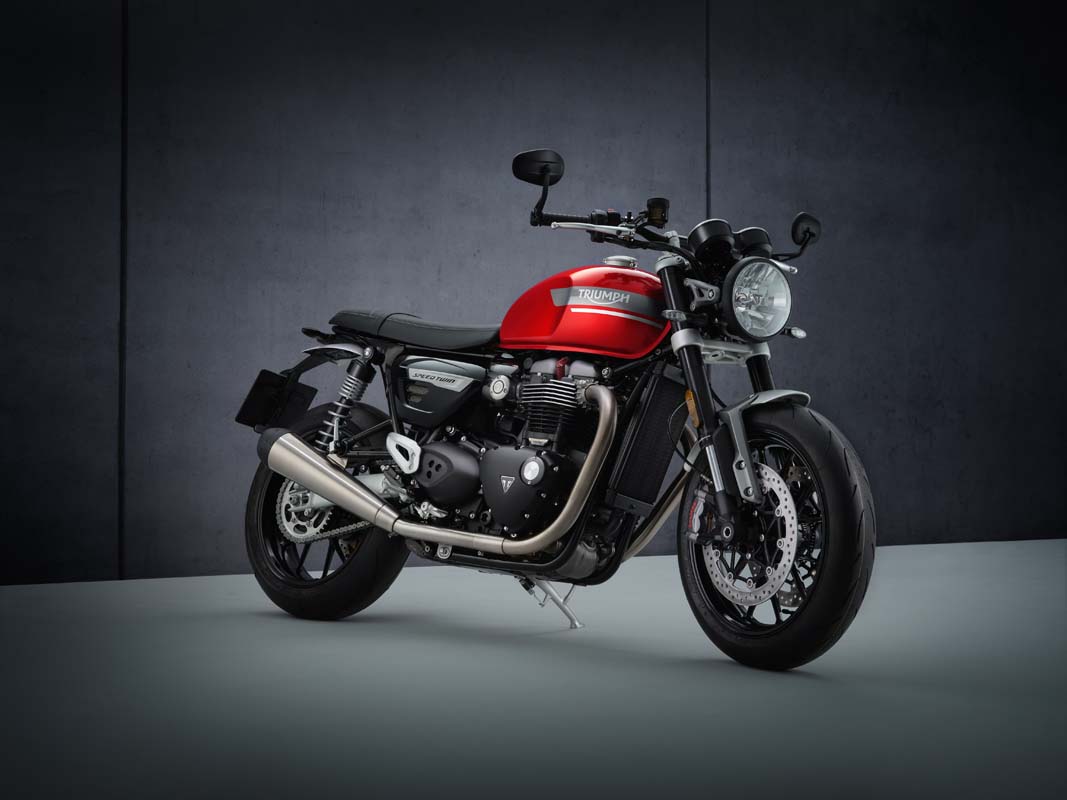 The updated engine is more responsive, can spin up more rapidly and rev harder for longer, thanks to a reduction in inertia by a claimed 17 per cent (via a new lightweight crankshaft and alternator).

Despite the engine updates, the first major service interval remains unchanged at a long 16,000km.

For all the engine tweaks, the six-speed gearbox appears to carry over unchanged, and while there’s no quickshifter on this upgrade, the slip-assist clutch remains. 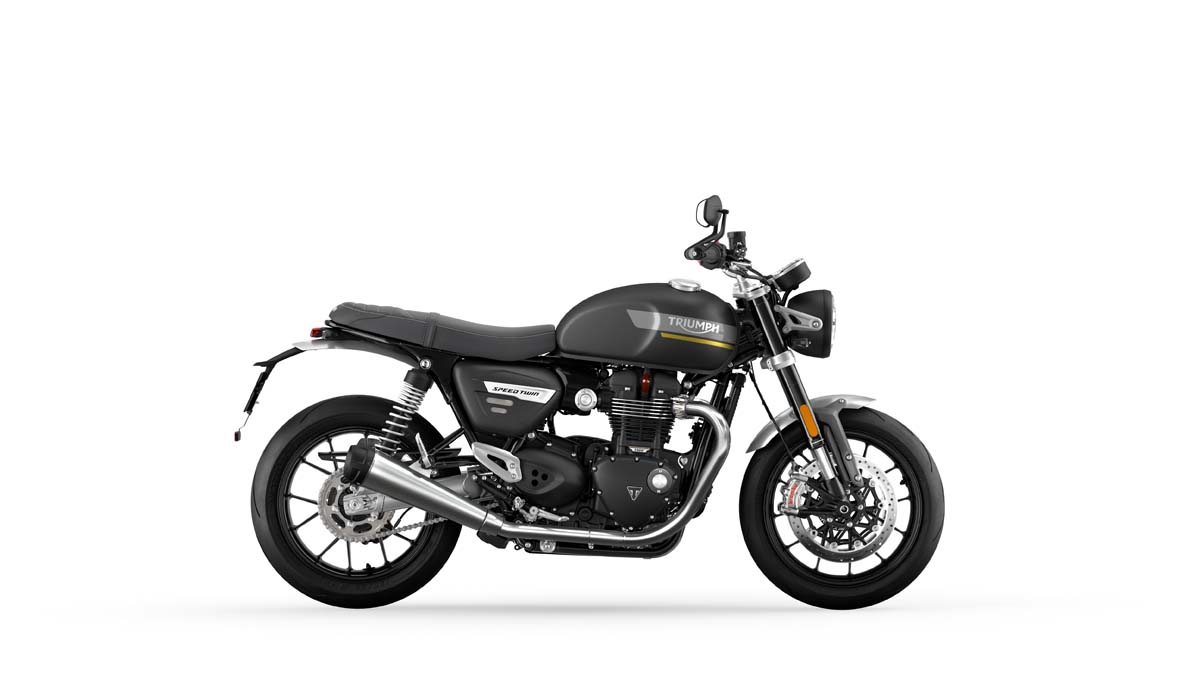 While engine mods have increased the MY21 Speed Twin’s power, various suspension and braking upgrades have improved handling, with Triumph claiming an “even more precise, agile and dynamic ride”.

The 41mm KYB conventional forks have been replaced with 43mm USD Marzocchi units with cartridge damping for an improved front-end ride, but the 120mm travel is unchanged. A twin shock rear remains, with adjustable preload and the same 120mm travel as the front.

In terms of braking, the twin front discs have been upsized from 305mm to 320mm diameter and the Brembo calipers upgraded to M50 radial monobloc four-piston units, but the rear disc remains unchanged at 220mm with a Nissin two-piston caliper.

Completing the spec upgrade is a pair of Metzeler Racetec RR tyres, replacing the Pirellis previously fitted, but still of a 120/17 front and 160/16 rear combination. These tyres are fitted to all-new lightweight cast aluminium wheels with a 12-spoke design. Despite this, dry weight remains unchanged at 196kg.

Riding position remains neutral and relaxed, with a narrow cross-section, tapered handlebars and less aggressive footpeg placement compared to the Thruxton. A fractional 2mm seat height increase to 809mm is the only apparent difference in the ergonomics. 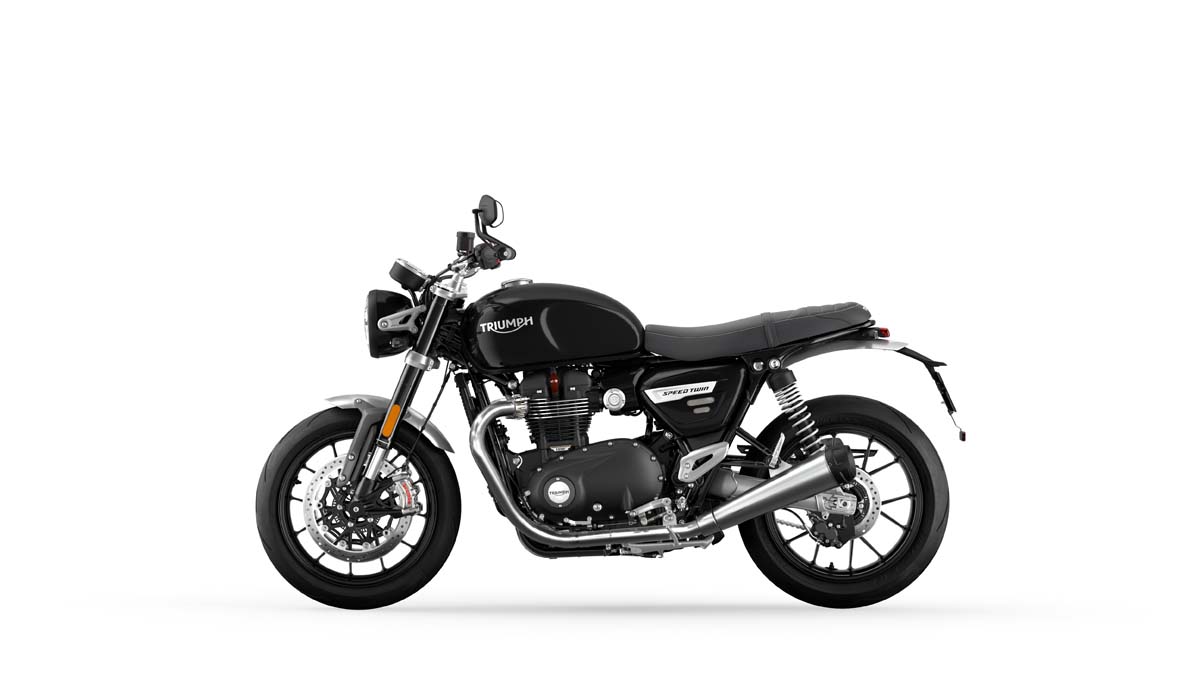 A ride-by-wire throttle and three riding modes remain part of the Speed Twin’s spec for the upcoming 2021 version, but throttle response in the riding modes have been adjusted to match the increased engine output. The traction control has also been tweaked to suit and can be deactivated.

LED lighting features all round, with a DRL incorporated into the headlight, while a USB port under the seat remains a Speed Twin feature

The distinctive twin instrumentation carries over, too, with the clocks incorporating an analogue speedo and revcounter in keeping with the Speed Twin’s retro-inspired styling ethic. Within each of these analogue clocks are digital displays for fuel level, fuel range, fuel consumption, gear position, riding mode, odometer and tripmeters. As with the current Speed Twin, display information can be adjusted via a button on the left-hand switchblock. 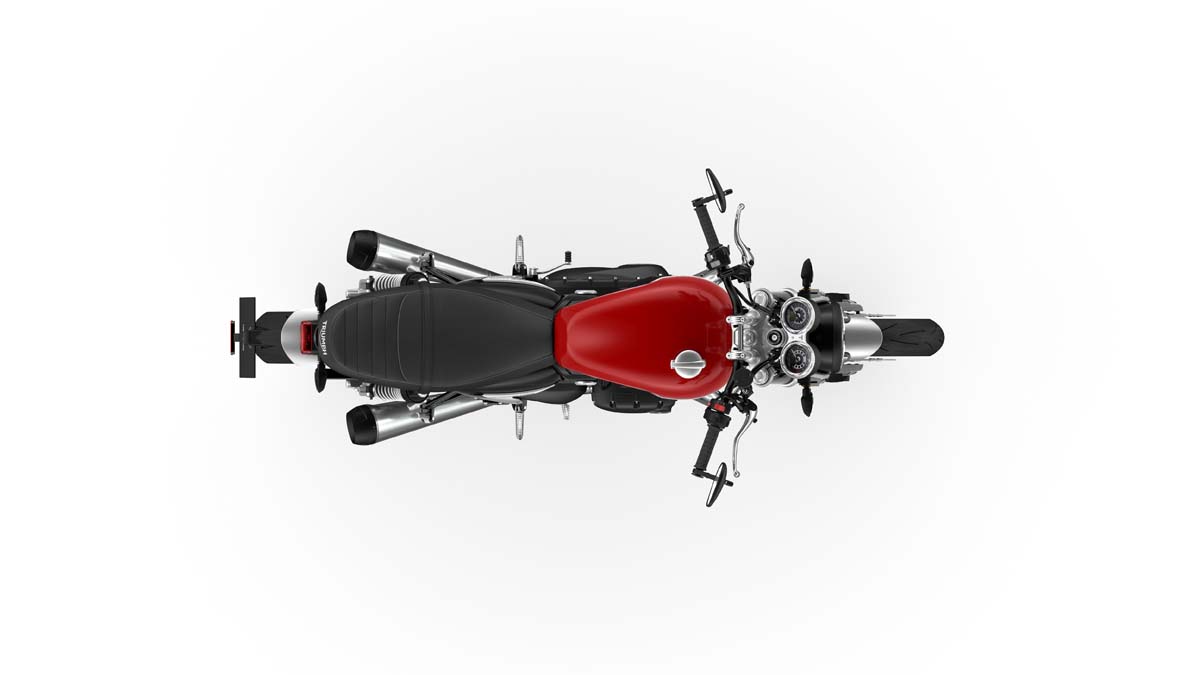 Styling changes on the 2021 Speed Twin are confined to a new-look front mudguard, new mounts for both front and rear mudguards, new headlight brackets and a brushed aluminium treatment for the side panel finishers and heel guards.

With the switch to the USD Marzocchis, the old-school fork gaiters are gone and the upper and lower triple trees are finished in silver instead of black. The rear shocks are now finished with silver springs and black caps, replacing the black springs and chrome caps of the current Speed Twin.

Colour options include Jet Black (carried over from the current Speed Twin), with the new additions being Red Hopper and Matt Storm Grey. The latter two colours feature redesigned graphics and subtler striping on the 14.5-litre fuel tank.

The new wheels are finished in black and the mudguards finished in silver, regardless of colour choice. 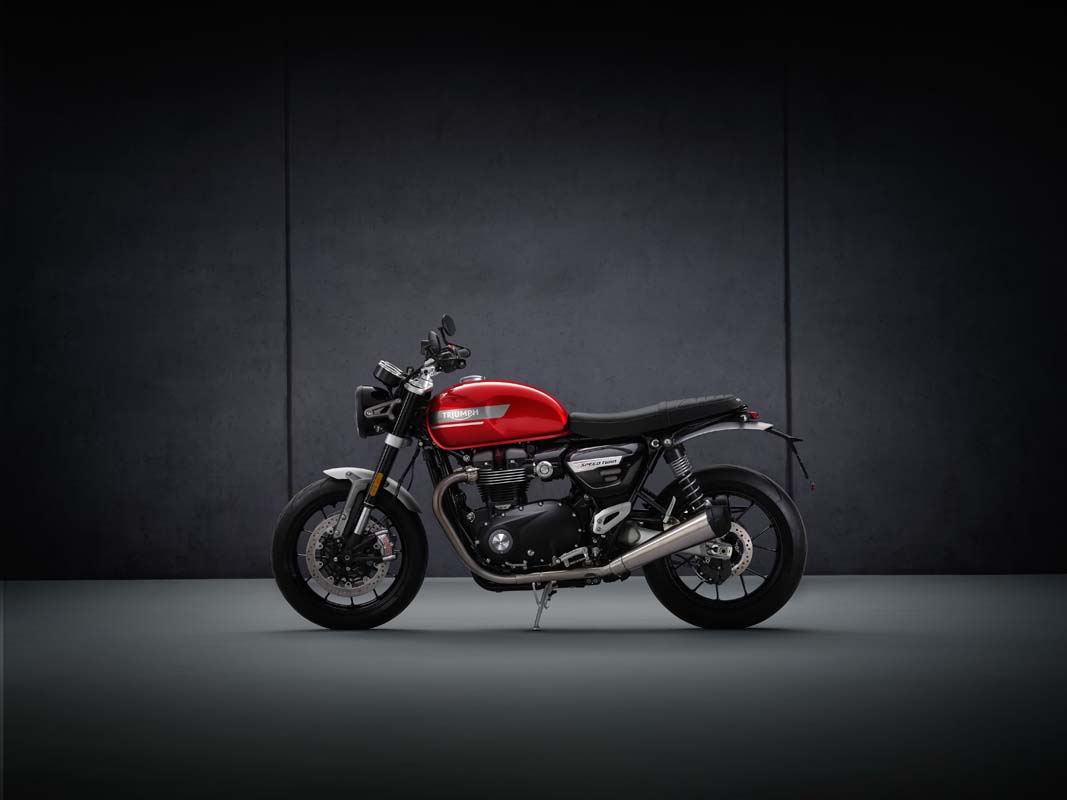 Australian release for the 2021 Speed Twin has been set for August. A catalogue of more than 50 accessories will be available from local launch, including heated grips, multi-function indicators, tyre pressure monitoring, tank pads, luggage and a broad range of cosmetic parts.

No pricing had been revealed at time of writing, but given the new and updated componentry on the 2021 Speed Twin, expect a premium over the current model’s $18,000 starting price (+ ORCs). While pricing remains TBC, Triumph Australia has confirmed the updated twin will be offered with a two-year, unlimited km warranty.