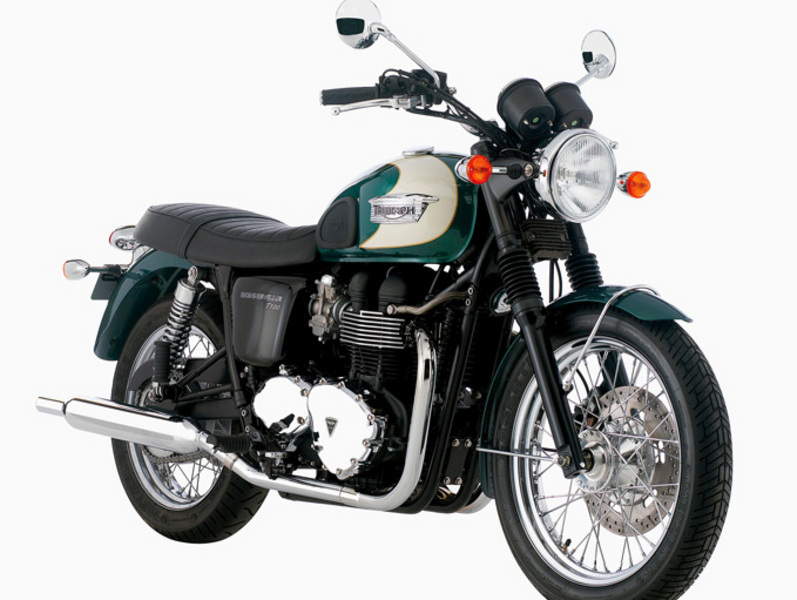 New handle bars are closer to the rider, and seat height is reduced by 25mm making the riding position even more relaxed and accessible. The smaller, lighter, front wheel helps make the new Bonneville a maneuverable, agile machine sure to inspire confidence in anyone who rides it. Practicality is aided by an optional rear rack, which is a new addition to the lengthy list of official Triumph accessories. Complementing the clean lines are classic black or white colour options.

Triumph's 865cc air-cooled parallel twin remains the heart and soul of the Bonneville. Its 360 firing order gives the modern Bonneville the engine characteristics of a classic twin, while twin balancer shafts and cutting edge production methods ensure up to date refinement and reliability. Ninety percent of peak torque- a very healthy 69Nm at 5,800rpm - is maintained from around 2,500 rpm through to the redline providing smooth, effortless acceleration throughout the five gears.


Triumph is introducing an exclusive limited edition of its legendary Bonneville model to celebrate 50 years of the iconic twin-cylinder machine.

Based on the standard Bonneville T100 model, the Triumph Bonneville T100 50th Anniversary pays homage to its 1959 namesake with a unique paint scheme and exclusive extras.

Each Bonneville 50th Anniversary will come in a special two tone meriden blue/exotic orange combination, complemented with hand painted gold pinstripes. The livery echoes the 'Tangerine Dream' design that proved such a talking point on the 1959 originals. Only 650 Bonneville T100 50th Anniversary edition bikes will be produced, echoing the engine capacity of the original Bonneville, and each will be individually numbered and identified with a brass plate on the handlebar clamp.

In addition, each bike comes with a certificate of authenticity signed by John Bloor, owner of Triumph Motorcycles Ltd.

Triumph is also introducing a comprehensive line of special edition Bonneville 50th Anniversary clothing, consisting of a top quality casual jacket (which features a reproduction of the very first Bonneville advertisements printed in the lining), a zip thru fleece and two T-shirts. A range of accessories, including a limited edition print, will also be available to celebrate the Bonneville anniversary.

The Bonneville legend was born when Triumph named its sporting new model to commemorate breaking the motorcycle speed record at the famous Bonneville Salt Flats.

Since creating a stir at the 1958 Earl's Court show in London, the Bonneville has become a modern classic. The original Bonneville was the fastest bike around and synonymous with the rebellion and independence of its heyday, made famous as the motorcycle of choice by Hollywood legends. Although the latest Bonneville shares the name and timeless looks of the original, it features a modern chassis and fuel injected 865cc twin-cylinder engine.

Riders looking for a Sixties style Bonneville are catered for with the wire wheeled T100 model, which has been updated with some minor detail changes for 2009.


Adding subtle touches to the uncluttered Bonneville form, the T100 wears a little extra to mark its connection with the classic 'deluxe' speedster of the Sixties. The T100's full blooded and responsive 865cc parallel twin-cylinder engine delivers throaty acceleration, amplified by the mellow backbeat from its twin pea shooter exhaust pipes. Maximum power of 68PS (67bhp) arrives at 7,500rpm, with peak torque of 69Nm delivered at 5,800rpm.

Completing the T100 are a tachometer, rubber knee grips and chromed engine covers. Accessories available for the T100 include classic chromed extras such as a front mudguard, side stand and cam cover, as well as practical additions like the fly screen and tank bag.

The retro classic gets new handle bar clamps, restyled footrests, black clock surrounds and a white Triumph logo on the seat, while fork gaiters, previously available as an optional extra, come as standard. The comprehensive range of accessories can also be fitted to the T100 for an even more individual look.

The elegant two-tone paint options for 2009 include jet black with a fusion white infill, claret with an aluminium silver infill and forest green with a new England white infill, all of which come with a gold coach line. The T100's coach lines are all skilfully hand applied, with each craftsman initialling the under side of a completed tank. 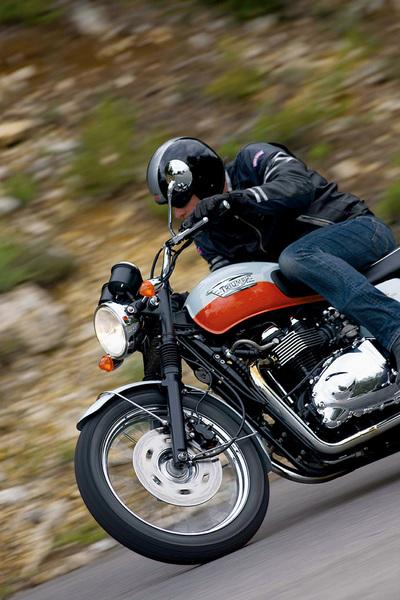 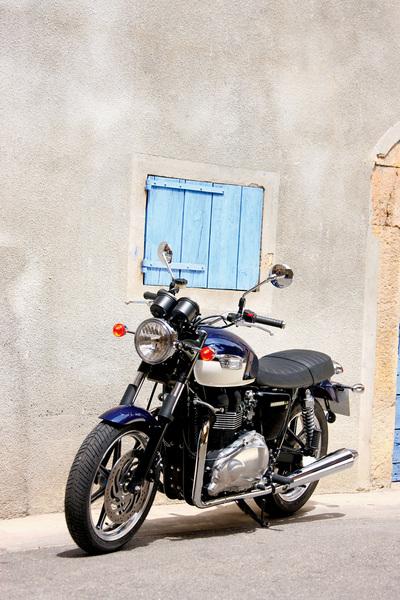 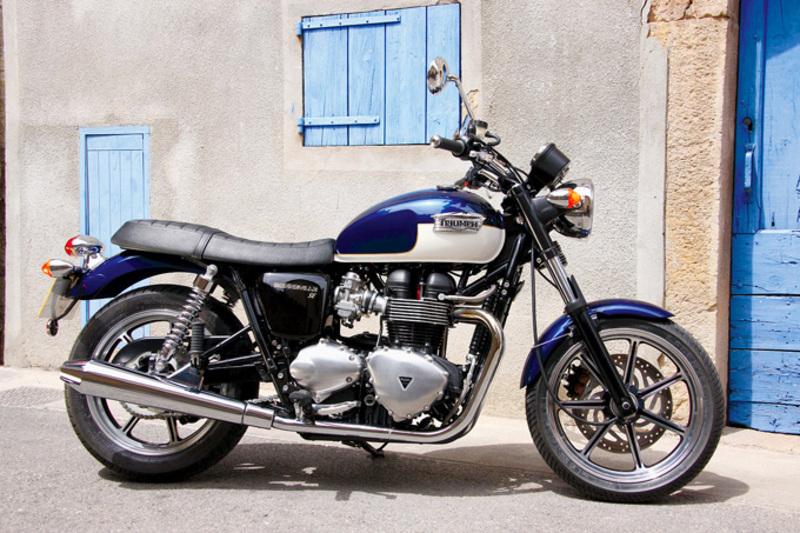 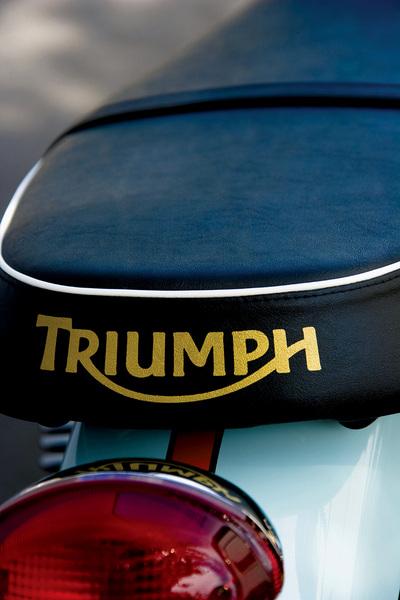 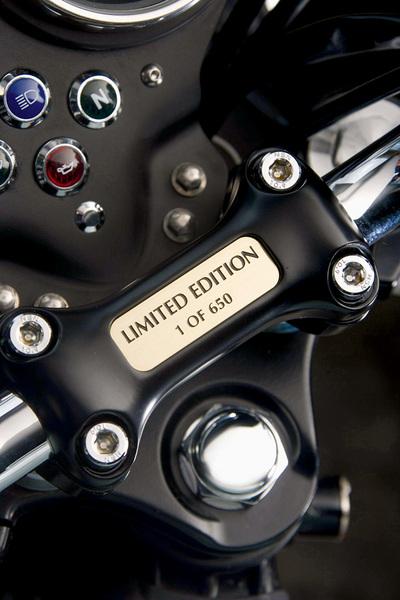 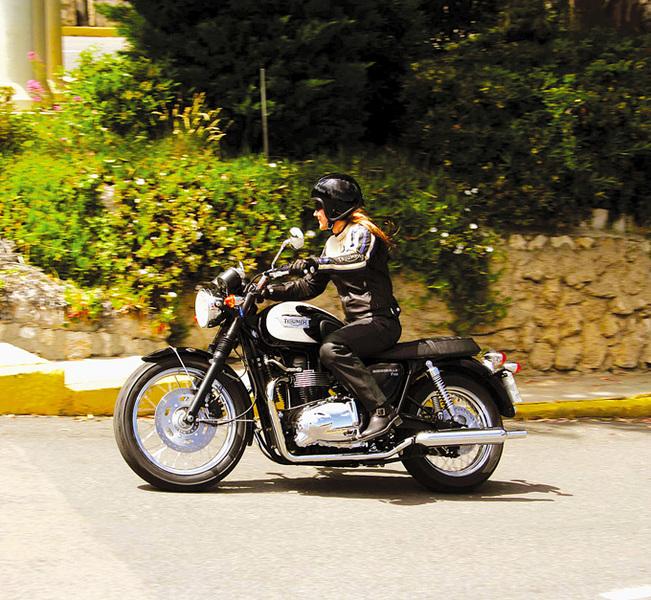