Triumph Motorcycles are soon to release a special version of their Thruxton RS that pays tribute to two separate elements of British motorcycle history. 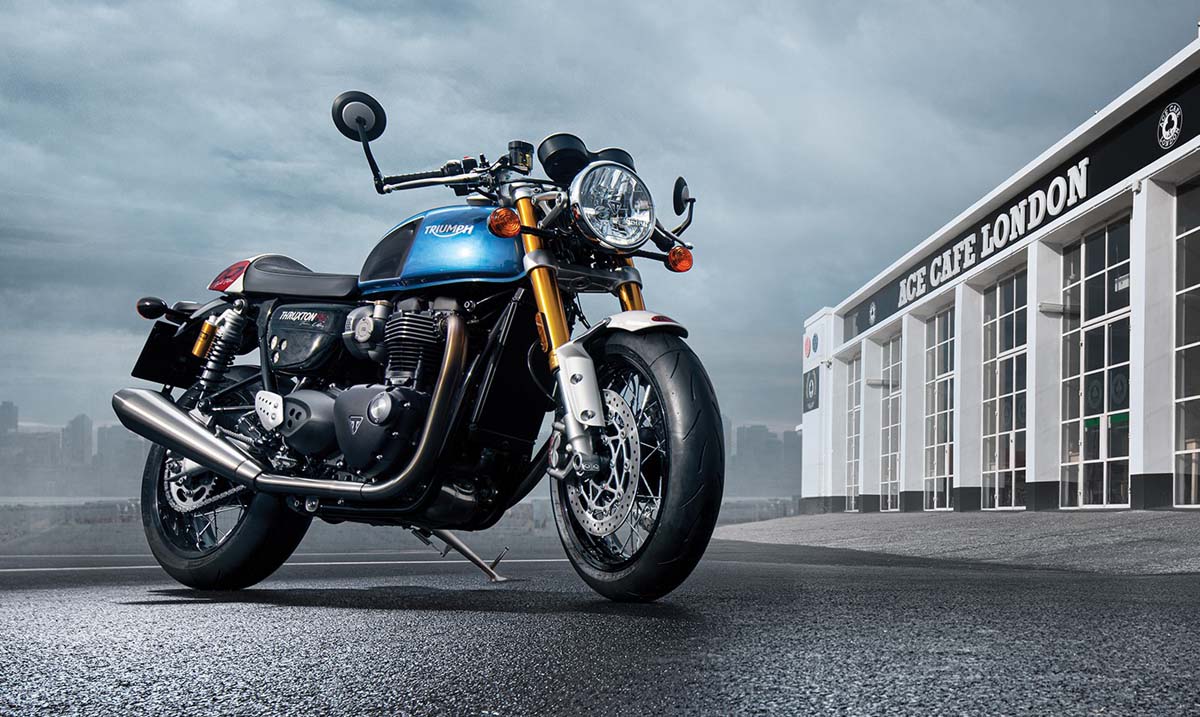 The Thruxton RS ‘Ton Up Edition’ is inspired by both the “Ton Up Boys” that defined the UK’s café racer culture during the 1950s and ‘60s, as well as the first 100mph ‘ton’ lap from a Production class bike at the Isle of Man TT. 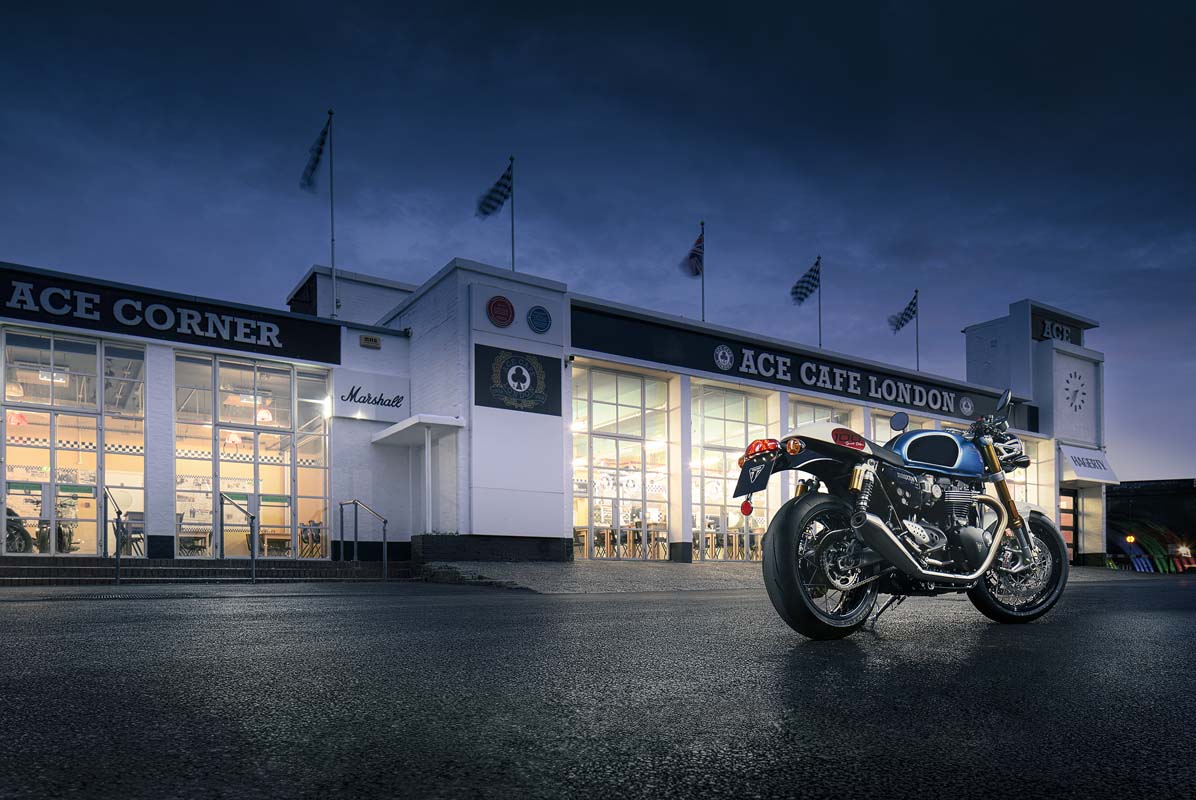 The latter was achieved by Welsh rider Malcolm Uphill in 1969 on a T120 Bonneville in the 750cc class. Two of his three laps of the Mountain Course that year were in excess of 100mph, and thanks to Uphill, Triumph not only won the 750cc Production class, but took five of the top seven placings.

Uphill’s T120 at the ’69 TT featured a blue fuel tank and white fairing and tail unit, with a red roundel bearing his racing number. This combination has inspired the treatment of the Thruxton RS Ton Up Edition. 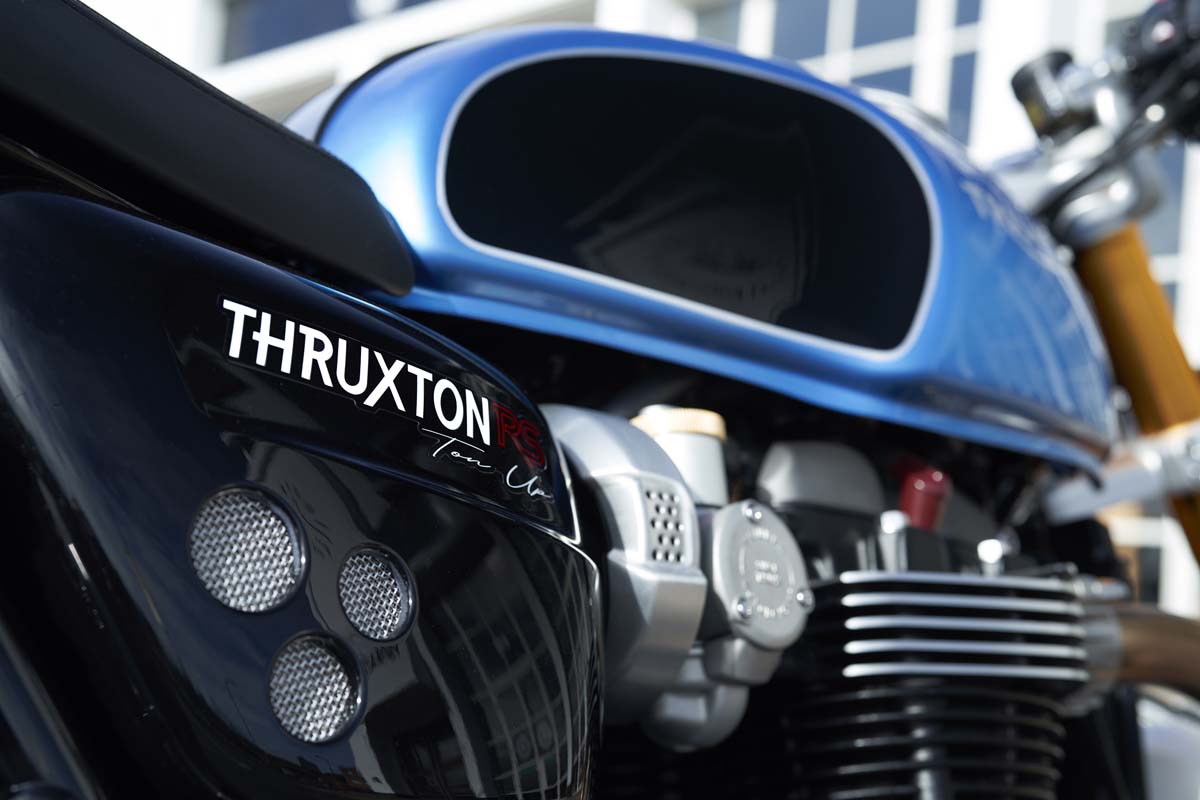 Defined by a fuel tank finished in Aegean Blue with Jet Black kneepad graphics edged with hand-painted silver coachlines, the Thruxton RS Ton Up Edition also features a seat cowl and front mudguard in Fusion White, with both these latter elements adding a Carnival Red graphic with a black ‘100’ number – all in the style of Uphill’s racing Triumph. 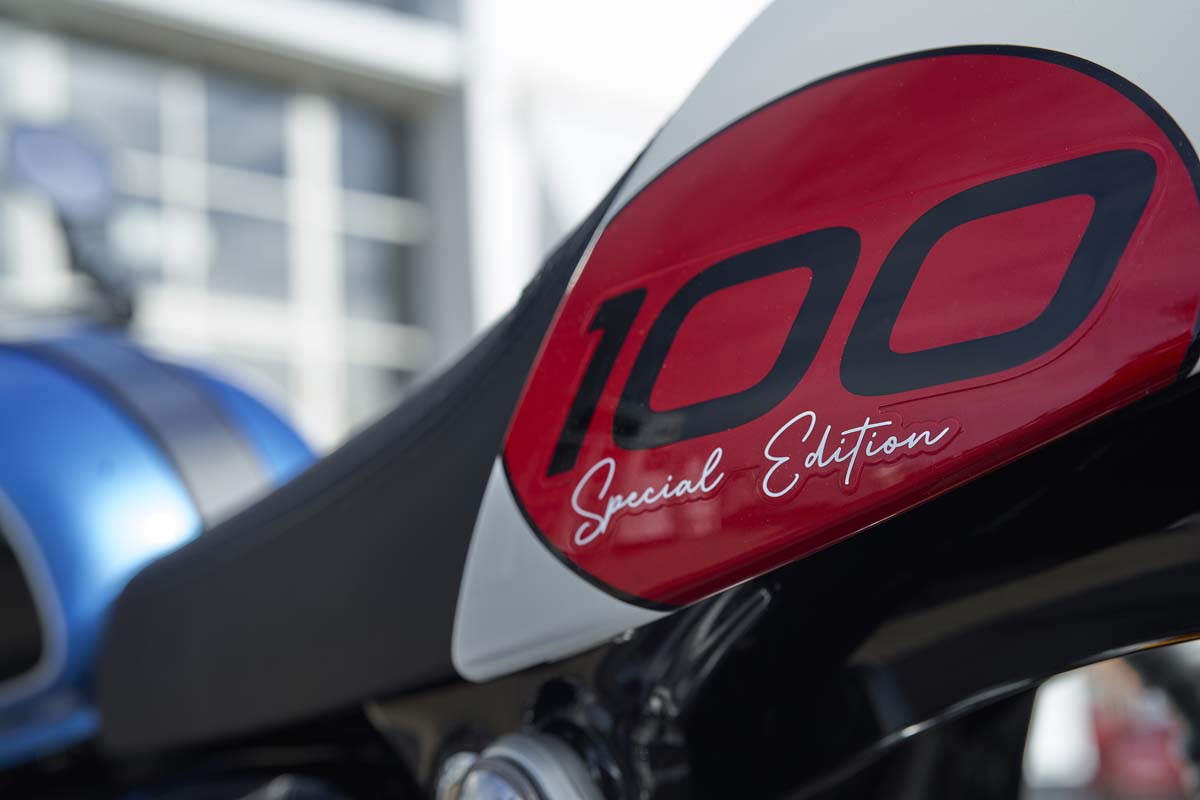 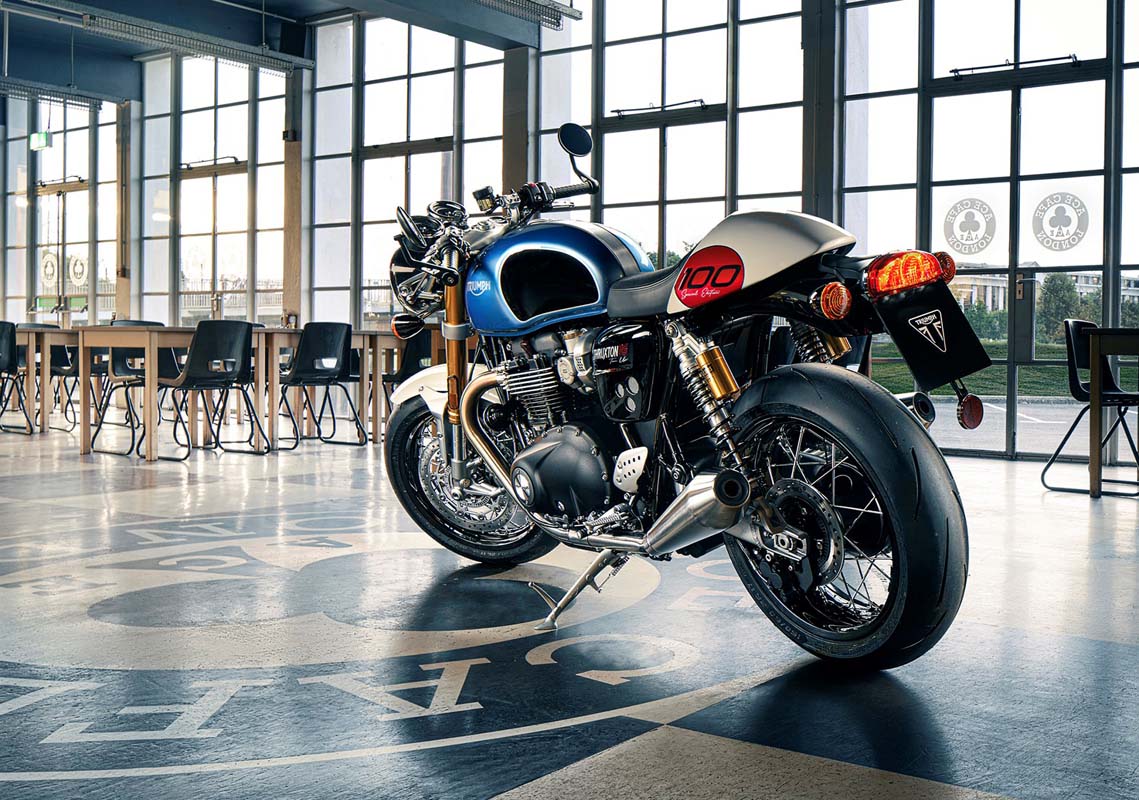 Compared to the stock Thruxton RS, other cosmetic differences on the Ton Up Edition include fork shrouds in matte aluminium silver and blackout treatment of the engine covers, rear suspension springs and wheel rims.

While not part of the Ton Up Edition’s spec, a cockpit fairing in Aegean Blue will be available as an accessory. 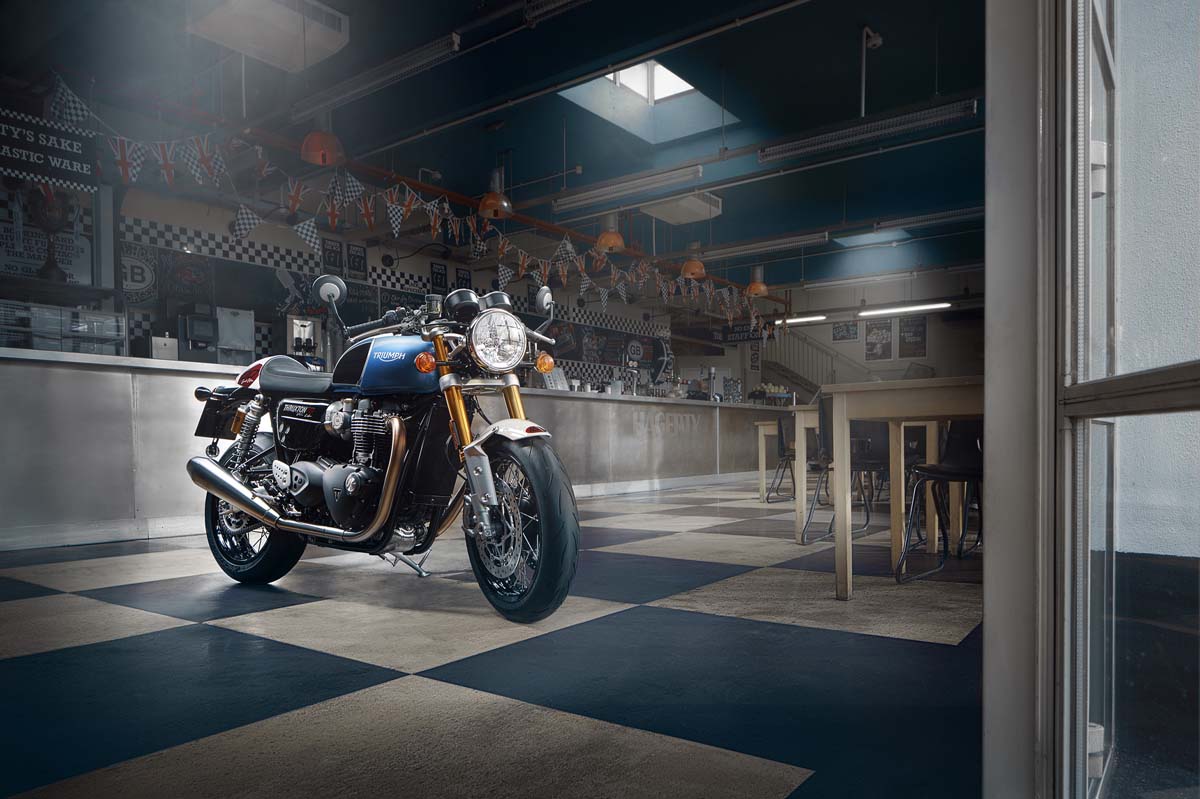 Cosmetic changes aside, the Ton Up Edition is unaltered from the standard Thruxton RS, which means a Bonneville 1200-based 1200cc parallel twin producing maximums of 77kW at 7500rpm and 112Nm at 4250rpm.

This liquid-cooled Euro5 compliant engine is fitted with distinctive twin megaphone silencers and matched to a six-speed transmission, all fitted within a tubular steel twin downtube frame and aluminium swingarm. 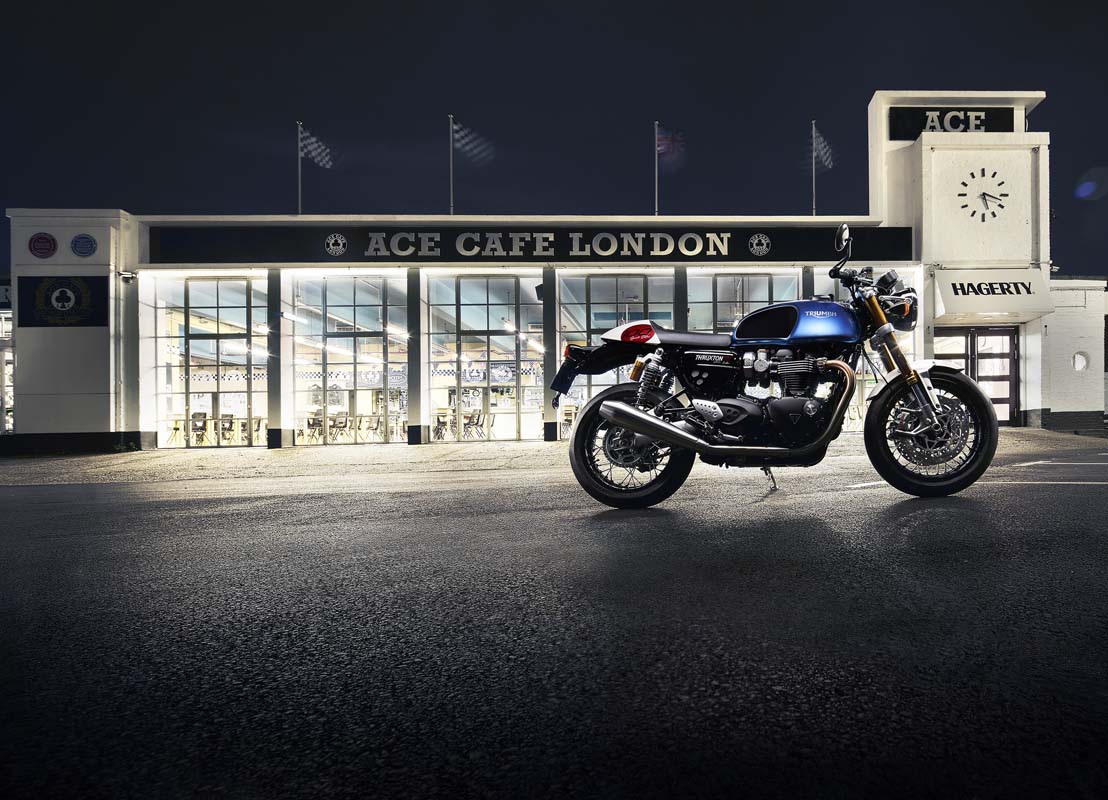 The high spec of the Thruxton RS that carries over to the Ton Up Edition includes sporty Metzeler Racetec RR tyres, Showa 43mm USD forks that are fully adjustable and twin Öhlins remote reservoir rear shocks that are also fully adjustable.

Braking is a combination of Brembo M50 4-piston radial calipers on twin 310mm floating discs up front and a Nissin 2-piston caliper on a 220m disc at the rear, with ABS standard. 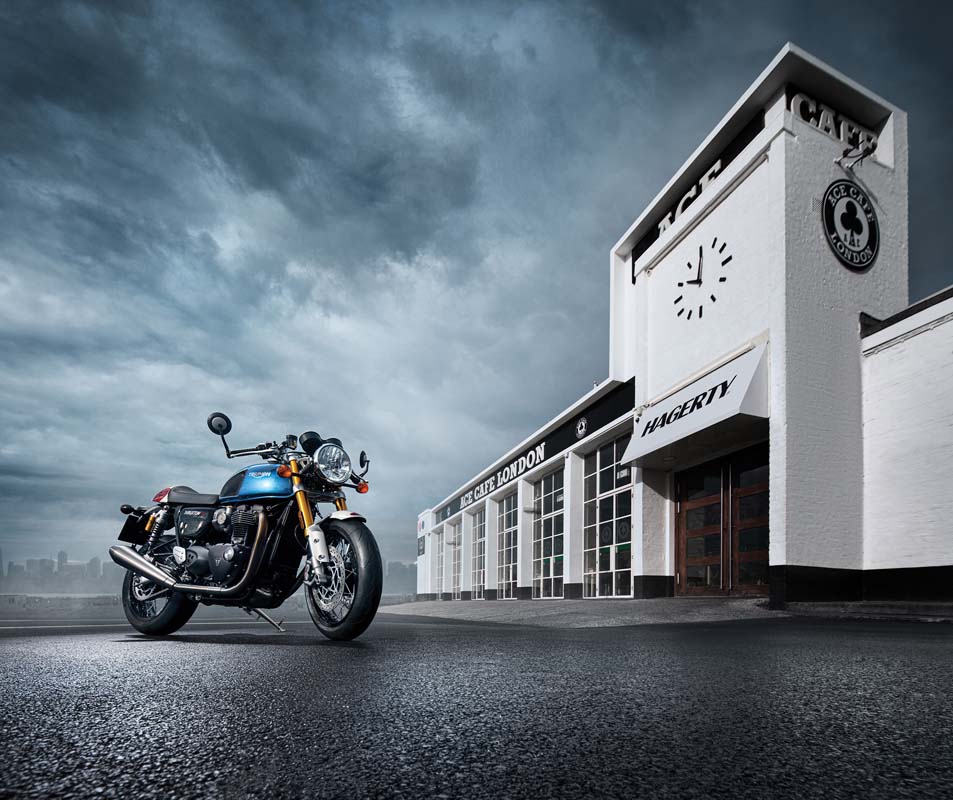 The Thruxton RS Ton Up Edition won’t be an ultra-exclusive numbered limited-edition like some previous Triumph offerings, but Triumph will only offer it for the 2022 model year.

Two other Triumph models, based on the Street Twin and Rocket 3, will follow a similar practice and be one-year-only specials.

Australian delivery of the Thruxton RS Ton Up Edition is expected in January, 2022, with pricing from $27,150 ride away, which is a premium of $1,560 over the standard Thruxton RS.