Carlton Dry Honda Thor Racing's Brad Anderson finished the round on the top of the podium, after also breaking through for his first race win of the 2012 season. The two-time British MX champion won the day's opening moto, held under clear skies on Wonthaggi's sandy, but well-prepared track. Anderson followed up with second and third place results to secure the round victory.
"The first race went really well, I got the holeshot, but towards the end I got a little bit of arm pump," Anderson reflected. "When the second one came I got another good start, but then the dreaded arm pump kicked in again and Todd [Waters] came past. I relaxed a bit and came away with second in that. The last race came and that was my worst start of the day, but I came through a little bit and was riding pretty solid. I was able to take third, which I'm happy about, and I'm glad to pull some points back on Josh [Coppins]."

Anderson was one of three separate race winners in the premier MX1 ranks at Wonthaggi. Todd Waters (Motul Pirelli Suzuki) won the second moto, and backed that up with third and fourth place finishes to take second overall for the round. Cody Cooper (Motul Pirelli Suzuki) could only manage fifth overall after suffering with poor starts all day long, but once he got a good one, he proved unstoppable, taking the final moto win in dominant fashion. When he was firing, Cooper was quickest across the entire weekend.

CDR Yamaha's Lawson Bopping completed the MX1 podium at Wonthaggi, his first since joining Craig Dack's team this year. Consistent 2-3-6 finishes paid off for Bopping, while similar form from Bopping's CDR teammate Josh Coppins saw the Kiwi veteran take fourth overall for the round with 4-5-2 moto finishes. It was the first time Coppins has finished off the podium so far this year, but he retains the series red plate as MX1 leader.
"It was just an okay day for me," Coppins said at day's end. "I was always thereabouts, but never able to get myself to the front. But the day didn't do too much damage in the championship, although I do want to work on a couple of things prior to the next round."

A poor round from Honda privateer Jake Moss (Campbell Mining TLD Maxima) saw him slip from second overall to fourth. JDR/KTM Factory Racing's Daniel Reardon struggled with Wonthaggi's challenging track, finishing outside the top ten for the round, while Monster Energy Kawasaki's Jay Marmont also had a round to forget at Wonthaggi, finishing seventh overall with 6-6-7 race results.
"I'm in a hole at the moment and I need to dig my way out of it," the defending MX1 champion said. "I've just got to go out there and have fun on my dirt bike again and enjoy myself next week and turn it around. The team's been awesome, everybody's trying really hard to get me up there and we're not far away, there's a race win around the corner".

Filling in for the injured Billy Mackenzie at Monster Eenrgy Kawasaki, Dylan Peterson rode to a respectable ninth overall in his first hitout on the factory KX450F, but could've placed higher if a small crash in the second moto didn't cost him a possible top 5 finish.

The series will next head west to Wanneroo in Western Australia on 12-13 May, marking round four of 10 for the season. 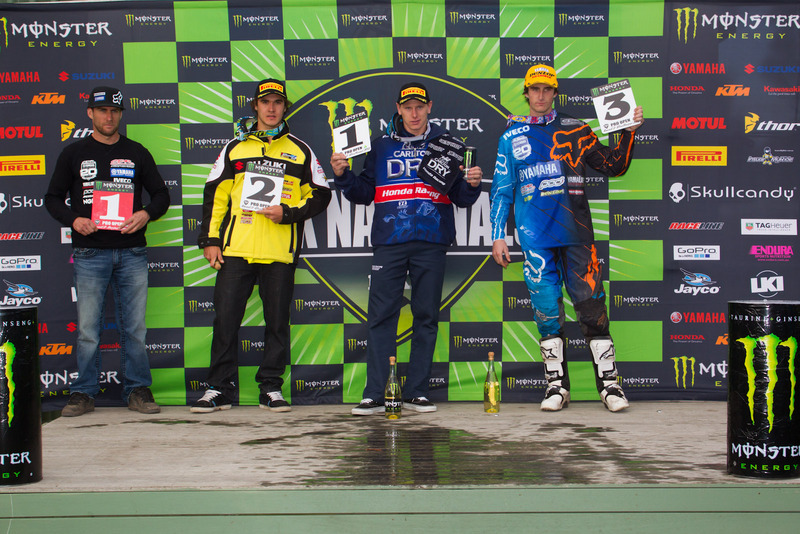