The Australian round of the world Superbikes was always going to be competitive with Troy Bayliss on his Ducatti going into the second round two points in front of fellow Australian Troy Corser. The fight for pole was equally as hot with Bayliss, the quickest after the first day of action. He mustered a full effort in the later stages of the first hour of timed qualifying at Phillip Island to score provisional pole, displacing new SBK inductee Alex Barros (Klaffi Honda) from his previous lead on the time sheets. A late push from James Toseland (Winston Ten Kate Honda) put him third fastest, with reigning World Champion Troy Corser (Alstare Suzuki Corona Extra) fourth quickest. The top four riders were all within less than half a second, but Bayliss had a useful advantage over the other three, going 0.403 faster than second quickest rider, Barros.

Bayliss returned to the top of the time sheets on Saturday, setting a scorching new lap record. His stunning superpole ride broke a seven-year-old best lap record. Current championship leader, Bayliss was top of every previous timed outing, and his eventual 1'32.159 was better than any recorded SBK lap. His pace set him up as clear favourite for at least one race win on Sunday. Notwithstanding he was to experience severe pressure from his compatriot Troy Corser who struggled against a spinning rear on the latter parts of his Superpole lap, but nonetheless set an impressive 1'32.373. James Toseland (Winston Ten Kate Honda) put in a 1'33.003 in Superpole, which placed him third fastest. The last spot on the front row could not have been a more popular choice for the legions of Aussie fans in attendance, as Steve Martin secured a prime piece of start line real estate with the fourth fastest Superpole lap. His Petronas team-mate, Englishman Craig Jones, was in the 1'35 bracket, qualifying three from bottom in 26th.

Race day - The battle of Troy!
It was Troytown at Phillip Island, with Australian fans celebrating a double win at round two of the World Superbike Championship with Wollongong's Troy Corser victorious in the first race, and Taree's Troy Bayliss taking the second battle. But it was a day of highs and lows for reigning world champion Corser. He came home with the win after a 22 lap dog fight with Brazilian Alex Barros; but his day ended with a sickening accident in race two that put him out of the race.

Tucked in behind early race leader James Toseland, Corser came unstuck when he went too hard into turn ten, highsided and while he slid across the track was hit in the back and clipped on the head by a passing Barros. He managed to get to his feet and scrambled across the track to avoid the oncoming barrage of riders heading down from Lukey Heights. Checked by medical staff with an all clear on his x-rays, the reigning world champ was choppered to Melbourne's Royal Alfred for precautionary scans of his kidney and spleen, and to ensure he had not aggravated any past injuries .
"I am fine though, okay. I lost the rear and it put me over the front, but that's racing, the ups and downs," said Corser, while boarding the chopper.

Bayliss on the other hand overcame his tyre problems that led to a disappointing sixth in race one, and snatched victory in race two - his first win in his return season to world supers. He took the lead from 2004 world champ James Toseland on lap 16, streaking ahead to finish 5.5 seconds ahead of the Honda rider with Alex Barros third. It was a far different story in race one though for Bayliss. After a perfect Friday and Saturday - leading every time sheet and smashing the l999 Superpole lap record of Corser in qualifying - he started race one on pole. He skipped off the start line and streaked way out front, building a sizeable 5.5 second lead by mid race and setting a new circuit record on his second lap - a 1m32.402s time to eclipse Corser's long standing mark from l999 by more than half a second. But Bayliss' devastating early speed took its toll. He overcooked his tyres and at lap 14 his rubber began to seriously burn, and the chase pack of Corser and Barros rapidly overhauled him.

Corser and a pursuing Barros took the lead on lap 17. As Bayliss faded to an eventual sixth, the Aussie champ and the world class Brazilian veteran - in only his second round in world superbikes - battled neck and neck in a high pressure duel that saw Corser the victor.

"I don't know what happened in race one," said Bayliss after his race two victory.
"Maybe I went too hard too early, or maybe it was a tyre not up to standard. But in race two we ran a harder rear tyre and I was as delicate as I could be in that race. I really tried to look after it."

"But I was nearly in the same situation with the tyres in race two with three laps to go, but I still managed to pull a good enough gap to win. It's swings and roundabouts, that's racing, you don't know what's around the corner," said Bayliss.

It was a patience game in race one for Corser, who raced with the chasing pack as Bayliss's backside disappeared in front of him. When Corser took the lead on lap 17 with Barros breathing down his back, the pressure intensified as he fought the Brazilian off over the final five laps.

"They're all tough races here at Phillip Island, there is never an easy one. I just had to pace myself and not panic, especially when Troy (Bayliss) was so far out in front," said Corser.

"I just tried to do the best I could, and have a bit left at the end. I could see that Troy was really struggling mid race and I think he even stuck his foot out at turn ten to say go past me ."

"I think he just overcooked the tyres too soon; they are long long races round here. Then I had Barros on my back. He was a bit faster on a couple of corners, but I just put my head down - if he was going to pass me, he was going to have to go round me."

Barros's second and third placings secured him fourth on the champion-ship for Klaffi Honda and signaled an ominous warning to his foes. With his late signing to superbike after 15 years in MotoGP, Barros only sat on the bike for the first time last weekend and has still managed to challenge the front runners of the superbike scene at every race. Roberto Rolfo and Ruben Xaus should also be pleased - Xaus starting on his Ducati from grid position 22, but raced through the field to finish 7th and 8th, while new signing to superbikes for 2006, Rolfo steered his Ducati to a 5th and 7th place finish.

Australia's Andrew Pitt registered a ninth and a fifth for Yamaha - despite suffering from a torrid flu, but for Melbourne's Steve Martin and the Gold Coast's Karl Muggeridge the results were lacklustre. Martin could not back the speed of his qualifying efforts, which saw him start fourth on the grid, and only managed a 14th and 15th in racing on the underpowered Foggy Petronas, while for Ten Kate Honda's new dad Muggeridge it was literally a pointless weekend, retiring in race one and crashing out in race two when clipped by Ducati's Lorenzo Lanzi.

After round two, Australia's Bayliss (Ducati) is celebrating his return to World Superbikes - leading the champ-ionship on 75 points, with Britain's Toseland (Honda) breathing down his neck on 74 points and Australia's Corser (Suzuki) third on 63 points. Barros (Honda) sits fourth on 55 points after his second and third places for the Klaffi Honda squad.

The next round of the championship is at Valencia on April 23. 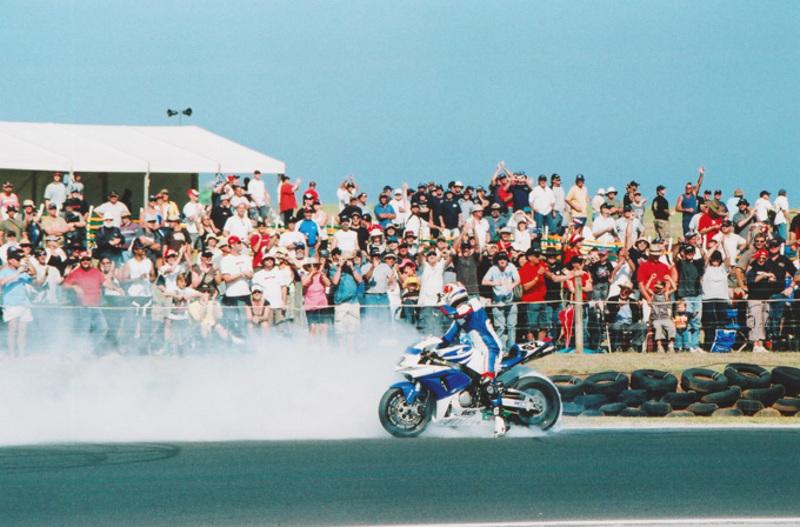 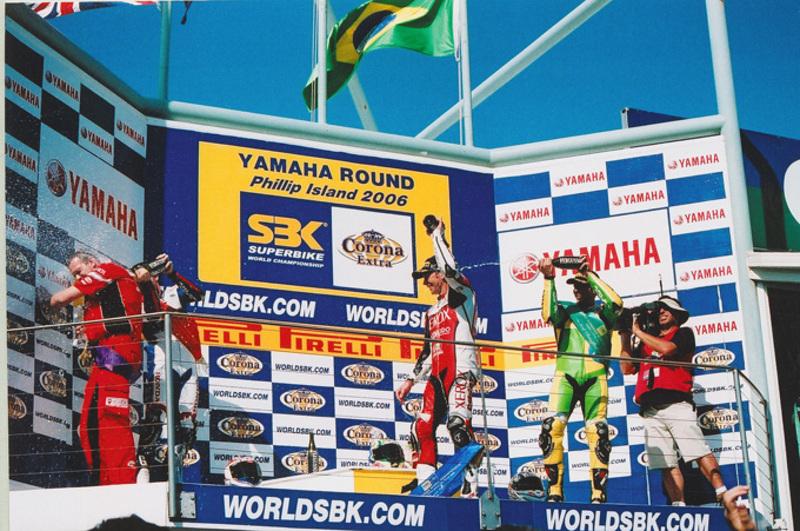 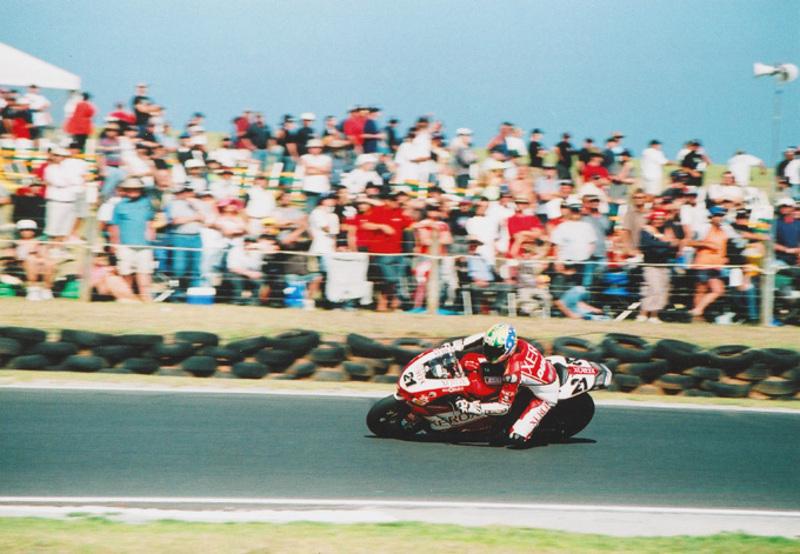 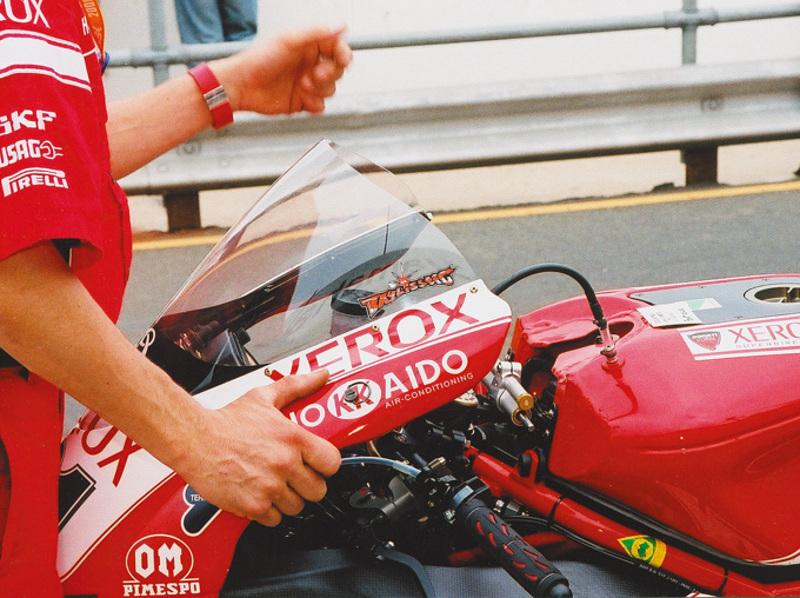