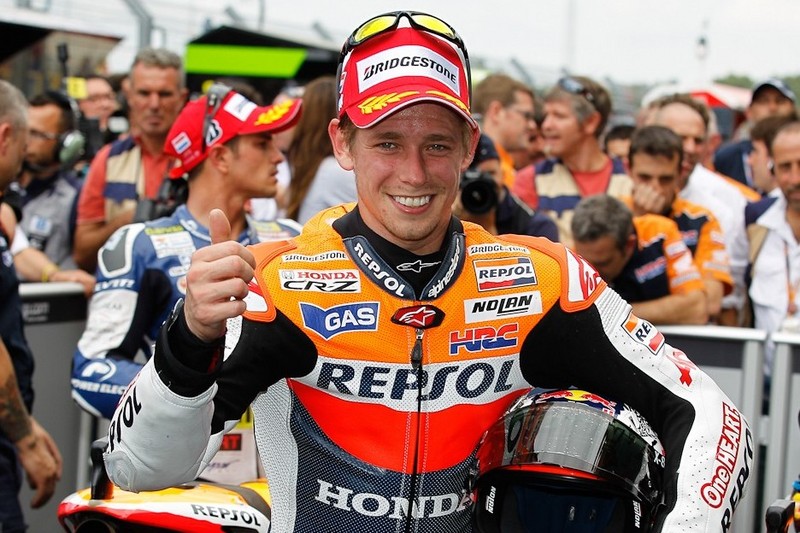 Stoner had qualified quickest, despite a heavy crash in Friday's practice session (the Assen MotoGP round is always run on a Saturday, not a Sunday) that saw him race with painkillers. Stoner's 1'33.713 pipped Repsol Honda team mate Dani Pedrosa to pole by a little over a tenth of a second (1'33.828), with Lorenzo completing the front row with a 1'34.001 qualifier. Row two was made up of San Carlo Honda Gresini's Alvaro Bautista, in his best-ever qualifying position so far, followed by Monster Yamaha tech 3's Cal Crutchlow and Yamaha Factory Racing's Ben Spies.

The race started with high drama as Bautista took out Yamaha Factory Racing's Jorge Lorenzo in the first corner, putting an end to both their challenges. Lorenzo was clearly upset about the incident, which was put under investigation by Race Direction. After this, the Repsol Honda Team pair of Dani Pedrosa and Stoner were left to lead the race, with Spies in pursuit.

Two laps in it was heartbreak for LCR Honda MotoGP's Stefan Bradl as he crashed out of fourth, making this the first race he has not finished in his rookie season. In the meantime, Ducati Team's Nicky Hayden had run into the gravel in the last corner, but managed to run his bike back on track.

As the Hondas started to pull out a small margin, the crashes continued at the back as Avintia Blusens' Yonny Hernandez ended his race in the gravel. With 19 laps to go Monster Yamaha Tech 3's Andrea Dovizioso went past Spies into third, with the pair continuing to dice for the final podium position. Crutchlow, who found himself in ninth after taking avoiding action at the Lorenzo/Bautista incident, was having a tricky time trying to pass the Ducatis of Hayden, Valentino Rossi and Pramac Racing's Hector Barbera. On the same lap, NGM Mobile Forward Racing's Colin Edwards retired with mechanical issues. With 14 laps to go, Crutchlow had passed Barberá into seventh, while Spies had made a move on Dovizioso back into third. A few laps later Crutchlow's charge continued as he passed Rossi into sixth to hunt down Hayden, who he passed on lap 15.

Power Electronics Aspar's Aleix Espargaró retired from the race with 11 laps remaining, putting a dent in his top CRT hopes. This was followed up a lap later with Rossi entering the pits with a chunk missing from his rear tyre, which was changed before he re-entered the race. Meanwhile, at the front, Stoner started to put a gap on Pedrosa, as the Spaniard looked to be struggling.

With six laps remaining both Hondas looked to be slowing, yet had pulled out a seven second lead over Spies, who was lapping a second a lap quicker. Further back, Barbera saved a near crash as he diced with Hayden for sixth. Three laps before the end Dovizioso had caught up to Spies again, and the pair were involved in yet another tussle for the final podium spot. The Italian made his move going into turn 1 on the final lap, and held on until the line.

In the end it was Stoner who took the chequered flag to go equal on points at the top of the championship with Lorenzo. Pedrosa finished second and Dovizioso took his second podium this year. They were followed by Spies, Crutchlow, Hayden, and Barberá, whilst the CRT contingent benefited from the numerous crashes, with Espargaró's teammate De Puniet taking top-placed CRT in eighth, ahead of San Carlo Honda Gresini's Michele Pirro and Speed Master's Mattia Pasini. Rossi finished in 13th, 0.002 seconds ahead of Paul Bird Motorsport's James Ellison. Cardion AB Racing's Karel Abraham did not start the race, as his hand injury proved too severe to race.

"To take pole position and now the win is really incredible," Stoner said in the post-race press conference. "A big thanks to my whole team who never gave up. My plan was to get a better start than I actually did, take some advantage and use the energy I had to try and make a gap and try to hold on to the end. We also knew that whichever position we were in, we had to preserve the rear tyre.

"It was a tough race, I had a lot of arm pump as I had to compensate for my injuries from the crash yesterday, but my fitness was good and the bike was working well in general. I'm sorry for Jorge, nobody wants to take points over a competitor in this manner, but as we can see, one race can change everything."

The verdict of race Direction on the Bautista/Lorenzo incident was to penalise Bautista with a back-of-the-grid start for the next race at Sachsenring. 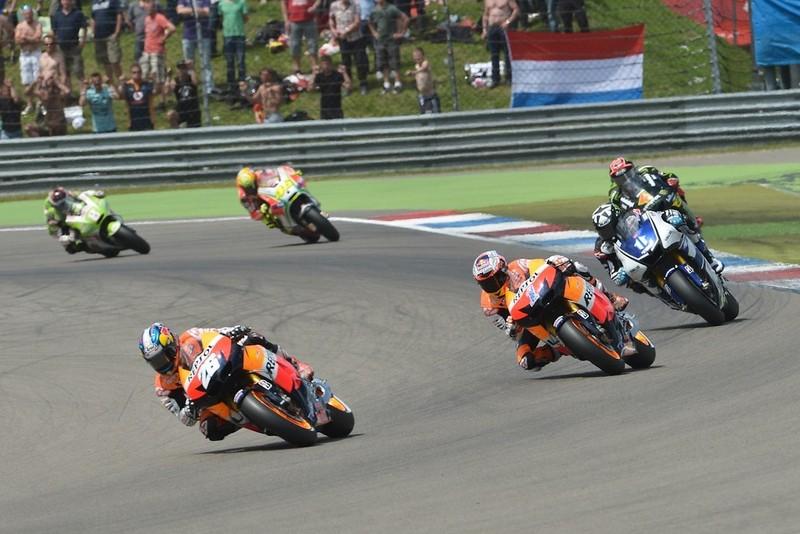 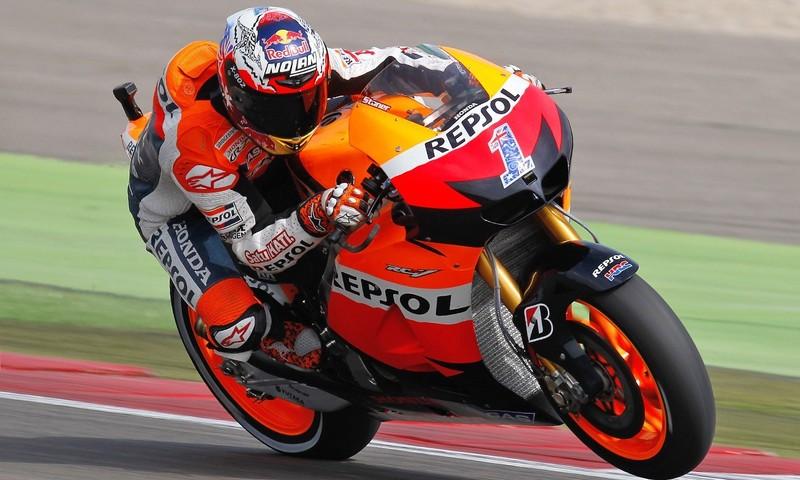 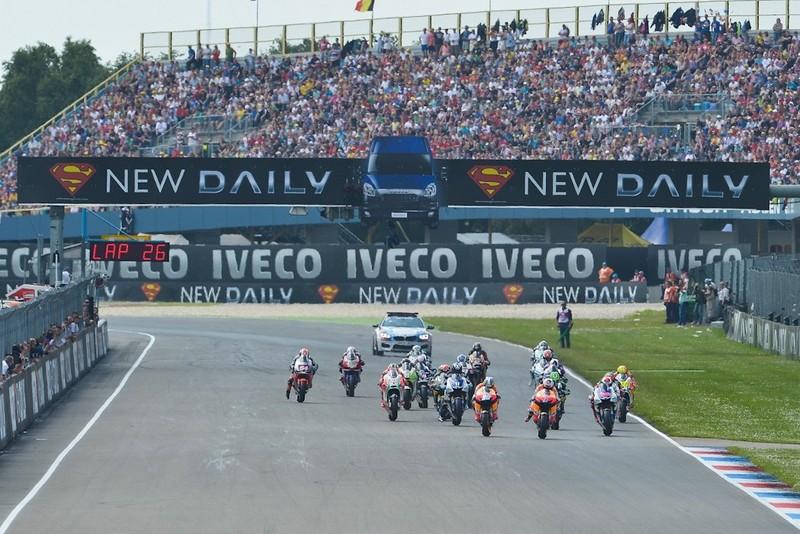 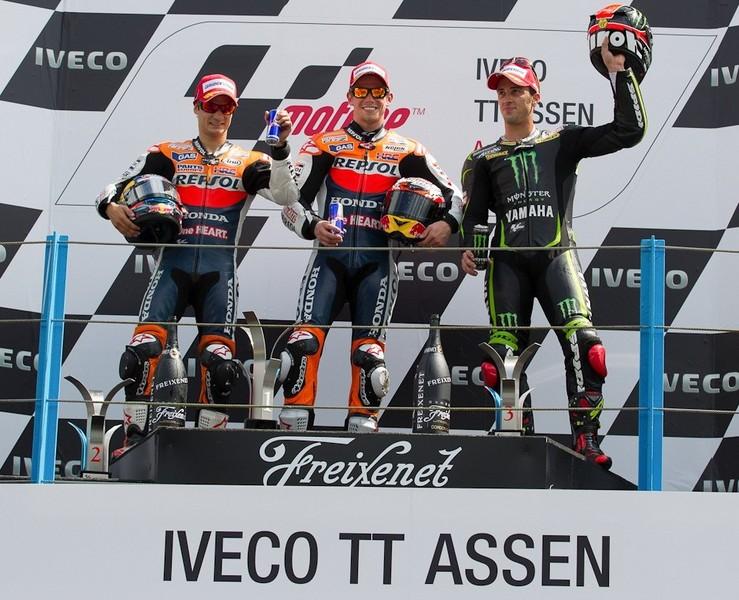 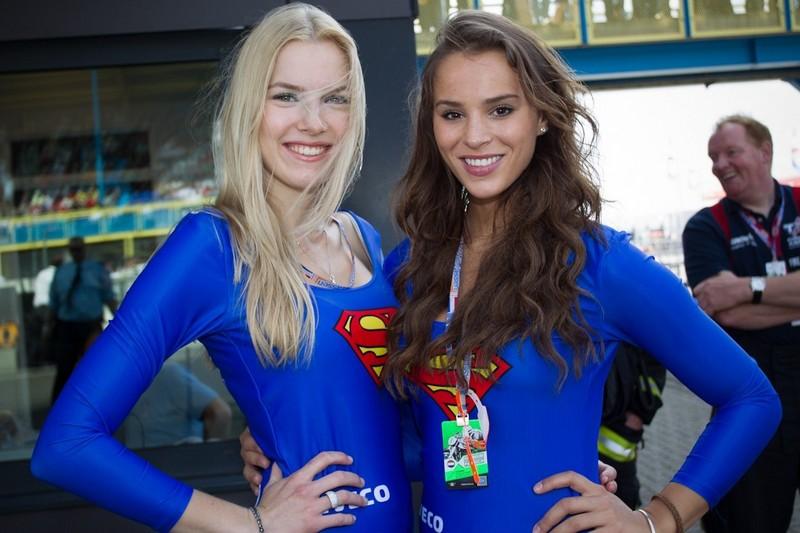