Royal Enfield have refreshed their 650 twins, adding new colours and cleaner, more efficient engines to what’s been their most popular model in Australia and New Zealand. 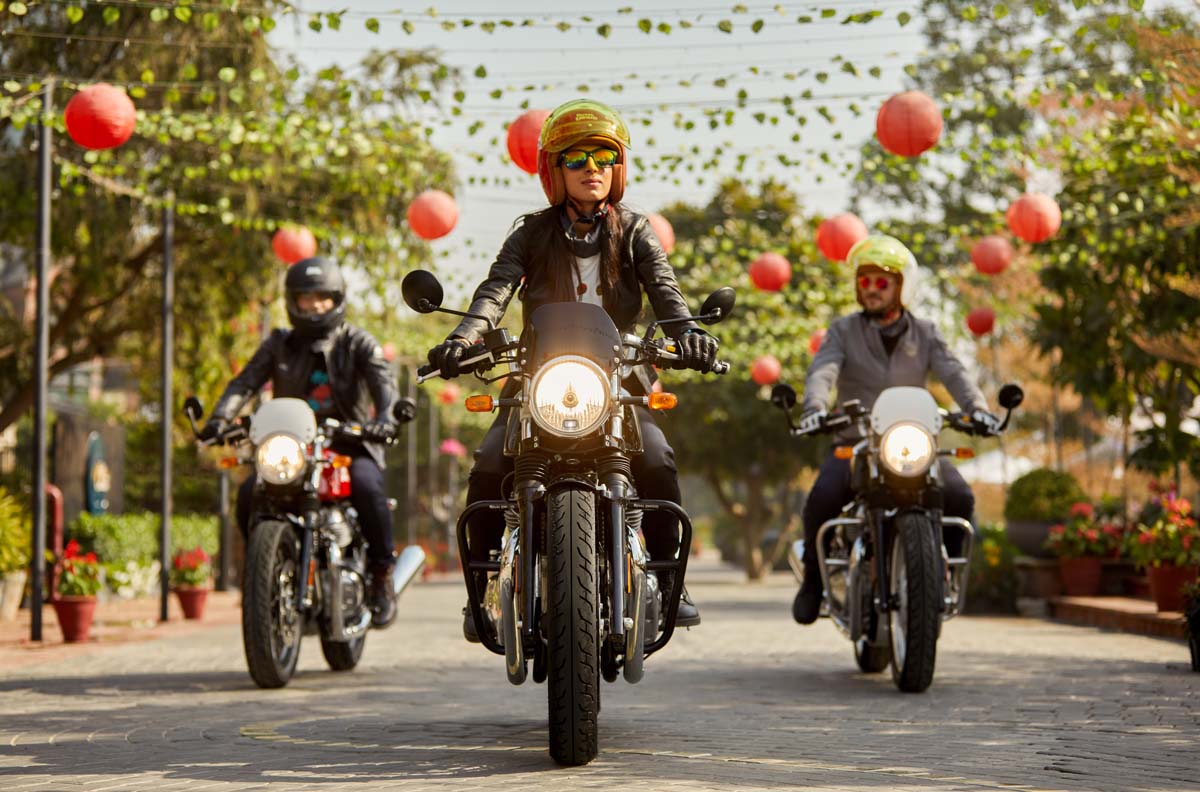 The first Royal Enfield models created with global markets in mind, the Continental GT 650 and Interceptor 650 were the result of collaboration between the manufacturer’s tech centres in India and UK. 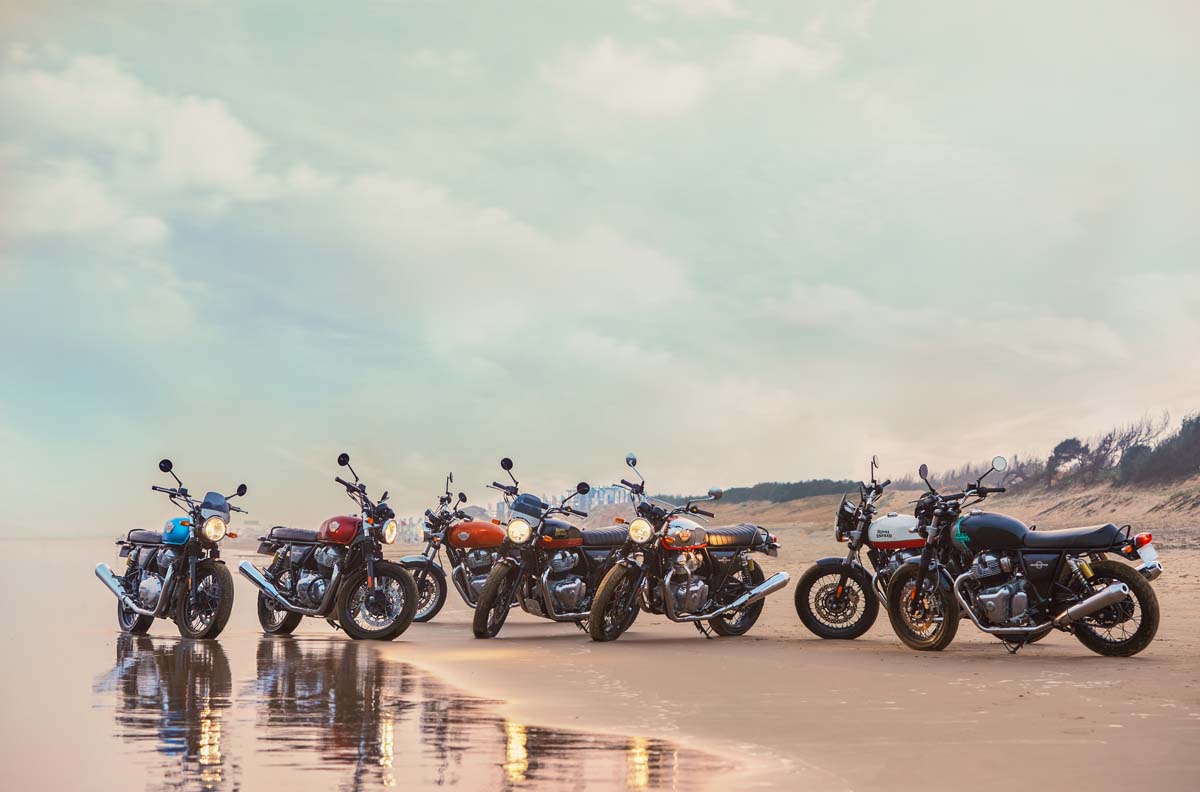 Since they were launched in 2018, more than 10,000 units of the Continental GT 650 and Interceptor 650 have been sold in the Asia Pacific region, accounting for just over 61 per cent of all Royal Enfield sales for the region. Of that 10,000+ total, Australia and New Zealand have accounted for more than 2,500 sales to date, with demand currently exceeding supply. 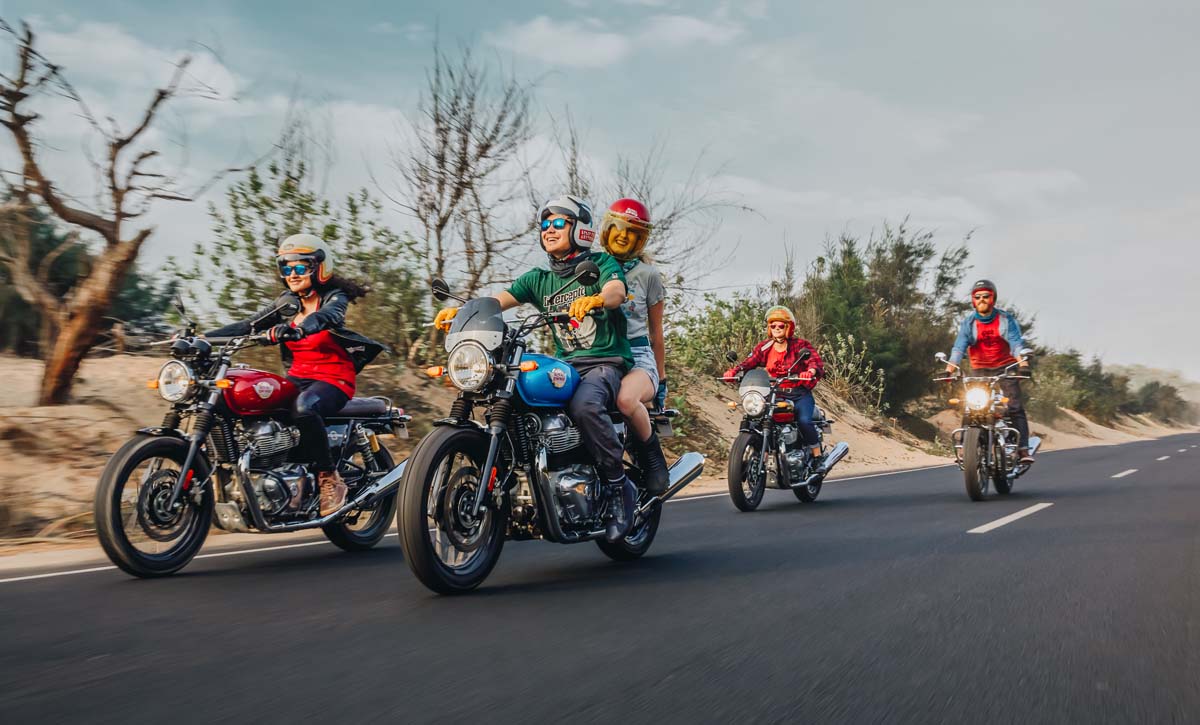 Given that success, Royal Enfield didn’t particularly need to update the two-model lineup, but with the introduction of EuroV compliant engines, some new colours and minor styling changes have been introduced for the pair, too. 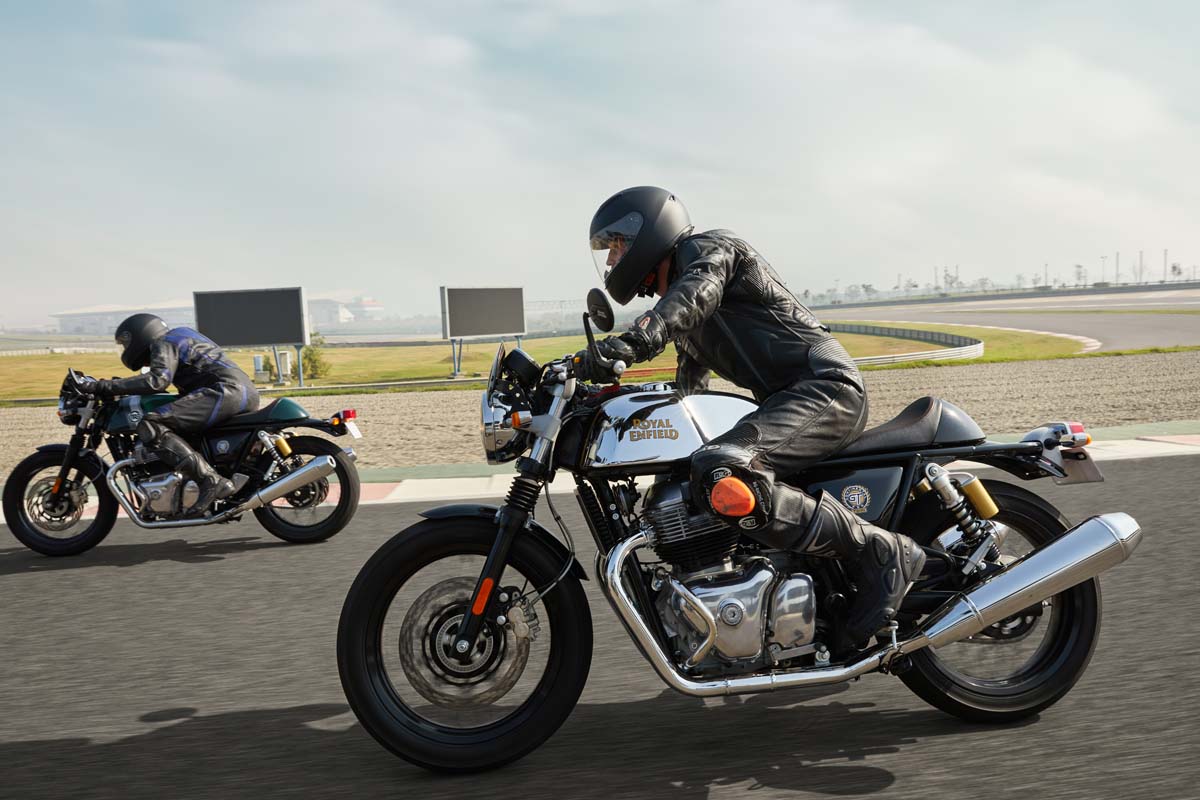 To achieve EuroV emissions compliance, there’s no change to the 650 twins’ capacity. And thankfully, there’s no reduction in power or torque, either.

What has changed is of a technical nature, including removal of the secondary air injection (SAI) system and updating the on-board diagnostics. The camshaft design has been changed, as has that of the catalytic convertor. 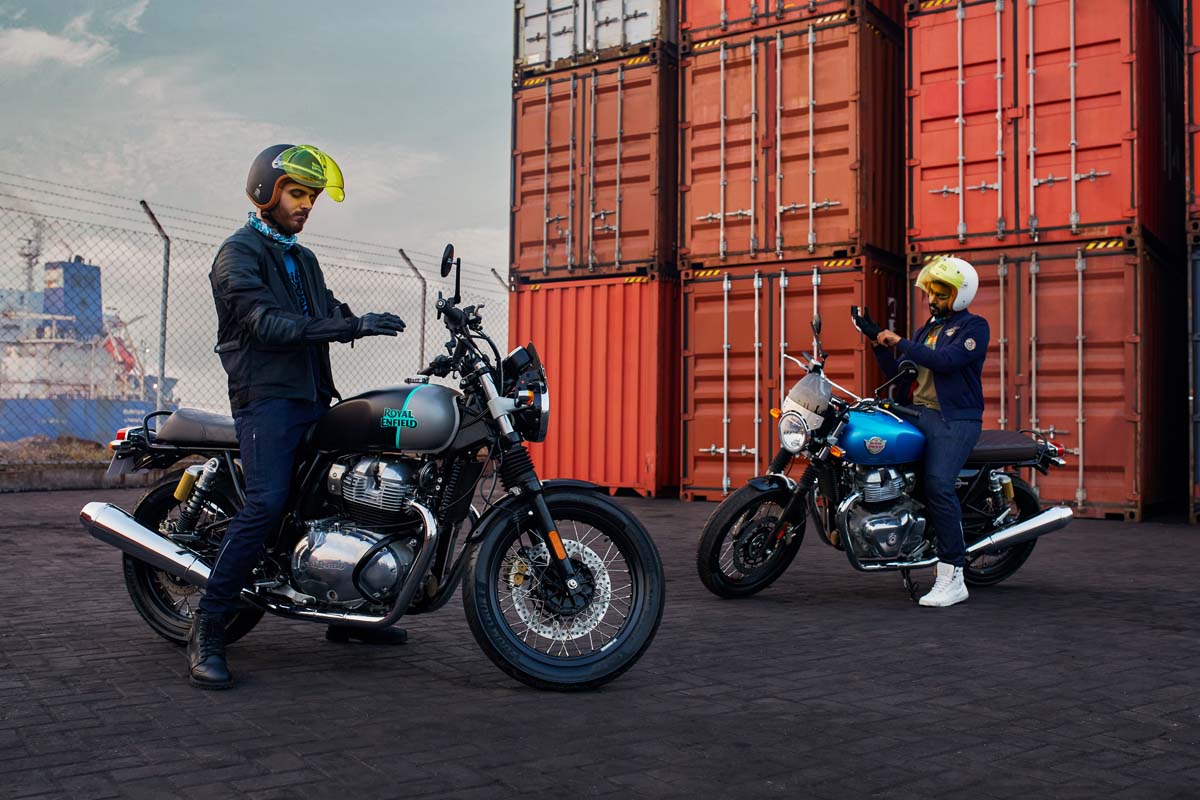 A high-power ignition coil has been added and there’s a second MAP sensor for the right-hand cylinder. This has required a change in that cylinder’s throttle body and a redesign of the wiring harness to suit.

There have also been changes made to the ECU (now a Continental type, instead of Bosch), O2 sensor, purge valve, magneto rotor design and left-hand crankcase mounting boss.

As mentioned, it’s all pretty technical stuff, but the important thing is that outputs haven’t changed with the move to EuroV compliance. 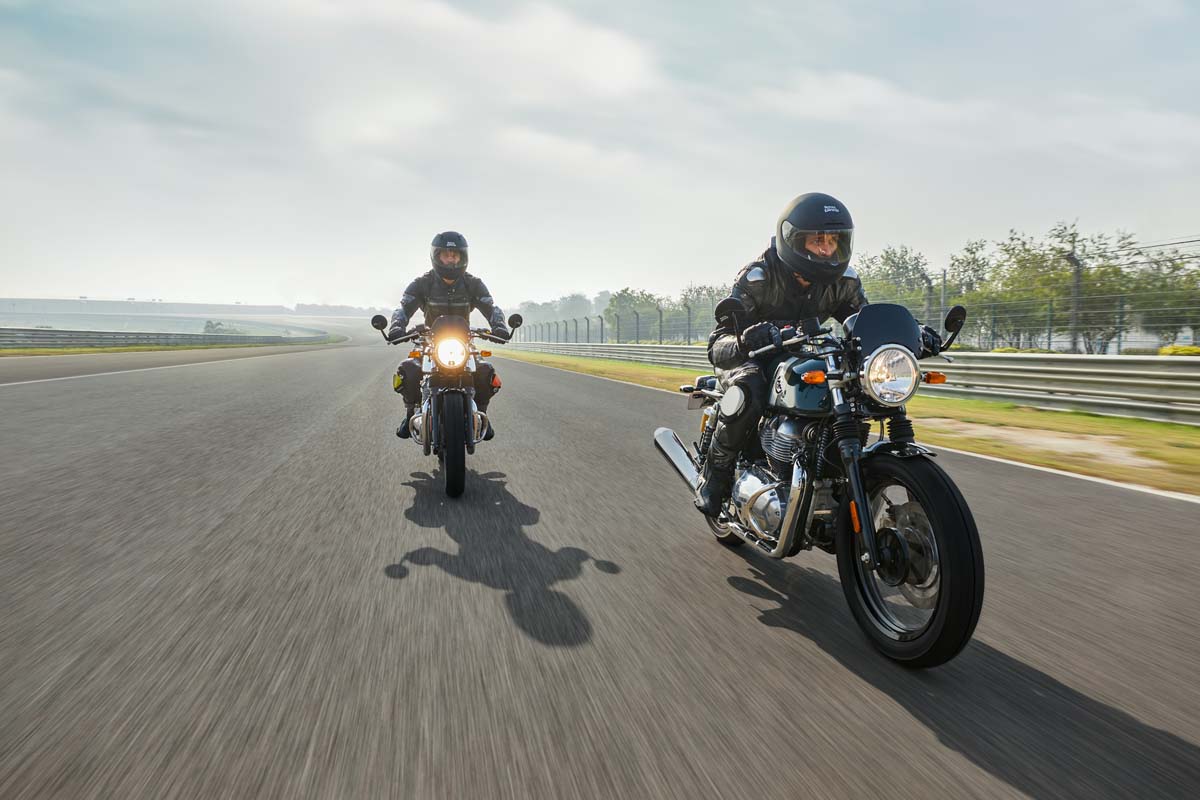 Elements beyond the engine, like the six-speed transmission, tele fork front and twin shock rear suspension, 18-inch wheels, disc brakes with dual-channel ABS and accessible seat height (804mm on the Interceptor 650, 820mm on the Continental GT 650) are all unchanged. 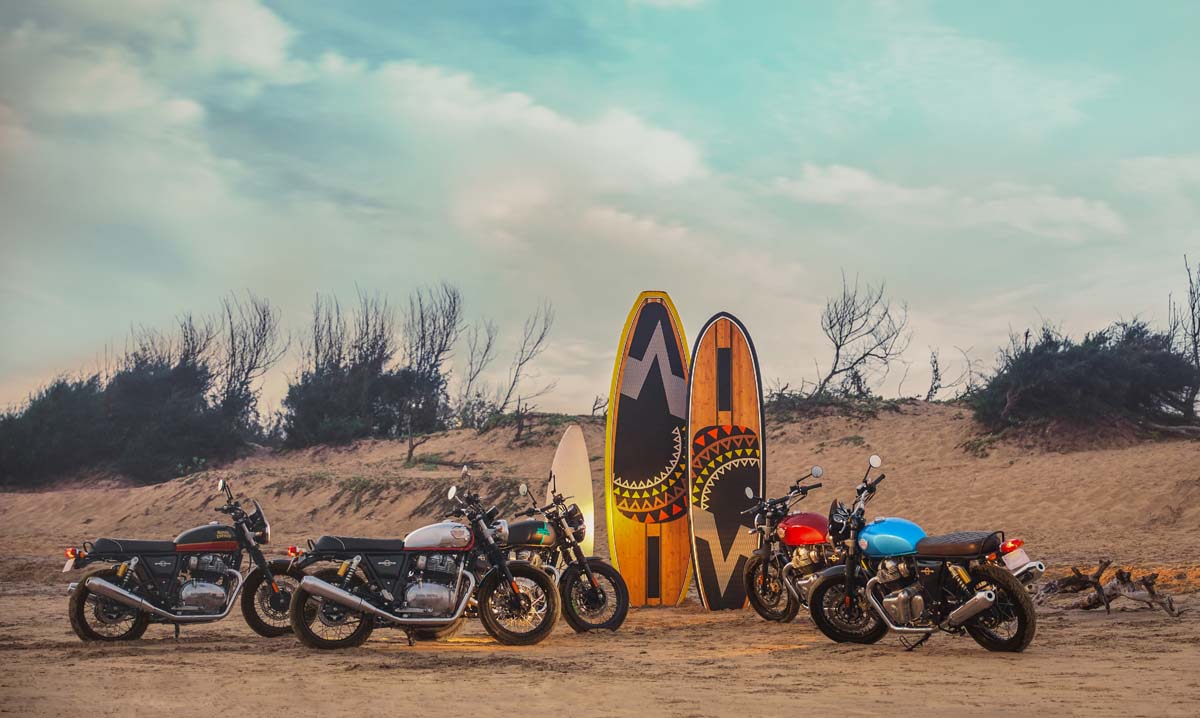 Since it was launched locally, the Interceptor 650 has accounted for around two thirds of 650 twin sales locally, and Royal Enfield expect the latest version to continue that trend.

The tagline for the updated version is ‘Easy Got Back’, which is a bit cringy grammatically, but it’s designed to communicate the laid-back, relaxed nature of this model, its smooth power delivery, along with how easy and fun it is to ride.

Much of the imagery and footage from the Interceptor 650’s launch material show a sun-drenched California lifestyle, evoking the 1960s, but still relevant today. 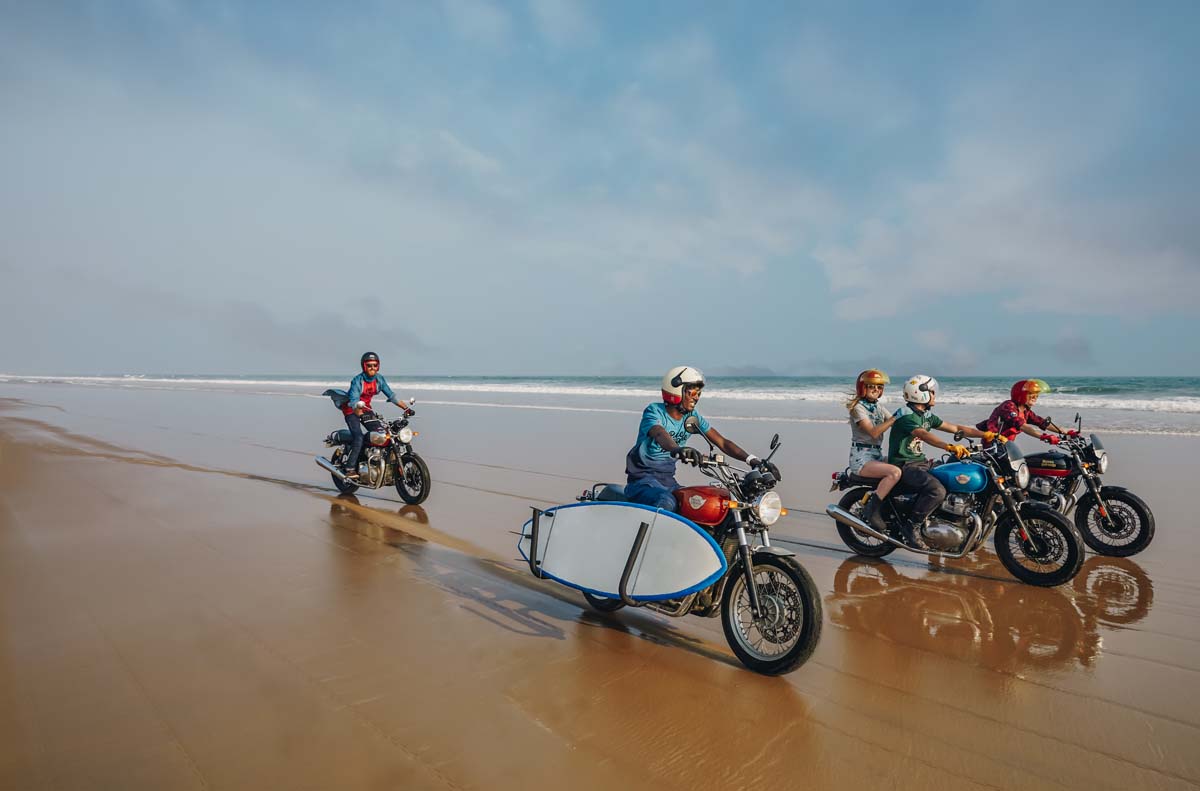 The ethic espoused by Royal Enfield for the Interceptor 650 is young, fun and carefree, for ‘Easy like Sunday Morning’ cruising under the California sun. This is reflected in the new colour options.

From a choice of seven colours, four are new, including Ventura Blue, Sunset Strip, Downtown Drag and Canyon Red, while the Mark Two “chrome special” has been updated.  Carryover colours are Orange Crush and the two-tone Baker Express.

Ventura Blue features a rich metallic mid-blue on the tank, and unlike Orange Crush, highlights this with blackout treatment of the mudguards, wheels, hubs and headlight shell. Canyon Red takes the same blackout approach to make the red fuel tank pop.

Sunset Strip is essentially the Baker Express, but with black in the upper section of the tank and gold Royal Enfield decals.

Downtown Drag is defined by a two-tone tank treatment, split vertically, with black at the rear and satin grey at the front, bisected by a turquoise green stripe that also traces the Royal Enfield tank decal.

Mark Two is the “chrome special” and defined by its chromed fuel tank, which is now edged in red. Aside from a chromed headlight shell, it’s blackout everywhere else, ditching the silver mudguards and polished rims of the previous version 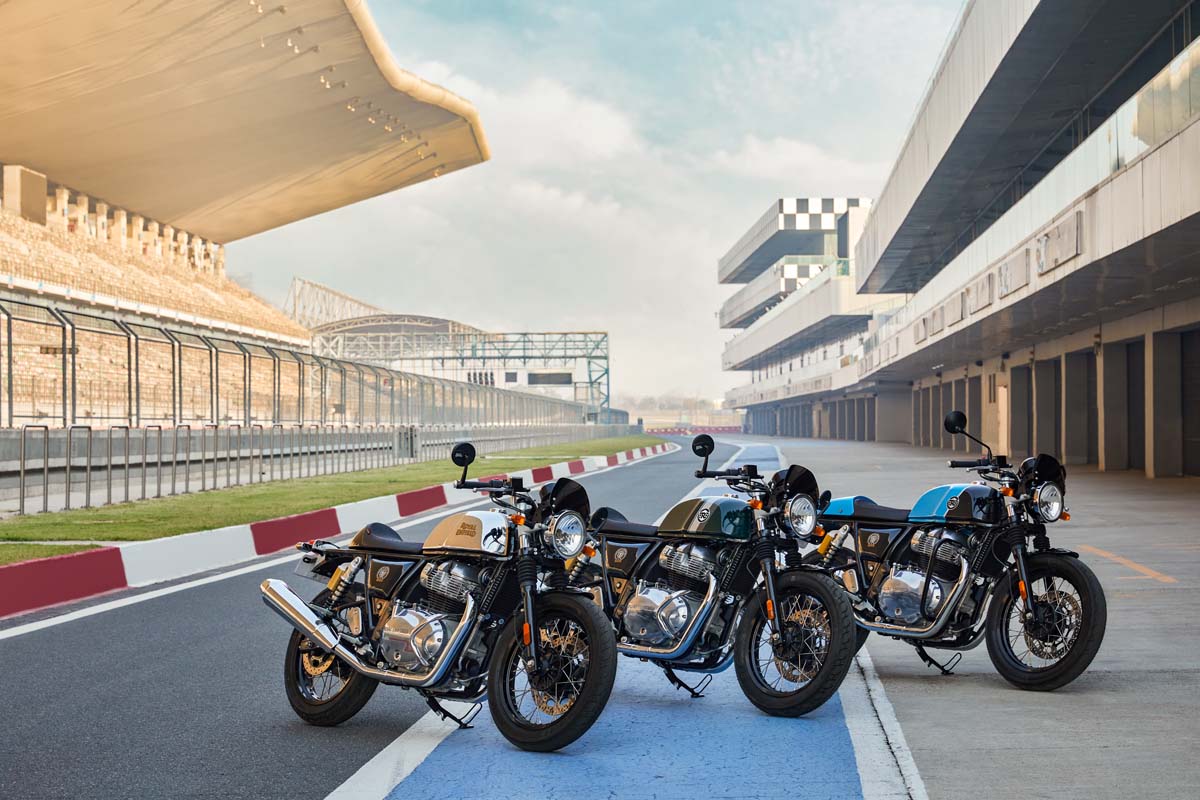 Accounting for around 35 per cent of local Royal Enfield 650 twin sales, the Continental GT 650 is the sportier version of this pairing.

With lower bars and rearset pegs, the Continental GT 650 riding position is a little more aggressive, but not radically different from that of the Interceptor 650. 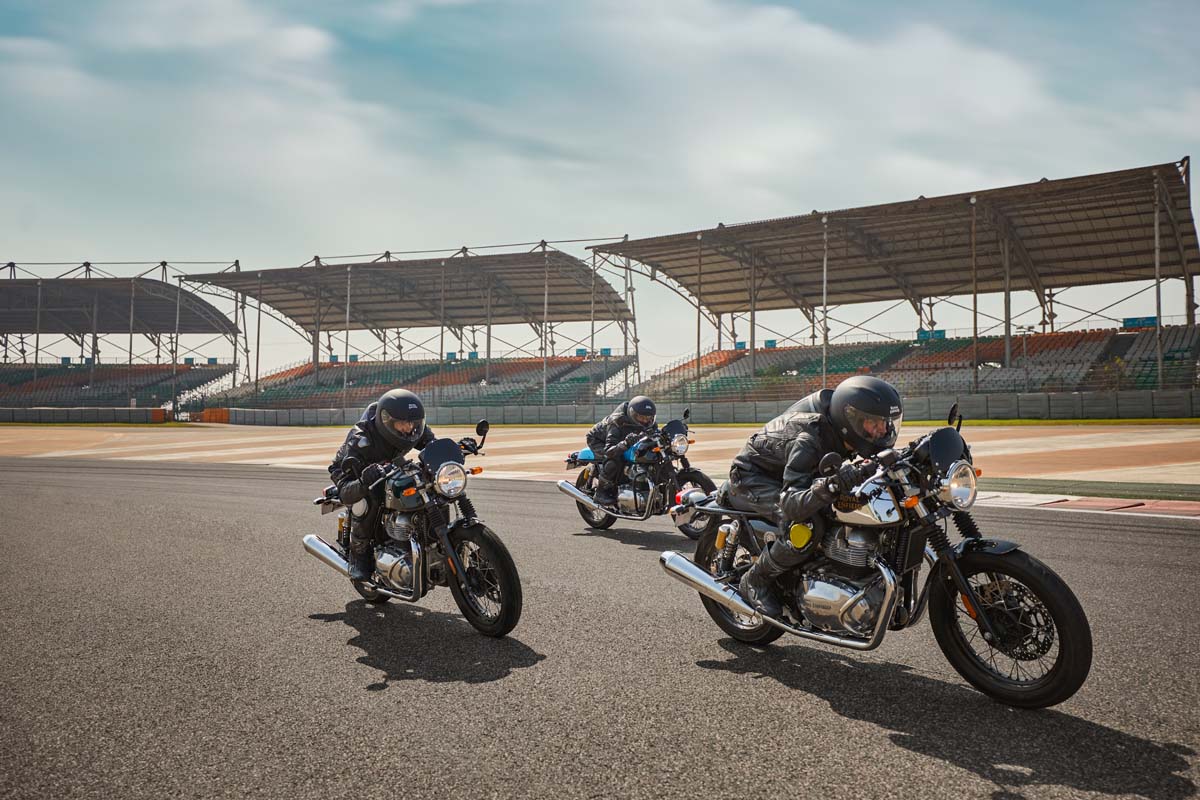 With its seat hump and bespoke fuel tank, the Continental GT 650 harks back to the café racer era of 1950s and ’60s Britain that Royal Enfield catered for at the time with the original Interceptor 250. This model was reimagined more recently as a 535cc single, and now as a 650 twin.

That café racer heritage is acknowledged in the tagline for the revamped Continental GT 650 – A Ton of Fun – which references the ‘Ton Up Boys’ that hit 100mph in their stripped-down and souped-up road bikes.

That “fun” ethos from the Interceptor 650 still applies to the Continental GT 650, though, as the engine, frame, suspension and braking componentry are shared between the two. Both allow you to enjoy the ride, but the Continental GT 650 allows you to do so with perhaps a little more sporting intent. 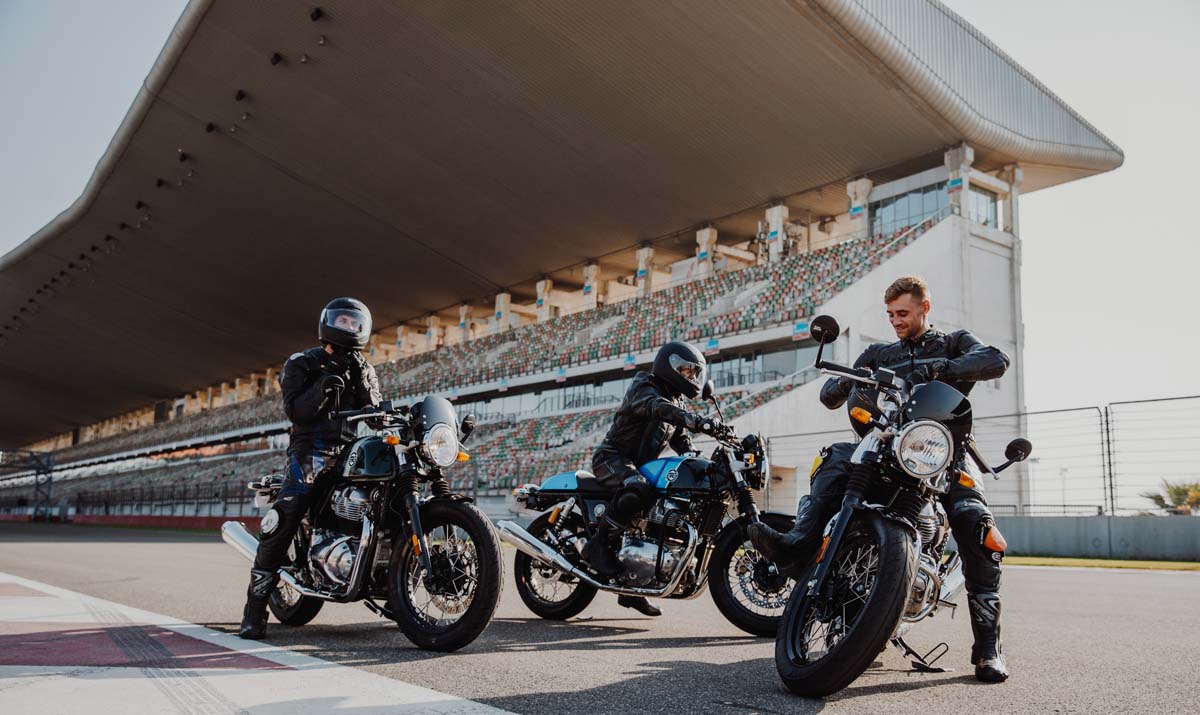 For this update of the Continental GT 650, four new colour options are offered, from Rocker Red and British Racing Green, to Dux Deluxe and Ventura Storm, while the existing Mister Clean chrome-tank option has been modified for this update.

Dux Deluxe and Ventura Storm are two-tone options; the former in white and black, the latter in blue and black. Both feature a gold tank stripe and black & gold tank decal, with the main colour also applied to the seat hump. Where the Dux Deluxe features polished wheels and hubs, the Ventura Storm paints these black.

Changes to Mr Clean are minimal. The chromed fuel tank remains, but the tank decal is now gold, while the wheels, hubs and mudguards are now finished in black. 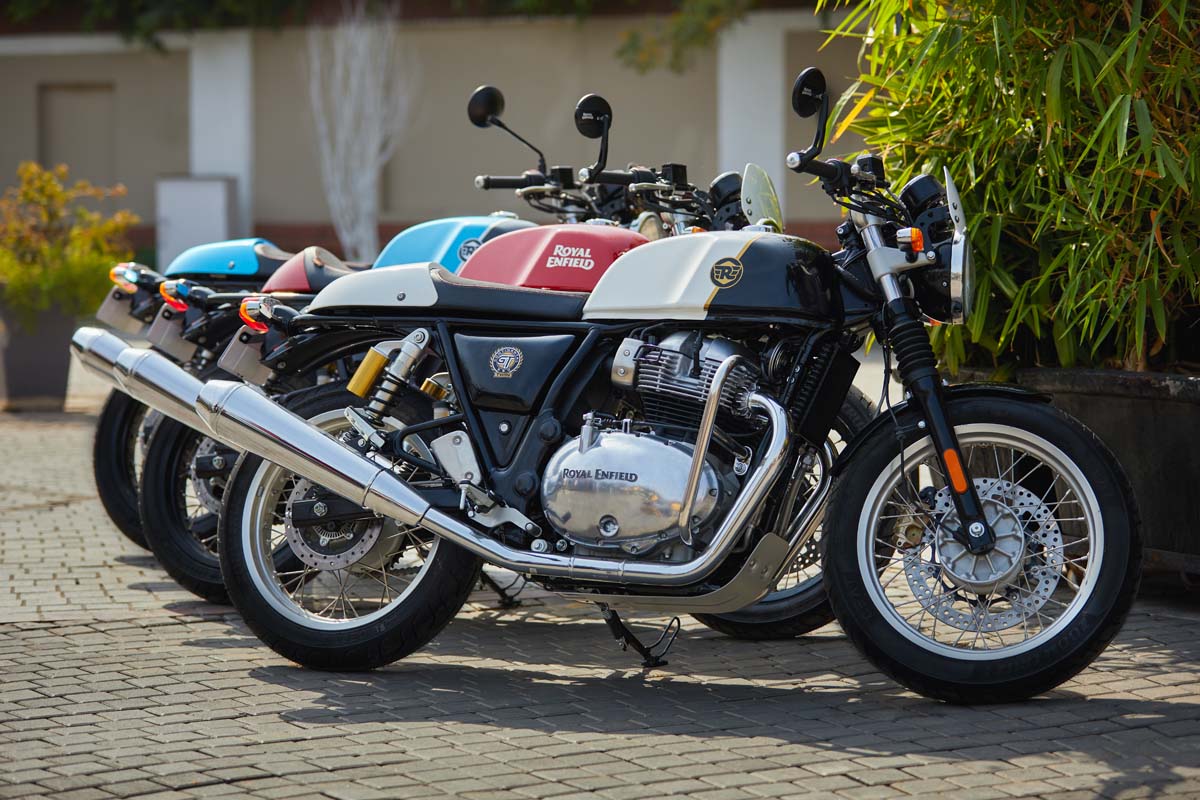 The updated Interceptor 650 and Continental GT 650 were scheduled to reach Australian Royal Enfield dealerships in October and New Zealand from November.

All updated variants are LAMS approved and backed by a 3-year, unlimited kilometre warranty and 24/7 roadside assist.

A multitude of accessories are available, too, with new soft panniers due to be added to that range.

Contact your Royal Enfield dealer for availability and further details. 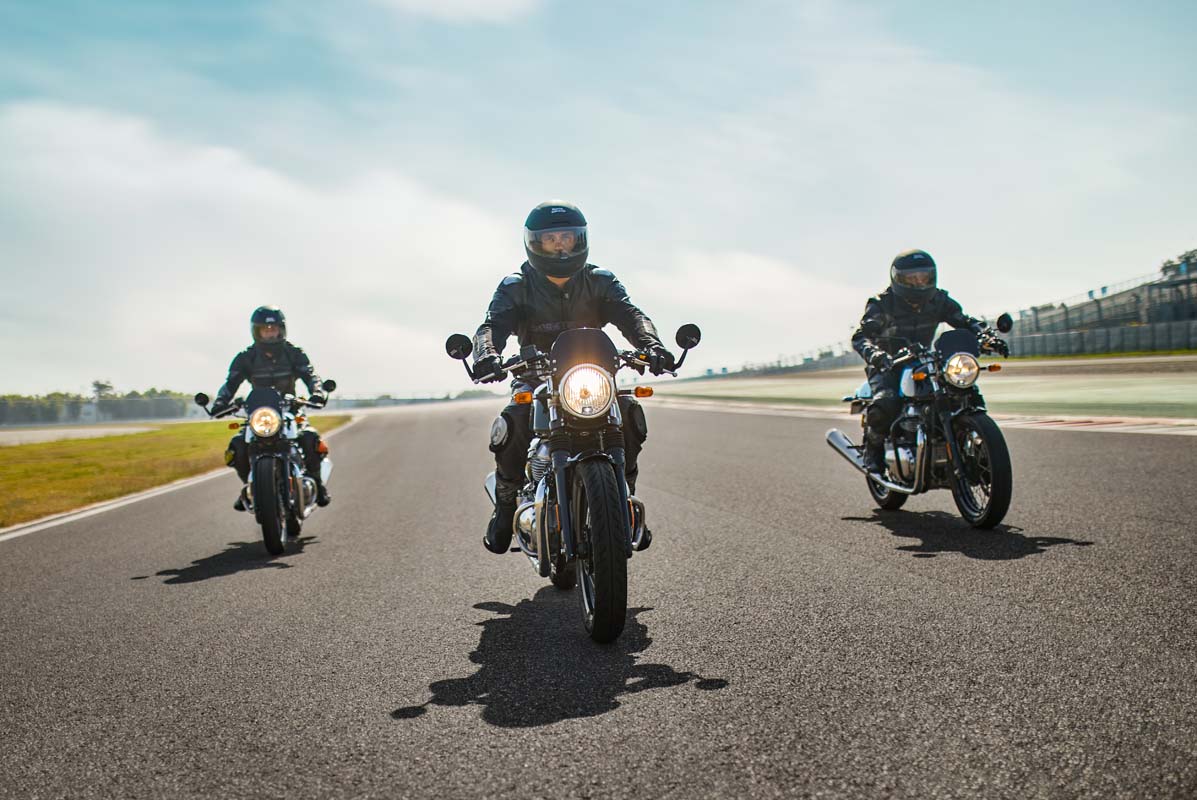