Royal Enfield’s expansion and modernization of their mid-size motorcycle range continues with the release of the ‘Meteor 350,’ a single-cylinder cruiser in the classic Royal Enfield style, but with an all-new frame and engine, plus a bespoke navigation system.

“We are delighted to add another exciting chapter in the story of Royal Enfield, which began 120 years ago in 1901,” says Vimal Sumbly, Royal Enfield’s Head of Business for Asia Pacific.

“The Meteor 350 is part of our strategy to cater to the rising demand for affordable leisure riding in our core middleweight segment.”

The Meteor 350 revives a name from Royal Enfield’s past, specifically 1952 when a 700cc parallel twin roadster using parts from the existing 500cc and 350cc models was launched. Coincidentally, this was the same year that Royal Enfield’s connection to India began.

From that original Meteor, the Super Meteor and Meteor Minor followed, as well as spin-off Sports variants, before the Meteor was replaced by the Interceptor in the early 1960s.

While the Meteor name then lay dormant for almost six decades, Royal Enfield's Indian operations were anything but, manufacturing basic but robust motorcycles, initially for the Indian Army, then the domestic market. Those early Indian models would form the backbone of Royal Enfield’s current range.

The Meteor name may have a long history, but the idea of a Royal Enfield cruiser is more recent, dating to the 1990s when the ‘Citybike’ and ‘Lightning’ added cruiser styling touches, like buckhorn handlebars, a low saddle, peanut tank and pillion backrest, to existing Royal Enfield platforms. 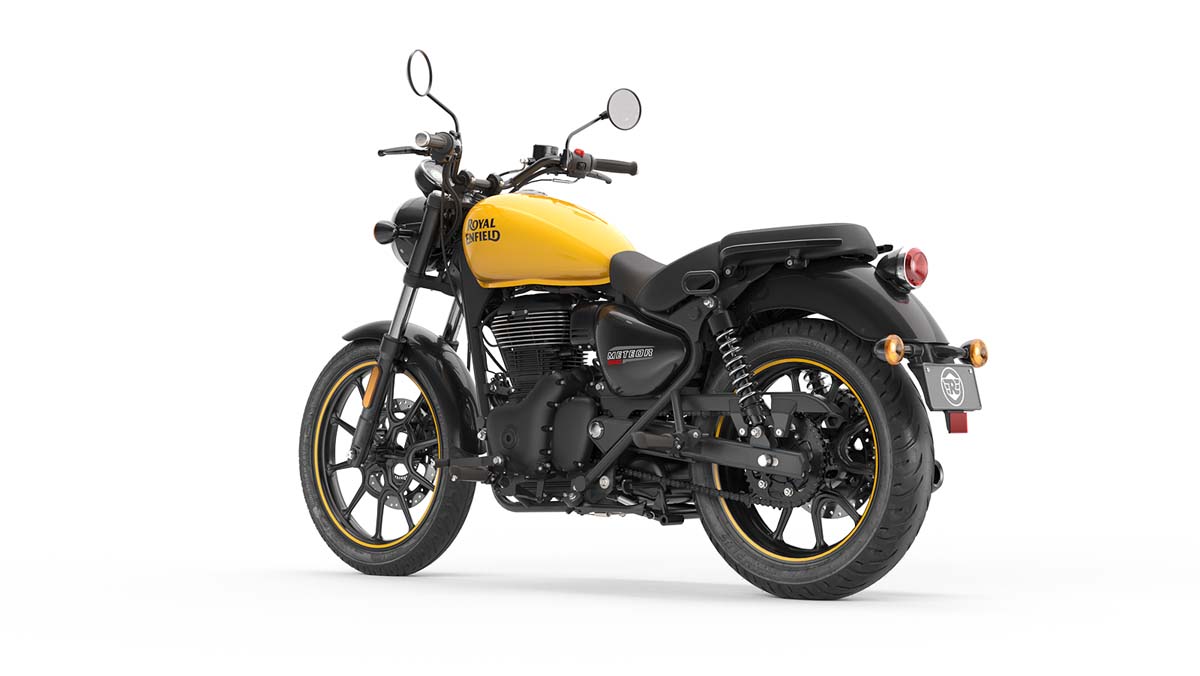 In 2002, the Lightning evolved into the Thunderbird, initially in 500cc form, with a smaller 346cc version following, both of which featured more cruiser-specific styling.

The Thunderbird was the longest running and most successful cruiser in the Indian market. In 2018, the 350 version reached Australian shores, rebadged as the Rumbler, but virtually identical to the Indian market model in every other way.

Last year, new emissions regulations meant the Thunderbird was discontinued, paving the way for the introduction of the Meteor 350.

While retaining Royal Enfield’s heritage-inspired styling cues and the brand’s all-important DNA, the Meteor 350 is an all-new machine. 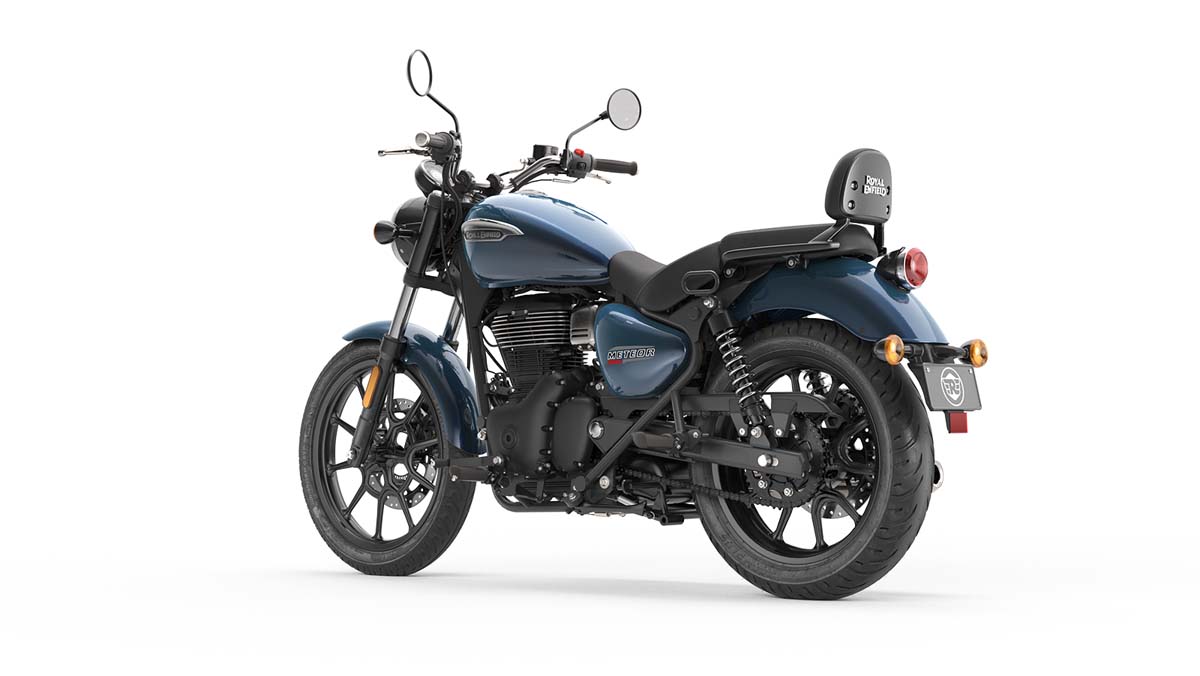 Where the Rumbler 350 retained a kick starter, the Meteor 350 is electric start only, reflecting the mechanical modernisation of the Royal Enfield range. Throttle response is said to be optimised for dependable starting and linear acceleration, with a top speed in the 115km/h range and the ability to sit on 100km/h without stress.

A balancer shaft on the engine greatly reduces vibration at speed compared to older Royal Enfield singles, without compromising the distinctive note or the sort of torque expected out of a cruiser.

The engine is matched to a five-speed gearbox with overdrive fifth gear to deliver what Royal Enfield says is stress-free and economical highway cruising, while a seven-plate clutch makes for easy gear changing in stop-start city traffic.

Fuel economy figures for the Australian market have not been released, but overseas reporting suggests a very frugal 2.4lt/100km, which equates to a range comfortably in excess of 500km from the 15-litre tank.

The Meteor 350 frame is all-new, too, even though the twin-downtube cradle configuration isn’t.

Designed to offer the sort of flex needed for manoeuvrability, while remaining rock-solid for highway cruising, the frame accommodates a low centre of gravity and the Meteor 350’s 765mm seat height. 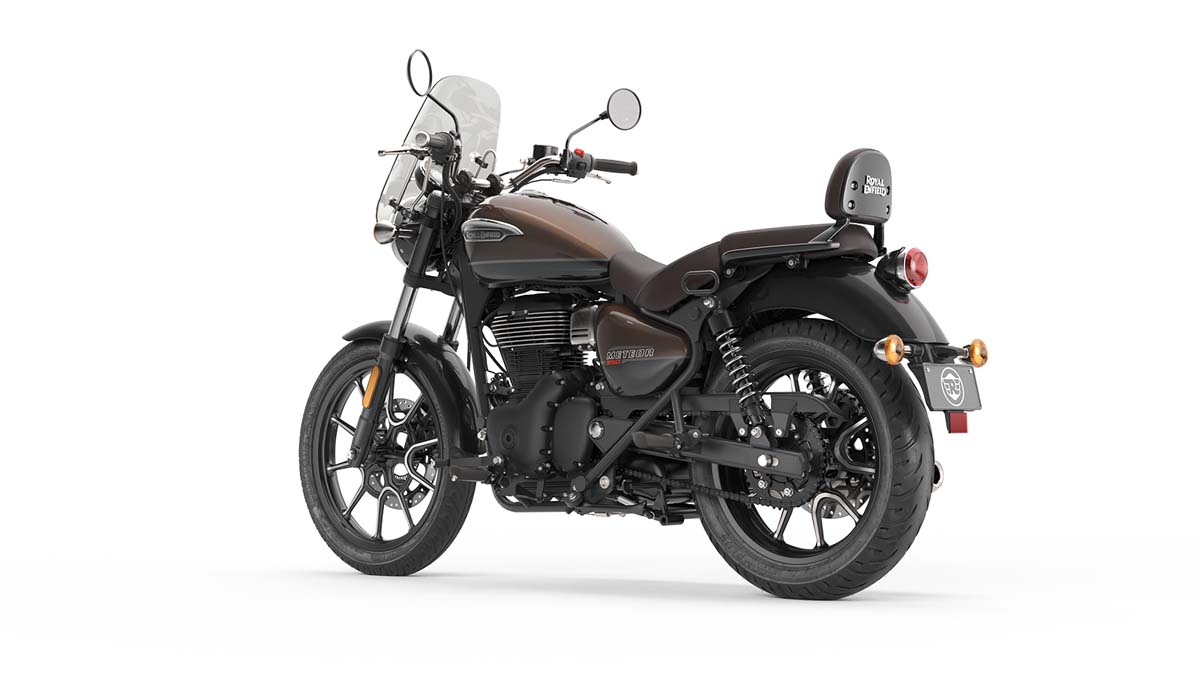 In terms of suspension, the Meteor 350 offers the same 41mm front end with 130mm travel as the discontinued Rumbler 350, but the twin shock rear is upgraded to offer six-way preload adjustability.

A 19-inch front and 17-inch rear wheel combination is cruiser-friendly, while the 100/90 and 140/70 tyres ensure the Meteor 350 will have some capability when tarmac roads turn to gravel, too.

Braking is an upgrade from the Rumbler, with a 300mm front disc brake, 270mm rear disc, ByBRE calipers and standard dual-channel ABS. It’s not a huge combination, but enough to haul up the Meteor’s kerb weight of 191kg. For the record, that’s 1kg lighter than the outgoing Rumbler 350. 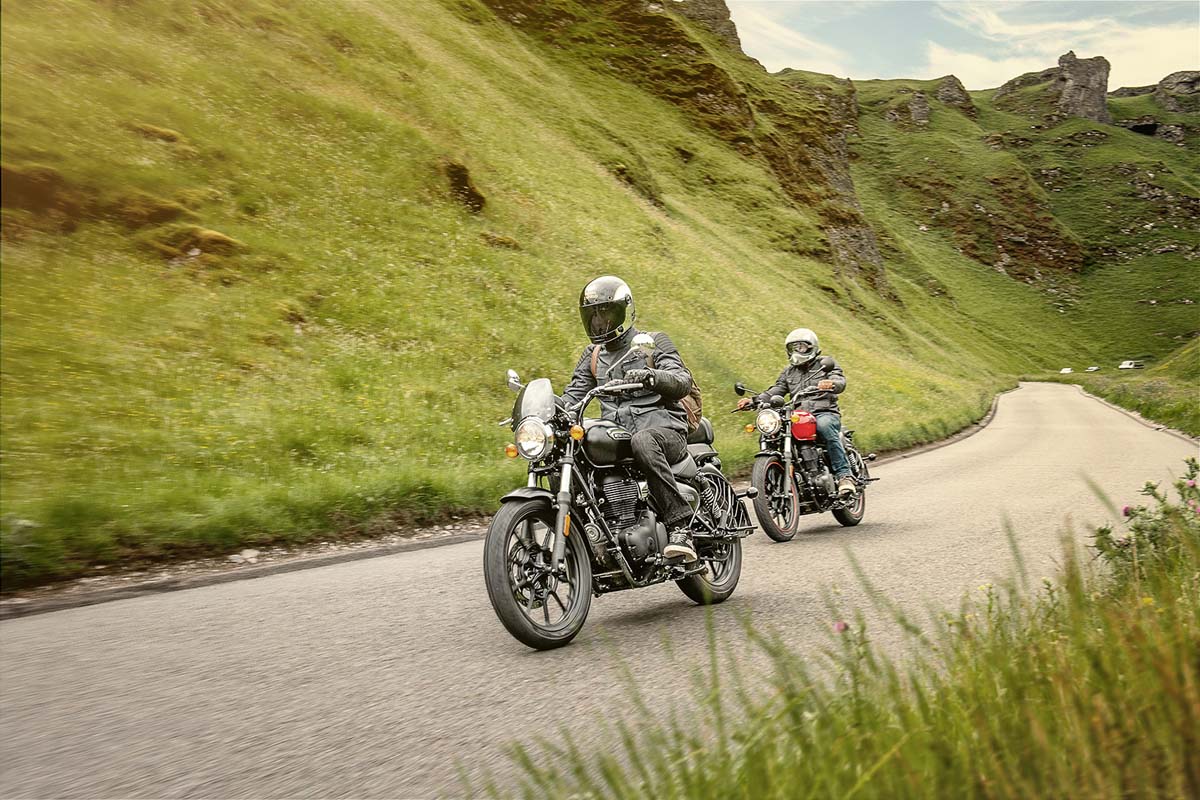 Despite its cruiser ethos that includes a wide, low saddle, forward-mounted pegs and heel-and-toe shifter, the riding position is close to neutral, making the Meteor 350 a viable proposition for day-to-day commuting as well as weekend cruising.

“It is easy, very comfortable with excellent ergonomics, and absolutely enjoyable for long distance riding and highway cruising, while being great within the city as well. The motorcycle’s poise, its agile handling and up-rated braking, result in an unmatched ride experience.”

Paired via a Royal Enfield App to the rider’s smartphone, the Tripper is described as providing the navigation information you need, but not enough to distract. Instructions are presented in simple graphic form on a secondary instrument pod. For example, an upcoming turn is indicated as an arrow that “fills” with colour as the next turn draws nearer, then flashes when the turn is imminent.

Cleverly, for rides where you don’t need route instructions, the secondary pod serves as a clock.

Fireball is the entry-level variant, available in red or yellow tank colours, with matching rim stickers and blacked-out exhaust and engine parts. The mid-range Stellar extends the colour palette to three options – red, blue and matte black – with a chromed exhaust and handlebar, tank badge (instead of a decal) and pillion backrest as standard. The top-spec Supernova is available in two-tone brown/black or blue/black, with two-tone seat trim options, machined detailing on the wheels, chromed indicator shells and a windscreen as standard.

Across the range, standard features include a Halogen headlight with LED DRL, LED tail light, combination analogue/digital instrumentation and a USB charge port.

A range of genuine accessories will be available to suit the Meteor 350, from engine and sump guards, to windscreens, touring seats, luggage, slip-on mufflers and more. Riding gear and casual wear will be part of the range, too.