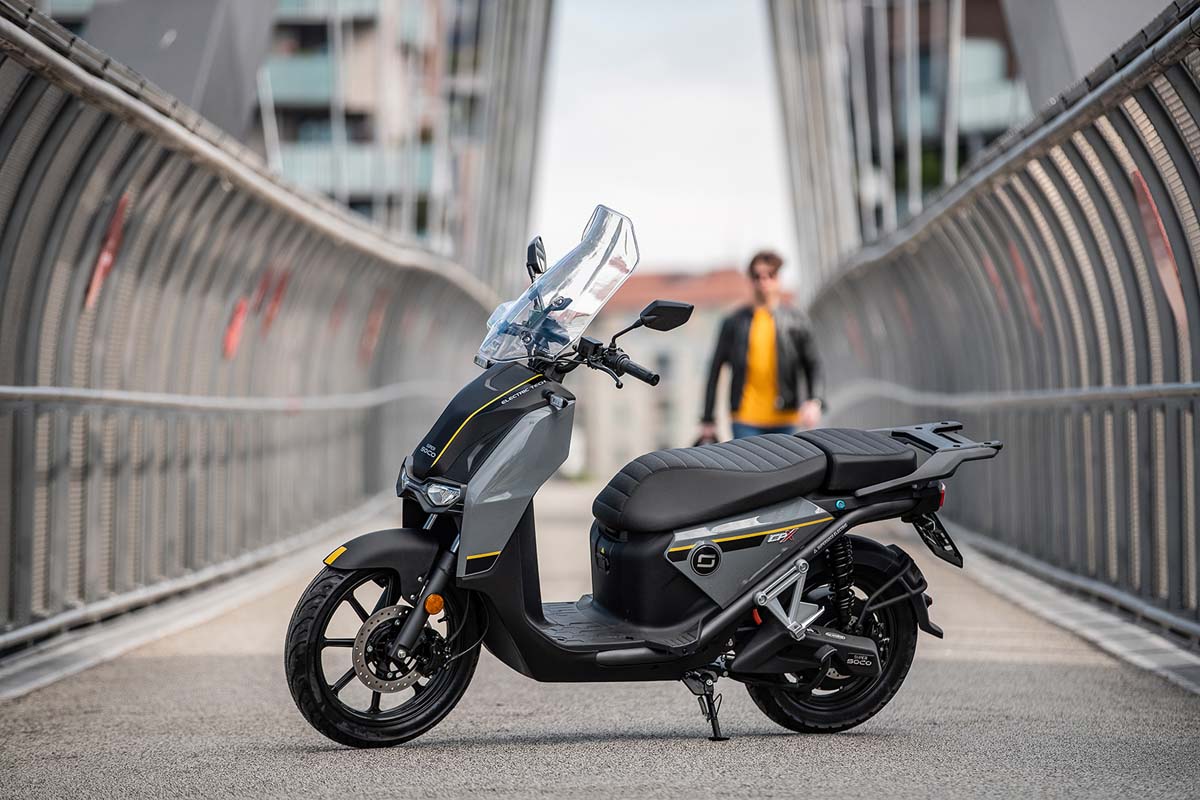 Super Soco is a relatively new arrival in the Australian motorcycle market but they appear to be making more of a go of it than past brands. 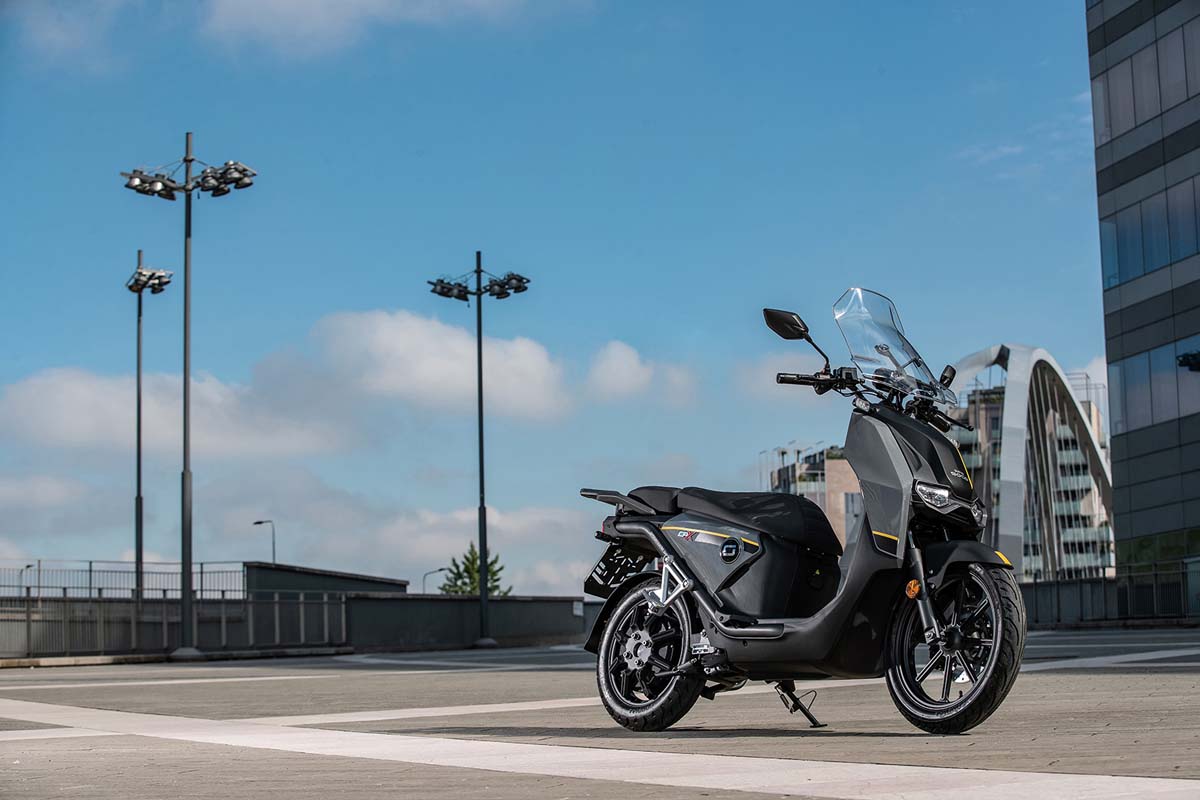 Their range currently includes the TC Max and TC Café motorcycles, as well as the CUx and CPx scooters – all of which are electric.

I recently had the CPx scooter on test, which is the larger of the two EV scooter offerings.

The CPx made its Australian debut earlier this year, and according to Super Soco, has been designed to meet the needs of the aspiring urban professional.

The CPx is powered by a 4000W Bosch electric motor rated at 4kW and 171Nm. While the torque figure is amazing, power is about on a par with a 125cc engine, which is pretty meagre, as became apparent during my test.

The motor “revs” to a listed 750rpm and can propel the CPx to a claimed top speed of 90km/h.

Fuelling this hub- and swingarm-mounted motor is a 60V 45Ah lithium-ion battery that’s a simple plug-and-play unit. Removable for recharging in the home or office, the battery can also be recharged in-situ, which may be the better option, as it weighs a substantial 20kg.

Recharge time is listed at 3-4 hours and the battery’s good for 1,500 recharge cycles, so it should last the life of ownership.

The battery’s mounted under the seat, where there’s enough space to take a second battery and the CPx is set up for this. Listed range is up to 75km from a single battery, so adding a second almost doubles this to a claimed 140km.

Only one battery is fitted as standard, and while Australian pricing for a battery on its own isn’t provided, overseas pricing suggest it’d add around $2,000 to the purchase price.

So, is a second battery worth the extra cost? If you don’t want to be mucking around with regular recharging or if longer rides are part of your itinerary, it may be worth the investment, but I would imagine most CPx users will be able to co-ordinate their charging on a single battery.

The other factor with this is that adding the second battery takes all the underseat space, which isn’t that great to begin with. The space is awkwardly-shaped, too, so only certain items will fit.

Other CPx specs include disc brakes – 240mm front and 180mm rear - in a Combined Braking System (CBS) that's a linked set-up and shouldn't be confused with ABS, as it doesn't modulate brake pressure the way ABS does. 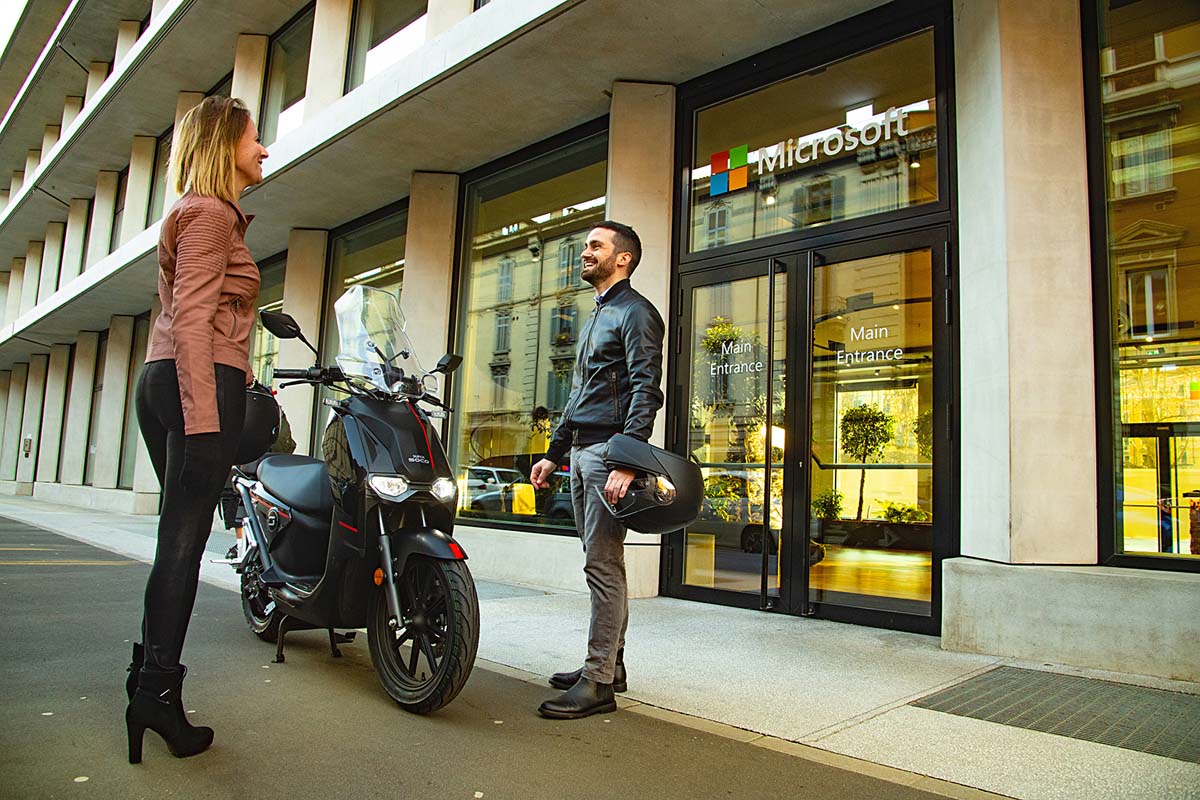 The wheels are “full size” 16-inch front and 14-inch rear, there’s LED lighting all round, an LCD dash display, a large windshield, rear carrier frame, keyless unlocking (although you still need a key for starting), built-in alarm and a USB charge port, while the listed seat height is a manageable 760mm and weight is 107kg “dry”, so around 127kg with one battery. 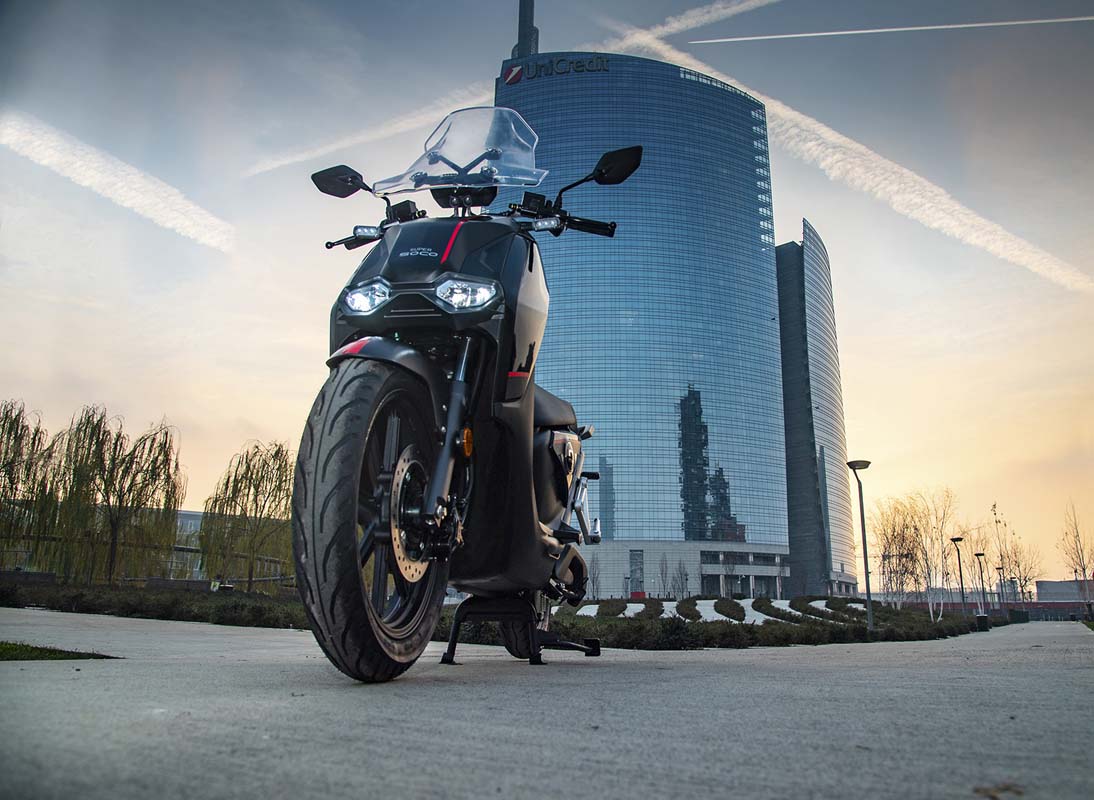 The Super Soco CPx is available in three colours – Sonic Silver, Phantom Black and Titanium Grey. My test unit was the latter colour and while it looked pretty cool, I must say my favourite is the Phantom Black with its slim red coachlines on the flanks, front mudguard and legshield.

The Titanium Grey CPx adds some black highlights and yellow pinstriping, while Super Soco makes sure you know what you’re riding, with ‘Electric Tech’ and ‘SuperSoco Electric’ identification featuring at various points on the frame and bodywork.

Overall, the finish is good, everything fits together and looks to be well made. The larger wheels make for a nicer ride than some smaller scooters on 12-inch wheels, while the LED lighting, including the DRL, is suitably powerful and nicely incorporated into the design.

Switchgear is straightforward, with indicators, high/low beam and horn on the left switchblock, while the start/stop, power mode selector (more on that shortly) and a reverse gear selector is on the right.

The reverse gear is something I wasn’t expecting and seems superfluous on a scooter, but I’m sure it has its uses, especially with a pillion on board or a top box loaded with gear.

The other thing I wasn’t expecting was how comfortable the saddle is. Motorcycle/scooter seats can be a bit hit-and-miss, but the CPx seat is one of the better units I’ve experienced of late – wide and plush, but still supportive and with that grip you need.

Overall, the CPx’s ergonomics suited me well, but a friend who’s 6’2” found the riding position cramped.

Start the CPx up and you’re greeted by . . . nothing. The almost silent operation takes some getting used to and I’m sure several new owners will have shared my experience of wondering if the scooter’s still running while stationary.

Having ridden various internal combustion engine scooters in the past, some sound like I’m wringing their neck, even at low revs, so the ‘quiet space’ of the CPx was welcome – once I got used to it!

The CPx is easy to ride, with good handling, aided by those larger wheels, while the suspension is well set up and allowed confident cornering. Corner too hard and you will scrape the centre stand, though, which hangs a little too low for my liking.

Braking was good, too, but the stopping power from the front disc was a little less than I was expecting, even with the CBS, so biasing the rear brake when stopping was a practice I soon adopted.

I was also impressed with the LCD instrument display, which prioritises all the important info, but still has displays for other things like temp, clock, power mode, battery level and more.

Having heard about the instant acceleration of electric vehicles, I did have expectations of the CPx being able to deliver an impressive initial burst of power. I ended up disappointed.

While I wasn’t thinking the CPx would go like a bullet, especially with just 4kW of power, I was expecting more power than I actually got.

Performance can be adjusted by selecting one of three power modes, which affect the top speed you can reach, but these impact the range, too.

Mode 1 is ‘eco mode’ and restricts top speed to 45km/h, which limits CPx application to only the most congested city traffic. Mode 2 allows a top speed of 65km/h, so is suitable for the suburbs, while Mode 3 allows up to 90km/h, although I never saw this speed on my test; topping out at around 80km/h.

As mentioned, the acceleration is far from quick and buzzing around inner-city Sydney, I needed to be in Mode 3 all the time and have the throttle pinned to avoid being a mobile chicane. On several occasions, even this mode was inadequate. With a pillion, it’d be even worse. 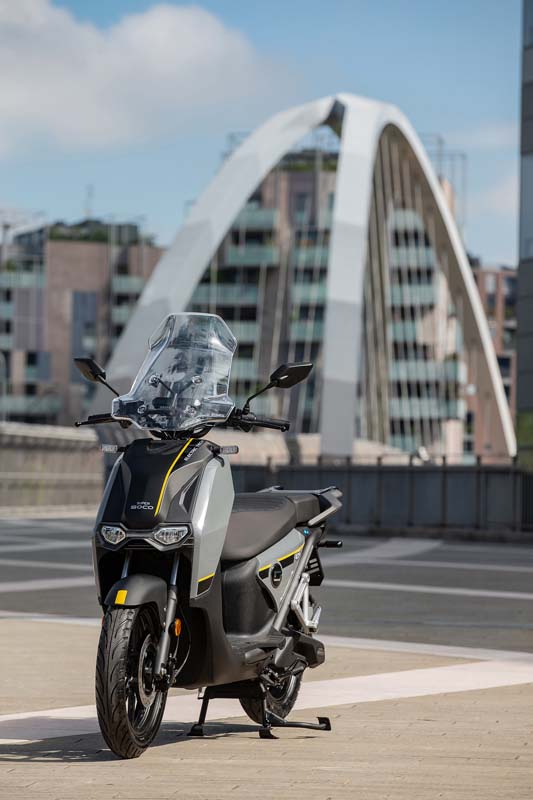 When moving away from traffic lights, the CPx’s take-off speed proved incapable of dusting cars, so I had to adapt and sit one car back at intersections, rather than filter to the head of the queue.

Another factor with Mode 3 is that it burns through the battery quicker, which will substantially reduce the claimed 70-75km range.

While acceleration is slow, it is smooth, which is some compensation. 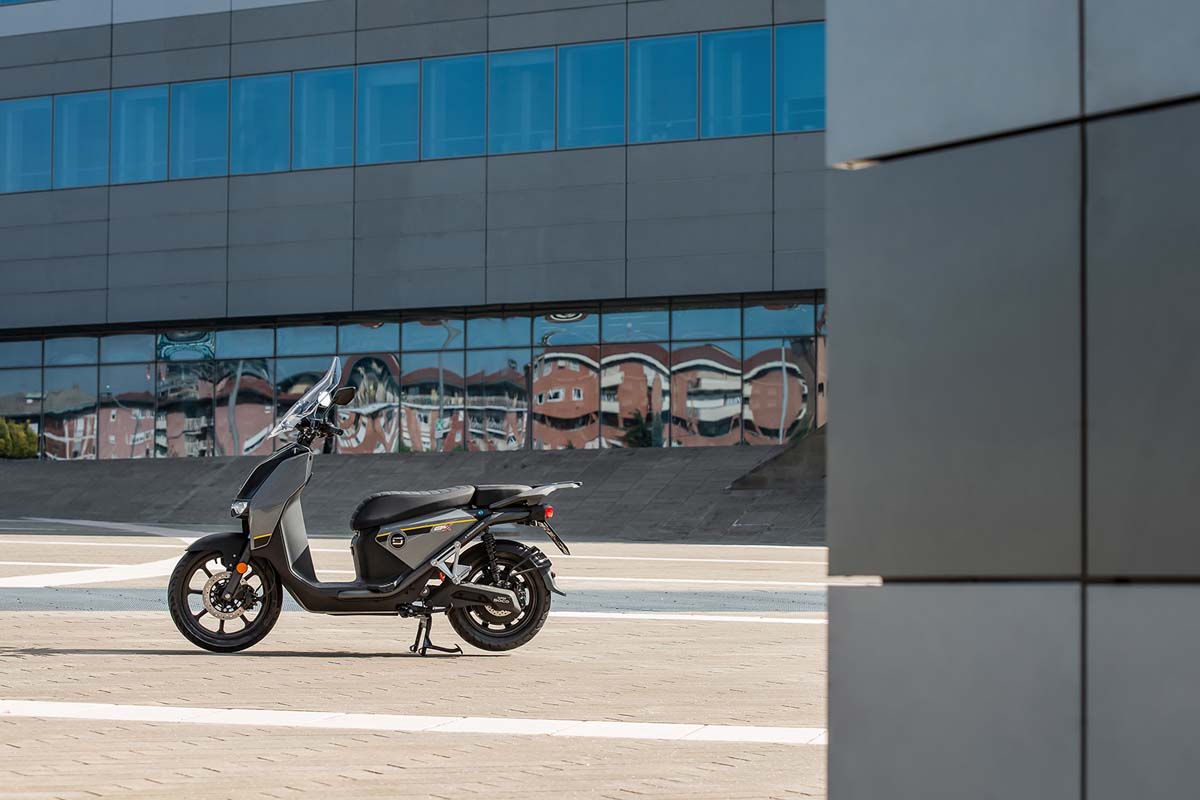 I love scooters. I own one and use it regularly, so I feel well qualified to comment on the CPx’s good and bad points.

If you have a short daily commute like me (7kms), then the CPx could be ideal. It’s LAMS approved, so is suitable for beginners, who will perhaps appreciate the light weight and meagre power more than I did.

It’s comfortable to ride, and of course, there are those EV green credentials, which may be all that’s needed to swing potential buyers. Those buyers will need deep pockets, though, as the ride away price for the CPx is $7,690, but that will be offset by cheap running costs over the course of ownership.

For all those plusses with the CPx, the minuses are its inadequate power – for me at least – and the lack of underseat storage.

You can work around the lack of storage space (adding a top box, for example), but that lack of power is frustrating, and for me it was a hill too tall to climb. Speaking of which, you won’t be able to climb gradients in excess of 17 degrees on the CPx, so if you live in the hills, you’ll need to look elsewhere for your commuting needs.

While the CPx didn’t have the EV ‘wow factor’ I was hoping for, it does have its positives and proved a capable ride for the city. I just wish it had more power and could deliver it more quickly. 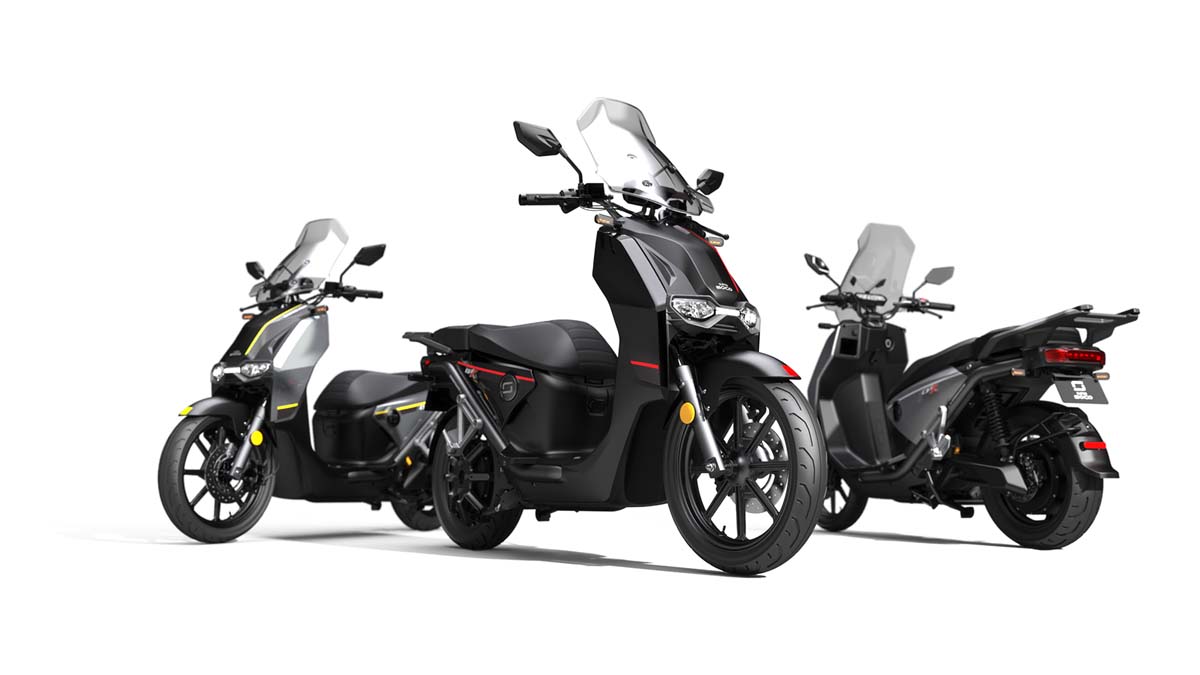