Hi, my name is Mighty Mo.

So, when I was asked to test ride a Royal Enfield Meteor 350, I was ready to be disappointed. But I wasn’t. 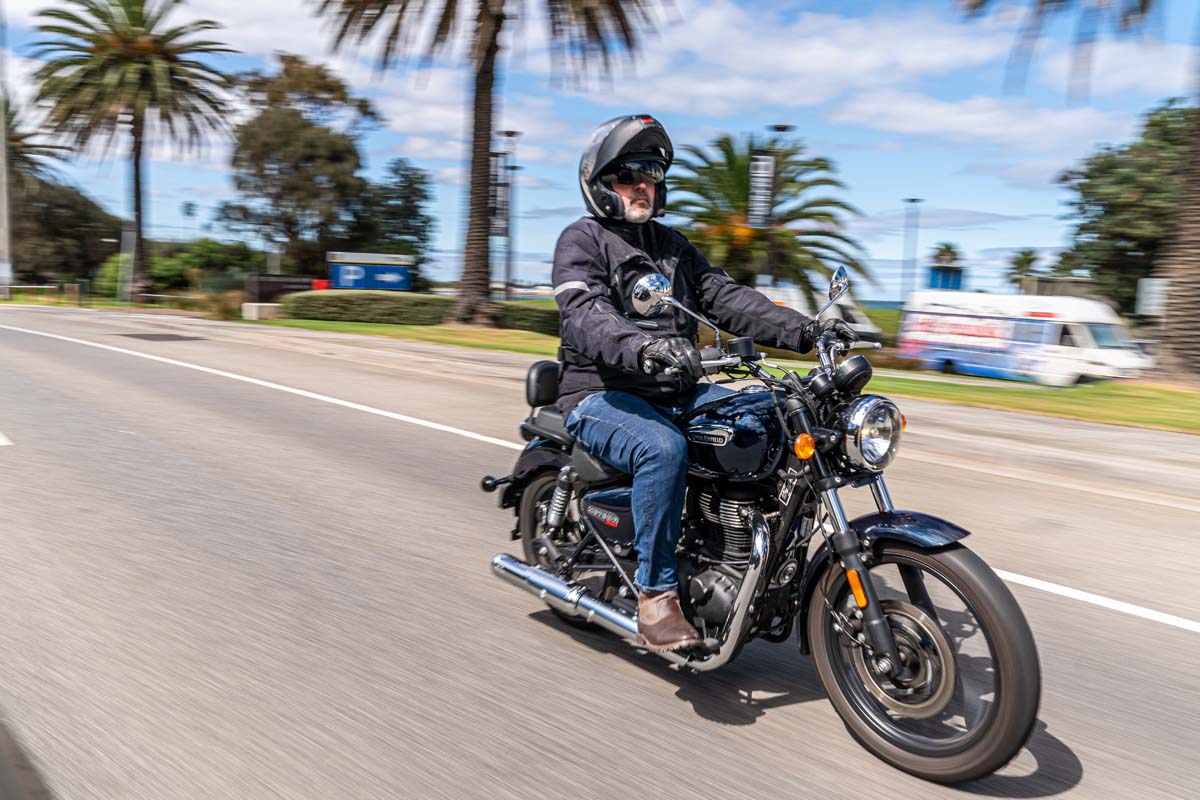 My prejudice against Royal Enfield goes back a bit, based largely on the Bullet 500 I rode on a 9-day Extreme Adventure through the Indian part of the Himalayas. At between 12,000 to 18,000 feet elevation on the trek, the Bullet had less power than a clapped-out postie. Not the bike’s fault, I know, as any N/A motorcycle would struggle to breathe at that altitude, but it still gave me a negative perception of the brand.

So, in my mind, if a 500 single couldn’t cut it, what chance did a smaller 350 have at sea level? I was going to find out as I had wangled my way onto the Australian press launch for the Meteor and would be riding alongside some established and experienced journos.

Having missed much of the pre-launch PR and news on the Meteor 350 when it was announced back in January, I was coming to the launch with open – if jaded – eyes.

I later discovered that the Meteor 350 revives a model name from Royal Enfield’s English past and replaces the Rumbler 350 as the small-capacity cruiser in Royal Enfield’s Indian owned and built present.

I also discovered that the Meteor 350 isn’t just the Rumbler in a new set of clothes. The frame is all-new, as is the engine: a 349cc air-oil cooled SOHC single producing 15kW at 6100rpm and 27Nm at 4000rpm, with throttle response optimised for dependable starting and linear acceleration.

A balancer shaft on the engine reduces vibration at speed compared to older Royal Enfield singles, without compromising the distinctive note or the sort of torque expected out of a cruiser -that’s according to Royal Enfield and those more familiar with the brand and its recent history than me. 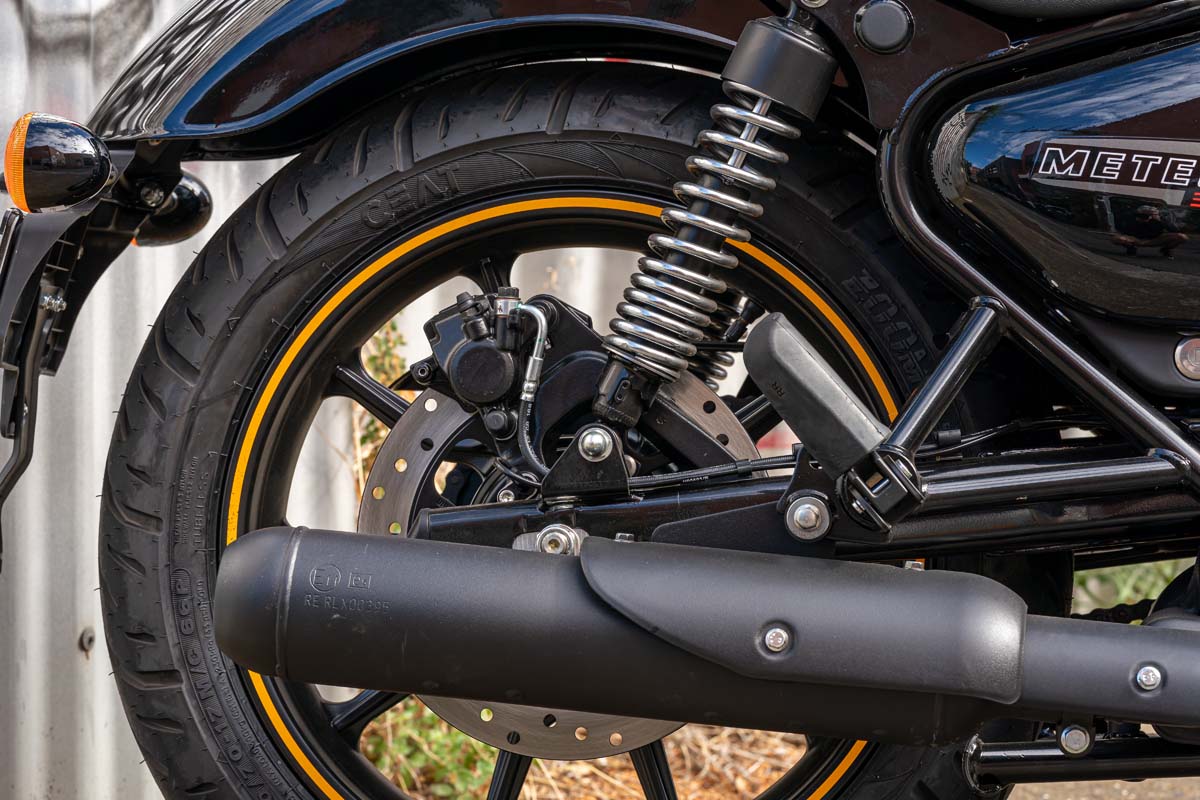 As a sidenote, I must say that the Meteor 350 didn’t fit my preconceptions of a cruiser. I was expecting something that sat lower, had a longer rake and fatter rear end. No, the Meteor 350 isn’t a cruiser in the Harley mould, but it does have a top speed in the 115km/h range and the ability to sit on 100km/h without stress, so long stretches on the highway shouldn’t be an issue. 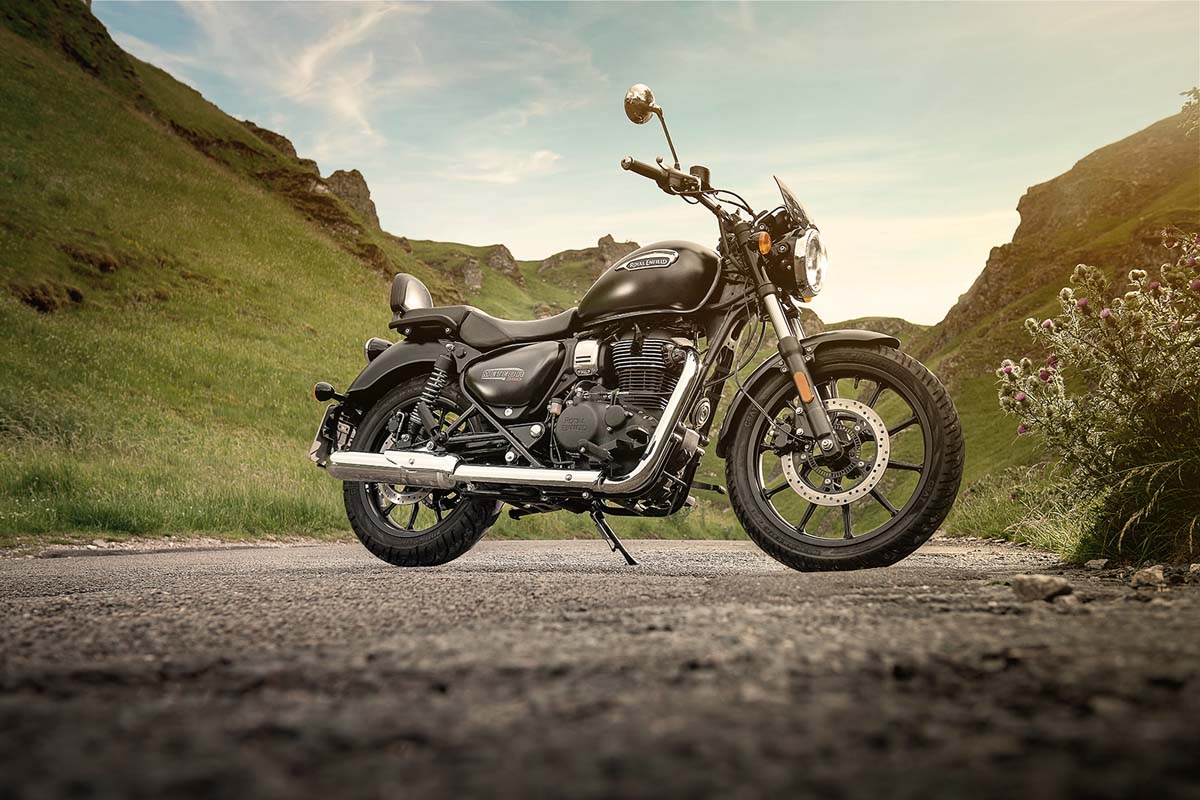 Speaking of highways, the engine is matched to a five-speed gearbox with overdrive fifth gear to deliver what Royal Enfield says is stress-free and economical highway cruising.

The Meteor 350 frame is all-new, but in a familiar twin-downtube cradle configuration.

Designed to offer the sort of flex needed for manoeuvrability, while remaining rock-solid for highway cruising, the frame also accommodates a low centre of gravity and the Meteor 350’s 765mm seat height. 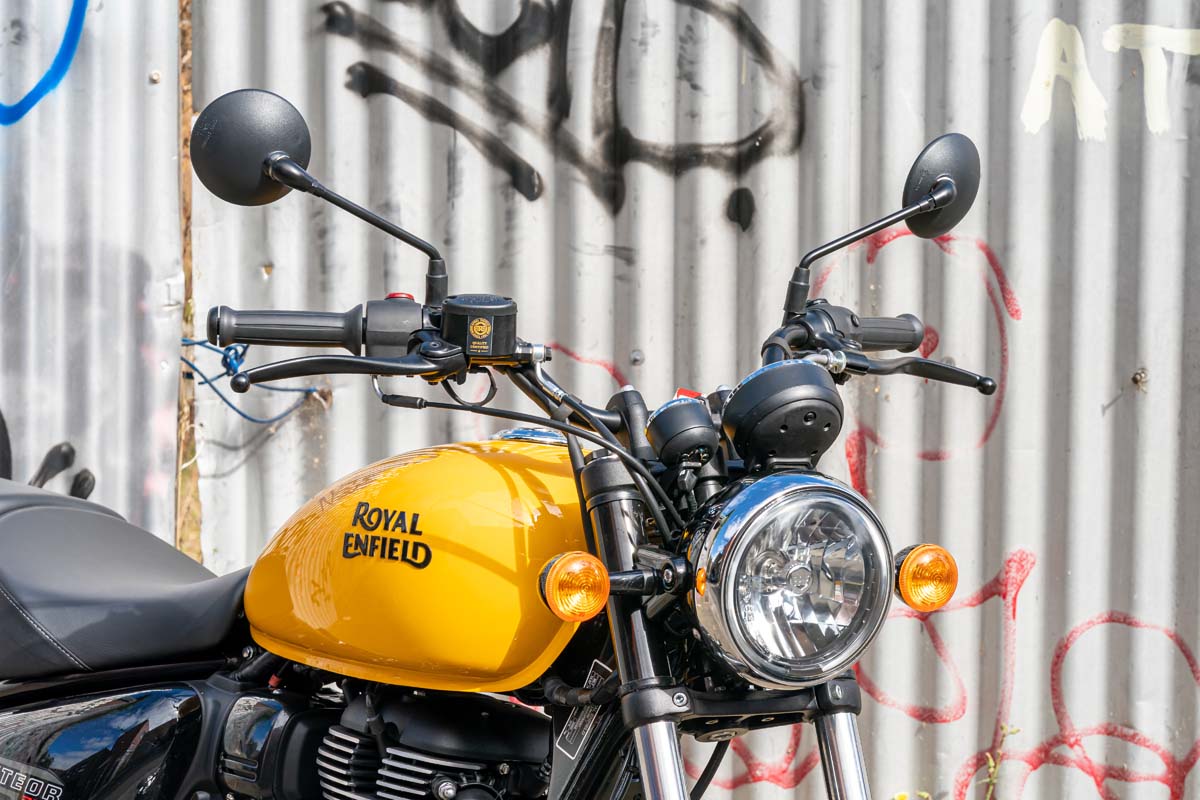 Beyond the new engine and frame, there are lots of other modern touches, like good looking alloy wheels, disc brakes with ABS and Bluetooth interconnected GPS.

Royal Enfield had previously built models for the domestic market, with any sales outside India considered a bonus. More recently, the company has been looking globally, and the Meteor 350 has been the fullest expression of that global focus to date. The Meteor 350 also arrives in Royal Enfield’s 120th Anniversary year, which the company will be spruiking throughout 2021.

Having finally clapped my eyes on the Meteor, I must say it looked great.

Parked out the front of St. Kilda’s Luna Park, the lineup of Meteors had some competition in the eye-appeal stakes, but with lots of cool colour schemes, changes in engine finish, badging and additional features across the three Meteor model grades – Fireball, Stellar and Supernova – the Royal Enfields held their own.

Colours and details are used to define each grade, and as we had a selection of all three for the launch, we could compare the finish of each as they were lined up side-by-side for our ride. 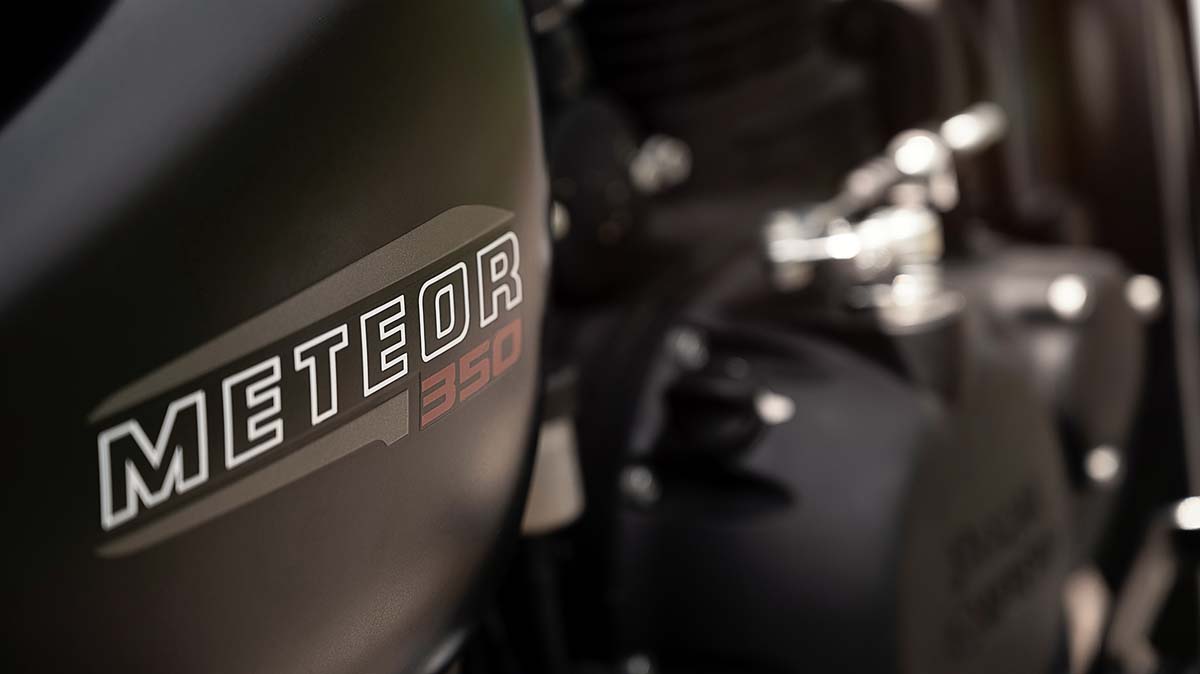 Taking a closer look, there are familiar Royal Enfield retro styling cues (I can even see some of that asthmatic Bullet 500 in the Meteor!) but overall, there’s a much more modern look, as evidenced in elements like a blacked out engine and exhaust on some grades and the machined finish on the wheels of the Supernova.

The instrumentation may not look it, but it’s pretty new millennium, too. More on that later. 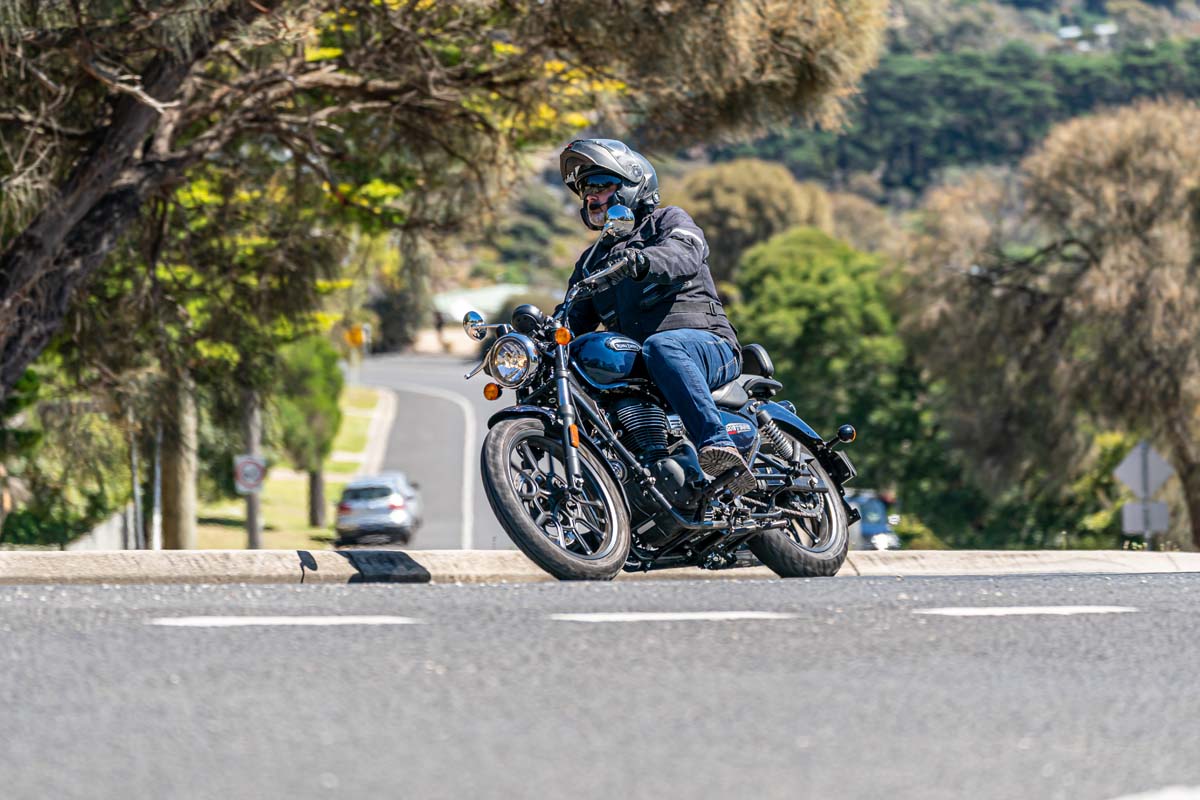 Even before I parked by substantial frame on the Meteor, it looked to me to be a bigger bike than it actually is. If there was no ‘350’ on the sidecovers, I would have guessed it was a 500 or maybe even a 600, while the 15-litre fuel tank had the look and feel of a Triumph Thruxton.

That impression continued when I sat on the low (765mm) seat, which is nice and wide. With similarly wide handlebars and grips that are nice and big (at least for me), I was starting to get the Meteor’s cruiser vibe.

Plant yourself in the saddle and the ergonomics are nice. The pegs are mid-forward mounted and there’s a cruiser-style heel-and-toe shifter, but the riding position remains close to upright for more effective bike control.

The mirrors are large enough to be useful, too; something many modern motorcycles overlook for the sake of style.

The main instrument gauge, comprising an analogue speedo and digital everything else, is simple and easy to read, but a tachometer would have been a nice addition. 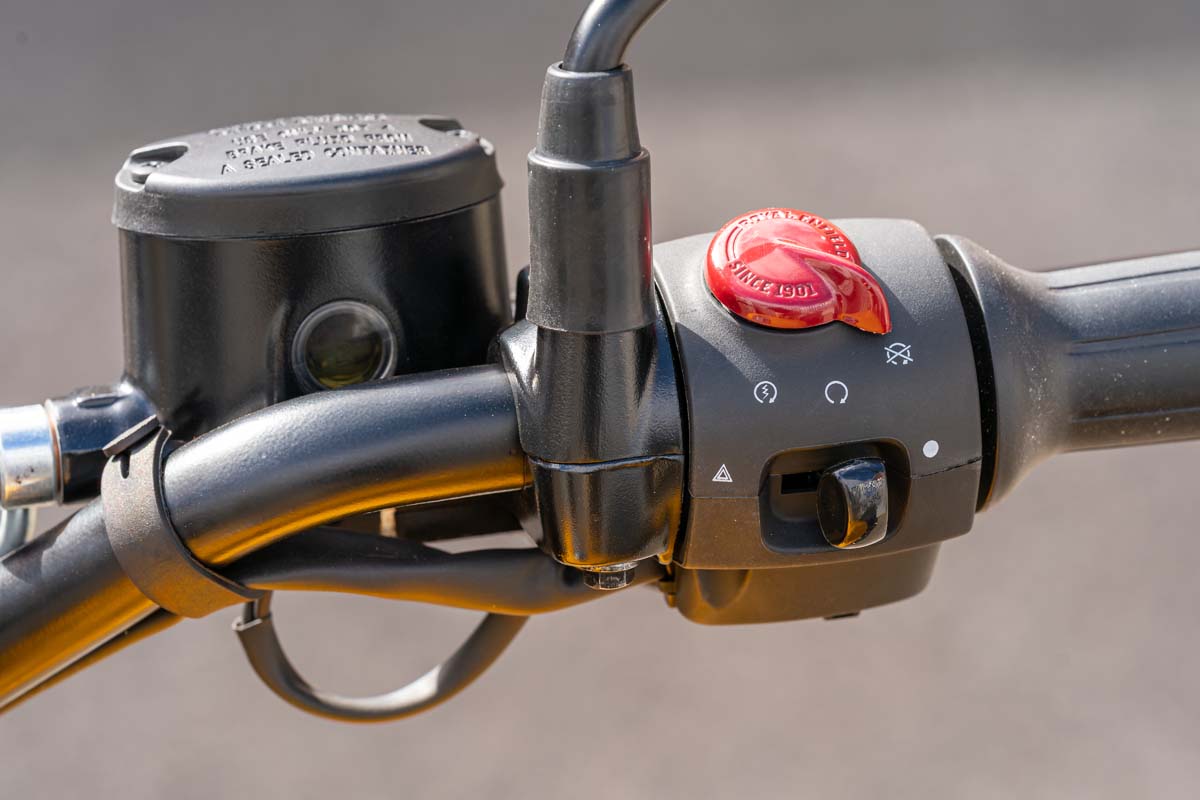 The small pod alongside is for the ‘Tripper’ navigation system, which eschews the complexity of some modern satnav systems for a simpler set-up that uses turn-by-turn instructions. Powered by Google Maps and paired, via a Royal Enfield App, to your smartphone, Tripper presents instructions in simple graphic form. An upcoming turn, for example, is indicated as an arrow that “fills” with colour as it draws nearer, then flashes when the turn is imminent. 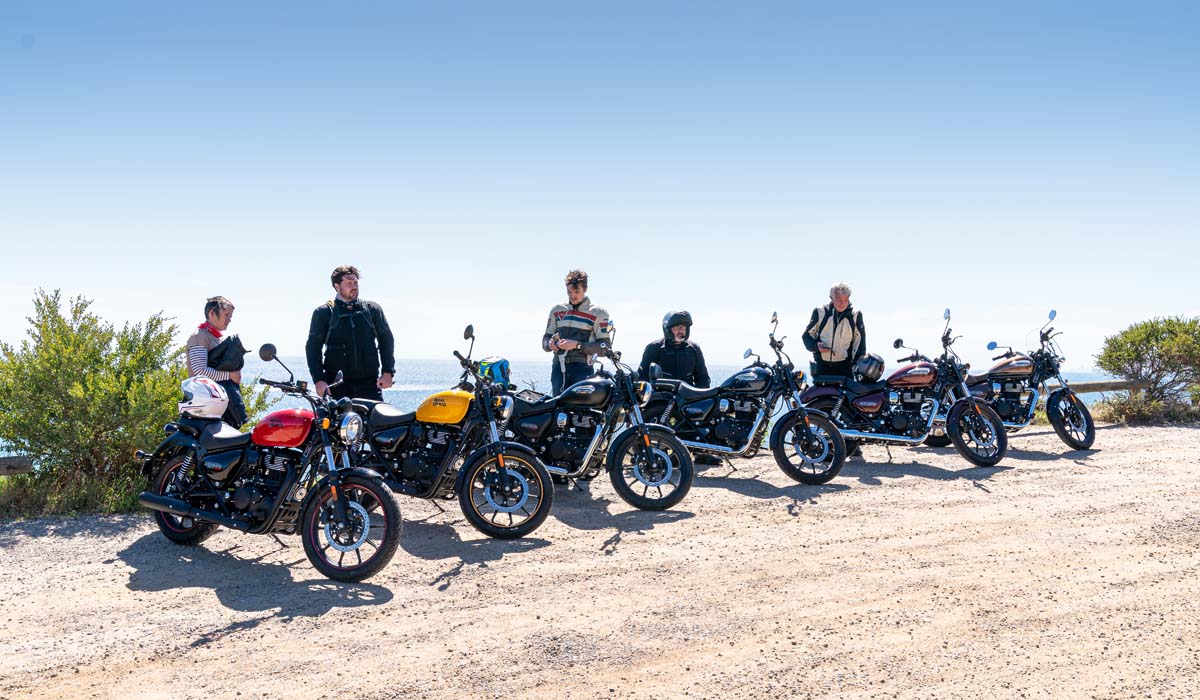 If you don’t need route instructions on the ride, the Tripper pod serves as a clock – clever!

The switchgear places everything where you’d expect it to be – engine start/stop on the right and lights, horn and indicators on the left. Being a simply appointed motorcycle, there’s no fiddly buttons to explore menus, select riding modes, or switch on various rider assistance functions. This all gets back to Royal Enfield’s credo of “pure motorcycling”, that puts the rider in charge and places minimal distractions and electronic barriers between them, their machine and the road. 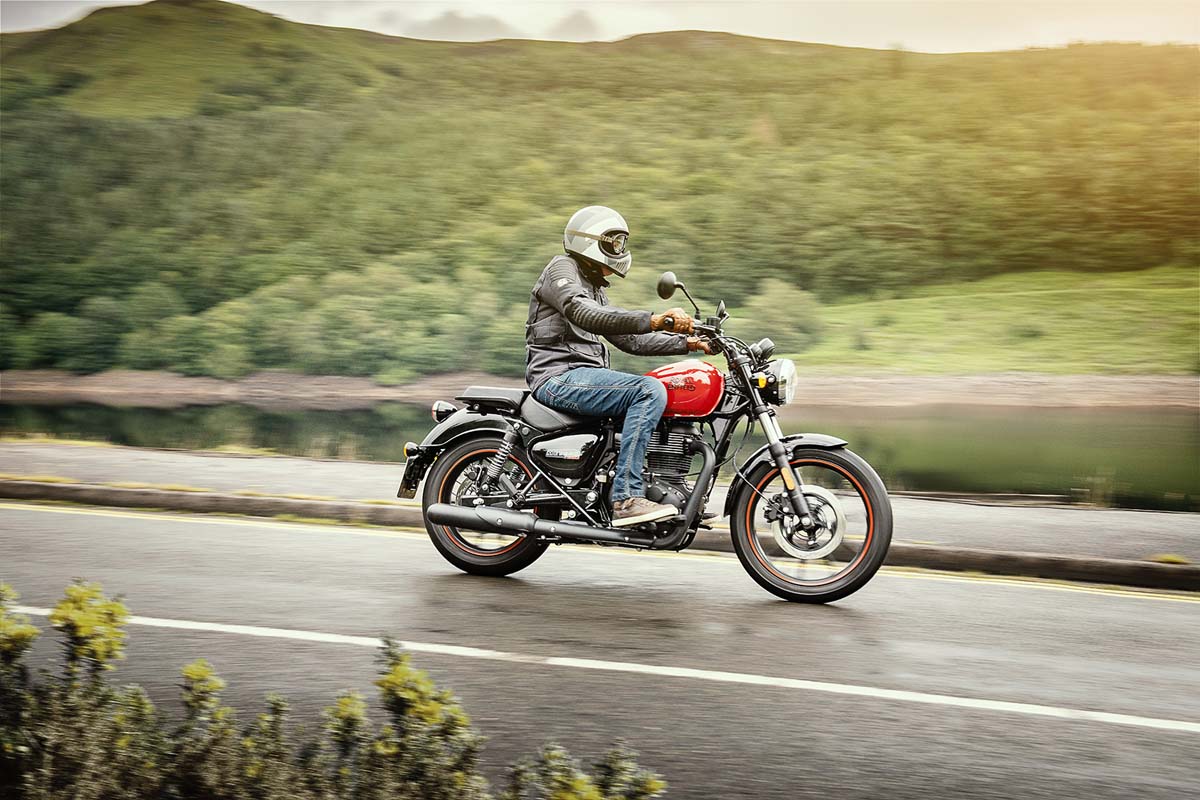 Overall, for the type of bike that it is, the Meteor doesn’t seem to be lacking anything and there’s a very “Japanese” feel to the level of quality and finish.

From standstill, the Meteor took off nice and smoothly, the engine revving freely with a nice amount of torque. Gear changes were smooth and the hydraulic clutch felt nice and light. 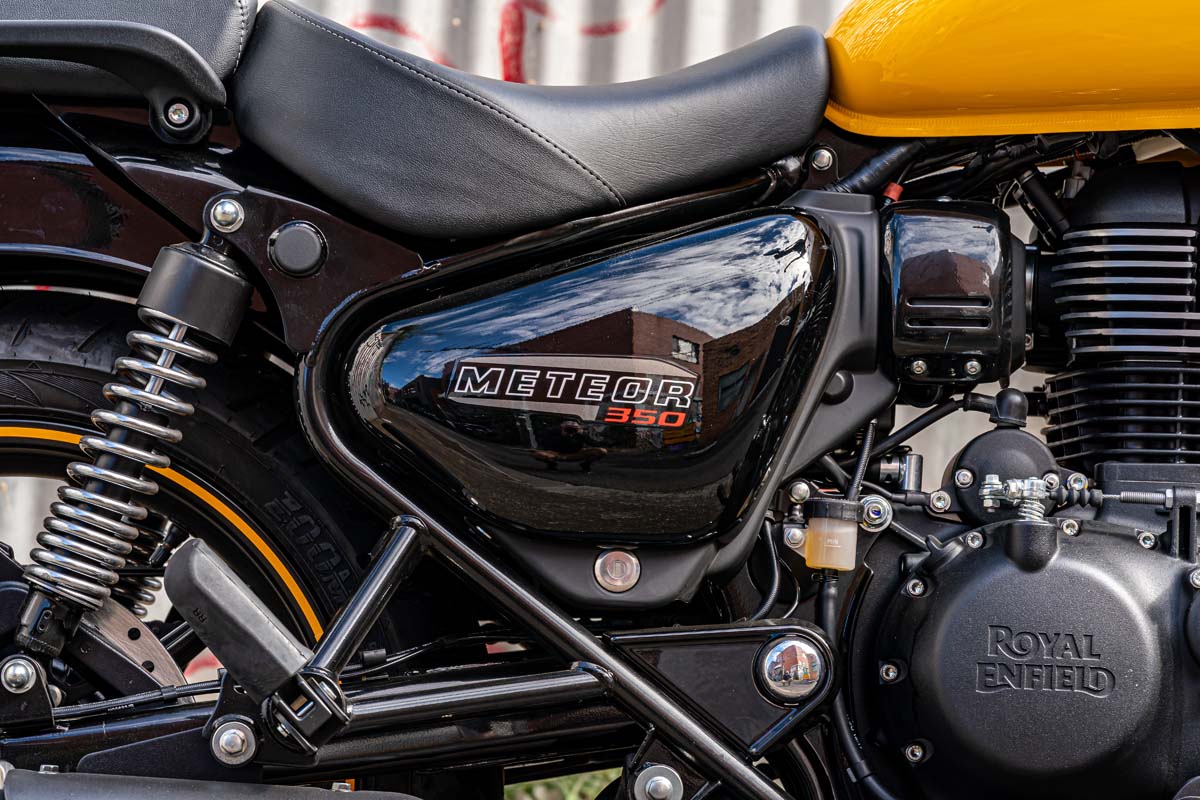 I was surprised at how peppy it was taking off, as I thought with my weight it wouldn’t take off at all! It zipped through the traffic with ease, all the while feeling well balanced. As tall as I am, I didn’t feel cramped, either, so I would expect riders of similar stature to be untroubled. On the launch, there were all shapes and sizes of riders, from small and lithe to . . . me. No-one complained about the ergos, so Royal Enfield seem to have hit the sweet spot with a bike that can accommodate riders of just about any size. 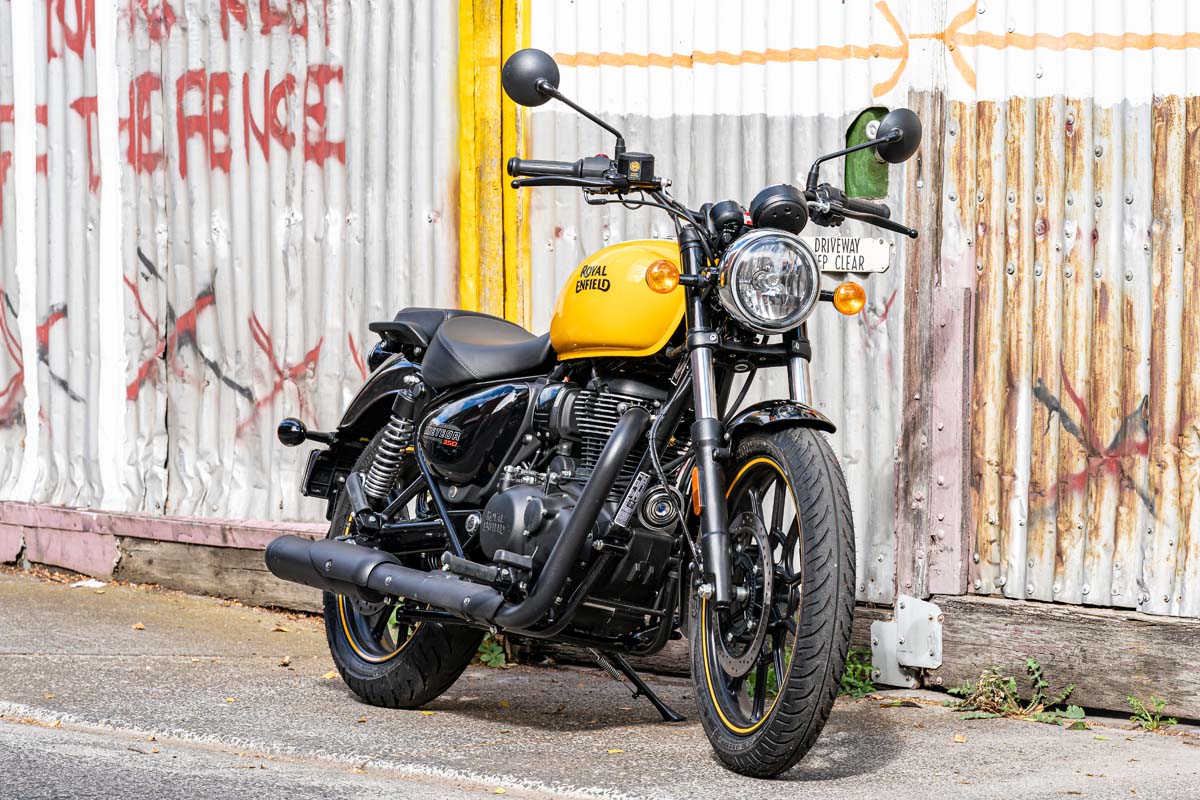 From Luna Park, we rode through busy inner suburban Melbourne traffic, down to Mornington, then back to the city on the freeway – covering about 200kms in total.

The stop-start suburban stretch provided plenty of opportunities to test out the brakes, which consist of a 300m front disc and 270mm rear, ByBre (budget Brembo) calipers and standard dual-channel ABS. The brakes felt good and the ABS will save beginners locking it up in the wet and throwing the bike and themselves down the road.

The return leg on the highway proved that Royal Enfield were true to their word in the pre-launch PR – the Meteor does sit comfortably on 100km/h, but go much faster and you will be wringing its neck.

There was no noticeable difference in ride quality across the three grades, but the windshield on the Supernova would make highway stretches more comfortable. 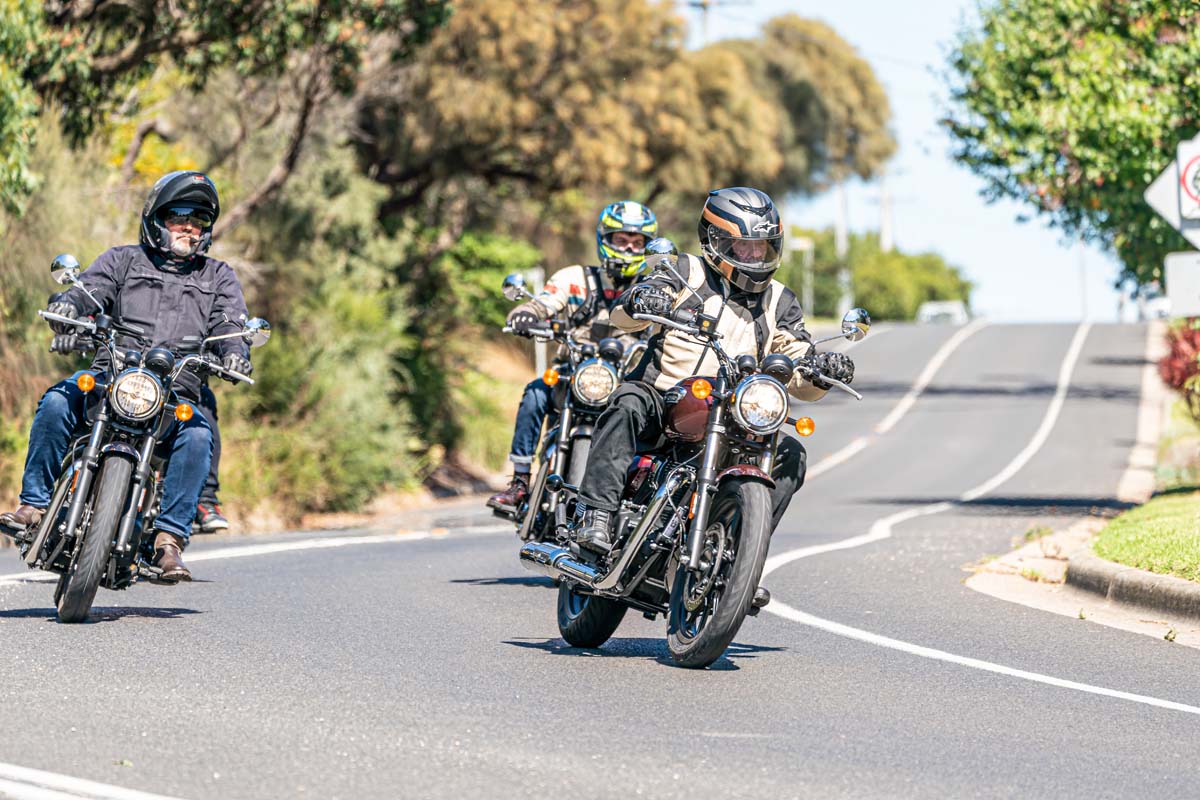 I didn’t feel sore or tired at any point on the ride (granted, it wasn’t a long one), and I must admit I did get comfortable in that big armchair of a saddle. Jumping back on my KTM 1290 afterwards felt a bit weird because the pegs are much further back and the fuel tank is enormous and blocks a lot of ground visibility.

Once word gets out about the Meteor, I expect Royal Enfield will sell hundreds of thousands of them. It’s modern enough to appeal to European and Australian (and maybe even American) expectations, yet remains simple and sturdy enough to stand up to regular use in rough conditions everywhere else.

As a good all-rounder, tough enough to handle the Wild West conditions that are the Indian road network, I’m sure it will become the bike of choice in its homeland.

For us in the land of Oz, it is a perfect entry level bike. And like the rest of the Royal Enfield range, the Meteor 350 is LAMS legal. 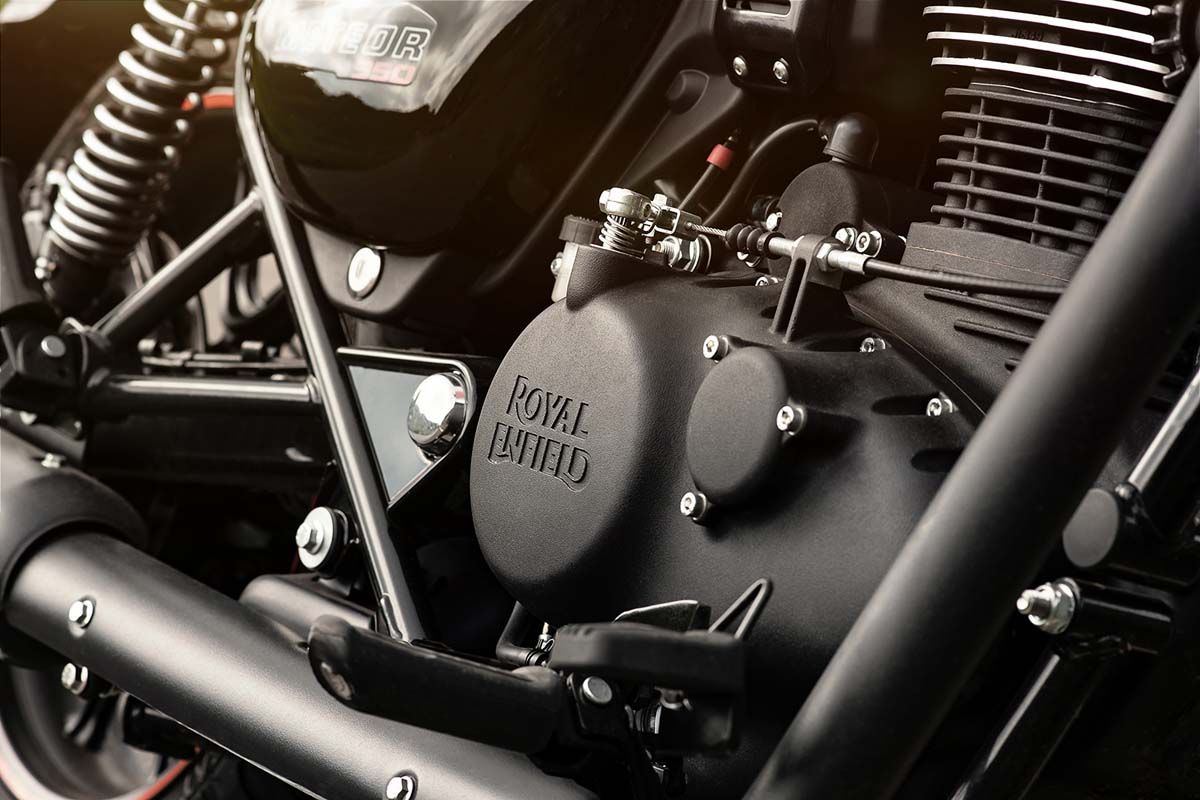 After my experience of the Meteor, I’d be happy for my boys to ride one. With its ABS and a sensible upright riding position, it’s a safe ride and a good format to learn on. Better than a scooter, because it has big wheels, the Meteor could easily do an extended ride beyond the urban fringe into the countryside or even in the mountains as riding confidence builds. Its simplicity, comfort, smooth power delivery and predictable handling make it a great commuter, too. 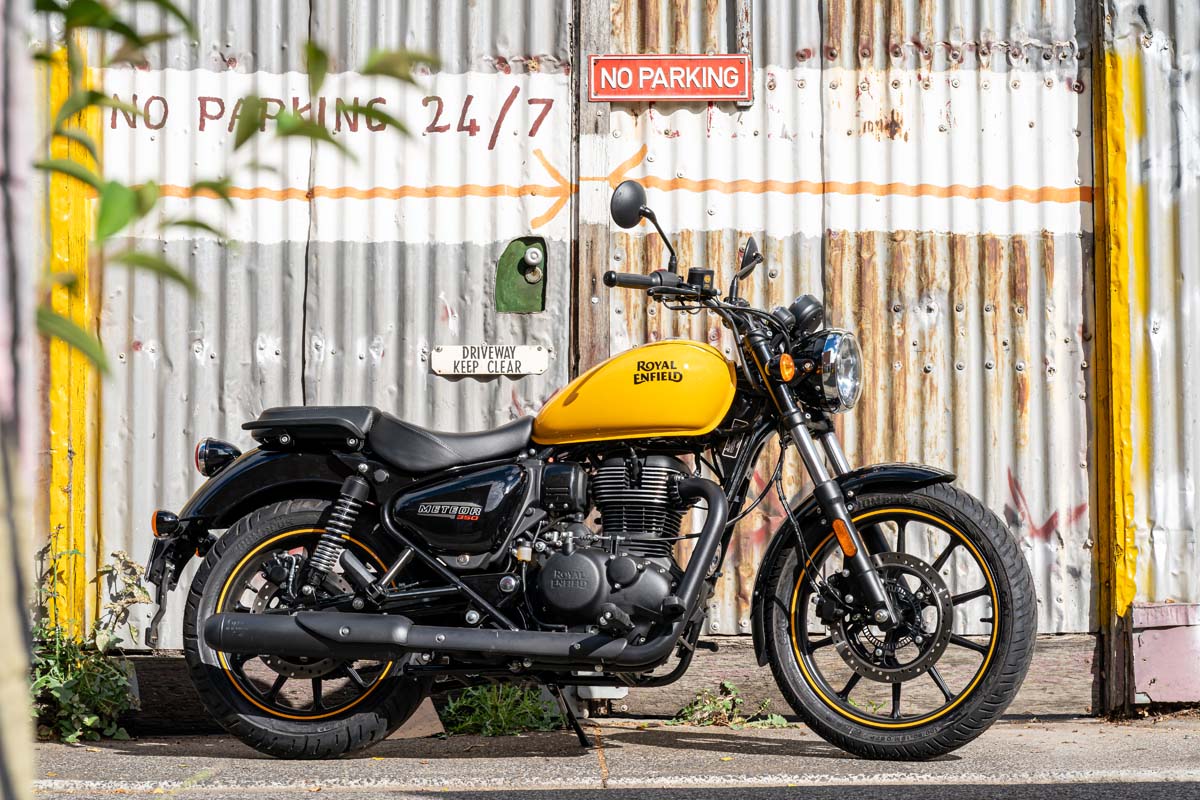 Appearance is always subjective, but to me the Meteor 350 looks cool and each of the three model grades have their merits aesthetically.

Finally, the integrated GPS will make navigating to the newest, coolest café a breeze. 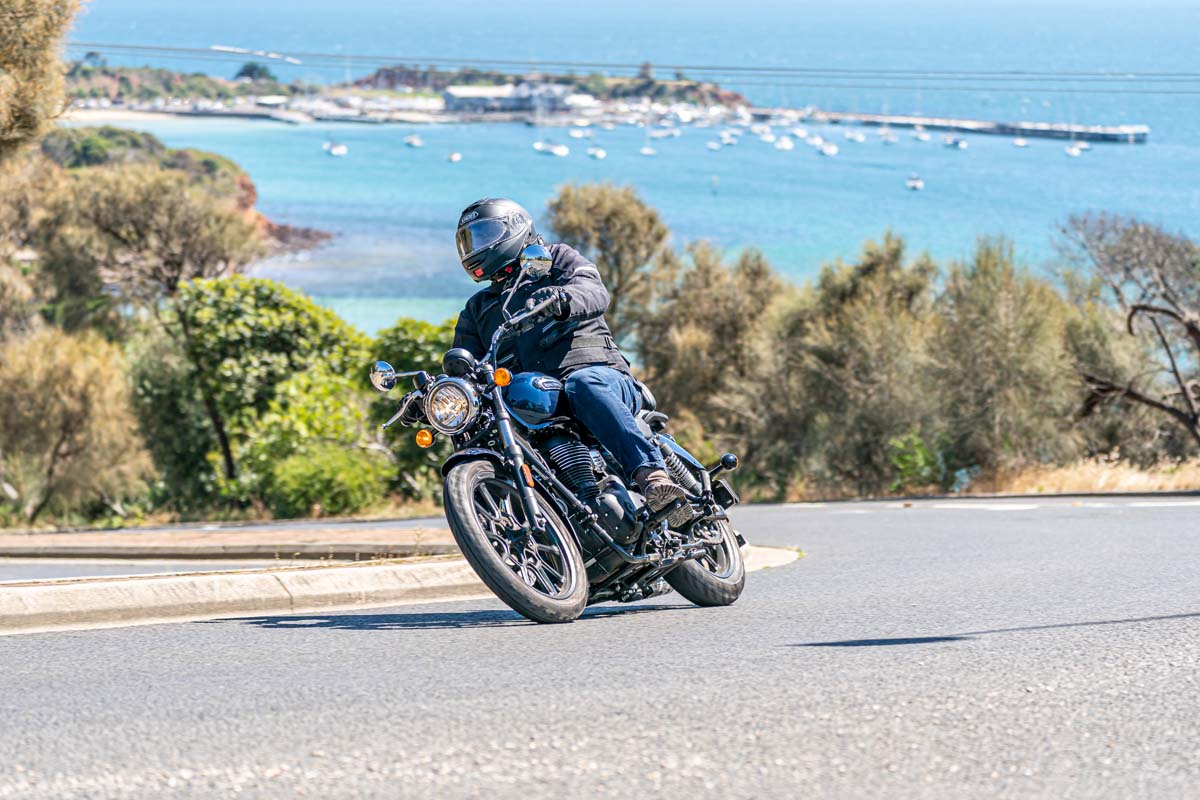 In summary, I was pleasantly surprised by the Meteor 350 and thought for the starting price of $7,690 ride away (topping out at $8,390 ride away), it makes a great package for your city rider or beginner.

The Meteor has the finish and feel of a quality Japanese motorcycle and looks good enough to pull up to any café and turn heads while you’re sipping on your latte. Or should that be chai?