An old name in motorcycling has been given a new life – and it’s available in Australia.

Scramblers are one of the archetypes of the motorcycle: simply built machines with relatively low weight, reinforced suspension elements and off-road tyres for rough terrain.

In the Wild West, such machines soon rivalled the horse, and in the Second World War they fought their way through the mud to the front.

They became really famous when Steve McQueen jumped one over barbed wire in the film "The Great Escape" and scramblers were stars in Bruce Brown's documentary "On Any Sunday" from 1971.

Today, Scramblers embody a romantic form of motorcycling where top speed is less important than having fun, tapping into those childhood memories and the pioneering days of America.

In "On any Sunday," Brown shows, with an almost tender eye, how riders maintain their equipment and their machines. A racing pro expertly checks his machine's gears, and it looks like he's patting them. When he mounts a visor on his helmet, the hand movements are both functional and affectionate. At the desert race, all the participants stand side by side, an endless band of motorcyclists facing the infinity of the desert. The start, when they plunge into the sand, is reminiscent of the legendary Land Rush during the conquest of the Wild West.

At the end of the film, there is a beautiful playful harmony in riders cruise along the beach for fun and frolic on their machines. A romantic man's dream has come true, a state of childlike innocence restored.

Fantic, with its "Caballero" product line, presents the motorcycle as a friend and a universal fun object, offering a ride that’s not a matter of lap times and top speeds.

The new Caballeros were presented for the first time in 2017 at EICMA in Milan. Designed as a modular system, the three displacement variants – 125cc, 250cc, 500cc - share most of the same chassis components and a neo-classical scrambler look. The 125cc variant uses the Minarelli engine from Italian production while the 250cc and 450cc machines are equipped with engines from Zongshen in China, which have been used in the bikes of various international manufacturers for around 20 years.

The bikes are assembled at the company's headquarters near Treviso in Italy, and from 2017 to date, around 11,000 Caballeros have been sold, of which around 30 per cent have been the 125s, 64 per cent 500s, and 6 per cent 250s (which will no longer be available in European markets as a Euro 5 variant).

As a motorcycle brand, Fantic has existed since 1968 and was founded in Barzago, near Milan. With robust technology and fresh design, the company surfed a wave of success in the ’70s and ’80s with off-road mopeds and won a series of international titles in off-road and trials before the Japanese competition became overwhelmingly strong in the mid-1980s.

After bankruptcy in 1995, industrialist Federico Fregnan, producer of coffee machines, reawakened the brand in 2003 and began production of 50cc enduro machines, but somewhat half-heartedly. 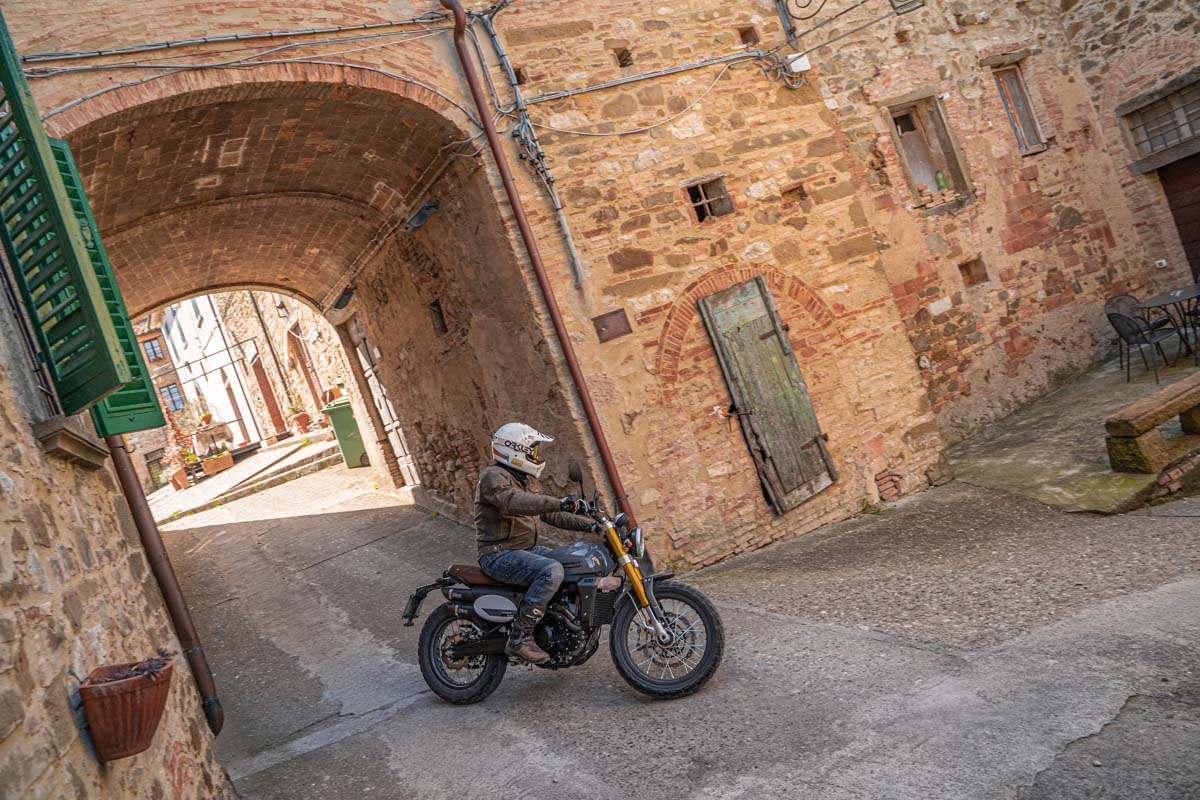 In 2014, Italian investment group VeNetWork, led by Roman, took over Fantic and launched a new product offensive, starting with electric mountain bikes and the distribution of French "Mash" scramblers, made entirely in China. However, the brand's own Caballero product family provided the breakthrough and success that Fantic enjoys in the modern era. 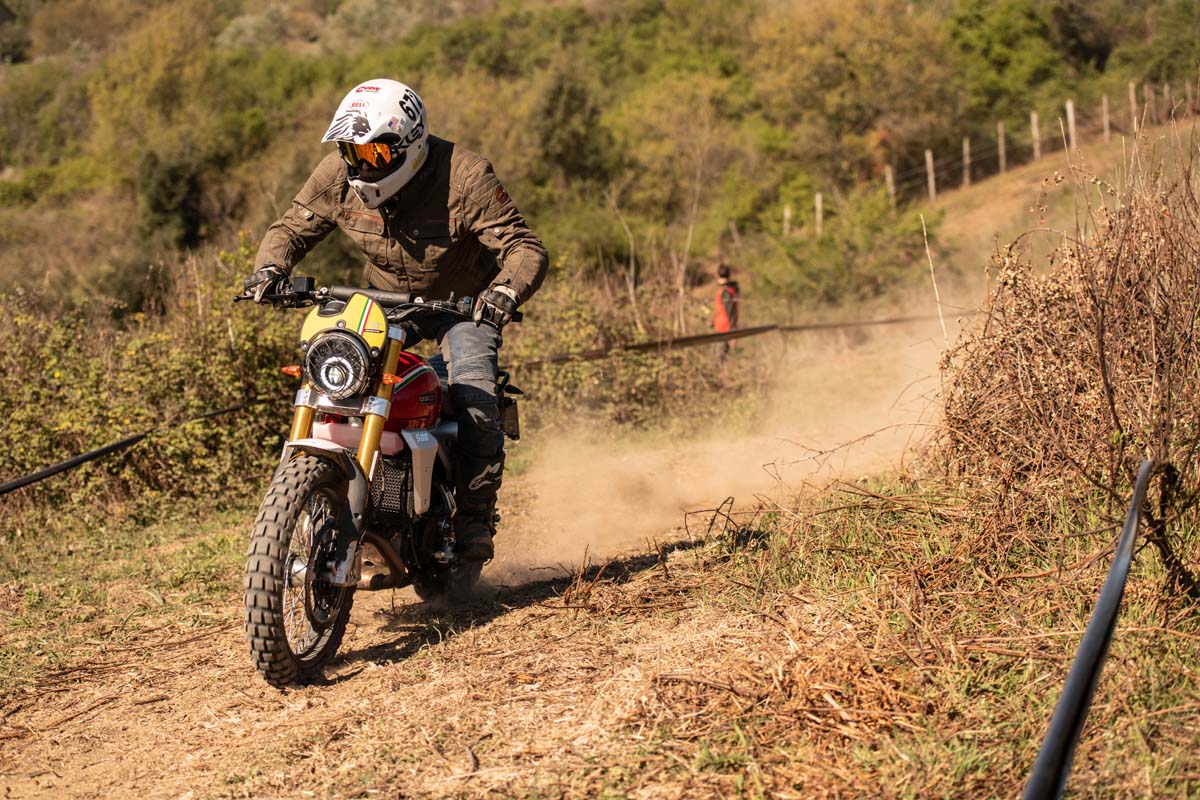 For 2021, the five different Caballero variants - Scrambler, Anniversary, Deluxe, Flat Track and Rally - are mainly distinguished by different colours and details. (NOTE: Not all variants are currently available in Australia).

The Flat Track has a 19-inch rear wheel (instead of 17-inch), while the Rally features adjustable suspension with 200mm of travel (instead of 150mm), an aluminium rear swingarm and a small tool bag on the tank.

As part of the Caballero 500 upgrade to meet Euro 5 homologation, a larger catalytic converter is now installed in the exhaust manifold and the EFI mapping has been adjusted for all variants. Furthermore, the side stand mount has been reinforced, a splash guard has been installed on the rear licence plate holder and new handlebar switches from Domino are used.

To improve comfort, the seat has been revised and new side number plates freshen up the look.

Fun on the Farm

To convey the spirit of original motorcycling, Fantic invited motorcycle media to an “Enduro farm” in northern Tuscany, where the new Euro 5 Caballero line was presented. 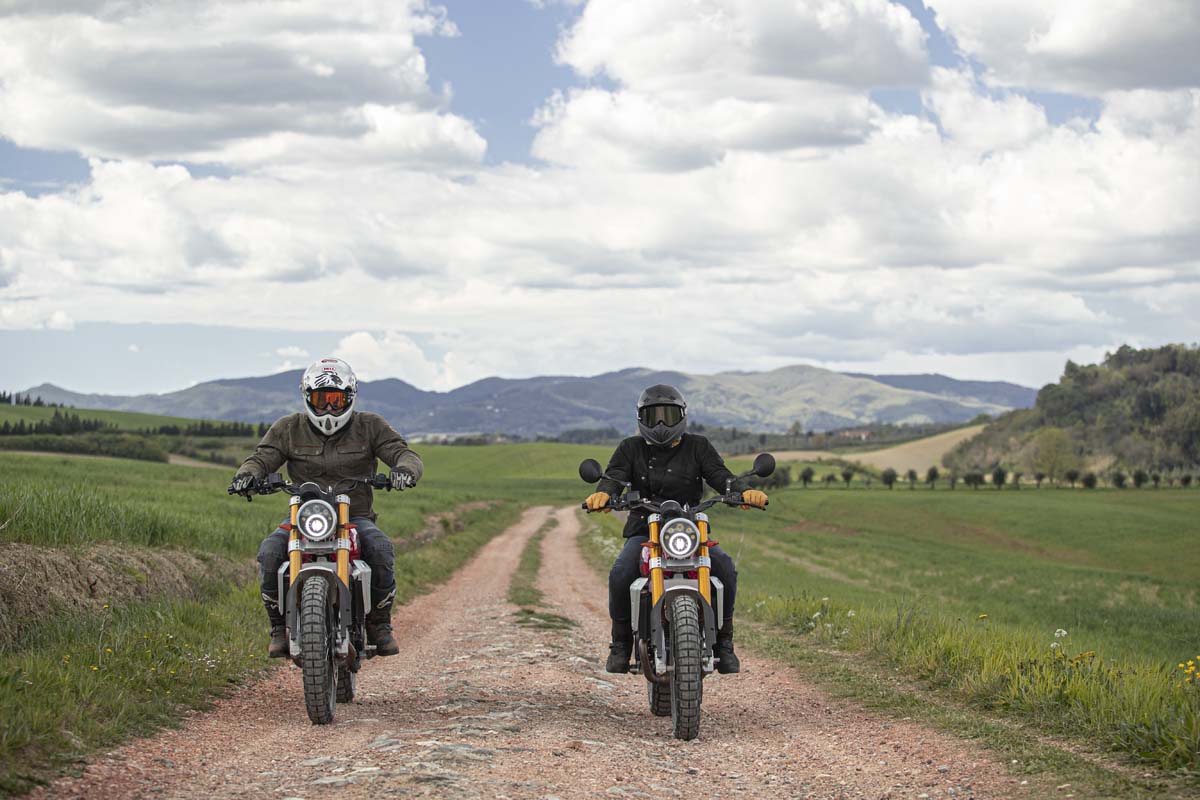 In teams of two, the invited journalists had to complete various tasks on the different machines, such as a timed Enduro special stage with the Scrambler, a navigation stage through the forest with the Rally, a photo challenge with the Deluxe and, finally, a race on an oval course with the Flat Track. The universal character of all the versions came to the fore during the various tests.

With the Caballero family, Fantic has managed to attract both the grey-haired Fantic enduro riders of the last century and the young kids of the new millennium to the brand. One reason for this is certainly the design of the machines.

Created by Riccardo Chiosi, the current generation Fantic Caballeros have a simple and somewhat martial look - the matte green tank colour of the Rally has echoes of a dispatch rider’s machine from WWII. In contrast to this, the poppy colours of the other models set a scene in front of a vintage ice cream parlour. Personality and motorcycle design detached from conventions always makes for interesting encounters on the road! 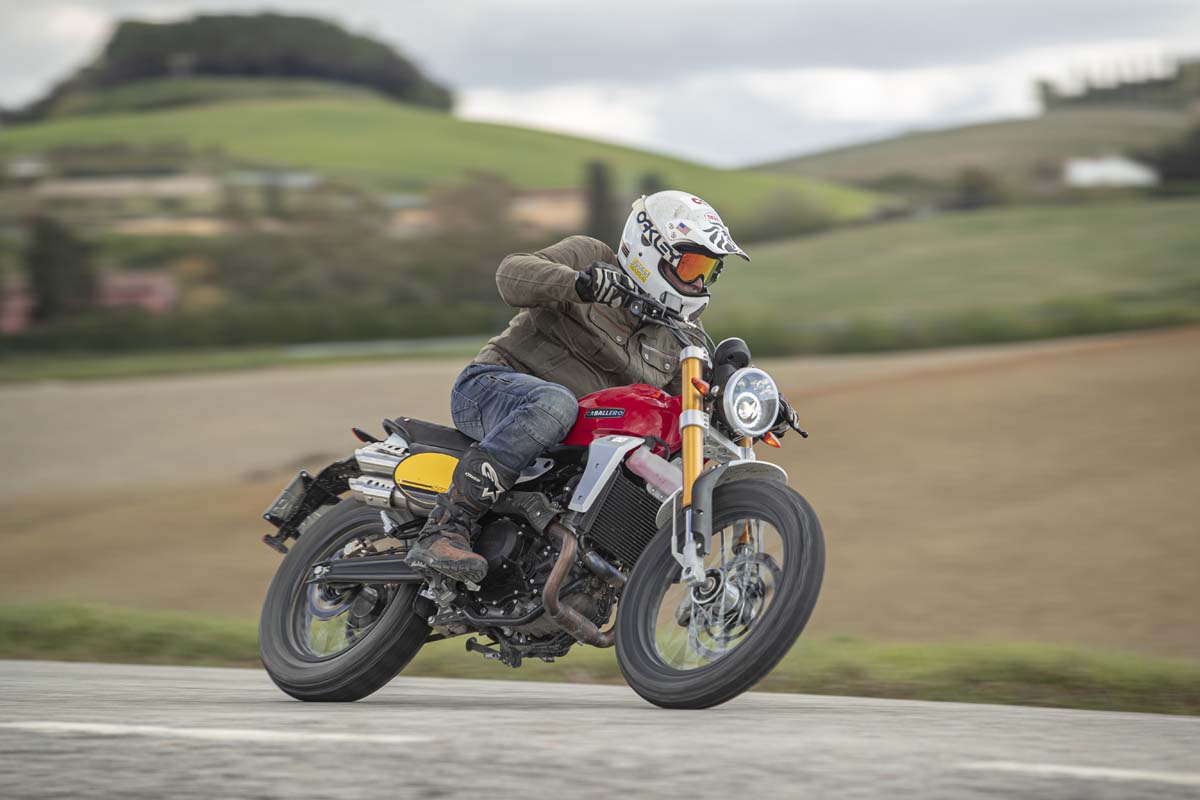 The Caballero's ergonomics fit well, but the Rally's seat comes in quite high at 860mm, compared to 820mm on the other variants. The new seat's harder foam compound improves long-distance comfort and transmitting the bike's feedback to the rider, so that's a plus. 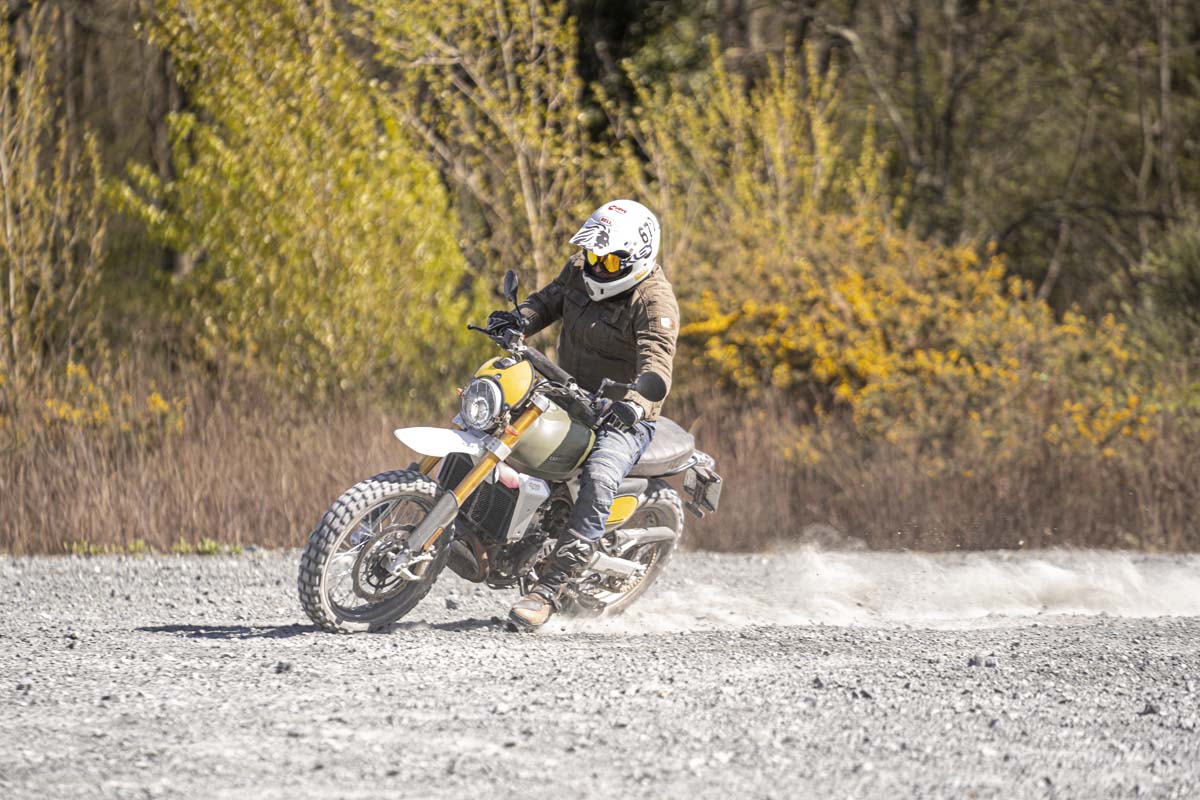 The magic of the Fantic is in the throttle, because it is not ride-by-wire but classic style with Bowden cable. This gives a very different and direct feeling for the machine, without the rubber band effect!

The clutch is smooth and shifting up and down through the six-speed gearbox can be done relatively well (with offroad boots), but the idle search with sneakers sometimes remains a bit tedious. 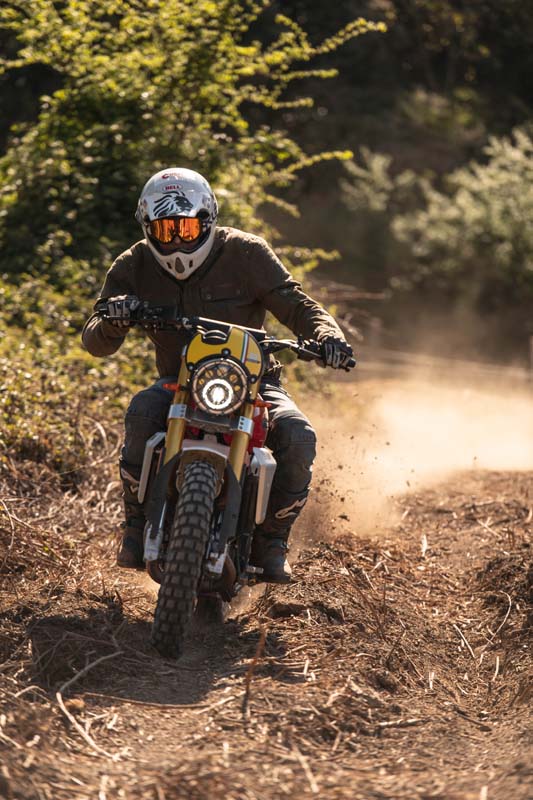 The new engine tuning for Euro 5 requires a longer warm-up phase at cold temperatures, which is important here in Europe, but not so much of a consideration in Australia. From operating temperature, the machine then pulls away from low speeds with virtually no vibrations. There’s also unexpectedly rich torque from takeoff and a great baritone sound from the standard Arrow-developed exhaust system. 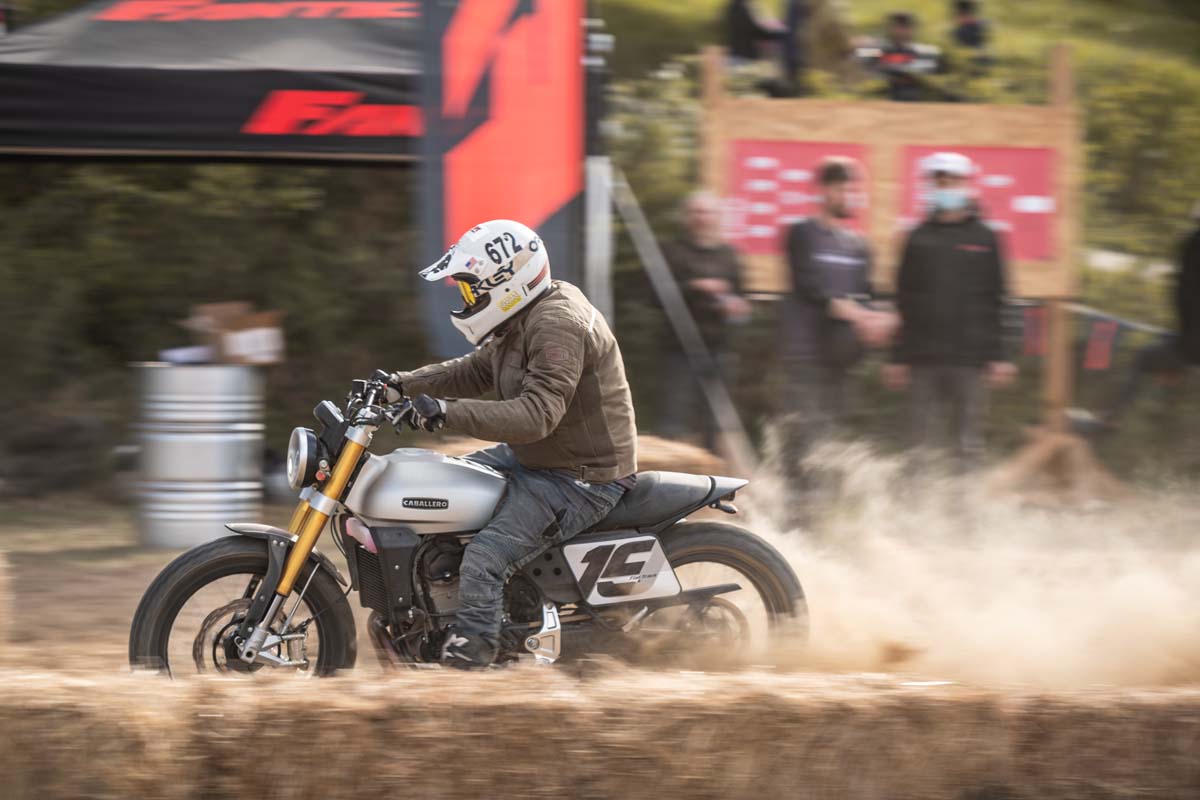 Present in every situation, the engine pushed the approximately 150kg (dry) machine with vigour out of the bends on narrow and winding country roads in northern Tuscany. Power delivery is progressive and even, with the torque already considerable from low engine speeds. The low engine braking torque once again reinforces the impression of a lively and torquey engine, the throttle response is impeccable and the power curve has no perceptible dents. There’s also a nice rumble and pop from the exhaust when the throttle is released.

The engine is bolted into a chromoly steel frame that favours lightness and helps the Caballero 500 achieve its impressive agility. 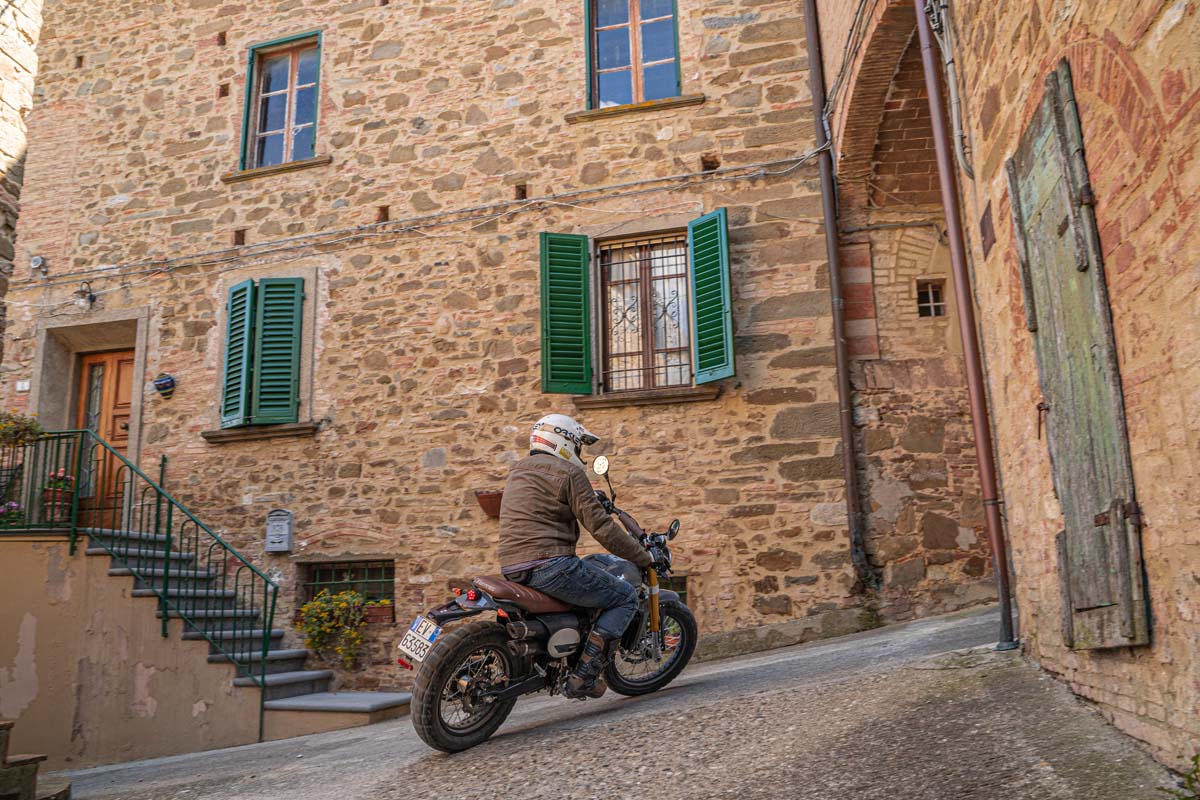 Suspension, made up of Fantic’s own ‘FRS’ 41mm USD forks and a rebound-adjustable monoshock rear, offers 150mm of travel at each end (the Rally swaps in 43mm front forks, with full adjustability and 200mm of travel at each end). In practice, this combination meant the Caballero rode above the patchwork of the road and stayed fairly track-neutral on a targeted route made up of tight turns as well as fast and long switchbacks.

The Caballero’s limit on the road are the Pirelli Scorpion Rally tyres. Due to the excellent handling of the light machine, you quickly move to the limit of the rubber. But for the experienced motorcyclist, this also means riding in best Supermoto-style is possible… 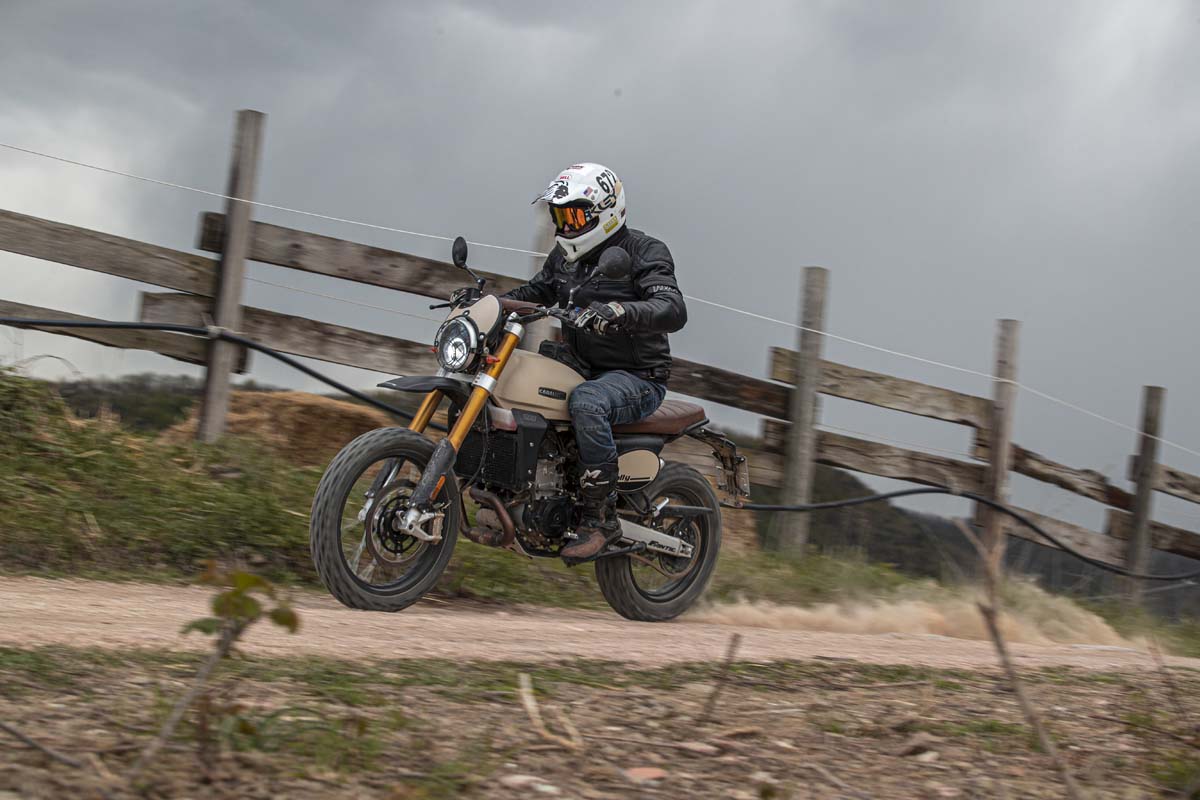 The ByBre brakes are excellent and proved to be enduring, even on longer pass descents and despite only a single disc on the front end. The ABS works inconspicuously and intervenes pleasantly through balanced chassis tuning. For off-road use, this can be deactivated after start-up by pressing the ABS button for three seconds. 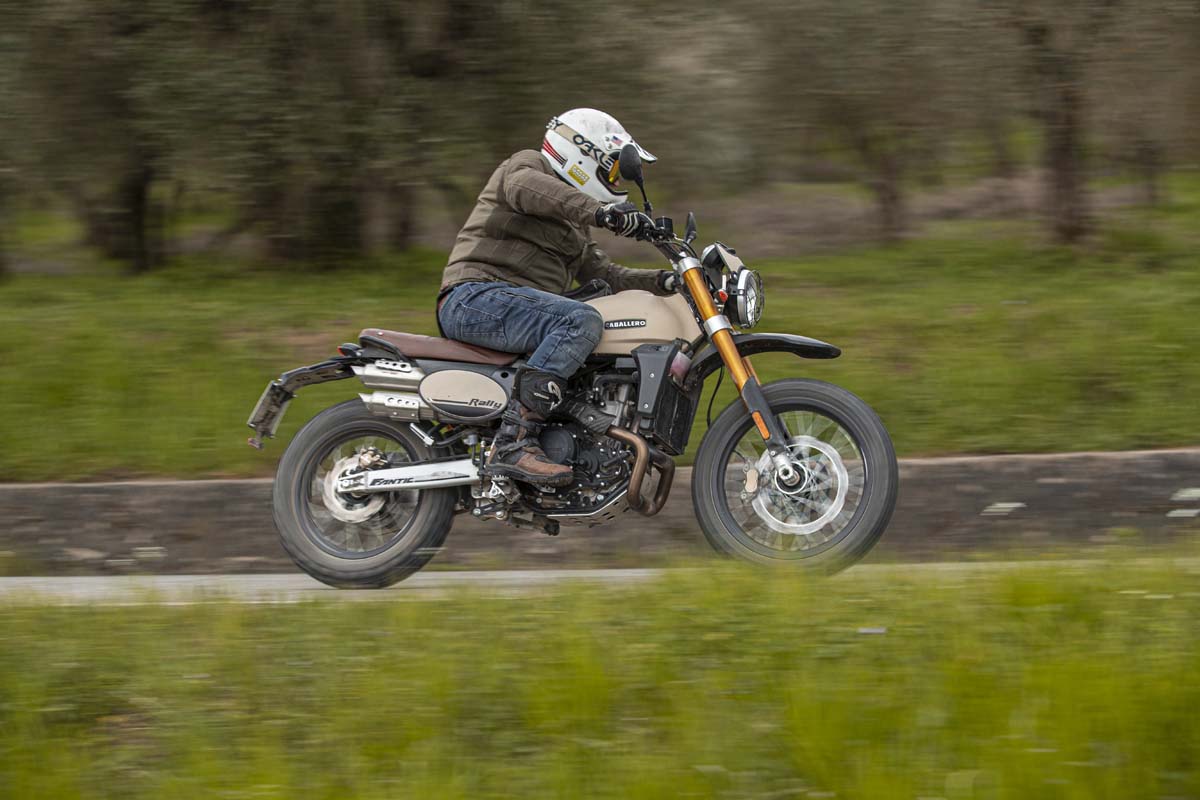 Move off the tarmac and the Caballero Scrambler 500 can easily keep up on the simple gravel roads of Tuscany and is a lot of fun until the terrain becomes really demanding: then the suspension elements are overtaxed and it is best to choose the Rally version. On the Rally's front fork, the spring preload can be adjusted in the right fork leg and the rebound damping in the left leg, while the shock absorber can be adjusted for spring preload, compression and rebound damping. 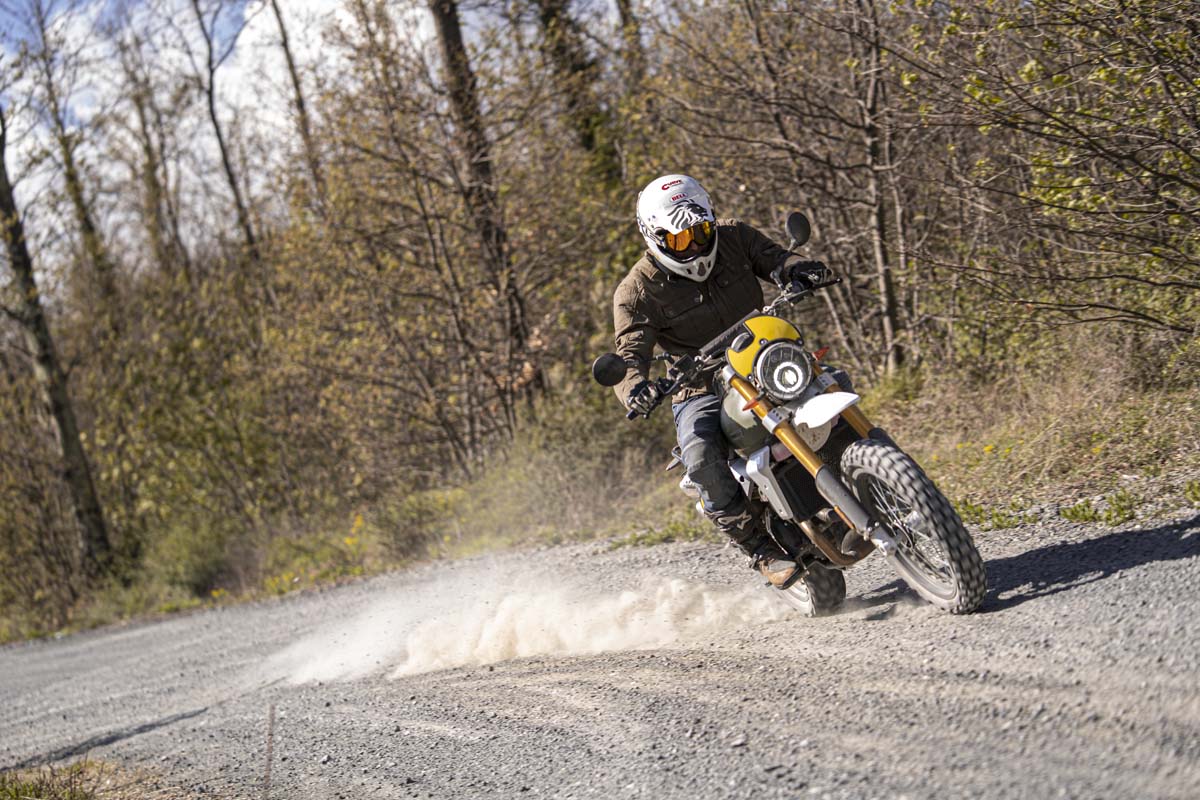 On the highway, the Rally 500 does surprisingly well: cruising speeds of 120-130 km/h are possible over the long term, above which the vibrations in the handlebar ends become noticeable. Given the 450cc engine and enduro-spec tyres, a genuine 150km/h top speed is really remarkable for a machine of this type.

The Fantic keeps well on track in terms of fuel economy and the entire test saw an average consumption of just under 5 litres per 100km. Tank size is 12 litres.

The most important information in the cockpit, such as speed, time and tripmeter, is easy to read on the compact LCD instrument pod. Additional information, such as RPM or fuel gauge, is more difficult to see, although there is an overly large fuel warning light to compensate for the latter.

The stripped-back, basic aesthetic driving the Caballero means there are no riding modes or assistance technology beyond the ABS. That’s not a bad thing, though, as it helps keep this bike affordable.

LED lighting is standard and the headlight’s high beam illuminates the road excellently, but the borderline of the low beam is cut too sharply and doesn't illuminate the edge of the road very much. Also, due to the soft headlight suspension, potholes cause a strongly vibrating dividing line of the light beam.

In detail, there is still some room for improvement in the arrangement and routing of hoses and cables, but as an overall package, the various versions of the Fantic Caballero 500 can awaken the often invoked Italian "Passione," the passion for motorcycling.

Each rider will find their own favourite within the Caballero range, but for me, the Caballero Rally 500 is certainly the first choice because it has the widest range of applications.