From commuting to touring to trackdays, BMW’s latest S 1000 R can do it all.

Where does BMW’s S 1000 R sit in the modern supernaked market? Depends on who you ask, really, as while ‘supernaked’ is one category, the bikes within it are quite different and appeal to riders with different tastes, riding preferences and budgets. 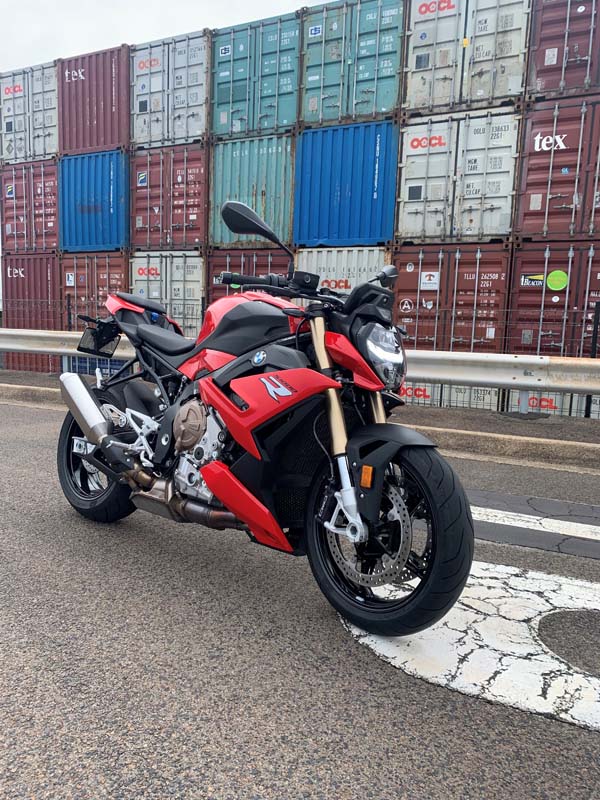 There’s the exotic Ducati Streetfighter, MV Agusta Brutale and Aprilia Tuono at one end of the supernaked spectrum and Yamaha’s MT-10 and the Kawasaki Z H2 at the other, with Triumph’s Speed Triple and KTM’s 1290 Super Duke somewhere in between. So where does BMW’s S 1000 R fit into this field? It’s an interesting question and while the BMW may not be perceived as a balls-to-the-wall supernaked beast like some of its rivals, it may just be the ideal “real world” bike in this category. 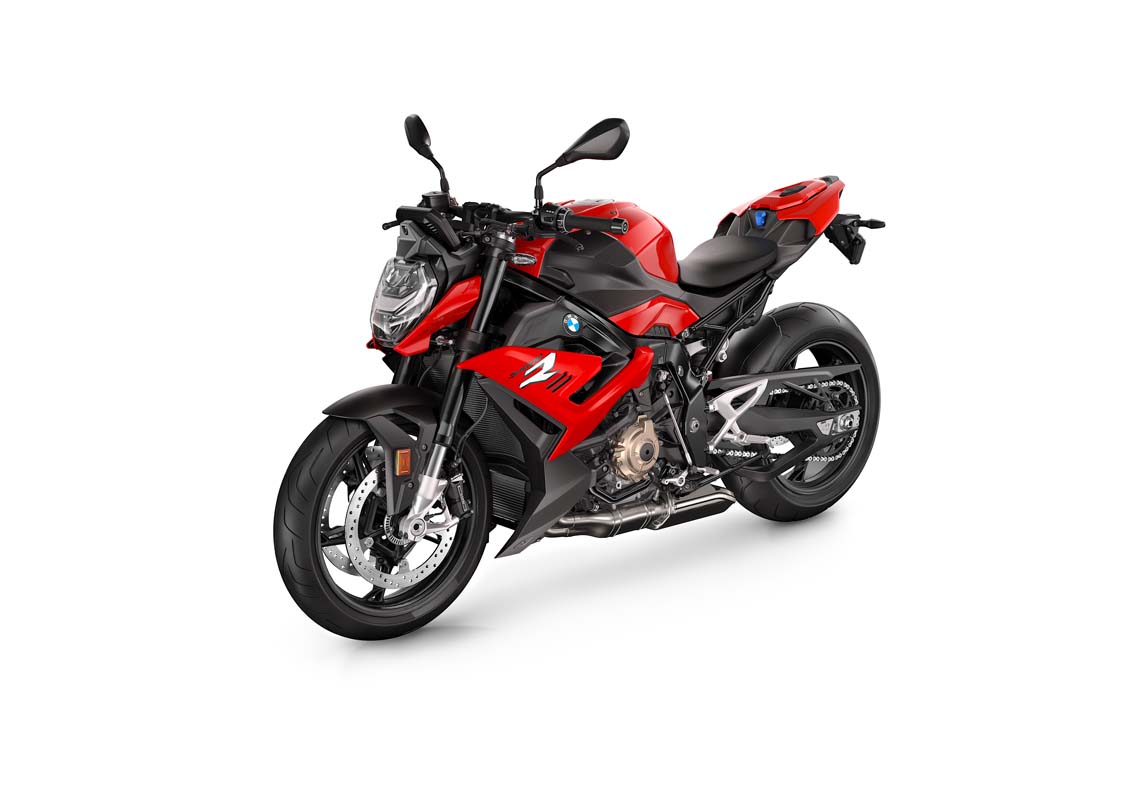 Welcome to the New-ish

That asymmetrical twin headlight treatment that gave BMW a point of difference some years ago (but repelled as many people as it attracted) has finally been removed and in its place is a new single unit LED headlight.

It’s more conventional looking than what it’s replacing; arguably too much and perhaps a little bland.

The space between the headlight and new TFT instrument screen is a little bit messy, but there’s an accessory flyscreen available to cover that. 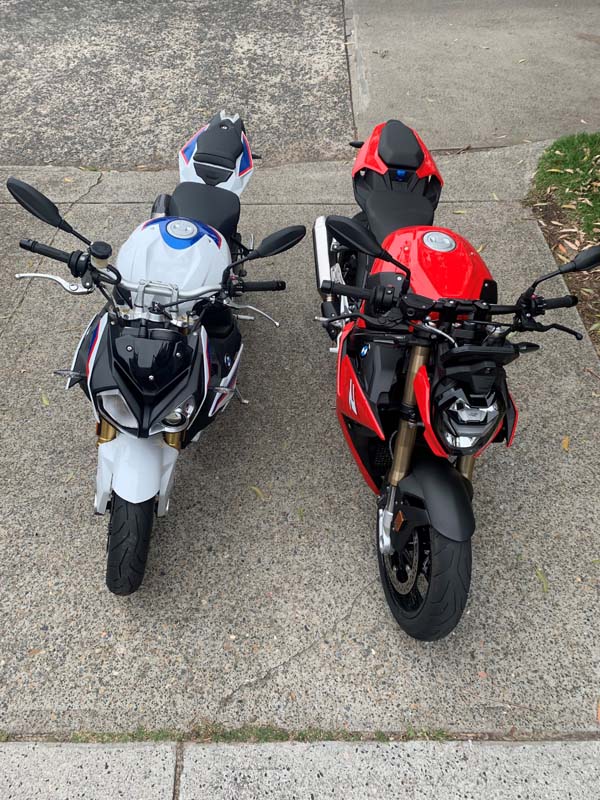 All the other plastics have been restyled, too, to better effect than the headlight, in my view. And as I wasn’t a fan of the old tail, I particularly liked the new “vented” treatment and kick-up of the MY21 model’s tail that lends a racy, European look.

The handlebars are flatter and wider, the front indicators have been relocated to the forks and BMW have done some clever things with colour, too, like blacking out the yokes, bars, bar risers and levers. BMW have also finally replaced the bulky and ugly front brake master cylinder with a slimmer, more attractive unit.

Looking at the studio images, this approach seems to have been taken with every version of the MY21 S 1000 R, from the base model that I had on test to Sport, Race and M-Sport variants. The base model also blacks out the subframe, whereas the others have a pale gold finish. 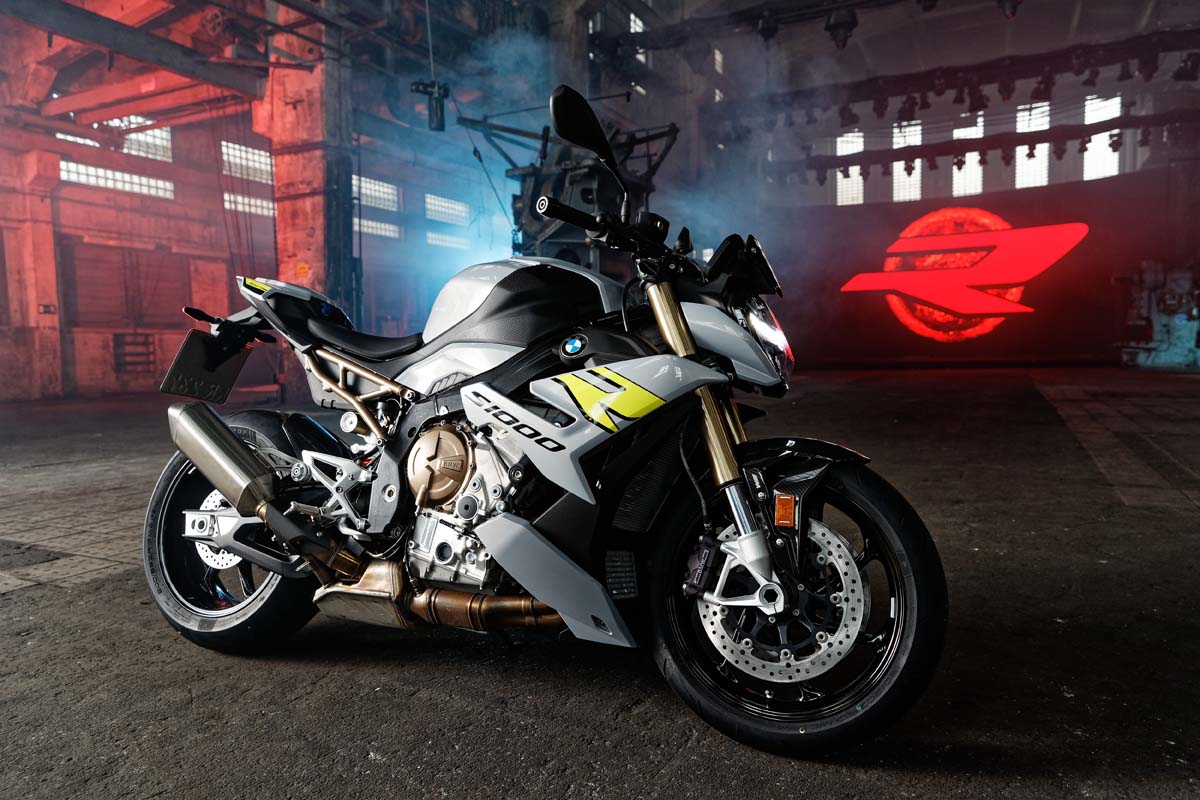 While that headlight is a little bit of a letdown, the catalytic converter that hangs under the swingarm is worse. I understand it’s necessary to meet Euro5 requirements, but it’s a big, fat eyesore. Adding a bellypan or even coating the cat in black heatproof paint could have made it less obvious.

The other contentious styling element – but not in my opinion – is the rear light treatment.

Like some other BMW models for 2021, the latest S 1000 R does away with a traditional tail/stop light and incorporates both these functions into the rear indicators. 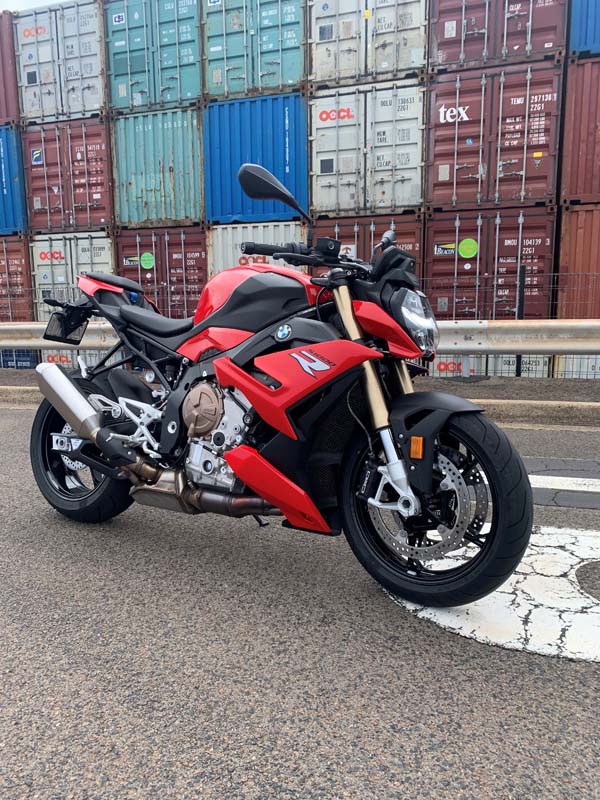 Some have criticised this, claiming that the indicators aren’t visible when you’re braking. Of course, braking and indicating are functions that are usually combined, so I can see the critics’ point, but it’s not something I’ve experienced or am in agreeance with. What I will say is that the LED tail/stop/indicator lights are very bright.

Height aside, the new seat is comfortable and supportive, which given its slimness and design is impressive.

Riding position is quite neutral, as you want from a naked, with a slight lean forward to reach those flatter, wider handlebars.

After experiencing the MY18 S 1000 R’s switchgear, everything on the MY21 version was familiar, but if you’re a newcomer to the model, you’ll work it all out very quickly as everything is positioned and logically labelled with Germanic efficiency.

My last experience with an S 1000 R had a combined analogue-digital dash. That’s been replaced with a colour TFT screen that offers a customisable display and has Bluetooth smartphone interface as standard, allowing app-based turn-by-turn navigation.

With all the important information prioritised and colours used for differentiation, everything on the 6.5-inch screen is easy to see at a glance – it’s a huge improvement over the old instrument display.

According to BMW, engine speed range has been made “wider and fuller,” with a “markedly linear torque curve, too.” More simply put, the MY21 S 1000 R is easier to ride.

BMW says the drivetrain is lighter by 5kg, part of an overall weight reduction of 6kg (wet) compared to the MY20 model, which includes a lighter exhaust.

Other changes for the 2021 model include the adoption of engine drag torque control (MSR in BMW parlance) that reduces rear wheel slip under deceleration and when downshifting. There’s no traditional ignition key, either, replaced with a proximity key and ignition button that takes a bit of getting used to.

Like the previous model, take off on the new S 1000 R was super smooth and that inline four is extremely forgiving, allowing you to take off in second or even third gear if you haven’t changed down at a stop.

The electronic throttle is light, requiring very little wrist action to get the S 1000 R moving, and when it is moving, power delivery is super smooth. BMW claims a wider engine speed range with the 2021 model and I can’t disagree - it’s just the most beautiful bike to ride in the city, be it through heavy stop-start traffic or crawling along at a snail’s pace, thanks to that effortless throttle movement.

Counteracting this slow-speed trundling is an ability to get up to licence-losing speeds very quickly – even in first gear. That speed range makes the S 1000 R not only great for everyday commuting, but also touring, weekend rides on your favourite twisty road and track days. 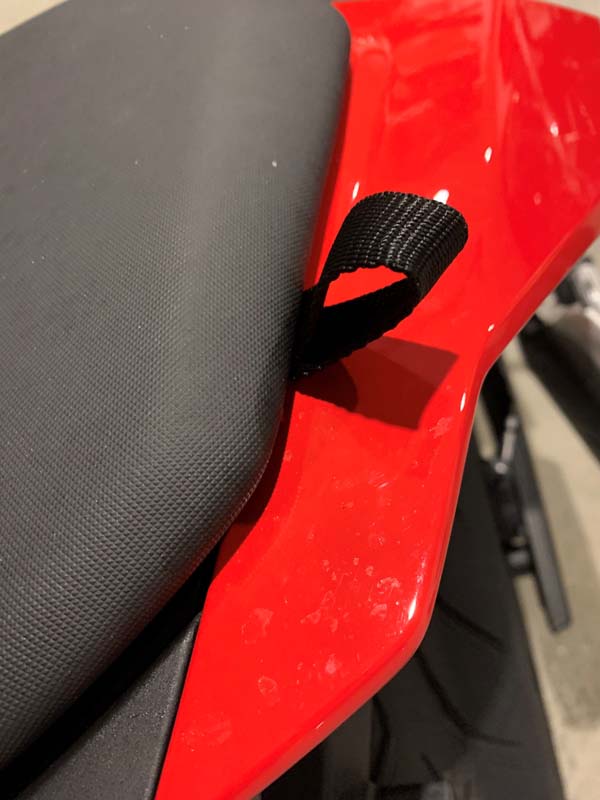 Gear changes are as smooth as the acceleration, thanks to a new anti-hopping clutch for 2021, while the introduction of longer ratios for the fourth, fifth and sixth gears allow more relaxed cruising on highways and long country roads. The standard cruise control helps here, too.

Riding modes have been expanded, with the previously optional Dynamic mode joining the existing Rain and Road modes as standard across the MY21 S 1000 R range (other grades add more options). Other rider assistance and safety tech is mostly carryover from the 2020 model, including ABS Pro and Hill Start Control.

In terms of the handling, the S 1000 R always feels well planted on the road, but the 2021 model benefits from a new, lighter frame, based on the S 1000 RR. This ‘Flex Frame’ construction means the engine now takes on more of a load-bearing role than previously and has a narrow cross section that makes it easy to straddle and allows more freedom of movement on the bike – not something that you’ll appreciate every day but will come into its own on twisty roads and for track days.

The swingarm also comes from the S 1000 RR and moves the monoshock further away from the engine, ensuring a more consistent damping response, improved rear tyre grip and reduced rear tyre wear.

Rear suspension travel is down from 120mm to 117mm, and while front suspension travel is unchanged at 120mm, the Marzocchi USD tele forks are now 45mm, instead of 46mm. Preload, rebound and compression adjustability remains at each end. Suspension settings can be dialled up or down for road use, but the standard settings are not only adequate but intuitive and provide a comfortable ride.

I have been told by BMW that I can hit a pothole at 110km/h and by the time my rear wheel has got to it, the computer has altered the suspension for the back wheel to cater for the hole – how crazy is that? It’s not a claim I was game to put to the test, though! 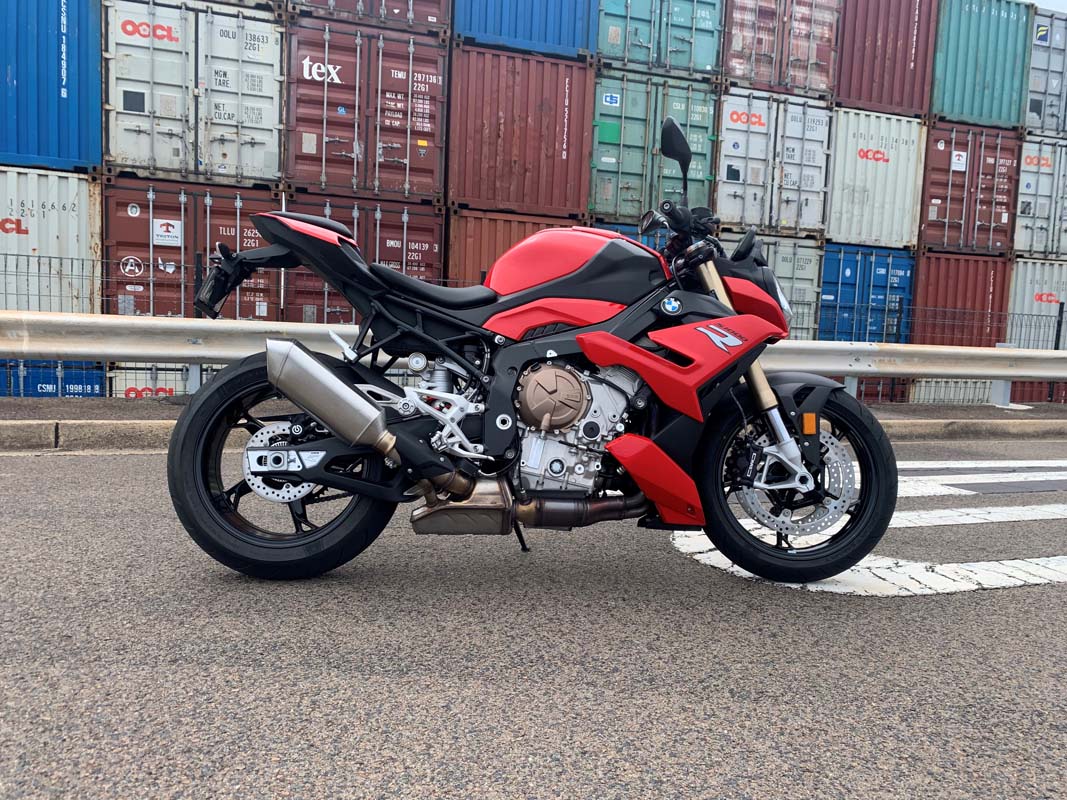 Steering is effortless, with smooth and instant response to input. The bike is set up to take a pillion but all my time with the bike has been as a solo, with no luggage, so I can’t attest to how a load impacts the handling.

Braking mostly carries over from the older model, with 320mm brake discs and four-piston calipers at the front and a 220mm disc with single-piston caliper at the rear. The difference is that Brembo calipers have been replaced with Hayes units for 2021. It’s a minor change, and most S 1000 R riders probably wouldn’t notice the difference, but it’s a change nonetheless.

New calipers aside, the braking remains very effective. Heavy rain in Sydney during my time with this bike meant I have experienced the S 1000 R’s brakes in numerous conditions and found them to be very effective and confidence inspiring.

A Naked for Everyone?

There were a couple of nice additions on the new version, like radiator guards, which can be a life saver, and the fold-out tabs on the pillion seat that make it easier to fasten a day pack or other small luggage items. But one nice surprise which I didn’t realise the MY21 bike had is self-cancelling indicators. I hate it when I forget to switch off the indicators, let alone how annoying it is for other motorists, so this feature was welcome.

My gripes over some of those styling features aside, the 2021 S 1000 R looks good, but for me, this bike’s greatest asset is its versatility – it’s the ultimate all-rounder.

From a track day to commuting to going on a longer weekend ride and even some touring, it's perfect. Or at least, it’s perfect for me. I’m not looking for a tool that’s as “sharp” as some others, so the BMW may not be for everyone.

When I asked where the BMW S 1000 R sits in the supernaked market, I believe the answer is squarely in the middle. That means if you’re looking for a powerful naked bike that’s as usable for commuting and touring as it is on an occasional track day, then the S 1000 R may be ideal.