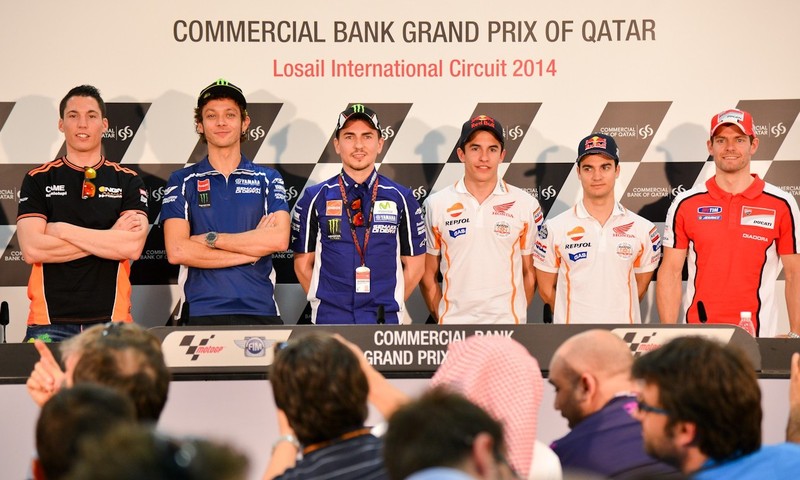 MotoGP season 2014 is about to start, and at the traditional pre-race press conference, the series' top riders discussed their expectations ahead of the opening night race at Qatar, with much of the focus on defending champion, Marc Marquez, who's recovering from a broken leg suffered in a training accident.

In discussing the potential impact of his broken right leg, Marquez explained, "It's getting better but we won't see my level until I get on the bike. It might take some time to get on the pace. It's difficult because I've lost over a month of training and five days ago I couldn't even walk. I can walk now and I think if I can do that I should be ok on the bike."

He added, "It was difficult to be at home whilst everyone else was testing. Anyway I feel ok now and I'm looking forward to the start of the season. I'm not sure the objective is to fight for victory here, though I will need to see how my foot is over the course of the weekend."

Having unveiled the new colours of the Movistar Yamaha MotoGP team before the press conference with teammate Rossi, Lorenzo commented, "It's great news that Movistar have joined our team and we are really excited to go racing. Physically I am close to 100% but I have had three operations over the winter and I've had to work really hard to get my fitness back. The first race is crucial, you don't want to make a mistake here and crash out, it's so important to be on the podium at least."

Pedrosa had a slightly different view about that, countering, "The first race is key of course but the championship is long and you have 18 rounds to prove you are the best. Of course I want to make the best start possible but so does everyone else!"

Rossi meanwhile, is looking forward to getting started on his 19th Grand Prix season. He said, "We need to try and see level this year once the races start as we have been more competitive in testing. I believe Aleix (Espargaro) and the Ducati riders will be strong both in terms of lap times and their race pace.

The races could be different to last year especially at the start and in the first part of each race."

Ahead of his Ducati debut Crutchlow was as honest as ever, telling the press, "I'm trying to learn a new bike and I'm having to adapt my riding style. I have to stop and turn more than carrying the corner speed and we're making progress. Andrea Dovizioso showed the competitiveness of our bike over one lap in Sepang testing so let's see if we can do it in a race."

NGM Forward Racing's new recruit Espargaro previewed the new season, having been impressively consistent towards the top of the timesheets in testing on his 'Open' entry Forward Yamaha.

"I have a very competitive package and I'm really excited to start racing," stated the Spaniard. "The million dollar question is whether we can show our good pace in testing over race distance. Our race simulations have shown the we can. The end of last year was hard for me, I lost some focus and it was a hard decision to change team. But I'm very happy now with the decision I made!"

Regarding the new regulations relating to Factory and Open entries in MotoGP™ the riders each had their own opinions. Lorenzo asserted, "In an ideal world we would have 10 or 15 riders competing to win the title in one class and that is the goal."

A revelation on his Open machine in the off-season Espargaro gave his view saying, "We are racing for the fans and we have to put on a good show. It would be great to see more bikes being competitive and hopefully that's what we will see."

The level of his evolving Ducati package is of key concern to Crutchlow, more so than being classified as a Factory or Open rider, and he commented, "Aleix (Espargaro) has shown how competitiveness he can be with the Open. I don't think the softer tyre is an advantage at all, but let's see what happens."

Free practice for the MotoGP riders gets underway at the Commercial Bank Grand prix of Qatar at 7.55pm local time, with FP1 for Moto3 at 6pm and for Moto2 at 6.55pm.