An old brand and a young event come together with Royal Enfield lending their support to the OpenRoads Rally.

If OpenRoads Rally sounds unfamiliar, that's because it’s a fairly new event on the Australian motorcycling calendar. After finding that no one was offering anything in the form of an affordable roadbook-style rally here in Australia, Jessica Zahra decided to create one herself, with the first OpenRoads Rally held in 2019.

A huge response to that debut event continued for the 2021 OpenRoads Rally, which ran from 16 to 18 April and saw 150 riders take part. 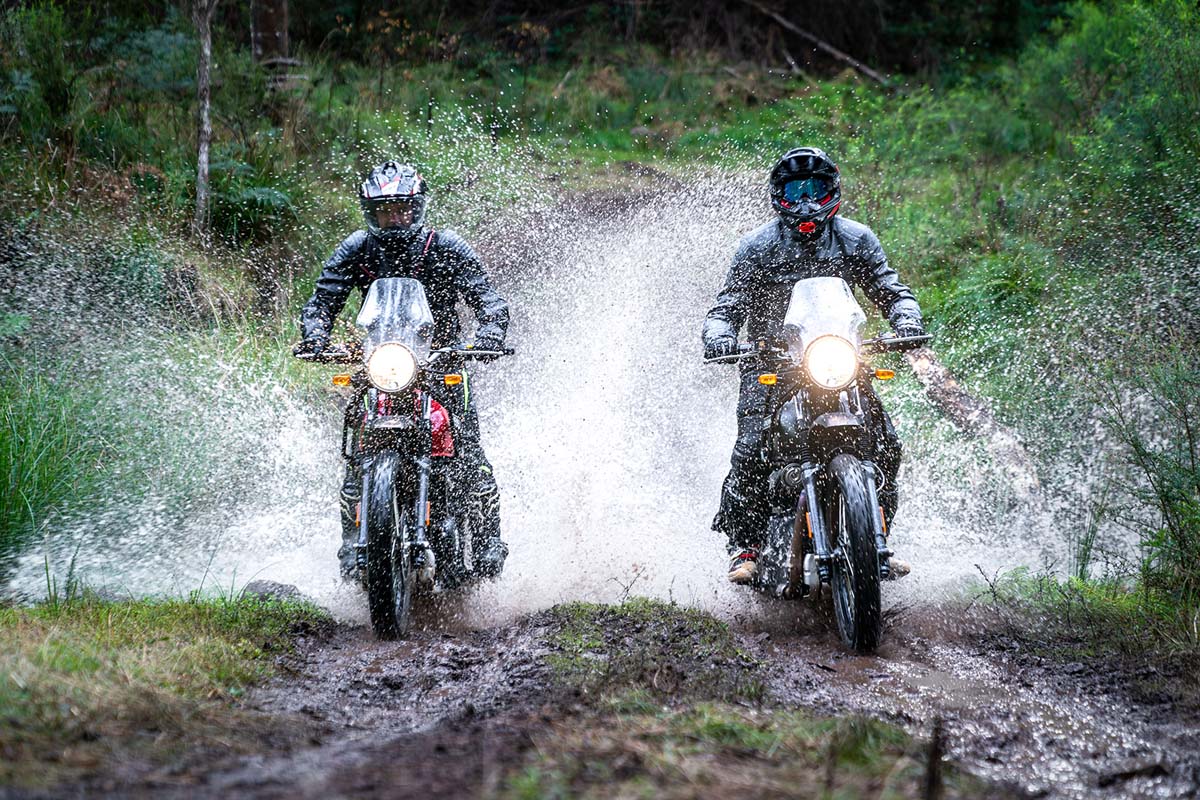 OpenRoads Rally is low pressure, catering for riders of all experience levels, and high fun, with barrel racing, slow racing, an enduro obstacle challenge and other activities on the programme for the three-day event. 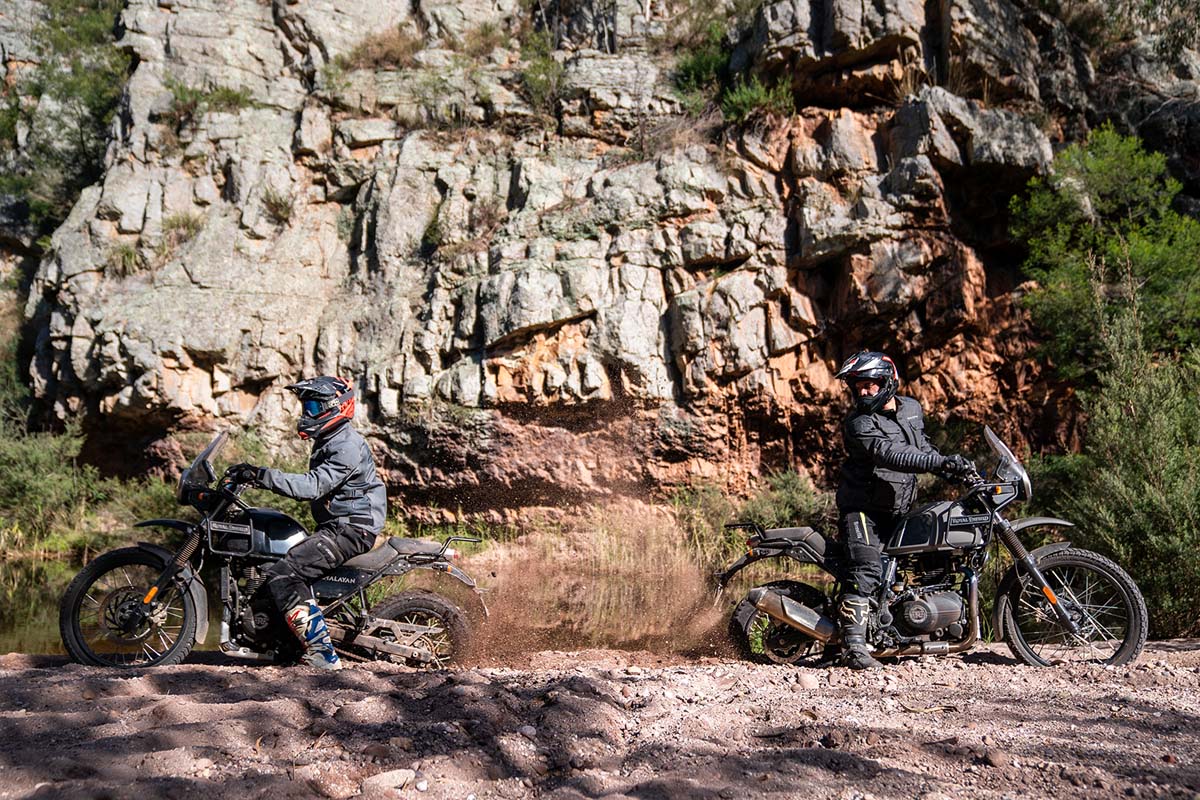 The simple, affordable (only $179 entry fee), grassroots angle to the OpenRoads Rally really clicked with Royal Enfield, who’ve been on board since the beginning and boosted their support this year.

The team at Royal Enfield Australia & NZ documented the journey of three riders on new Himalayan adventure tourers at this year's event in the photos shown here, as well as a video. 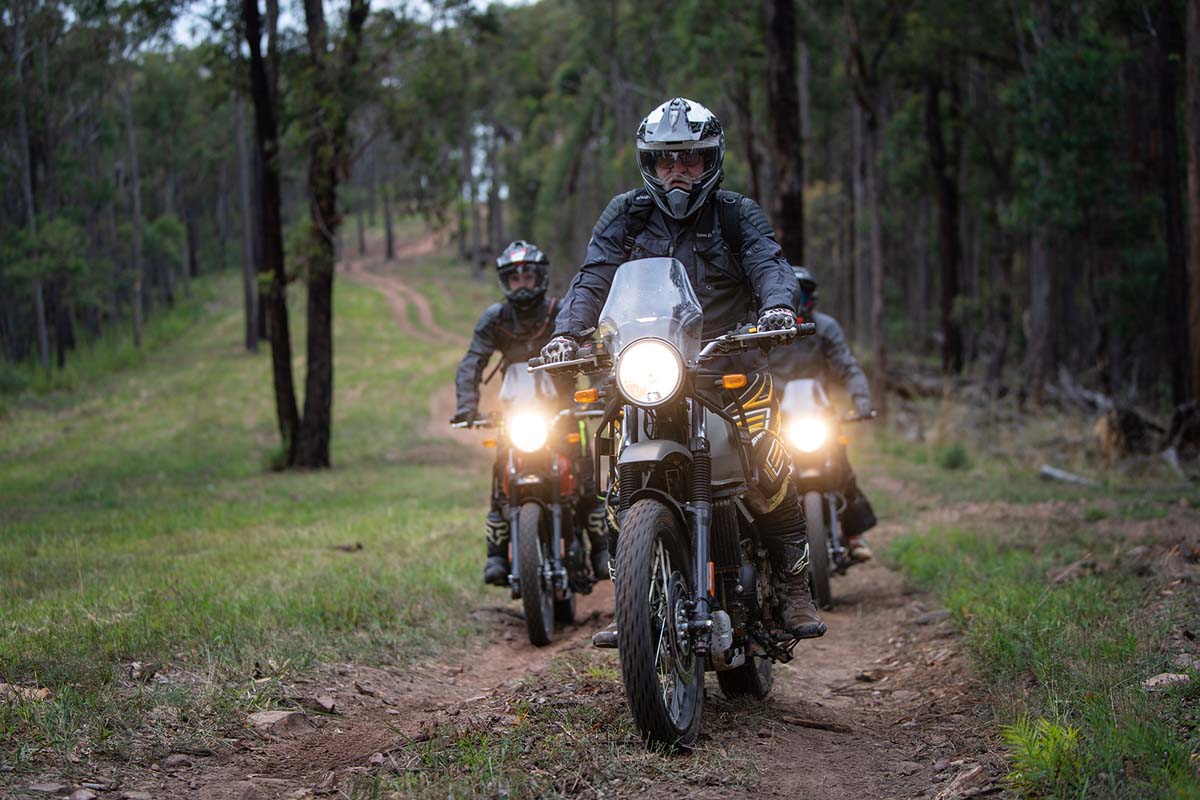 As Royal Enfield’s Himalayan is made to take you just about anywhere you want to go – on road or off – it was ideal for taking on the dirt and gravel tracks, river crossings and other challenges that made up the OpenRoads Rally course.

While Royal Enfield were sponsors, OpenRoads Rally was open to any rec or full reg motorcycle suitable for off-road rally riding, so everything from big, litre-class adventure tourers to small chook chasers took part. 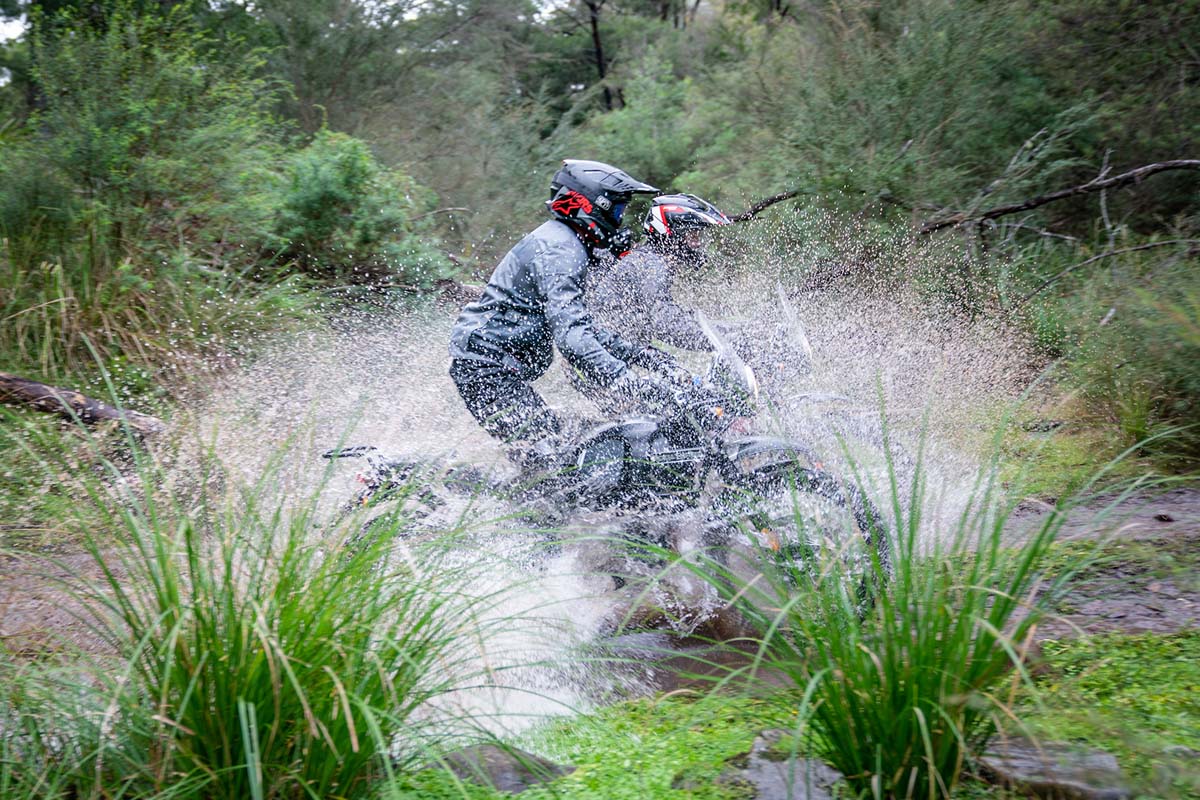 Base camp for the 2021 OpenRoads Rally was Coonawarra Farm in East Gippsland; an area of Victoria that’s still recovering from the 2019-20 bushfires. Rally trails that made up the ‘Royal Enfield Adventure Challenge’ – the core event of the weekend - were a 30-minute ride away at ‘The Quarries’ in Briagalong.

The OpenRoads Rally has been described as an ideal entry point for rookies to learn about rally racing. To that end, special guests were on hand to teach, encourage and inspire first-timers, with the knowledge appreciated by experienced riders, too. 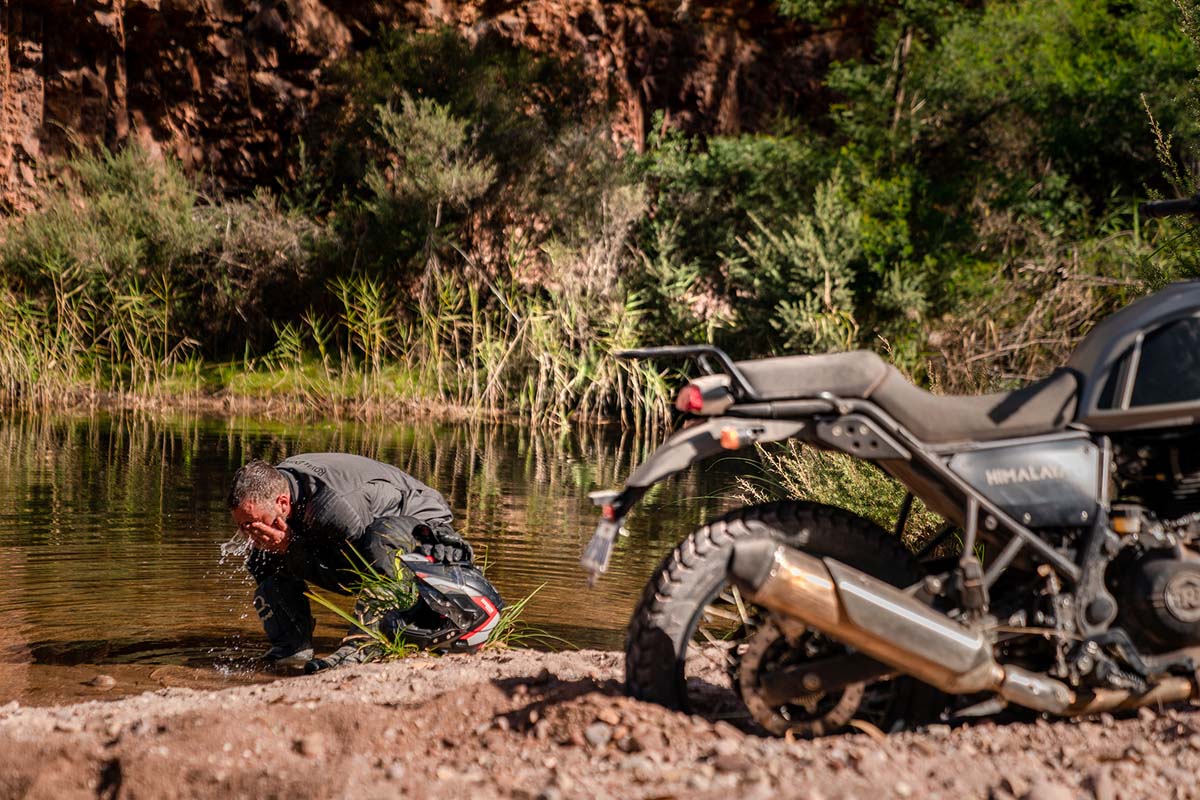 For those more confident in their riding ability, but lacking experience in roadbook navigation, Dakar competitor James Ferguson provided training and tips on how to use a roadbook. 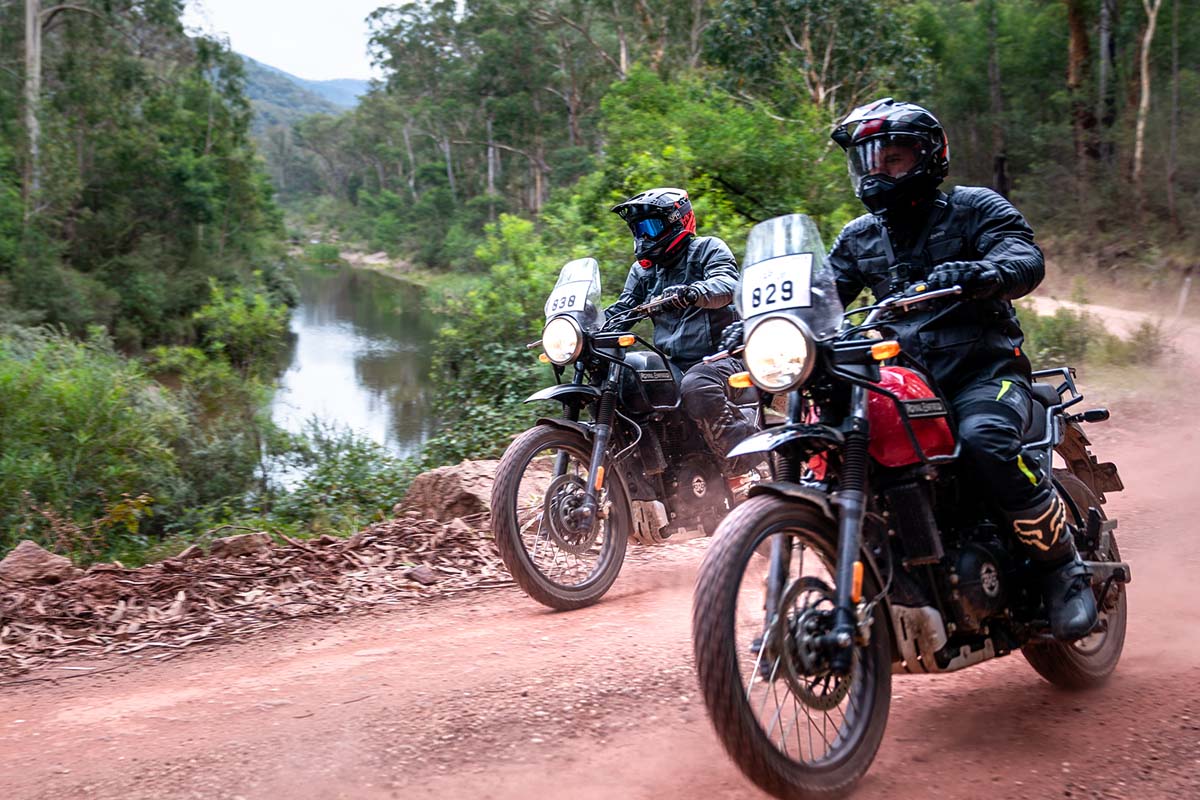 Andrew Houlihan, who competed in this year’s Dakar, shared his story, while another special guest was Benji Brundin, who set a new record riding across all ten of Australia’s deserts, chronicling his life and what led to that extraordinary feat in his book, Hunting Fear. 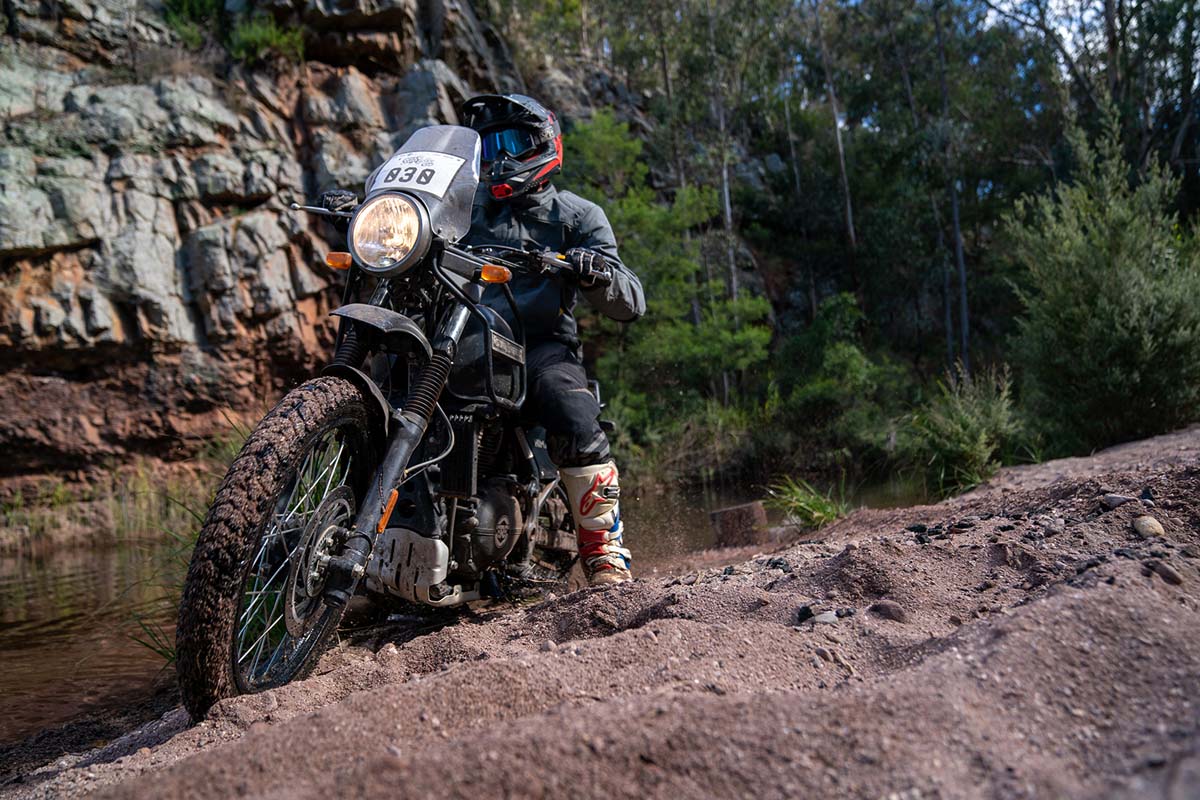 Three routes were on offer for this year’s Royal Enfield Adventure Challenge - Beginner, Intermediate and Advanced. Each was planned to take between two and four hours to complete, with the circuit length, surface and gradients getting increasingly more challenging in the Intermediate and Advanced courses. The latter two offered river crossings, too. 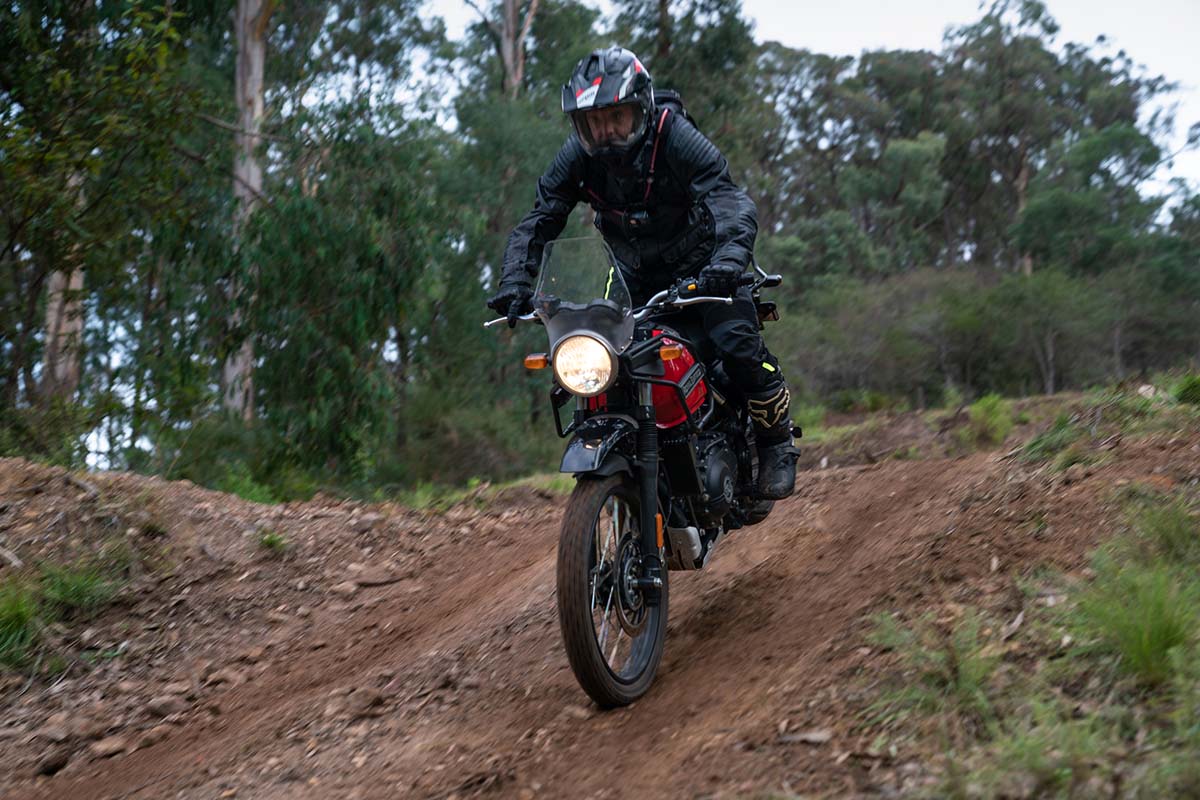 Zahra and her team spent months prior to the event sourcing, scouting and test riding the trails, ensuring each was not only appropriate to the specific skill level, but also accessible, with all the danger areas and checkpoints marked – there were a lot of hoops to jump through to make this happen!

Riders on the OpenRoads Rally have to navigate their way through a plotted course, passing checkpoints identified via a digital roadbook on their smartphone, with points added for every checkpoint successfully reached. 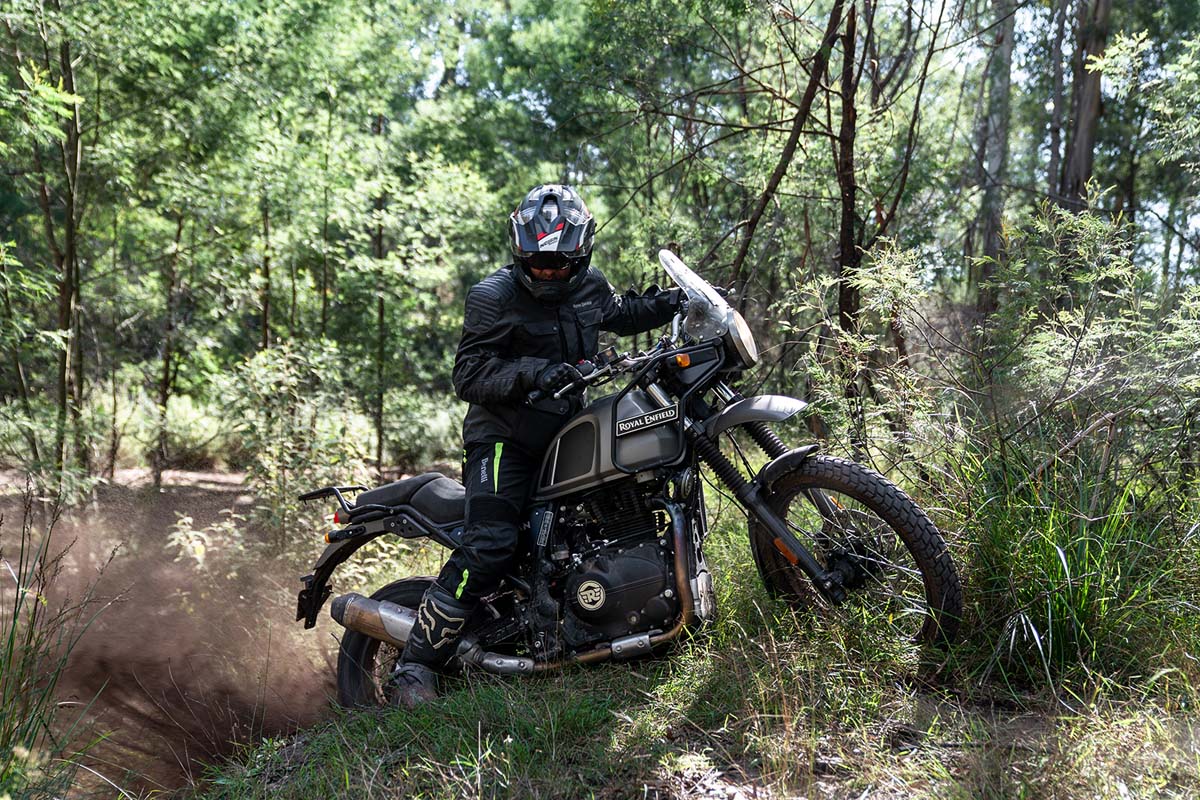 As mentioned, OpenRoads Rally is all about having fun, so riders could boost their points tally by entering a big bike or carrying a pillion, with bonus points for interstate entrants, too, but there were no bonus points for how quickly you completed the course, thus discouraging speeding and giving each rider time to tackle the course at their own pace and take in the scenery. 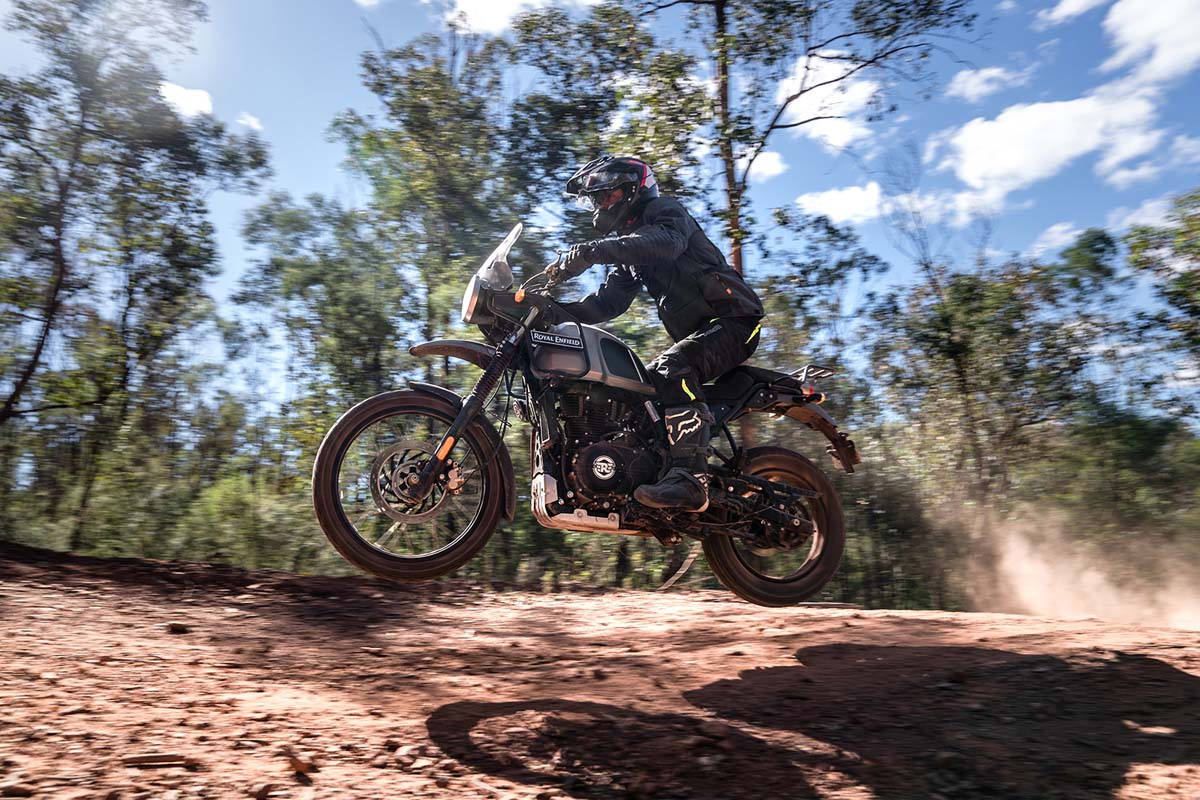 There was an incentive for adding to your points tally, though, with the event’s maximum point scorer winning a $350 voucher from AMX Superstore, while supplementary prizes were provided by Flying Solo Gear Co., Whites Powersports and MXStore.com.au.

Following sign-on, scrutineering, the pre-event briefing and other formalities on Friday, 16 April, the Royal Enfield Adventure Challenge kicked off on Saturday, 17 April, with Zahra leading a guided ride to the start line at The Quarries.

For early finishers and late starters on the Adventure Challenge, trade stalls back at the Coonawarra Farm basecamp presented new gear and rally riding kit. 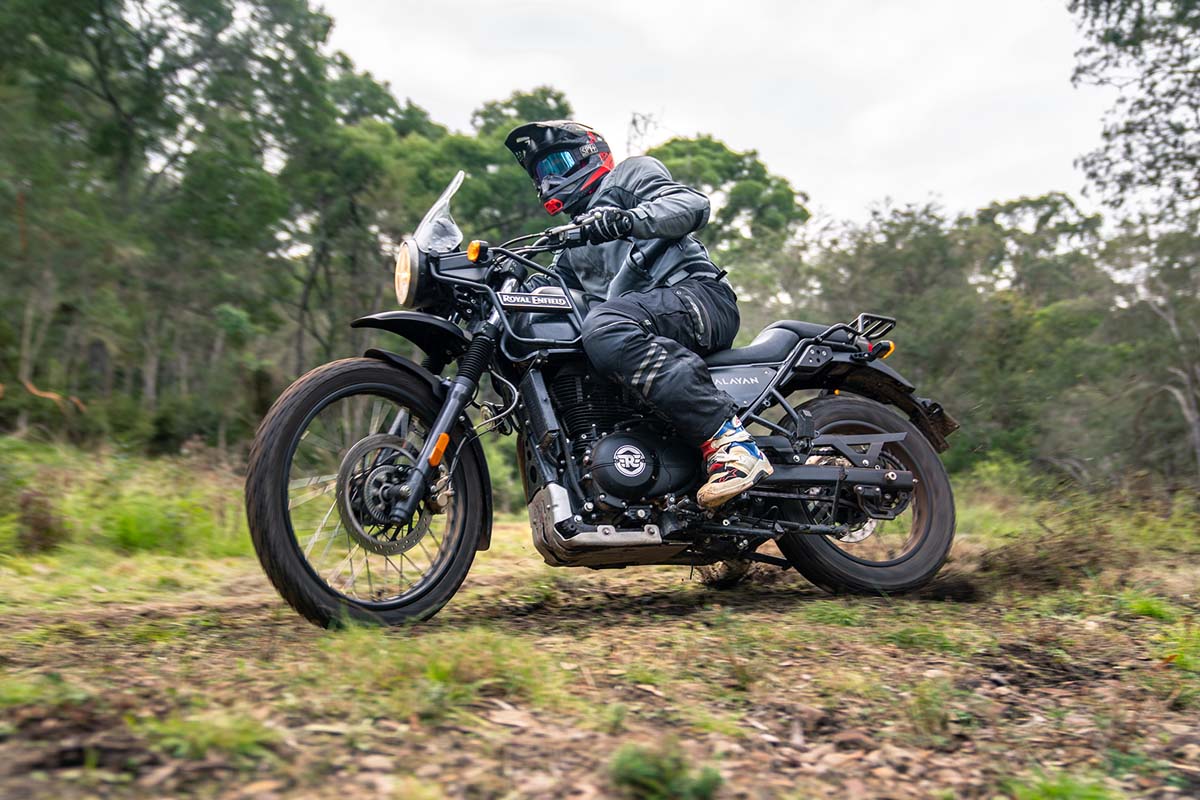 When all riders had returned, those looking to bank a few more points could take part in slow race and barrel race novelty events, with a raffle and the presentation of prizes for the top point scorers rounding out the evening.

Reflecting the event’s inclusive attitude toward first-timers and inexperienced rally riders, the top point scorer at the 2021 OpenRoads Rally was a rookie, scoring himself the $350 voucher and a cool trophy for the pool room. 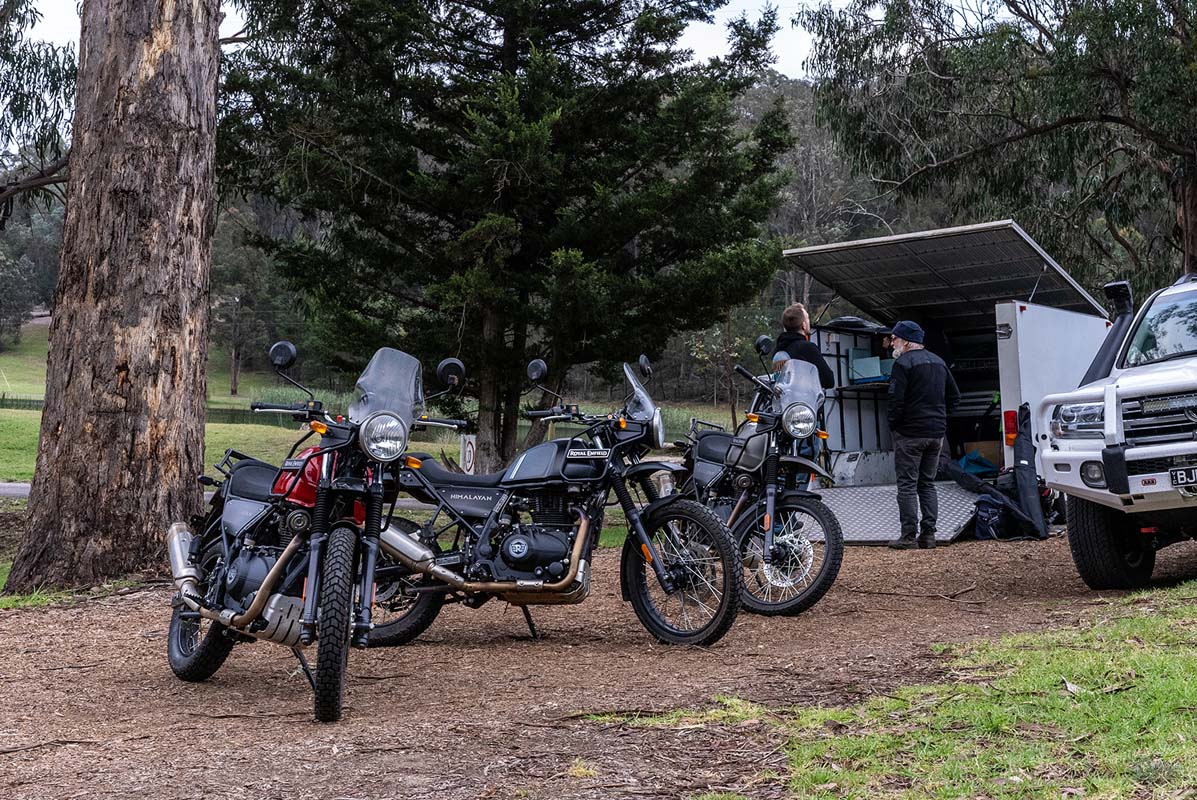 After a big Saturday, the chance for a lie-in on Sunday, 18 April was welcomed by most, but those keen for more could take on a short-course enduro challenge, sponsored by Panhead Brewery, or simply chill before prepping for the return home.

In its brief history, OpenRoads Rally has built up a great following amongst the riding community. This year in particular, Zahra says there was a real positive vibe to the whole weekend, with good feelings and great spirits amongst all involved.

For those new to adventure riding, but who want to learn and build their skills in a relaxed environment, surrounded by like-minded, supportive enthusiasts, the OpenRoads Rally is a great starting point.

If what you’ve seen and read here has given you the taste for next year’s OpenRoads Rally, go to: openroadsrally.com or follow the event’s social channels for updates. Sign up to the event’s mailing list (via the website) and you’ll get notification of ticket availability for next year, too.