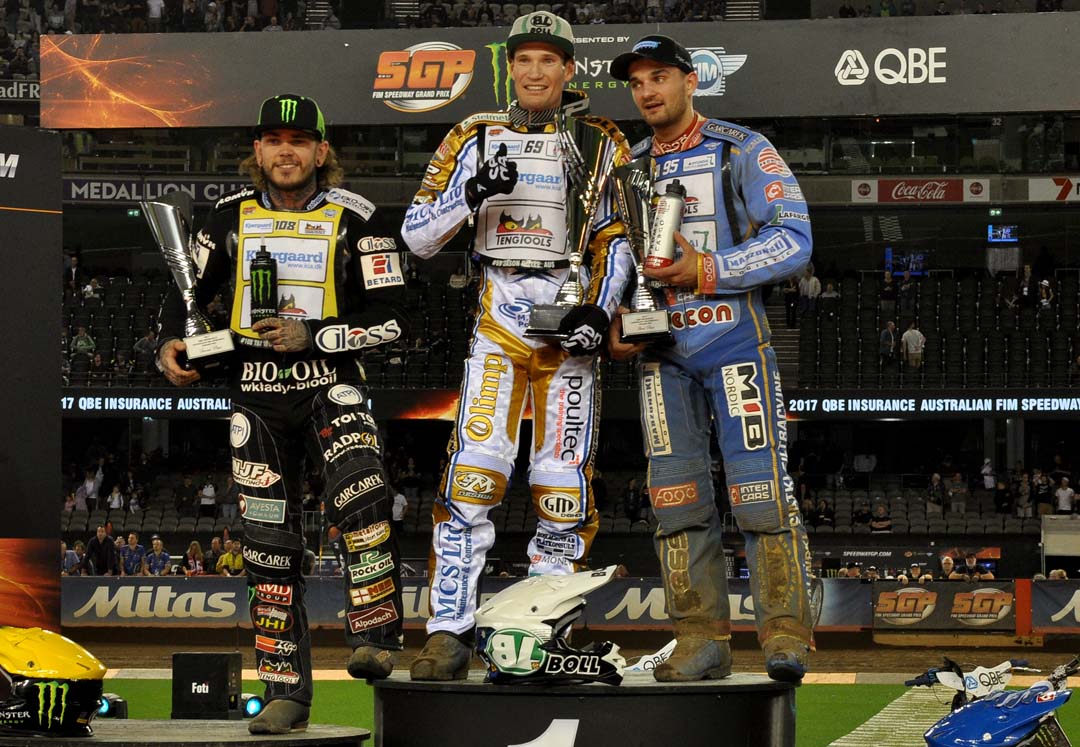 Australia’s Jason Doyle is the new FIM Speedway Grand Prix World Champion after wrapping up the 2017 SGP title at the final round.
Doyle had led the championship for most of the second half of this year’s 12-round SGP season and came to the finale - the QBE Insurance Australian FIM Speedway Grand Prix at Melbourne’s Etihad Stadium, with a 14-point lead - but the 32-year-old knew that nothing was guaranteed.
Melbourne would hold mixed feelings for Doyle, having missed the finale last year after crashing out of the championship lead at the penultimate round, while at the first Australian SGP in 2015, a serious crash saw Doyle hospitalised with a broken neck.
Coming into this year’s Australian round, Doyle was carrying multiple fractures in his right foot, which he has been battling with for most of the second half of the season.
Doyle was one of five Aussies to take to the specially-constructed track at Etihad Stadium on 28 October, with the champion-in-waiting joined by series regular and 2012 champion Chris Holder, plus wildcards Sam Masters, Davey Watt and Justin Sedgemen. This year’s Australian round would be Masters’s third in succession and Watts’s final professional ride, while Sedgemen’s call-up to the main 16 was at the expense of fellow Aussie Max Fricke, who was ruled ineligible after a heavy crash at the previous round in Torun (Poland).
Also representing Australia on the reserves list for the night were Brady Kurtz and Rohan Tungate. 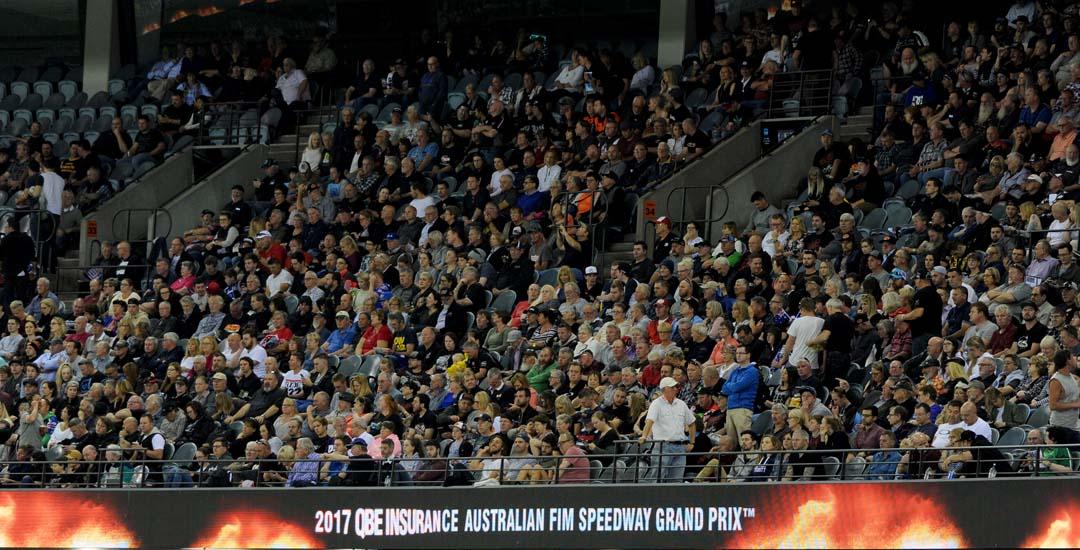 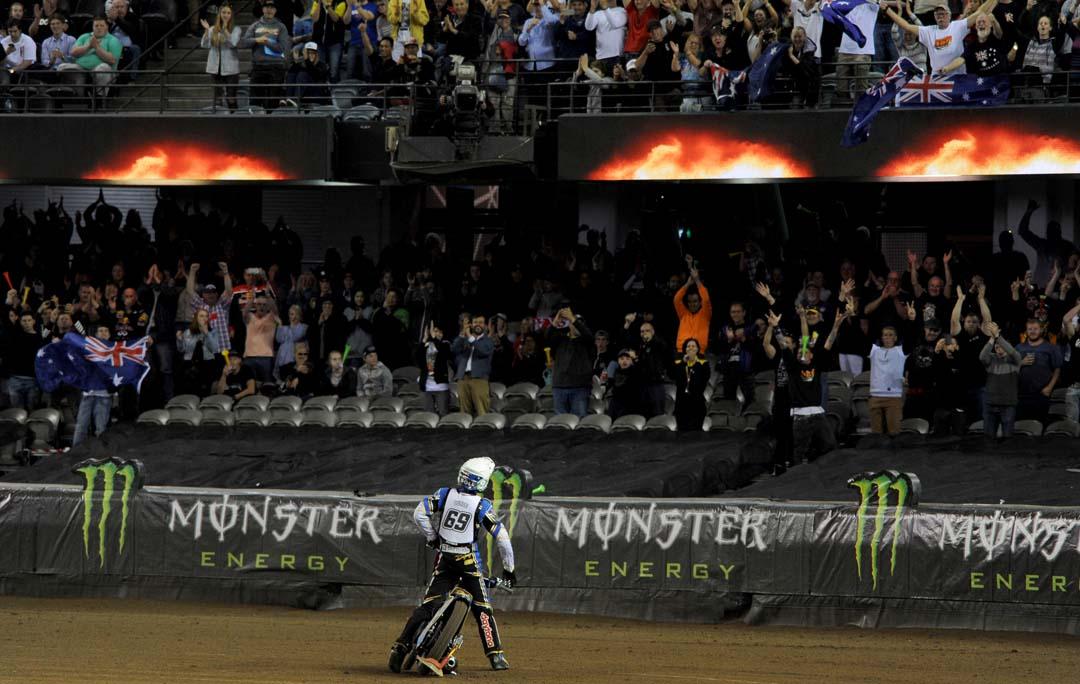 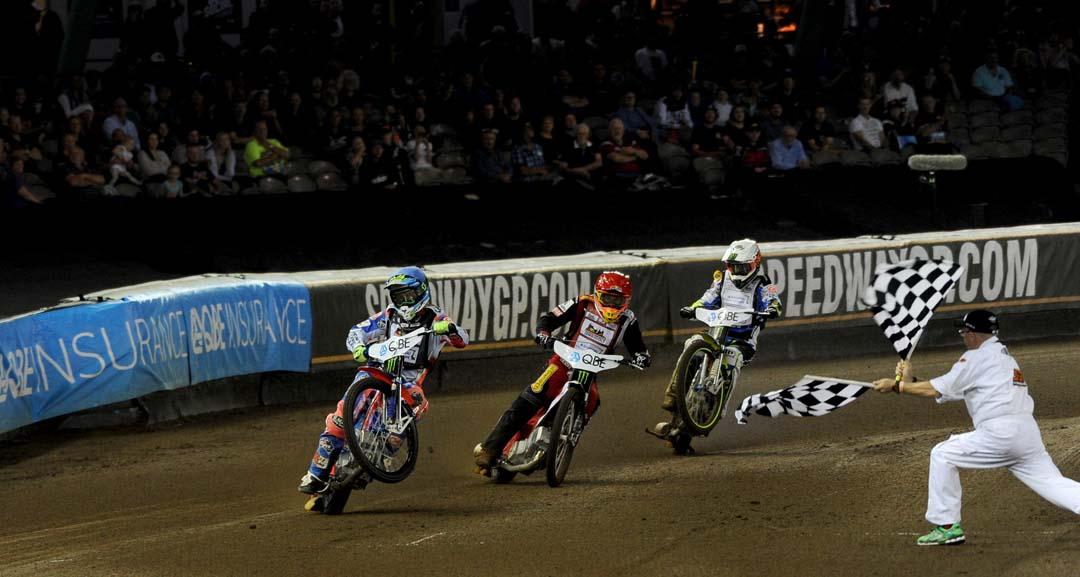 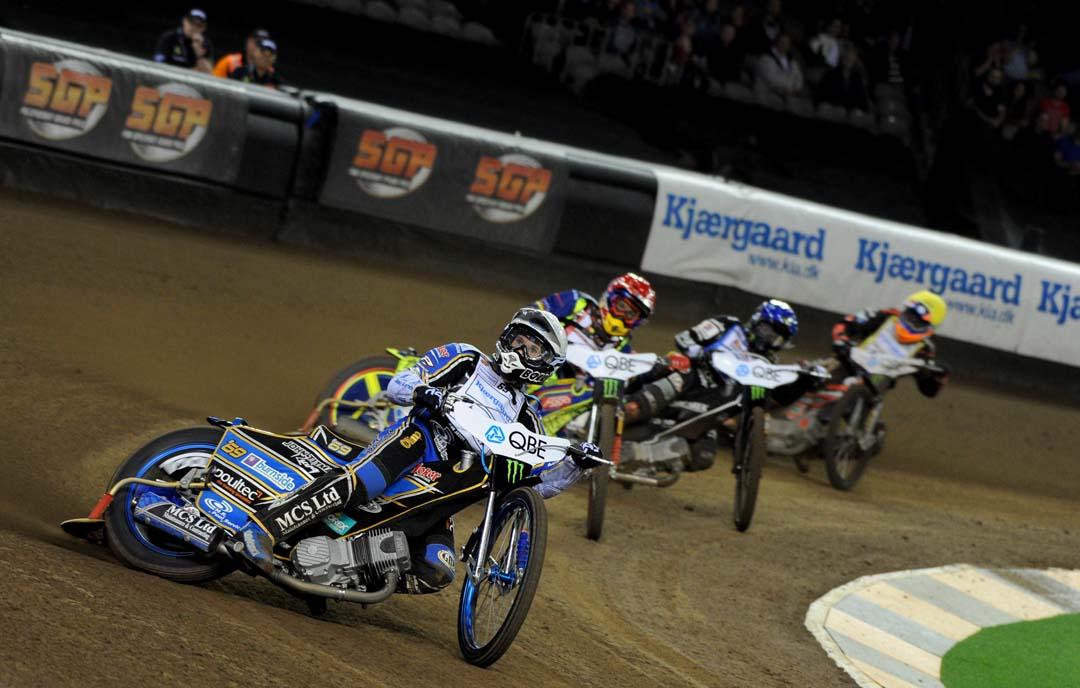 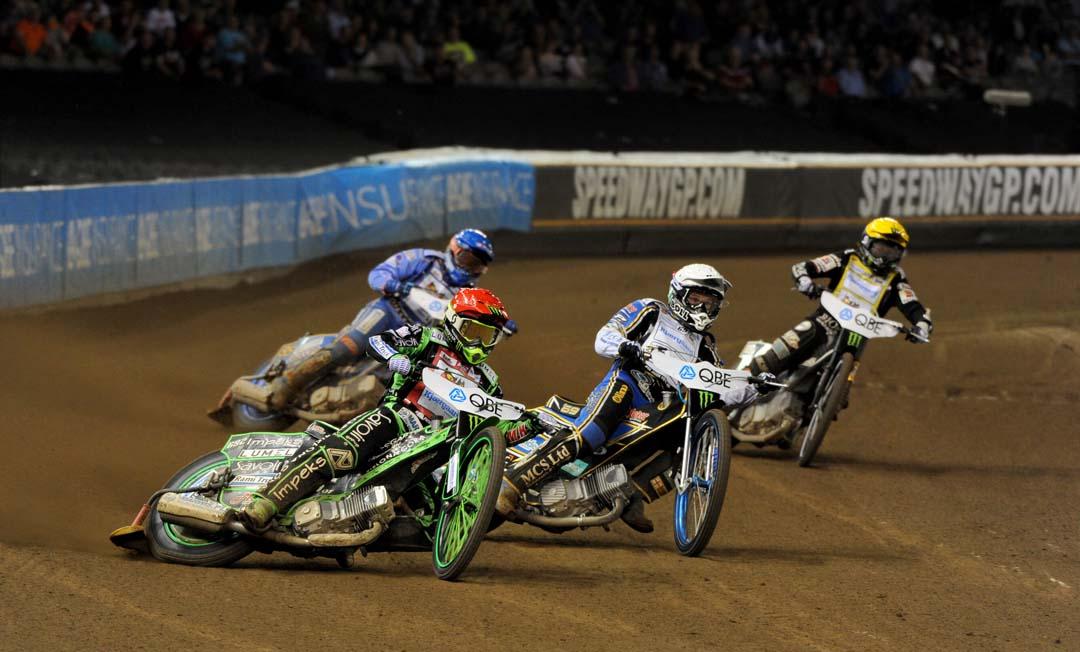 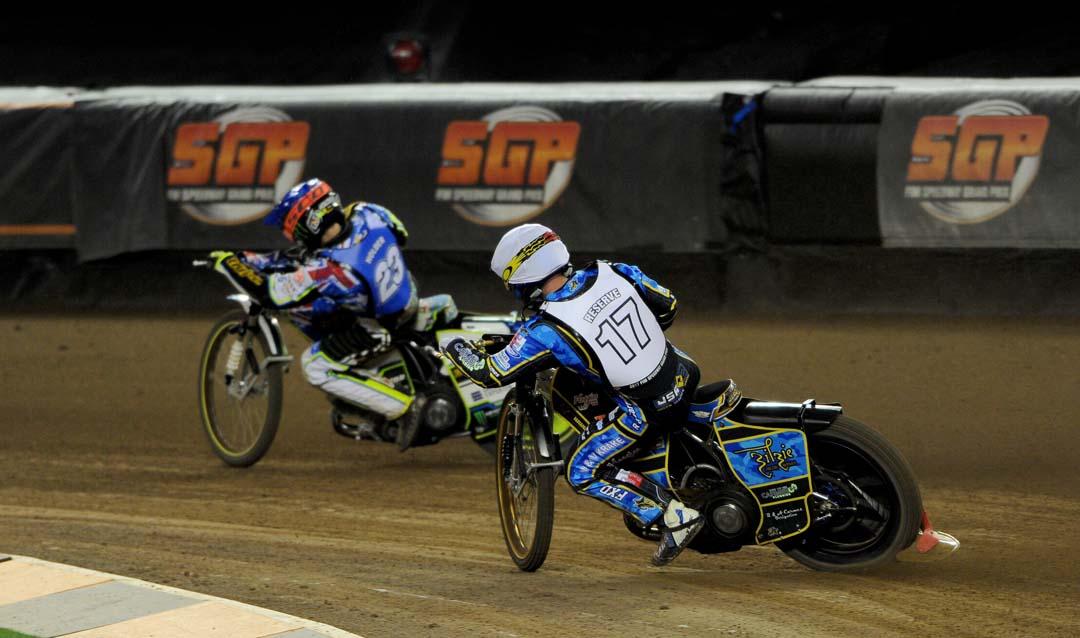 Polish Challenge, Past Champions
At the final round, the battle for the championship would be between Doyle and Polish young gun Patryk Dudek.  Known as “The Dude”, Dudek won the round at Torun, while a seventh overall from Doyle saw his championship lead cut from 22 points to 14 coming to Melbourne. But Doyle would need only eight points to secure the championship, regardless of Dudek’s results in the heats.
Also improving ahead of the final round was 2015 SGP World Champion Tai Woffinden. The British rider was sixth overall after round 10 in Stockholm, but scored a bag of points at Torun to move up to third place. While too far in arrears to win the championship, Woffinden was considered a strong chance for the round win.
Last year’s SGP champion, Greg Hancock, was a non-starter, having dislocated his shoulder in a non-riding accident, which was further aggravated in a fall at round 6 in Wales, forcing the four-time champion to undergo surgery that ended his 2017 season.

At Melbourne
The 20,000+ fans who came to Etihad Stadium for the 2017 SGP finale had something to cheer right from the start when Kurtz won the night’s opening heat and Holder finished third.
Dudek took a second in Heat 3 ahead of Sedgemen, carving a little off Doyle’s points lead, but the Aussie won his opening heat to hold his championship advantage.
Dudek won Heat 5 from Woffinden, but couldn’t close the championship gap when Doyle also won Heat 7, his second start of the night. Another win for Doyle in Heat 10 gave him the eight-point gap he needed for an uncatchable lead in the championship.
With the championship in the bag, Doyle could have switched off, but the Newcastle native clearly wanted to put an exclamation mark on the 2017 season. In Heat 16, he put Dudek behind him in the first heat where the pair went head to head, then won Heat 17, too.
Poland’s Bartosz Zmarzlik got the better of Doyle in Heat 16, as well as the first semi-final, to book a place in the final. Despite missing the championship, Dudek was as determined as Doyle to end his season on a high, winning Heat 18 and the second semi-final to line up alongside Doyle, Zmarzlik and Woffinden in the final.
Ahead of the final, a special mention must go to Tungate, who scored two wins from his pair of reserve rides, but Holder’s night was disappointing; the winner of last year’s Australian SGP round finished no better than second in his heats.
The final got underway with Dudek taking the lead from Gate 1 and Doyle chasing from Gate 3, taking an outside line to draw level with the Pole through lap 1. Narrowly avoiding a collision on lap 2, Doyle harassed and eventually got in front on the third lap when Dudek slowed with a mechanical problem and would eventually be classed as a non-finisher. Woffinden took second ahead of Zmarzlik, but it was all about Doyle; the Aussie ecstatic after winning the round and the championship on home soil. 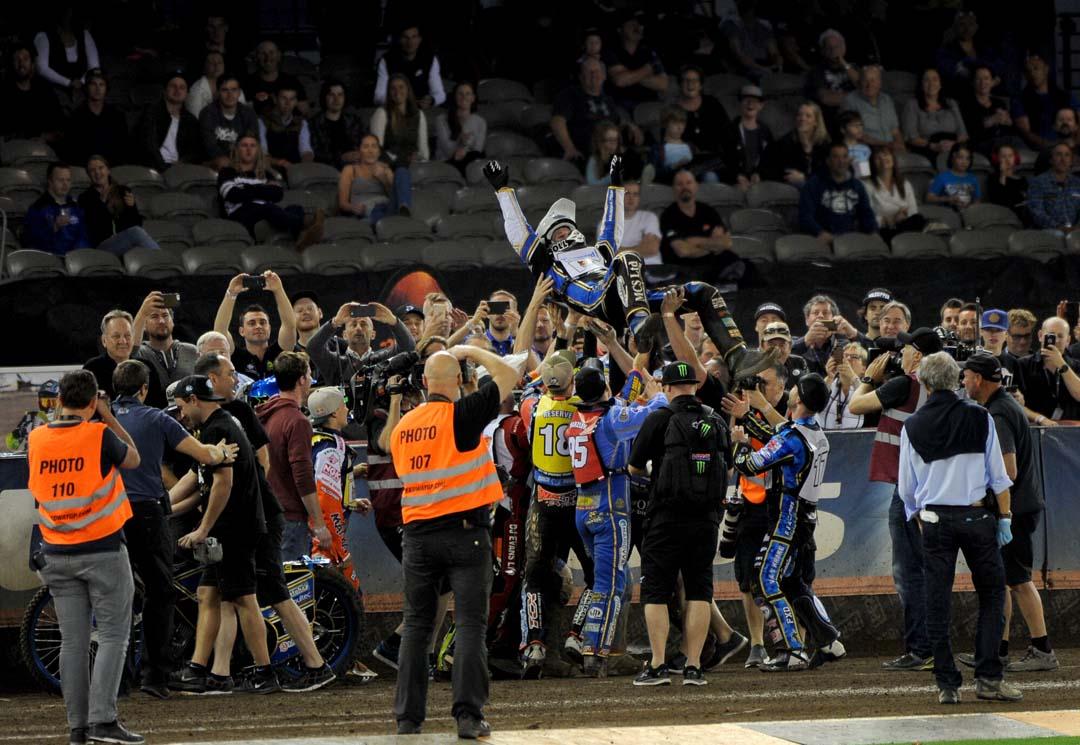 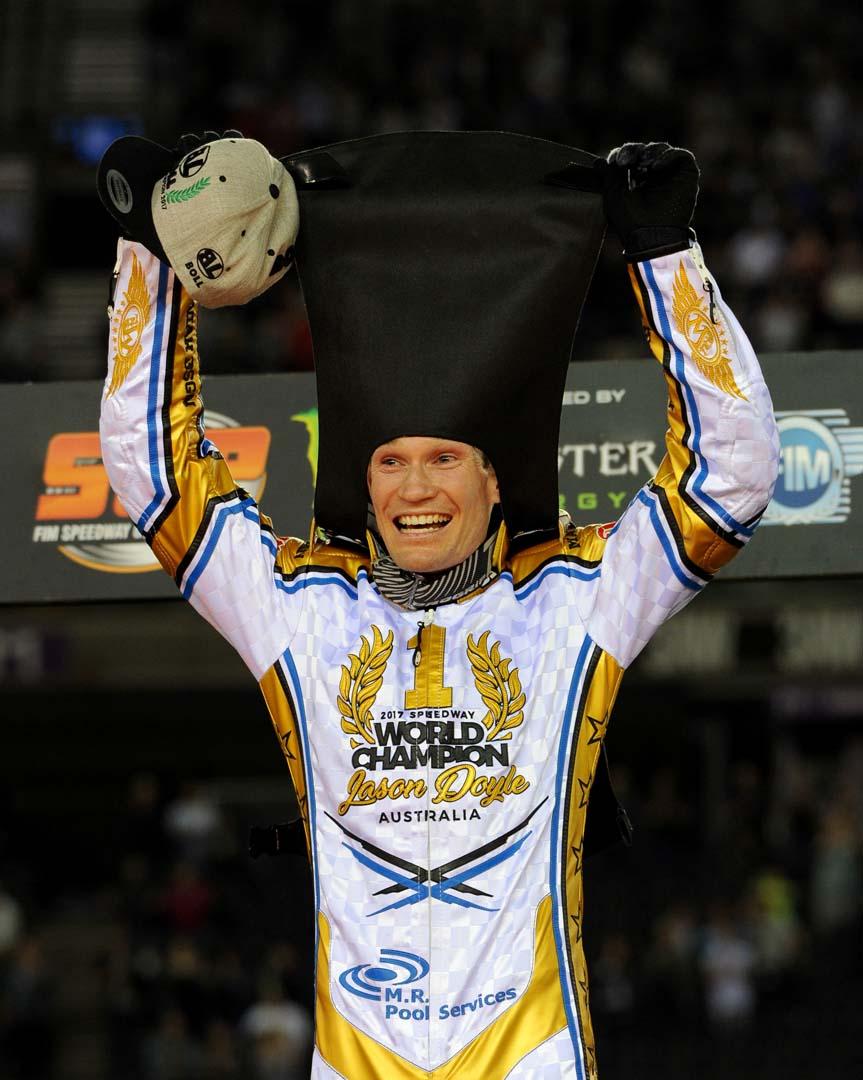 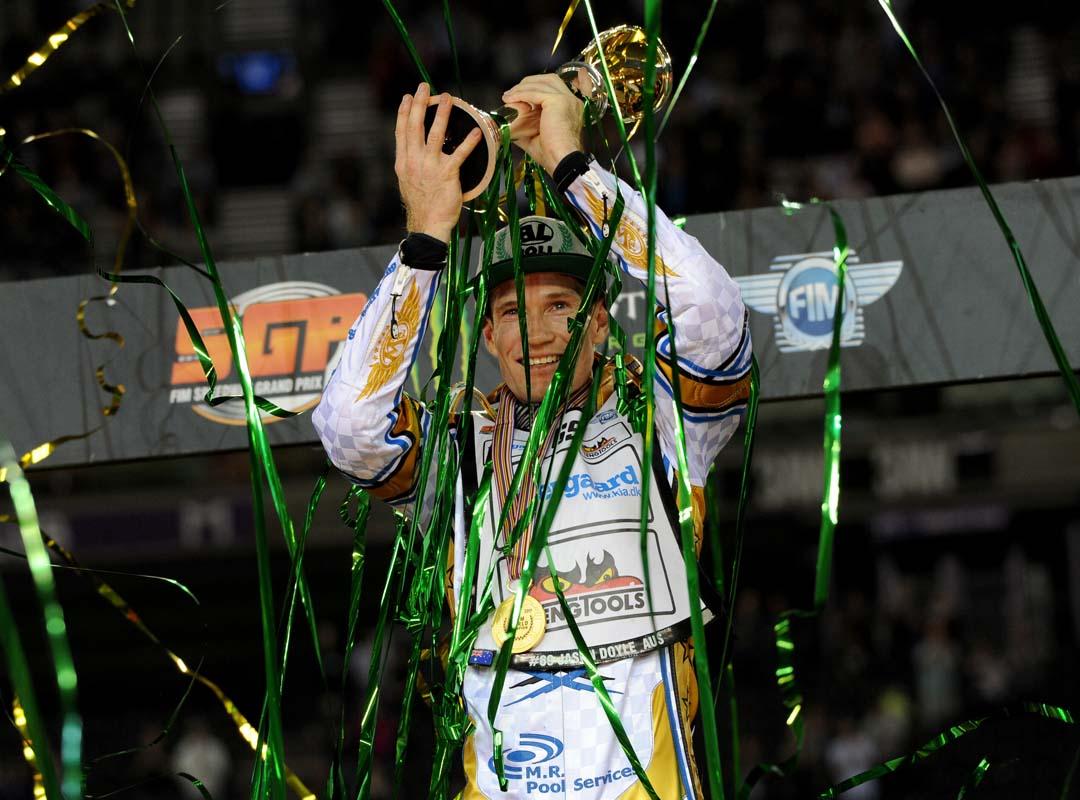 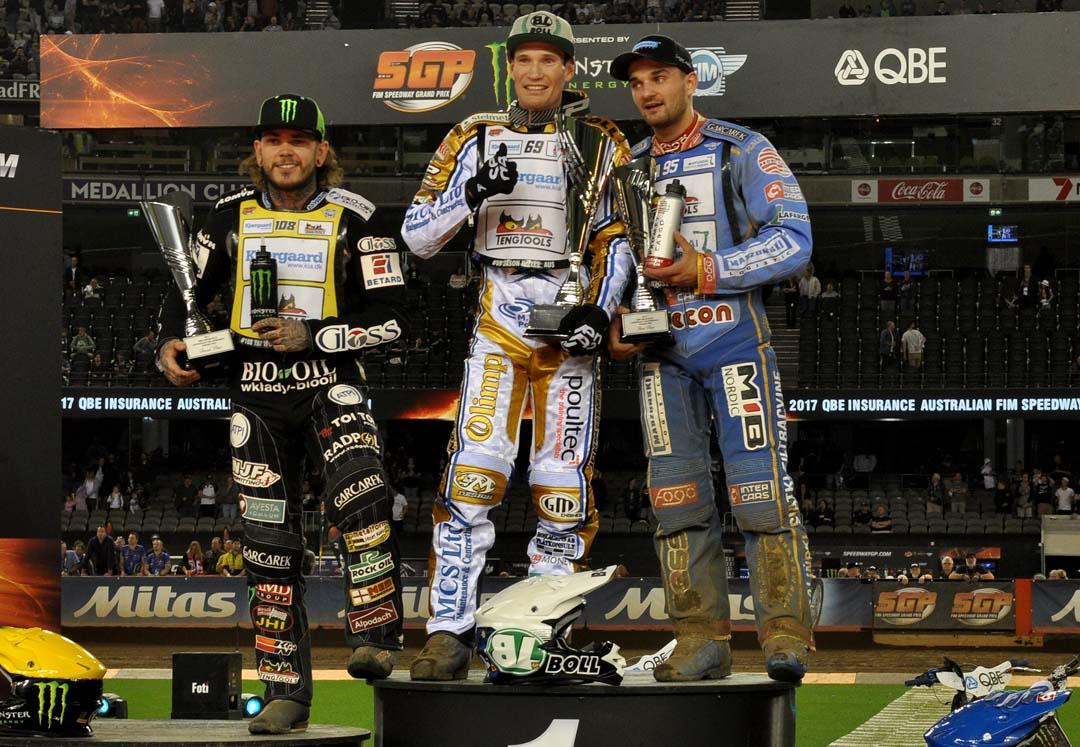 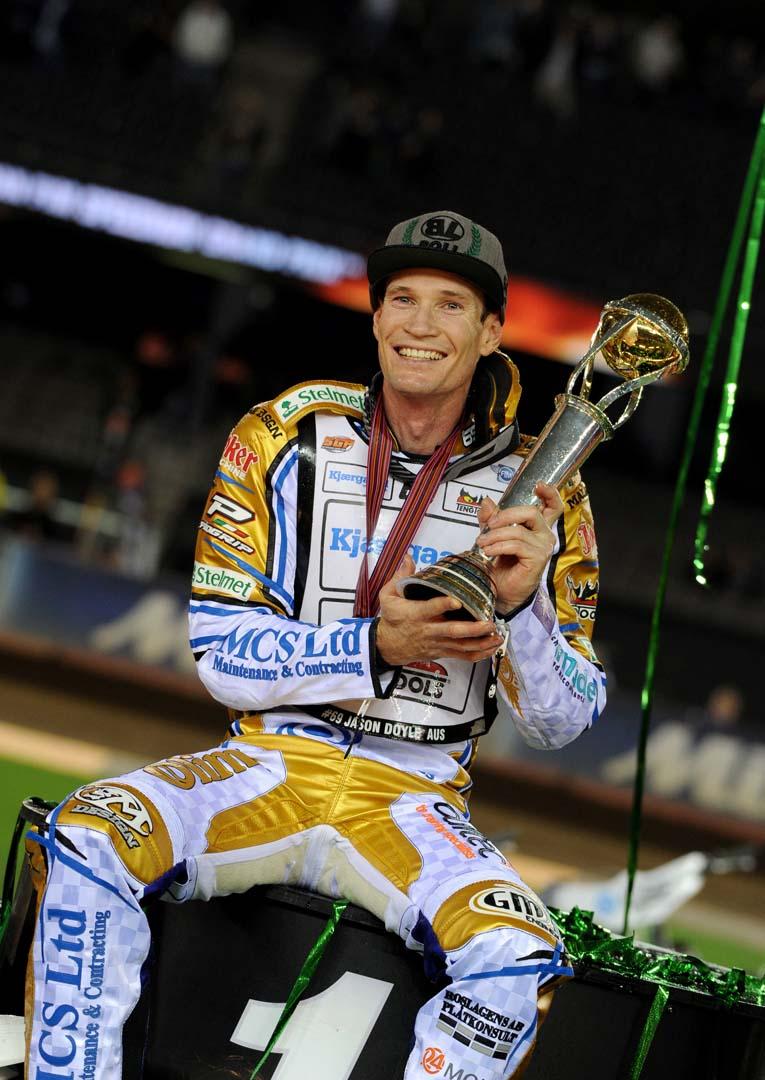 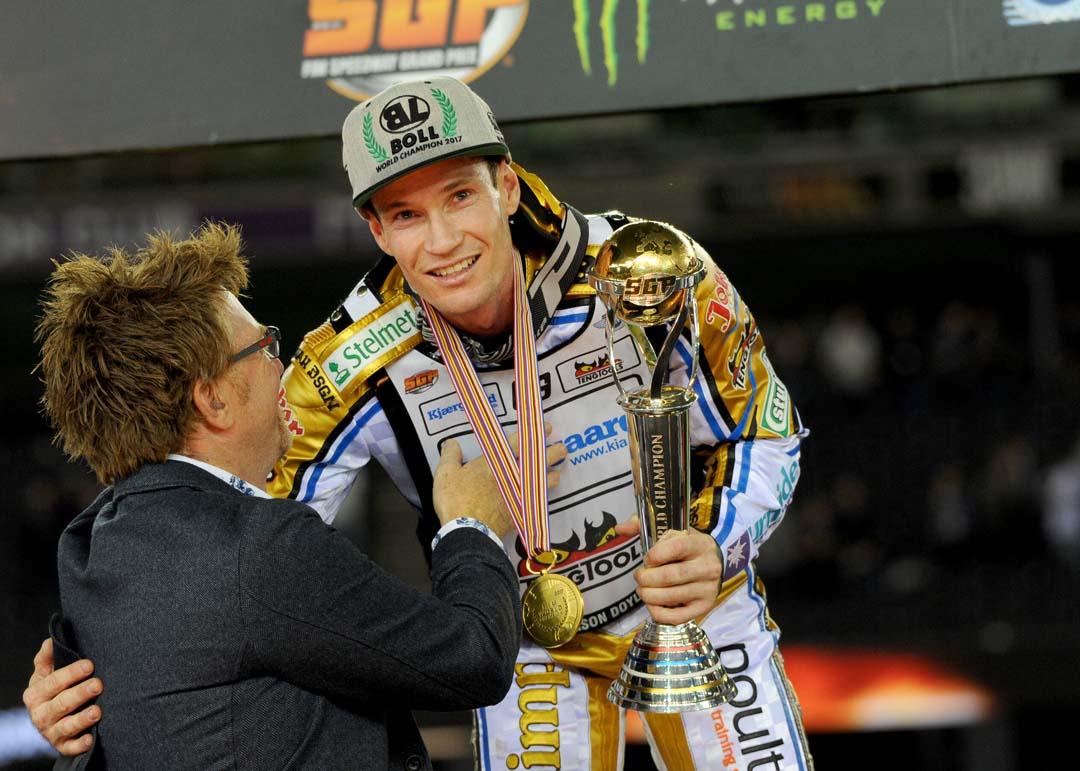 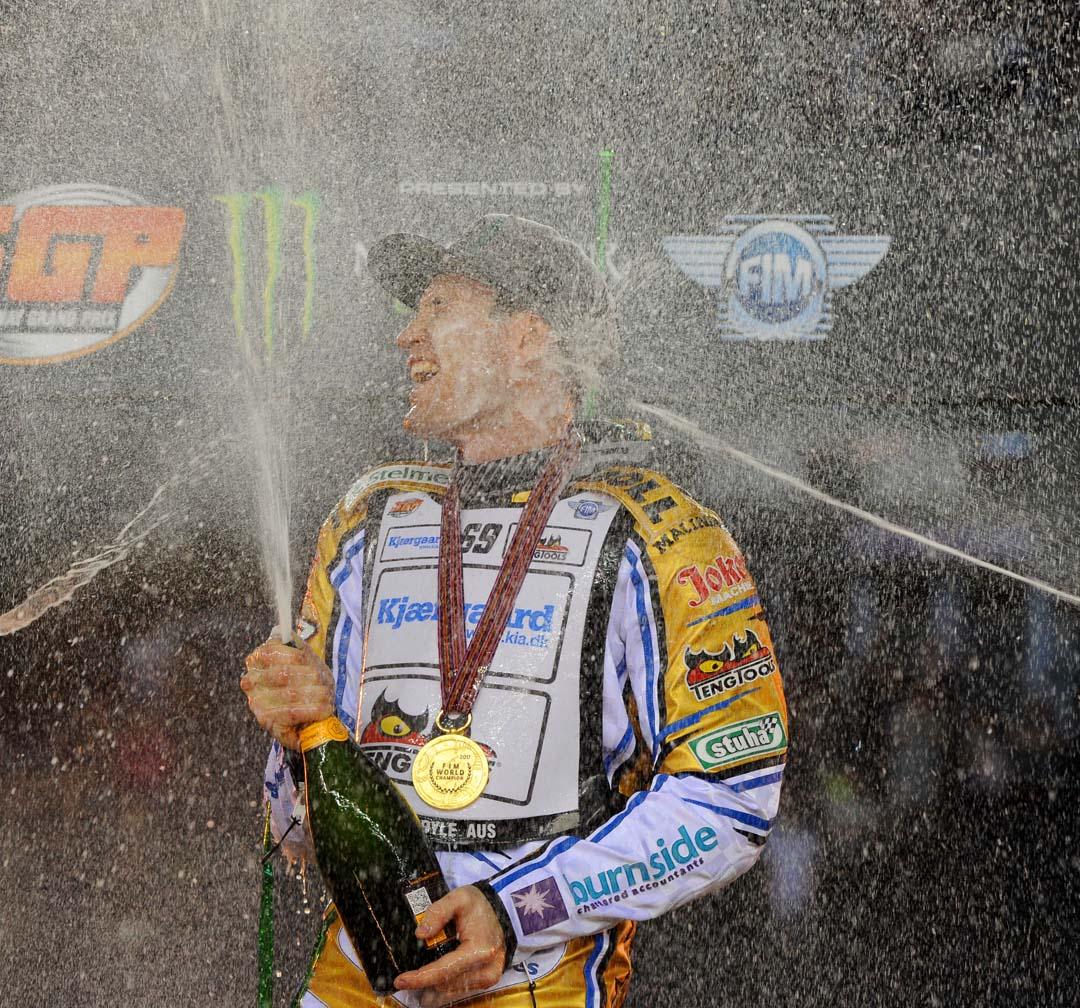 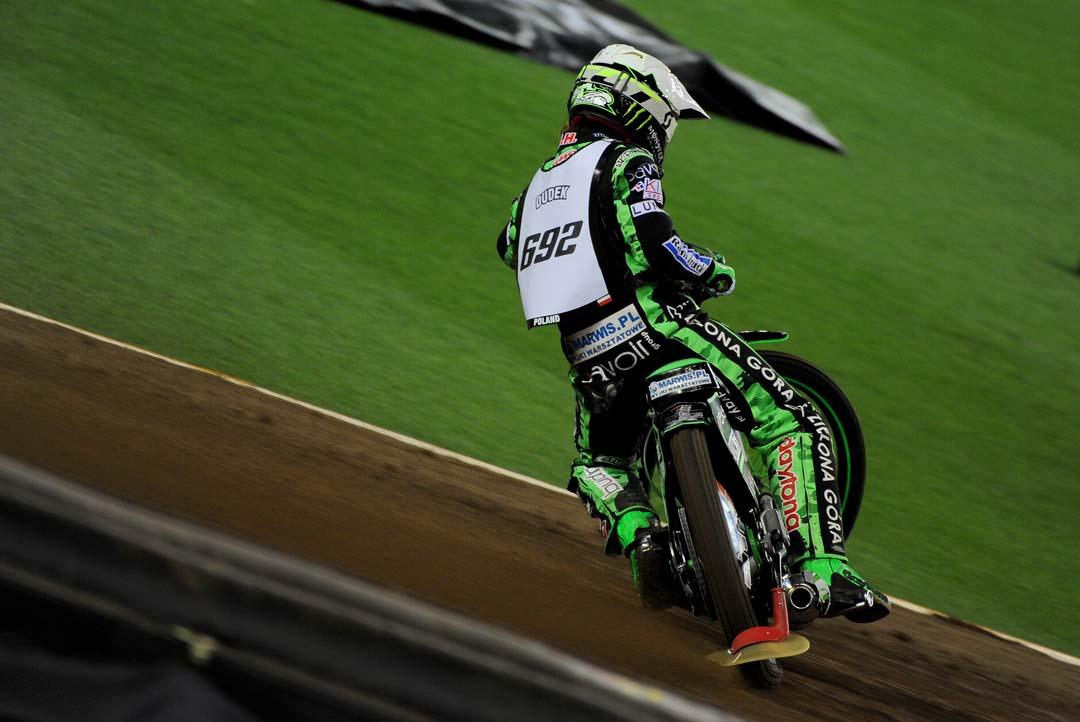 Doyle the Champ
“Last time I was in Melbourne, I was getting carted off in an ambulance,” Doyle commented after the final. “[But] I came back, defeated my demons and won the world title all in one night!”
Speaking to ABC radio a week after his victory, Doyle said that the stress of trying to secure the championship had taken its toll: “Losing [the championship] in Torun last year, it was very hard to deal with. Getting a dream taken away, through no fault of my own, was really hard for myself and my team.
“The last three months have been very tense – trying to ride safe, trying to score the points and trying to not take risks – just trying to make sure I could win the races that I needed to. It was a very difficult time. I couldn’t find a happy medium. I wasn’t enjoying [the sport].
“Leading up to the Grand Prix, [I] had many sleepless nights. There was quite a lot of things going through my head – ‘what ifs’ and ‘what may happen’. But when I won three straight in my first three heats and the world title was mine, it was a huge relief.”
In winning this year’s title, Doyle becomes the sixth Australian to be crowned Speedway World Champion and the first to do so on Australian soil. As this year’s champion, Doyle also guarantees a spot in the starting eight for the 2018 Speedway GP championship. Holder and Fricke are on the wildcard list.