Australia has a new motorcycling world champion, with Remy Gardner winning the 2021 FIM Moto2 World Championship. The 23-year-old wrapped up the title at the season finale in Valencia on 14 November. 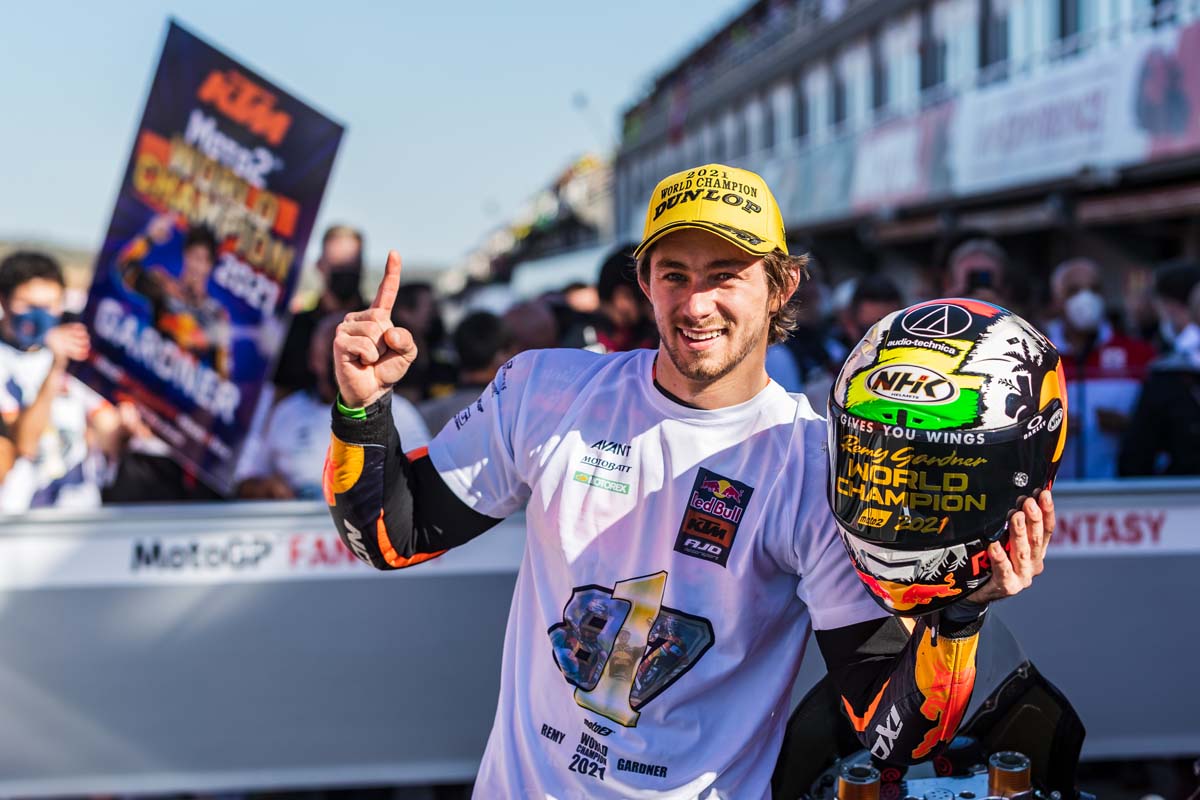 The eldest son of 1987 500cc World Champion Wayne Gardner, Remy came into the 2021 Moto2 season with a new team in Red Bull KTM Ajo, which has produced champions in the past.

Remy’s team mate at Red Bull KTM Ajo, Raul Fernandez, was making his Moto2 debut and would prove to be the Aussie’s closest rival for most of the season.

Consistent results had seen Remy build a healthy championship lead by the midpoint of the season, but Fernandez always threatened, closing the margin to just nine points with three rounds remaining.

A DNF from Fernandez at the third-from-last round and a win for Remy at the penultimate round eased the pressure, so the Aussie went into the finale with a 23-point advantage. That meant that, even if Fernandez won the race, Remy only needed to finish 13th or better to secure the championship. That’s close to how it played out, with Fernandez taking the win, while Remy rode safe to greet the chequered flag in tenth.

A Reward for Consistency

While Moto2 rookie Fernandez won more races – eight to Remy’s five – the Aussie was more consistent, with seven other podiums across the season.

“I’m lost for words. After so many years of suffering and so many points in my career where I thought ‘I’m not good enough, I’m not gonna make it’ we did it,” an ecstatic Remy said after securing the title.

“This is a dream come true and I want to thank everyone who believed in me when others didn’t. I still cannot believe this has happened. I am so grateful to be here.

"It's definitely been an intense season. It's been an incredible season. So many parc fermes and podiums, incredible moments with the team.”

Remy’s Moto2 world title came in his sixth year in the category, which included many fruitless and frustrating seasons.

“From 2015 to even 2019, they were really, really tough years for me and there were points in my career I honestly believed that was it, there was no more and that was the end of the road. Especially after injury for sure, fighting through that was incredibly difficult."

In winning the 2021 Moto2 World Championship, Remy becomes the first Aussie to claim a title in the Moto2 class and only the second in the intermediate GP category, following Kel Carruthers, who won a 250c World Championship with Benelli in 1969.

Now he’s a Moto2 World Champion, Remy’s next move is already locked in. Months before this year’s racing season was completed, Remy had secured a ride with Tech3 KTM Factory Racing in MotoGP for 2022, which means with Ducati Lenovo Team’s Jack Miller, there’ll be two Australians on the MotoGP grid next year.