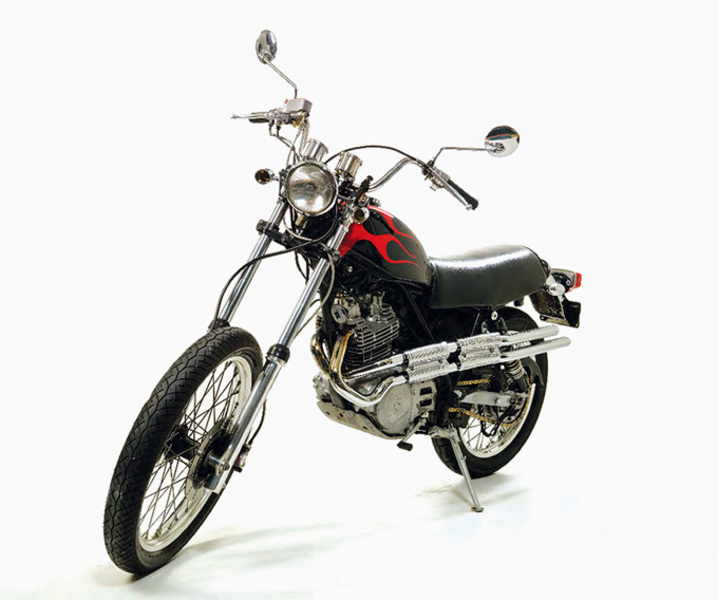 Us neither! But Sean Mamo does, and is such a big fan of the distinctive bobber-style bike used in the film, he decided to build his own replica. Like a lot of projects, it wasn't easy or cheap, but it was a lot of work and as it turns out, a lot of fun, too. Sean tells us how it all unfolded.

Seems like an odd choice for a project - and I suppose it is! - but for me, the 'Cool Rider' motorbike featured in Grease 2 is the epitome of 'cool'. It all started when I was 6 years old and saw Grease 2 for the first time. The original Grease, Fonzie, Brando and Dean came not long after, but Grease 2 was my first exposure to leather and motorcycles.

When I turned 18, the first thing I did was get my motorcycle licence. Summer was in the air and it was time to go shopping for a bike. My first was a 1969 Honda CL175 scrambler. After that came a 1965 Triumph Trophy 650, followed by an '02 Triumph TT600 and now - more than a decade later - this custom replica of the 'Cool Rider' bike from Grease 2, which I decided to create as a 30th birthday present to myself.

Research revealed the bike used by the 'Cool Rider' (aka 'Michael Carrington', the lead male character played by Maxwell Caulfield in Grease 2) was based on an old Honda CL305 Scrambler. However, these are scarce in Australia, so I focused instead on the stunt bike from the movie (which was used for a jump over a pool, police cars and other stunts), which was based on a Honda XL. Unfortunately, there wasn't much information on the internet regarding the XL, so the movie became my main research tool. That meant studying Grease 2 frame by frame in an effort to extract usable still images that would be vital in the quest to build my own version. These images proved to be invaluable in showing all the various people who assisted with this project the exact look I was after.

The first step in making this dream a reality came when I bought an '81 Honda XL. The bike was a one owner unit and in great condition, dark grey in colour, with drum brakes, a 23 inch front wheel and all the plastic trimmings.

Jeff from Ace Motorcycles in Heidelberg has worked on all of my motorcycles in the past, so I got him involved with the project right from the start. We started by taking off all the fairings, guards and tank, then sent them off what we were going to use to the paint shop to get modified and painted gloss black. The side covers were customized for a cleaner finish and to get rid of the dirt bike look. We also had to modify the air filter cover to allow the fitment of the scrambler-style exhaust as worn by the movie bike. The pipes exit on the offside on a factory XL, but on the Scrambler the exhaust system runs on the near side. That presented its own problems, but more on that later.

While parts were off being modified and painted, we changed the front forks over to Kawasaki units and installed a Kawasaki front disc brake. For the next few months my cycle lived at the Ace Motorcycles workshop, getting parts swapped over and customized to fit. Throughout this, the engine had a stubborn oil leak and proved to be painfully consistent for much of the build. 12 months later, we finally managed to cure it!

While Jeff and the crew at Ace Motorcycles did their thing, my next job was to source all the parts required to authentically match the look of the 'Cool Rider'. That meant every spare moment was spent tracking down a rear guard, lights, handlebar, tacho/speedo, as well as the exact tank and scrambler twin exhaust used on the movie bike. The tank was a tough one as the only close up of it in the movie showed it had a distinctive push button-style fuel cap centered on the tank. I assumed, but didn't know for sure, that the tank was a factory Honda unit, so I put it on the 'To Do' list and started looking for the specific scrambler twin exhaust instead. However, this proved to be just as tough - actually much more difficult than I expected. Eventually, the correct '60s-era exhaust pipes did turn up for sale in the USA, so I bought them and had them shipped over to Australia immediately.

When they arrived, I contacted Pedro at Prozac Choppers in Coburg and showed him the movie stills I had collated. Using these as a guide, Pedro set to and had the exhaust pipes re-chromed and modified to fit. It was at this point that we ran into some serious - and expensive - trouble, because the engine ports on the original '60s Honda were angled, whereas those on my '81 Honda XL were straight, thus proving difficult to get a good fit. It was a bit of a 'square-peg-in-a-round-hole' scenario that couldn't really be overcome with the pipes I'd bought, so off they came. The next best option - the only option, really - was for Prozac to build a copy of the original scrambler pipes from scratch. Already over a thousand dollars out of pocket, we had to get this right! So, once the build was almost done (prior to chroming), Pedro invited me over to have a final look at the pipes in place on the bike and give them the okay. Considering what they had to work with, Prozac did a great job, closely matching the length, curve and bends of the pipes on the movie bike. Looking at the photo, you can see just how many sections were required.

While Prozac finished the exhaust system, I put my efforts into finding the tank. Although Grease 2 was set in the '60s, the film was released in 1982, so the tank had to be at least pre-'82. I knew it wasn't an original Honda CL305 unit, but assumed it was off another Honda model, so I began searching online for images of '60s, '70s and early '80s Hondas. Three hours and 90 bikes later, found the tank I was looking for - from a '70s-era Honda scrambler. Now I just needed to find one for sale!

The tank was in poor condition and needed lots of work, inside and out. Ace brought the tank back to life, de-badged it and finished it off in the gloss black paint I wanted. In the movie, the tank is flamed (kind of like an '80s Harley Wide Glide), so the next step was to find a painter who could do great customized flames. Comparing the tank of the stunt bike with the one used for close ups, there was a difference, with the close up bike finished to a better standard.

Considering the level of detail I wanted, I chose Matt Egan of Extreme Designs to do the job. If you know Matt's work, you'll know why I sent the tank to him. It had to be perfect and exactly the same as the movie bike, so numerous photos were provided and Matt did a fantastic job!

By this stage, the bike was back at Ace Motorcycles, having the fork seals changed, as the wrong colour seals had been put on. I though black was a more suitable colour than pink!

New accessories, including a headlight, retro-style indicators, mirrors, handlebar and switch controls were put onto the bike. We also repositioned the pillion footpegs so passengers wouldn't come into contact with the re-routed exhaust. I sourced some new rear shocks and had them re-chromed for a better finish. The rear taillight, guard, bracket and light cover were sourced from three different bikes at what used to be called Global Motorcycle Wreckers. The rear rim was also chromed and refurbished there. To finish off the project and replicate that '60s look, the bike was sent off to have the frame modified. The rear end was lowered to keep a straight-line fit to suit the bike's classic profile.

There was a big list of contributors that helped with my 'gift', but special thanks must go to: Jeff at Ace Motorcycles; Pedro at Prozac Choppers; Matt from Extreme Designs; and the guys at Global Motorcycle Wreckers.

Sourcing the parts and making this childhood dream a reality was more than just a birthday present to me. I was living the dream and I got to do it for two years. Would I do it again? Absolutely! I'm already thinking about doing a second one. Why not? 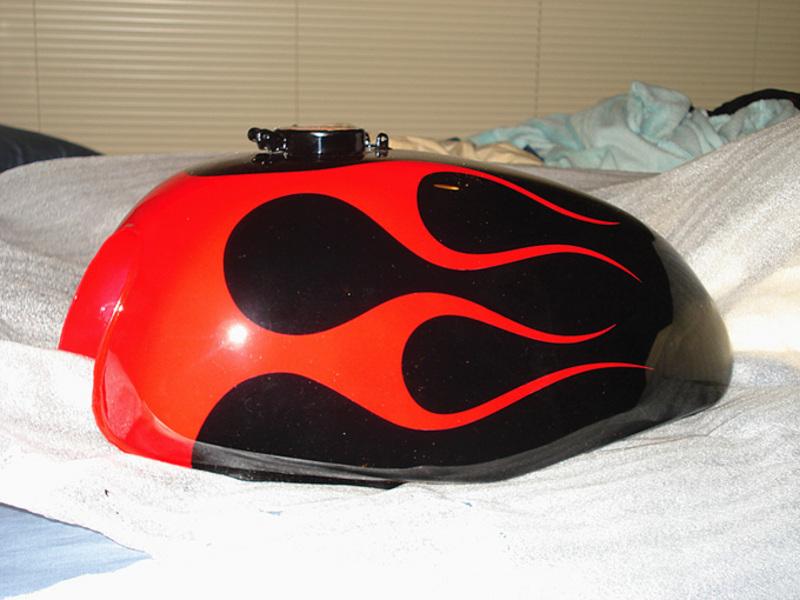 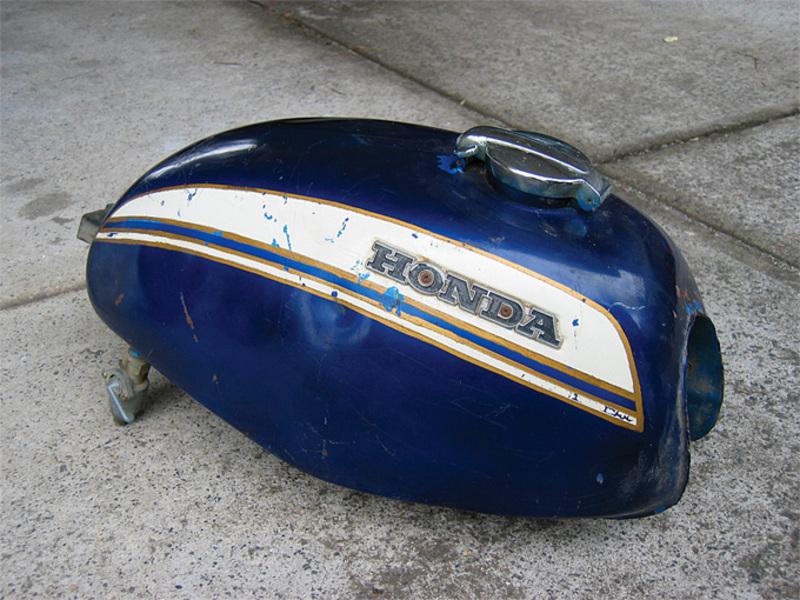 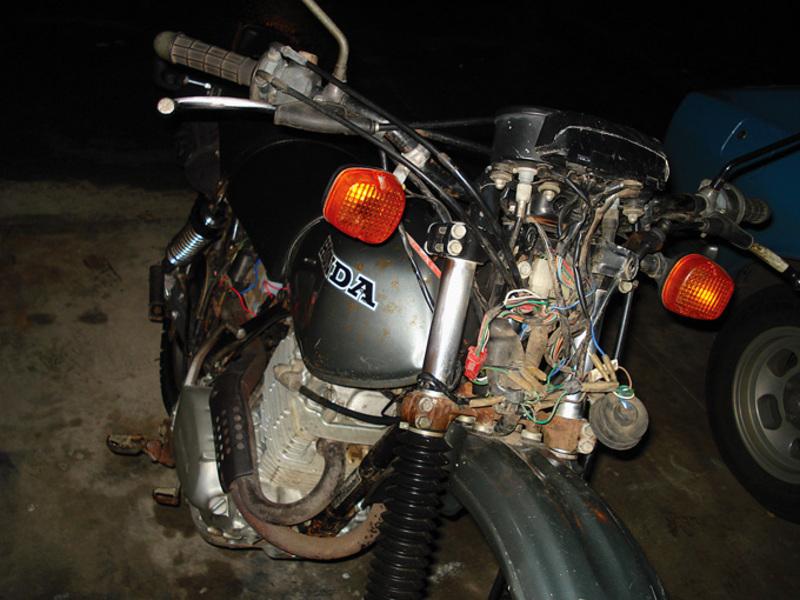