For the 2022 version of their XSR700 retro twin, Yamaha have taken the livery from one of their most iconic models

If you’re of a certain age, Yamaha’s RD 350LC needs no introduction. Released in 1980 in both 250ccand 350cc form, the RD 350LC may have looked like a vanilla commuter, but its peppy two-stroke parallel twin engine and race-developed componentry meant it was virtually a TZ350 GP bike with lights and indicators. That made it a winner not only on the road with wannabe racers, but with actual racers in proddie class championships around the world. 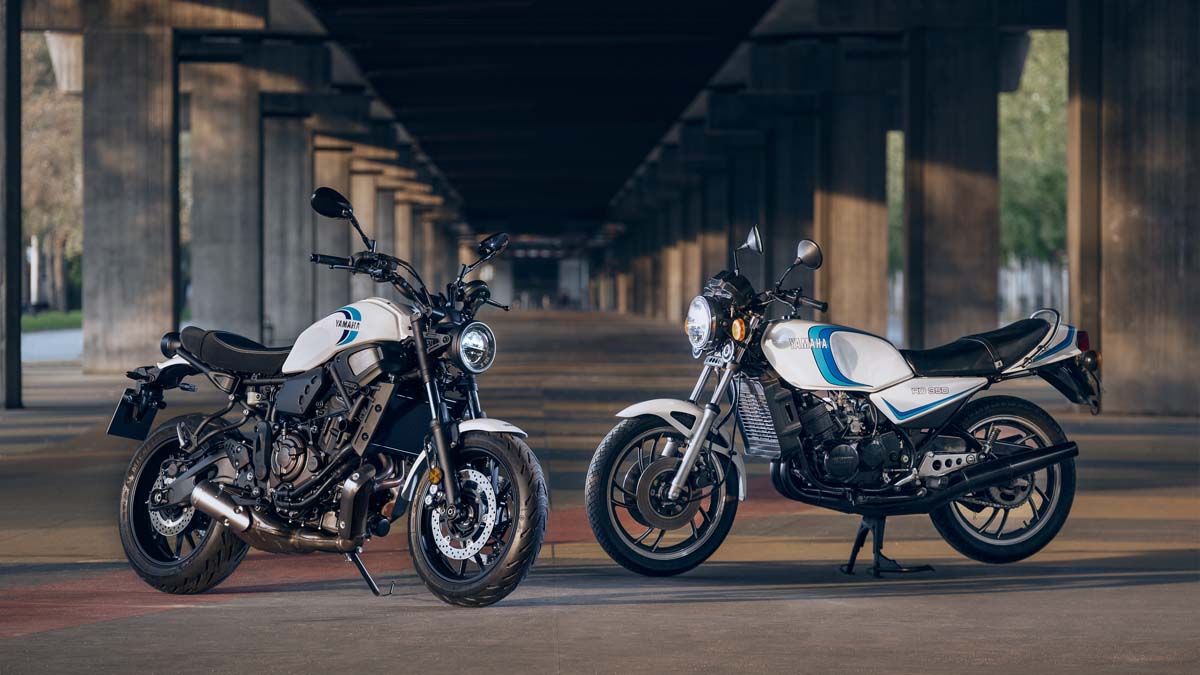 Superseded by the YPVS variant in 1983 (aka the RZ350) and discontinued a year later, the RD 350LC continued to be the bike of choice for the eager young motorcyclist for most of the decade.

Now, almost 40 years since it last graced a Yamaha showroom as a new bike, the LC is coming back – sort of. 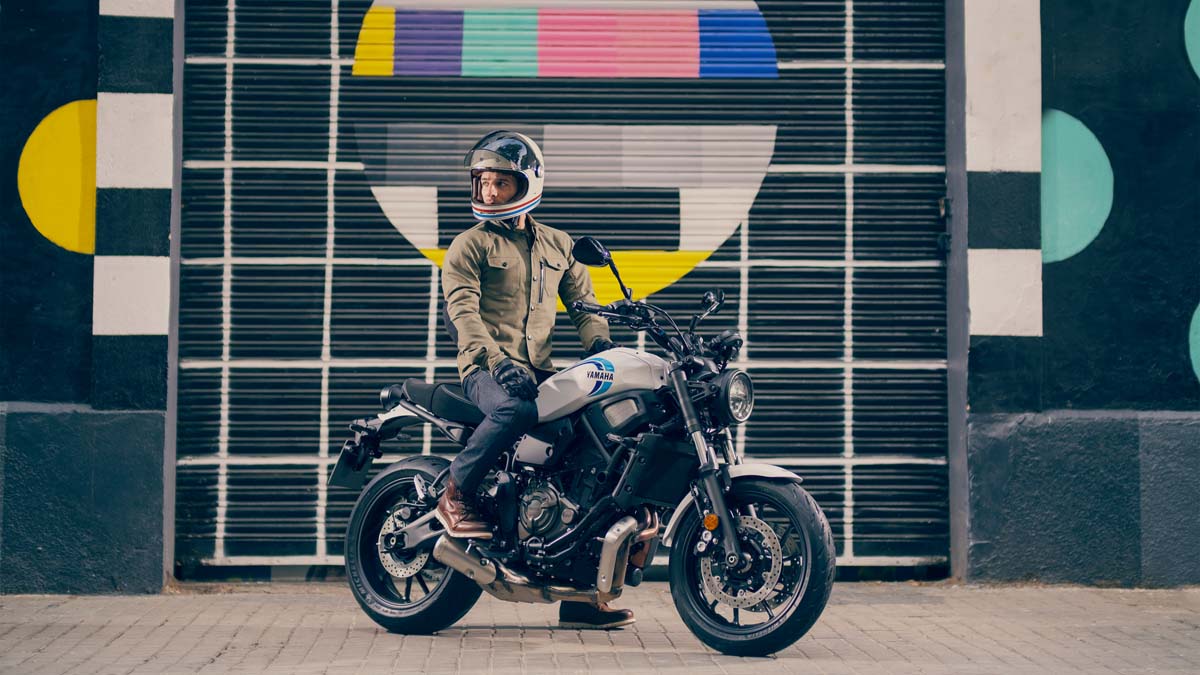 No, Yamaha aren’t releasing a two-stroke road bike, but they have reimagined the RD 350LC livery for the 2022 version of their XSR700 Sport Heritage twin.

With the discontinuation of the Sportster-eque Bolt C-Spec cruiser from Yamaha’s local lineup (after eight years on the market), the Sport Heritage family is now looking a little thin, with just the XSR900 and unkillable XV250 Virago joining the XSR700 for 2022, so the refresh of the XSR700 and a major makeover of the XSR900 is timely.

New Looks – and a new light

There are a few design tweaks here and there, like black brake and clutch levers, black plastic shrouds on the fork uppers, a heatshield on the exhaust headers and new slimline indicators front and rear. The front indicators (which like the rears, are LED) have been repositioned from the fork uppers to the radiator shrouds and those shrouds have been redesigned, too.

Carryover styling features include the handlebars and mirrors, mudguards, side plastics, engine covers, seat and the retro-look round LED tail light. The headlight is new, though, and shared with the XSR900.

The redesigned LED headlight is part of a revised control centre layout that integrates the headlight into the instruments more effectively while visually reducing some of the cable clutter.

The other change of note is an update of the dual front brake discs from 282mm to 298mm. These are also now a conventional round shape instead of the wave pattern used previously. The rear disc is now round, too, but there’s no change to its 245mm diameter. The calipers front and rear appear to be unchanged from the 2020-21 version and ABS should carry over, too, but as the full specs for the 2022 XSR700 have yet to be revealed, this is speculation. 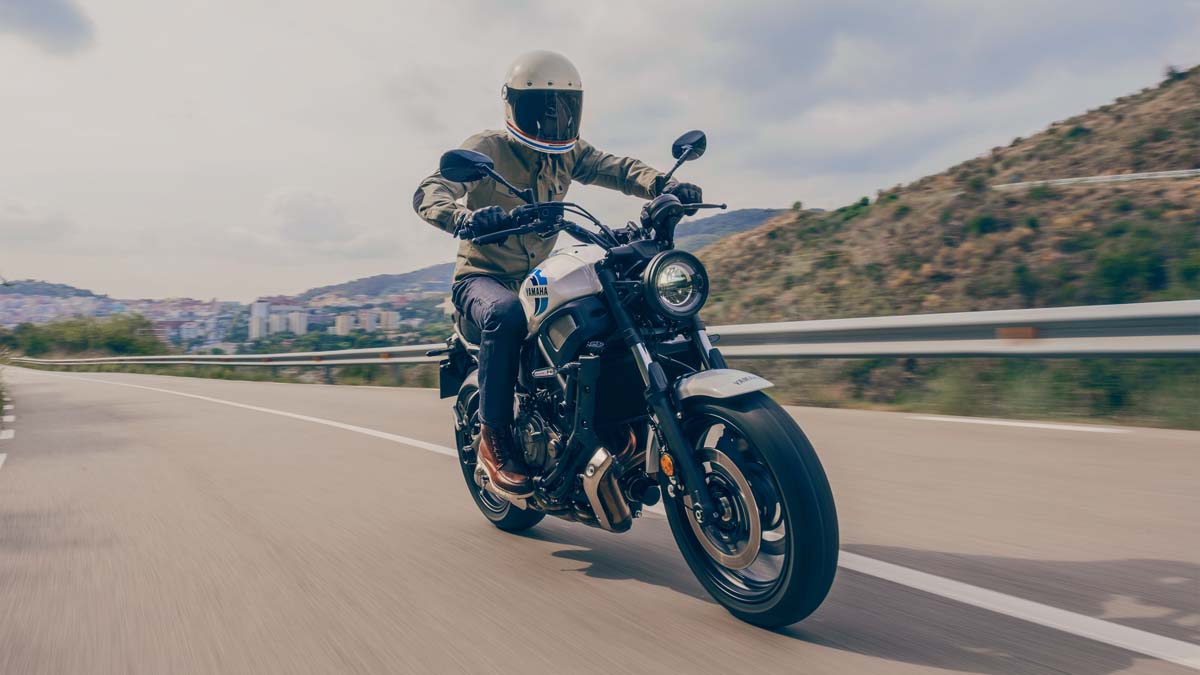 The 2022 XSR700 will retain its LAMS legality, as there is no change to the engine capacity or output. Using the same 655cc parallel twin with the 270-degree ‘crossplane’ crank as the MT-07LA, this engine delivers strong acceleration and meaty amounts of torque.

There’s no word on changes to the six-speed transmission, the clutch or the steel diamond frame. While the XSR900 frame has been updated for the new year, the XSR700 appears to be running the same frame as the 2020-21 version. 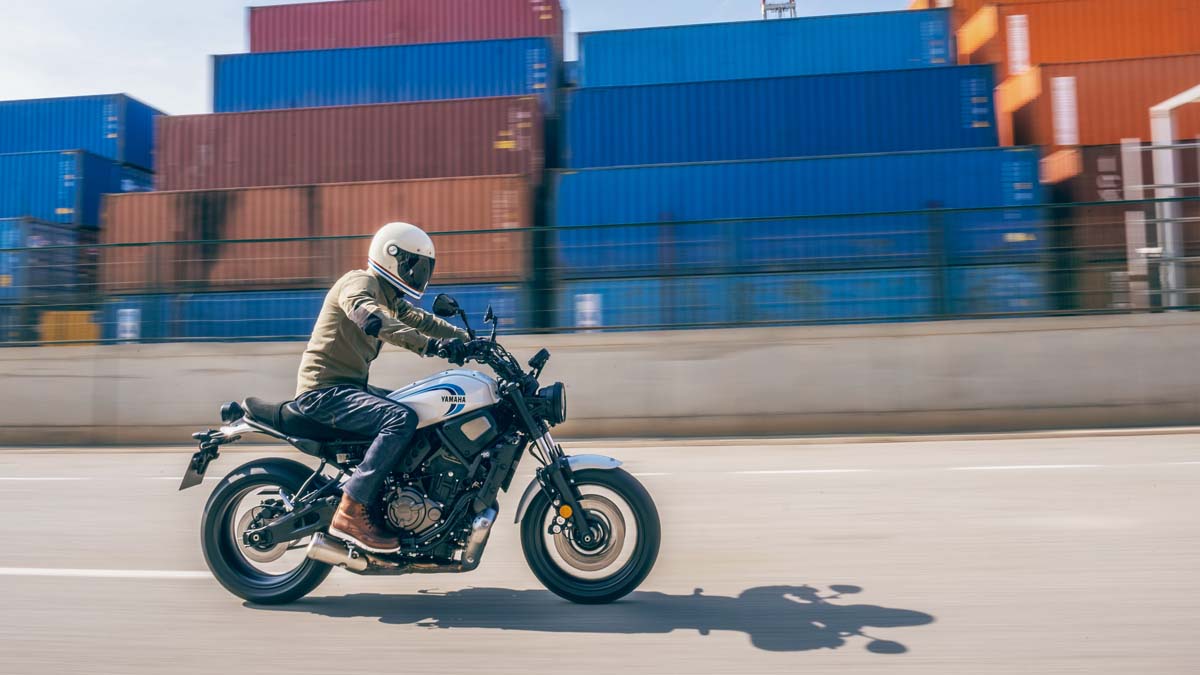 Suspension appears to be unchanged, too, which means a 41mm tele fork front and monoshock rear, with 130mm travel at each end, but no adjustability. That rear suspension is the link-type, which combined with the short swingarm, enhances the connected feeling between rider and bike, according to Yamaha. 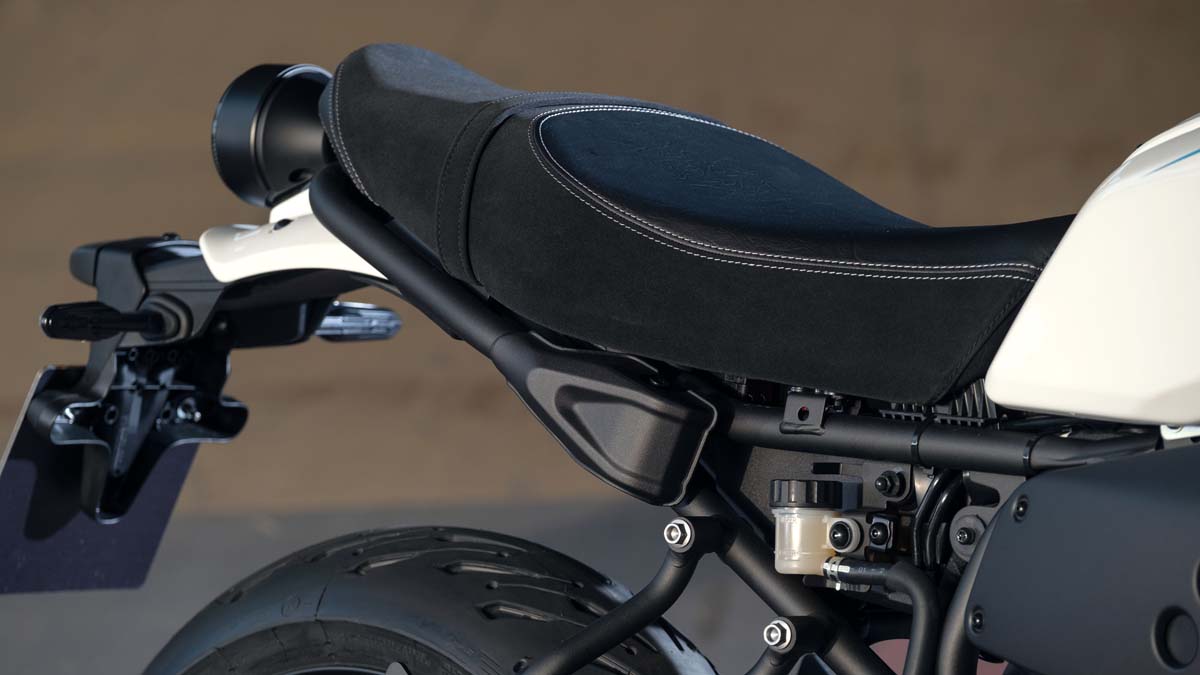 Wet weight should also be unchanged at 186kg, which is reasonable for a LAMS bike but 2kg more than the MT-07LA. And based on the images presented so far, fuel capacity is likely to be the same 14 litres as the current version.

As part of that rearrangement of the controls to suit the new headlight, the LCD instrument display for the 2022 XSR700 has been moved forward of the ignition switch; something it probably should have done earlier. While it’s a little further away, it’s (arguably) more visible in this position as you don’t have to shift your vision as far to read the gauge information.

The repositioning may also explain the move from the dated black on white LCD graphics to white on black. Although the colours have changed, the actual display information hasn’t, so there are large indicators for the speed and gear position, with the revcounter running around the outer rim of the circular display and smaller representations for the odometer, tripmeters, fuel gauge, clock and other data. 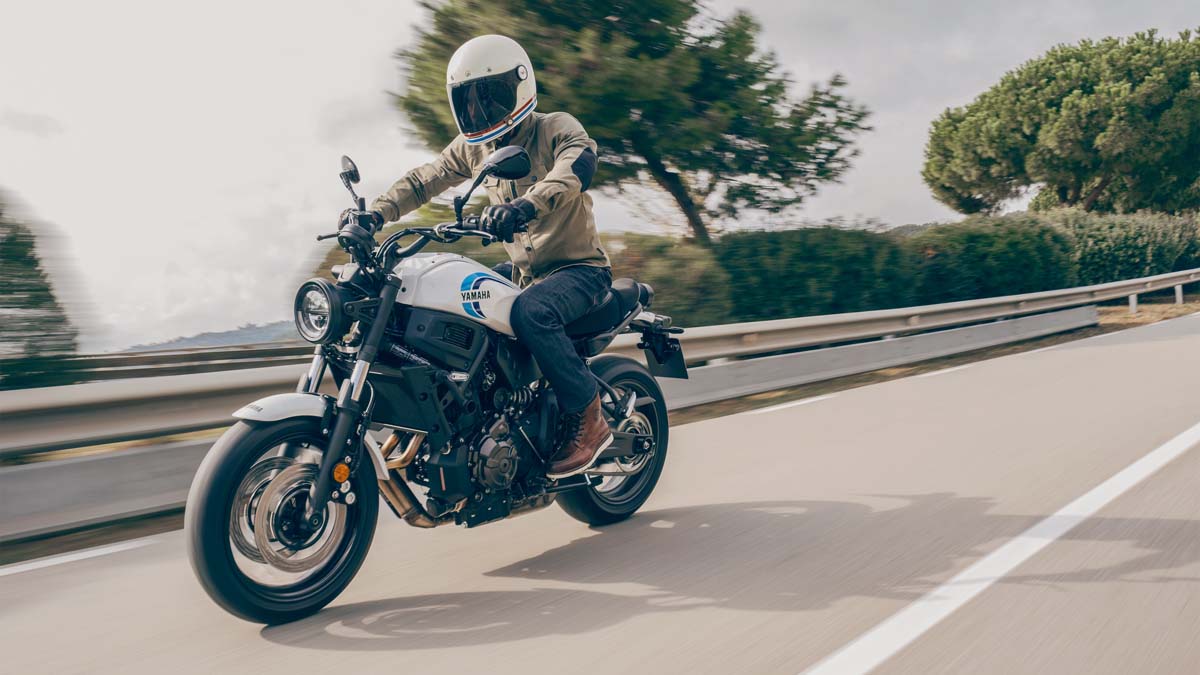 Outside of this are the usual array of warning lights for neutral, engine temp, indicators and so on, but these are blacked out when not active.

The XSR700, and indeed the Sport Heritage range generally, have been outshone by the MT range for a few years now, so upping the retro ante with the RD 350LC-inspired paint is a smart move on Yamaha’s part.

For those that remember the LC when it was new, the colour scheme may sway them if they're returning to riding after a long absence, while younger newcomers to motorcycling will probably just appreciate the XSR700’s cool looks without knowing its history.

Either way, after two years of COVID-19 interruptions, this new-look version of Yamaha’s LAMS Sport Heritage roadster should attract new interest when it does get here.

A local release date and local pricing for the 2022 Yamaha XSR700 had yet to be confirmed at time of writing, but with only minimal changes, expect it to come in at around $13,000 ride away and reach local dealerships before the middle of the year.