To mark 60 years since their debut in grand prix competition, Yamaha have created a series of special sportsbikes paying tribute to that rich heritage.

Yamaha’s ‘speed block’ livery is one of the most iconic colour schemes in motorcycling – up there with the red and green of Ducati’s Mike Hailwood replica, Honda’s CBR900R ‘Urban Tiger’ Fireblade and the Repsol Honda livery that’s been connected to so many grand prix world champions in recent years.

While Yamaha’s speed block livery dates to the late 1970s, the Japanese brand’s history in grand prix racing goes back much further – all the way to 1961. 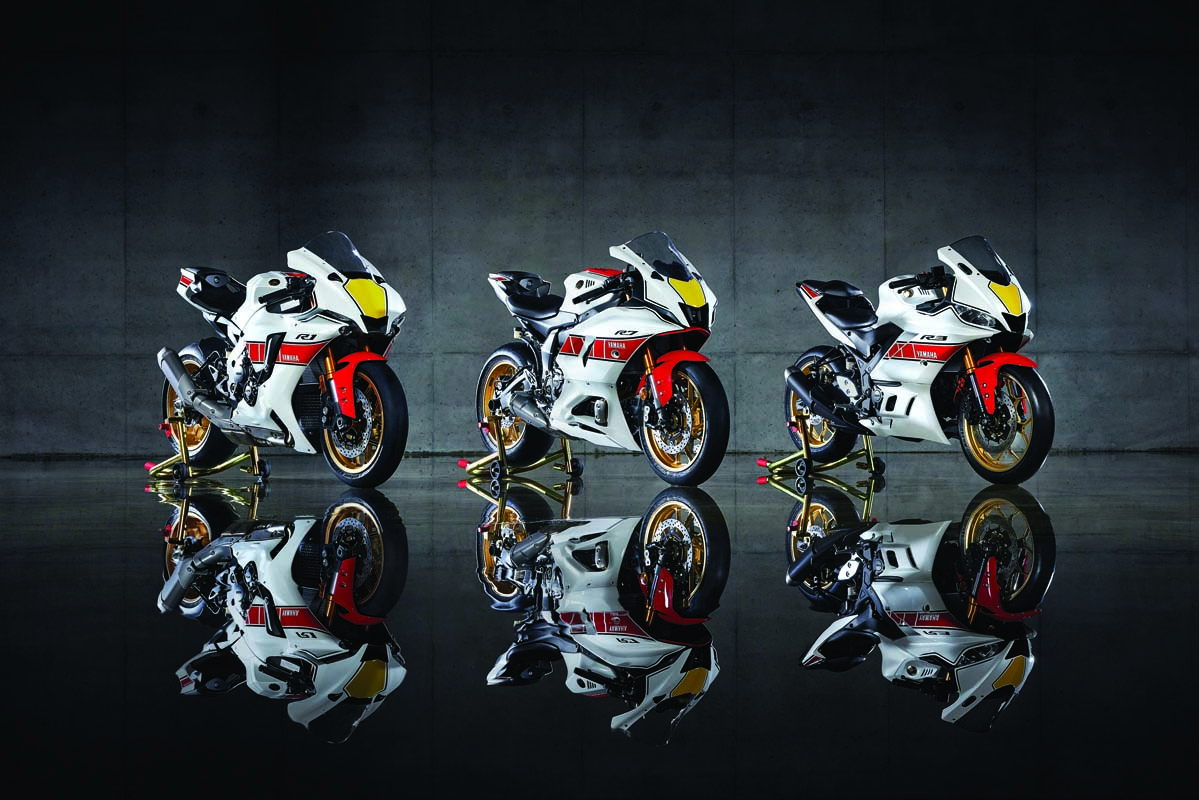 Sixty years is a milestone worth celebrating anywhere, but even moreso in Japan, as Japanese culture places great importance on a 60th birthday.

Known as ‘Kanreki’ and with origins in the Chinese zodiac calendar, a 60th birthday is regarded as a time of rebirth and is as important in Japanese culture as a 21st birthday is in western cultures.

So, with this year marking the 60th Anniversary of Yamaha’s motorcycle grand prix debut, it was a natural decision to celebrate the occasion.

Those celebrations started in March, when Yamaha presented a special ‘WGP’ (World GP) Anniversary livery on their YZR-M1 for the Official MotoGP Qatar Test. Finished in white with red speed block patterning on the fairing, as well as black on yellow race numbers, the WGP Anniversary livery really stood out.

Yamaha extended the look to the helmet and leathers of their test rider Cal Crutchlow, with the Yamaha technical team at Qatar all kitted out in shirts with speed block graphics, too.

While we’ve yet to see the speed blocks make an appearance at a MotoGP round this year (most likely due to commercial and sponsor reasons), Yamaha’s factory and satellite teams in World Superbike and World Supersport competition were decked out head to foot in red-on-white speed blocks for the Catalunya WSBK round in September, which coincided with the official announcement that limited-edition ‘WGP 60th Anniversary Edition’ versions of the YZF-R3, all-new YZF-R7 and YZF-R1 road bikes will be released to the public.

For Yamaha, the WGP Anniversary sportsbikes are not only a Kanreki in mechanical form; they pay tribute to the roster of champions who have ridden Yamahas to grand prix victory in the past – names like Bill Ivy, Giacomo Agostini, Phil Read, Kenny Roberts and Wayne Rainey, to name a few.

Running their ‘RD48’ two-stroke inline twin in the 250cc class (as well as an ‘RA41’ single-cylinder 125cc two-stroke machine), Yamaha’s first start was in Round 3 of the 11-round 1961 season, held at Clermont-Ferrand in France.

While they were rookies at that year’s French GP, Yamaha weren’t complete novices when it came to racing, having campaigned their products domestically since the mid-1950s, soon after the motorcycle side of the business was founded.

The factory Yamaha squad went winless on their 1961 debut, but they did accrue a handful of top-six finishes in the 250 class. Ito was the top performer, with a fourth place at Buenos Aires his best result. 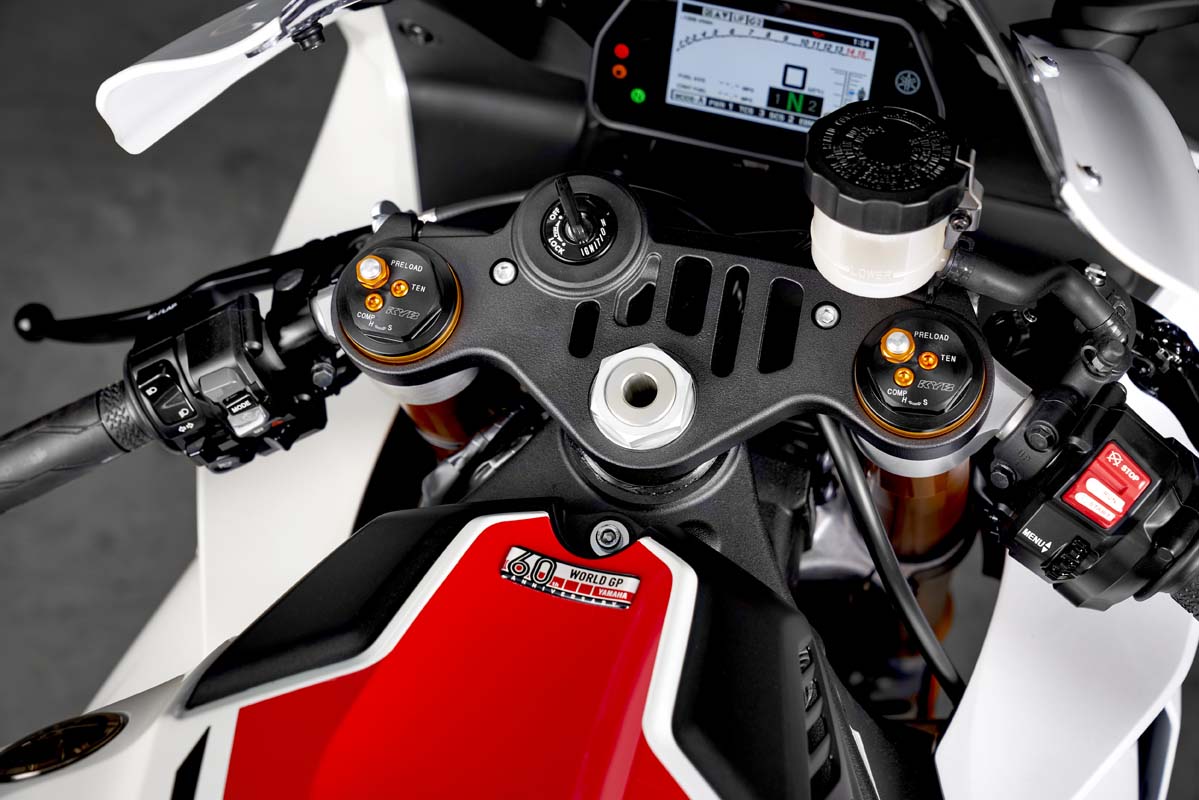 Mike Hailwood was 250cc World Champion that year, leading Honda’s domination of the category that saw the top five positions - including Australia’s Tom Phillis in second overall - all go to riders on Honda machinery. Phillis would win the 125cc World Championship for Honda in 1961, with Honda also taking out the constructors’ championships in both categories.

The lack of success in their grand prix debut year saw Yamaha sit out the 1962 GP season, focussing instead on domestic racing. Returning in 1963 with the RD56 250cc two-stroke twin, Yamaha would take their first podium, a runner-up finish at the Isle of Man TT, followed by their first grand prix race win at Spa two rounds later. Ito made the breakthrough on both occasions, while at Spa, Sunako made it a Yamaha 1-2.

Ito finished the 250cc championship third overall in 1963, with Yamaha in the same position in the constructors’ championship.

In 1964, Phil Read and Mike Duff joined Yamaha’s 250cc campaign, with Read also running in the 125cc class. It was also in 1964 that the forerunner of what became the ‘speed block’ livery first appeared. 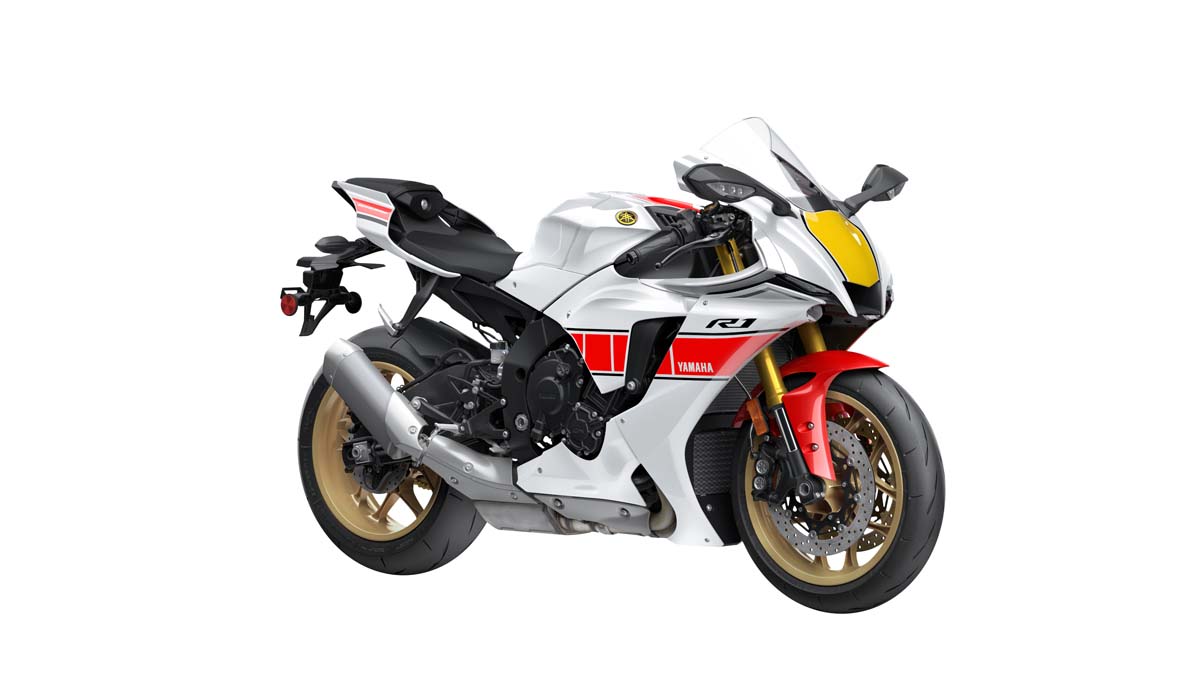 Yamaha’s factory entries that year were finished in white with a red stripe through the midsection that curled around the fairing and also adorned the front mudguard. White and red soon became a recognized Yamaha colour that later extended to the brand’s factory motocross entries.

Read wrapped up Yamaha’s first riders’ championship in 1964, with five wins in the 11-round series, while a single win from Duff was enough for Yamaha to take the 250cc Constructors’ World Championship as well. The icing on the cake that year was the first points for Yamaha in the 125cc class with the RA97 two-stroke twin, which replaced previous single-cylinder machines. 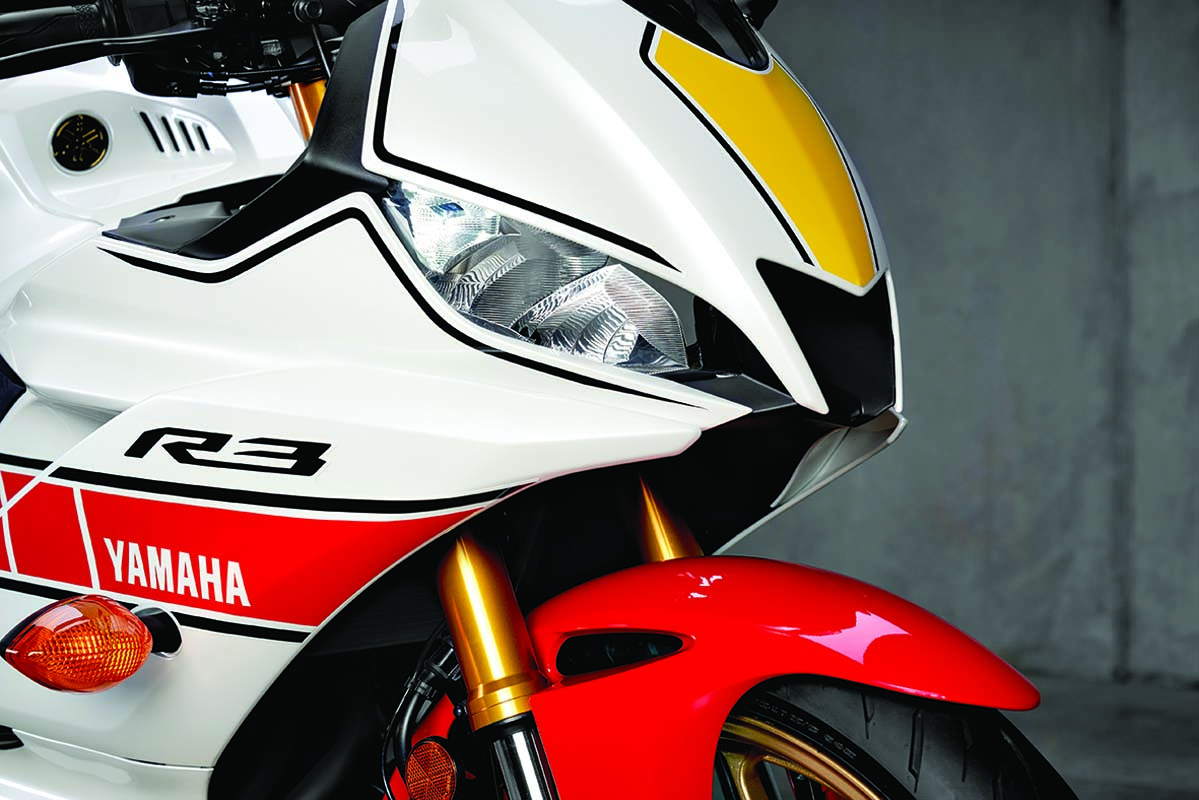 Read would win the 250cc World Championship again in 1965, with Duff second and Yamaha going back-to-back in the constructors’ title. Yamaha’s first 125cc championship came in 1967, by which time they were an established force in grand prix competition.

Yamaha joined the 500cc category in a factory capacity in 1973 with their YZR500 two-stroke and would take that championship two years later with Giacomo Agostini. That first premier class title was followed by more from the likes of Kenny Roberts, Wayne Rainey and Eddie Lawson. 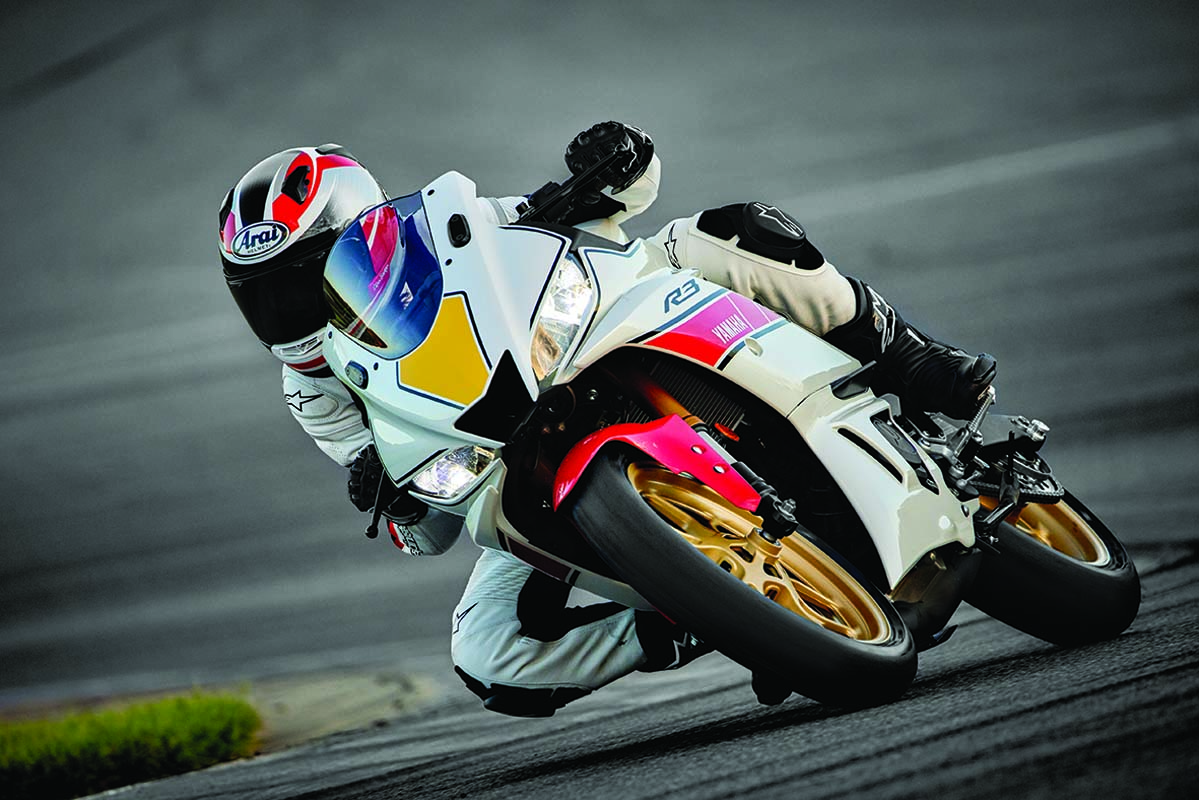 It’s worth noting that an alternative version of the speed block livery evolved in the US - black blocks on a yellow background - that’s become just as popular (arguably even moreso) as the red-on-white version.

From Rainey (World Champion three years running from 1990) and Lawson (World Champ with Yamaha on four occasions), the Yamaha baton was passed to the likes of Jon Kocinski and Luca Cadalora, then Norick Abe and Max Biaggi, but Honda dominated the 500cc category in the 1990s and early 2000s. It wouldn’t be until 2004 that a Yamaha rider won the championship again. That rider, of course, was Valentino Rossi, who would win three more world titles with Yamaha. Jorge Lorenzo then added to Yamaha’s tally. 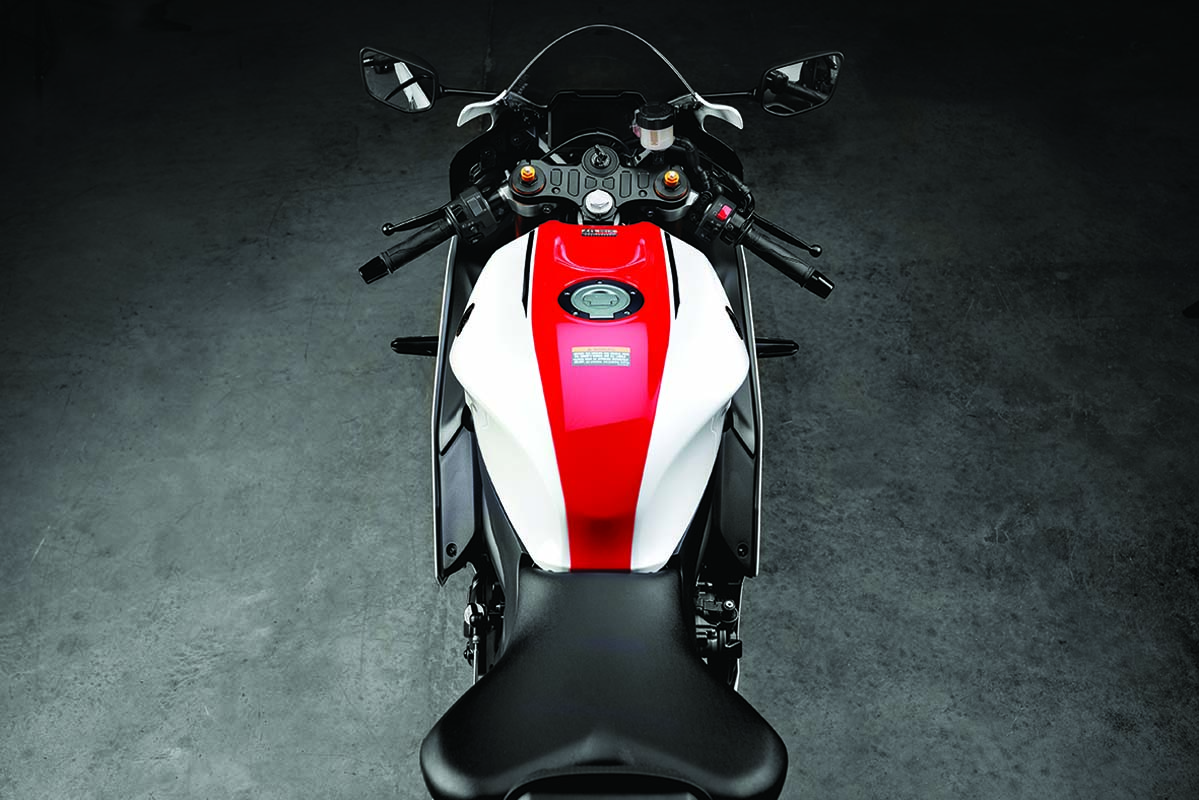 At time of writing, Yamaha has achieved 517 race wins and a combined 82 riders’, constructors’ and teams’ championships in grand prix competition. Now, Monster Energy Yamaha MotoGP’s Fabio Quartararo looks set to add to that total, on the verge of winning this year’s MotoGP World Championship. If he does, it’ll be Yamaha’s first premier class title since Jorge Lorenzo in 2015.

To celebrate 60 years of grand prix competition, the WGP Anniversary Edition bikes look back to Yamaha’s halcyon days in the 1970s and early ’80s, when the likes of Agostini, Johnny Cecotto, Jarno Saarinen, Roberts and Lawson raced – and won – on the red and white machines. 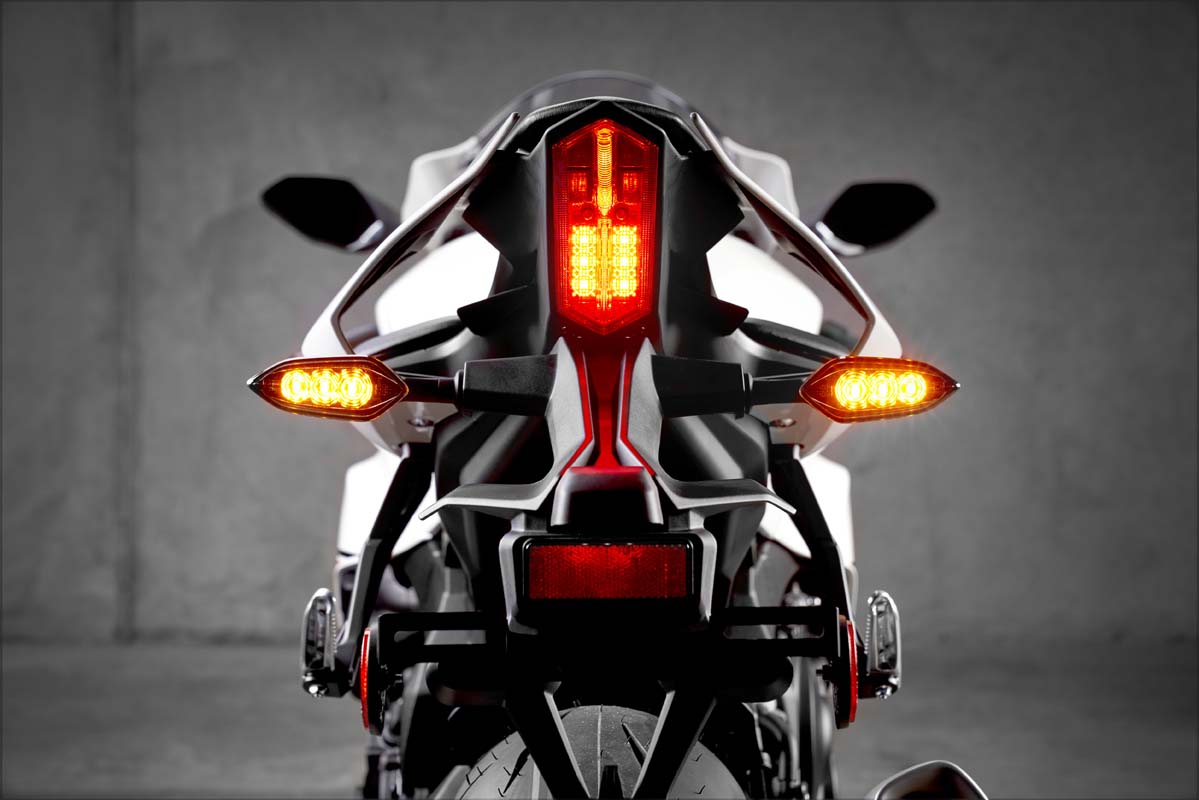 Applied to the 2022 YZF-R1, YZF-R7 (LA and HO) and YZF-R3, the WGP Anniversary Edition livery takes specific inspiration from Yamaha’s 1980 YZR 500 two-stroke race bike, which was an evolution of the original from 1973 and would remain the primary GP weapon for Yamaha throughout the 1980s. The 1980 model was also amongst the last to run with a purely “factory” livery, before sponsor signage, logos and colours came to dominate race bike liveries later that decade. 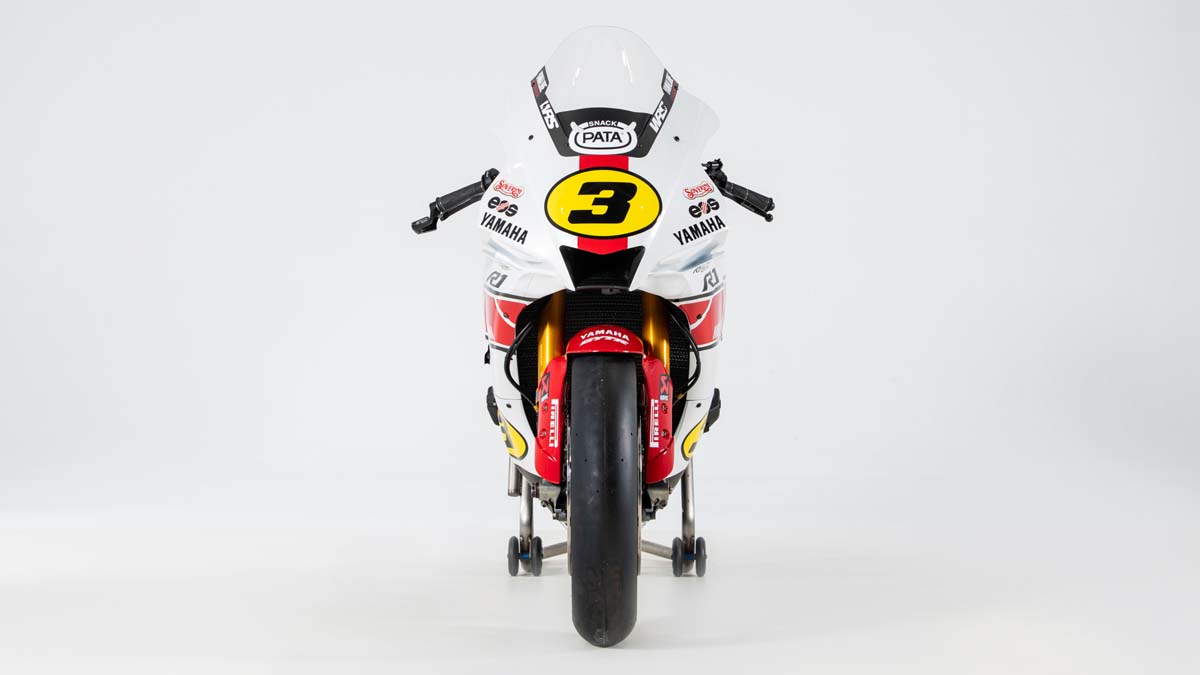 As applied to the limited-edition tribute bikes, the 1980-inspired red speed blocks run through the midsection of the fairing and there’s a red front mudguard applied across the three-model lineup.

Depending on the model, there’s also a red stripe on the tank and tail section, with subtle ‘World GP 60th Anniversary’ identification on the latter.

Common to all is a yellow section at the front of the fairing and gold anodised wheels. Both these elements are taken from the 1980 YZR500. Black brake and clutch levers, black mirrors and gold forks are also common across the range. 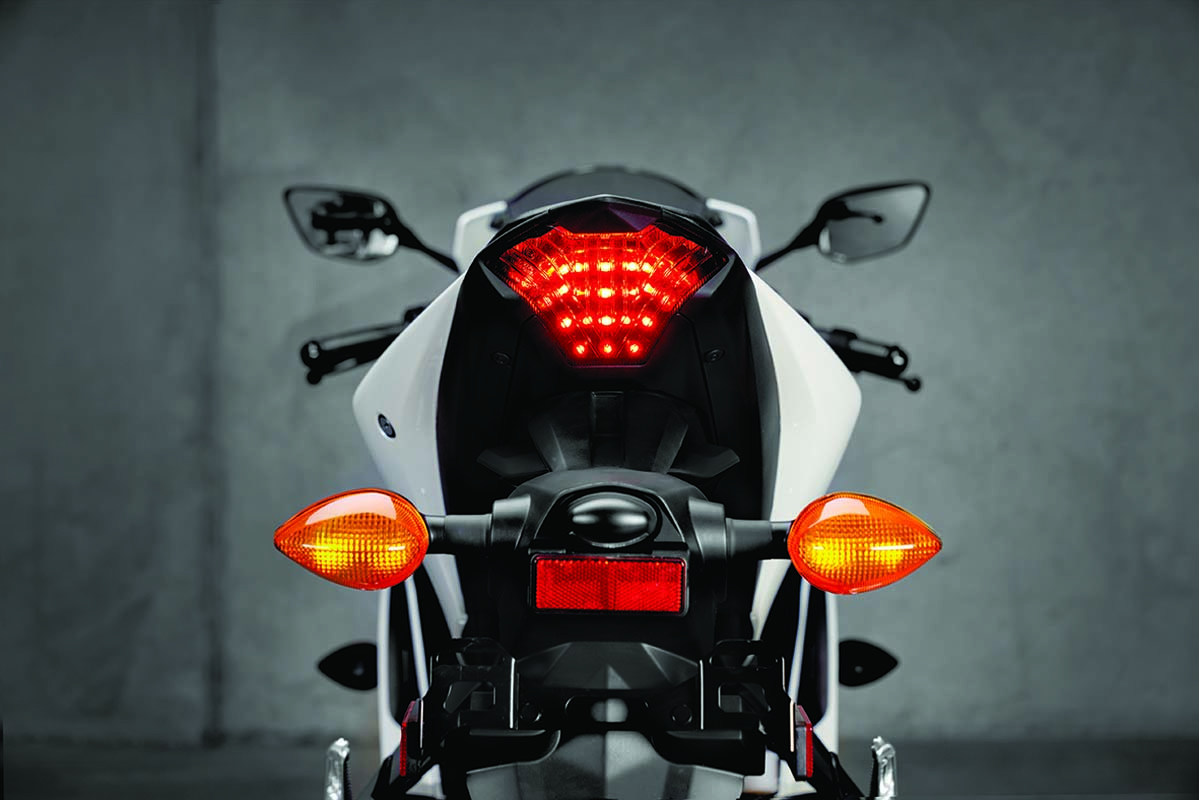 The finishing touch is a pair of gold Yamaha tuning fork logos on the fuel tank.

Mechanically, all the WGP Anniversary bikes are unchanged from the R-Series models they’re based on, so there’s no boost in performance, nor bespoke extras beyond the cosmetic changes already mentioned.

While celebrating a 2021 milestone, most of the R-Series WGP Anniversary bikes won’t reach Australia until 2022.

The LAMS-approved (LA) version of the new YZF-R7 will be first to reach our shores, arriving in December, followed by the YZF-R1 in January and the YZF-R3 in April. According to Yamaha Motor Australia, we have to wait more than a year for the full-power YZF-R7 HO WGP, which is due for local release in December, 2022. 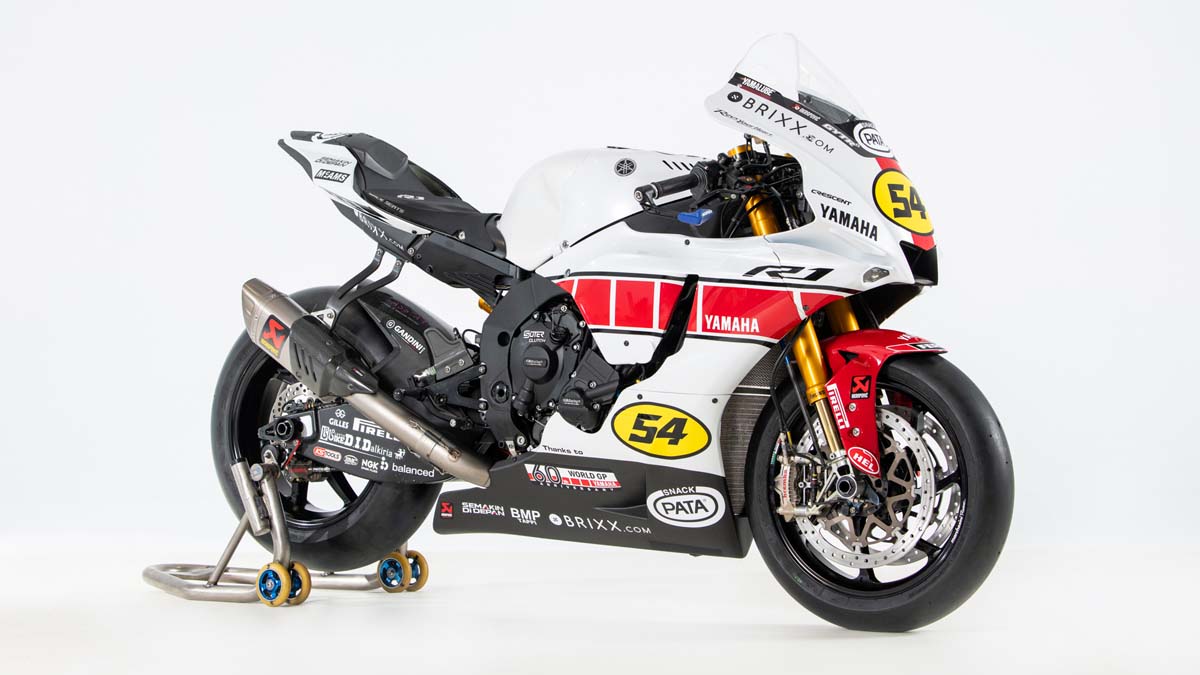 All bar the YZF-R3 have prices confirmed at time of writing. Given their limited-edition status, all units allocated for Australia are expected to sell-out quickly, so see your Yamaha dealer for more details and to confirm availability.

*listed pricing is ride away, including GST 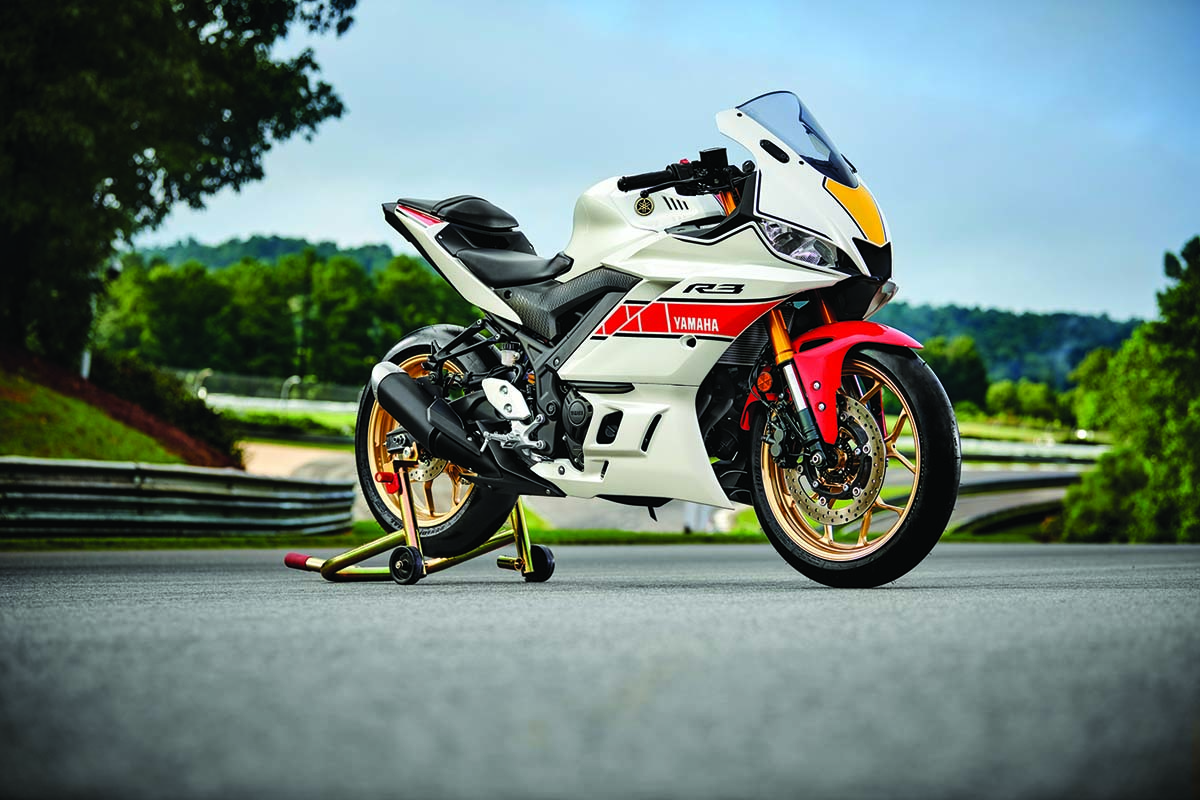 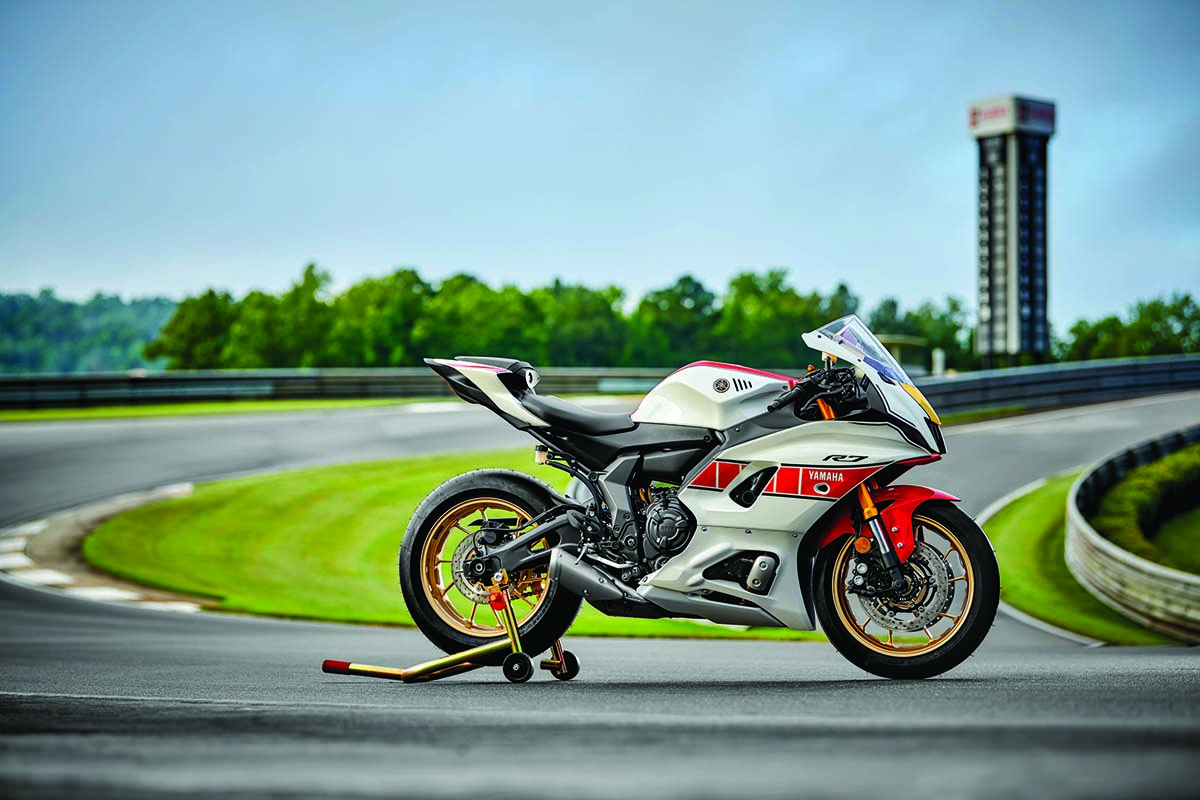 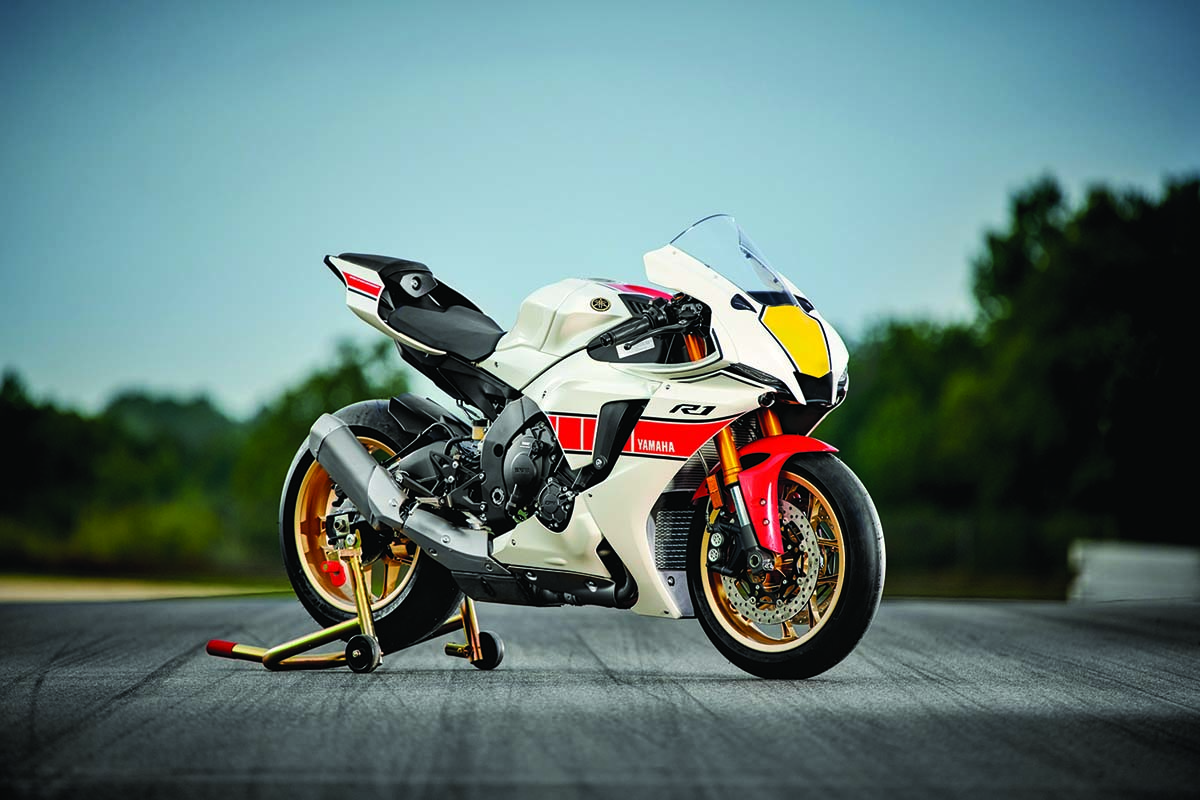