Suzuki have presented details of their updated GSX-S1000, ahead of its Australian release in the first quarter of 2022.

While full technical details are yet to be revealed, there are a number of changes applied for the MY22 version of Suzuki’s litre-class performance naked - in the engine, electronics and aesthetics. 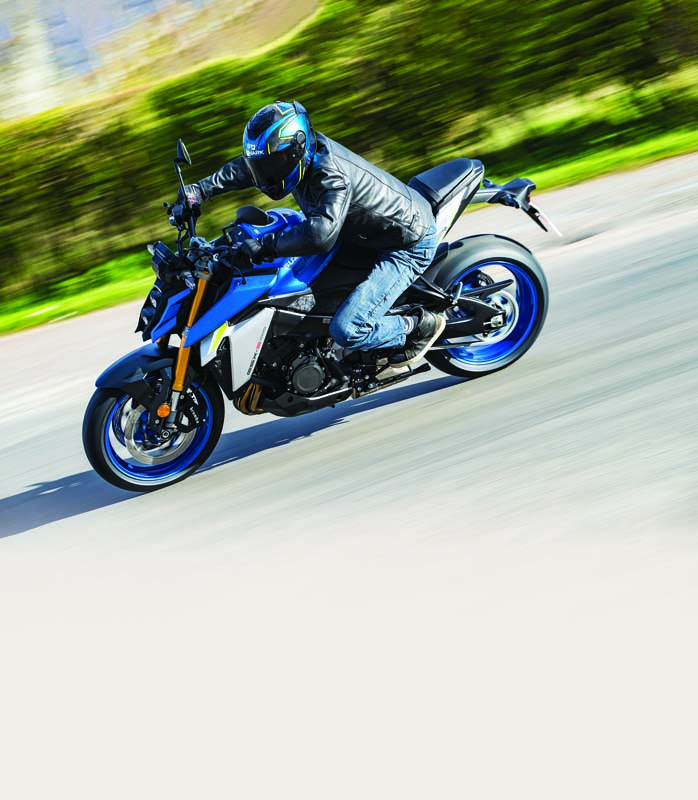 The upcoming GSX-S1000 has a whole new look compared to the current model, with new plastics from nose to tail.

A major makeover of the front end delivers a much more aggressive look that includes the lighting, which is now a double-stacked arrangement of hexagonal-shaped LEDs, with the front indicators reshaped to complement the headlight and upgraded to LED, too. Suzuki says the new ‘mono focus’ lighting has practical as well as aesthetic benefits, offering a wide, bright light. 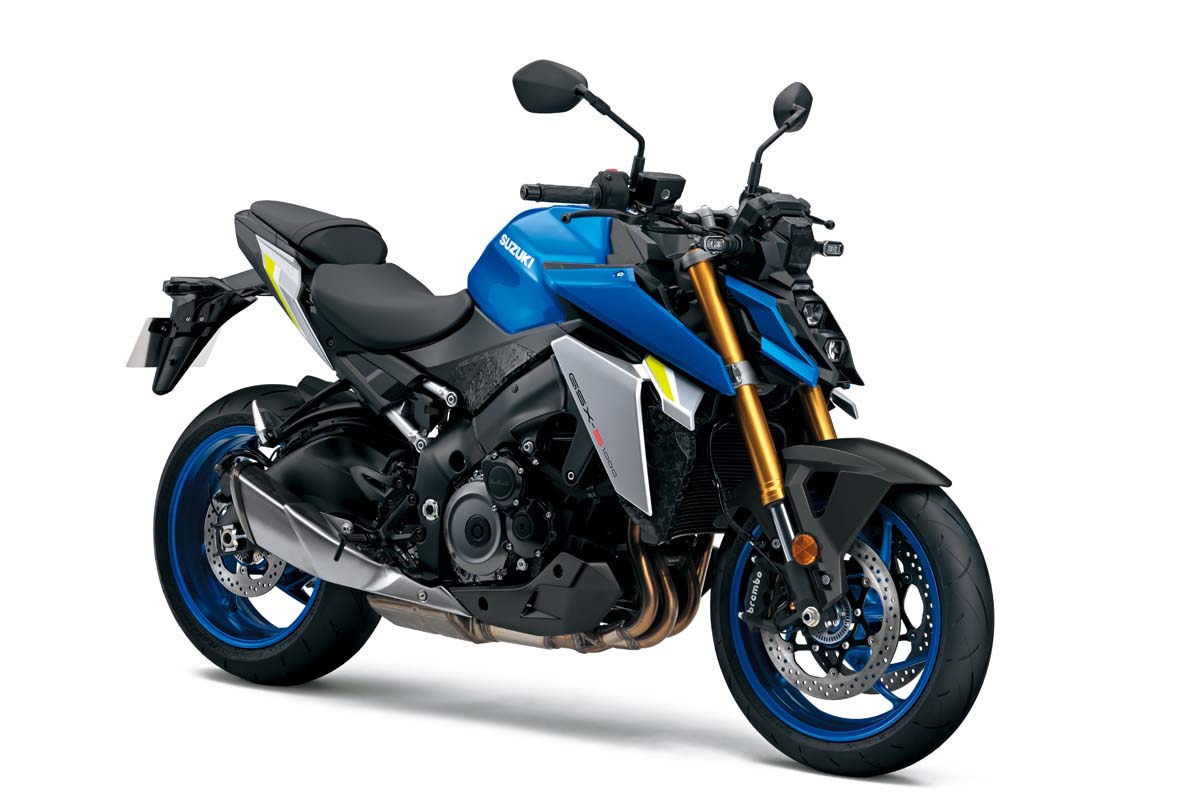 Two-piece side winglets are larger, with a sharp, blade-like shape that’s said to be MotoGP-inspired, while the front mudguard and bellypan have both been redesigned to suit.

Reshaping the fuel tank has increased capacity from 17 to 19 litres, while aft of this, a blunter finish to the tail accentuates the ‘mass forward’ redesign and gives the new GSX-S1000 something of a streetfighter look.

Three colour options, including matte grey, gloss black and the familiar Triton Blue, are listed for the new model, but whether all three will be offered locally is unconfirmed. On each colour scheme, the side panels, radiator shrouds and instrument panel backing plate are finished in an ‘urban camo’ design that’s a lot more subtle than it sounds.

While a 999cc capacity remains, the MY22 GSX-S1000’s four-cylinder engine has been updated to produce more power and a broader spread of torque while meeting Euro 5 emission regulations.

Early indicators are that the bore, stroke and compression ratios are all unchanged, but a new intake and exhaust camshaft, new valve springs and new throttle bodies have all been fitted. There’s a new airbox and new exhaust, too. 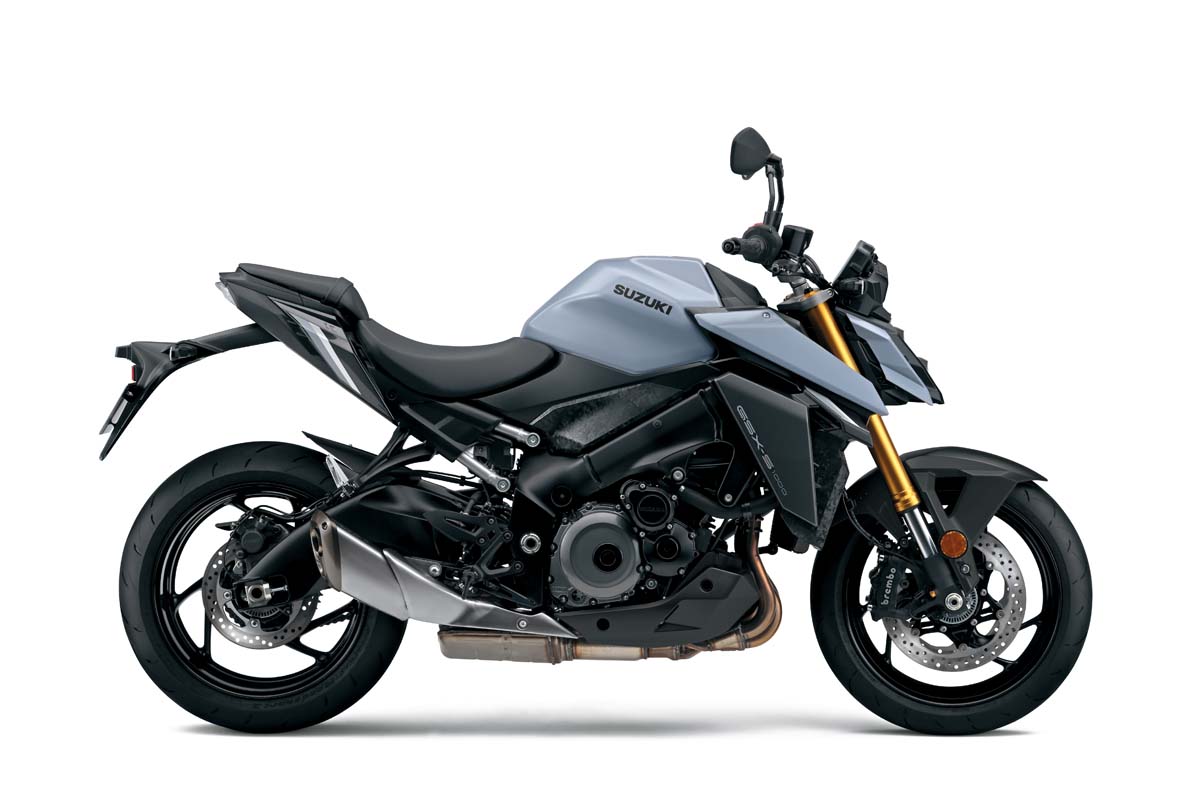 The new airbox does away with an internal separator, reducing intake turbulence, while the exhaust adds another catalytic converter, but according to Suzuki, the note is unchanged.

Combined, these changes deliver what Suzuki says is more cumulative torque across the rev range, “filling in dips in the graph with a flatter curve,” with the new throttle bodies key to this improvement, too, delivering a more controlled engine response, especially during initial throttle opening.

A slipper clutch will be standard on the 2022 model, while the six-speed gearbox from the current GSX-S1000 will carry over.

Along with its engine mods, the MY22 GSX-S1000 also comes with an updated electronics package.

Under the Suzuki Intelligent Ride System (SIRS) umbrella, the changes include a new ride-by-wire throttle, replacing the current model’s mechanical throttle. As well as being one of the major parts in being able to meet Euro 5 emission standards, the electronic throttle is also lighter and more compact.

There’s also a new Suzuki Drive Mode Selector ‘Alpha’ (SDMS-A). According to Suzuki, this and the electronic throttle work to “more accurately and finely control the relationship between throttle actuation and engine response”. 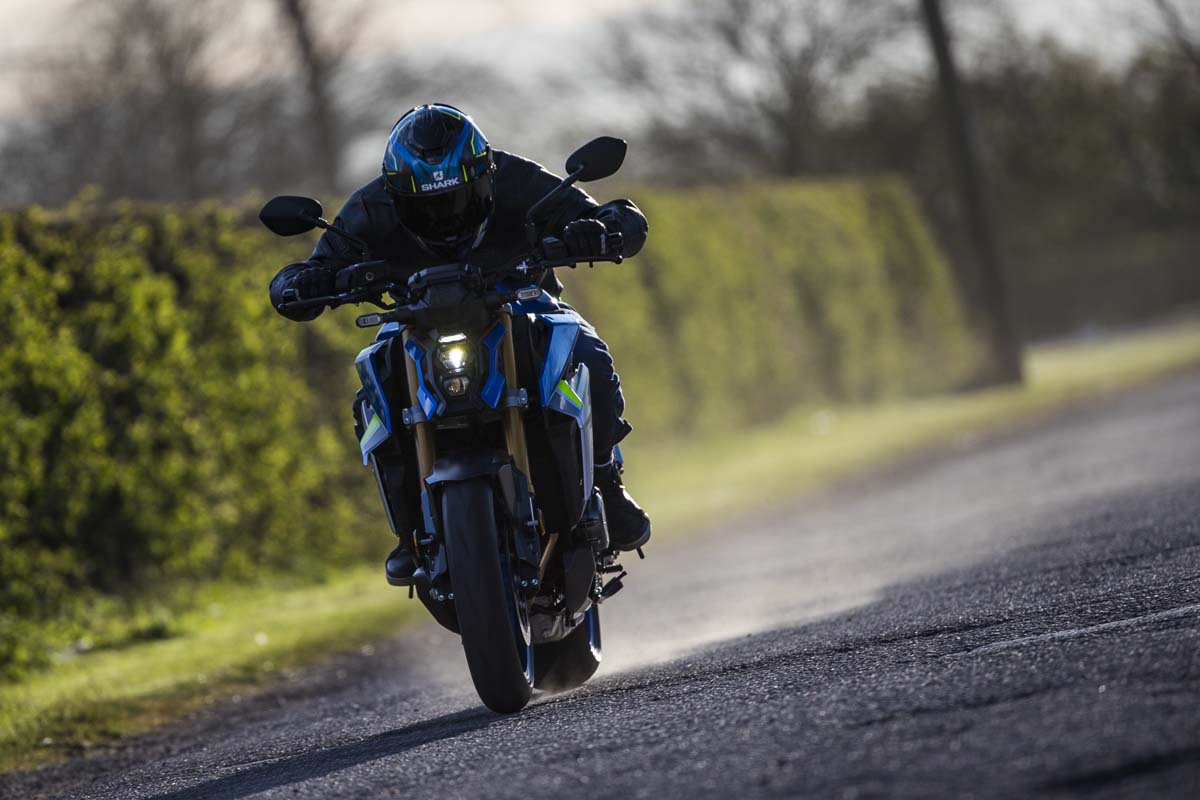 SDMS-A offers three different pre-set engine map settings, all with the same peak power but varying in the how that power is delivered. Mode ‘A’ has the sharpest and more immediate throttle response, ideal for fast dry roads or track days, while ‘C’ is the mildest, primarily for use in the wet and other low grip conditions. On top of this, three user-definable settings are also available.

A new traction control system is now five-mode adjustable (previously three mode) and can be deactivated. Sensors in the wheels, crank, gear and throttle position all feed into the SIRS’s ECU to determine the level of traction control intervention to minimise wheelspin. 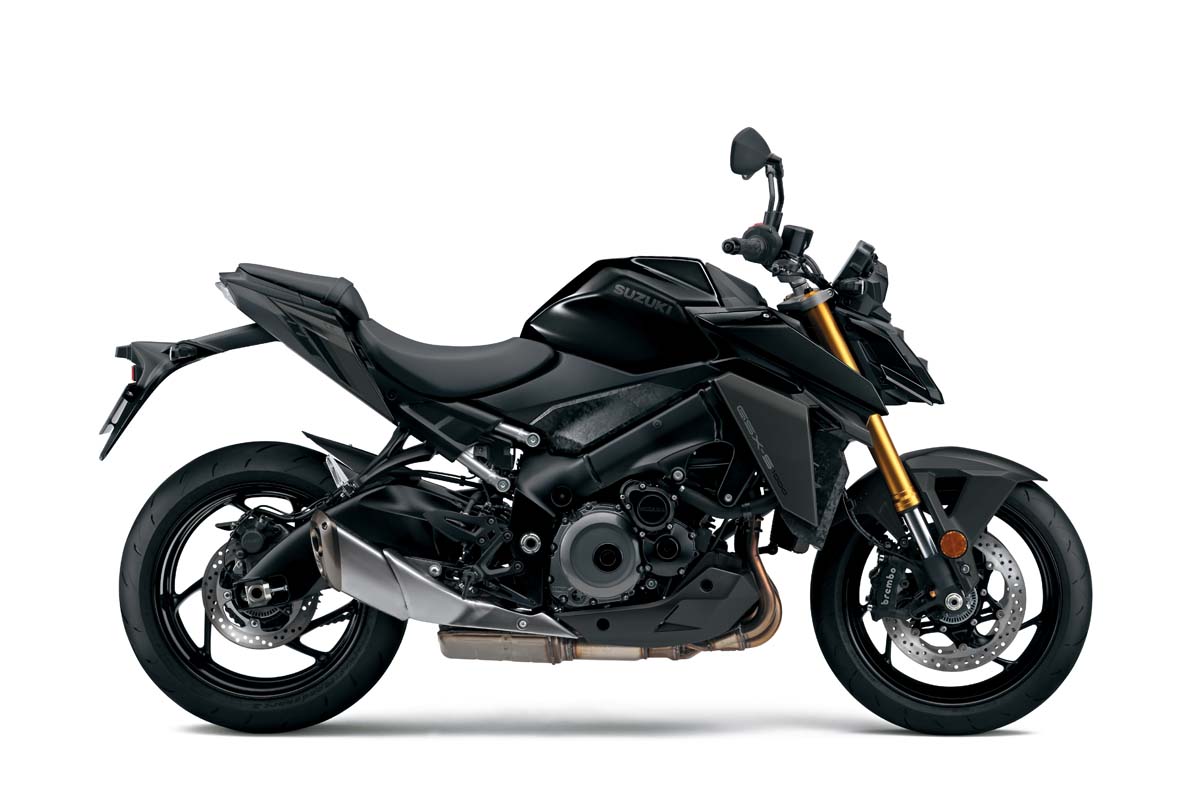 Also on the tech front, the Suzuki Clutch Assist System (SCAS) that was introduced for the MY18 GSX-S1000 has been updated to match the engine upgrades.

The instrument display has been updated with the adoption of the GSX-R1000’s LCD screen, which Suzuki claim is easier to read.

Ergo Modifications and Other Specs

The GSX-S1000 frame remains a twin spar aluminium unit, matched to a GSX-R-derived swingarm. What is new on the chassis is a handlebar that’s 23mm wider and positioned 20mm closer to the rider for a more upright riding position. Whether this is a Renthal Fat Bar, as per the current model, has yet to be confirmed. 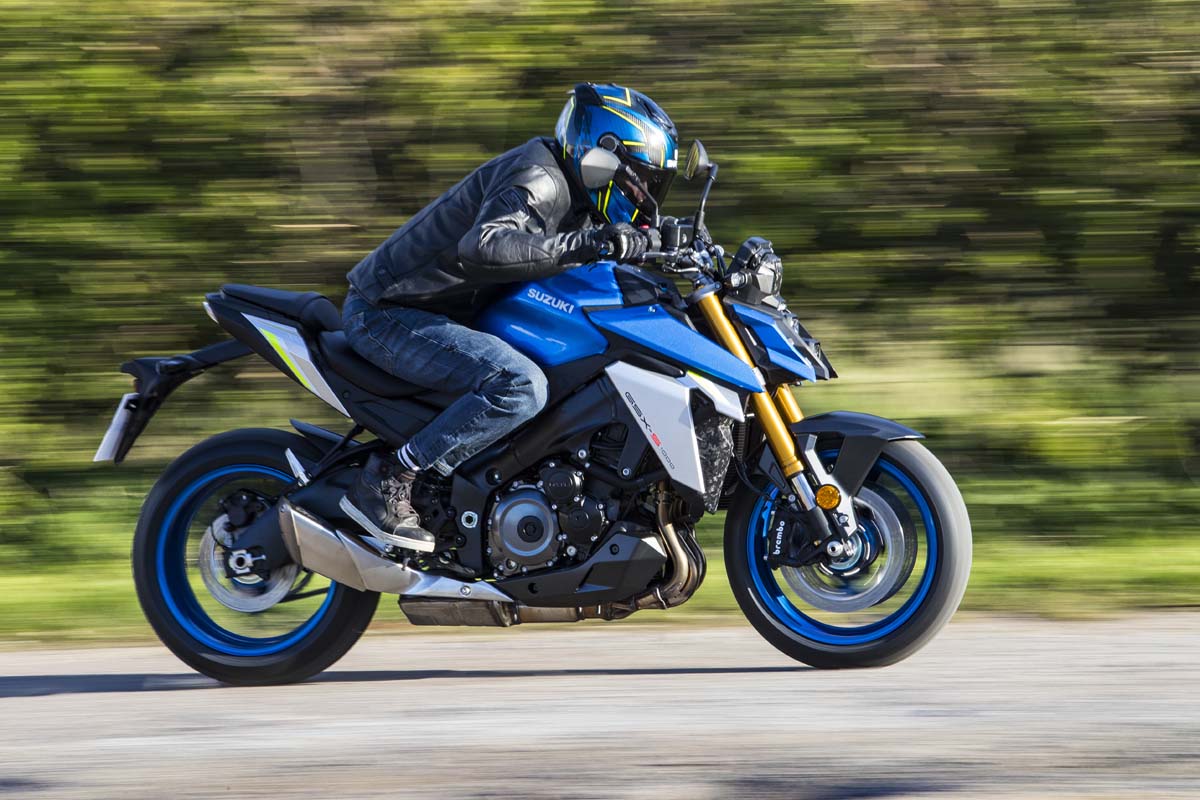 Seventeen-inch alloy wheels appear to be unchanged from the current GSX-S1000, while the tyres – 120/70ZR17 and 190/50ZR17 - are Dunlop Roadsport 2, which Suzuki describe as “custom engineered” for this model.

KYB suspension remains at each end, but settings have been revised over the current model. Compression, rebound and preload adjustability remains on the USD front fork, with preload and rebound adjustability on the rear monoshock. 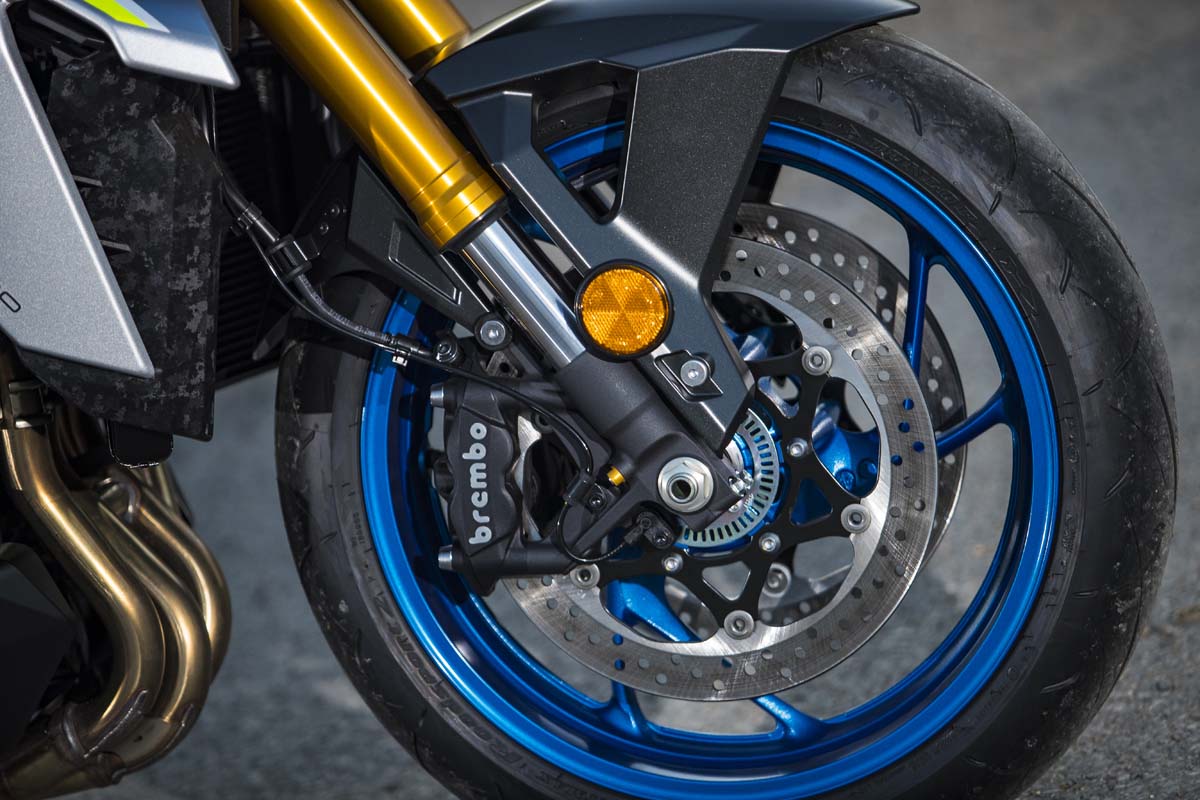 Braking is unchanged, made up of dual 310mm discs with Brembo four-piston monobloc calipers on the front and a 240mm disc with a single-piston Nissin caliper on the rear with ABS.

The larger 19-litre fuel tank improves range to a claimed 312km, and while curb weight has yet to be confirmed, reports suggest it has risen 5kg to 214kg.

While UK and European markets will be receiving the new GSX-S1000 in Q3, 2021, Australian arrival is provisionally scheduled for Q1, 2022, so there’s a while to wait.

The current MY20 GSX-S1000 is priced from $15,790 ride away, so the upgrades on the MY22 version are likely to carry a premium over that. Pricing, along with full specs and available colours, will be announced by Suzuki Australia closer to local release.