After successfully applying the retro formula to the Z900 to create the Z900RS, Kawasaki have done the same to the Z650L to bring the LAMS-legal Z650RS to life.

The coming year is shaping up to be a good one for motorcyclists. Not just for the newfound freedoms as we leave the worst of the COVID-19 pandemic behind us, but also for the (likely) return of international level racing and a national competition calendar completed without interruptions and cancellations.

We’ve also got a bunch of cool motorcycles to look forward to in 2022. One of the those is Kawasaki’s Z650RS, which was announced in September and is due for local release later this year. 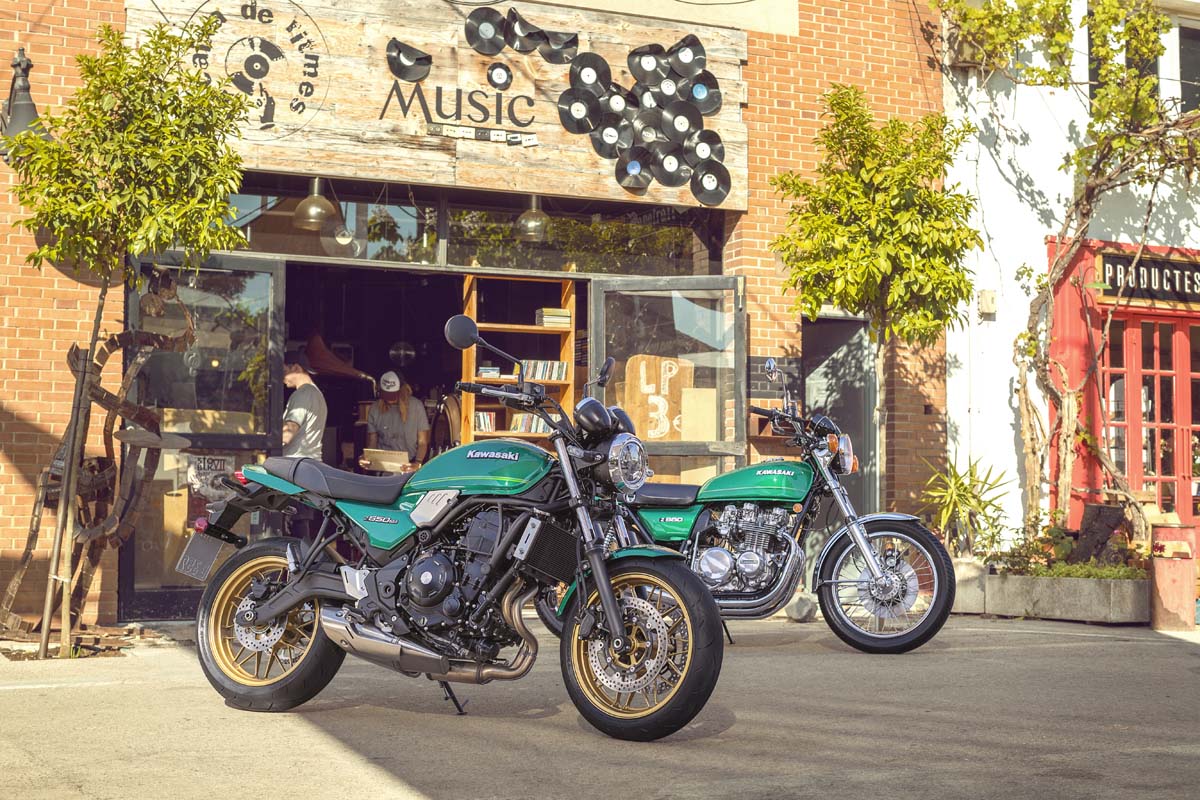 Built to the same formula as the Z900RS that was released locally in 2018, the upcoming Z650RS is scaled down to Z650L size and made LAMS legal. The ‘Retrovolution’ tag Kawasaki have applied to the Z650RS is a little awkward, but initial impressions show there’s nothing to dislike about this bike’s appearance. A scan through the spec sheet shouldn’t raise any objections to its LAMS-legal performance, either.

Specs aside, it's the appearance of the Z650RS that captures your attention, and a closer look at the images provided so far show this isn’t merely a thin veneer of retro plastics over the Z650L.

Seen alongside the Z650L that it’s based on, the Z650RS looks like a totally different bike.

Obvious styling changes include the fuel tank, seat and tail unit, higher handlebars, a round headlight and thin-spoke alloy wheels that are designed to evoke the look of classic wire spoke wheels.

But scrutinise the Z650RS against the Z650L further and you’ll notice the retro touches also apply to things like the mirrors, indicators and sidecovers, as well as the front mudguard and tail light.

The Z650L’s petal disc brakes have been replaced with round discs, there’s old-school twin-clock analogue gauges and the attention to detail sees retro side reflectors added and radiator shrouds deleted. Even the clutch and generator covers have been given a suitably retro revamp. 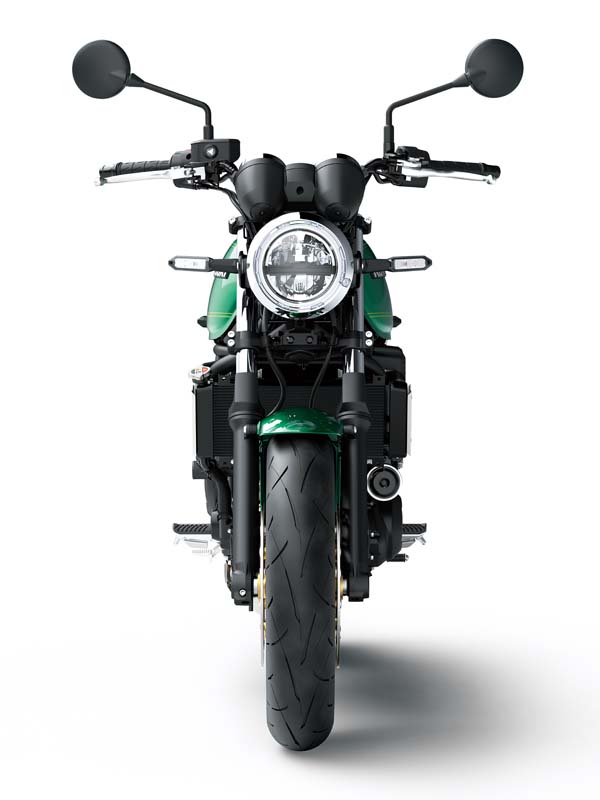 When you realise just how much has been replaced and altered on the Z650RS, it’d be churlish to suggest Kawasaki could have gone further and applied some retro restyling to the swingarm and muffler as well. While there is a bespoke muffler cover, those that want to go even further with the retro look are sure to find a suitable silencer from the aftermarket.

As mentioned, Kawasaki’s styling department have made the Z650RS look remarkably different, but under its retro suit, it’s almost identical to the Z650L.

The liquid-cooled 649cc parallel twin for the Z650L carries over virtually unchanged for the Z650RS. Unlike the Z900RS, which was detuned from the Z900, there are no noticeable engine changes between the two 650 variants. In fact, it looks like there are no changes at all. 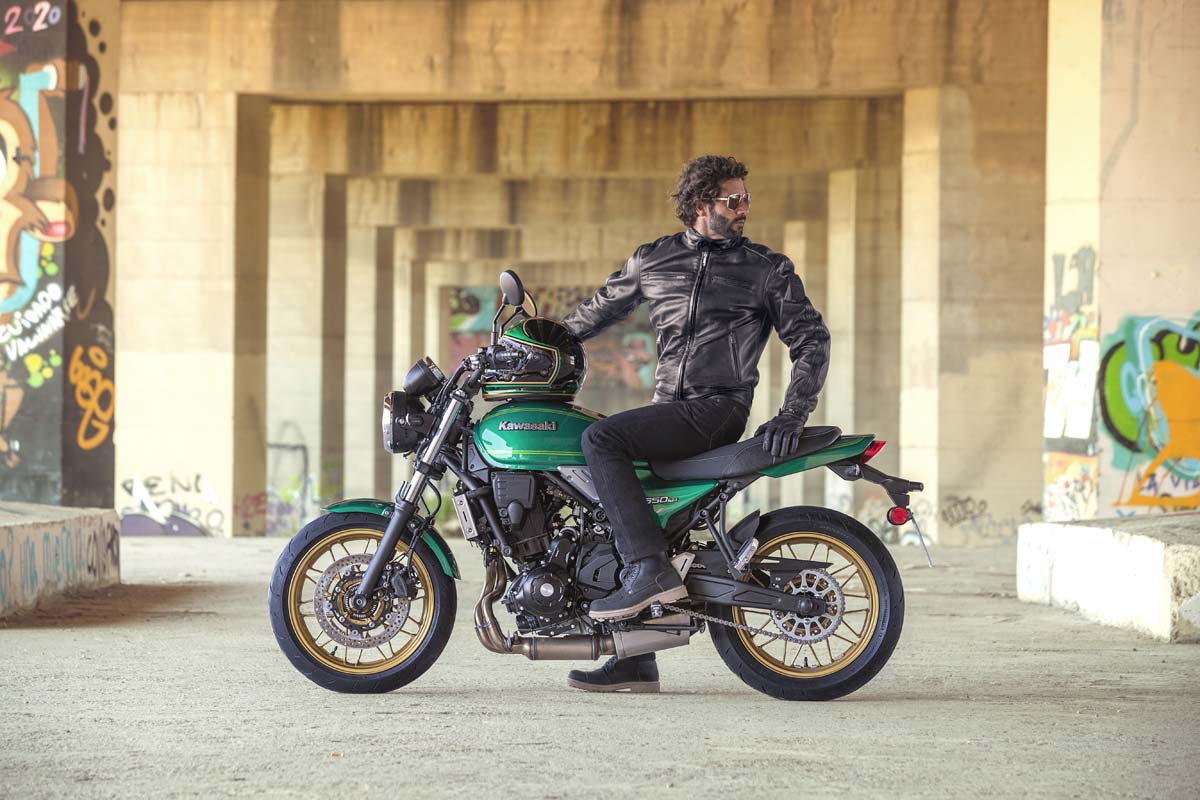 Bore and stroke are unchanged, as are features like the 10.8:1 compression ratio and dual 36mm throttle bodies. As such, performance is unchanged, too, with listed maximums of 37.8kW at 8,000rpm and 59.0Nm at 6,500rpm. That’s at the upper limit of LAMS legality, but does qualify.

It should be noted that Kawasaki have also produced a ‘full-power’ version of the Z650RS, but this will not be coming to Australia. The non-LAMS variant puts out around 51kW and can be tuned – for competition applications – to produce even more.

For LAMS riders, this opens up the possibility of getting more grunt out of the 650 once their restricted licence period ends, but this aftermarket tuning is not necessarily recommended and may impact the bike’s resale value. 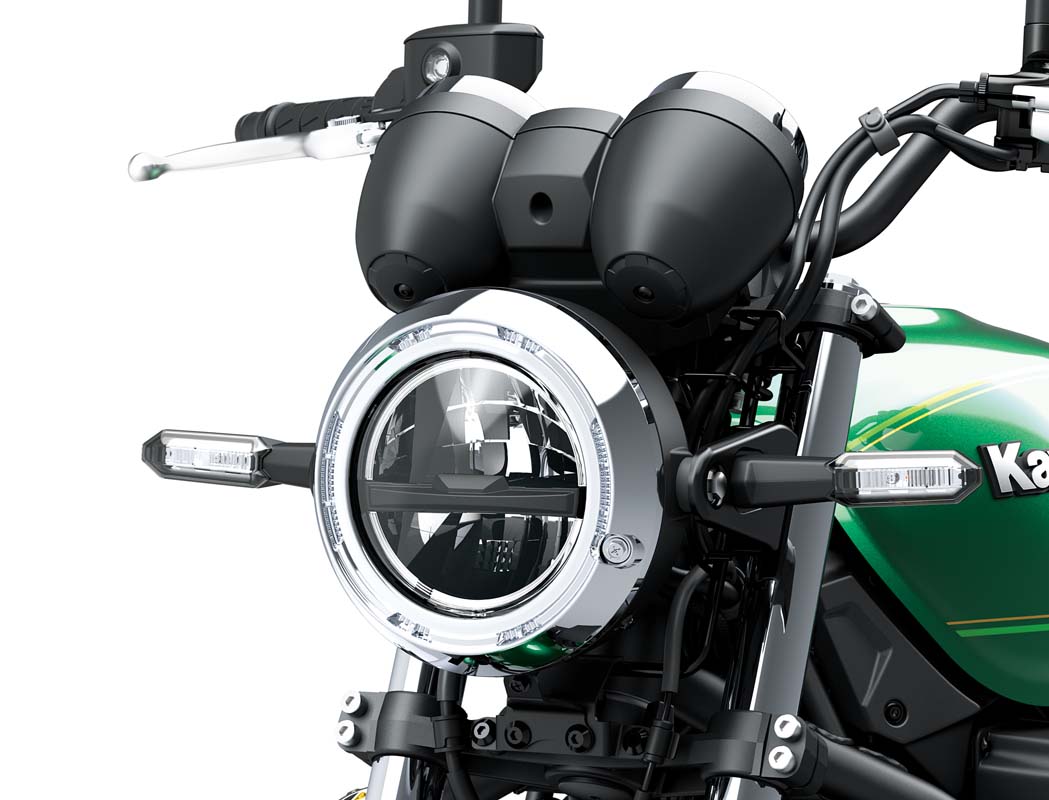 In its as-supplied spec, the Z650RS engine is said to provide smooth, linear throttle response, good performance in the low-to-mid rev range, strong low-end torque and no sudden drop in the power or torque curve as revs increase, all while remaining fuel efficient – a claimed 23.4km/lt on the WMTC cycle – and meeting Euro5 regulations.

Like the engine, the six-speed gearbox from the Z650L has been carried over to the Z650RS with the same ratios right through the gear range. 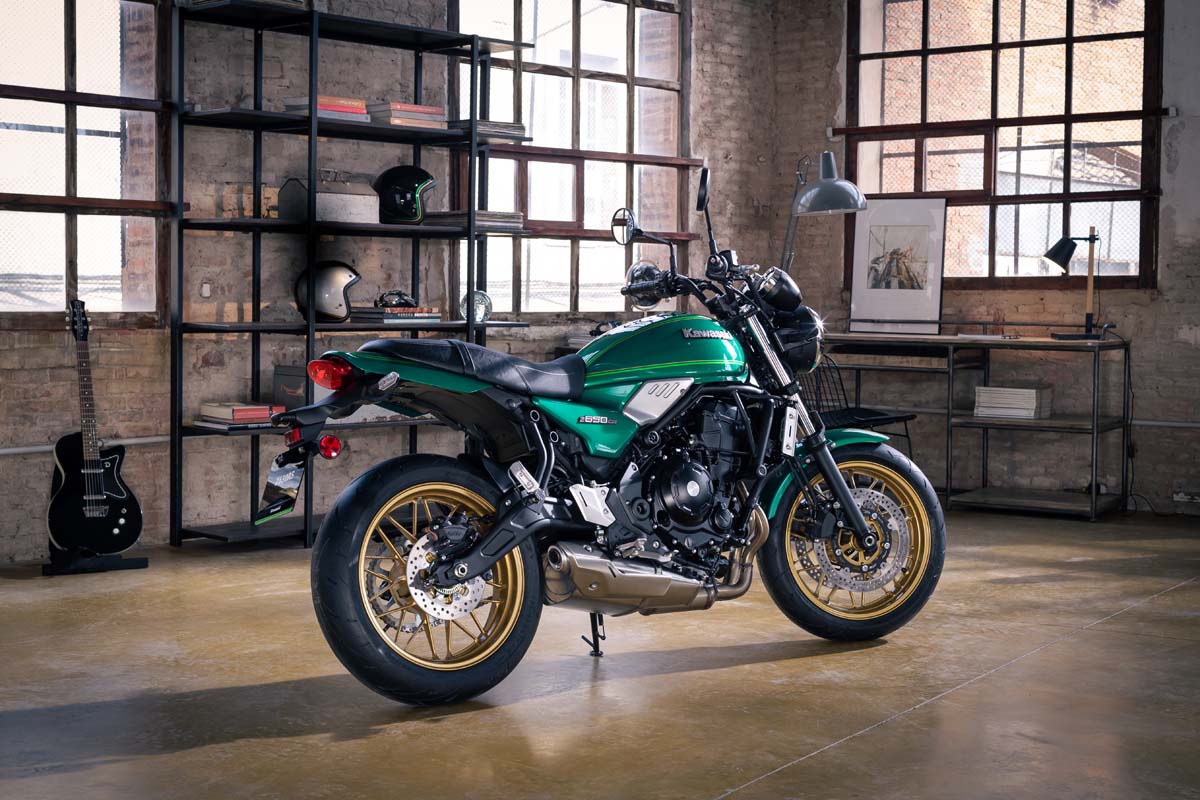 Moving to the frame, the same tubular steel trellis-type set-up features on both 650 twins, with the same swingarm, too, but there are some different finishers around the swingarm and frame attachment points. The bigger difference can be found on the subframe, which on the Z650RS is altered to suit its lower rear profile. Frame weight is listed at just 13.5kg and swingarm weight at 4.8kg. 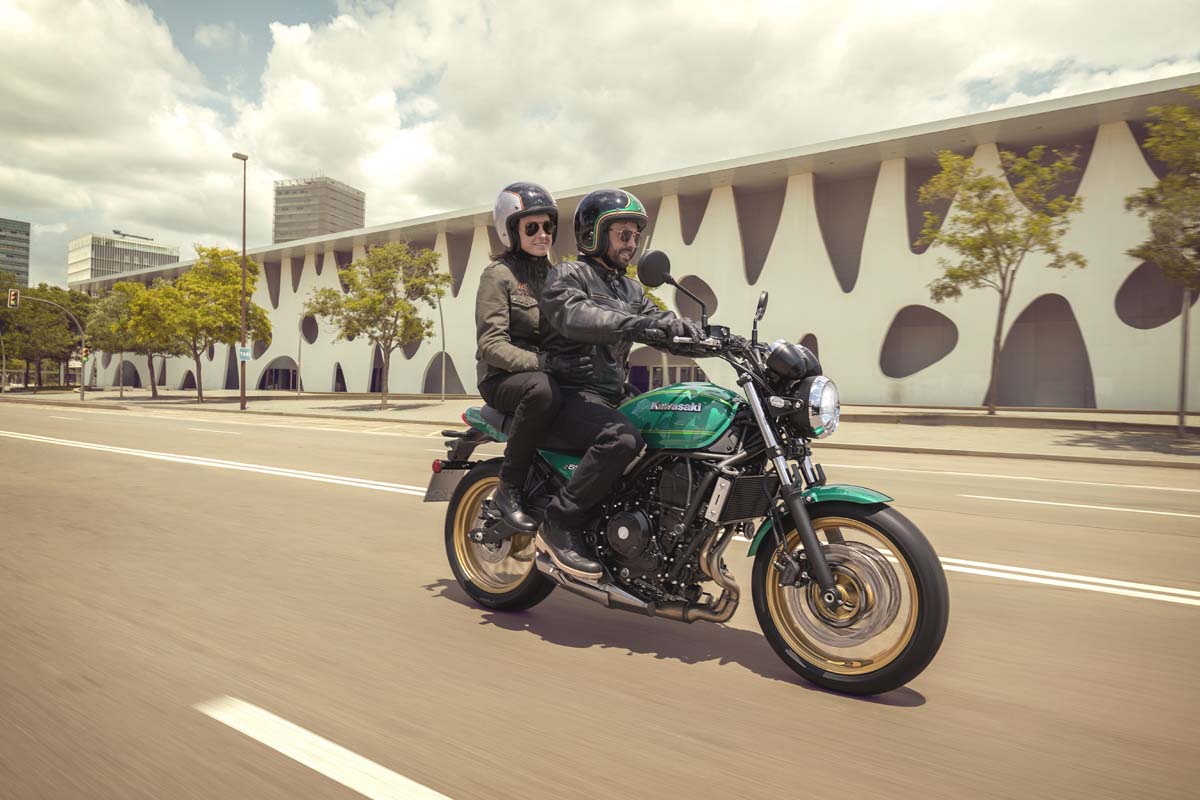 Stripped of plastics, the Z650RS subframe is lower than that on the Z650L, but seat height is actually higher on the retro model, at 800mm compared to 790mm on the Z650L.

Other minor differences include a slightly steeper rake of 24 degrees on the Z650RS, but trail is unchanged at 100mm. Wheelbase is 1,405mm and ground clearance is 125mm – 5mm less than the Z650L in both instances.

The retro styling of the fuel tank allows a narrow cross section for good comfort and knee room, but robs some capacity – 12 litres compared to 15 litres in the Z650L. That reduced fuel capacity means wet weight is also reduced, at 186kg compared to the Z650L’s 187kg. 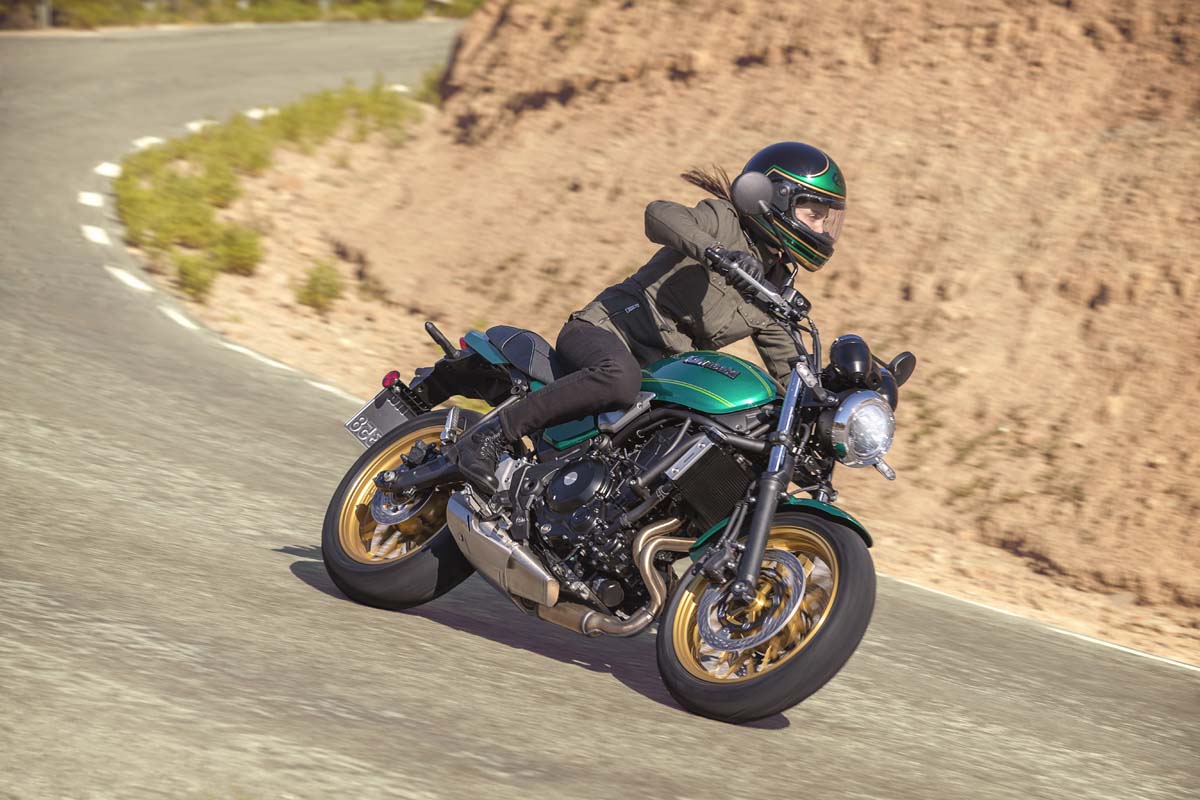 Other touches to improve riding comfort include rubber inserts in the footpegs and rubber-mounted handlebars that, thanks to longer tubes in the front suspension, are mounted 20mm higher than the Z650L. The bar itself is of a different shape, sitting 50mm higher and 30mm closer to the rider, while steering angle is 35 degrees in each direction.

The result of all this is a very upright riding position that’s oh-so suitable for a retro naked and should be welcomed by first-time riders.

For additional comfort, the brake and clutch levers are 5-way adjustable.

Moving on to the Z650RS suspension, Kawasaki say the set-up has been tuned “to create a balanced motorcycle with easy handling”. The combination of a 41mm tele fork front and horizontal back-link monoshock rear suspension is the same as that on the Z650L, with preload adjustability at the rear.

For the brakes, there are dual 300mm discs up front, gripped by dual piston calipers, while a 220mm rear disc has a single piston caliper. Aside from disc shape, this is identical to the Z650L.

ABS is standard, which is one of the few high-tech elements on this retro naked.

Befitting a retro-styled bike, there isn’t a lot of tech on the Z650RS.

There is the aforementioned ABS, and while it is effective, it’s not the advanced cornering type available on some of the latest supersport bikes. 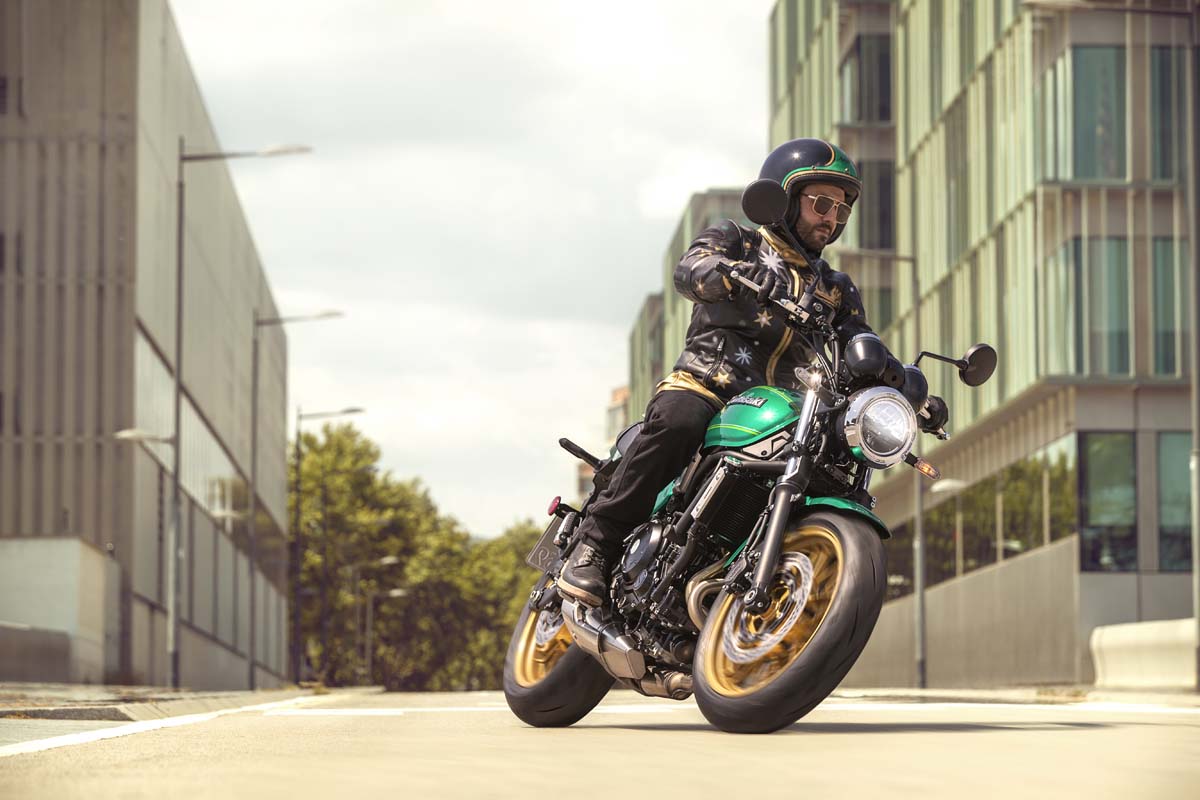 LED lighting features from nose to tail, with the 130mm headlight split into high and low beam chambers, but designed to mimic the appearance of an old-school bulb headlight. The same approach has been used with the LED tail light.

A slip/assist clutch is standard, but there’s no quickshifter.

Nestled between the analogue speedometer and revcounter is a white-on-black LCD screen that carries a gear position indicator and displays for fuel level, engine temp and a clock, as well as an odometer, two fuel consumption displays and two tripmeters.

There’s also an ‘Economical Riding Indicator’ that appears on the LCD screen when fuel consumption is being optimised by riding style. The usual warning lights are spread across the lower section of the analogue clocks.

Pick Your Style. . . and Upgrade

The 2022 Kawasaki Z650RS will be offered in a choice of two colours – Candy Emerald Green and Metallic Moondust Grey.

The former is the more obviously retro of the two and adds subtle green and gold tank stripes, along with graphics said to be inspired by the 1976 Z650. Gold wheels and hubs feature on this colour scheme, as do silver finishing panels and chromed trim rings on the headlight and gauges. 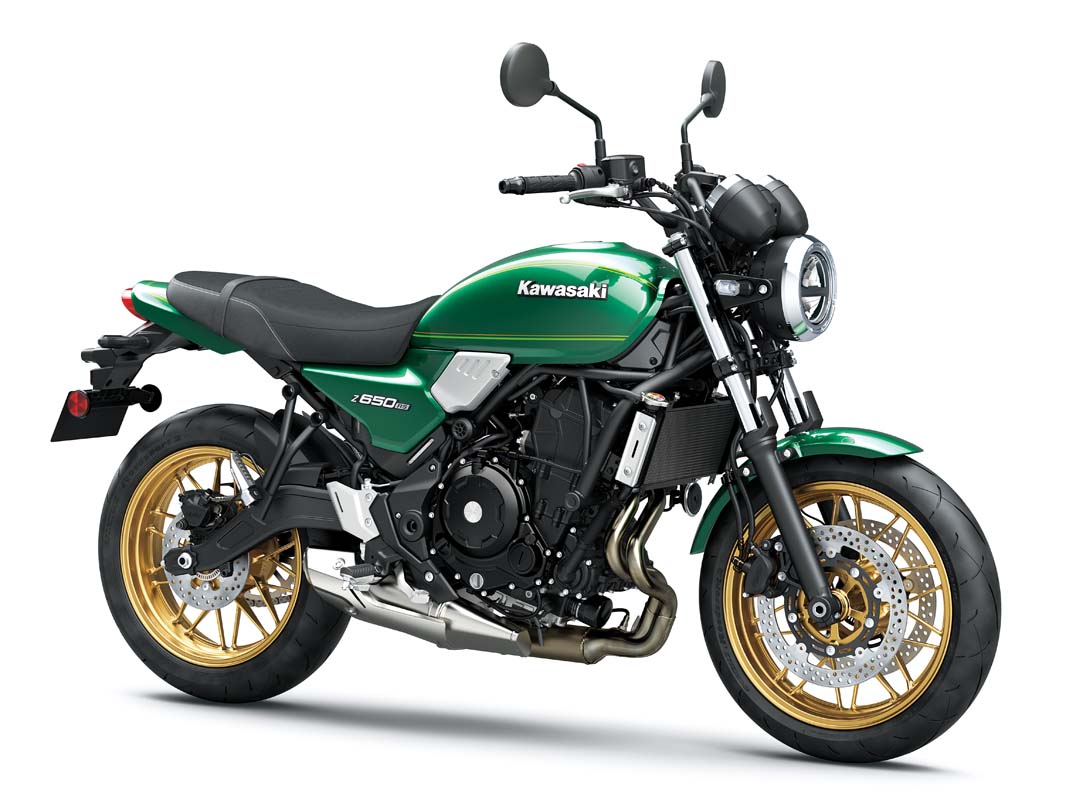 On the Metallic Moondust Grey, there’s a more modern approach. The tank gets an ebony and copper graphic that is complemented by copper rim stickers. The headlight and gauge trim is in gloss black, while the side panels are a mix of black, grey and silver.

A black vinyl seat with a grippier suede-look upper section is common to both colours.

Due for Australian release later this year, no pricing had been announced for the 2022 Z650RS at time of writing.