One of Kawasaki’s most enduring and popular models, the LAMS legal KLR650, has been given a major makeover ahead of a local market release later this year.

The KLR650’s versatility – as a daily commuter, trail basher and budget adventure bike – has made it particularly popular here in Australia and it’s stayed in our market years after it’s been discontinued elsewhere. But with the upcoming KLR650, Kawasaki appear to be aiming it once again at a global audience.

The new version of the long-lived adventure bike is due for local release later this year (as a 2022 model) and will be offered in two variants – Standard and Adventure. New and updated features are common to both, with the Adventure adding a selection of accessories as standard.

While much of the KLR650’s componentry has changed, at its heart is the same four-stroke single that’s powered this model since its debut in 1987.

Kawasaki says that, while numerous parts have been revised, the “fundamental design of the long-running, trusted engine remains unchanged”. Based on comparisons of 2021 and 2022 data, the revisions have resulted in an extra cc, too – now at 652cc – but this will have no impact on LAMS legality.

The main revision on the engine is the inclusion of EFI, finally bringing the KLR650 into the modern age. Some may bemoan the addition of electronic fuel injection, but it’s essential in achieving emissions targets, particularly in Europe. Kawasaki adds that fuel injection makes for easier starting, particularly in cold conditions and at high altitudes, as well as improved fuel economy.

The 4-valve DOHC head remains, as does the 100mm x 83mm bore x stroke, but the intake and exhaust cams have been reprofiled for improved mid-range torque. Cam chain guides are now made from stronger material, too.

To meet emissions regulations, the exhaust header pipe has narrowed from 42.7mm OD to 35mm, with an O2 sensor and catalytic converter added.

Despite some hopes of a six-speed transmission coming with the MY22 upgrade, the five-speed ‘box remains, but there have been minor changes to the 3rd, 4th and 5th gears. These are all about improving reliability, though, not adjusting ratios. The clutch bearings have been upgraded with the same goal.

Other changes include a larger fuel tank (up from 22 to 23 litres), the incorporation of a lighter battery and an increase in generator output from 17 A to 26 A. This is mainly to accommodate the draw from accessories, like heated grips and fog lamps, as well as the devices that can be run/charged off DC/USB outlets that are standard on the KLR650 Adventure.

The KLR650’s steel double cradle frame remains, but one curious change is the integration of the subframe to the main frame. Previously bolt-on (and criticised for the weak bolts holding it in position), the subframe is now welded in place, which may have its benefits but there are also drawbacks, namely that any subframe damage may require an entire frame replacement.

Despite a 30mm longer swingarm, overall length on the MY22 KLR650 has decreased by 15mm. Handlebars have been widened by 10mm and a new, taller windscreen has increased total height. On the standard MY22 KLR650, LxWxH is 2280mm x 970mm x 1465mm, with height at 1455mm for the KLR650 Adventure. Ground clearance is unchanged at 210mm, but seat height has dropped by 20mm to 870mm for both variants.

Those wider handlebars are part of a fine tune of the KLR650s ergonomics that have also seen the footpegs moved out 10mm. Both bars and pegs on the MY22 bike will be rubber-mounted to reduce vibration being transmitted to the rider. Reshaping the fuel tank has improved knee comfort, while the seat’s shape, covering, padding and underlying dampers have all been updated, too. The outcome is what Kawasaki call a more relaxed riding position that makes long hours in the saddle more comfortable.

For long miles on tarmac, the windscreen sits 50mm higher than the current KLR650 and can be tool adjusted to sit an additional 30mm higher. The side stand is shorter for easier activation and the pillion grab bars have been reshaped for improved grip.

While the basic suspension components are unchanged – a 41mm tele fork front and Uni Trak monoshock rear – the tuning has been adjusted. Kawasaki says this is to accommodate the frame changes, but some of this must be to also compensate for the extra 16kg – yes, 16kg! - that the new KLR650 carries – now at 210kg. With its additional standard kit, that wet weight blows out to 222kg on the KLR650 Adventure.

The KLR650’s wheel combination is unchanged, too; a 21-inch front and 17-inch rear. Both retain inner tubes, but the rear rim is now stronger and axle shafts have been thickened at each end.

Along with EFI, the introduction of ABS is the other key “modernization” on the MY22 KLR650. It’s a conventional system, without the cornering functionality or other bells and whistles of more expensive adventure bikes. The MX-style petal discs have been replaced with conventional discs and the front disc is larger at 300m. While the rear disc retains a 240mm diameter, it’s now 1mm thicker.

The abundance of reshaped bodywork on the MY22 KLR650 is most obviously seen in the radiator shrouds and headlight surround, but there are changes to the sidecovers, exhaust shield and indicators, which along with the reshaped seat, windscreen and tail light, give the KLR650 a whole new look from front to rear. 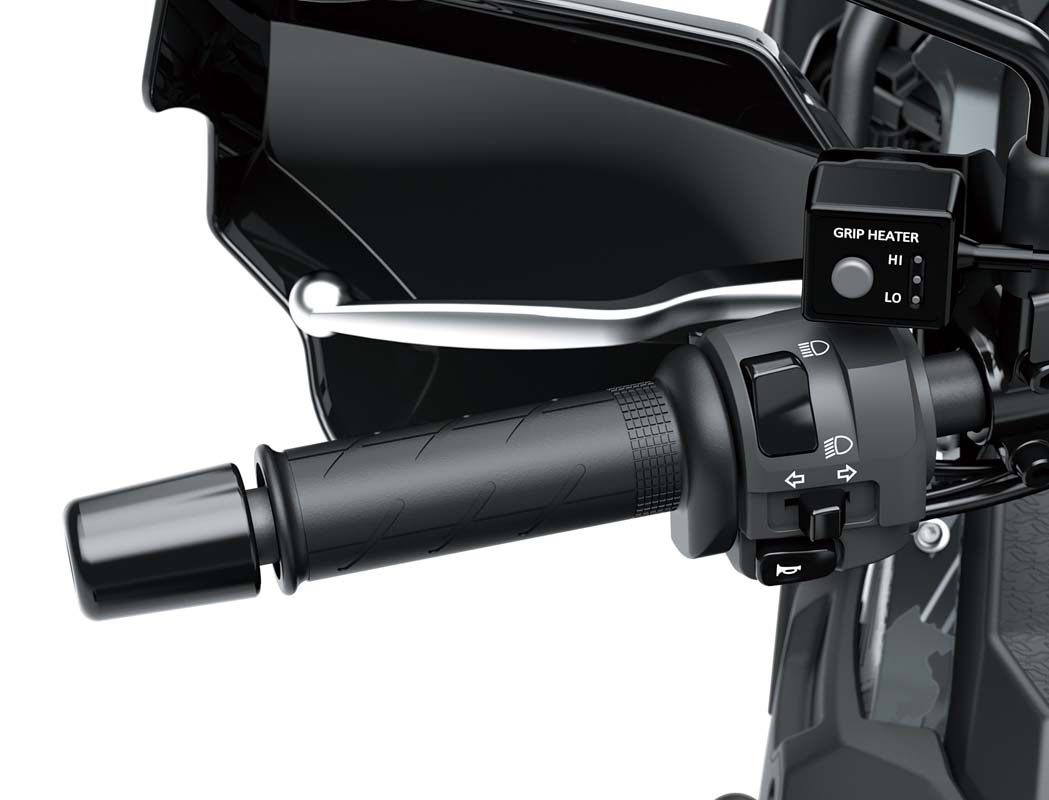 The overall design reflects the aggressive, angular appearance of recent Kawasaki road bikes, while the stencil graphics add a military look that’s enhanced by the paint options - Pearl Sand Khaki on the standard KLR650 and Cypher Camo Grey on the KLR650 Adventure. Black rims are common to both variants.

A dual-style headlight remains, but the MY22 KLR650 upgrades this to LED, with the analogue instrument cluster upgraded to an LCD screen. Adding a fuel gauge, but losing the revcounter, the digital display is basic, with only a speedometer, odometer, two tripmeters and a clock, as well as the usual warning lights.

New luggage options include 21-litre panniers and a 42-litre top box that can be locked with a single key. Each pannier and the top box can hold gear weighing up to 5kg. The top box is large enough to hold an MX-style full face helmet (a welcome feature) and sits on a new, larger aluminium carrier.

The panniers are standard on the KLR650 Adventure, along with LED fog lamps, frame sliders and DC and USB sockets. The top box remains an extra-cost accessory, with other optional extras including a lower seat and heated grips. 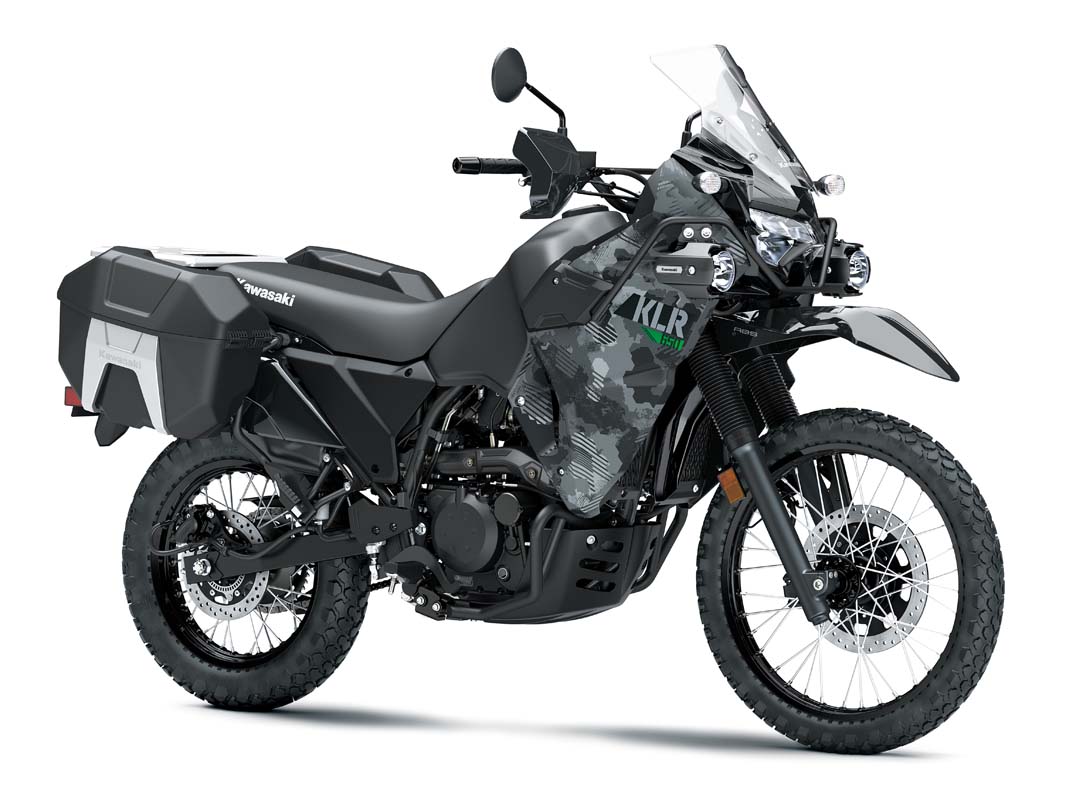 The 2022 Kawasaki KLR650 and KLR650 Adventure are due for an Australian release in the second half of this year, with pricing to be revealed closer to local arrival.

Currently, the KLR650 can be had for under $10,000 ride away in most areas. That’ll almost certainly change given the upgrade in standard specification on the MY22 version, with the Adventure variant adding a further premium.

Watch this space for more information on the 2022 Kawasaki KLR650 as its release draws nearer.