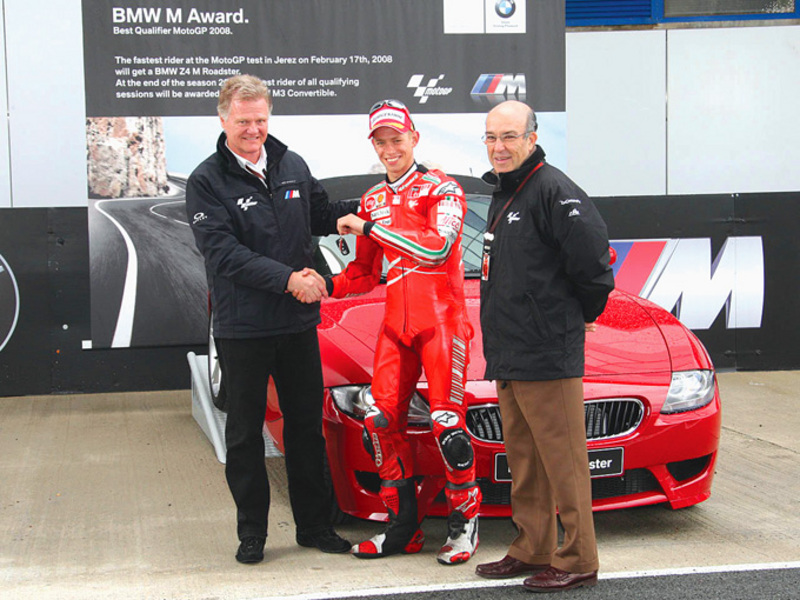 If this year's test follows that pattern, Marlboro Ducati's Casey Stoner looks set for another dominant year.
The Official MotoGP test, at Spain's Jerez circuit, is usually the best indicator of who's going to top the time sheets for the season ahead.

If this year's test follows that pattern, Marlboro Ducati's Casey Stoner looks set for another dominant year. At the conclusion of the second day of the test, Stoner was the fastest man on track, and scored himself a new BMW Z4 coupe for his efforts in the BMW M Award qualifying shootout.

Second quickest in the shootout was Valentino Rossi (Fiat Yamaha), a full second behind Stoner, even though the pair now share the same tyre brand. 2006 MotoGP World Champion Nicky Hayden (Repsol Honda) also had a late but unfruitful attempt at a Stoner-challenging lap, finishing third fastest after topping the timesheets the previous day. The 'Kentucky Kid' was the leading Michelin rider.

Rain came into play at the Spanish circuit, which allowed Anthony West to shine, although the drying track didn't give him enough of an advantage to really challenge his countryman in Stoner. The Kawasaki rider set his quickest time at the midway point in the session, but still held off Andrea Dovizioso (JiR Scot Honda) and Shinya Nakano (Gresini Honda) in the top six.

Hayden turned the fastest lap in the final day of the 3-day session, leading three other Michelin riders in dry conditions. Rossi was the fastest Bridgestone rider, while Stoner suffered a minor spill.