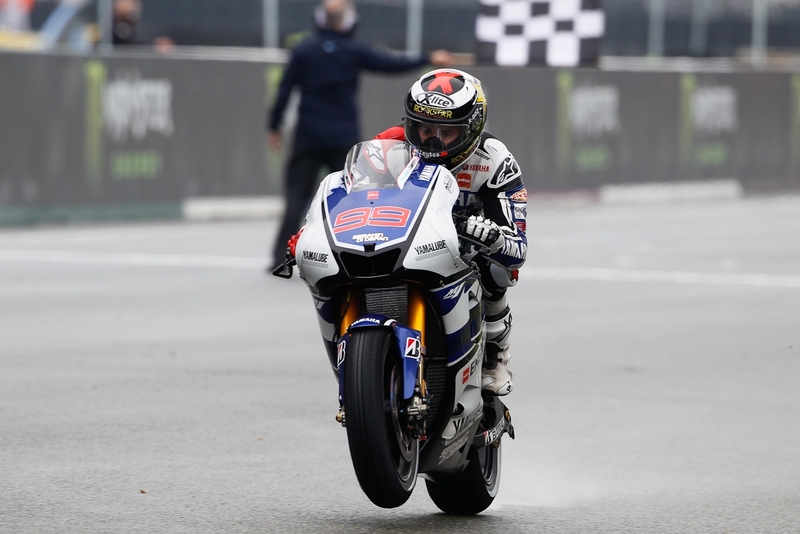 Pole for the race was secured by Repsol Honda's Dani Pedrosa, who recorded a 1'33.638 in qualifying
In treacherously wet conditions at the Monster Energy Grand Prix de France, Yamaha Factory Racing's Jorge Lorenzo triumphed, while Ducati's Valentino Rossi recorded his best result with Ducati to finish second ahead of Casey Stoner. Lorenzo's result means he also regains the championship lead from Stoner.

Pole for the race was secured by Repsol Honda's Dani Pedrosa, who recorded a 1'33.638 in qualifying. The rest of the front row of the grid consisted of Stoner (1'33.941) and Monster Yamaha Tech 3's Andrea Dovizioso (1'33.976). Lorenzo started from the second row of the grid, as did his team mate Ben Spies, the Yamaha Factory pair split by Monster Yamaha tech 3's Cal Crutchlow. Rossi qualified seventh.

RACE
In the wettest conditions seen so far this season, Pedrosa got the jump off the line, followed by Stoner. Their lead was short lived, as Lorenzo charged past the pair and instantly pulled out a gap. Crutchlow also made a good start in fourth, followed by a surging Rossi in fifth. It was heartache for the locals from the beginning as Power Electronics Aspar's French hope, Randy de Puniet, dropped his bike on the grid, and had to head out on his spare one. Near the front, Rossi soon moved past Crutchlow to take fourth, with Dovizioso following suit almost instantly. Avintia Blusens' Iván Silva's race was ended early as he fell in the wet conditions.

With Lorenzo building a three second lead, Stoner pushed past Pedrosa to chase down his championship rival. Pedrosa's difficulties on the wet surface allowed Rossi to capitalise, taking third place on lap three. The Tech 3 pair also passed a struggling Pedrosa as they looked to hunt down Rossi. Near the back, Lorenzo's teammate Ben Spies was struggling and had a wobble at the end of turn two, shortly after which he briefly entered the pits. Cardion AB Racing's Karel Abraham retired with 17 laps to go, with NGM Mobile Forward Racing's replacement rider Chris Vermeulen also having to come in for a helmet change.

As Lorenzo was maintaining a three second mark ahead of Stoner, it was the tussle for third between Crutchlow, Dovizioso and Rossi that was providing some breath-taking overtaking in the slippery conditions. Ten laps before the end it was misery for Crutchlow as he lost the front in the first chicane, leaving the two Italians to fight it out for the final podium spot, with Rossi taking third just two corners later. The Brit managed to restart his bike and re-join in eighth. Meanwhile, Lorenzo had extended his lead to six seconds over a struggling Stoner, who was a further four seconds ahead of Rossi.

With five laps to go Stoner was held up slightly by Avintia's Yonny Hernandez, allowing Rossi to get to within half a second of the Australian world champion. Two laps later Dovizioso crashed out of fourth tying to stick with the pair, while further down the field, Came IodaRacing Project's Danilo Petrucci crashed out of 11th.

The last three laps saw a battle of old adversaries, as Stoner and Rossi swapped positions. However, Rossi passed Stoner in the first chicane on the last lap, after which he pulled out a lead big enough to secure second ahead of the Aussie. This is the best result Rossi and the Ducati team have had in the past two seasons.

At the front, Lorenzo took the chequered flag, also taking an eight point lead at the top of the championship ahead of Stoner. Pedrosa managed fourth, while LCR Honda MotoGP's Stefan Bradl recorded his best ever result in fifth, ahead of Nicky Hayden. Dovizioso, who managed to re-join after crashing finished seventh ahead of Crutchlow, while Pramac Racing's Hector Barbera and San Carlo Honda Gresini's Álvaro Bautista completed the top ten.

Paul Bird Motorsport's James Ellison put in a great performance to finish as top CRT in 11th. De Puniet suffered yet more misery in front of his home crowd as he crashed on his spare bike towards the end. 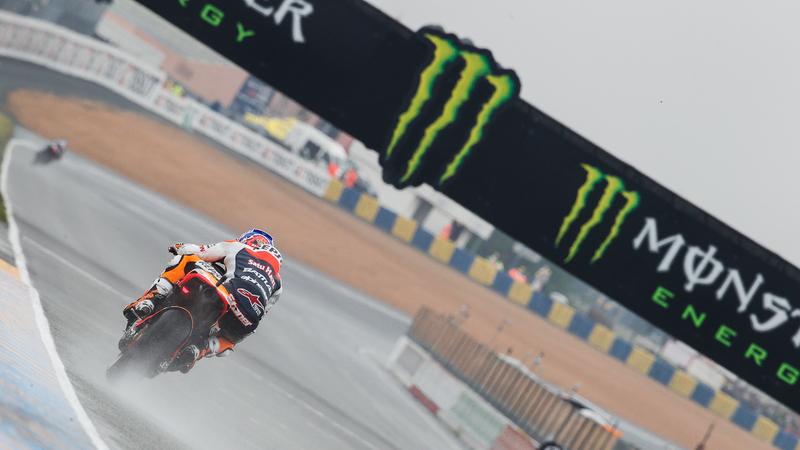 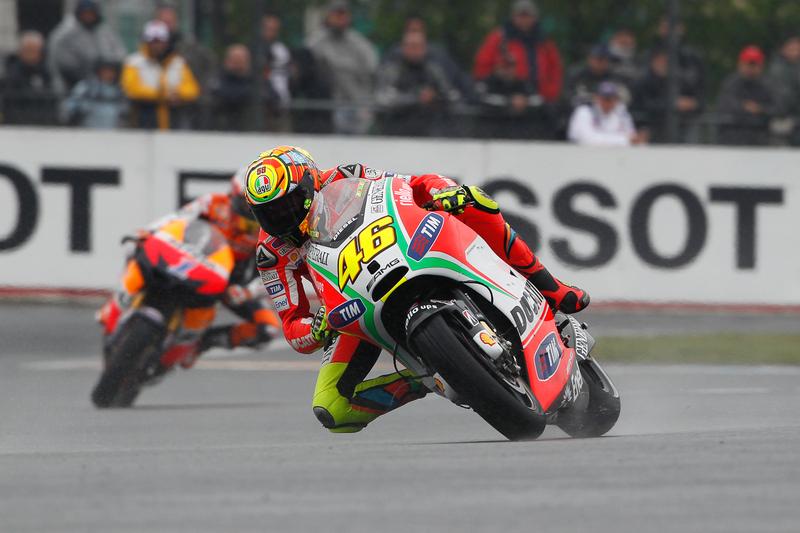