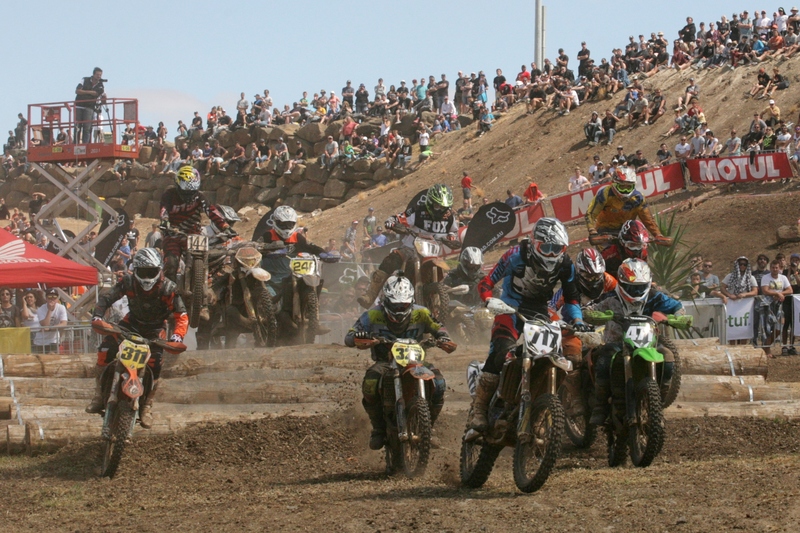 The purpose-built track at Calder, described by some riders as the most challenging and technical this year, incorporated part of the 'Thunderdome' outer wall for a steep incline and decline, as well as logs, tyres, metal ramps, a mud hole and punishing rock sections. The Pirelli tyre section, consisting of large truck tyres laid on their flat, was also deceptively tricky, sending a few riders over the bars, or catching front ends and stopping bikes dead.

In front of the series' largest crowd this year, Clubman, Expert, Over 35 and Women's classes all produced their own stars, but the main battle was in the Pro class, where the big guns from Yamaha, KTM and Husqvarna ensured that the finale, which would also decide the KTM Australian Enduro-X Nationals champion for 2014, was intense.

Hollis came to the Calder Park finale with a 13-point championship lead over Price, but as previous rounds had shown, anything can happen in Enduro-X, so Hollis's lead was by no means secure. Milner and Boyle were also possibilities of taking the title.

41-year-old Brown, a veteran of numerous off-road disciplines and runner-up in the US Enduro-X series, brought a lot of experience in this format to Australia, so it was no surprise when he did well in the opening heats, then set the fastest lap in the Top 10 Shootout that determined gate selection for the final, which was split over a trio of five lap races, with a 5-minute break between each.

Privateers, like the impressive Beau Ralston (Yamaha), along with the appearance of the Christini 2WD machine, ridden by Trials specialist Jack Field, added extra interest to the Pro class lineup.

Race 1
Race 1 in the Pro class saw Brown get a great start, then open up a gap over the field as he sailed over the obstacles. Behind him, Ralston showed the factory KTM and Yamaha riders a thing or two, keeping pace with CDR Yamaha's Milner. Behind them, Hollis got a poor start, falling back through the field to be dead last at one point, then playing catch up for the rest of the race.

After a blazingly quick second lap, the fastest of the race, Price had the chance to clinch a podium and significantly close the championship gap on Hollis, but became wedged in one of the rock obstacles. By the time he extricated himself, he'd fallen back to seventh. Still, he finished two places ahead of Hollis, narrowing the Yamaha's rider's championship lead.

Race 2
Race 2 saw another frantic start, and this time it was Milner who was the victim, while a pair of falls from Brown on watered sections of the track allowed Ralston to take the lead. Hollis got a better start this time round, and was within striking distance of Brown, but more importantly, had Price behind him.

Three laps in, Keegan was a casualty, crashing and pinching a nerve in his back that ended his day, while the rest of the field had strung out behind Ralston. Hollis, who had damaged his wrist in a race 1 fall, was battling a snapped clutch lever this time around, forcing him to ride with caution.

The chequered flag went to Ralston, with Brown more than five seconds behind, followed by Hollis, Price and Kearney. Milner recovered to take eighth, but rued his poor start and a fall that dropped him back through the field.

Race 3
The final Pro class race proved once again how crucial good, clean starts are in Enduro-X, and thus time around it was Price who was the beneficiary. Brown, confident he had the round win secured, rode conservatively and allowed Price to hold his lead.

With fatigue coming into play, mistakes became more common, and obstacles that riders were passing easily in the earlier races became more challenging. At the finish, Price was a comfortable winner ahead of Brown. A poor start from Ralston cropped him as low as ninth, a position from which the Yamaha privateer was unable to recover.

Stefan Granquist (Yamaha) made up for 8-7 results in the first two races with a smooth run in the third that saw him take the final podium position. Behind him, Hollis finished fourth, which was enough to secure the KTM Australian Enduro-X Nationals championship - by a mere six points - from Price.

"Winning the Enduro X is a great way to start the year and the perfect start to my relationship with CDR Yamaha," a relieved Hollis said at the end of racing.

"I hurt my wrist pretty bad in the first race and I didn't have the strength in it to race at 100% so I just had to do what I could. The team has been unreal and the atmosphere under the tent is so good. I'm really enjoying working with a great bunch of guys."

CDR Yamaha team owner, Craig Dack, gave praise to both his riders and the series: "The Enduro X series has been a great way to start the year.

"Chris has down an amazing job and has been a great addition to the team. He is a smart racer who knows how to get results and he deserved to win this championship."

Price was gracious in defeat, but given this series marked his first major competition since a potentially career ending spinal injury, he was grateful to still be racing.
"That's racing, that's how it goes. I can see that first race win coming, but it just hasn't happened yet. It was a great series, and I really enjoyed it. Dave and Colin did another amazing job and it's good to see those guys putting in the hard work. If they keep up the effort, something big's going to come of it."

Round-winner Brown praised the work done by Enduro-X organisers, Col and Dave Robbins and their team, as well as the support he received from Kearney and the Australian Husqvarna contingent.
"It was a good day today. I got some good starts, but crashed twice in the second race, but that's racing.

"These have been among the best Enduro-X tracks I've ridden. Today was great. This track had some elevation and a bit of everything - technical trials-y sections, but also the more wide open sections that you can race on. Being an ex-motocrosser, that was good for me.

"I'm really happy I was able to win today for Husqvarna. I'm very grateful to Jeff Leisk and the guys for getting me over here, and Glenn for looking after my bike."

With the KTM Australian Enduro-X Nationals concluded for 2014, teams are now turning their attention to the Australian Off Road Championship (AORC), which kicks off in Bulahdelah, NSW, on March 22-23.