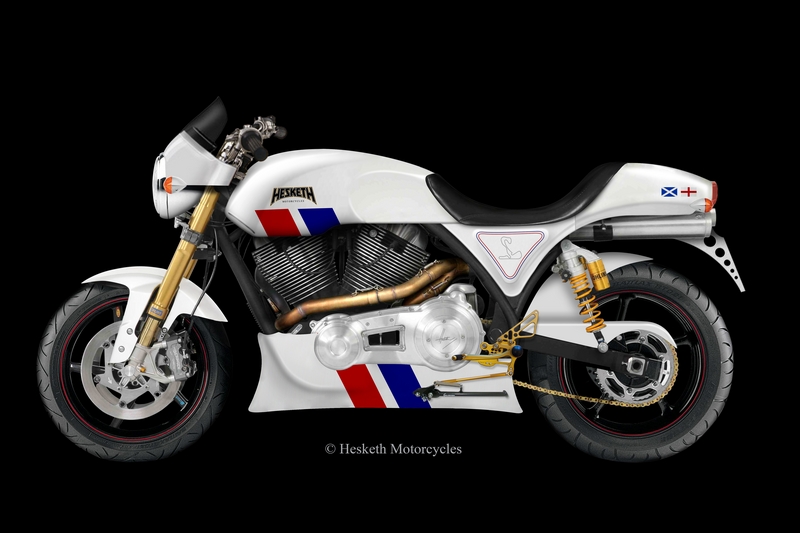 Under the leadership of new owner, Paul Sleeman, who took over the company in 2010, an all-new range of motorcycles are planned, spearheaded by the '24' sportsbike that will be released in February, 2014.

Tapping into Hesketh's motorcycle and, more specifically, Formula 1 racing heritage, the '24' takes its name from James Hunt's racing number, and a colour scheme inspired by the Hesketh Racing F1 cars from the early 1970s. Hunt, recently immortalised in the film 'Rush', drove for the F1 team created and funded by Lord Alexander Hesketh from 1973, securing the team's first victory in 1975, before joining McLaren for the 1976 season.

The new Hesketh 24 will be the first model released under Paul Sleeman's ownership and serves as a clear indication of the new direction of the brand.

"The design of the bike itself is centred around the big V-twin muscle at the heart of the bike, with overhead air intakes inside the 'tank' above and a 22.7 litre fuel cell mounted below the engine," Sleeman said.
"To stay true to some original Hesketh features, the front light offers a modern half cowl and the top tank follows the distinctive Hesketh shape.

"The Hesketh 24 is a nod to the F1 success of James Hunt and the Hesketh Racing team and we tried to incorporate this is in subtle touches, such as the small Scottish and English flags on the tail as seen on the original F1 24 car and the outline of the Zandvoort circuit that offered Hunt the famous 1975 victory.

"[After the 24] we will go on to develop and release a 2 seat version of this model shortly after," Sleeman added.

Hesketh Motorcycles will soon be moving from their current home in Kingswood, Surrey, to larger premises at nearby Redhill, allowing the team to better concentrate on the manufacture of the Hesketh 24 and future models.

Exhaust
Stainless steel 2 into 1 into 3