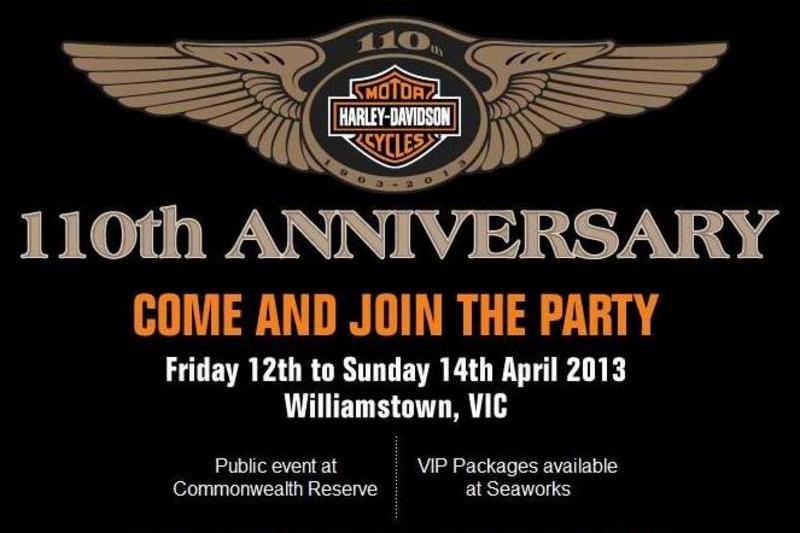 Australia gets its turn on April 12 - 14, 2013, when the '110th Anniversary Experience' arrives in Melbourne
Harley-Davidson celebrates its 110th Anniversary in 2013, but the party has already kicked off, with this week's European Bike Week in Austria hosting the first of what's set to be a year's worth of celebrations.

Australia gets its turn on April 12 - 14, 2013, when the '110th Anniversary Experience' arrives in Melbourne. A public event at Commonwealth Reserve, Williamstown will be the main event, with further details on exactly what will be happening, plus VIP packages, to be confirmed. Watch this space for further details.

Other stop-offs for the 110th Anniversary Experience include India, China, Brazil, South Africa, Malaysia and Mexico, with a special celebration planned for Rome, Italy on June 13 - 16. The Rome event will include a party in the Touristic Port of Ostia, two headlining concerts at the Stadio Olimpico, and a special bike blessing inside St. Peter's Square, Vatican City, by Pope Benedict XVI.

The expanded celebration in Milwaukee over the US Labor Day weekend (Aug 29 - Sep 1) in 2013 will include rides organized by fans, a celebration at the world-renowned Henry Maier Festival Park, a massive parade through downtown Milwaukee, activities at the Harley-Davidson Museum and three headlining concerts.

"The 110th Anniversary will be the biggest in our history, celebrated by fans at events on almost every continent on the planet over the course of an entire year," said Mark-Hans Richer, Harley-Davidson Chief Marketing Officer.

"This is more than an Anniversary event - it's an epic celebration of the freedom that unites us all, and we invite everyone around the world to join in."

Harley-Davidson fans are invited to join the celebration events online, where they can share videos, images and experiences on Facebook, Twitter, and at www.h-d.com/110. The website, which will remain live through 2013, will feature details about all of the Motor Company's 110th Anniversary events, as well as content posted from fans around the world.