A few months shy of its 65th birthday, the Harley-Davidson Sportster has been reborn. Switching from an air-cooled to liquid-cooled engine, there’s also a new frame, new styling, new instrumentation and an abundance – for a Sportster – of rider-assistance technologies. About the only thing that the new and old Sportsters share is the name! 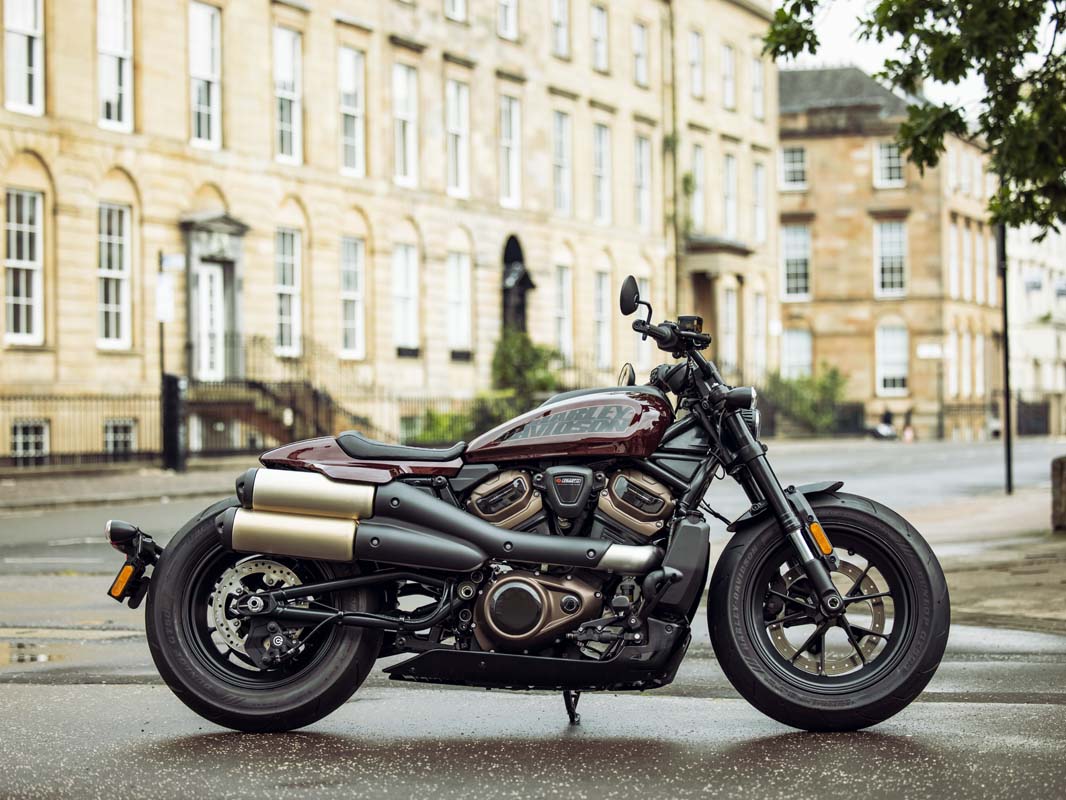 Launched in the US in July, with North American sales due to commence shortly and Australia/New Zealand release before the end of the year, the new Sportster will arrive in one model variant initially, the Sportster ‘S’, but several spin-off variants are likely to be added. 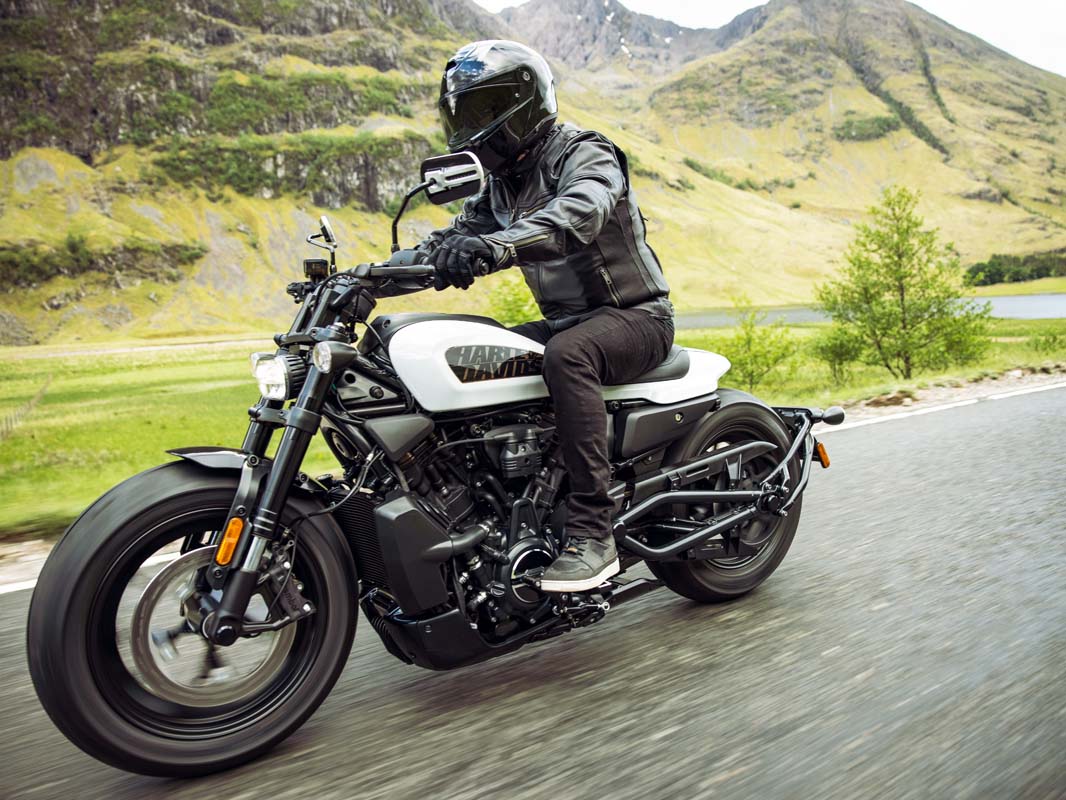 The new Sportster is itself a spin-off – of sorts – in that it uses the same ‘Revolution Max’ platform as the Pan America 1250 adventure tourer that was launched earlier this year.

“The Sportster S is the next all-new motorcycle built on the Revolution Max platform and sets a new performance standard for the Sportster line,” said Jochen Zeitz, Chairman, President and CEO, Harley-Davidson.

“This is a next generation Sportster defined by power, performance, technology and style. And it’s part of our commitment to introduce motorcycles that align with our strategy to increase desirability and to drive the legacy of Harley-Davidson.”

The imminent arrival of the new Sportster means the old model is about to be consigned to the history books. And while many will mourn the passing of the air-cooled Sportster, its demise was necessary, as the Evo engine no longer meets emission standards in several global markets, thus limiting Harley’s potential for growth in those markets.

Sportster – to the Max

Defined by a liquid-cooled 1250cc v-twin engine of the same name, the Revolution Max platform has been in development for years, but is only now seeing the light of day. When it was first revealed in 2018, the Revolution Max engine sat in three prototype/concept motorcycles – the ‘Pan America,’ ‘Bronx’ and ‘Custom 1250’ – with a mix of 1250cc and 875cc capacities.

From those prototypes, the Pan America has come to market virtually unaltered, while the streetfighter-style 975cc Bronx was shelved following Harley-Davidson’s management shake-up. The drag bike-style Custom 1250 sat in the ‘will they, won’t they?’ space for a while before being confirmed for production late last year.

Spotting the similarities between the Revolution Max in 975cc and 1250cc form and the old Evolution engine in 883cc and 1200cc form, some may have guessed that the new engine might be applied to a new generation of Sportsters, but it was only with the final preview – and its tagline of ‘From Evolution to Revolution’ – that it became clear that a new Sportster was coming and its rebirth would cover much more than just the engine.

The Revolution Max 1250 serves as a stressed member for a new frame, which along with special materials and manufacturing techniques in the engine itself, has reduced overall weight by 28kg compared to the current Sporter Iron 1200.

With the new frame comes a new stance that Harley calls “crouched and powerful”. Styling of the tail, mudguards and fuel tank complements this stance, but the trade off is a fuel tank that’s only 11.8 litres in capacity – that’s even less than the 12.5-litre Peanut tank on the current Sportster.

Seat height is 753mm, which is similar to the current Sportster range, with forward controls and a drag-style handlebar both standard fitment.

The other trade off with the low-slung look is reduced travel – just 51mm – from the monoshock rear suspension. Travel from the 43mm front suspension is 92mm, with full adjustability at both ends.

The all-new look for the next-generation Sportster most closely resembles the current Softail Fat Bob 114, but you can see elements of other Harleys in the styling, from the FXDR 114 to the XR1200 and even the old XR750 flat tracker, especially with its high-mount pipes.

In terms of technology, the new Sportster is streets ahead of the old one, with the analogue instrumentation replaced by a colour TFT screen that can also run your music playlist, manage phone calls and display navigation instructions.

Rider assistance and safety tech on the Sportster no longer starts and finishes with ABS. There’s now ABS, Traction Control and Drag-Torque Slip Control, all “Cornering Enhanced” and controlled by a 6-axis IMU.

At the heart of the new Sportster is the Revolution Max engine. While of the same 1250cc capacity and 60-degree v-twin configuration as the unit used in the Pan America 1250, the liquid-cooled DOHC 8-valve v-twin has been tuned in the Sportster S to make it torque-rich – in the best Sportster tradition. That explains why it’s referred to as the Revolution Max 1250T in this application – ‘T’ for ‘Torque’.

Compared to the RevMax in the Pan America, the engine in the Sportster S features smaller valves and ports, along with a different combustion chamber shape and piston crowns to deliver more torque at low and mid RPM – up by a claimed 10 per cent from 3000 to 6000rpm.

Modified velocity stacks and airbox volume, along with revised camshaft profiles and variable valve timing are other differences designed to maximise that low-end torque.

Compared to the Pan America’s 112kW at 8750rpm, the Sportster S produces 90kW at 7500rpm. Maximum torque is unchanged at 127Nm, but it’s reached earlier in the rev range on the Sportster S – 6000rpm, instead of 6750rpm. Against the outgoing Sportster Iron 1200 and its 49kW (estimated) and 99Nm, those maximums look even better.

With the Revolution Max 1250T serving as a stressed member – front, mid and tail frame sections bolt to the engine - it makes the overall chassis stiffer while reducing weight. Significantly lighter than the models it’ll be replacing, the Sportster S’s listed wet weight is 228kg, while the current Sporter Iron 1200 tips the scales at 256kg.

While the Evo engine was known for its vibration, even with rubber engine mounts, the RevMax uses two internal balancers to eliminate most – but not all – engine vibration, with Harley saying the balancers have been tuned to deliver just enough shake to make the Sportster S feel “alive”.

A six-speed transmission with slip-assist clutch is as per the set-up on the Pan America, but instead of that model’s chain final drive, the Sportster S uses belt drive.

Reflecting the major modernisation of the drivetrain, the Sportster instrumentation has been modernised, too, with the old analogue gauge with LCD insert replaced by a fully digital unit.

The circular 4.0-inch TFT screen is actually similar to the unit used in the new Indian Chiefs, with a radial tacho enclosing a large speedo display, along with odometer, fuel level and gear position displays. Other less pertinent data, like clock and Bluetooth connection, is positioned below, with warning light and indicator displays above.

Display information can be adjusted via the switchgear, while a Bluetooth-compatible smartphone can turn the instrument pod into an infotainment hub and call centre, but a Bluetooth headset and headphones are required.

The screen can display navigation instructions, too, via smartphone and a dedicated Harley-Davidson app. Once enabled, the app allows a choice of moving map or turn-by-turn displays, with the switchgear allowing pan and zoom on the map.

Other features available through the app (that automatically updates once downloaded) include recommended rides, ride planning and recording, as well as identification of nearby service stations, hotels, restaurants and even Harley-Davidson dealerships.

Sportsters have always been pretty bare on the tech front, but that’s changed with the Sportster S. Rider assistance technology is impressive, lighting is all LED and there are five selectable riding modes.

The new Sportster’s six-axis IMU measures the bike’s performance – when upright or in a turn - and adjusts throttle response, available power and intervention of the other electronic aids.

Other standard assistance tech includes cruise control and a tyre pressure monitoring system, while the lighting is fully LED, including a Harley Daymaker headlight similar to that employed on the latest Fat Bob 114.

Riding modes are a new thing for the Sportster but something that’s becoming the norm on road bikes nowadays. The Sportster S comes with five modes: three pre-set and two customisable.

The all-new Harley-Davidson Sportster S is due for Australian and New Zealand release before the end of 2021.

While only one spec level is available for now, a range of add-ons will be available from launch, including a mid-mount conversion kit for the pegs and pedals, a ‘Sundowner’ solo seat, pillion kit, windshield, tailbag and the usual cosmetic extras from the Harley-Davidson Genuine Motor Parts & Accessories catalogue.