Harley-Davidson have launched a new addition to their range in the Nightster. While it revives a Sportster model name from the recent past and takes styling cues from the old, air-cooled Sportster family, the Nightster is a modern machine in every other respect. 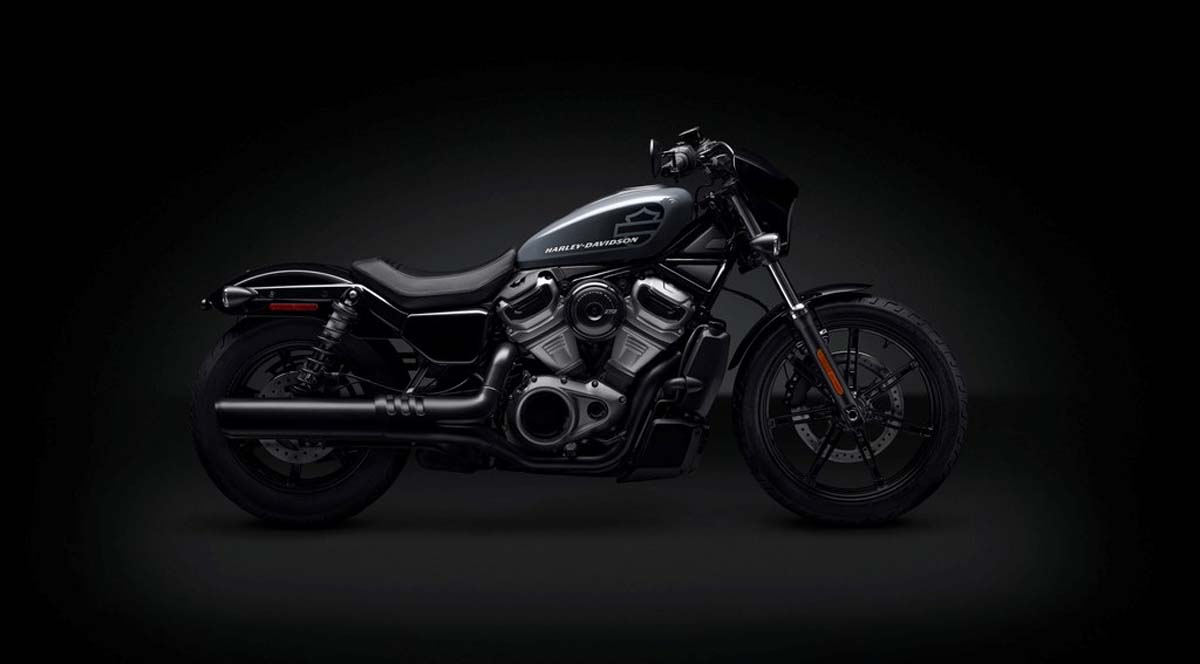 Running a 975cc version of the liquid-cooled Revolution Max v-twin engine used in the new Sportster S, the Nightster is believed to take the place of the aborted Bronx streetfighter in Harley’s lineup, while also serving as a more affordable entry point into the new Sportster range, undercutting the Sportster S by around $2,500.

“The Nightster is an instrument of expression and exploration, underpinned by performance,” said Jochen Zeitz, Chairman, President and CEO of Harley-Davidson in launching the new model on 12 April.

“By building on the 65-year Sportster legacy, the Nightster provides a canvas for creativity and personalisation, offering the ultimate platform for customisation and expression for new and existing riders.”

The ‘Nightster’ name dates back to 2007 and was first applied to a variant of the XL 1200 Sportster. What defined the XL 1200N (‘N’ for ‘Nightster’) was its blackout treatment of selected engine and cycle parts, like the rims and hubs, forks, triple trees and handlebars. Compared to what was to come from The Motor Company (and other brands) in the future, it was pretty tame, but the blackout touch gave the Nightster a distinctive look at the time.

Bobbed mudguards, a side-mount number plate, mid-mount pegs and a one-piece, ultra-low saddle were other features.

Being based on the Sportster 1200, the Nightster’s engine was the same 1199cc air-cooled Evolution v-twin fitted to all big Sportsters in 2007. Fuel injection had been introduced to the EVO engine that year, with improvements in other areas including a better front brake, reduced clutch lever effort and stronger belts.

Positive customer response to the original Nightster soon saw the "night" treatment applied to models outside the Sportster family, leading to the Softail Night Train and V-Rod Night Rod Special, with others given blackout finishes under the “Dark Custom” banner. The Nightster itself stayed in the H-D catalogue until 2012.

While the all-new Sportster S unveiled last year is a very modern machine in its appearance, the new Nightster’s styling pays homage to recent air-cooled 883 and 1200 Sportsters.

Narrow seven-spoke wheels are reminiscent of those on the last air-cooled Sportsters, while their 19-inch front, 16-inch rear combination is another nod to Sportster tradition.

The 2-into-1 exhaust system is a design touch that’s new to Sportsters, as are shrouds for the radiator and a bellypan that's actually a cover for the battery that sits ahead of the engine.

What looks like a reshaped oil tank is actually the Nightster’s fuel tank, while the “tank” atop the engine is essentially a hollow steel shell covering the air intake. Of 11.7-litre capacity and made from plastic, the actual fuel tank is filled from a cap under the seat.

While the new fuel tank/airbox configuration is a major break with Sportster tradition, and one that may not resonate with Sportster purists, it’s one that lowers the centre of gravity and improves handling, according to Harley-Davidson.

Like the new Sportster S, the Nightster runs Harley-Davidson’s Revolution Max (aka RevMax) liquid-cooled v-twin, but at a smaller capacity of 975cc, instead of 1252cc, achieved through a narrower bore and shorter stroke.

Dubbed the ‘Revolution Max 975T,’ this 60-degree v-twin delivers strong acceleration and robust power through the mid-range, according to Harley-Davidson, with a flat torque curve and componentry designed to maximise performance across the entire speed range.

The 975T benefits from all the goodies already applied to the larger version of this engine, like double overhead cams and variable valve timing with hydraulic valve lash adjustment, resulting in listed maximums of 67kW (90hp) at 7500rpm and 95Nm (70lb/ft) at 5000rpm.

For the record, that’s almost double the power and 30 per cent more torque than what the 883 EVO put out. Compared to the 1200 EVO, the 975T delivers 30 per cent more power, but around the same amount of torque. More importantly, the 975T achieves its numbers in a bike that’s significantly lighter than the old air-cooled Sportster.

Internal balancers in the engine reduce most, but not all, vibration, with some shake deliberately engineered in to “make the motorcycle feel alive,” according to Harley-Davidson.

Matched to a six-speed transmission with traditional belt final drive, the RevMax 975T serves as a stressed member of the Nightster’s frame, which is made from high-strength steel, as is the swingarm.

Using the engine as a stressed member contributes significantly to a reduction in overall weight and is said to deliver a very stiff chassis for nimble handling and sporty riding.

Listed weight of 218kg (wet) is significantly below that of the air-cooled 1200 Sportster, which was around 250+kg, while the 705mm seat height will suit a wide range of riders.

Out of the crate, the Nightster comes as a solo, but a pillion pad and pegs, along with plenty of other bolt-on accessories, are available through the Genuine P&A catalogue, including themed accessories under the ‘Adversary Collection’ and ’66 Collection’.

Keeping the classic Sportster vibe going, the Nightster’s instrumentation is deliberately old school, comprising a circular analogue speedo, although this does add an LCD insert screen with fuel level, odometer, riding modes and other information, as well as the usual array of warning lights.

Nightster suspension consists of a conventional 41mm Showa fork and dual rear coilover shocks, with preload adjustability at the rear and listed travel of 114mm front and 76.2mm rear.

For the brakes, there’s a single 320mm disc with a four-piston Brembo caliper at the front and 260mm rear disc with a single-piston caliper. ABS is standard, as part of the Nightster’s impressive technical package.

To match the modern, liquid-cooled engine, tech features on the Nightster are just as modern and a world away from anything offered on the air-cooled Sportster.

Along with ABS, Harley’s own Traction Control System (TCS) and Drag-Torque Slip Control System (DSCS) engine braking are standard, as part of the ‘Rider Safety Enhancements by Harley-Davidson’ package. ABS is of the two-channel type and is switchable on the rear. TCS is switchable, too.

Finally, all the Nightster’s lighting is LED, including the indicators, with a Daymaker headlamp fitted as standard.

Available colours for the Nightster include Vivid Black, Gunship Grey and Redline Red. In the latter two, colour is only applied to the fuel tank/airbox only, with everything else in black or grey.

Australian delivery of the 2022 Nightster started in April, with pricing at $23,995 ($24,300 for Gunship Grey and Redline Red). That’s around $4,000 more than the most expensive of the old air-cooled Sportsters from 2021, but you could argue that the new Nightster is providing a lot more bike for your money, too.

See your Harley-Davidson dealer for details.