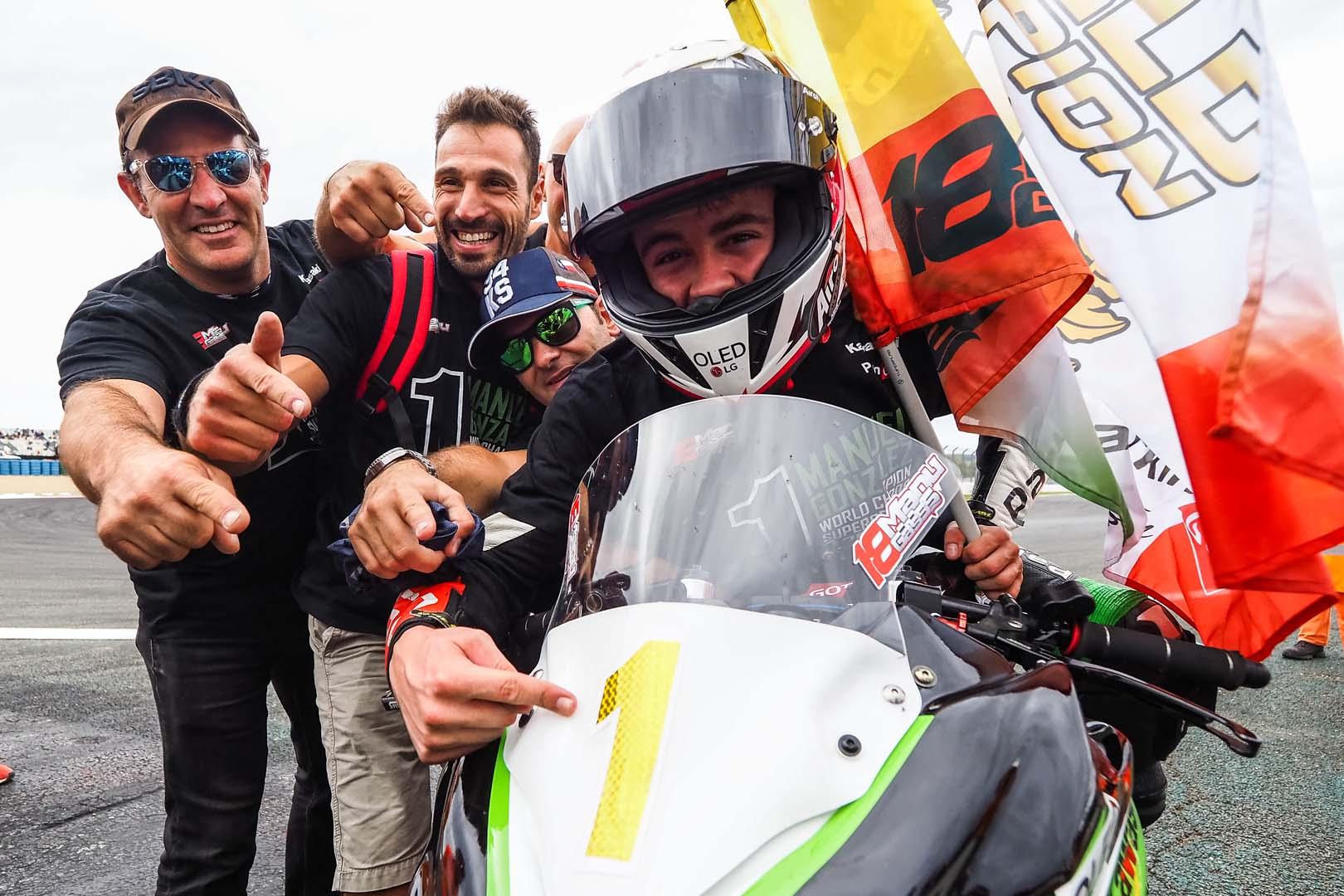 After last year’s FIM World Supersport 300 (WSS300) Championship went down to the wire, this year’s was concluded much sooner, with Manuel Gonzalez rewarded early for his season-long consistency.

Riding for Kawasaki ParkinGO and in his second full season in the championship, the 17-year-old from Madrid secured the 2019 title at the Magny Cours round in September with a round in hand.

After winning this year’s season opener at Aragon, Gonzalez repeated the feat at Assen, then followed up with a fourth and first in the double-header at Jerez. A runner-up finish at Misano was followed by a withdrawal from the Donington round with injury, but it still meant that Gonzalez came to the Portimao round with his first chance to secure the title.

Despite qualifying on pole, Gonzalez had to battle with 2018 WSS300 championship runner-up Scott Deroue (Kawasaki Motoport) for much of the race, the pair swapping for the lead until Deroue prevailed. Still, Gonzalez left Portimao with a 38-point championship lead and only needed to finish fourth or better at Magny Cours, regardless of Deroue’s placing, to claim the championship.

Gonzalez made that task much harder with a lowly 15th in qualifying, while Deroue was on pole and 2018 champion Ana Carrasco (Kawasaki Provec) was also on the front row.

In a frantic 12-lap race, Gonzalez led only briefly, as first Andy Verdoia (BCD Yamaha MS Racing), then Carrasco had the upper hand. When the chequered flag came out, Carrasco was first across the line, with less than a second covering the first four finishers. Gonzalez was second with Deroue behind him, which meant the Spanish teenager was the new World Supersport 300 champion.

While his race wins obviously propelled him to the championship, Gonzalez says there’s more to it than that.

“You also need a bit of luck and that ability to think where you need to be at the right moment. With these bikes, we can be five riders crossing the line in just a tenth of a second. That point where luck and strategies combine is when you can win.”

At 17 years and 1 month, Gonzalez is the youngest ever rider to win a road racing world championship; younger than Marc Marquez when he won his 125cc title at 17 years 8 months. This follows a string of ‘firsts’ for Gonzalez that includes being the youngest WSS300 podium finisher, at 15, and youngest pole setter, then race winner, while still 16 earlier this year. Gonzalez has also set a season points record for the class, with one round still to go.

At time of writing, Gonzalez had yet to reveal whether he would stay in WSS300 in 2020 or move up to World Supersport. Should he do the latter, he’ll have several years up his sleeve to attempt to be the youngest champion in that category. The bar currently stands at 21, which was the age of our own Chris Vermeulen when he won that championship in 2003.

While he would be happy to stay in WSS300 in the short term, Gonzalez does have goals to reach the big league: “I would like to race in World Superbike or MotoGP, which is the best thing that could happen to me, but for now I just want to do the best I can and not think of what the next years will bring.” 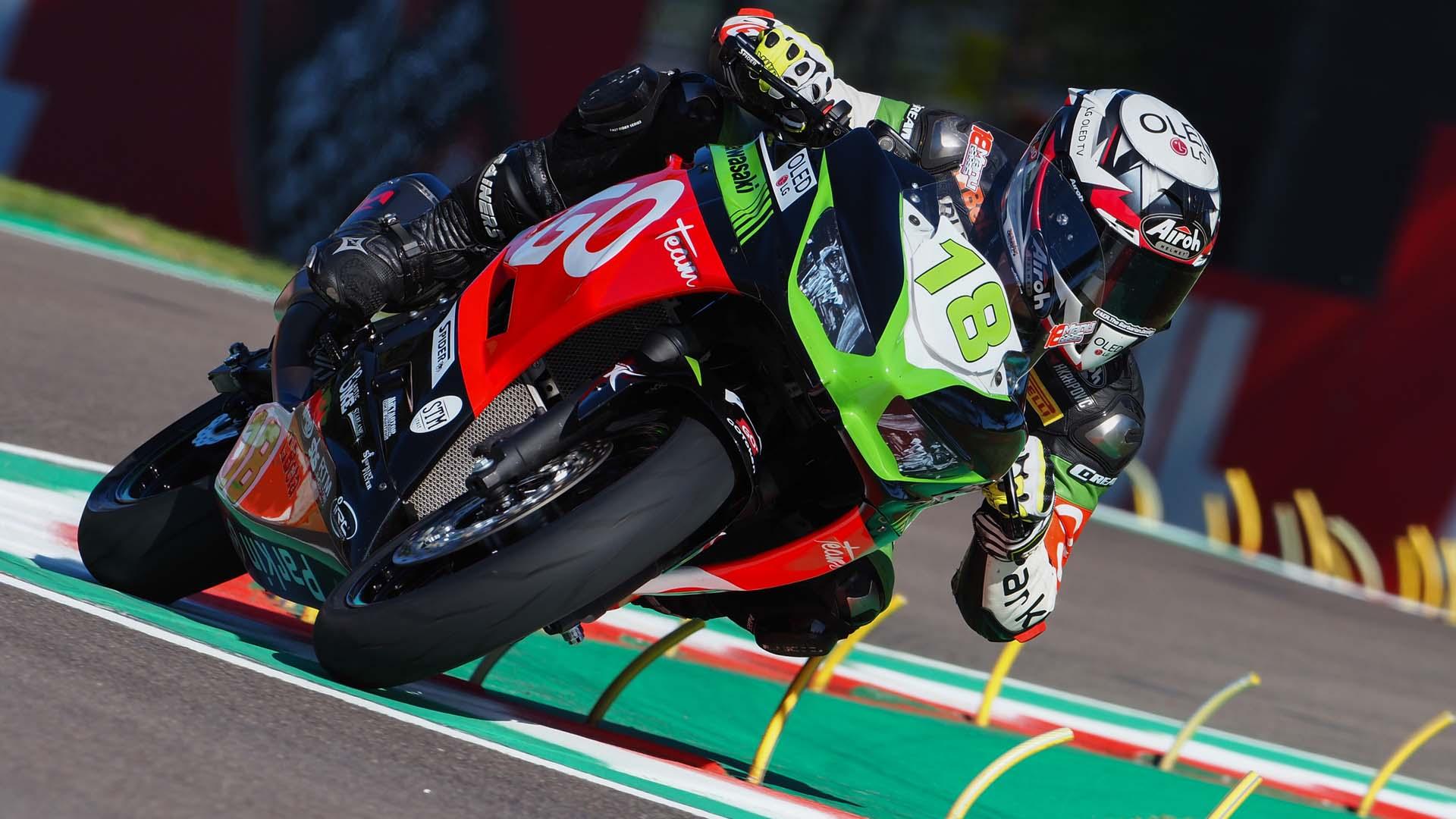 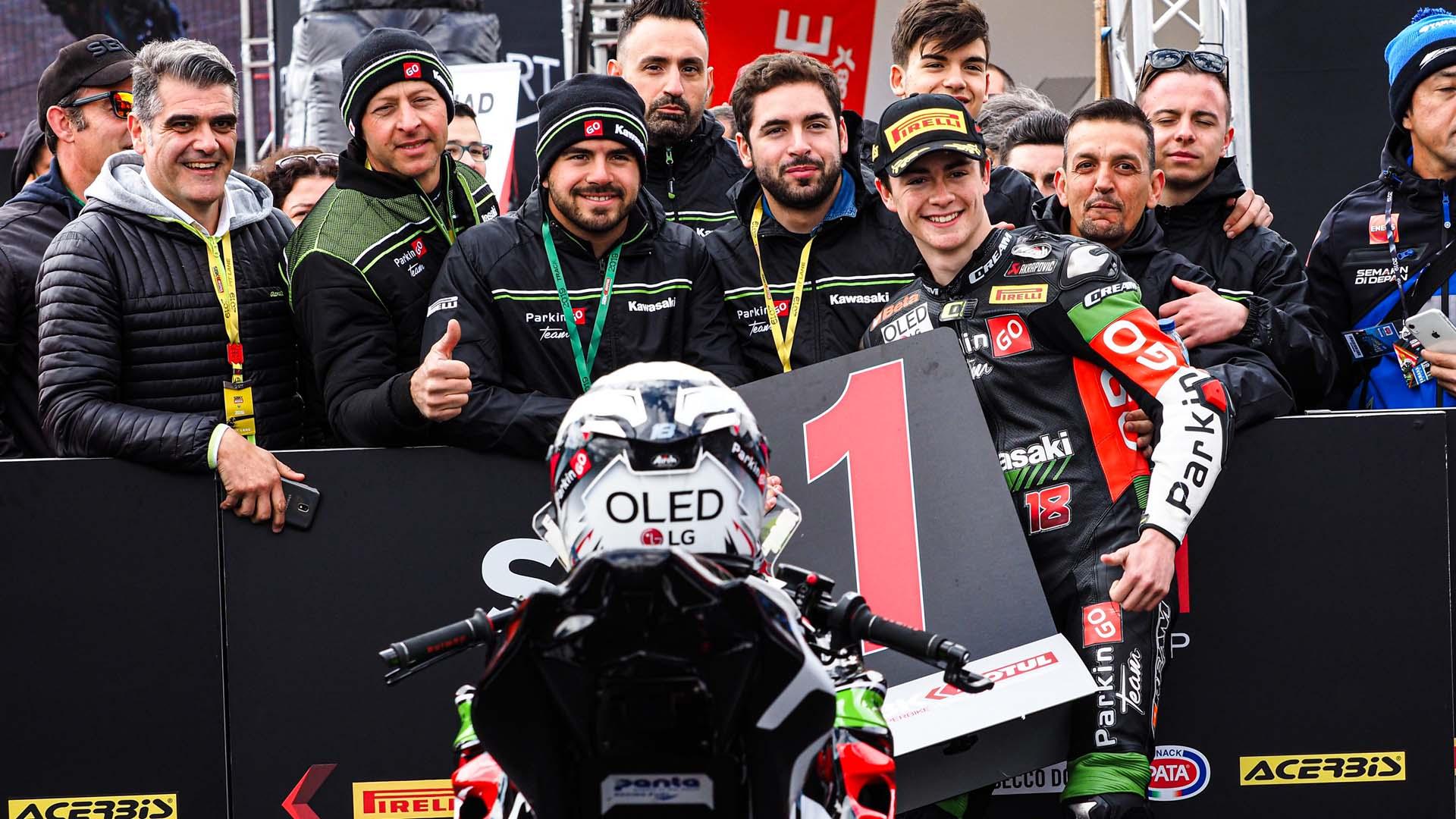 Riding for Kawasaki ParkinGO in his second year in the championship, Edwards showed strong pace at various rounds, secured points at Jerez and Portimao, and a best placing of ninth at Jerez’s Race 2, but a series of retirements plagued his season.

For Bramich (Carl Cox-RT Motorsports by SKM Kawasaki), it was a similar story in his debut year in the category. The highlight to date was a tenth place at Donington, contrasted by retirements and rear-of-field finishes in other races. At Magny Cours, a crash in practise left the 22-year-old with a fractured elbow,

Ahead of the final WSS300 round for 2019 at Qatar (after this issue of JUST BIKES went to press), Edwards was in 18th place in the championship and Bramich 30th. 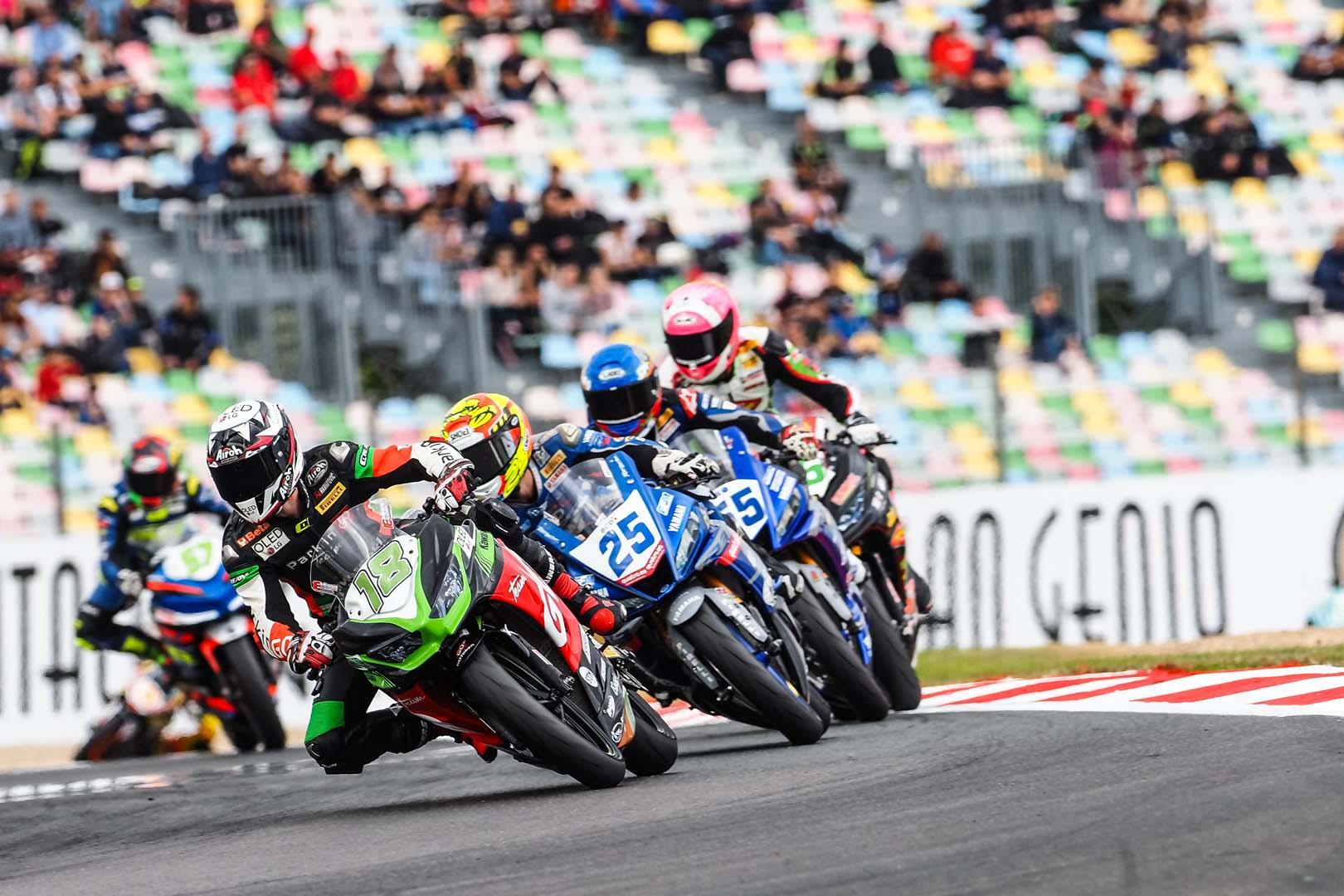 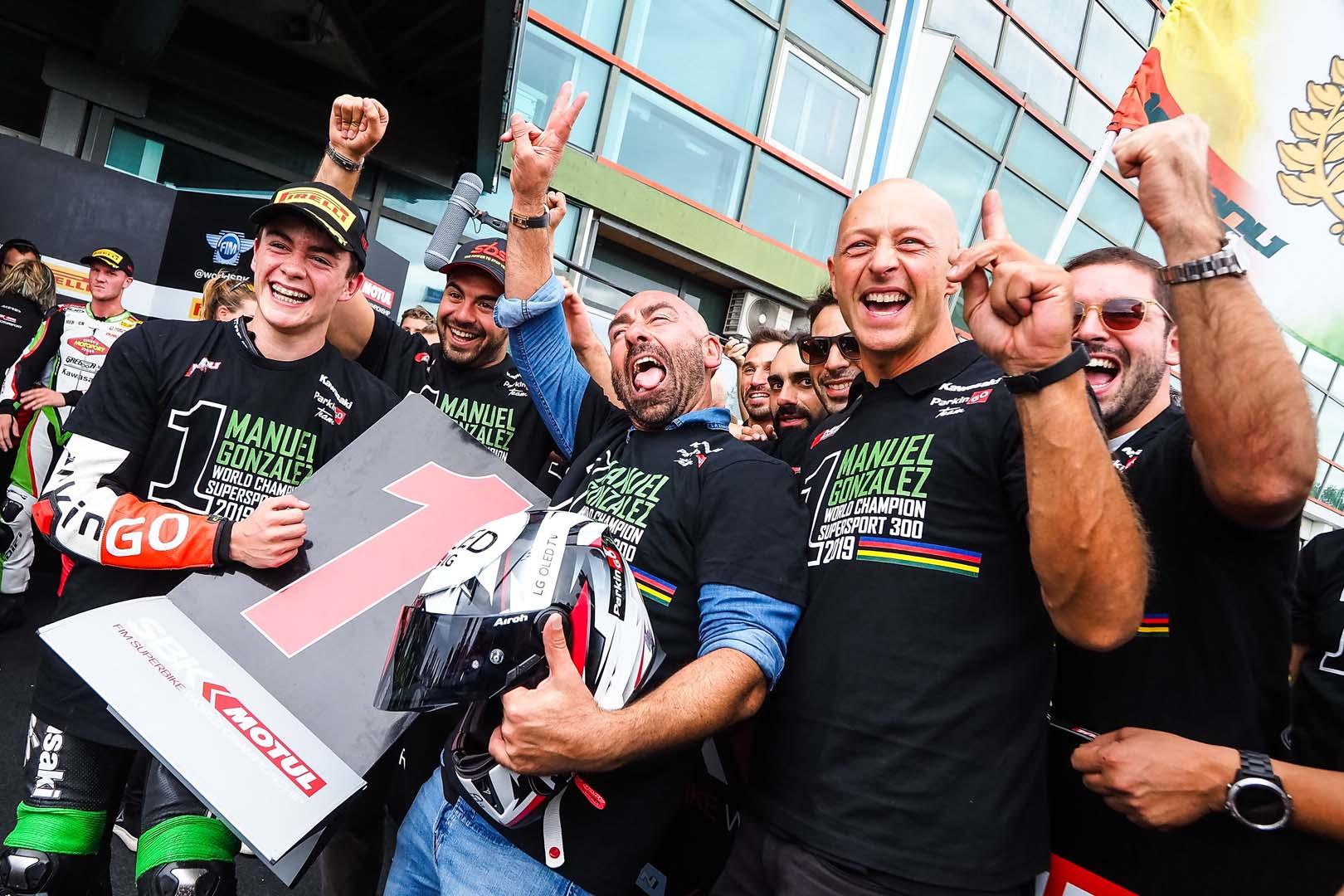 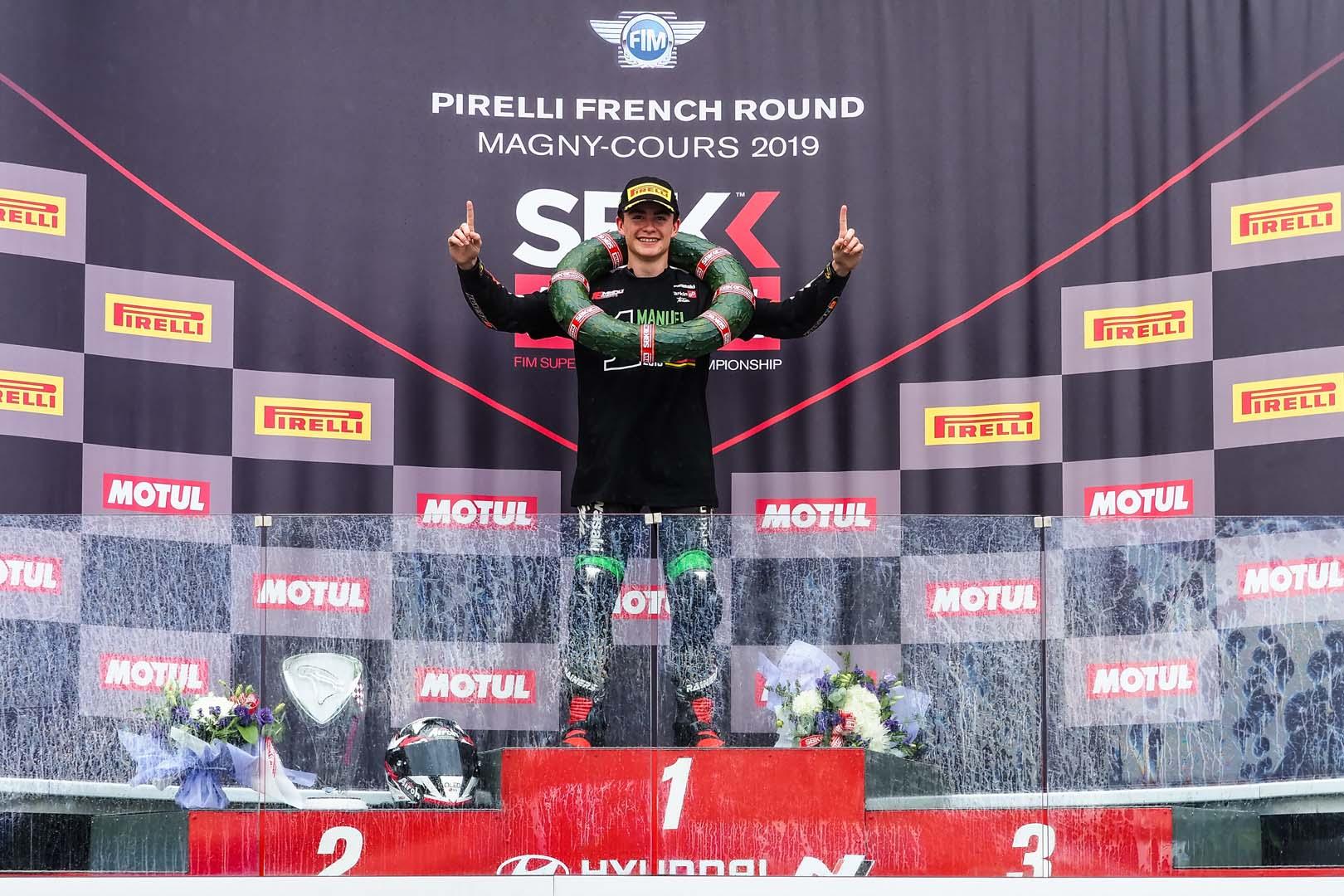