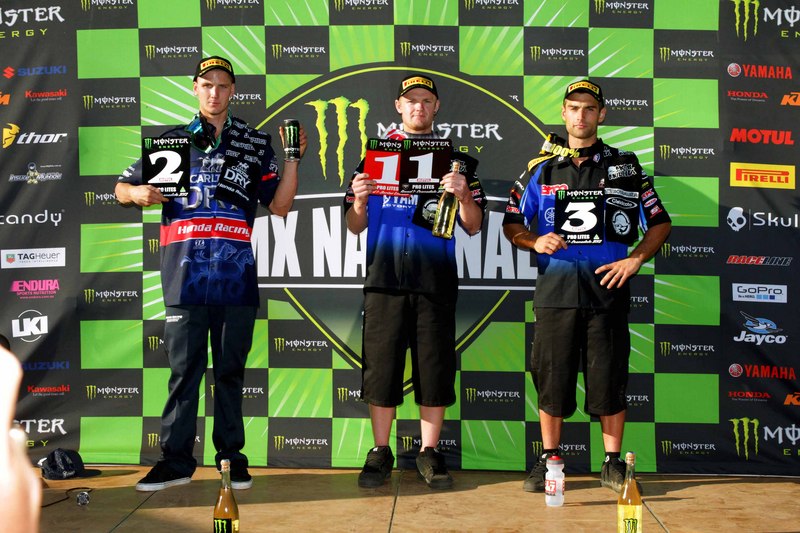 Ford Dale (Carlton Dry Honda Thor Racing), won the opening two back-to-back motos convincingly in a spectacular start to his season. The Sunshine Coast local was on track for a round win of similar dominance to MX1 team mate Townley before a crash in the third and final moto hindered his assault and he was forced to settle for ninth in the moto.

Dale's fall opened the door for Serco Yamaha Metal Mulisha Racing's Kirk Gibbs, who took out the final moto win, and the overall round victory by a single point over Dale thanks to consistent results in the earlier motos. Gibbs finished second in moto one and fifth in the second. The South Australian was stoked with the result to open his account for the season.

"It's a great way to start the season and consistency paid off today," Gibbs said. "I have been working hard and the Serco Yamaha Metal Mulisha Racing team has been as well. I couldn't be happier and can't wait to keep the ball rolling."

Gibbs's team mate, Luke Styke, put in a similarly consistent performance to finsih the opening round in third overall, but only by a single point ahead of Josh Cachia (JDR/KTM Factory Racing) and Adam Monea (Zero Seven Suzuki).

The Pirelli MXD Under 19s category saw a number of newcomers rise to the occasion in Queensland, with Choice Motorsports KTM's Dylan Long taking out the round win ahead of fellow KTM rider Kayne Lamont and GYTR Yamaha's Sam Martin.

Moto one was taken out by Long before Kiwi contender Lamont upstaged him in the second, and then the third moto saw Long take the win to go on and capture the overall round win for the weekend.

"It's awesome, the Choice Motorsports KTM team backed me all the way to get the win," Long said. "I finished the day strong and that allowed me to take the overall win. I just want to finish as close to the front that I can the whole season and hopefully it will end up good."

The series will continue at Coonabarabran, New South Wales, in a two-day event on 14-15 April.