For a small investment, Motobatt’s jump starter can pay for itself many times over. 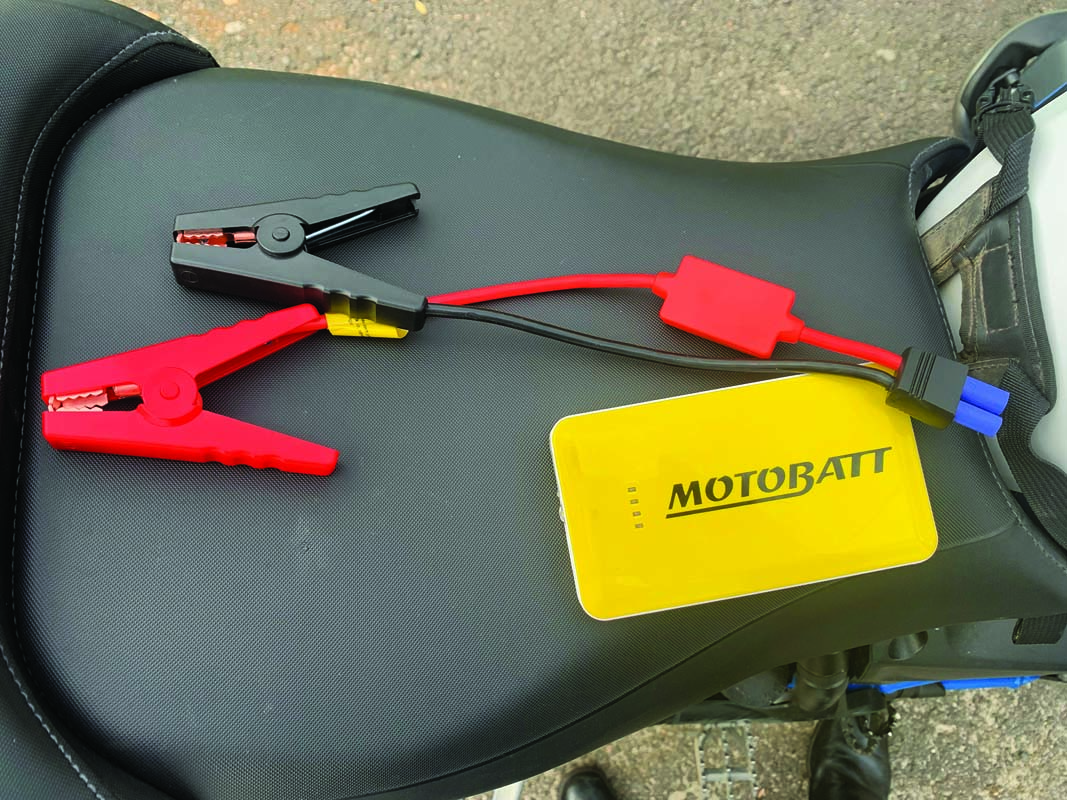 Remember when we used to compare objects to a packet of cigarettes to give an idea of their size? Nowadays, comparisons with mobile phones are more common, and in the case of the Motobatt lithium jump starter 7500, it’s a very appropriate comparison, as this multi-function power supply unit is virtually identical in all dimensions – and weight – to a modern mobile phone.

For motorcyclists, the Motobatt’s compact size is a real plus, but for a jump starter that claims to be able to start almost any 12V vehicle, even commercial vehicles and large SUVs, its size is downright remarkable.

The Motobatt lithium jump starter 7500 I’ve had for the past couple of months comes with everything you need to jump start vehicles and charge smaller devices like tablets and phones, including cabling to charge the power supply unit itself, either at home or from a vehicle’s 12V port.

The jump starter pack I’ve been using came with the following:-

The lithium power supply unit weighs just 225 grams, has built in overcharge/overdischarge protection and can operate in temperature extremes from -20 to +60 degrees Celsius. It also has a built-in LED torch with strobe and SOS function.

Using a household plug, the Motobatt’s power supply unit can be charged in around two hours and holds that charge for a very long time, but could it jump start a motorcycle and other vehicles as claimed?

I must admit that, based on its size, I was sceptical as to what the Motobatt could deliver, especially as my last jump starter was the size of a small esky. But I was proven wrong.

Recently, I’d hardwired a traffic camera into my BMW R1200GS Adventure. Thanks to the wife switching off the trickle charger I’d hooked up to the bike, when I was ready for a weekend ride, the bike wasn’t - the battery was dead flat and the trickle charger dead, too. At the same time, my daughter had managed to flatten the battery in her car.

Motobatt came to the rescue. For a compact unit, it has a whole lot of power and had both of us up and running in no time.

I’ve yet to test its ability in juicing up phones and other mobile devices, but I can’t fault the Motobatt’s performance on two- and four-wheel transport.

There are some clever design features, like the offset jumper lead length that minimises the chance of the clamps touching and shorting, but are still long enough to reach the terminals. That built-in torch is a winner, too, but what swung me was the performance and compact size. I now keep one with my R1200GS and recently bought a second one for my daughter.

Flat batteries screw up plans. With a Motobatt, they won’t screw up yours.

Available from motorcycle accessory retailers, the Motobatt lithium jump starter 7500 is priced from around $115.00 RRP. Prices vary, so shop around.