Compact and easy to use, the Kenwood STZ-RF200WD MotoCam delivers impressive results.

I’ve tried a few dash cams of late and the STZ-RF200WD MotoCam from Kenwood is one of the most interesting and innovative.

Kenwood are billing their MotoCam as being developed specifically for motorcycle use, which means it can also be employed on ATVs and Side by Sides. What I wasn’t expecting was the MotoCam is suitable for jetskis, too. 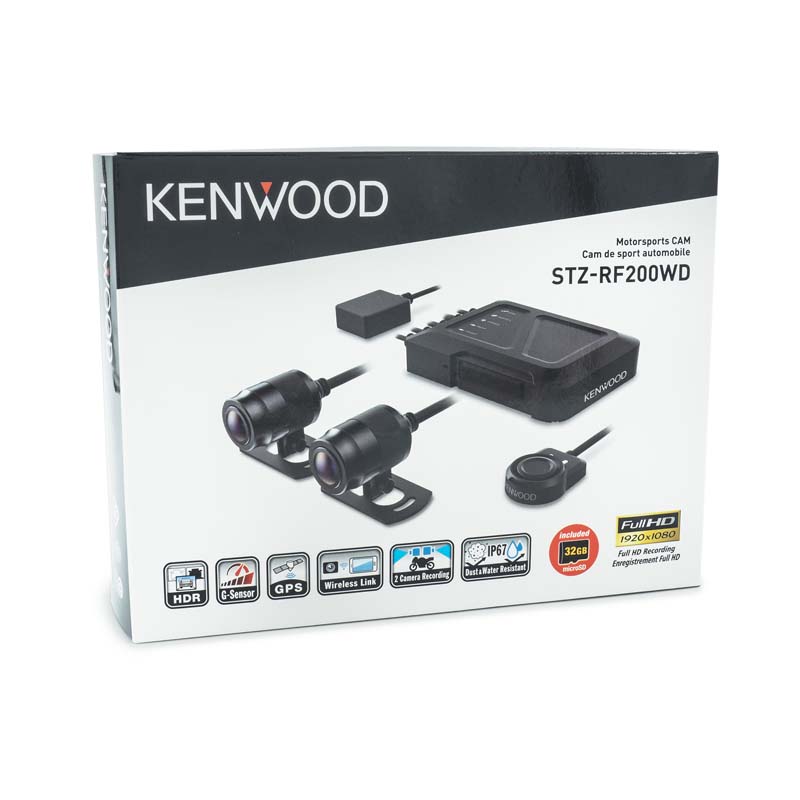 The MotoCam package consists of two cameras, a control box, GPS antenna, activation switch and related cables. All bar the control box are IP66/67 rated to prevent dust and water ingress, so you can get them wet. The control box is IP55 rated and small enough to mount under your motorcycle’s seat.

The cameras, GPS antenna and switch all feature adhesive backing pads for easy placement on your bike. The cameras also feature mounting brackets that can be rotated and tilted (with an included allen key) and even bent to fit curved shapes, but if you were planning on using the MotoCam constantly, cable-ties or bolts may be the better attachment option, as the adhesive pads will lose their tackiness over time.

Installing the MotoCam is quite simple. There’s enough cabling to reach all the components, and you don’t need to be an automotive electrician (luckily for me!), as everything’s either plug-in or connects via integral loops.

The main unit is equipped with a 3-axis G-sensor that’s designed to detect a collision, which means it needs to be firmly mounted so the sensor doesn’t give false readings, while the GPS antenna needs to be mounted somewhere external on the bike for optimal signal strength.

After checking that the cables weren’t running near hot engine parts, and things like suspension travel and steering movement wouldn’t pinch them, I had all components installed. I also wrapped sections of the cabling in fleece tape used for wiring looms – not essential, but it added that professional touch.

The two cameras in the MotoCam system are remarkably compact (see photos), but for their size, they’re packed with impressive features, including a 195-degree diagonal field of view, High Dynamic Range for superior recording quality in mixed light conditions and Electronic Image Stabilisation that compensates for camera shake to deliver a sharper, clearer image.

While designed for video footage at full HD (1920x1080) resolution, the cameras can also be used to capture still images, too.

It's important to mount the cameras on a part of the bike that isn’t subject to a lot of vibration, though, as this can compromise the EIS effectiveness.

With everything installed and set-up via Wi-Fi with the Kenwood motorsports camera app, I was ready to go.

Once installed, the MotoCam is recording from the moment you start-up the bike. A blue light on the switch shows the unit has power, while pressing and holding the switch until an orange light displays allows preferences and settings, like camera angle and recording modes, to be viewed and adjusted via your smartphone.

The control unit records on a Micro SD card that’s easy to access, and while a 32GB card is included, it can take up to 250GB.

The GPS antenna records latitude, longitude and speed, which may be contentious, but in an accident, could be crucial in apportioning blame, too.

Upon reviewing the footage after my first ride with the MotoCam, I was impressed with the clarity from the cameras and their wide field of view. Number plates could be read easily and all files are date and time stamped. There’s also sound, which is something I wasn’t expecting.

If you’re serious about capturing adventure rides and trackday fun, or you just want that extra piece of mind on the road that a dash cam delivers, then the Kenwood STZ-RF200WD MotoCam is recommended.

The Kenwood STZ-RF200WD MotoCam can be purchased from Kenwood retailers and other selected stockists. To see a demonstration video, go to kenwood.com/au/car/dashboard_camera/stz-rf200wd/