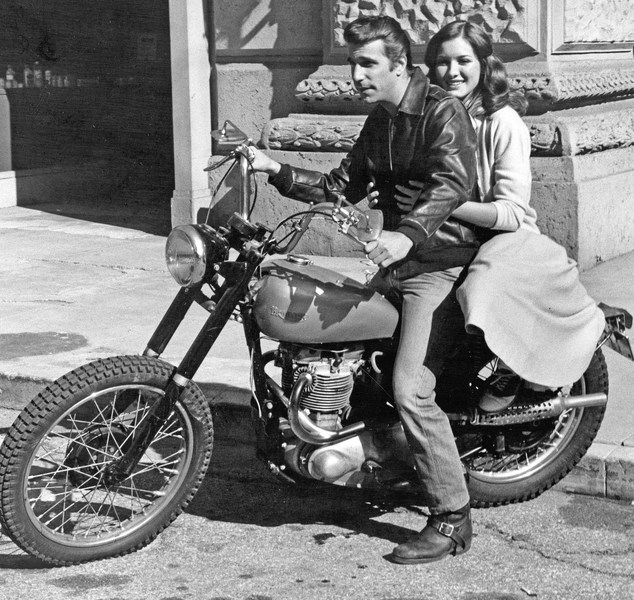 This now iconic emblem of American pop culture, originally created for the TV show by famous rider and stuntman, Bud Ekins, will be offered by Bonhams at their annual 'Classic California Sale', held November 12th, at the Petersen Automotive Museum in Los Angeles.

Happy Days aired for ten years from 1974 to 1984 and attracted millions of viewers each week. There's no doubt that at its peak, 'The Fonz' played by Henry Winkler, was one of the show's drawcards. Initially just a secondary character, Arthur Fonzarelli - known as 'The Fonz' and 'Fonzie' - became so popular with fans he was soon made a central figure of the show. Dressed in the stereotypical garb of 'The Wild Ones', the motorcycle-loving Fonzie spawned countless wannabes among the youth of America and became a cultural icon that still resonates today. And Fonzie's motorcycle, a customized Triumph, was owned off-screen by another cultural icon, Bud Ekins.

The late Bud Ekins was famous as a motocross racer, Hollywood stuntman (he did that legendary motorcycle jump over the barbed wire fence in The Great Escape), and as Steve McQueen's best friend. With his warehouse of hundreds of motorbikes, Ekins was the go-to man in Hollywood when producers needed two wheels. So when the people from Happy Days called, it was Ekins who determined what the coolest guy on TV should be riding. Taking an old Triumph in his collection, he simply removed the front fender, replaced the handle bars and spray painted the tank silver and, violá, the Fonzie bike was born. Of course, no one had any idea of just how popular the show would become or the magnitude of fame Winkler's character would achieve.

This Triumph, billed as "sole-surviving Triumph ridden by The Fonz in the hit TV series Happy Days" is as much a pop culture icon as it is a motorcycle. As such, it's sure to fetch a high price at the Bonhams auction this November, held at the Petersen Automotive Museum in Los Angeles. Additional 'star power' amongst the other lots already consigned for this auction include a Toyota Supra from the original 'The Fast & The Furious', a Lexus concept car from the 2002 Tom Cruise film, 'Minority Report', plus a 1987 Mercedes-Benz 560SL convertible given to Madonna by Sean Penn.

For updated information on the Classic California Sale as more lots are added, go to http://www.bonhams.com/petersen