The Rocket 3 was already the biggest, boldest and baddest motorcycle from Triumph. Now it’s the blackest, too.

They say black is slimming, but looking at the latest special editions from Triumph, I’m not sure if that’s true! There’s no denying the Rocket 3 is a big unit - big enough for any rider. But it’s not black enough for some, so Triumph have added two ‘blackout’ limited editions. 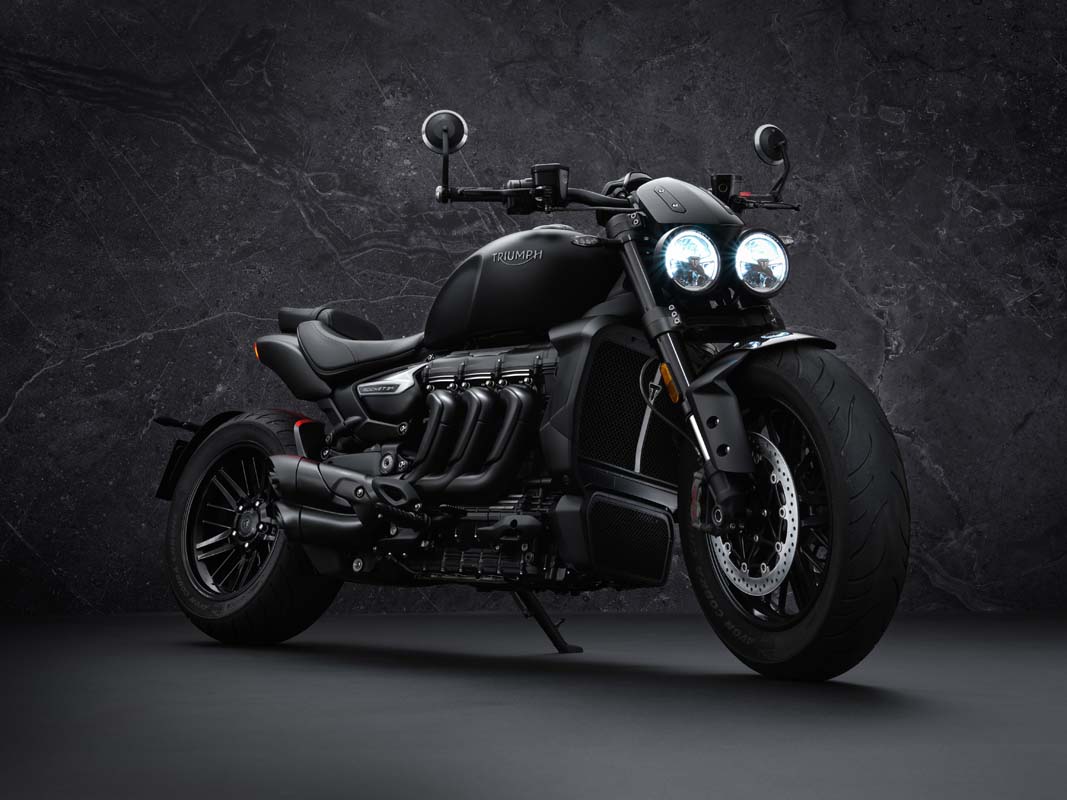 Since it was introduced in 2004, the Rocket 3 (originally Rocket III) has held the record as the largest-engined production motorcycle in the world. Even in its original 2,294cc (140ci) inline 3-cylinder form, the Rocket III was a monster. The increase to a 2.5-litre (2458cc, 150ci) engine in 2019 only confirmed its dominance. Producing 123kW at 6000rpm and 221Nm at 4000rpm, along with 0-100km/h acceleration under 3.0 seconds, the Rocket 3 continues to reign supreme in the power cruiser market. 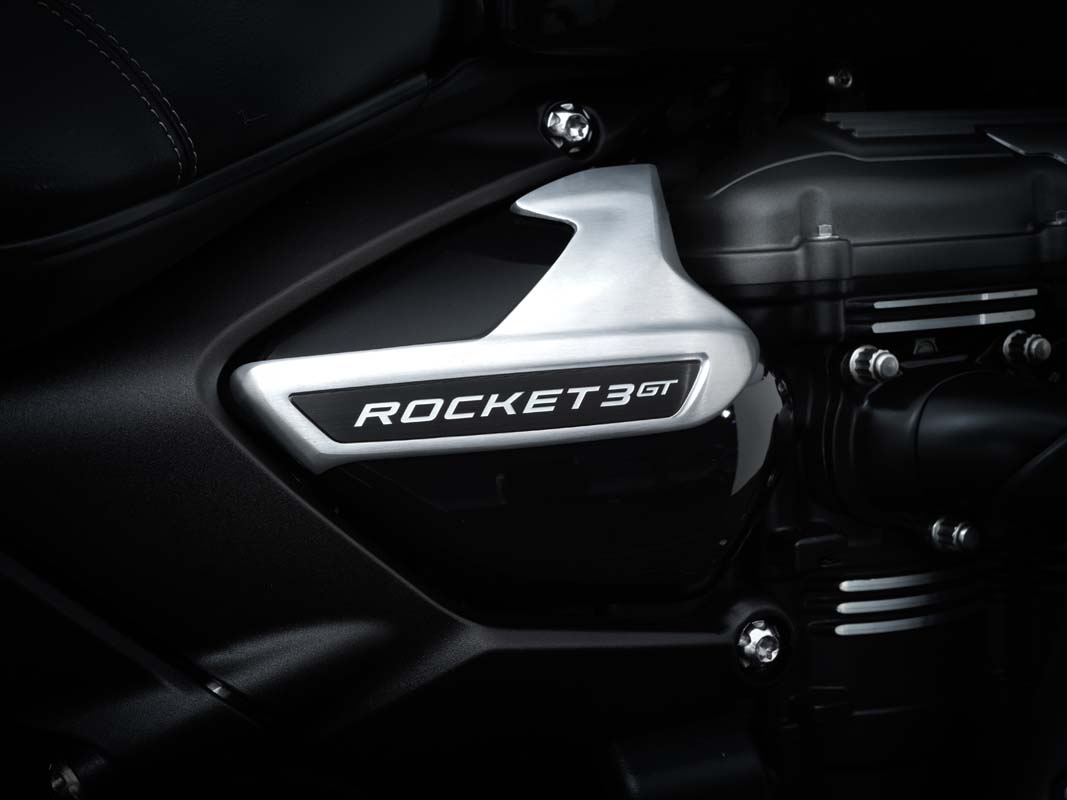 Earlier this year, Triumph announced two special editions to add a touch of style to all that muscle – the Rocket 3 R Black and Rocket 3 GT Triple Black. Each special edition is defined by blackout cosmetic alterations throughout, along with special paint finishes.

Described by Triumph as “stunning and sophisticated,” the Rocket 3 R Black takes the blackout treatment to the extreme, with a mix of gloss and matte black painted and black anodised finishes on just about everything.

Only the fasteners, ‘Rocket 3 R’ badging on the sidecovers and a handful of other details get the brightwork treatment. And the brake discs, of course, but I reckon if there was a way to make them black and keep them functional, Triumph would have done it!

Compared to the standard Rocket 3 R, the most obvious difference is in the full blackout engine treatment. The big 2.5 triple features a crinkle black powdercoat finish on the intake cover, with the exhaust getting black painted headers, heat shields and end caps.

Moving on from the engine, the front mudguard mount gets the black treatment, but the mudguard itself is bare carbon fibre. Headlight bezels are painted black, as are the fly screen finishers, radiator guards and seat finisher. Even the tank badging is black. 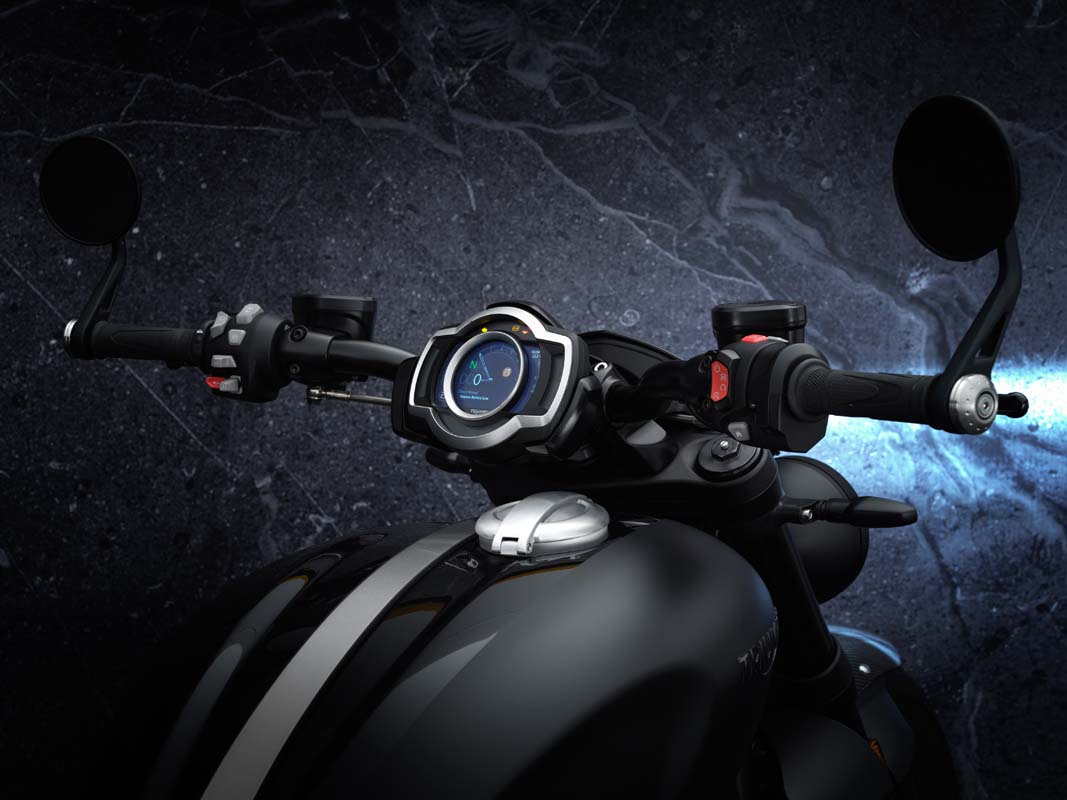 Seen in profile, the Rocket 3 R Black appears to be a feast of matte black, but atop the 18-litre fuel tank is a gloss black stripe that caries subtle ‘BLACK’ identification and continues on to the stubby tail section. 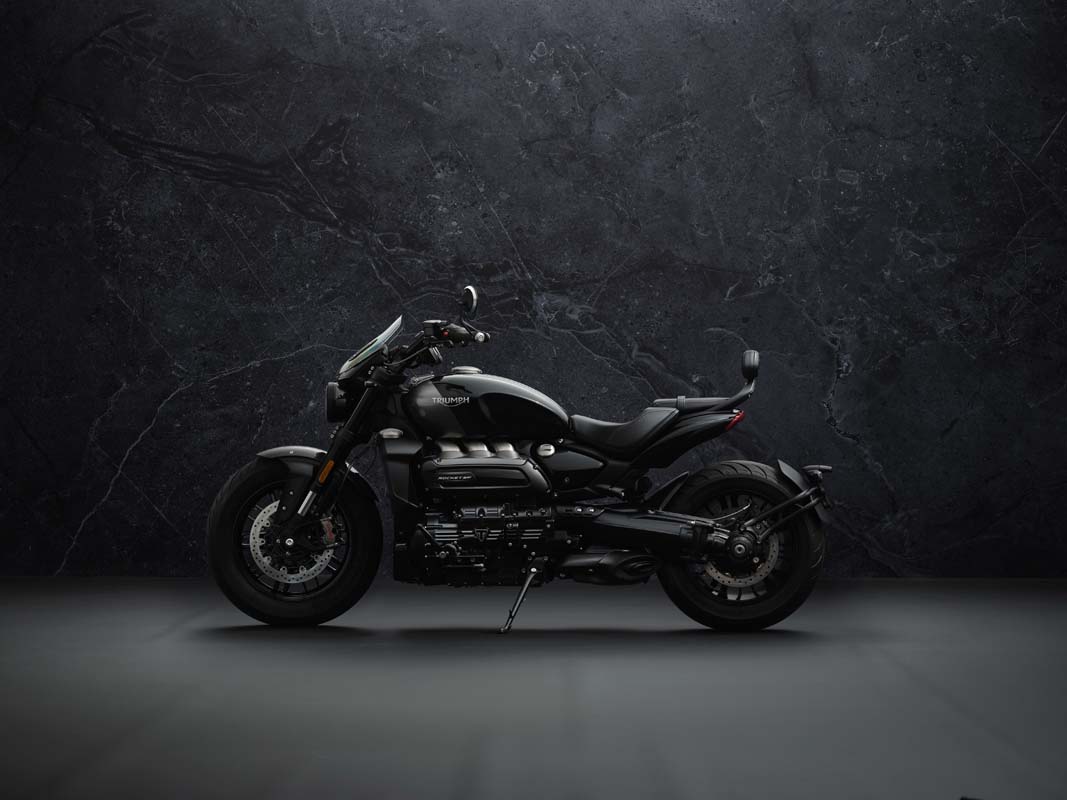 The GT Triple Black gets the same carbon fibre front mudguard and most of the same painted and anodised parts as the Rocket 3 R Black, including all the painted engine parts, blackout pegs, pedals and levers.

But, as the “triple” in the name suggests, there is a difference. A tri-tone finish on the fuel tank combines dark gunmetal metallic and gloss black sections, separated by a thick stripe in darker metallic grey.

Instead of a black tank badge, there’s a bright metal one on the GT Triple Black, but other trim parts, like the bar-end mirrors and radiator guards, are in the same finish as on the Rocket 3 R Black.

The wheels carry over from the regular GT, but the rear wheel finisher is blacked out, as is the bevel box finisher for the shaft drive.

Both of these blackout models are unchanged mechanically from the respective models they’re based on, so the engine capacity and outputs are unchanged, the six-speed transmission is carryover, as is the ‘torque assist’ clutch, while the Triumph Shift Assist quickshifter remains an extra-cost option.

Suspension consists of Showa 47mm USD forks with compression and rebound adjustment, while the rear Showa shock with remote reservoir is fully adjustable and features a remote hydraulic preload adjuster.

With all that engine grunt, the brakes need to be strong to match, so Brembo Stylema 4-piston radial monobloc calipers are fitted to the dual floating 320mm front discs, with a standard Brembo 4-piston monobloc caliper on the 280mm rear disc. Both these set-ups are unchanged from the regular Rocket 3 R and Rocket 3 GT.

There’s LED lighting all round, keyless ignition, keyless steering lock and a USB charge socket under the seat.

On the practical side, seat height is 773mm on the R Black and 750mm on the GT Triple Black – both unchanged from the regular models. Each seat is sculpted for comfort, with the GT adding that model’s adjustable pillion backrest. Pegs can be adjusted on the Rocket 3 R Black and handlebar reach is comfortable, while the GT offers slightly higher bars with more pull-back and heated grips as standard.

Only 1,000 units each of the Rocket 3 R Black and Rocket 3 GT Triple Black will be produced. Of that total, it's not known how many will be allocated for Australia, but it could be around 10 each.

Keep an eye on triumphmotorcycles.com.au for updates on Rocket 3 R Black and Rocket 3 GT Triple Black pricing and local release.