For his first custom build based on a Royal Enfield, XTR Pepo took the Continental GT650 to a new level.

Crash your bike, get it fixed with new factory parts. That’s the path most would take, right? But sometimes, the problem of a crash can be seen as an opportunity to remake a bike in a whole new image. That was the path taken with this Royal Enfield Continental GT650, which was given a new look – and a new life – thanks to the talented Jose “Pepo” Rosell. 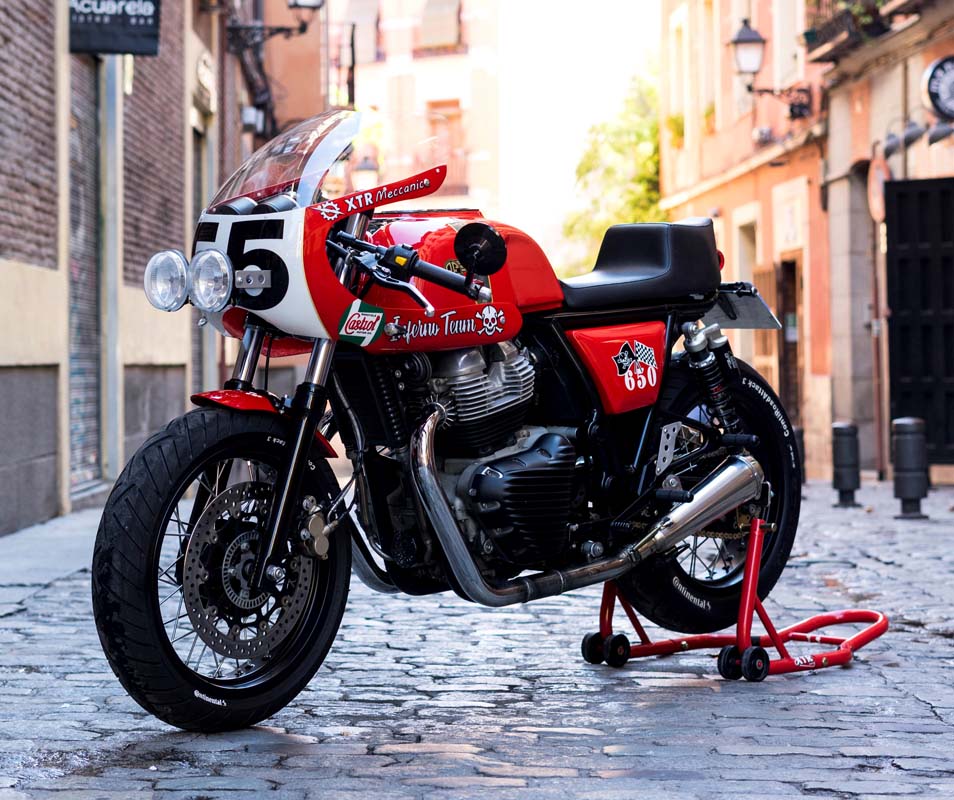 A well-known name in the custom motorcycle scene, Rosell has been in the business of building bikes for more than two decades, working solely with Ducatis initially, but since he founded ‘XTR Pepo’ (Extreme Pepo) in 2015, Rosell has broadened beyond the Bologna brand.

Base units for XTR Pepo builds have included all the Japanese marques, as well as BMW, Harley-Davidson, Triumph, Bultaco and even rare brands like Moto Morini and Mobylette. At time of writing, Rosell has produced almost 50 custom motorcycles under the XTR Pepo banner, so it’s a little surprising that none have been based on a Royal Enfield – until now. 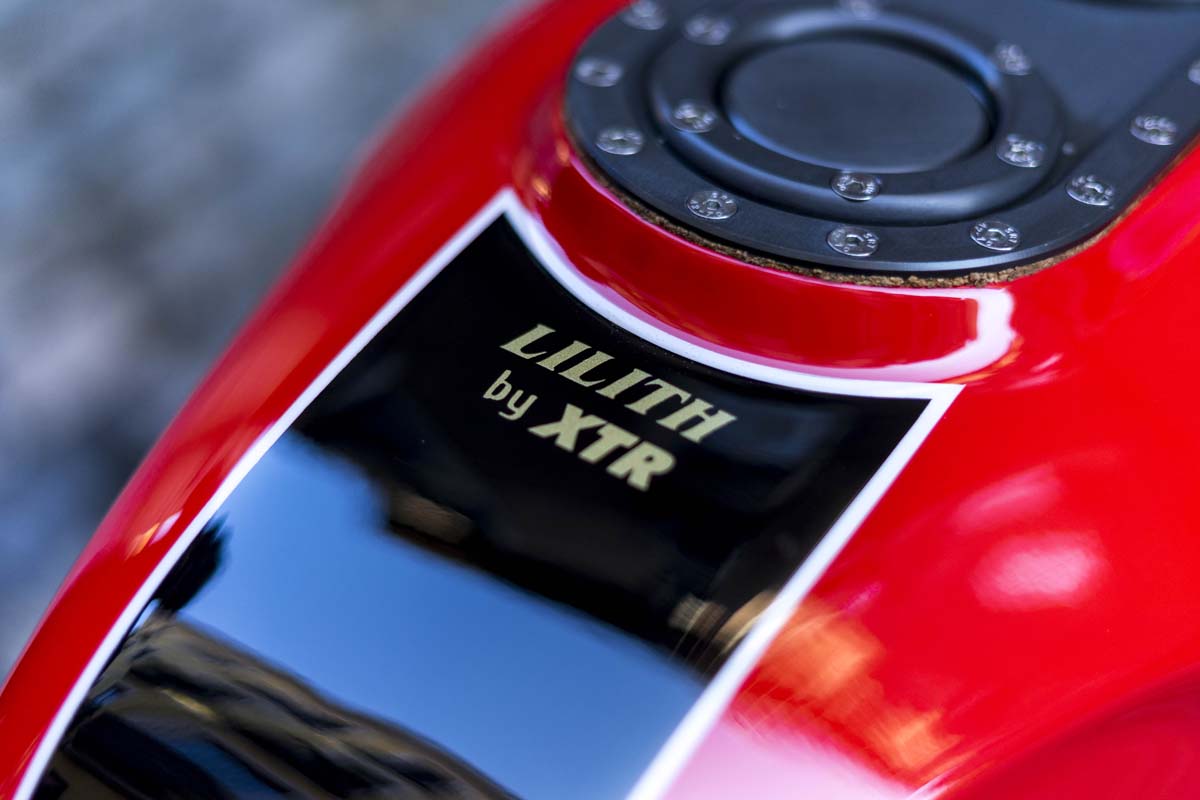 Royal First
The bike featured here started as a stock 2019-model Royal Enfield Continental GT650 that the owner, a tattoo artist friend of Rosell’s, located in Madrid, had something of a love-hate relationship with.

The ‘love’ part presumably refers to the Royal Enfield’s smooth performance and two-up riding comfort (the tattooist and his girlfriend regularly ride together). The ‘hate’ came when the bike spat him over the bars and left both he and bike damaged. 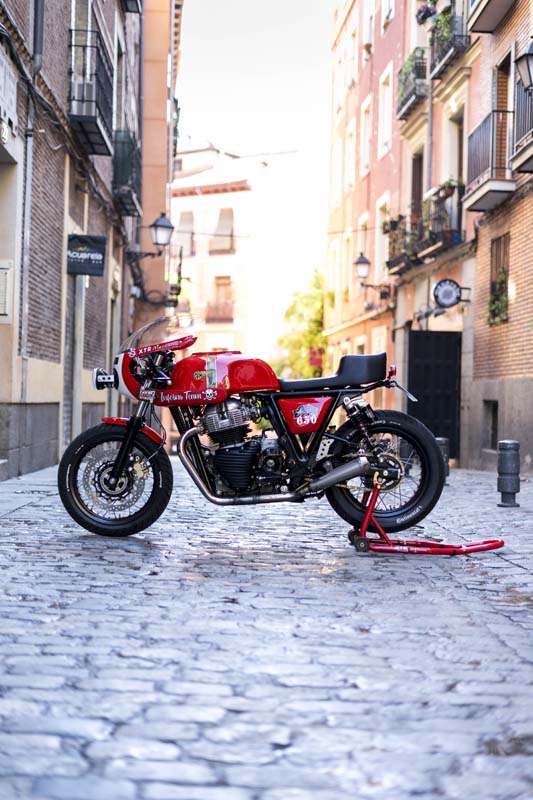 It’s for the latter reason that the Continental GT650 had been given the name of ‘Lilith,’ which sounds innocent enough, but do a quick internet search of that name and you’ll find it stretches back centuries, to Assyrian times, and translates as “night monster,” but can also be interpreted as “night creature” and “night hag”. Jeez!

That less-than-complimentary name aside, the owner still loved his bike and wanted to get it rebuilt, but instead of going down the factory path, he turned to XTR Pepo instead.

Inspired by some previous XTR Pepo builds that had strong endurance racing themes in their styling, the owner took his damaged Continental GT650 to Rosell in early 2021 with a brief to produce something that looked like it could have raced the Bol d’Or or Suzuka 8 Hours back in the day.

While the owner had some ideas for the styling and finish, Rosell had a pretty free rein with the build.

“The only thing I had to respect was that the bike should be a two-seater,” Rosell explained.

As a general rule, XTR Pepo doesn’t mess about with the bike’s running gear, so while things like intake and exhaust systems may be replaced or modified, the engine’s internals are rarely touched. Same goes for the transmission, with the factory gearing left unchanged in most instances.

For Lilith, the factory airbox was opened up and a DNA filter added, while the twin pipes were shortened and fitted with megaphone silencers from Turbokit. Presumably, the owner had some hard riding planned, as an RR oil temp gauge was added, too.

These changes, particularly the shorter pipes, would probably deliver a little more than Royal Enfield’s listed 34.9kW from the factory 648cc twin, but how much more is unknown.

The gravel rash that Lilith encountered in its bingle provided the opportunity to add some billet engine covers from K-Speed, which with their ribbed finish and black paint, have an old-school look and also pick up on the Continental GT650’s black barrels.

While engine internals are usually untouched on XTR Pepo projects, it’s a different story when it comes to the suspension, brakes, wheels and tyres.

On this build, the factory front suspension has only had the gaiters removed, but the rear shocks have been replaced entirely with remote-reservoir YSS units that are fully-adjustable to allow for the two-up riding that was a non-negotiable requirement.

For the brakes, the rear disc and caliper were left untouched, but the factory 320mm front disc and two-piston caliper set-up was enhanced with new braided stainless lines and a Brembo master cylinder.

Lilith’s wheels look like the stock Continental GT650 18-inch rims, but they’re actually Behr aftermarket units that are smaller at 17 inches and lighter, too. In an appropriate touch, given the base bike, these were wrapped in a pair of ContiRoadAttack 3 tyres from Continental.

When it came to giving the Continental GT650 the required endurance racer look, XTR Pepo’s history in this space means they’ve developed a lot of their own parts to suit. Many of these were applied to Lilith.

The front fairing is a fibreglass unit designed and made by XTR Pepo. The same goes for its mounting brackets, screen and bracket for the dual headlights that sit proud of the fairing. Those lights are XTR Pepo items, as are the LED indicators and retro-look tail light.

A pair of XTR clip-ons with matching end weights replace the Continental’s ‘high mount’ factory clip-ons. The clutch cable, clutch and brake levers are from the XTR Pepo catalogue, too.

The Royal Enfield instrumentation remains and the factory switchgear has been incorporated into the new control package, along with a Domino quick-action throttle, Suzuki GSX-R clutch perch, Highside bar-end mirrors and a Riga CNC-machined top triple clamp.

Also at the front end, the front mudguard has been shortened and incorporated into a fork brace.

Moving to Lilith’s fuel tank, it may look like the factory item, but it’s completely bespoke and a work of art in itself. Constructed from fibreglass, incorporating knee indents and Ducati 750SS-style fuel level windows on each side, there’s also a dry break-style filler from ACC Endurance moulded into the top to continue the endurance racing theme. While it looks ready for fast fills at the Bol d’Or, it’s just for show, with only the forward outlet functional and containing a conventional screw-top cap.

At the back end of Lilith, the subframe was docked just aft of the rear shock mounts and replaced with a much shorter item, to which a simple tail light mount and licence plate bracket were fitted.

A LiPo battery from French manufacturer Fulbat, along with the fibreglass tank, lightweight wheels and stripping several of the standard factory parts has dropped the bike’s weight significantly.

All up, Rosell estimates Lilith to be more than 20kg lighter than the listed 212kg weight of a Continental GT650 in standard form.

Aside from those special units used for VIP rides that you see at Phillip Island, race bikes aren’t made to carry two, which made the owner’s insistence that Lilith have a second seat something of a problem.

“To make a two-seat design be coherent with a race bike was a challenge!” Rosell recalled.

After poring over this problem for some time, Rosell found inspiration in one his own bikes from the past - a Moto Morini 350 Sport. Dating back to the late 1970s, the 350 Sport offered a rear seat hump that looked like your classic racing ducktail, but was flat at the top and upholstered to carry a pillion in relative comfort.

With that approach in mind, Rosell designed and built a new seat base, then carved foam to suit, even going so far as “measuring” the rear end of the owner’s girlfriend (!) to ensure the seat would be a perfect fit before wrapping it in black leather.

The fuel tank may be Lilith’s pièce de résistance, with the seat running a close second, but Rosell is most proud of the fairing.

“I’m very satisfied with the look of the cowl,” Rosell explained. “It gives the look of a British bike, like a Gus Kuhn Commando from the ’70s.” 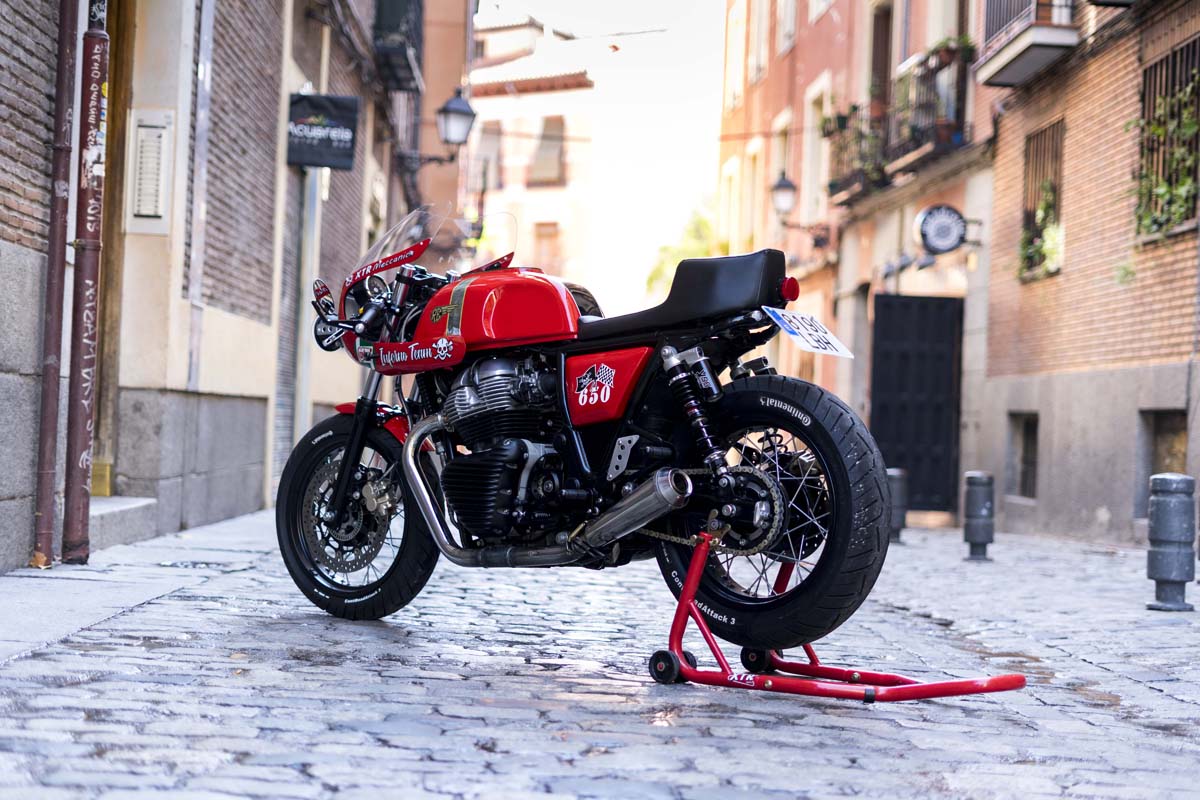 Completing this build is the red paint, which was laid down by longtime XTR Pepo collaborator Artenruta and enhanced with race-style numbers and graphics.

The owner apparently wanted a black finish, but Rosell refused – “I’m tired of black, dark and matt bikes!” - and persuaded him to go with a bold red instead, which is a better choice and makes the graphics pop.

Where this bike’s tattooist owner did get his way was with the Jolly Roger skull and crossbones graphics on the fairing and sidecovers that are his favoured symbol and adorn his body, too, apparently.

For a “night monster,” Lilith looks pretty bright in her finished state. The fact that XTR Pepo managed to incorporate the requirement for a pillion and combine endurance racer looks with street legality is even more impressive.

Three months in the making, it’s safe to say Lilith represents another win for XTR Pepo!

To see more creations from this prolific custom builder, go to: pepoxtr.com