Royal Enfield turns 120 in 2021. And while COVID may have put a halt to big plans and broad celebrations, it’s still a milestone worth celebrating. 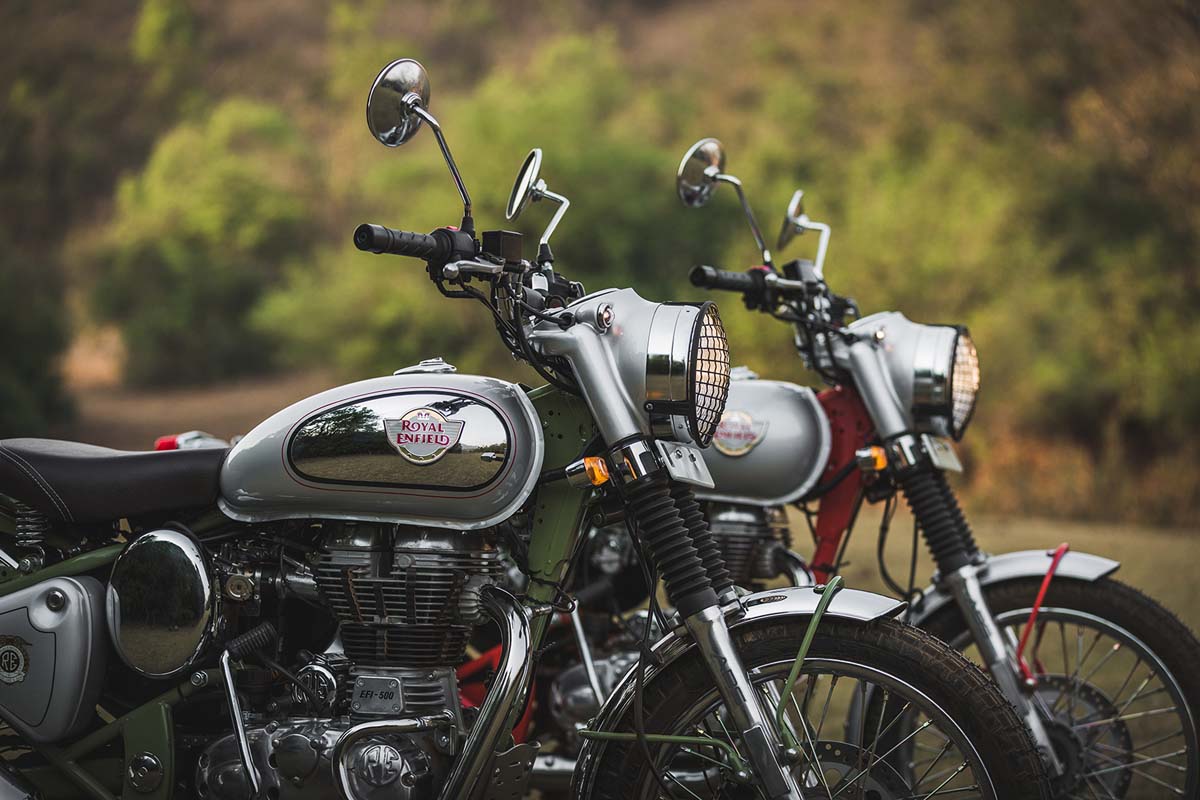 Not many brands – of any type – have survived 120 years, and this is particularly true in the area of motorised transport, where many large and proud brands have fallen by the wayside over the years.

So how has Royal Enfield managed to do it? According to Siddhartha Lal, Managing Director of Royal Enfield’s parent company, Eicher Motors Ltd., it’s about being true to your roots and your products being more than just a product.

“Royal Enfield is not just a motorcycle brand, it is a symbol of resilience and exploration and has been able to build a thriving culture of leisure riding around the world. Through these years we have endeavoured to stay authentic to our roots, continued to remain unique and distinctive, established a genre of leisure motorcycling that is accessible, inclusive, and absolutely enjoyable, and stayed relevant through the decades,” Lal explained.

“120 years is a long legacy for the brand, and we are very happy to have made it count.” 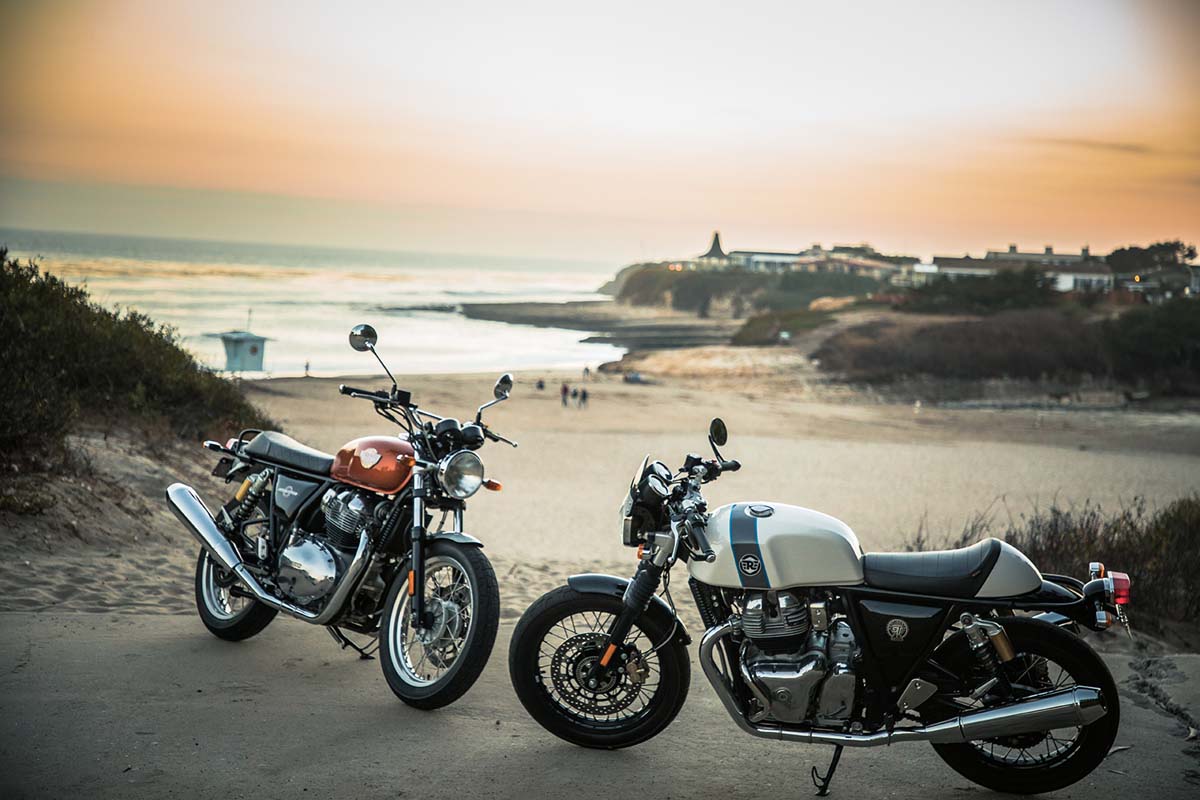 The first thing to know about Royal Enfield is that it wasn’t always called Royal Enfield and the business didn’t start out manufacturing motorcycles, either.

Had things evolved differently, Royal Enfield could have been called ‘Smith,’ ‘Eadie,’ ‘Townsend’ or even ‘Ecossais,’ as all four names figured in the company’s early history in England.

The roots of Royal Enfield can be traced back to 1851, when George Townsend established a needle making mill, ‘Givry Works,’ in the West Midlands town of Redditch, which has a history in needle making dating back to the 1600s.

Exactly why the needle making industry came to be centered on this small town south of Birmingham is unknown, but Redditch became globally renowned for the needles produced there, made by hand initially, then mechanised with the arrival of the Industrial Revolution.

When George Townsend opened his mill in 1851, that mechanisation had already been established, with Redditch going on to account for around 90 per cent of needle production worldwide.

Even before George Townsend’s death in 1882, his son, George Jr., had diversified the business – George Townsend & Co. - to tap into the booming bicycle market, first developing a bicycle seat frame, then a complete bicycle.

Bicycles marketed under the ‘Townsend’ and ‘Ecossais’ name were catalogued in 1886, but in 1891, Townsend hit financial difficulties, so bankers appointed Albert Eadie and Robert Walker ‘Bob’ Smith to revive the company. Eadie came to the business as sales manager for a Birmingham pen maker, while Smith was an engineer with Rudge Whitworth Cycles (yes, THAT Rudge).

Eadie and Smith bought George Townsend & Co. in 1892 and renamed it The Eadie Manufacturing Company Ltd. A year later, they secured a contract to supply precision-machined rifle parts for the Royal Small Arms Factory in Enfield. To acknowledge the prestige that came with such a contract, the company name was changed again to ‘The Enfield Manufacturing Co. Ltd’ and their bicycles were renamed ‘Enfield,’ then ‘Royal Enfield’ in 1894, when the ‘Made Like a Gun’ slogan also appeared for the first time.

In 1898, the first powered vehicle to bear the Royal Enfield name appeared; a quadricycle based on a pair of bicycle frames and powered by a French-made DeDion engine.

The French connection continued with Royal Enfield’s first true motorcycle, which Smith developed in collaboration with Frenchman Jules Gobiet. Launched in 1901 at the ‘Stanley Cycle Show’ in London, the debut Royal Enfield two-wheeler was powered by a single-cylinder 1 1/2hp engine, mounted above the front wheel, but driving the rear wheel via a long crossover belt.

Like many early motorcycle manufacturers, Royal Enfield used bought-in engines initially, fitted to their own cycle parts, but from the earliest days, they developed their own engines, too.

In 1902, Royal Enfield also started building automobiles, with a separate company established for this, but it proved far less profitable, forcing Eadie to sell his stake in Royal Enfield to BSA in 1907.

Bob Smith remained and his son, Frank, would join Royal Enfield in 1909, rising to the position of joint Managing Director – with his father – in 1914.

To the company’s range of singles, the first v-twin model was added in 1909, powered by a 297cc Motosacoche engine and used successfully in trials competition in the UK. Larger capacity twins would follow, as well as the company’s first two-stroke single.

Following the outbreak of World War I, Royal Enfield would be called upon by the War Department to supply motorcycles, mostly 770cc v-twin sidecar outfits, to the British Army. Configured as ambulances and mobile machine gun mounts, as well as general transport, these outfits would also be used by the French, Belgian and Imperial Russian armies during the war.

Army contracts helped keep Royal Enfield solvent during the war and also allowed for experiments, including motorcycles with three- and four-cylinder engines (both of inline configuration), matched to multi-speed gearboxes.

Civilian motorcycle production recommenced in 1919, with the pre-war v-twin and 225cc two-stroke single the only models offered until 1924, although a 976cc capacity v-twin engine, designed by Enfield, but built by Wolseley, replaced the 770cc JAP engine in 1921.

The first expansion of the Royal Enfield range post-WWI came in 1924 in the form of a 346cc single in side-valve and overhead-valve form, with a 225cc step-through ‘Ladies Model’ also offered, followed by a 488cc four-speed single in 1926.

While Royal Enfields had first raced at the Isle of Man TT back in 1911, a factory assault on the TT didn’t come until 1927, where George Reynard finished fourth in the Junior TT and Cecil Barrow claimed seventh in the Lightweight and Junior. Eight years later, Barrow would run a 500cc model in the Senior TT for Royal Enfield’s last factory entry.

Modernisation of the Royal Enfield range came in 1928 with the adoption of saddle tanks and girder fork front suspension. Further modernisation came in 1930 with dry-sump lubrication introduced on 346 and 488cc singles, while a lighter 346cc side-valve single was added to the catalogue in the same year.

In 1931, all Royal Enfield singles would feature inclined engines, but of more importance that year was the arrival of a significant model in Royal Enfield history.

The first Royal Enfield ‘Bullet’ debuted in late-1931 for the 1932 model year. The name invoked the military past of The Enfield Cycle Co. and defined a sportier variant of the existing single-cylinder range.

Offered in 250, 350 and 500cc form, the Bullet featured a high-compression piston, a twin-port head and foot-operated gear change.

Also arriving in 1932 was the ‘Cycar’, which in appearance, looked like a Velocette LE with its enclosed bodywork and legshields. Featuring a pressed steel frame and 148cc two-stroke single, the Cycar was marketed as an everyday commuter.

With the passing of Bob Smith in 1933, son Frank assumed full control of The Enfield Cycle Co., but there were no notable changes in the Royal Enfield model lineup until 1936, when the Bullet was given a makeover, with an upright engine and 4-valve head introduced. The same changes were applied to the conventional singles, too.

The broad range of sports and standard singles was still bookended by the two-stroke single and big v-twin, now at up to 1,140cc capacity for export markets.

On the eve of World War II, a new ‘RE’ model was introduced, copied from a German DKW design, but featuring a larger 125cc single-cylinder engine. Ironically, this model would be used against the Germans in WWII, being deployed in a most unique way. 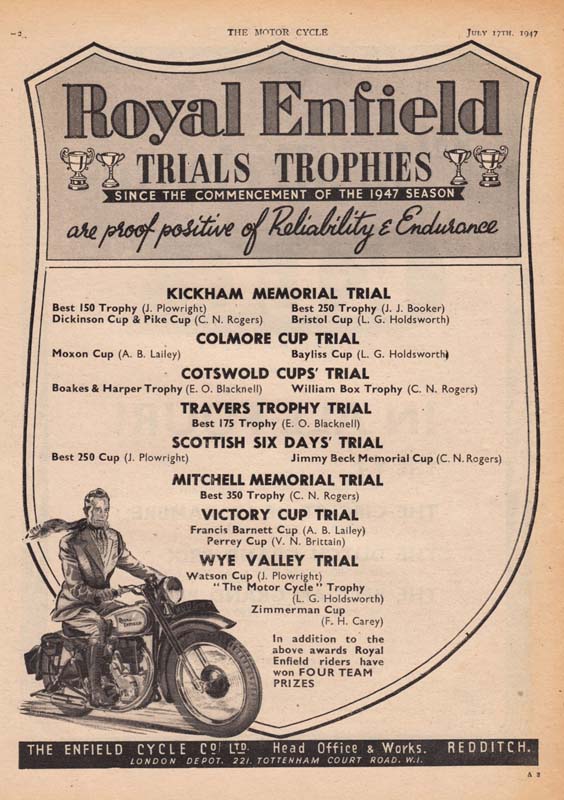 As was the case 25 years earlier, the declaration of war in 1939 saw Royal Enfield swing into war production mode for the duration.

The existing singles were modified and produced in a range of variants for British Army use, including side-valve and overhead-valve 350s, a side-valve 250 and side-valve 570, all identified by ‘WD’ (for War Department) model codes. Unlike the previous war, sidecar outfits weren’t in high demand this time, even before the arrival of the US-designed and built Jeep, which performed a similar role.

Royal Enfield’s most interesting contribution to the war effort was the militarised version of the RE 125 – the WD/RE. Also known as the ‘Flying Flea,’ the WD/RE’s inherent light weight (it could be carried by one man) and robustness made it ideal for deployment with paratroops, but some modifications were needed, including a sealed fuel filler vent and quieter exhaust.

When the British Army’s Airborne Divisions jumped over enemy territory in France on D-Day and during ‘Operation Market Garden’ in Holland in 1944, the Flying Flea went with them, dropped by parachute and protected by a specially-designed tube steel outer cage, which was also built by Royal Enfield at a second factory in Scotland. The WD/RE would also go into battle via glider and conventional amphibious landings.

In addition to motorcycles, Royal Enfield also produced a diverse range of other materiel for the war effort, including generators, bicycles and parts for anti-aircraft guns.

After the war, there were enough army surplus motorcycles in circulation for Royal Enfield to buy many of them back, repair and repaint them for sale to the civilian market. True civilian versions of the RE 125, along with the 350 and 500 singles, followed in much the same spec as they were pre-war, except for telescopic forks on the four-strokes.

The Bullet wouldn’t reappear until 1948, but when it did, it came with a radical change…

120 Years of Royal Enfield continues with Part 2 next issue.