Kingston Custom take BMW’s retro-styled R 18 cruiser and dial the “retro” up to 11.

Even before the R 18 was officially released, BMW Motorrad had gifted units of the 1800cc boxer-engined cruiser to some of the world’s most talented and individual bike builders, like Custom Works Zon and Revival Cycles, to work their magic. COVID-19 interrupted the flow of one-off creations last year, but Roland Sands Design and Bernhard Naumann, aka Blechmann, still managed to turn out their own take on the big boxer twin.

Earlier this year, Kingston Custom unveiled what’s arguably the most beautiful – and unquestionably the most individual – creation on the R 18 platform – the ‘Spirit of Passion’.

Past Successes, Past Inspiration

The town of Gelsenkirchen probably draws a blank, even amongst German natives, but it’s large enough to have a ‘north’ and ‘east’ sub-township. Nestled between Essen and Dortmund in Germany’s west, Gelsenkirchen is also the base for Kingston Custom.

Kingston Custom’s founder and chief creator, Dirk Oehlerking, has been building custom bikes since 2010 and has a history in motorcycling going back even further, including being Germany’s national enduro champion in 1985.

Since he caught the custom bug, Oehlerking has built all manner of one-offs, on platforms as diverse as Yamaha, Honda and Triumph. But being a German native, it’ll come as no surprise that plenty of BMW customs have rolled out of the Kingston Custom workshop, too. 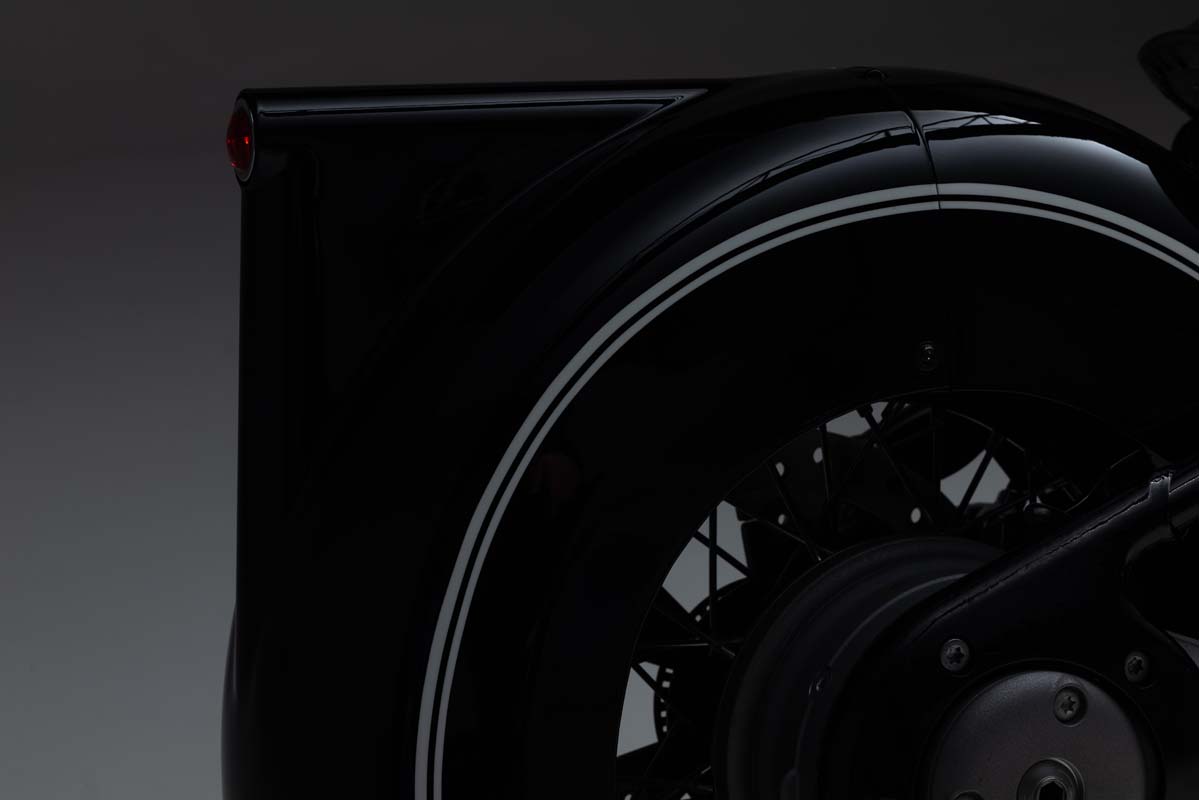 The trail that leads to the bike presented here started with the ‘White Phantom’ from 2016. That creation, based on a 1986 BMW R80 RT, was followed up with a similar, but not identical R80 RT-based sibling: the ‘Black Phantom’. What defined these two bikes was their wrapround aluminium bodywork that left the signature BMW horizontal twin cylinders exposed.

Where the white bike left the rear wheel exposed, the black follow-up fully wrapped the rear end, giving it the look of an old-school land speed record setter, accentuated by brass trim and detailing. Clever touches on the Black Phantom included a repositioned, custom-made fuel tank, fold-out tool kit on the nearside of the rear bodywork and LED surrounds for a pair of genuine R51 ‘tank’ badges.

Common to both was a narrow cross section and instruments that were arranged in Indian file ahead of the saddle and set into the custom tinware. Each bike also carried a subtle nod to BMW’s automotive history in the form of small ‘kidney grille’ openings in the hand-formed bodywork, inspired by BMW’s pre-war 328 roadster. Both bikes were rideable (but not comfortable!), with the White Phantom adding a functional supercharger for good measure. 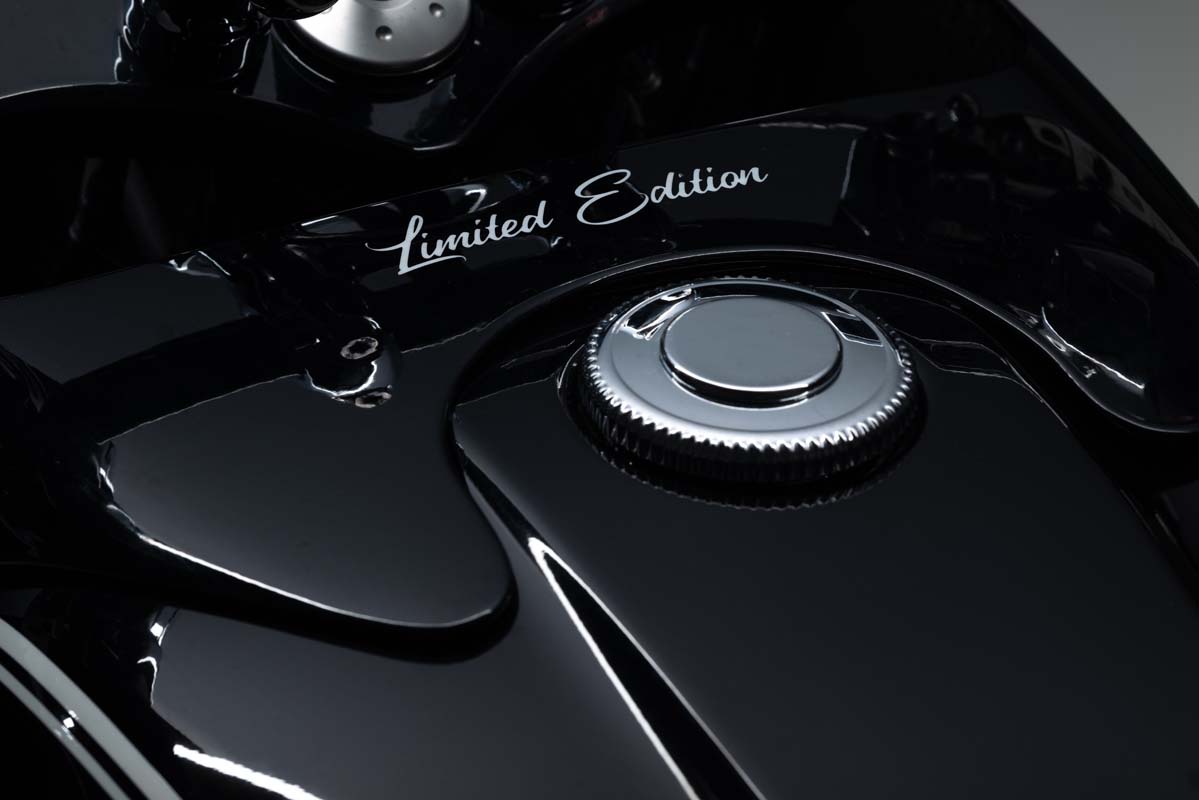 The White Phantom was runner-up in its class at the 2016 AMD World Championship of Custom Bike Building, while the Black Phantom made its debut at the Wheels and Waves Festival in Biarritz, France, two years later.

Oehlerking viewed the White and Black Phantom as a matching pair – one ‘yin’ to the other’s ‘yang’ – and was content to leave the themes explored on those bikes and move on with new ideas, but in 2019, famous motorcycle collector, museum owner and custom motorcycle patron Bobby Haas commissioned Oehlerking to create a third custom in the same Art Deco vein. 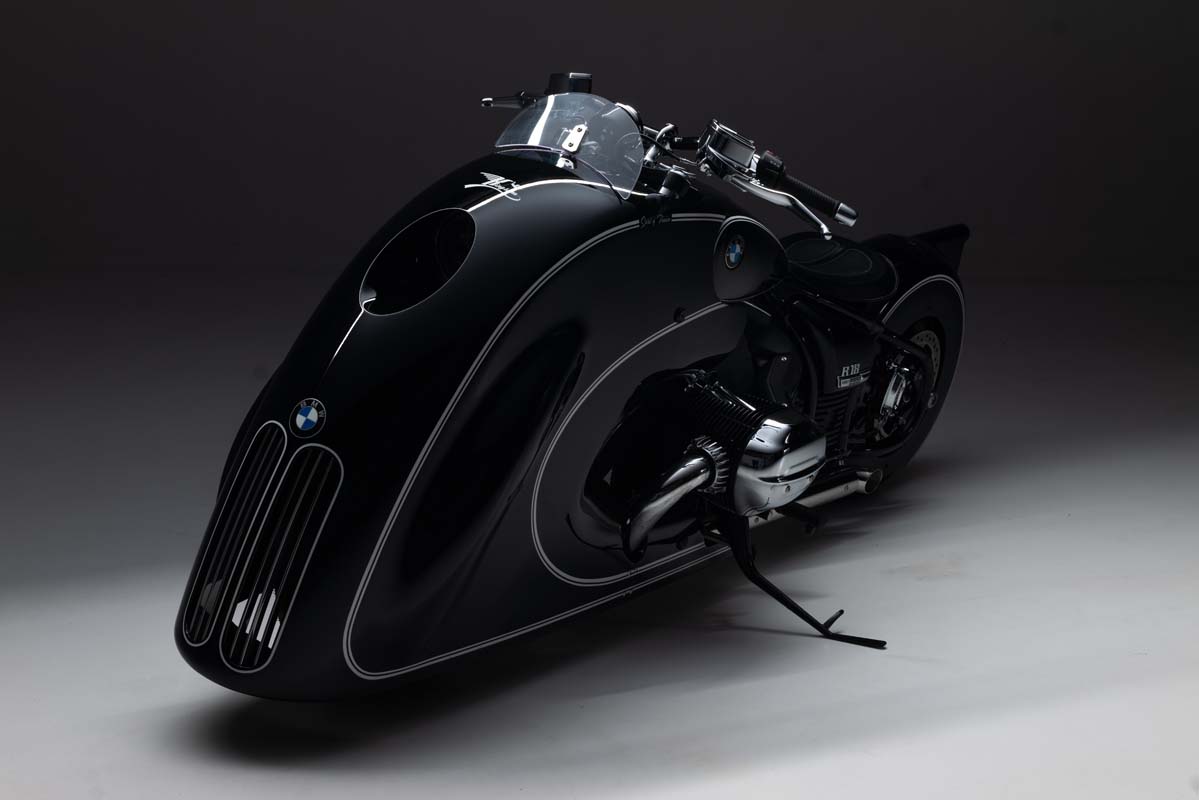 That creation, dubbed ‘Good Ghost,’ took what had been developed on the Phantoms and upped the ante to create an aluminium skin that enveloped the whole bike, leaving only the handlebars and those boxer twin cylinders exposed. This comprehensive body allowed the kidney grille tribute to be bigger and bolder, too, but impacted the bike’s turning circle.

Familiar Kingston Custom details from the previous two Phantoms, like vertically-stacked instruments, narrow clip-on ‘bars, custom fuel tank, fold-out toolbox and custom intake manifolds, were also applied to Good Ghost, while whimsical touches included a cutlery holder on an offside fold-out panel and a leather-lined compartment in place of the fuel tank that held a bottle of wine, glass and corkscrew!

The reason for these additions, Oehlerking explained, was that if this bike was a reality back in the 1930s, it would have been ridden by a ‘gentleman racer’ and equipped with luxuries, as well as practicalities. 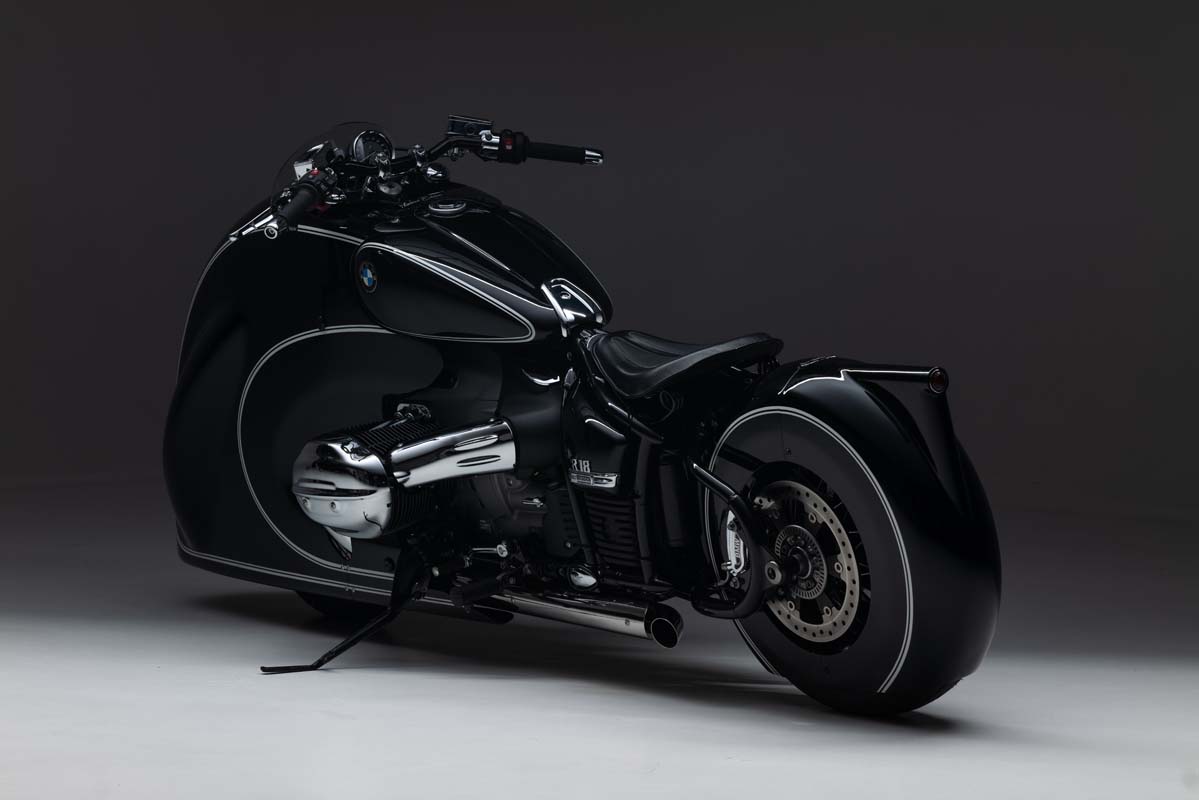 On invitation from BMW Motorrad, Oehlerking has now applied his impressive skillset to the R 18, joining the other aforementioned builders in reimagining the big boxer twin cruiser.

“The trust that BMW Motorrad has placed in me is hugely important. I’m very grateful for that,” Oehlerking explained.

Unveiled this past January, the Kingston Custom creation, titled ‘Spirit of Passion,’ continues the same Art Deco-inspired styling themes that shaped both Phantoms and the Good Ghost, but has points of difference and many unique features of its own.

While all three phantoms had extensively de-tabbed and modified frames, custom inlet and exhaust systems, custom fuel tanks, custom suspension and even modified drivelines, the Spirit of Passion is mostly untouched mechanically and in terms of its chassis.

“The BMW R 18 is so perfect that I left the technology as it is,” Oehlerking explained. “The frame is 100 per cent original and so sophisticated that nothing should be changed here.”

Oehlerking allowed himself some changes to the R 18, spec, though, starting with the exhaust system, which features docked factory pipes that run close to the lower frame and custom bodywork. 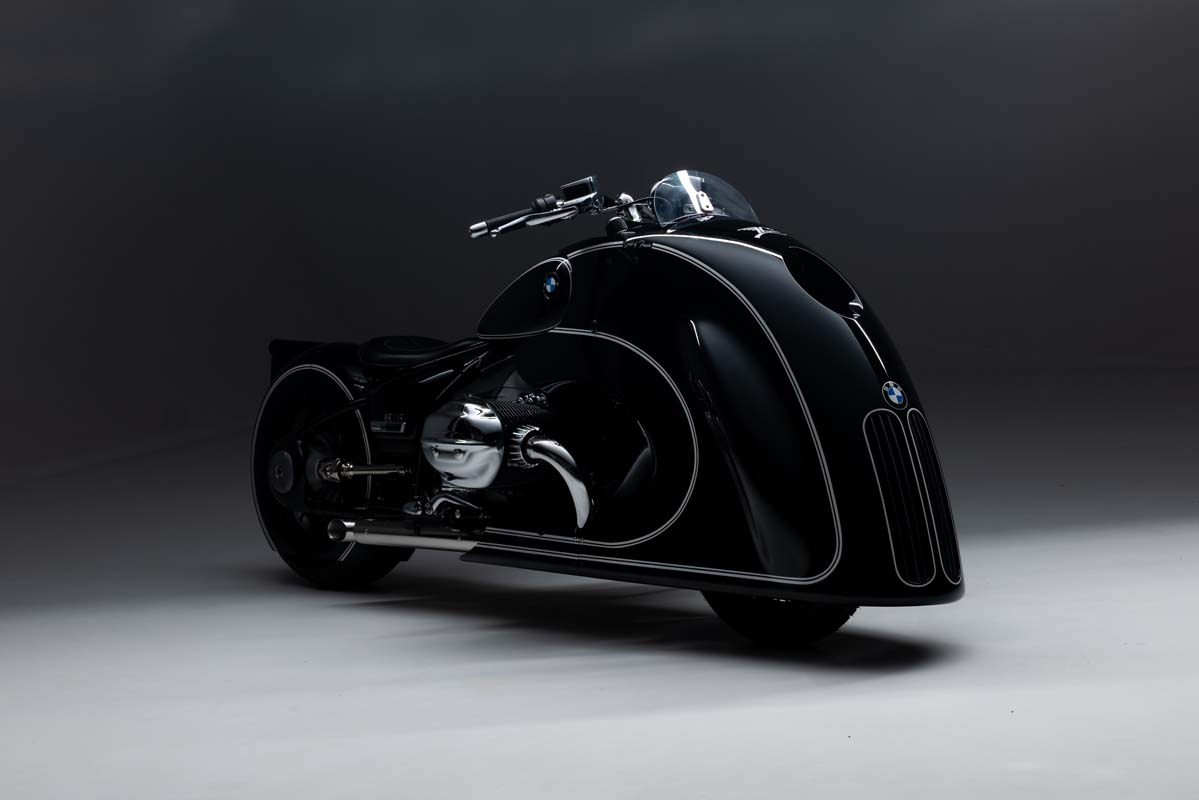 Looking to that bodywork, the Art Deco styling remains, but this time it’s been hand-made out of fibreglass, not sheet aluminium. That meant scratch building a mould to form the panels, ensuring the finished product not only met Kingston Custom standards, but blended seamlessly with the R 18’s fuel tank, engine and frame.

As with Good Ghost, a BMW 328-style kidney grille graces the front end of Spirit of Passion, while a recess for the headlight houses not the BMW factory item, but an aftermarket LED unit from Highsider. The handlebars are not clip-ons like the Phantoms and Ghost, but are still custom-made, with reduced spread and pull back compared to the factory ‘bars. Master cylinders, grips and levers are the BMW factory units, but there are a pair of compact Kellerman indicators fitted, keeping the bodywork clean and ensuring this creation remains street legal – in Germany, at least!

Being a “corporate” build, there’s more BMW identification, including a third roundel on the front end of the fairing, atop which sits a small Perspex windscreen that’s more decorative than functional.

Speaking of functional, the knock on Oehlerking’s Good Ghost is that the turning circle would be severely compromised by its all-enveloping fairing. Despite appearances to the contrary, the turning circle on Spirit of Passion is said to be virtually the same as the factory R 18. There’s enough ground clearance so that lean angle is comparable to the factory-spec bike, too.

As well as the bulbous fairing, Oehlerking also fabricated a fiberglass replacement for the rear mudguard that closely hugs the back wheel and includes a functional stop/tail light. There’s also a fin to keep the retro land speed record theme from Good Ghost going.

The fairing uses existing fastening points on the frame, while the rear wheel cover is mounted to the swingarm, so it can afford that oh-so-close fit.

Being based on the R 18 First Edition, Spirit of Passion continues the First Edition’s retro twin coachlines onto its custom bodywork, while the solo saddle is a factory accessory item. 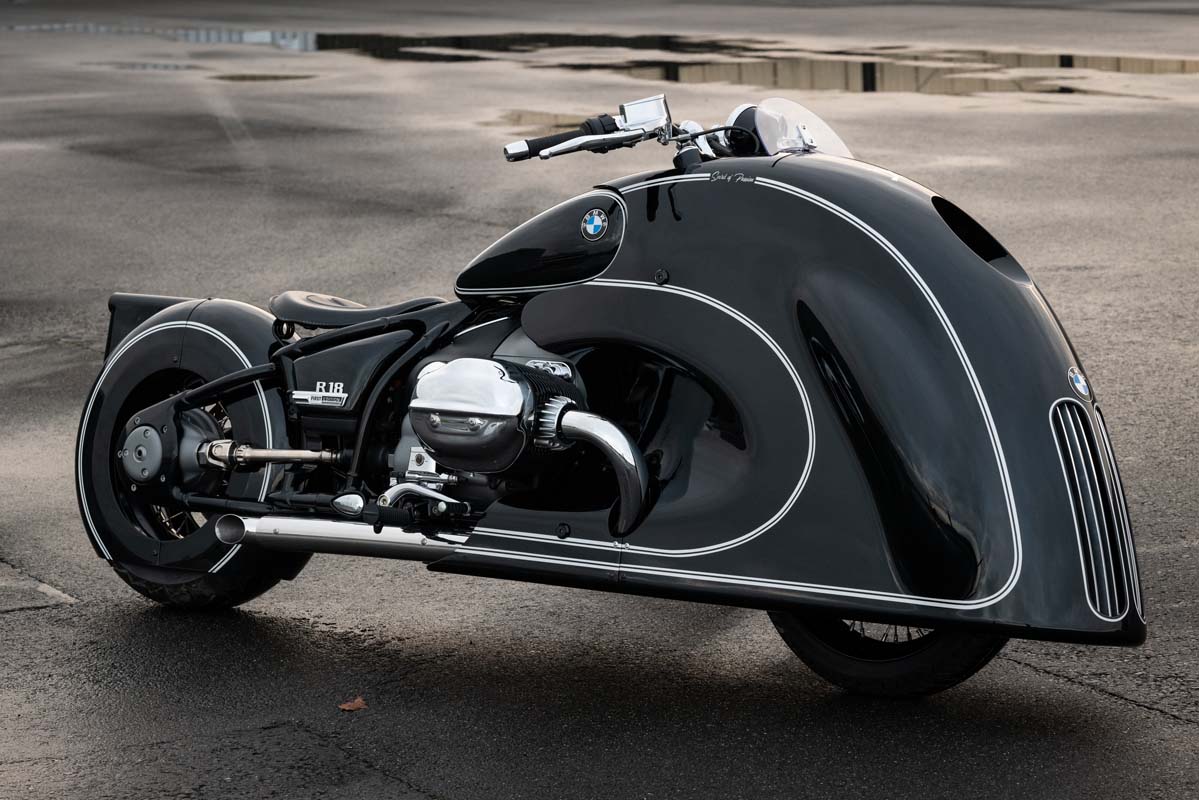 As impressive as Oehlerking’s work on Spirit of Passion is, what’s even more noteworthy is that all his design and fabrication is done without modern technologies. Even his sketches are low-tech.

“I have a constant stream of images running past my mind’s eye when it comes to deciding what style I want to focus on,” Oehlerking explained. “Once I’ve made that choice, I start with a sketch in pencil and Tipp-Ex. Then I keep going until I know in my heart of hearts that’s precisely it!”

Oehlerking goes on to describe each Kingston Custom as an outstanding specimen that requires great care and attention, not only in the design, but also the fabrication.

“I put a lot of thought into it. My motorbikes always convey soul, charm and character.”

Since it was released, Spirit of Passion has been getting a lot of praise, and according to custom bike website Bike Exif, Oehlerking is considering producing a small run of copies. As the frame and engine are unaltered, such a creation would be feasible while still being road legal. The cut-down exhaust would be an issue, though. Given the appetite for custom bikes by the likes of Haas and many other enthusiasts, a limited-edition run of Spirit of Passion R 18s would almost certainly find customers.

If it comes to fruition, there’s no doubt that these Spirit of Passion replicas would be the most individual creations on the road!