With sci-fi styling and classical inspiration, this BMW R 18 custom from 'Blechmann' is truly unique.

BMW Motorrad are no strangers to the factory-supported custom game. JUST BIKES has featured many factory-sponsored, BMW-based creations from some of the world’s best builders in the past, particularly units based on the R nineT.

Now, with their R 18 cruiser, BMW are looking to get that model in front of as many eyeballs as possible, so they’ve commissioned a fresh series of custom creations from third-party builders, as well as a couple that they produced themselves.

One of those outside builders to get a gig was Bernhard Naumann, better known as “Blechmann” (“Tin Man” in German, or “Tinny” more specifically) for his handiwork in forming complex shapes in metal.

Most of the R 18-based customs released so far have polarised opinion. Blechmann’s creation is no exception…

The first thing to know about Bernhard Naumann is that there isn’t a lot that’s known about him. What the man does reveal is a bit cryptic. For example, on his website, the born-and-raised Austrian describes what he does as “storytelling with your hands”.

With somewhat shonky translation from German, Naumann continues: “I don't go about things like the technician who has to follow a rigid plan, but freely, spontaneously, always keeping the proportions in mind and from every point of view.

“I literally draw the contour on the real object, even if there is a declared goal that I have to meet. So I feel my way to the sculpture, step by step. A constant act of searching with the aim of uncovering a part of the soul of a design. I think this approach guarantees a harmonious holistic design.”

Naumann’s history in metal fabrication goes back to the early 1990s, first as an apprentice panel beater (or “body surgeon” as he calls it), with the move into custom bikes coming in the new millennium. He’s won a couple of awards, so his work is respected.

As he mostly creates bespoke fuel tanks and tinware for other custom builders, Naumann doesn’t have a huge catalogue of bespoke motorcycles of his own, but what he has produced is pretty diverse, from a Suzuki GSXR-powered streetfighter and Yamaha-engined café racer to a Harley race bike and a radical Norton-engined chopper. 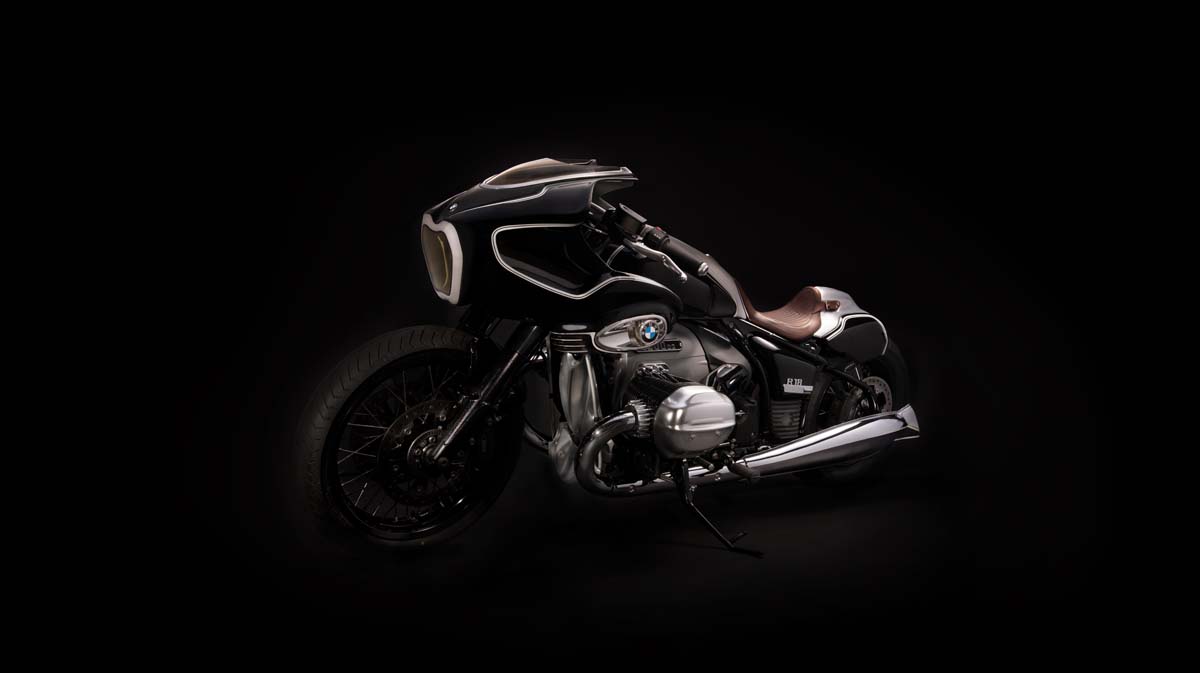 Tying all these creations together is the use of hand-formed metal elements with a sculptural look and feel that belies the material used.

That approach was taken to its most extreme level in another previous build commissioned by BMW – the ‘Giggerl’.

Completed in 2017, Giggerl looked like a Transformer stuck midway between a BMW R nineT and an Autobot.

While the R nineT engine on Giggerl was unchanged, the exhaust was custom-made. The frame was customised, too, and the wheels modified. All the other tinware was built from scratch, including the fuel tank, headlight surround, bellypan, seat, mudguards and side covers.

While past Blechmann creations have borne names like ‘Cosmic Rider,’ ‘Triumph of Hearts’ and ‘The ‘Carpathian Dog,’ the Giggerl took its name from a southern German word for ‘chicken’. Why? Naumann was told that the front end looked like a chicken’s head and the tank extensions looping over the handlebars were like a chicken’s wings, so ‘chicken’ it was!

Interestingly, Naumann says he never creates sketches in advance of starting a build, choosing instead to gather inspiration while working on the bike.

"My work begins by removing parts of the original version until a ‘white canvas’ remains. As the construction progresses, the design develops. I call this 'rapid-prototyping-Blechmann-style'. 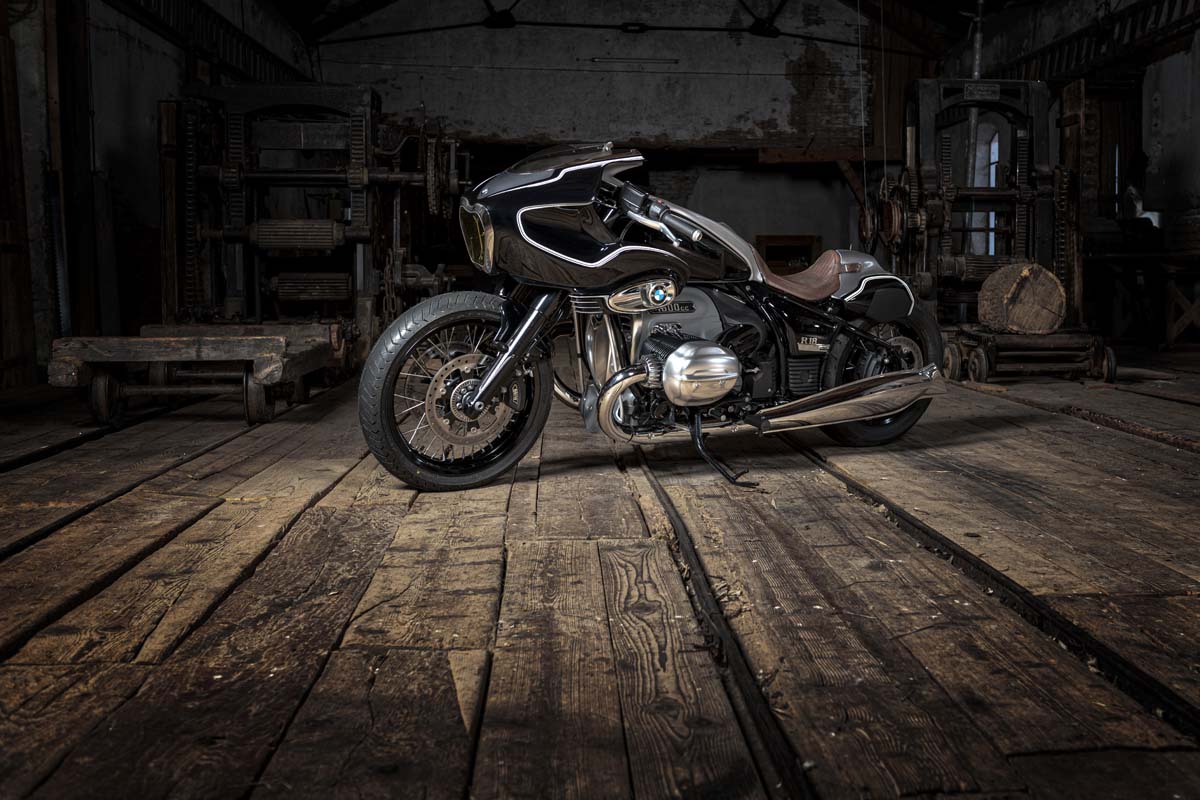 “I draw my design directly on the object using the final material. This allows me to directly respond to the requirements and to keep an eye on the proportions at all times.”

Adding to the air of intrigue around the man is the fact he mostly works alone and only farms out selected elements of his builds to a small coterie of hand-picked professionals.

While not a lot is known about the man called Tinny, what is known is that he’s a sci-fi fan, which explains a lot about the creation pictured - the ‘Blechmann R 18’.

Like previous and subsequent customs commissioned by BMW Motorrad on the R 18, there seems to be an unwritten rule to leave the more radical custom techniques, like frame chops and engine swaps, on the table. Naumann has respected this, so the Blechmann R 18 is untouched mechanically. The exhaust, frame, suspension, braking and selected other cycle parts are unchanged, too. Wire spoke rims are taken from the R 18 accessory catalogue, with pegs, pedals, grips and levers also being unchanged stock items. Clip-on handlebars have been added to give a sleeker look, though.

The Blechmann touch starts with the sinuous fairing that includes a custom metal cover over a modified factory fuel tank. Naumann said the fairing's shape was inspired by the support structure for the R 18’s factory rear mudguard.

Deep cutouts in the fairing allow for steering movement, while a pair of Kellerman headlights behind French-style yellow lenses are inspired by the signature ‘kidney grille’ on BMW automobiles.

Incorporating a smoked windscreen, the custom metal fairing also takes the BMW badges from the tank and adds them to custom bright metal surrounds. 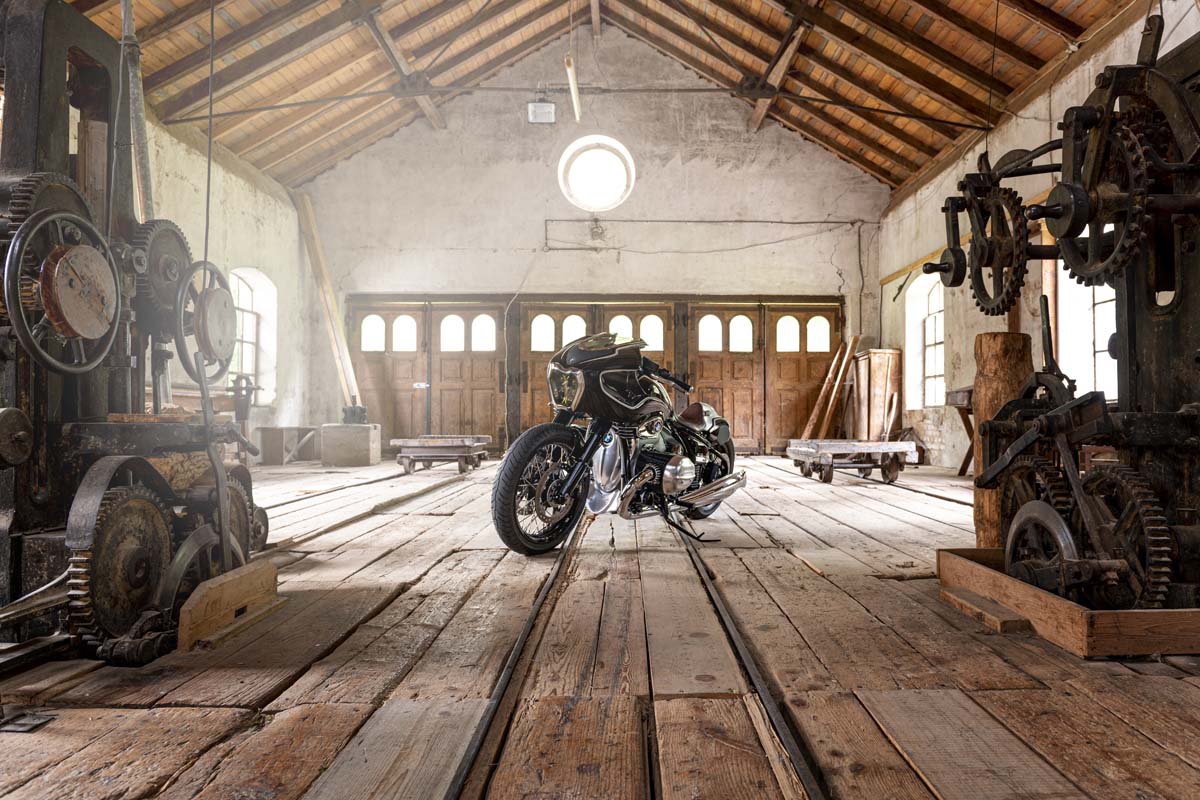 The size, shape and positioning of the finished fairing gives this R 18 a bagger look, so we’d love to see some panniers – Blechmann style, of course – to complete the theme.

The custom tank cover connected to the fairing flows seamlessly into a custom solo seat and custom bobbed mudguard. These elements have the same sinuous, sci-fi look as the fairing, while twin white coachlines and aged leather for the saddle tap into the retro styling details of the factory R 18 First Edition. 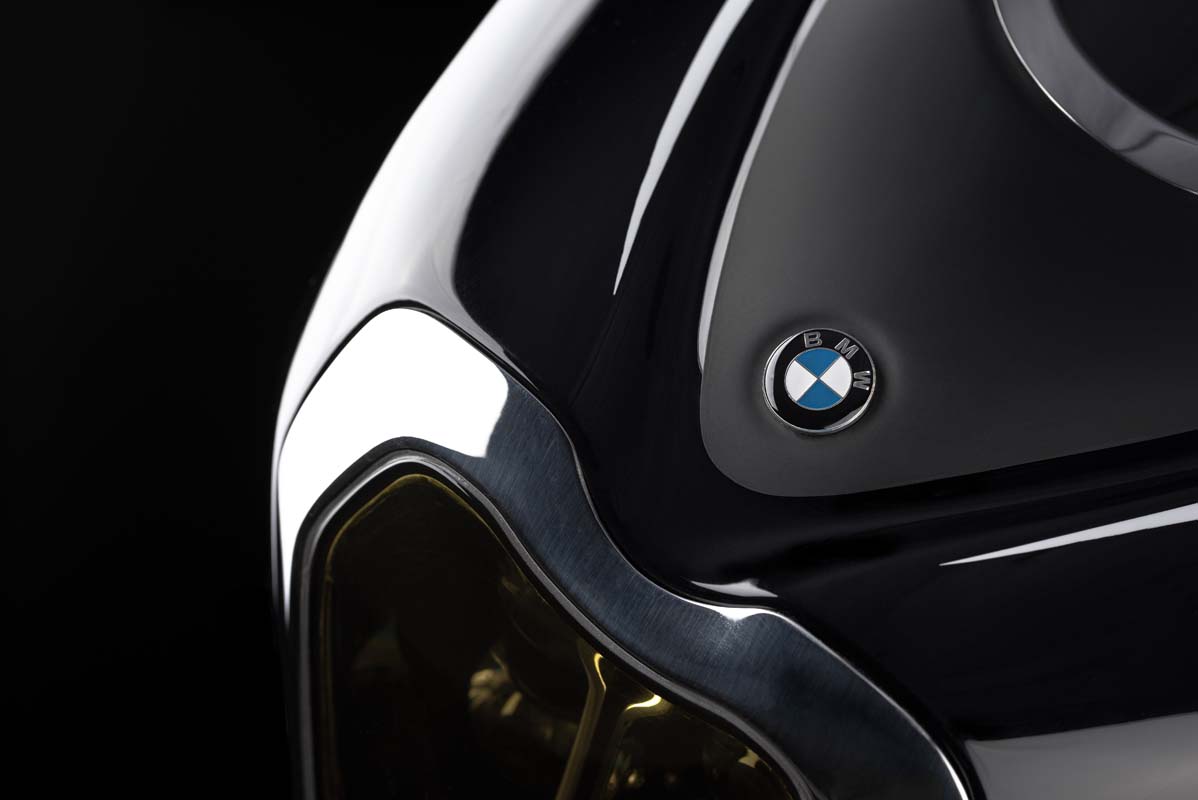 Like the headlight, the tail light that’s tucked under that heavily bobbed custom rear mudguard is a Kellerman unit, too.

The fuel tank on this creation has been narrowed at the rear, debadged and features subtle knee cut-outs and an aftermarket filler cap. Given Naumann’s skills in metal, we’d have loved to see him mock up a new exhaust, rather than retain the factory headers and fishtail silencers, but Naumann said he likes the pipes and mufflers as is, adding that they actually influenced elements of his design. Maybe we can look forward to some sinuous Blechmann pipes on the next build! 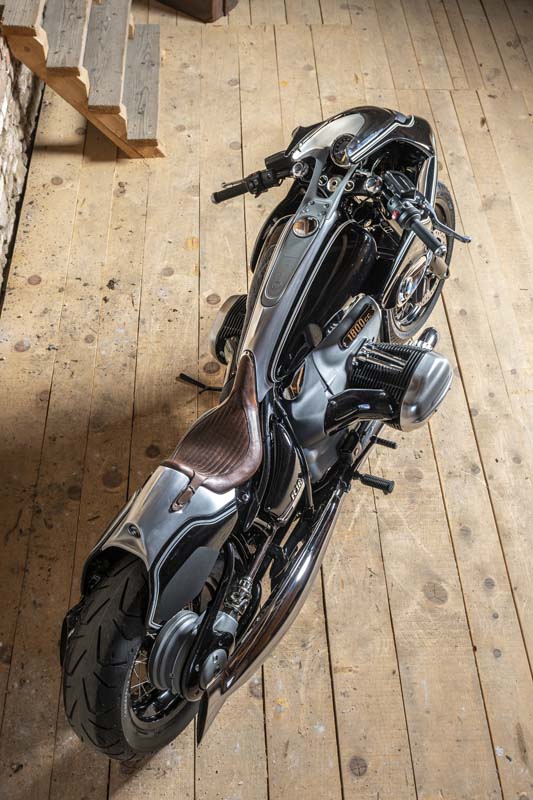 It almost escapes attention, but there’s a custom belly pan fitted, too, which like the rest of the tinware, is hand-shaped, but looks like it’s been cast in metal.

According to Naumann, 450 hours (around two months of regular work days) went into the Blechmann R 18 before it was completed last August. Love it or hate it, you have to respect the time and expertise that’s gone into it. You can’t deny that it’s unique, either.

Given its bagger looks, the Blechmann R 18 may inspire a less radical equivalent from BMW on the R 18 platform in the future.

That’s an interesting prospect, but we’re more interested in seeing what Blechmann builds next.