Harley-Davidson’s premium offerings, the CVO range, get a new look for 2022.

Now in its third decade, Harley-Davidson’s Custom Vehicle Operations (CVO) continues to lead the way in limited-edition, handcrafted factory custom motorcycle styling, pushing the boundaries of what can be achieved with paint, plating and other finishes. 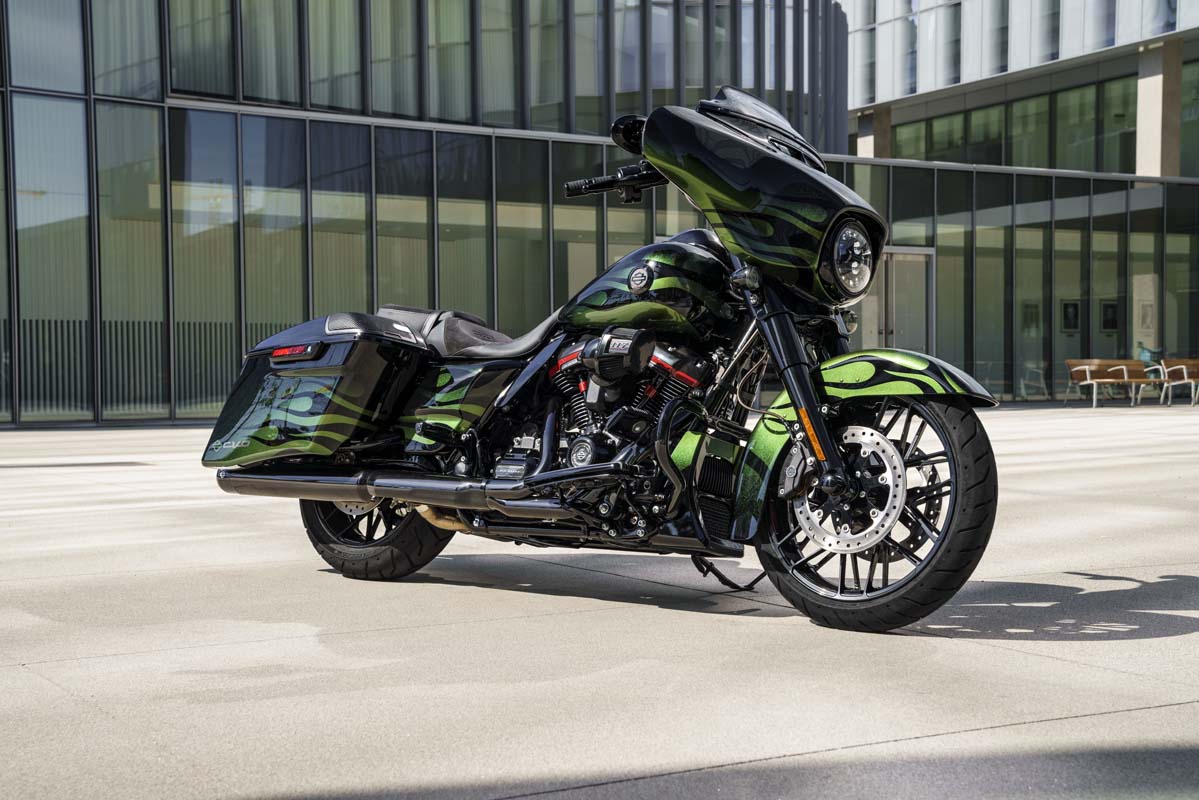 The attention to detail and custom finish that has defined the CVO lineup continues in 2022, with all-new paint options offered across the range. The Milwaukee-Eight 117 remains the standard powerplant, with a high complement of safety and rider-assistance features on each model.

Four of a Kind

This is only subtly changed from last year’s offerings, with the Ultra Limited-based CVO Limited dropped and the CVO Road Glide Limited returning to offer similar long-distance touring capability.

All four MY22 models are powered by the twin-cooled Milwaukee-Eight 117 v-twin, which up until this year, was only available in the CVO range. Now, Harley’s largest factory engine is also fitted to selected Cruising (AKA Softail) and Touring models.

However, Indian now have the advantage with their 108ci PowerPlus v-twin. The 90kW and 178Nm (122hp and 128lb/ft) maximums that the liquid-cooled PowerPlus produces outperforms the Milwaukee-Eight 117 in both power and torque, despite being of lower capacity.

So, with the Milwaukee-Eight 117 going to other Harley models and outperformed by a rival’s engine, does that mean a more powerful variant is coming from The Motor Company? Watch this space, but if it does, rest assured the CVO lineup will get it first.

As with the engines, much of the rest of the spec for the 2022 CVO range is carried over from last year’s models, including the Cornering Rider Safety Enhancements that combines cornering ABS with cornering electronically linked brakes, drag torque slip control, vehicle hold control and tyre pressure monitoring.

All MY22 CVO models get the Harley-Davidson Audio powered by Rockford Fosgate sound system (with speakers and amps designed specifically for H-D motorcycles) and Boom! Audio 30K wireless Bluetooth helmet headset for the Boom! Box GTS infotainment system; the latter previously only available with the CVO Tri Glide. Using Mesh Intercom Network protocols, the Boom! Audio system headset allows an almost unlimited number of riders to connect in public mode, while in private mode, up to 16 riders can connect at distances up to 8.05km.

LED lighting is standard, with the CVO Street Glide receiving the adaptive version of the Daymaker LED headlight that projects additional light, in harmony with the bike’s lean angle, to better illuminate the road ahead when cornering.

With the mechanical spec unchanged on the CVO models for 2022, the points of difference over last year’s offerings are mainly the paint options, all of which are new this year. These are complemented by decorative engine finishes, including a ‘scorched chrome’ treatment on selected models.

As in recent years, the meticulous, handcrafted nature of the paint on CVO models – we’re talking hand-painted pinstripes and detailed airbrush drop shadowing, for example - has seen Harley-Davidson once again turn to Gunslinger Custom Paint in Colorado to produce these special finishes.

“Gunslinger is our partner in custom paint that's been adding incredible artisanal techniques to our CVO arsenal for a long time now, and they're inspiring us to push the limits, so we try to do the same thing with them,” said Brad Richards, Harley-Davidson Vice President of Design.

“When most manufacturers are at the limits of a robot, Gunslinger can go in there with an artist who has the ability to brush by hand and deliver the sharpest pinstripe possible. That hand applied technique allows for very intricate two-tones, three-tones, airbrush drop shadows, and really transcends the ‘expected’ by delivering a truly custom look.”

In terms of CVO paint treatments this year, the standout is a ‘ghost flame’ finish that’s optional on all four 2022 models and used to particularly striking effect on the CVO Street Glide and CVO Tri Glide.

According to Harley-Davidson CMF Designer/Stylist, Ashley Nieman, hot rod-style ghost flames like this haven’t been used for a while, so were due for a comeback.

As an alternative (and something much more subtle), ‘Blue Steel’ is a new solid colour, available on the 2022 CVO Street Glide and CVO Road Glide, that’s matched to the “shiny black” scorched chrome engine finish.