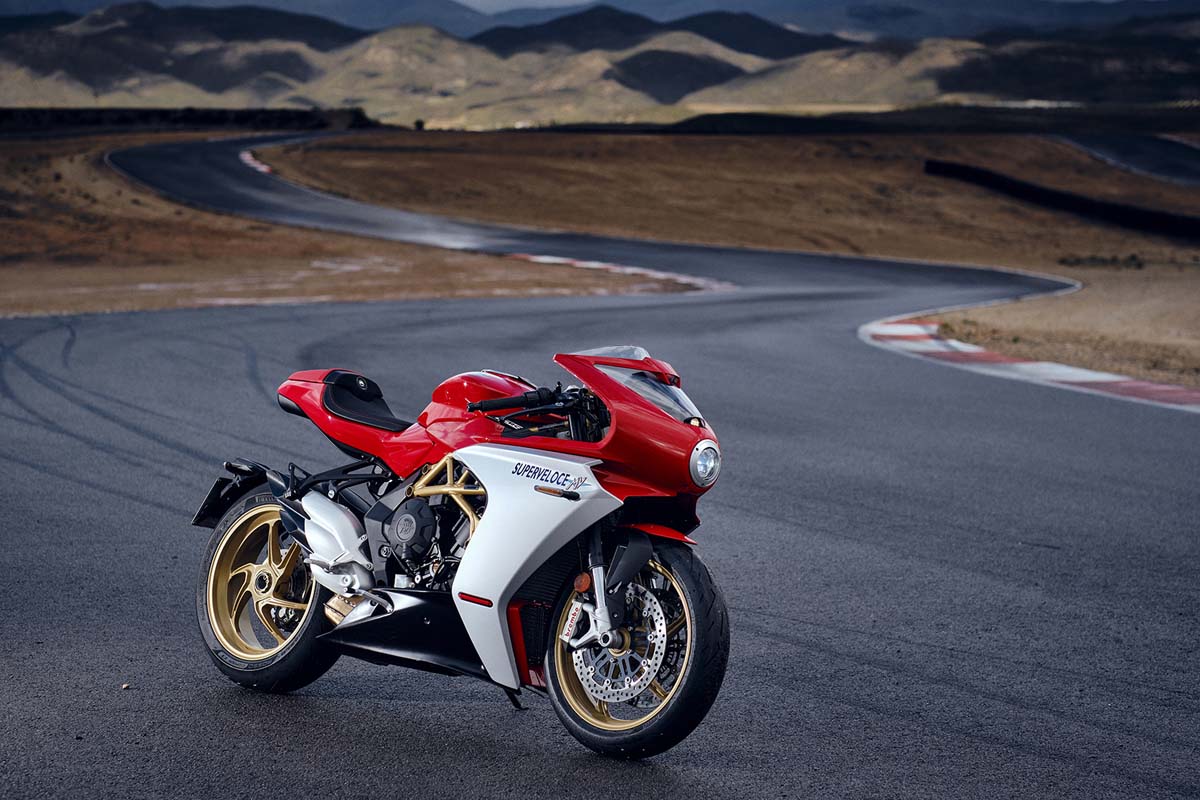 For the 2021 Superveloce 800, this stunning styling remains, but there have been updates to the engine and chassis, with the latest evolution of MV Agusta's MVICS electronic system also fitted. 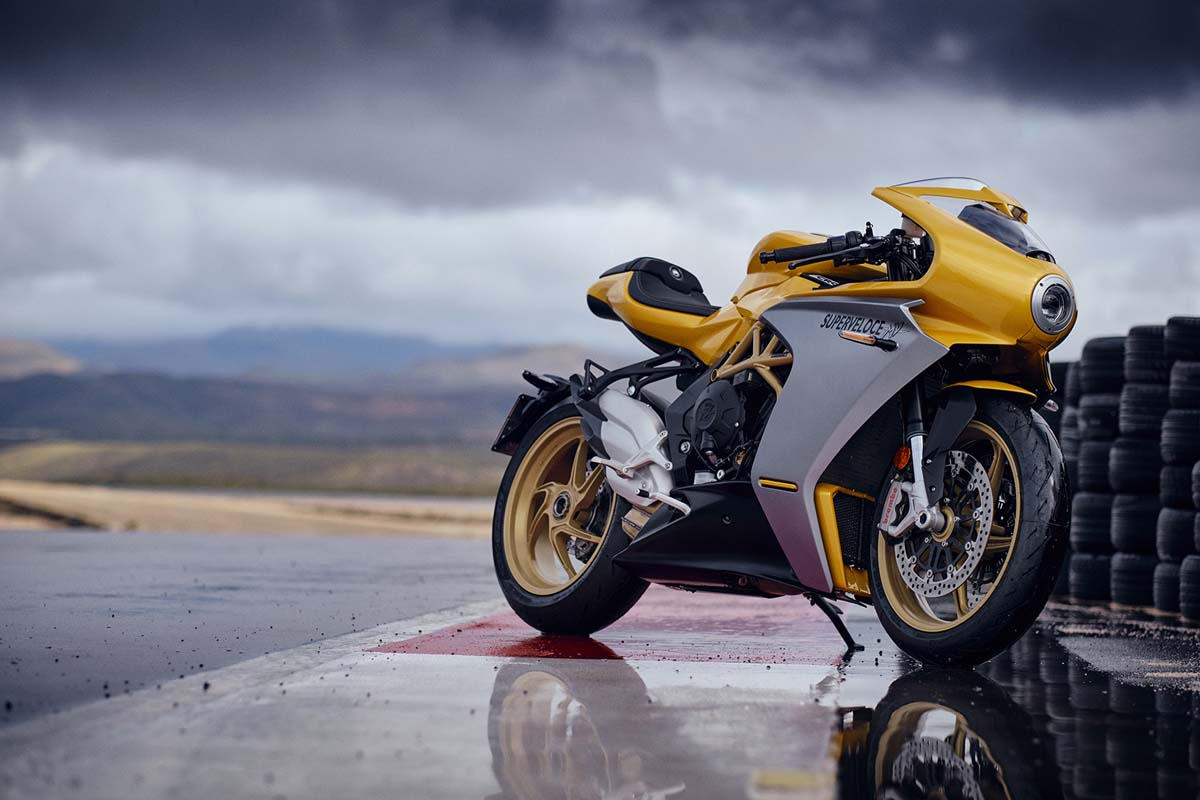 There are numerous updates and additions for the 2021 version, though, starting with the adoption of titanium inlet and exhaust valves, along with new sintered valve guides and DLC-coated bucket tappets to reduce friction. New crankshaft main bearings, piston rod and countershaft bearings have also been fitted with the same friction-reducing goal in mind.

A new twin-flow oil radiator has been added (reducing temperatures by a claimed 5 degrees), while modifications to the 3-1-3 exhaust’s collector have enabled power and torque curves to be optimised, so power is easier to manage. The exhaust silencer is of a new design, too.

Complementing the engine tweaks is a new clutch basket that MV claims has been optimised to improve clutch engagement, with a new up-and-down MV EAS 3.0 electronically-adjustable quickshifter added to the cassette-style six-speed gearbox. The new electronic gear sensor in this system – part of an upgraded electronics package for 2021 – is said to be more precise and more reliable.

Overall, while these changes don’t increase power, they are said to deliver better motorcycle operation and reliability, while remaining within Euro 5 emissions regulations.

Like the engine, the Superveloce 800’s chassis is mostly carryover from the F3 800, but the 2021 model adds redesigned side plates to the ALS steel tube trellis frame to increase torsional and longitudinal stiffness. 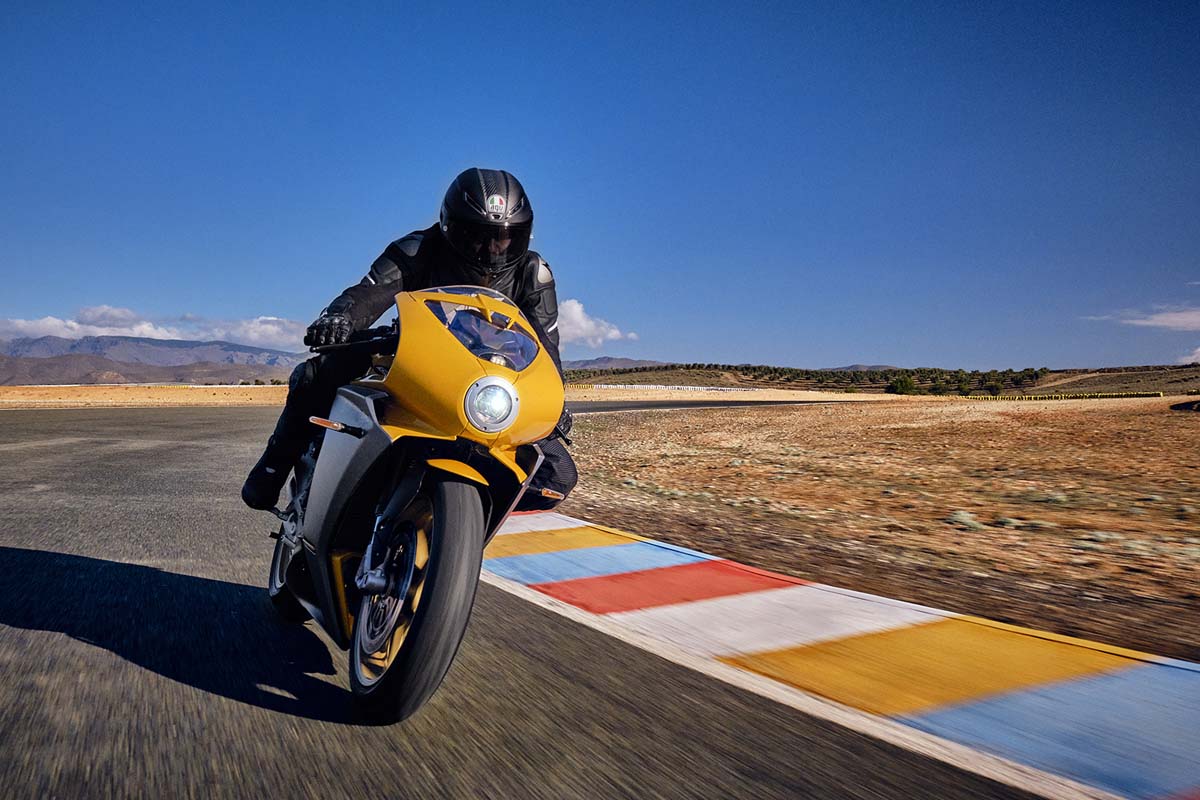 To this, Marzocchi 43mm USD forks are fitted up front, with a Sachs progressive monoshock at the rear. Both units offer full compression, preload and rebound adjustment, with 125mm of front travel and 130mm rear travel. Both of these are unchanged from the F3.

Brakes are per the F3 800, too, with dual 320mm front discs fitted with Brembo radial-type monobloc calipers at the front and a Brembo 2-piston caliper on the 220mm rear disc. What is new is a Continental MK100 ABS package with cornering functionality and RLM (rear wheel lift mitigation) as standard. 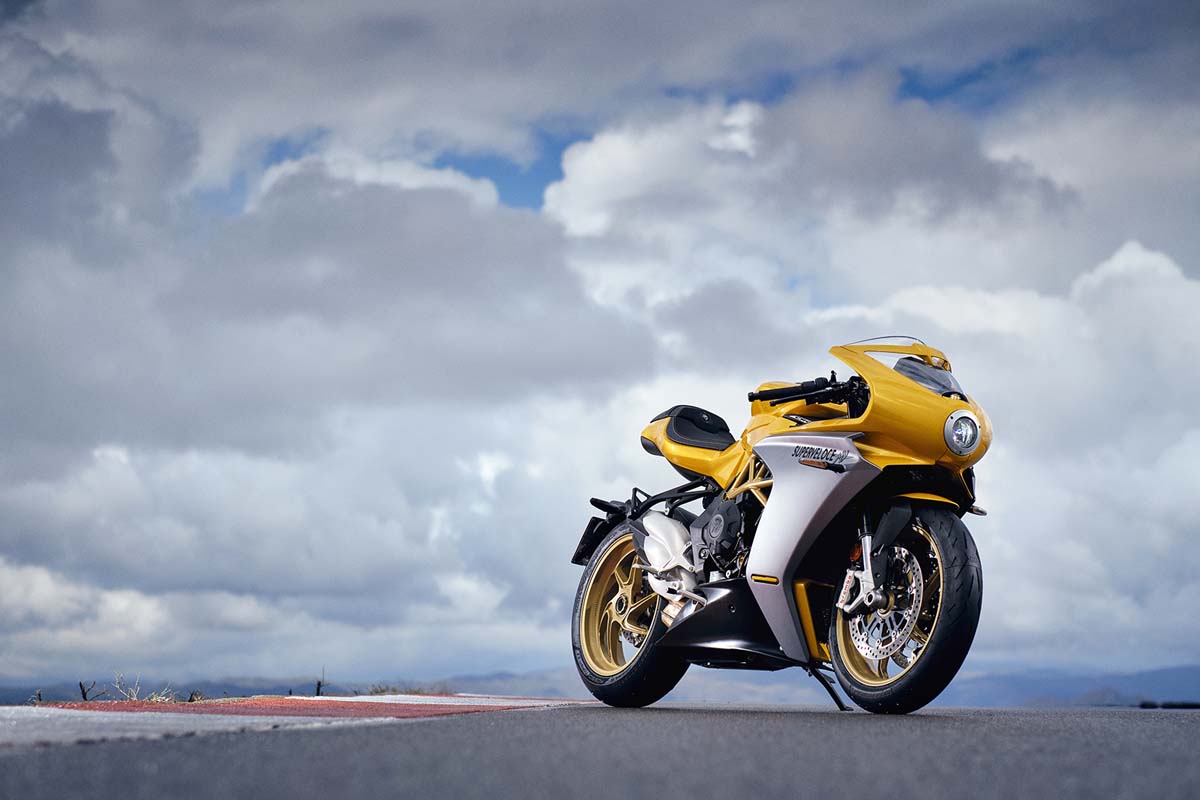 The 17-inch alloy wheels are carryover but finished in gold, while Pirelli Diablo Rosso Corsa II tyres are standard.

For all its performance, the Superveloce 800’s looks are its main selling point - and those looks are stunning. Proof of that is the fact the concept (which closely previewed the production model) won its class at the prestigious Villa d’Este international concours in 2019.

Arguably one of the best looking bikes to be released in the past decade, the Superveloce’s appearance is dominated by its sleek fairing and retro-look circular headlight.

Designed by the Castiglione Research Centre (CRC) and described by CRC Chief Designer Stephane Zache as “extremely Italian” and having “a timeless silhouette developed in the name of speed and characterised by clean, pure, aerodynamic, sensual surfaces,” the Superveloce’s shape wasn’t purely an aesthetic exercise – it was optimised in wind tunnel testing, too.

No visible fasteners on the fairing accentuates its smooth shape, which is complemented by the styling of the seat and tail unit, while the fuel tank is unchanged from the F3 800. 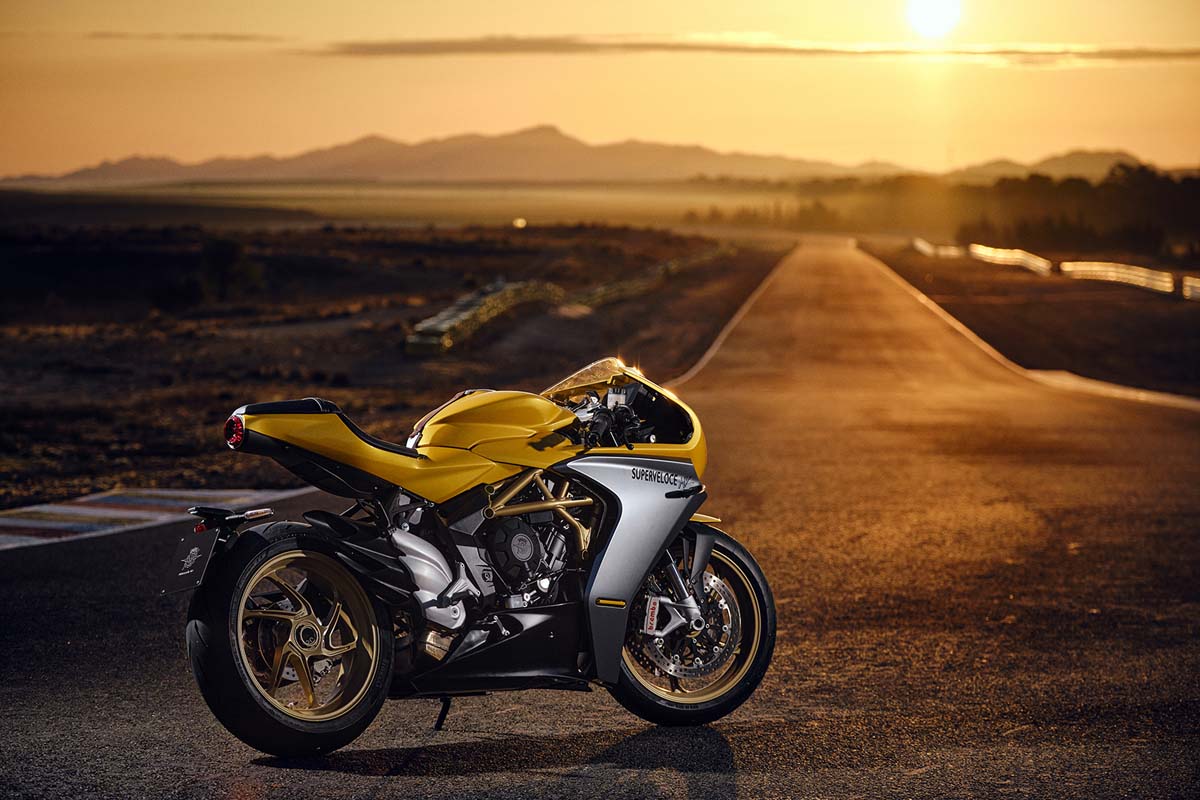 The bespoke bodywork has all the right curves in all the right places and obvious retro inspiration, but isn’t a clone of MV Agustas from the past. There are enough modern elements in the design to ensure the bike still looks like something from the new millennium.

Adding to the sleek lines of the bodywork are bar-end mirrors and selective use of colour, with the lower bellypan blacked out to accentuate the wing-like treatment of the main fairing.

While the fairing straddles classic and retro themes, a more deliberate classic touch is the leather tank strap that’s not functional, but is said by MV Agusta to evoke racing motorcycles of the 1960s and ’70s.

The headlight is a full LED unit, while a DRL resides not in the headlight itself, but separately on the windscreen’s lower edge. The tail light is a circular unit, too, with slimline indicators incorporated into the fairing and swingarm-mounted rear licence plate carrier.

For the Australian market, two colour choices are available – Ago Red/Ago Silver (like the F3 800) and Metallic Yellow/Matt Graphite. Both are matched to a gold frame and wheels, blackout engine treatment, a black seat, black fork legs and black detailing.

Unavailable in Australia, at least for now, is a an ‘S’ version of the 2021 Superveloce 800, finished in exclusive Surreal White and fitted with special spoked wheels and brown Alcantara seat trim. An optional racing kit for the Superveloce S comprises a remapped ECU, Arrow exhaust and pillion seat cowl.

Unlike the very limited edition Alpine and 75th Anniversary variants released previously, it seems that the Superveloce S will be a regular production variant.

For all its classic looks, the Superveloce 800 boasts a lot of modern technology, starting with a colour 5.5-inch TFT dash display that’s exclusive to this model.

Part of what’s described as an all-new electronics package for 2021, the revised dash display is joined by new handlebar controls, Bluetooth connectivity and GPS functionality via the MV ‘Green Box’ module.

An MV Ride App allows navigation mirroring from your smartphone, as well as the ability to send route maps and turn-by-turn instructions to the dash display. The app can also be used to record bike data on your rides, like rpm, throttle position and lean angle. Riding routes and other data can be shared with friends in the MV community. 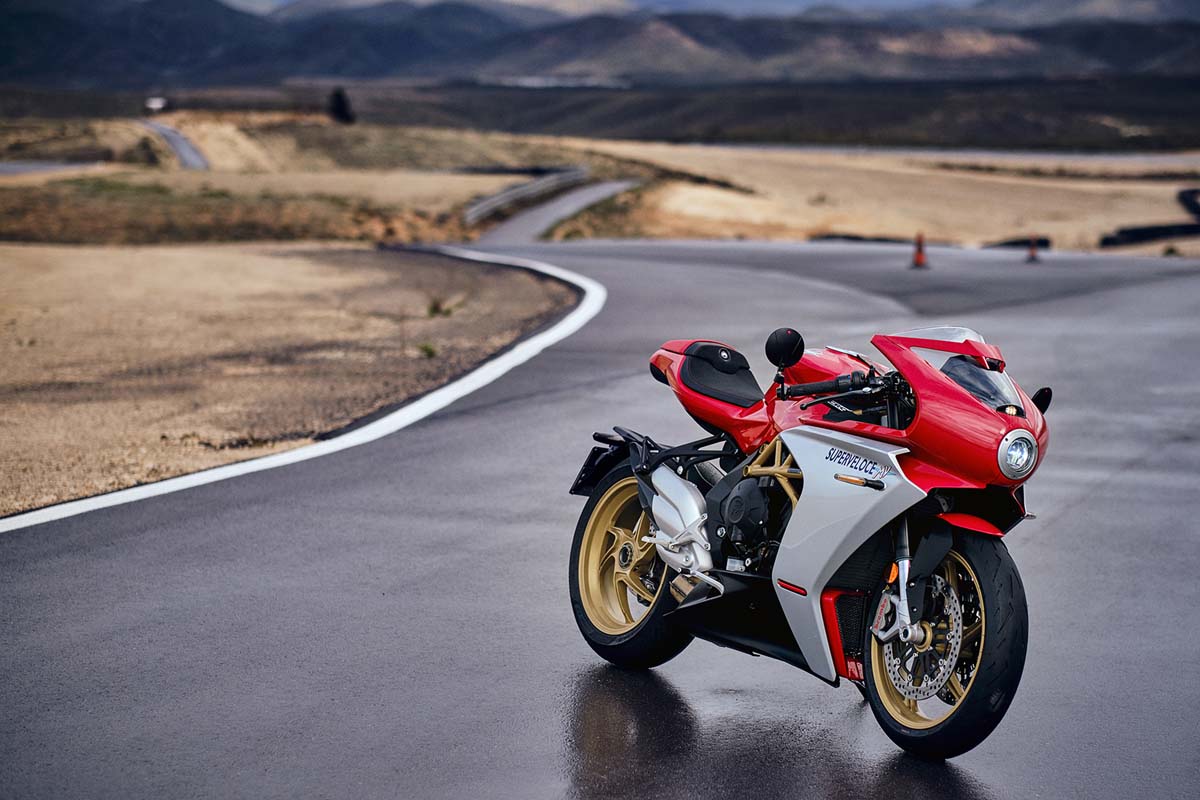 While traction control carries over from the F3 800, cruise control and launch control are exclusive to the Superveloce 800, as is a Mobisat anti-theft vehicle tracker.

Australian MV Agusta dealers started taking orders for the 2021 Superveloce 800 at the end of August, with local pricing listed at $38,990 ride away. This is a $12,000 premium over the base model F3 800 that the Superveloce shares many components with.

Despite what’s admittedly a steep price tag, the Superveloce shouldn’t have much trouble finding customers who appreciate – and can afford - a premium piece of motorcycling art.