Special editions of the V7 roadster and V9 bobber are being rolled out to mark Moto Guzzi’s 100th Anniversary.

Moto Guzzi fans have already got something to be happy about in 2021, following the announcement back in December that a comprehensively updated version of the V7 roadster is due for release soon. It’s also Moto Guzzi’s centenary in 2021, so there’s extra reason for ‘Guzzisti’ to celebrate, with a big centenary party - Giornate Mondiali Moto Guzzi (Moto Guzzi World Days) - scheduled to be held in Mandello del Lario, Italy, from 9 through 12 September.

With a centenary and a revamped version their most popular model to celebrate this year, it made sense to combine the two and Moto Guzzi has done exactly that.

Special, limited-edition ‘Centenario’ versions of the V7, as well as the related V9, have been produced to honour Moto Guzzi’s history and are finished in special ‘Centenario’ livery inspired by iconic models from the brand’s past. 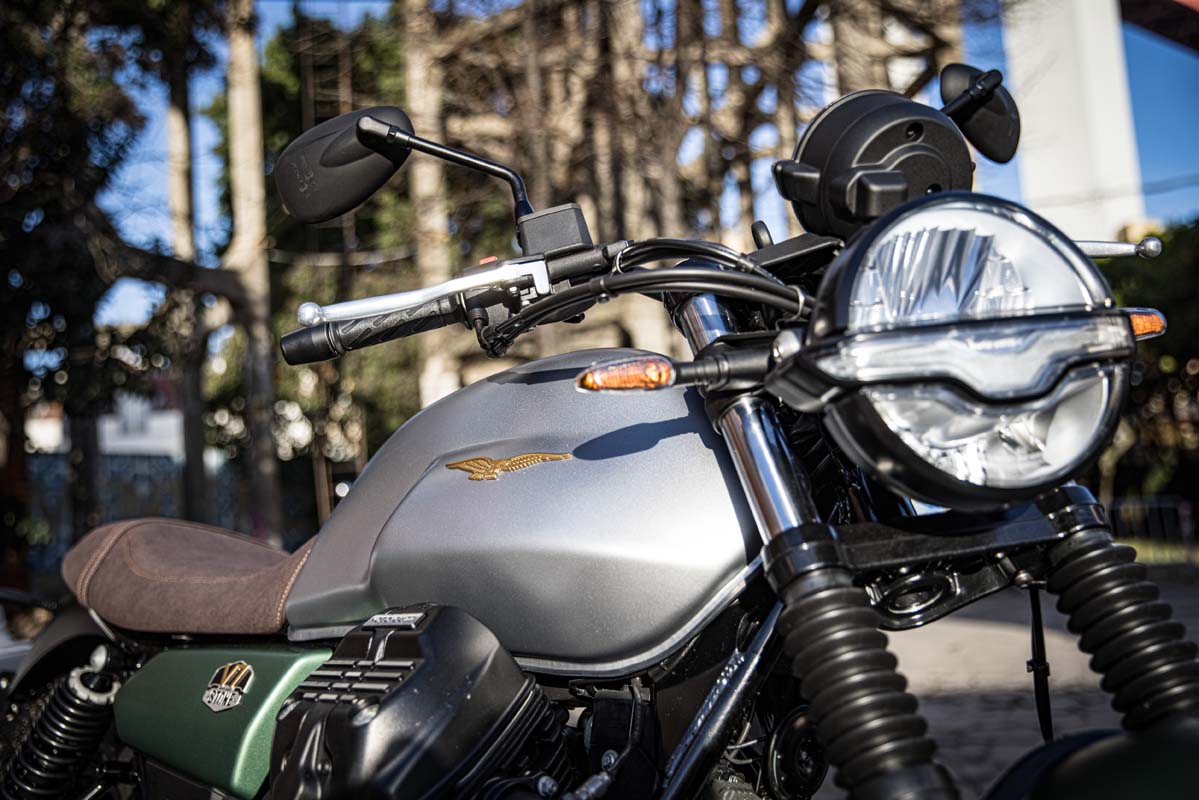 A Century of History

What we know today as Moto Guzzi was officially born on 15 March, 1921, when the "Società Anonima Moto Guzzi" was established with the goal of "manufacturing and sales of motorcycles and any other activity pertinent or connected to the metal mechanical industry".

The founders were Emanuele Vittorio Parodi, an Italian shipping magnate, his son Giorgio and Carlo Guzzi. Parodi and Guzzi met when serving in the Italian Air Corps in World War I, Giorgio as a pilot and Carlo as a mechanic. Both had a passion for motorcycles and had decided, even before the end of hostilities, that they’d form a company to build bikes.

There was an additional partner in this early phase, too; a fellow air force pilot named Giovanni Ravelli. The trio of young enthusiasts figured they had all aspects of the business covered. Guzzi would be the engineer, Parodi the financier and Ravelli the test rider and racer.

Development of a prototype, funded by Giorgio’s father, started in 1919, but Ravelli would never get to test it as he was killed in a flying accident that year. The fledgling business pressed on without him, but Giorgio and Carlo decided their first motorcycle would bear the Italian Air Corps’ eagle motif in honour of their friend.

That prototype, a 500cc horizontal single employing elements of aeronautical engineering, was completed in 1920. Initially, the bike bore the name ‘G.P.’ for Guzzi-Parodi, but Giorgio Parodi rejected that as he feared it would be confused with his own initials. Thus, Moto Guzzi was born.

The G.P. was quickly followed by the ‘Normale,’ which was less complex and thus simpler and cheaper to manufacture. This first production model gave birth to the Società Anonima Moto Guzzi in 1921. Only 17 motorcycles were manufactured in that foundation year, rolling out of a 30 square metre factory at Mandello del Lario on the shore of Lake Como in northern Italy.

That small facility is still in existence 100 years later as part of a much larger complex, while Moto Guzzi has been a part of the motorcycling landscape for the same period.

The Moto Guzzi Normale from 1921 was painted in a distinctive green that partly inspired the livery of the upcoming V7 and V9 Centenario, but more specific inspiration has come from Moto Guzzi’s rich heritage in racing.

Never afraid to try something new, or to push the boundaries of engineering, Moto Guzzi trialled various multi-cylinder configurations, including twins, triples and a supercharged four-cylinder, before the transverse v-win became the company’s staple powerplant.

Three-wheelers were built, too, including a military model that offered three-wheel drive and was powered by an engine that would later appear in the original V7 from 1965.

While some of these developments and experiments were in response to consumer demand and government contracts, many were driven by racing. Moto Guzzi was heavily involved in competition from the mid-1920s through to 1957, with Aussies Ken Kavanagh and Keith Campbell on the roster of works riders in the latter years. 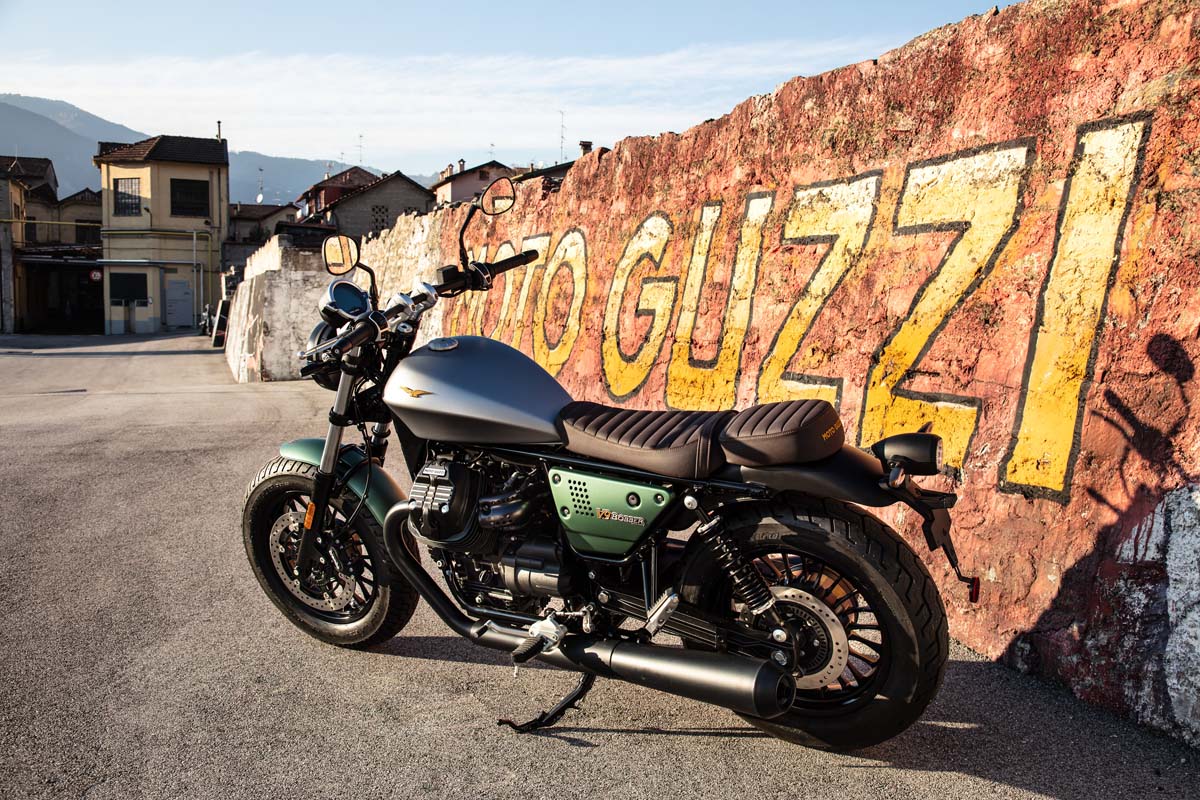 Of those experiments, perhaps the greatest of all came in 1955 when Moto Guzzi released the ‘Otto Cilindri’ that, as the name indicates, was powered by an eight-cylinder engine.  Designed to compete against the dominant MV Agustas and Gileras in the 500cc class, the engine was of V8 configuration. Compact and powerful, the V8 never lived up to its potential, but remains a standout amongst the engineering innovations in Moto Guzzi’s back catalogue.

The V8 was fitted with a dustbin fairing (the new fad in 500cc competition back in the mid-1950s), that was painted in a distinctive green, with the frame in black. A similar combination could be found on other Moto Guzzi racing models from the same period, like the Bialbero 350cc single, which won five consecutive World Championships from 1953.

Being an engineering project first and foremost, the V8’s aesthetics were driven by its function, so the fuel tank was left in bare metal and the saddle in natural leather. These elements in particular would inspire the finish in the Centenario models.

In creating the special Centennial models, Moto Guzzi’s in-house styling centre took inspiration from their iconic race bikes like the V8, as well as the Normale that started it all 100 years ago.

The 2021 limited-edition V7 Centenario and V9 Centenario both feature satin metallic silver paint on the fuel tank that echoes the V8’s bare metal look, with a distinctive satin green metallic applied to the side covers and front mudguard. Completing the homage is leather seat trim with a distressed look and contrast stitching that includes Moto Guzzi identification at the rear.

Each model also features a golden version of the Guzzi eagle tank badge (normally silver or black), while centennial branding features on the front mudguard.

In all other respects, the V7 and V9 Centenario are as per their regular production counterparts. 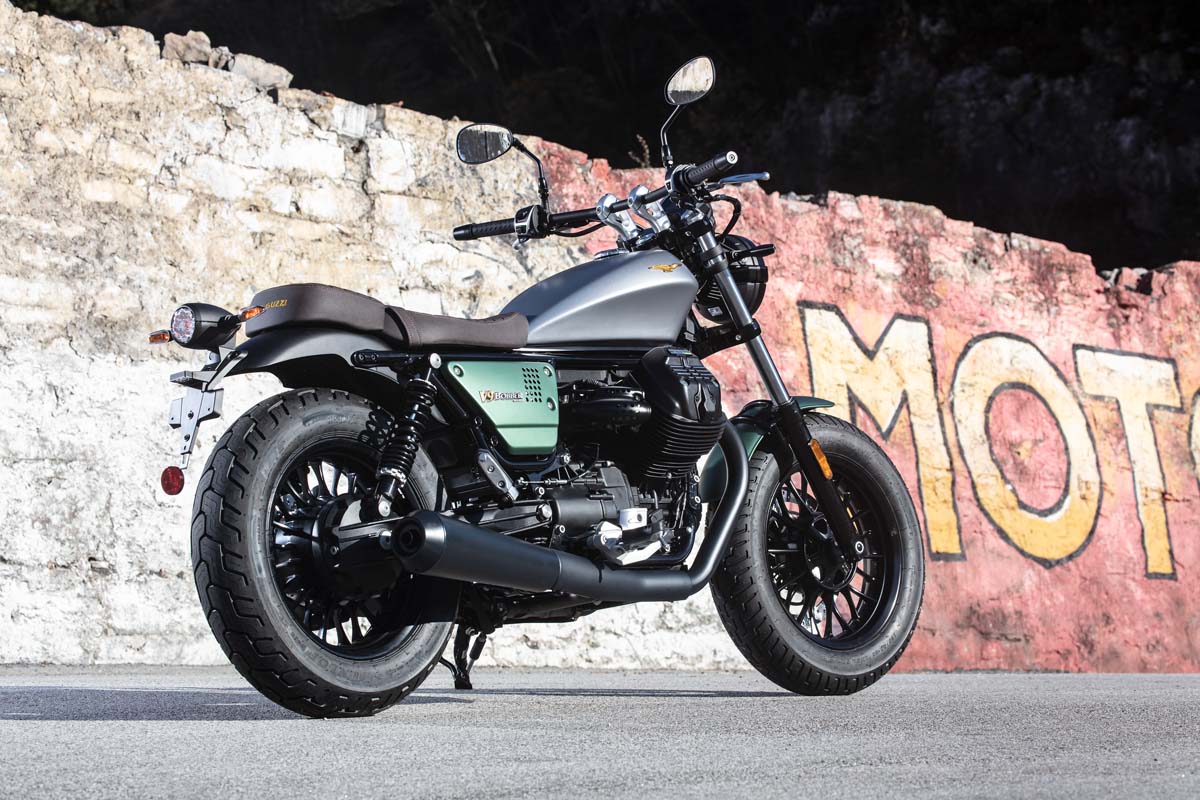 The V7 Centenario is based on the V7 Stone, with its blackout engine, exhaust and wheels. It receives the 853cc engine introduced this year, as well as a wider rear wheel, upgraded rear suspension, new headlight with ‘eagle’ DRL insert, new sidecovers and all-new digital instrument pod, all of which are part of the MY21 V7 spec.

For the V9 Centenario, the Bobber variant is the base, which runs the same 853cc twin recently introduced on the V7. Like the V7 Stone, the V9 Bobber features a blackout treatment on the engine, exhaust and wheels. This model also features the same LED headlight and LCD instrumentation as the V7 Stone, as well as the option of the MIA multimedia system that links the bike to your smartphone.

The 2021 Moto Guzzi V7 Centenario and V9 Centenario are due for release in May. Being limited editions, only small numbers are expected to be available locally, so interested customers are advised to get in touch with their Moto Guzzi dealership to pre-order and get more information.

The limited-edition will attract a price premium, too. No pricing for the Centenario had been released at time of writing, but expect something around the $18,000 mark for both versions. Again, see your Moto Guzzi dealer for more details.