While many motorcycle manufacturers build a racebike for the road, KTM have built a racebike . . . for the racetrack.

In less than 12 months, KTM have gone from also-rans in MotoGP to multiple race winners, with the confidence in their racing programme reflected in the release of a track-only limited-edition – the RC 8C. 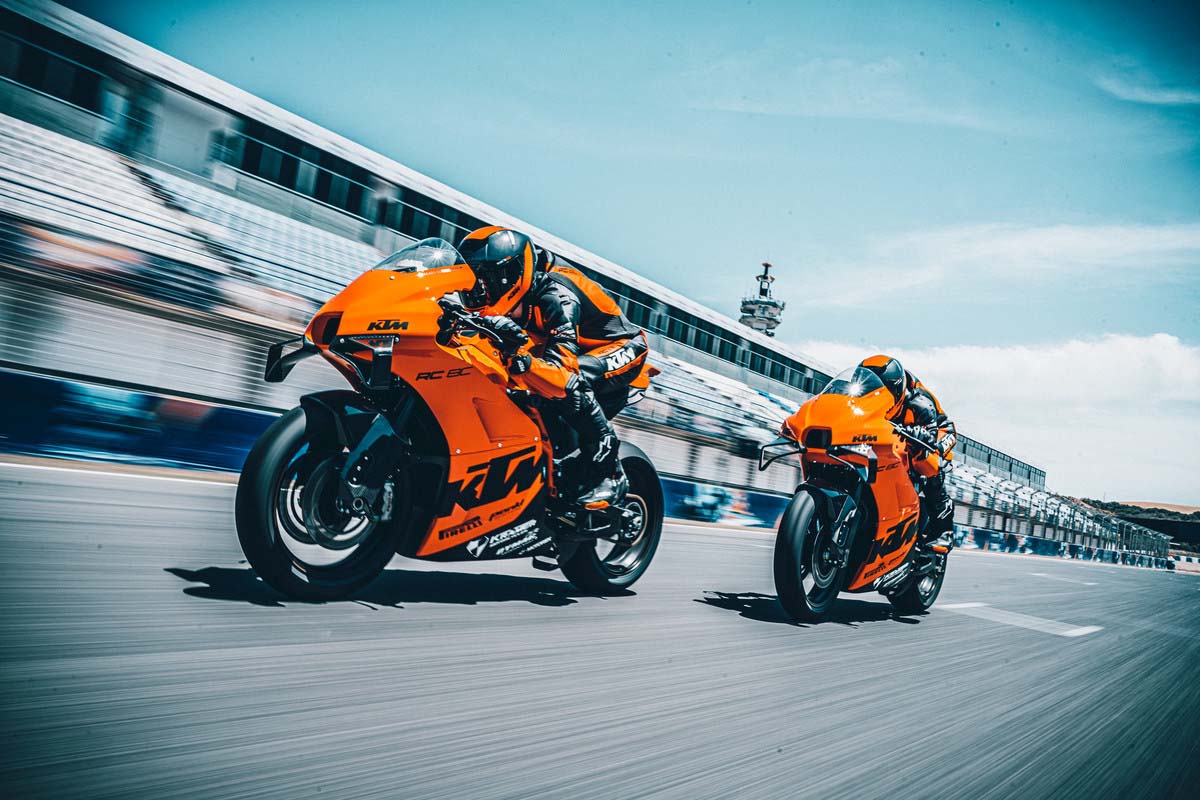 At the beginning of last year’s MotoGP season, KTM had gone winless in three full years of premier class competition, with only one podium – a third place, delivered by Pol Espargaro in 2018 – to show for their efforts. That all changed in season 2020.

Blame the disruption caused by COVID-19, the absence of Marc Marquez or other factors, but a lot seemed to go right for KTM Factory Racing last year.

Brad Binder scored KTM’s breakthrough premier class win at Brno in August, Miguel Oliveira of the satellite Tech 3 team won two rounds later in Spielberg and again at the season finale at Portimao, while Pol Espargaro racked up a string of third-place finishes in what would be his final season with the factory KTM team.

This year, the hits have kept on coming, with wins for both Oliveira and Binder at time of writing; the latter achieved in a nail-biting finish, tiptoeing around a wet track on slicks.

Even before these most recent heroics for KTM Factory Racing, they’ve been capitalising on their competition successes with the release of special edition motorcycles, like the 450 Rally Replica. Now, they’re doing the same thing with a circuit racing special edition, inspired by their RC 16 race winner in MotoGP.

The ‘RC 8C’ is a limited-production motorcycle, made to satisfy what KTM say are the “apex-slaying needs of orange-bleeding track warriors”.

Built around the LC8c parallel twin used in the current 890 Duke and 890 Duke R performance naked bikes, the RC 8C wraps a bespoke frame around that torquey 889cc engine and tops it with special aerodynamic bodywork and high-end racing componentry.

Strictly a track-only bike, the RC 8C is described by KTM as being hand-built and the closest thing you can get to a factory race bike without a contract from Pit Beirer in your pocket. And as its running gear is based on production componentry, you won’t need a specialist race team – or a bottomless wallet - to maintain it.

The RC 8C manages to extract a little more, with maximum power of 95.4kW (128hp). Where that peak is delivered is unrevealed, as are other elements, like the engine’s redline and maximum torque, although some reports list the latter as 101Nm. KTM haven’t released a full spec sheet, so some features remain unknown at time of writing.

While the RC 8C’s peak power is only fractionally more than that of the 890 Duke R, it’s propelling a bike that’s significantly lighter. Listed weight is 140kg dry, which is a full 26kg lighter than the production 890 Duke R. 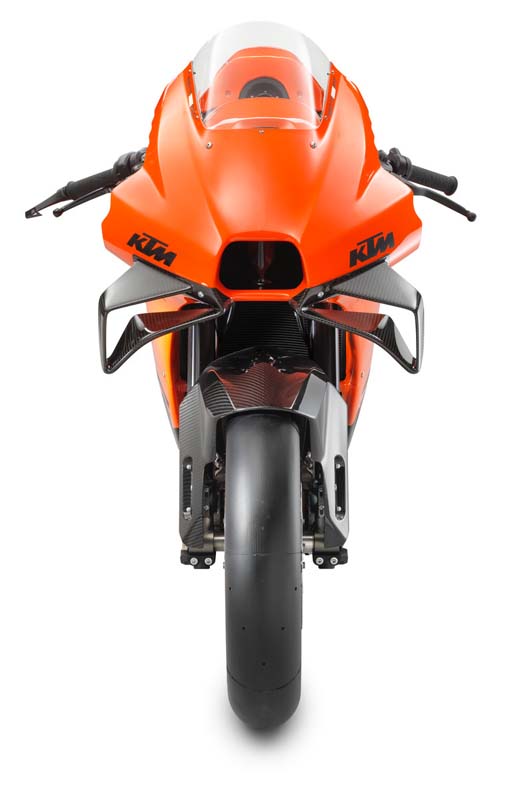 One of the keys to achieving that significant weight reduction is the deletion of all the paraphernalia required for road legality – from headlights to number plate brackets – as well as a frame that’s unique to this model and made from 25CrMo4 steel tubing.

The bodywork is made from carbon Kevlar-reinforced fibreglass, with carbon fibre used in selected areas, including the front winglets and front mudguard.

To the RC 8C’s bespoke frame, KTM have added a selection of high-end components, starting with WP Pro suspension.

On the front end, there’s a hand-built WP Apex Pro 7543 43mm fork made from high quality, lightweight materials. This closed cartridge fork has been developed from experience gained across KTM Factory Racing efforts in a number of international championships.

The front suspension is assembled in the same department at KTM’s Mattighofen HQ that also builds and maintains the suspension of the RC 16 MotoGP bikes, so performance is at the level required by race-oriented motorcyclists and professional racers. According to KTM, this fork also boasts zero hydraulic stroke limitation, meaning riders can continually control the damping properties.

At the back end, there's a WP Apex Pro 7746 monoshock with preload adjuster and separate high and low-speed compression/rebound settings, so it can be adjusted to suit individual rider preference and track requirements, too. There’s also a WP Apex Pro 7117 steering damper fitted as standard. 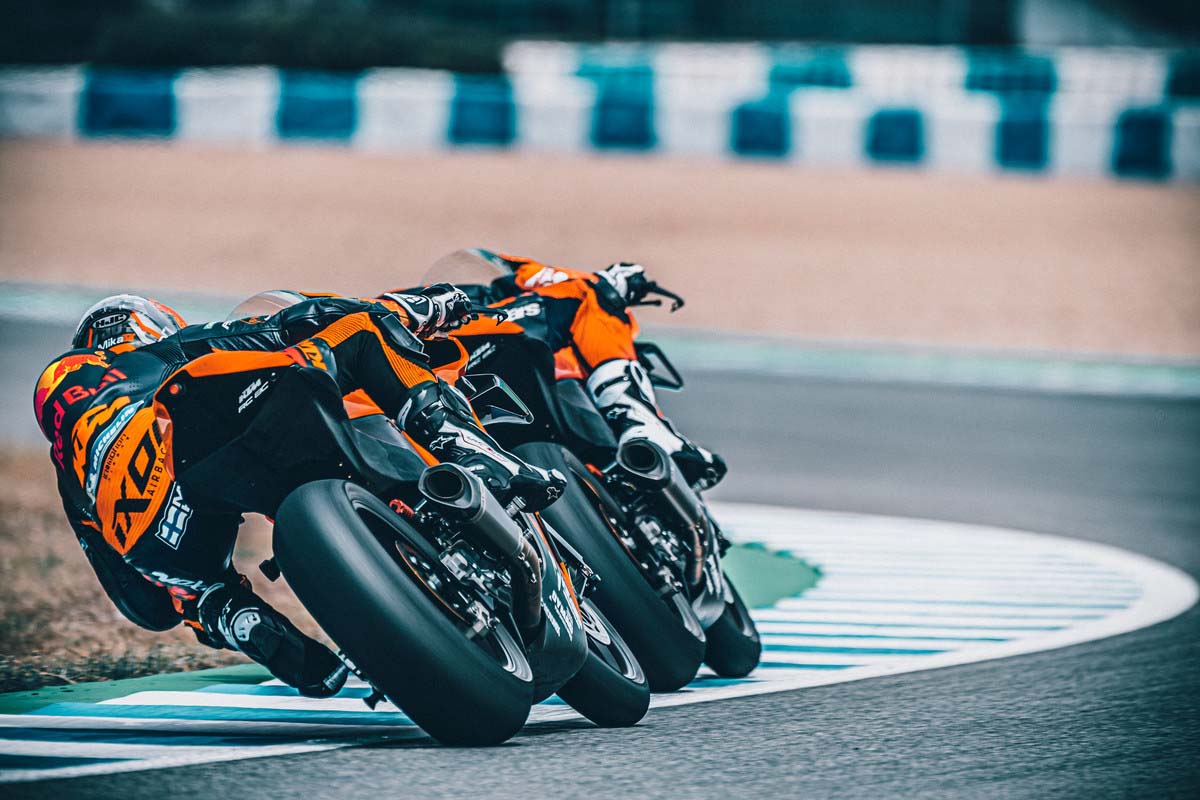 The selection of premium componentry continues with the brakes, which consist of Brembo Stylema calipers on the dual 290mm full floating front brake discs, with a Brembo 2-piston caliper on the 230mm full floating rear disc. According to KTM, the rotors are made from aluminium, which presumably is specially heat-treated to prevent the discs melting under high-performance track applications. 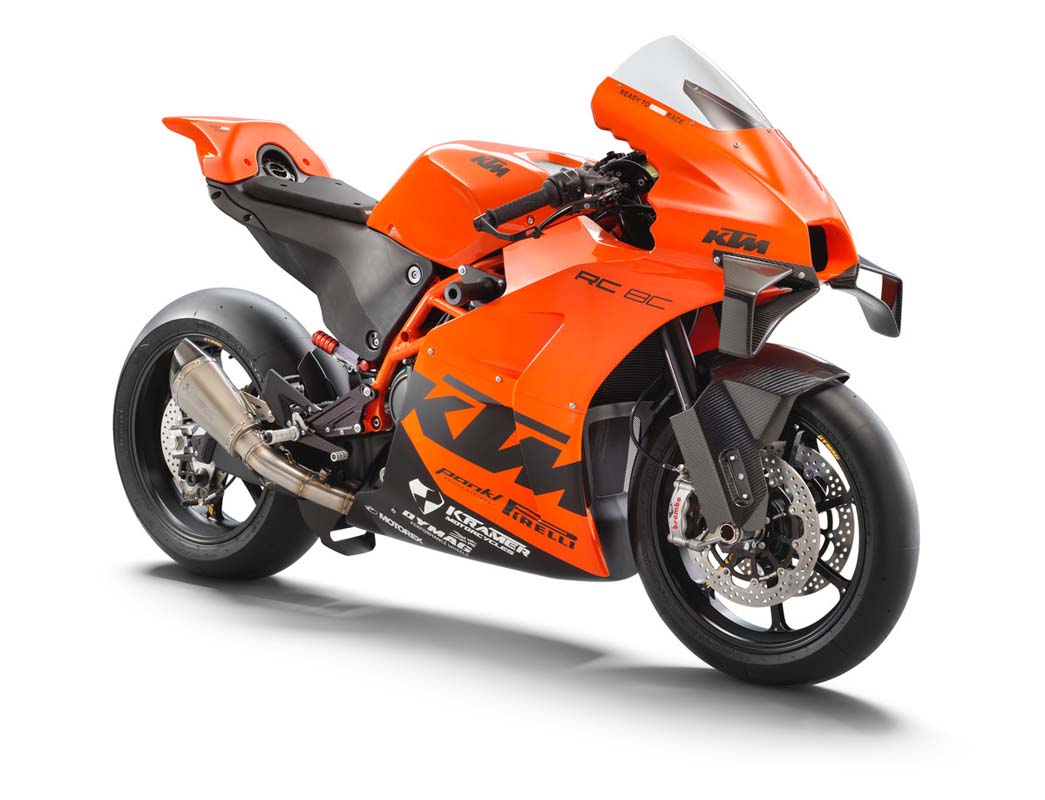 To this package, KTM have also added a Brembo 19RCS Corsa Corta radial master cylinder, which draws from MotoGP practice in selected technical solutions, including the ability to tailor the “bite point” of the brakes to suit individual preference via a three-position adjustable selector on the top of the master cylinder. 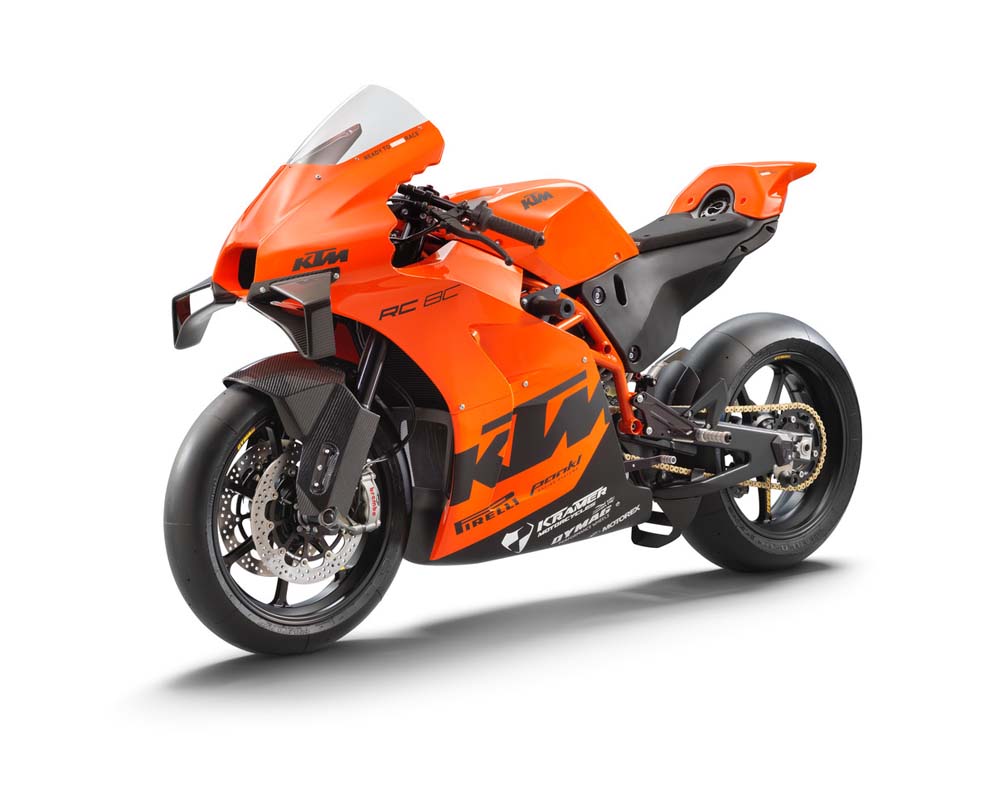 A set of Dymag wheels are standard and, despite their carbon fibre look, are actually made from lightweight aluminium. These are shod with Pirelli SC1 slicks.

Given the racing applications for the RC 8C, the fuel tank (which resides in the seat) and lightweight bodywork are attached with quick-release fasteners.

Finally, to collect lap times and other data at the track, the standard specification includes an AIM MXS 1.2 RACE dashboard and data logger with integrated GPS function. Information gathered by this data logger is displayed via a 5.0-inch TFT screen with integrated data recording, which is continually logged and can be analysed in the pits using AIM Race Studio.

KTM committed to building only 100 units of the RC 8C for release worldwide, with pre-orders opening on 22 July.

Despite a price tag of US$38,999 (AU$54,650 approx.), the full complement of 100 units was accounted for in less than five minutes when the ordering website opened – 4 minutes and 32 seconds, to be exact. How many – if any - of the 100 were purchased by Australian buyers is unknown.

To an even more select group of RC 8C buyers, KTM also offered an optional “race track experience” that included a trackday event at Jerez. This was limited to just 25 customers and provided the opportunity to ride with KTM Factory Racing test riders Mika Kallio and Dani Pedrosa when they pick up their bike.

In addition, the racetrack experience also came with a package of trackday accessories that included an extra set of wheels and brake discs, tyre warmers, front and rear paddock stands and a KTM-branded pitbox carpet.
Given the rapid – like, really rapid – take-up of the RC 8C, here’s hoping KTM may be inspired to bring a road-legal version to market.