The first KTM to wear the ‘RR’ badge, the new variant of the 1290 Super Duke runs the same basic engine, gearbox and frame as the ‘R,’ but gains Euro5 compliance, is significantly lighter and brings in a raft of new and upgraded premium components.

At 180kg dry, the RR is a full 9kg lighter than the already light 1290 Super Duke R it’s based on. Weight has been cut in a number of areas, but the greatest saving comes through the adoption of a lithium ion battery, which saves 2.5kg, while the 17-inch wheels are new lightweight forged alloy rims that shed 1.5kg.

The RR’s other major weight saving comes from the adoption of carbon fibre wherever possible, from the chainguard to the ignition lock and what little bodywork there is. More notable, though, is the adoption of carbon fibre for the subframe. Fastened to the chromoly main trellis frame with aluminium supports, the new subframe tips the scales at a featherweight 850 grams. 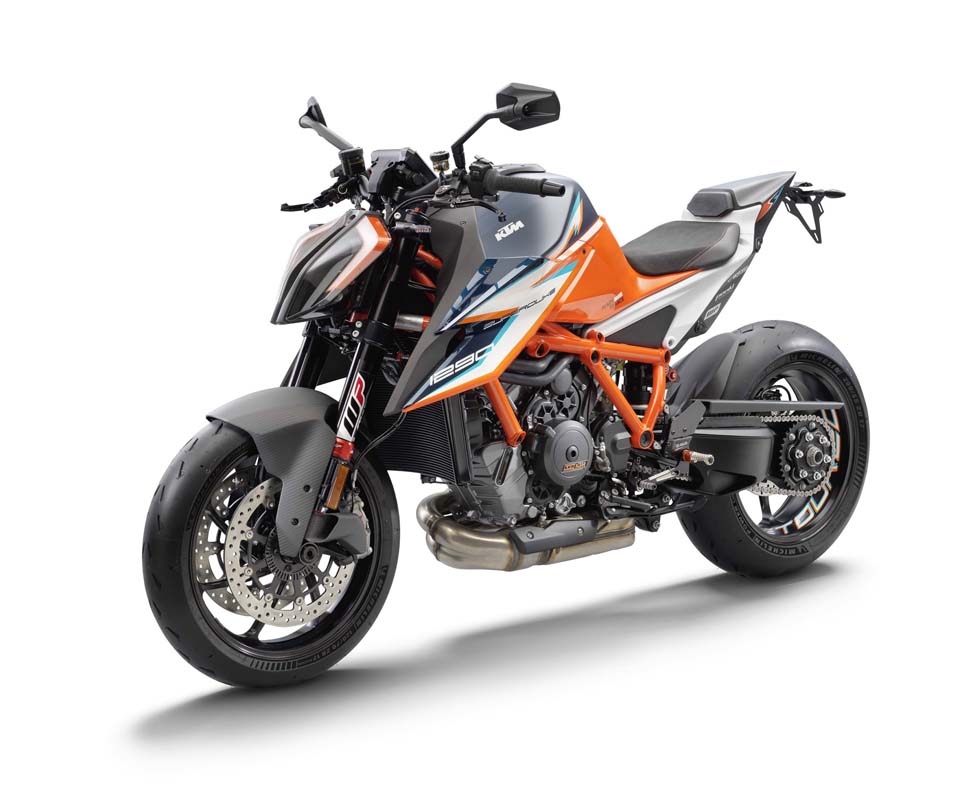 A byproduct of choosing carbon fibre for the subframe is that the RR is strictly a single-seater, so the seat and tail have been redesigned to suit, with combined tail/brake light and indicators slimming down the look of the back end. 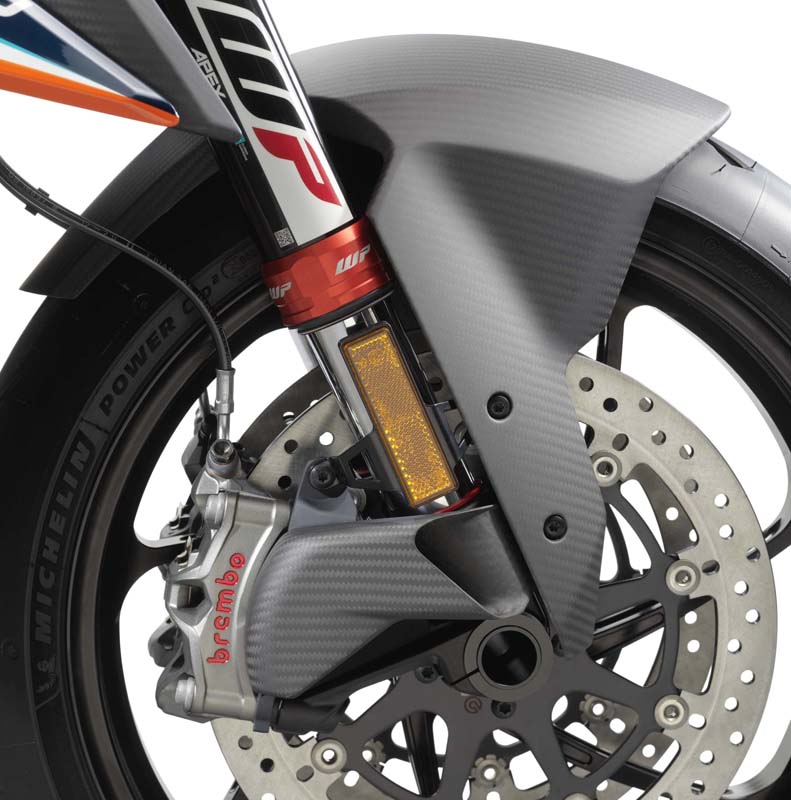 At the rear, an APEX PRO 7746 adjustable monoshock has been custom-made to suit the RR and was developed with input from world championship and factory riders.

Listed travel is 130mm for the front, which is a 5mm increase on the standard 1290 Super Duke R, while 140mm rear travel is unchanged, but the rear shock length can be adjusted from 353mm to 360mm. 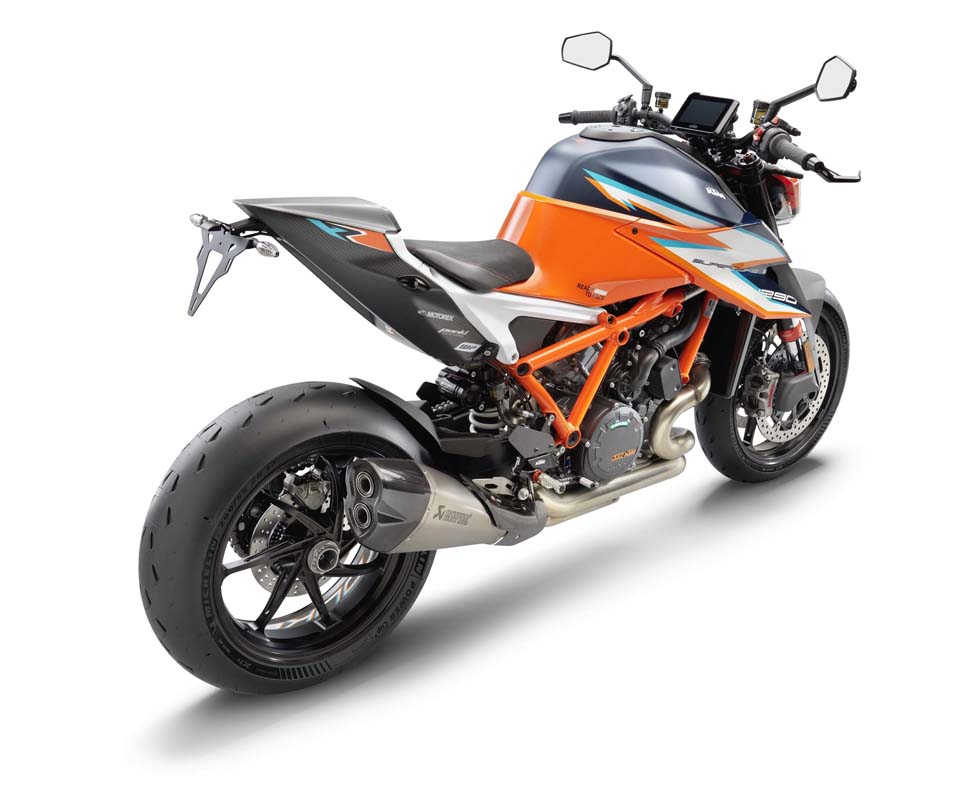 Other premium componentry includes Brembo brake calipers, with four-piston Stylema monobloc units on the dual 320mm front discs and a two-piston caliper on the 240mm rear disc. But it should be noted that this is unchanged from the 1290 Super Duke R.

The RR does introduce stickier rubber, though, in the form of Michelin Power Cup2 tyres, instead of the R’s Bridgestones.

Powering the 1290 Super Duke RR is KTM’s established LC8 1301cc v-twin, which was recently upgraded for the R. No changes in capacity or output have been made for the RR, so maximums are unchanged - 132kW at 9500rpm and 140Nm at 8000rpm. However, all that lightweighting means that the RR boasts a power to weight ratio of 1:1, while achieving Euro5 emissions compliance. 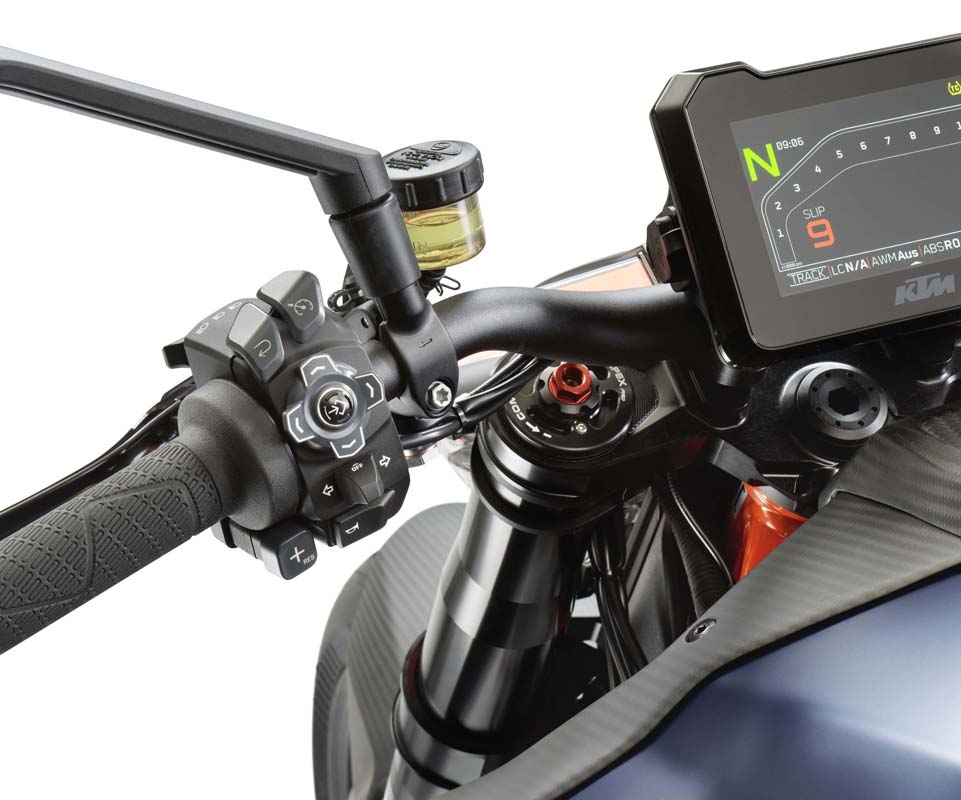 As much as this package is designed for knee-dragging trackday fun, KTM says the RR remains usable for commuting, too.

Similar to the engine, the 1290 Super Duke R gearbox has recently been updated, so no major changes have been made for the RR. Those updates included quicker shift times for the six-speed and lighter lever action from the PASC slipper clutch. 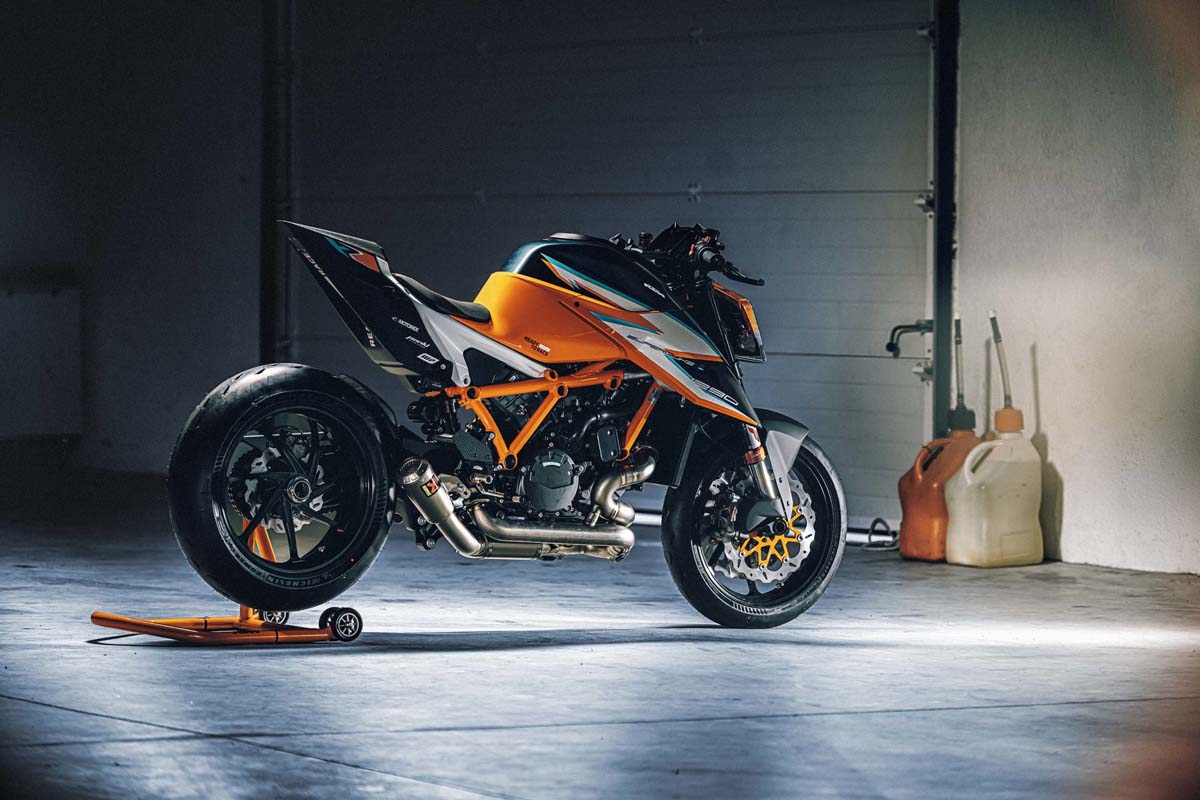 What is new is the throttle, which is still a ride-by-wire unit, but now has a 65-degree opening angle – a 7-degree reduction over the 1290 Super Duke R’s 72-degree grip. KTM say this race-derived quick turn twist grip was developed to deliver improved throttle response, while also reducing the rider’s wrist angle and elbow drop at full opening.

To suit the RR’s focus on performance, the riding modes have also been revamped. Existing Rain, Road and Sport modes carry over, but have been adjusted to minimise input from rider assistance systems like cornering traction control and anti-wheelie control, allowing experienced riders to best enjoy what the RR has to offer. Performance and Track modes that were optional on the R are standard on the RR, and have also been adjusted to suit. 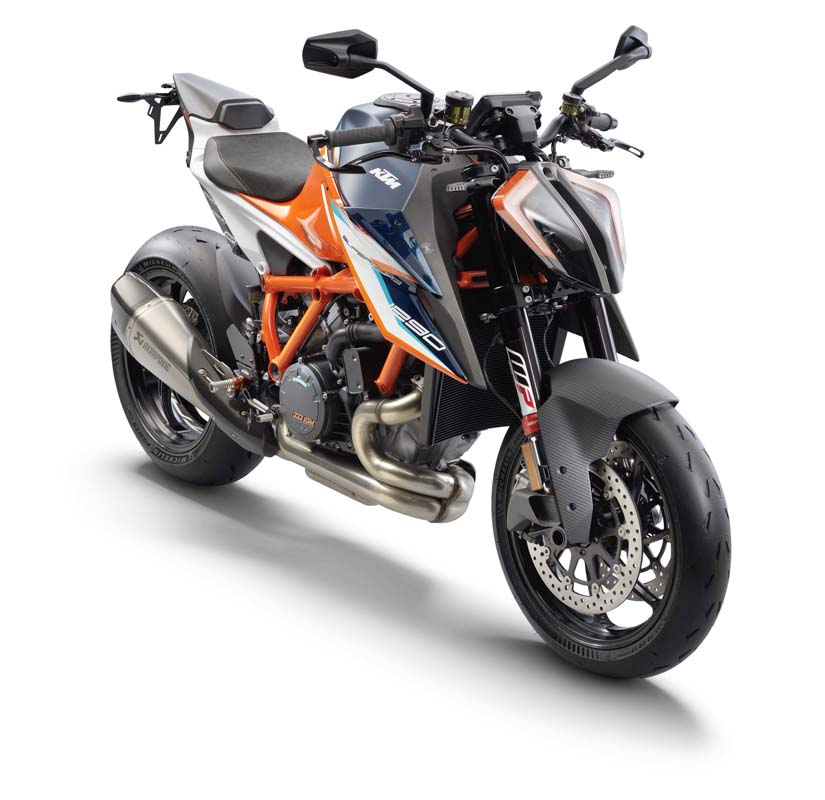 Performance, as the name suggests, unlocks more of the LC8 engine’s potential. Designed for aggressive street riding, this mode allows the traction control to be dialled back and the launch control and anti-wheelie control to be deactivated, but cruise control remains operational, as does the My Ride smartphone connectivity. 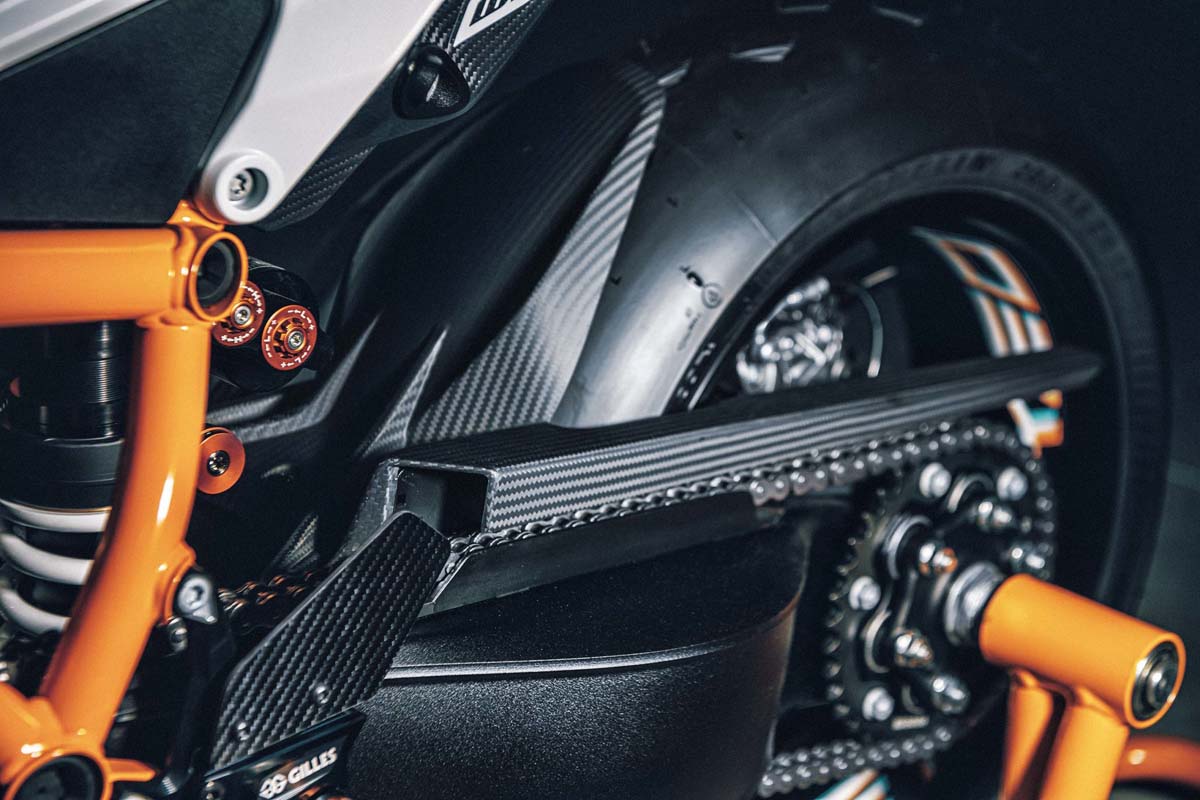 Track mode allows similar levels of customisation to Performance, but deactivates the cruise control and My Ride, while also prioritising the display information on the 5-inch TFT dash to minimise distractions when on the track. 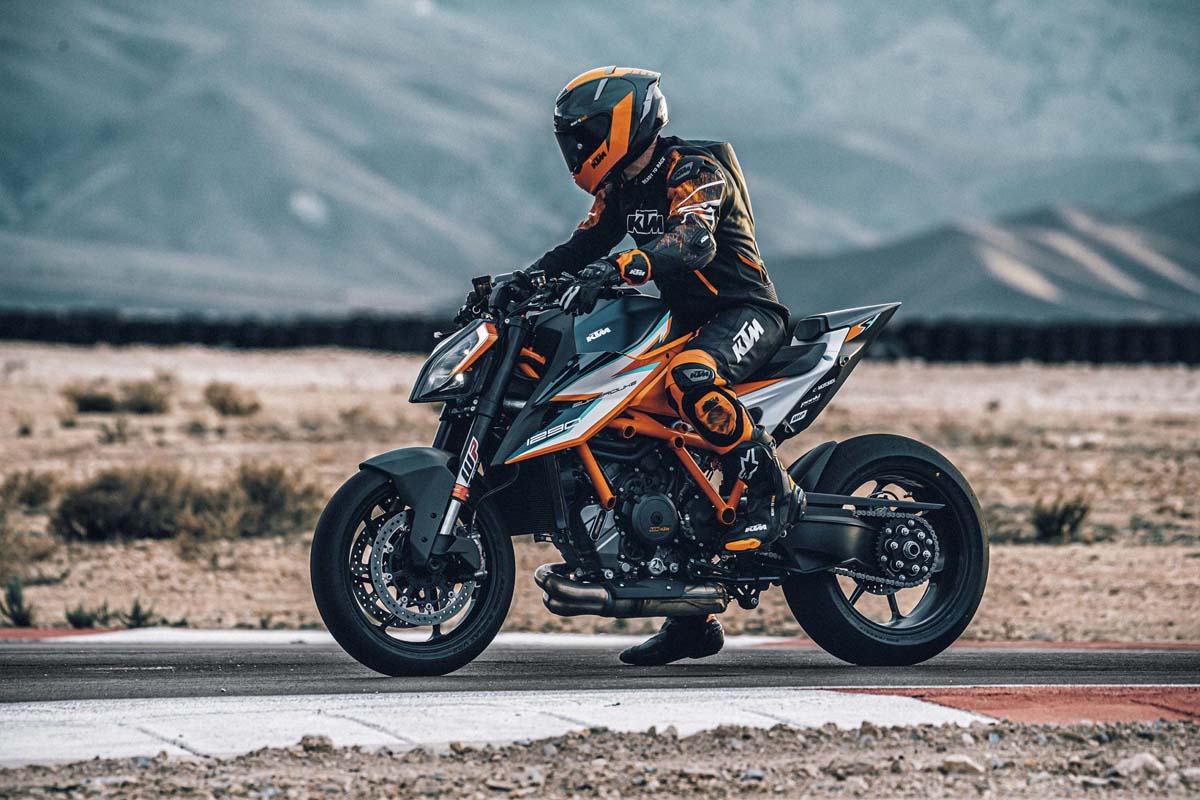 The Supermoto ABS feature, which deactivates ABS on the rear wheel for stoppies and cornering slides, carries over from the R, as does the Motor Slip Regulation (engine braking control), Tyre Pressure Monitoring System and auto-cancelling indicators.

Keyless starting using the Race On transponder fob is standard, too, and all lighting is LED.

To allow riders to get the ideal position, there are a number of ergonomic features from the 1290 Super Duke R that have been carried over to the RR, including four-position adjustment on the 720mm handlebar, easy-to-operate buttons for the TFT dash on the left-hand switchgear, twelve-position adjustable footpegs and adjustable brake and clutch levers, although a brake lever guard is a new feature. 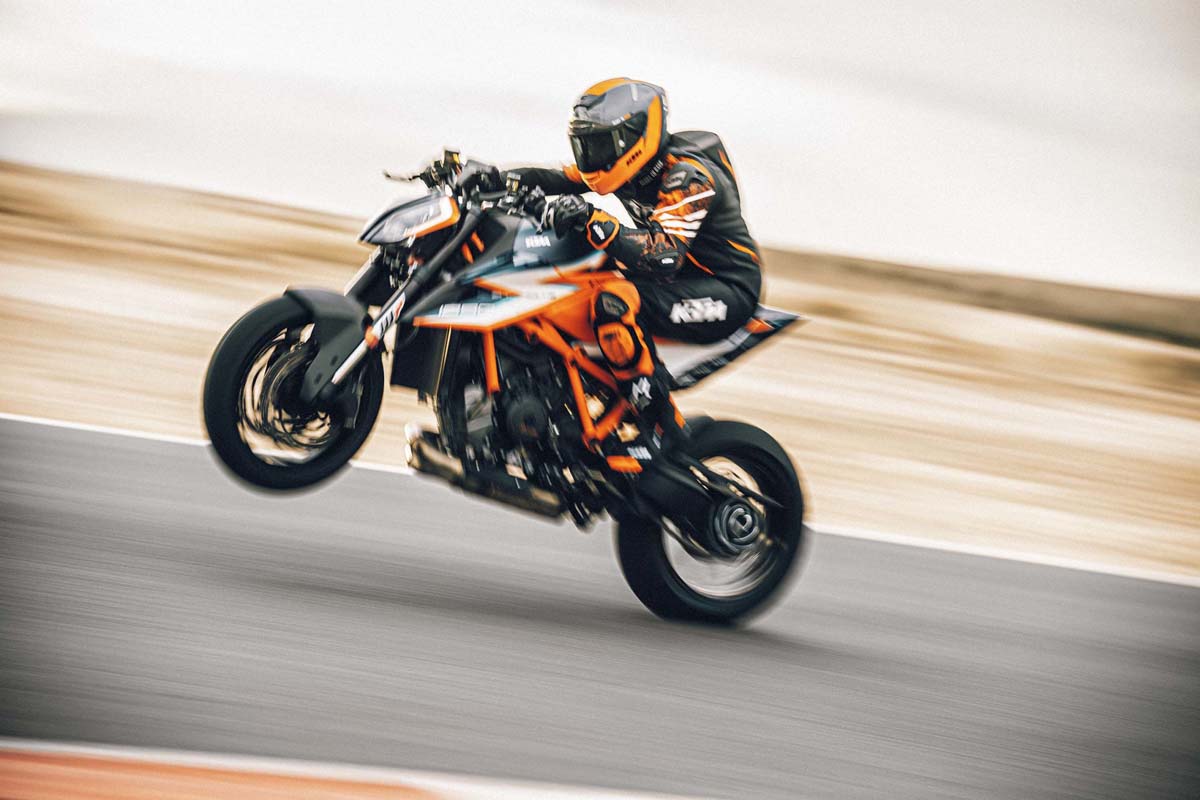 The RR’s seat sits 10mm higher than the R, but with the height adjustment on the rear shock, this can drop down to 835mm – the same as the R. The seat itself is new, offering what KTM says is maximum grip, while still providing adequate movement and comfort. 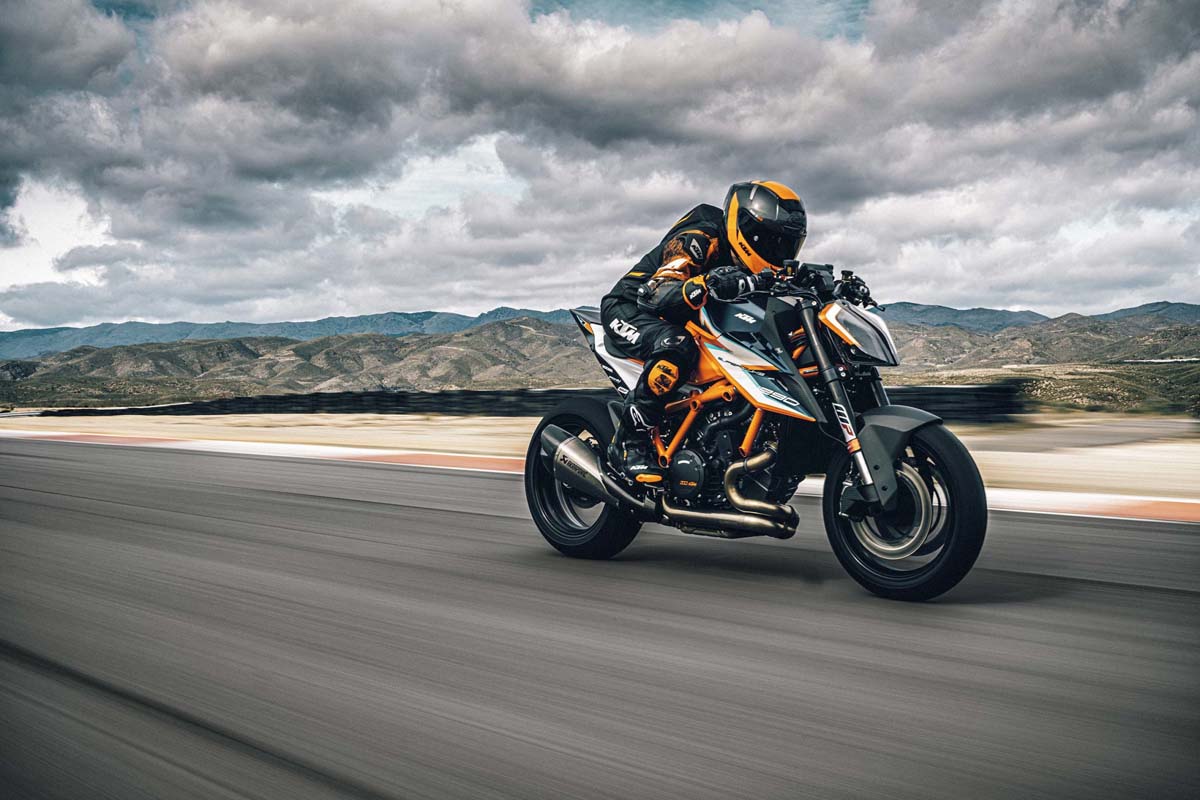 While it’s still identified by signature KTM orange, the 1290 Super Duke RR does add some unique cosmetic features, including raw carbon fibre, while the radiator shrouds and upper section of the fuel tank feature a new take on the ‘R’ graphic with an overlay in white, orange and pale blue to create a ‘RR’ look. 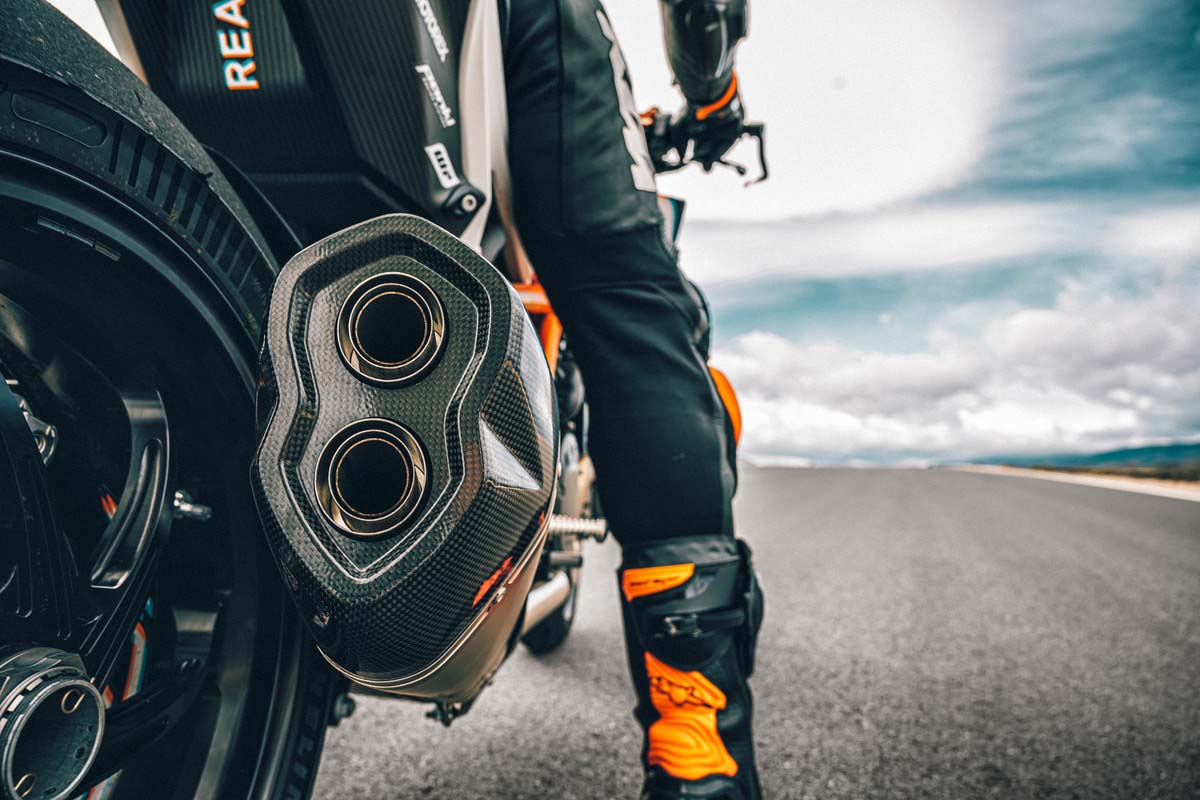 There’s more prominent WP identification on the forks, which along with “partner” logos on the carbon subframe, giving the RR a race bike look.

A blackout finish on the new 7-spoke rims and the distinctive tint on the exhaust system are other appearance features of note.

To ensure the RR’s exclusivity, only 500 units were being produced for worldwide release. Australia’s allocation was a handful of that, so it was no surprise when the local allocation sold out after pre-ordering launched on 13 April. This was despite a hefty $38,400 price tag.

While local allocation of the 1290 Super Duke RR has already been snapped up, if you’re super keen on getting your hands on this bike, you can add your name to the wait list at an authorised KTM dealership . . . and cross your fingers!