What’s better than doing a BMW GS Safari? Doing one with your family!

Why would you do a BMW GS Safari? It’s a question I’ve been asked often. And, after dropping bikes in creek crossings, repairing innumerable punctures, plowing through bulldust or just being exhausted on past Safaris, it’s a question I’ve often asked myself! 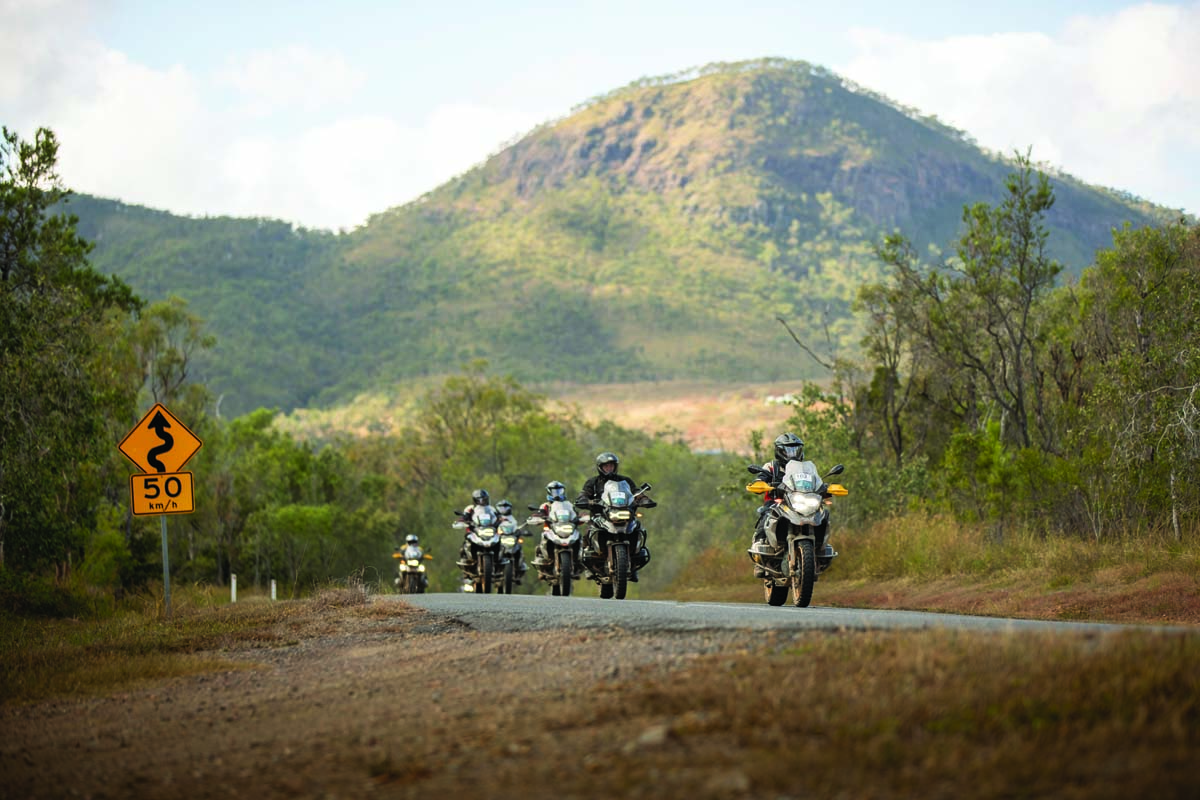 But, for all its travails and challenges, the simple answer is that you do a BMW GS Safari because it’s awesome. If you own a BMW adventure bike and have never done a Safari, you really need to put it on your bucket list. 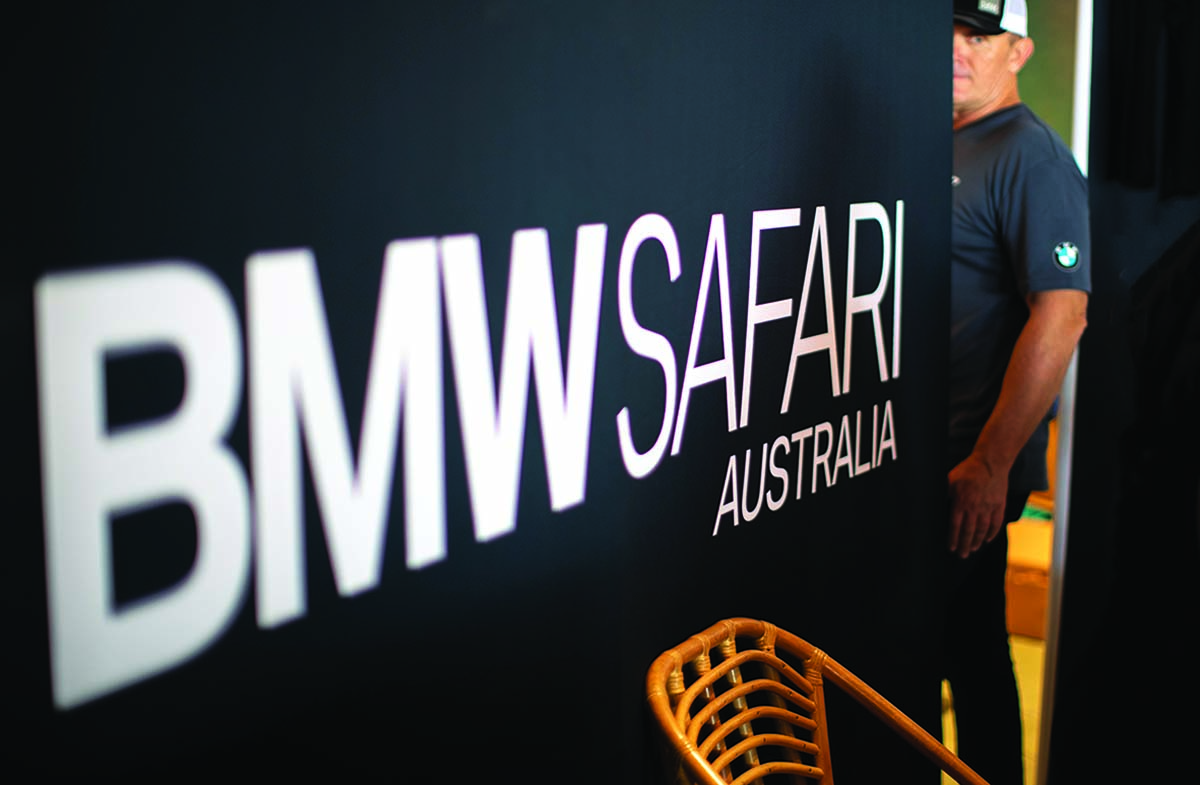 And now, with so many of us in lockdowns and losing freedoms we used to take for granted, adventure rides like this are more treasured than ever – either ones we’ve done previously, or ones we’re looking forward to doing in the future.

Earlier this year, I had the chance to do the BMW GS Safari ‘Tropicana’ – a five-day ride from Townsville to Cairns. It wasn’t my first Safari, but it was the first for my father and brothers. We got to do it together and that made it extra special.

To give you a little background on me, I'm a director of 4K Automotive, one of Australia's leading automotive groups that includes Macarthur BMW and South Coast BMW, as well as MG, Toyota, Lexus and Volkswagen dealerships in the Campbelltown region and Wollongong, plus a prestige panel beater.

While 4K Automotive is a big operation, it’s also a family one, with myself and my brothers - Kurt, Kane and Klint - all involved in various operations across the different dealerships. At the helm is my dad, Mario, who has more than 30 years’ experience in the auto industry and was a big driver in taking 4K Automotive to where it is today. 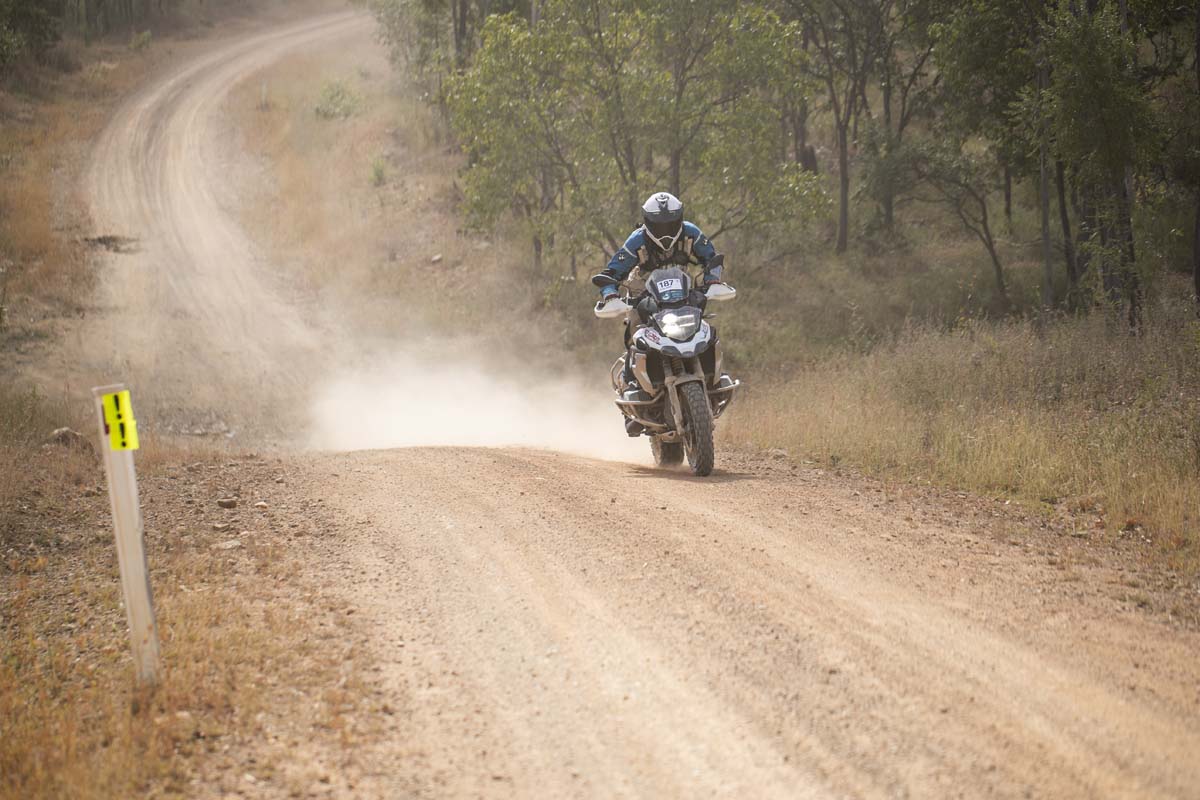 As far as motorcycles go, our family’s connection to bikes goes back a long way. Mario was always a lover of motorcycling and he passed that love on to us boys. Some of my earliest memories are of dad coming home on a new bike and taking us for rides around the block of the family home in Bundeena.

When we were old enough, dad started to get us into dirt bikes, which all four of us took to quickly. And when dad bought some land in Bungonia near Goulburn, my brothers and I would let rip there. We spent many years going to different tracks over the years. We didn’t realise it at the time, but motorcycles were what bound us together in our younger years.

It was only a matter of time before we were looking to progress to road bikes. Unlike the dirt bikes, dad was very hesitant at us taking that step, probably thinking the streets were too dangerous. If he’d seen what sort of foolhardy stuff we’d done on our dirt bikes, he should have been more worried about that!

Anyway, with a fair bit of persuasion (there were four of us, after all!), dad relented and we all made the transition to road bikes. Dad then started to ride with us on occasion. As a family, these group rides were always enjoyable, but as 4K Automotive expanded and myself and my brothers started our own families, those rides became less frequent.

While myself and the rest of the Kordovolos clan are rusted-on motorcycle fanatics, Japanese bikes and Harleys had always been our rides of choice. That changed in 2016 when we purchased a BMW Motorrad franchise – Macarthur BMW – in Narellan that combines BMW and BMW Motorrad dealerships under the one roof. 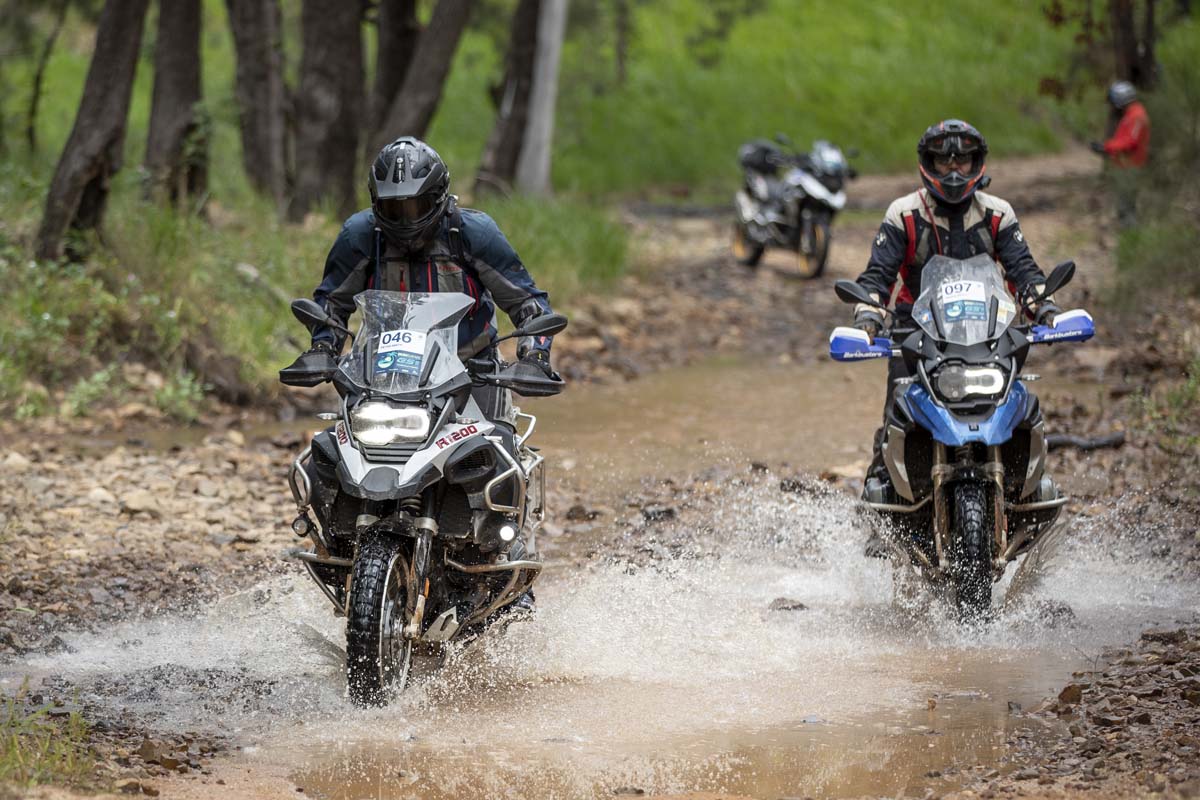 Robert Gimbert was one of our initial sales staff and he was the one who convinced me to part with my Yamaha R1 and try out a BMW. I fell in love with the S 1000 RR, but Robert wanted me to try out something from the GS Adventure range and offered me his spot in an upcoming BMW GS Training weekend run by Shane Both and Chris Urquhart. 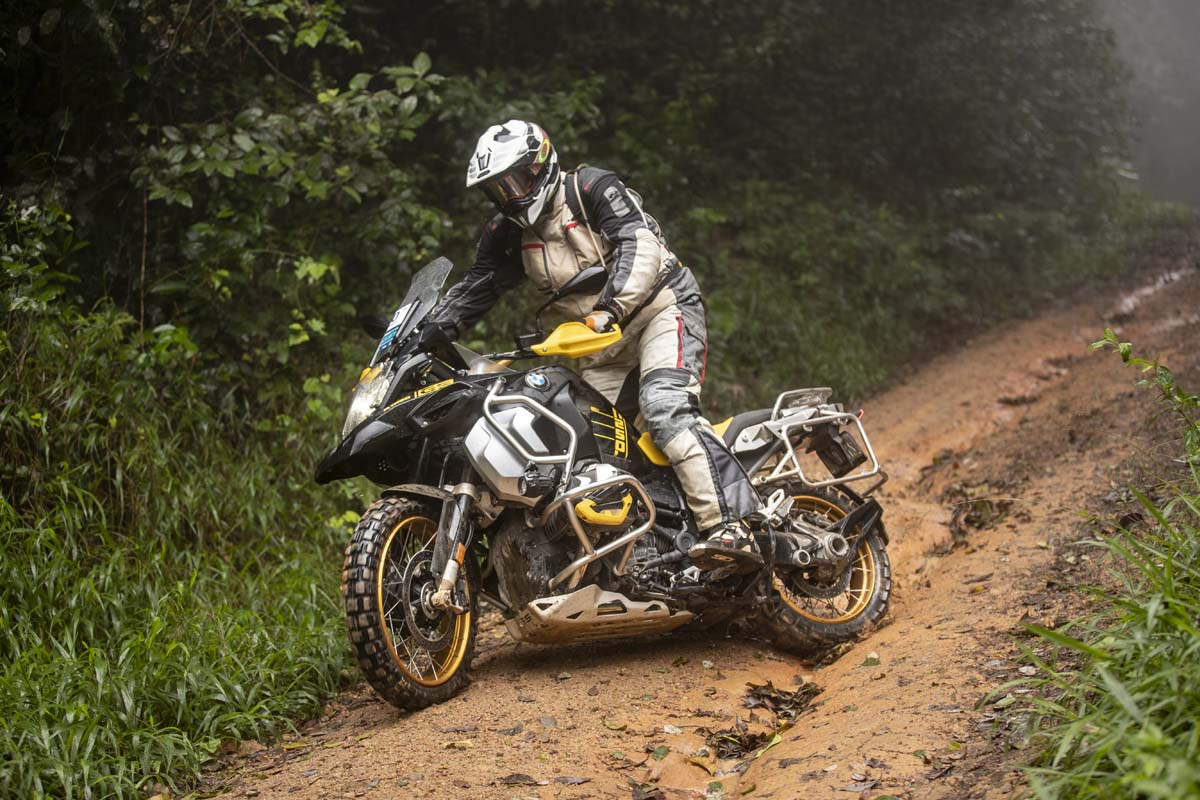 I was skeptical and remember saying that you can’t ride a big bike like that in the dirt and still have fun, but Rob persisted and I’m glad he did. I soon found that the GS range are amazing machines, specifically the 1250 GS, which can do things I thought would be impossible on such a heavy bike. 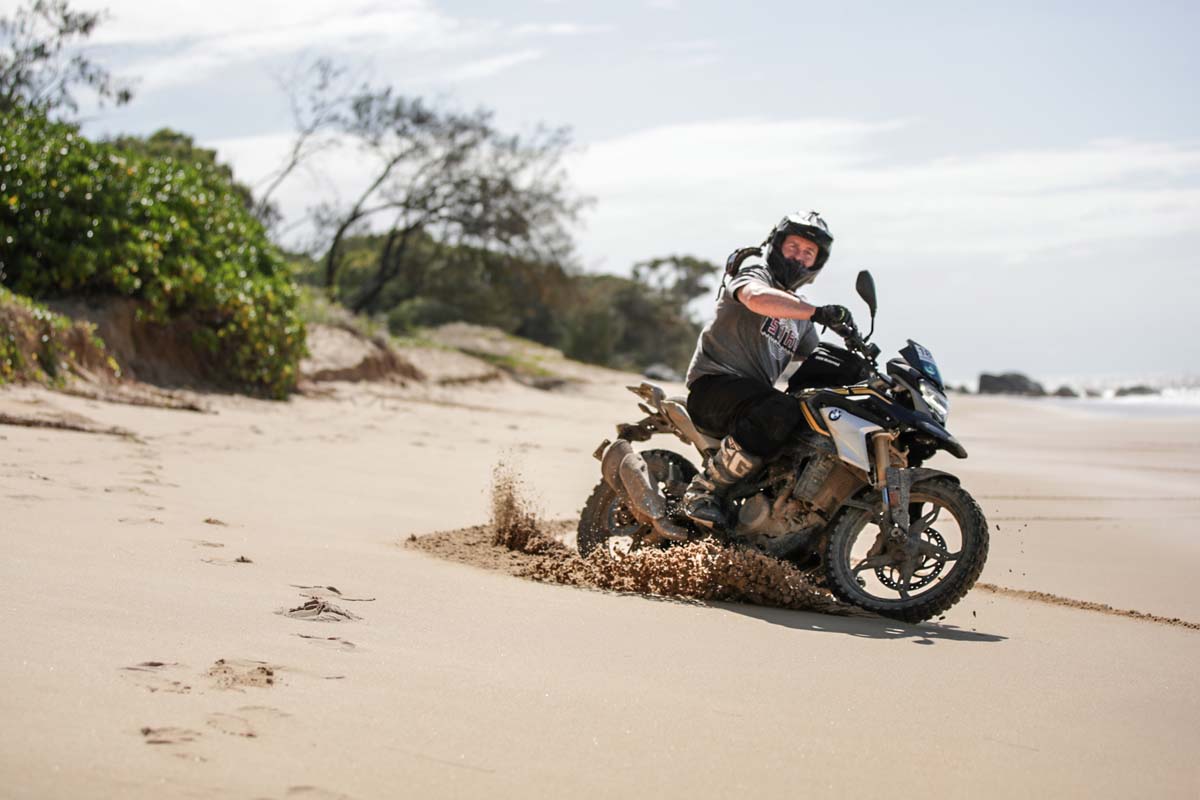 With Shane and Chris’s guidance, plus the experience I’d spent haring around on dirt bikes in my youth, I took to the 1250 GS quickly and developed a new love for motorcycling. 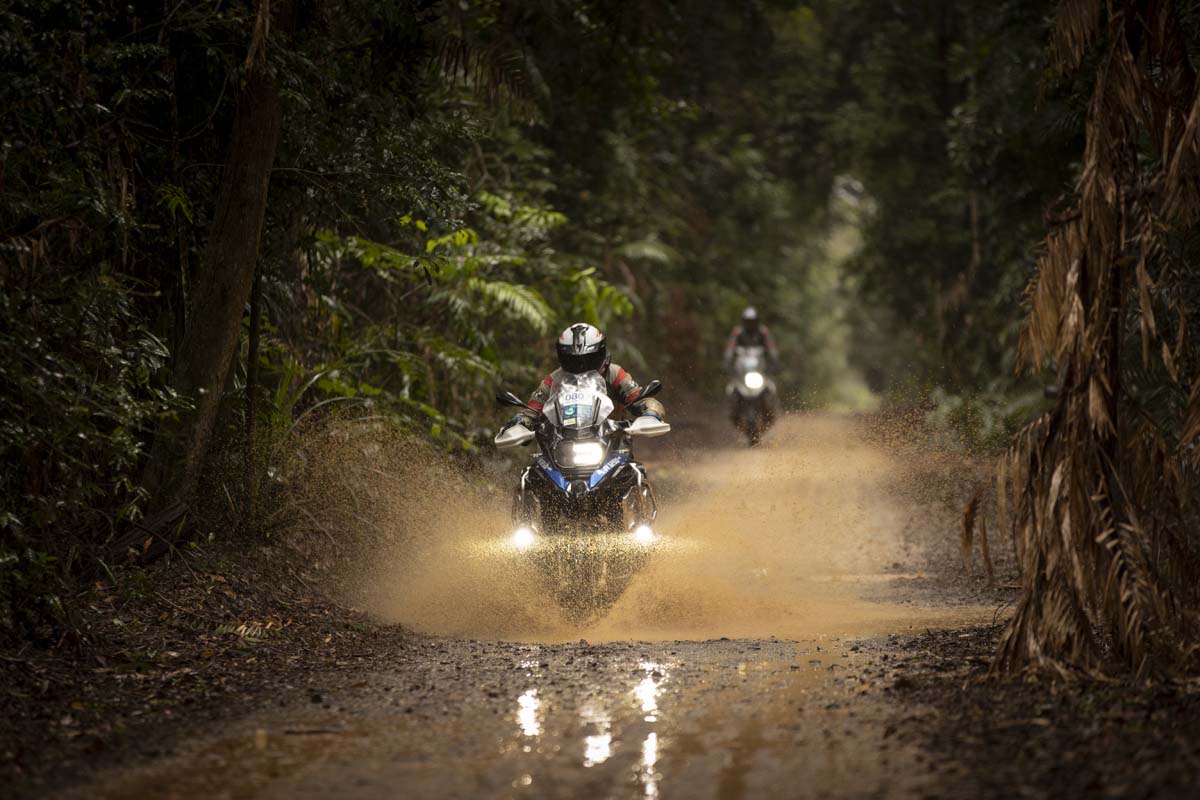 Following that training weekend, I bought my first R 1250 GS, decked it out with BMW Motorrad accessories and booked in for my first GS Safari. 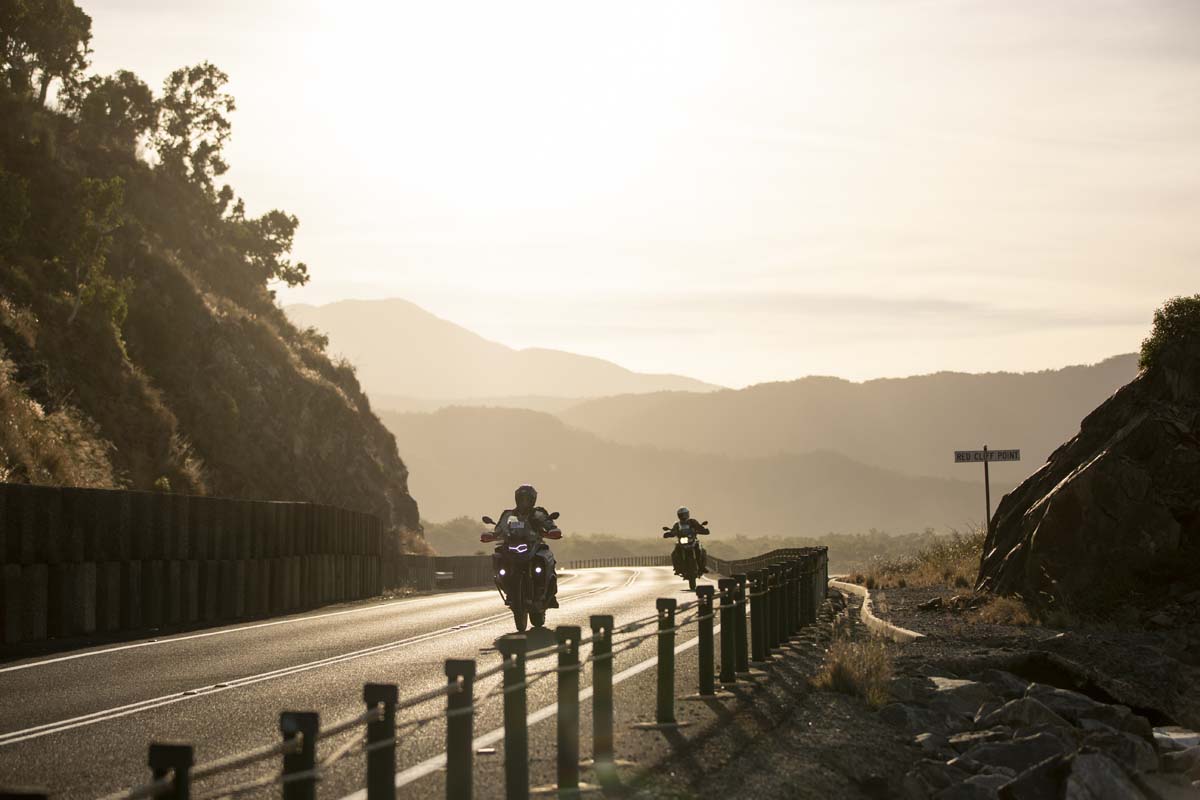 Of those initial events that I did with the team at Macarthur BMW Motorrad, the Safari GS Enduro Mildura-Alice Springs in 2019 was a highlight. It was cold and hot, with all sorts for different riding along the way, but I learnt so much on that Safari and it made me a significantly better rider. 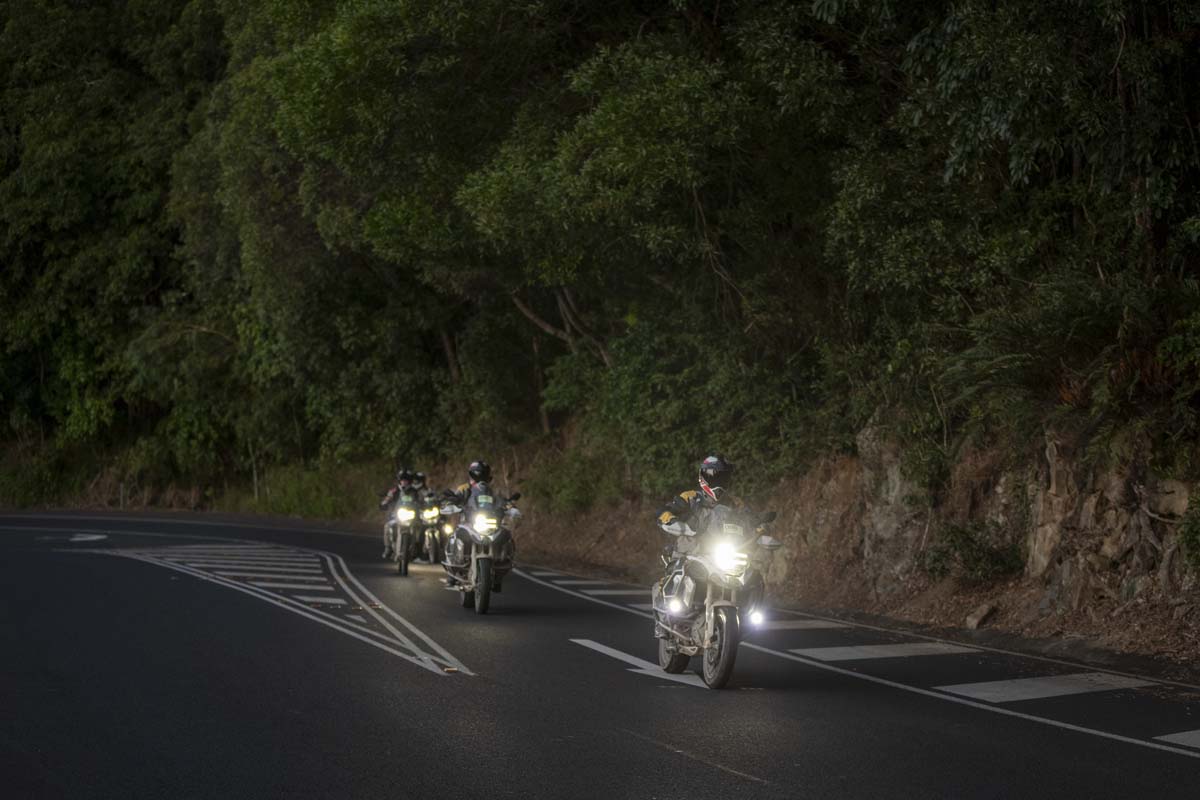 For me, the GS provided what I’ve been missing for so long – a wonderful mix of road and off-road riding.

So, being a fully-fledged convert to GS-ness, I started working on my father and brothers to join me for a future Safari. It took some doing, but I eventually convinced them to get hold of a new 1250 GS each and join me on this year’s GS Safari Townsville-Cairns.

Thanks to our BMW connections, we were able to call on Chris Urquhart to give us some one-on-one tuition ahead of the five-day Safari in May. Reflecting my own experience on that training weekend a few years back, both dad and my brothers adapted to the GS quickly. After that training and a couple of short rides together, I felt confident that they’d be able to handle the rigours of a Safari. 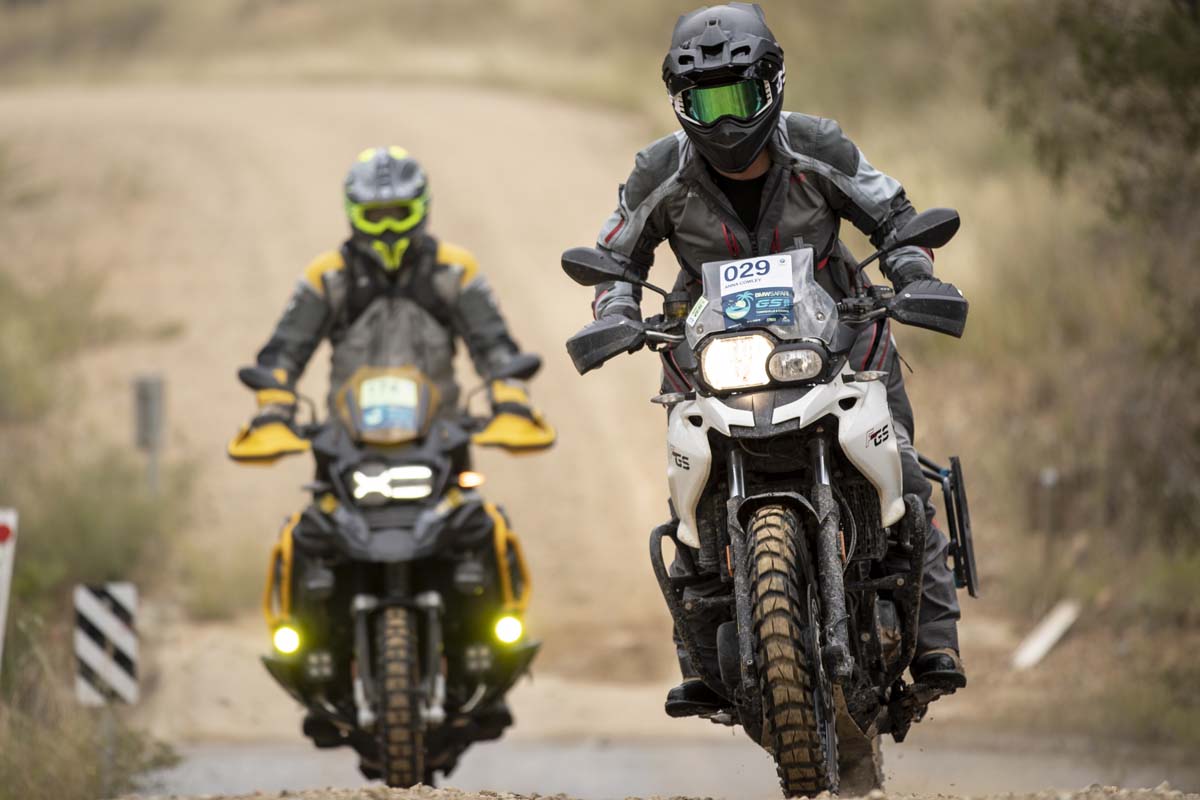 While the GS Safari is a fully supported event, with luggage, mechanical and medical back-ups, as well as lead and sweep riders, it’s not easy. A day’s route might consist of 450+km of riding and the majority of that is usually off tarmac, with some truly challenging sections dictated by the environment, be it sand, mud, water crossings or rutted tracks.

That being said, I think the challenge of the Safari would help bring the family together again, just like those bush rides we did as kids so many years ago. 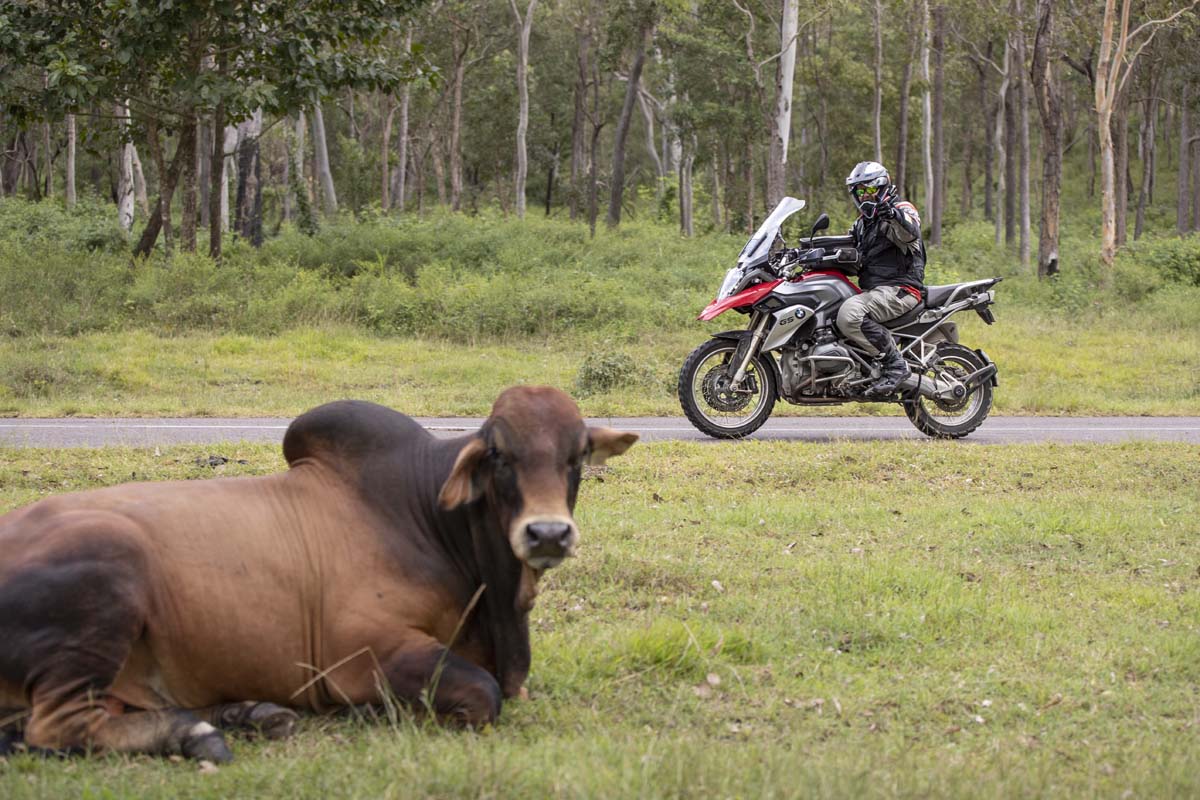 Given that the 2021 BMW GS Safari Townsville-Cairns was the first for my brothers and father, I could tell they were nervous about what to expect. I could draw on my past Safari experience to share with them and we were all heartened to see other father-son and sibling groups on this Safari, too.

Our adventure started at the luxurious Jupiter’s resort on the Townsville waterfront, with check-in, welcome dinner and rider briefing. It was a relaxed and fun start, as well as a great chance for dad and my brothers to collect hints, tips and experiences from other riders.

Day 1 for the 180+ entrants in the GS Safari Townsville-Cairns started at dawn with a 467km route that headed inland then north to finish at Mission Beach.

Apart from a few easily-negotiated creek crossings, conditions were dry on the dirt tracks and quiet rural roads, so it was a good opening day for dad and my brothers. I think they were reassured by the gentle route, as well as the fact there were other first-timers on this Safari, too. Everyone was taking it easy, keeping an eye out for each other and ready to lend a hand. As mentioned, there’s a full BMW support crew that have your back, too.

Day 2 would up the ante a little, with some harder dirt sections and water crossings through the Atherton Tablelands and a section of the old Palmerston Highway on a 387km route to Port Douglas.

Seriously stormy conditions in the morning meant we got soaked through, but in the Queensland humidity, you dry out just as quickly. Slick roads through the rainforest for part of the route meant you did need your wits about you, but there were ample opportunities to enjoy the scenery along the way.

That was the case with every day on this GS Safari. It’s not about getting from Point A to Point B as fast as you can, or being laser-focused on the road ahead – it’s about enjoying the ride while challenging yourself and the GS underneath you.

After a debrief and dinner at the Sheraton Mirage in Port Douglas closed out Day 2, it was another early start on Day 3, which was a 169km loop section, circling the Kuranda State Forest before returning via the coast to Port Douglas.

Once again, wet conditions made the day a challenge, particularly for those taking on the harder alternate route, swelling the creek crossings and making the dirt and clay tracks seem like ice. We all got through it, but dropped our bikes at least once over the course of the day. It was a hard day and an amazing one, but I reckon dad was relieved this was only a short one!

Day 4 was a 434km route that took us into the Daintree then west before finishing at Palm Cove, north of Cairns. The scenery was truly amazing and the water crossings truly exhilarating – when you conquered them without falling or stalling!

Gathering at The Lion’s Den Hotel, which seemed like it was in the middle of nowhere, but actually just north of Rossville, provided a welcome opportunity for some R & R before taking on some more off-road adventure on the Bloomfield Track before heading down to Palm Cove.

This penultimate day was tough, but I was enjoying it and my brothers were, too. I think, by this stage, they were really starting to “get” the whole GS Safari experience, so the final day would be bittersweet, knowing that what we were enjoying so much was about to end.

Day 5’s route went deep inland and hit familiar territory at Irvinebank on the way back to the coast for the finale at Cairns.

How quickly conditions can change up north was evidenced by mostly dry and dusty conditions through the final day’s 326km route, but the Safari organisers ensured we still had a water crossing or two. Flanked by bush, banana plantations and scrub, it was a fairly gentle day, punctuated by some steep and rocky tracks to keep us on our toes.

A gala dinner at the Shangri-La resort in Cairns on 28 May capped the 2021 GS Safari Townsville-Cairns, and after five tough but great days, I reckon a beer’s never tasted so good!

In terms of my goal of uniting myself, my brothers and my dad and rekindling our passion for bikes, this GS Safari achieved that superbly. Sure, we could have done other group rides to bring us together, but I think the GS Safari does this in a unique way and certainly one that I haven’t experienced before. 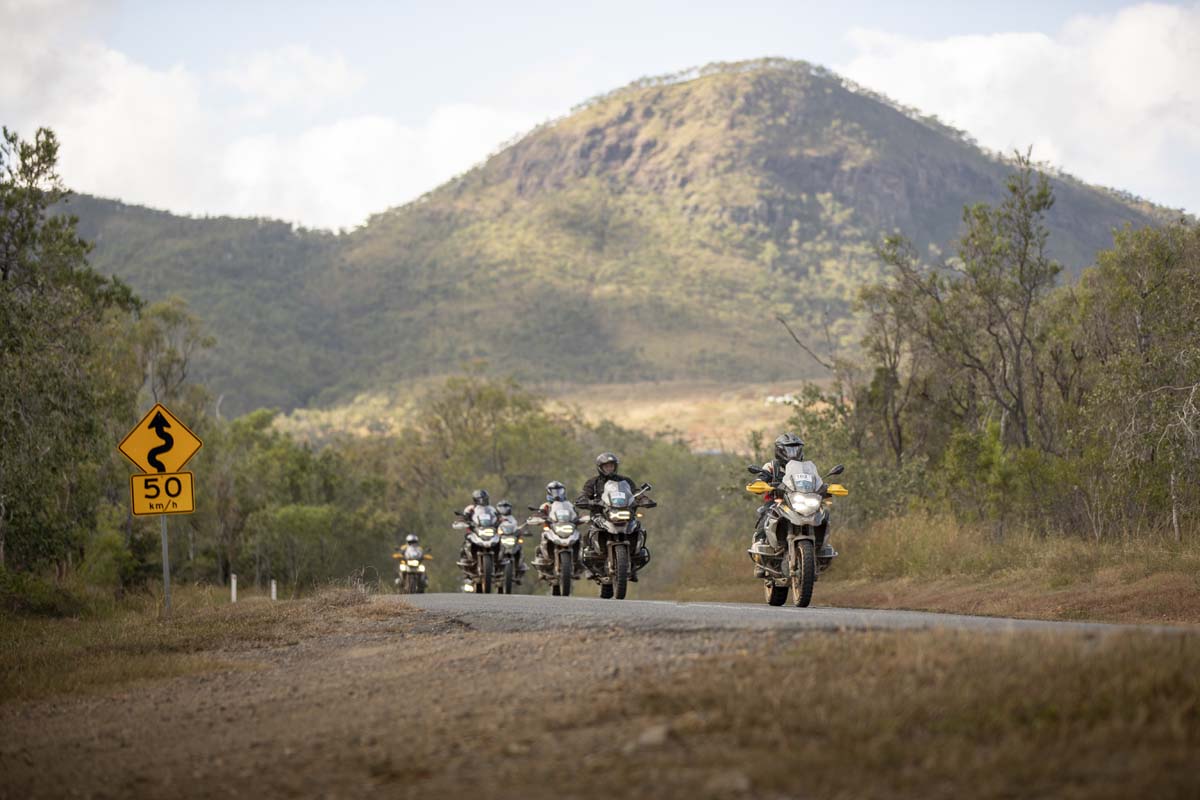 We had to help each other through the long days and come together in many places to get through the route – and that was a good thing.

For the Macarthur BMW Motorrad side of things, I think it’s given me a better connection to customers, as I can recommend a GS Safari based on experience. We’ve won BMW Motorrad’s Australian Rural Dealer of the Year award two years running and I think our participation in these Safaris has been part of that. Our engagement with BMW owners through these Safaris marks how important it is to be involved in these things and how BMW brings people together.

Now, my three brothers have all sold the bikes they previously owned and ordered an R 1250 GS Adventure each. They want to keep riding and doing more GS Safaris together, so I can’t wait to sign up for the next one!